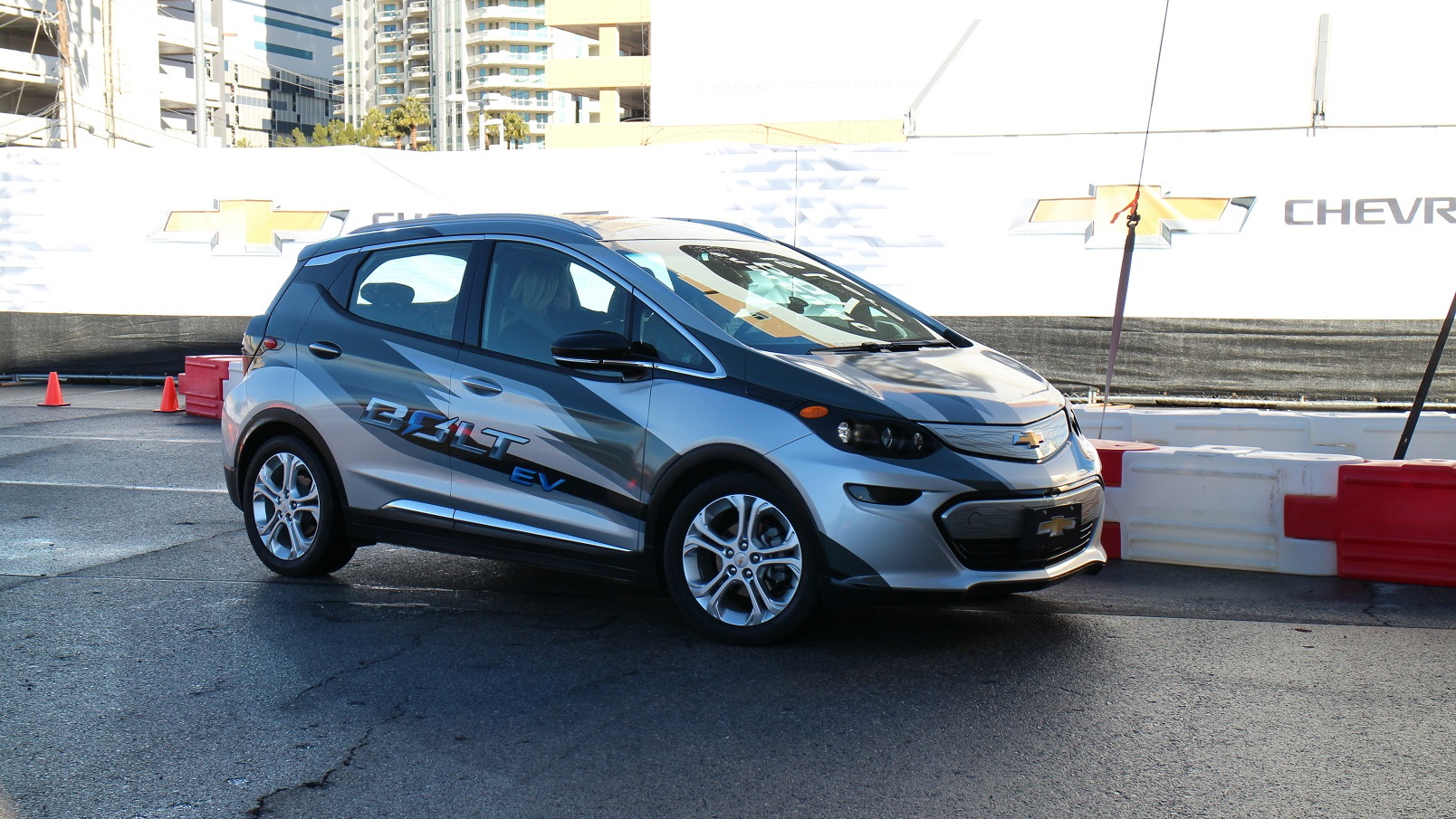 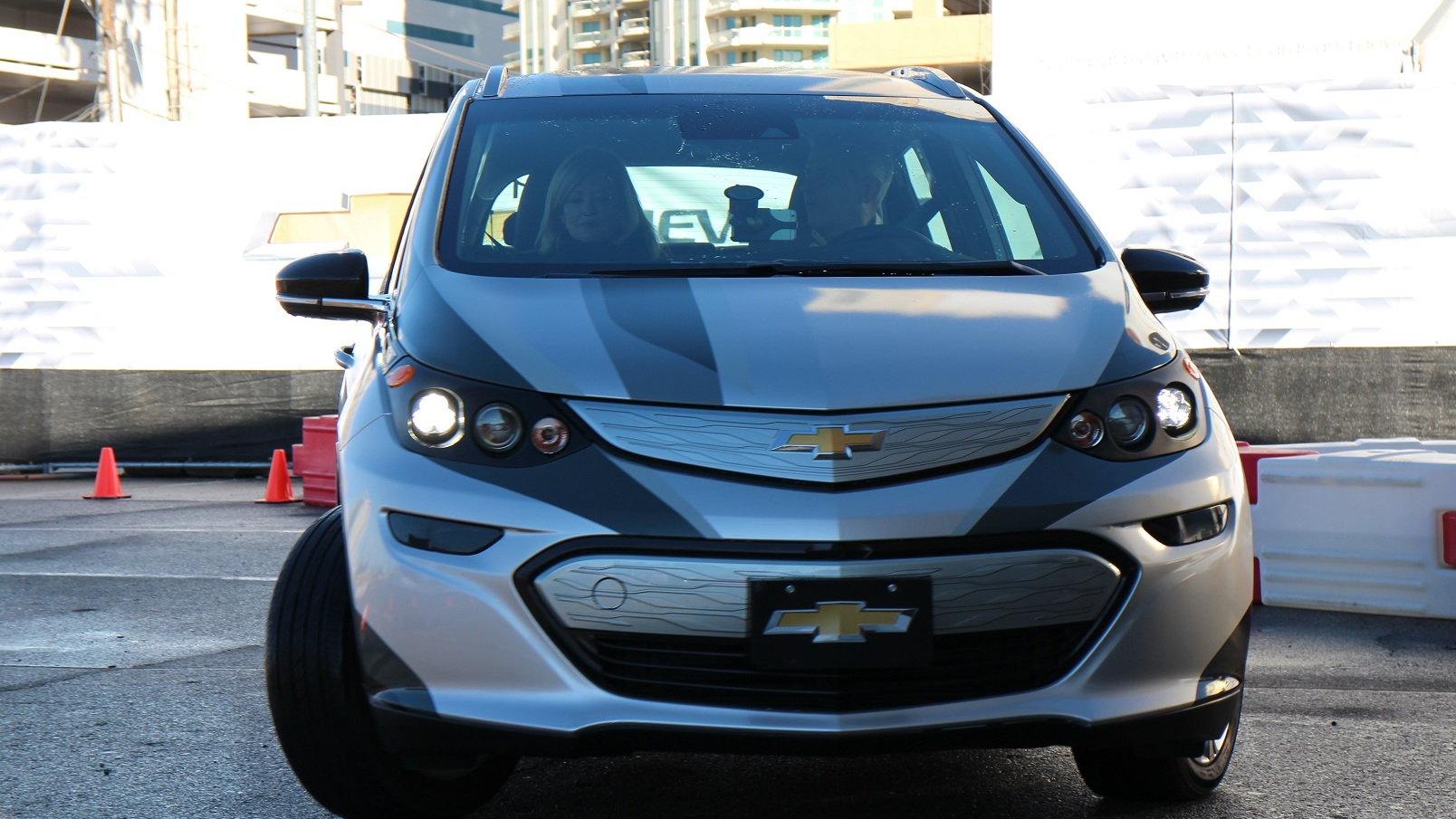 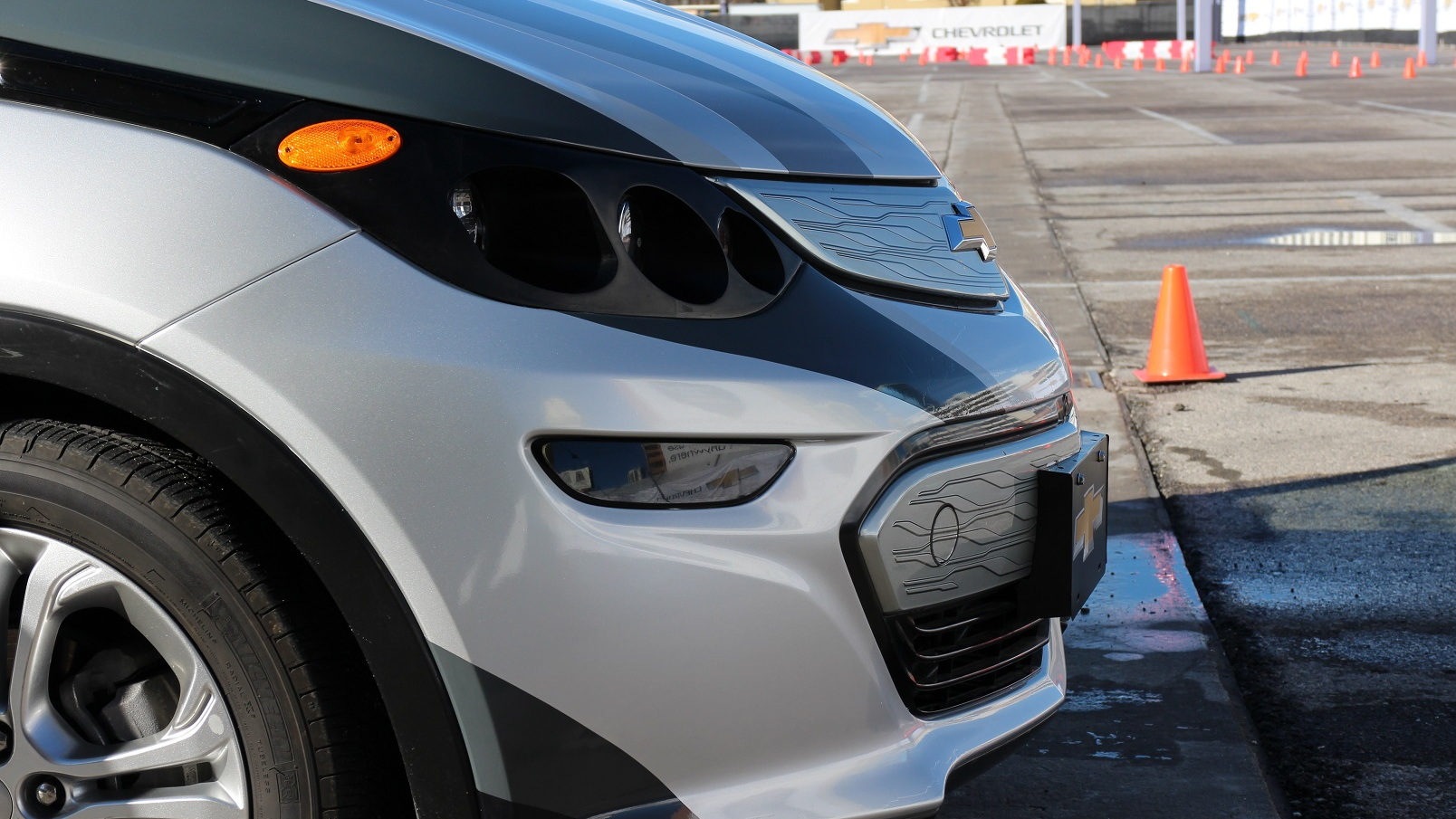 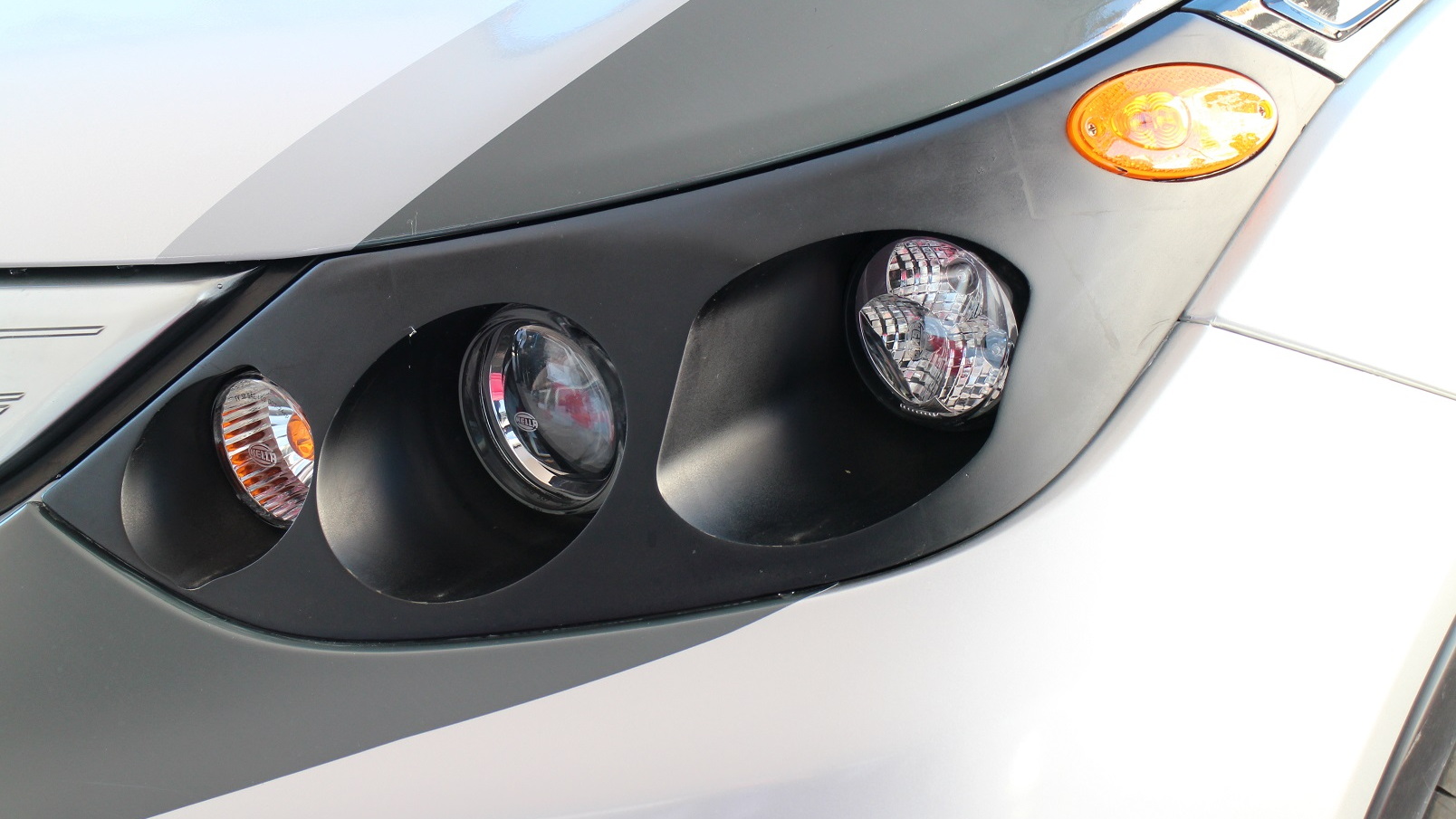 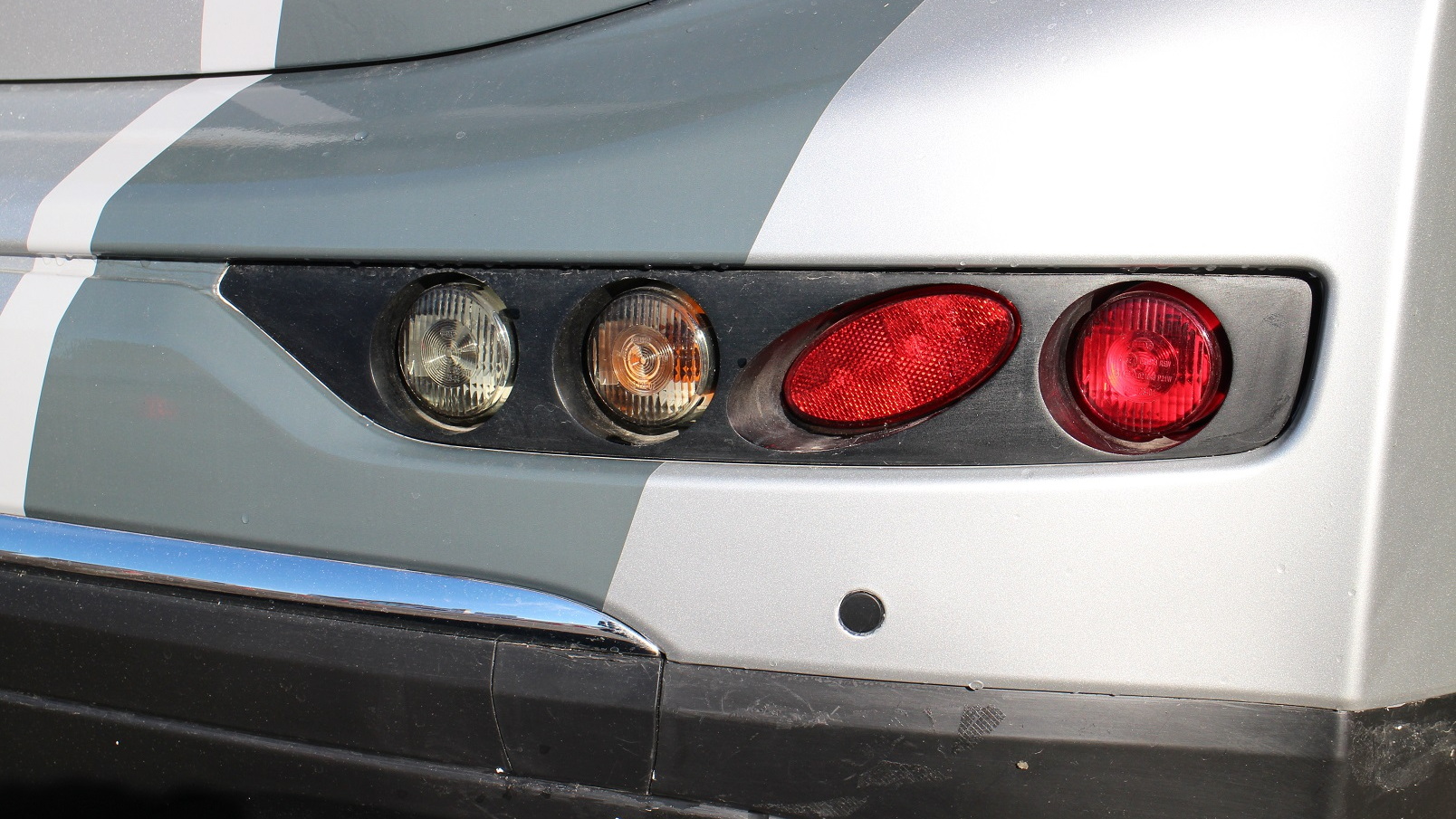 If the production version of the 2017 Chevrolet Bolt EV lives up to the engineering development vehicles we saw and drove today, it will debut a new world of affordable, 200-mile electric cars that should be desirable to a broad mass market.

Back in 2010, Chevy let journalists drive "integration vehicles" built to test the latest versions of software in the upcoming Volt range-extended electric car.

GM's Bolt EV team is clearly as confident in their car as the Volt team was back then, so that's what we got to drive and ride in.

Compared to the latest Nissan Leaf, the 2017 Chevy Bolt EV will offer about twice the range, at least the same amount of passenger space, and a vastly more modern interior--for roughly the same price.

The silver "IV-er" Bolt EV we drove on a Las Vegas parking-lot course screened from the public had various angled black stripes that mildly camouflaged its lines.

But it's clearly the car whose uncloaked spy shots we published in December with a shape similar to last year's Detroit Auto Show concept, an upright five-door hatchback with a blunt nose and very short front and rear overhangs.

In fact, said Bolt EV chief engineer Josh Tavel, the car has the shortest overhangs of any vehicle in GM's global lineup.

And although it'll be built in the same Orion, Michigan, assembly plant as the next-generation Sonic subcompact, the Bolt EV rides on its own dedicated platform.

Some suspension components may be shared, but the body structure and underpinnings--built around a flat battery pack under the floor--are unique.

The lack of an engine and transmission up front required some innovative crash engineering in the stubby nose, Tavel said, with a lower cradle that holds the traction motor and driveline, and an upper cradle containing the power electronics.

Each is attached at four different points, and both went through multiple design iterations to provide the needed frontal and transverse energy transfer and absorption to allow the car to earn the highest safety ratings--which GM is confident it will.

The nose has a Volt-like silver "grille" blanking panel, flanked by light units that wrap around and sweep most of the way back to the base of the windshield posts.

A larger opening below provides air intake, and gives the entire car almost a smile on its front face. The lights on our test car were not the final units, however, which will have clear, flush covers.

The body crease sweeps up toward the rear, with the bottom of the window line climbing even higher at its back end. The rear has a relatively vertical hatch opening onto a spacious load bay with 16.9 cubic feet of cargo volume.

There's no spare tire, but neither is there an inflator kit; the electric Bolt will be the first car on the market to use the latest development of Michelin's self-sealing tire technology.

Unlike run-flat tires, these seal around any nails or other small punctures, which the owner will only learn about once the tire is replaced.

Inside, the cabin is light and airy, with remarkably thin front seats that provide an extra inch of rear legroom. Four adults can sit comfortably in the car, though the "five-passenger" description is pushing it.

Passenger volume is 94.4 cubic feet, against 92.4 cubic feet for a Nissan Leaf and 94 cubic feet for the much larger Tesla Model S. That volume is "two segments larger" than the car's exterior size would suggest, said Pam Fletcher, GM's executive chief engineer for electrified vehicles.

But while it appears a bit smaller than the Leaf on the road--perhaps due to those short overhangs--the Bolt EV is wide, and the interior space is suitable for long-distance travel by four.

The lack of an engine means that the Bolt EV's designers could move the windshield base down and forward, letting them rake the large glass at almost the same angle as the short hood.

Frontal vision from the driver's seat is exceptionally good, which will make the Bolt easy to park. And both the flat floor and a slim dash and console make the front footwells especially wide.

The seats are comfortable, and all occupants sit upright, and higher than they do in the more rakish Volt.

The dashboard has both a fully digital 8-inch instrument cluster behind the steering wheel and a central 10.2-inch touchscreen display built into the top of the console.

Both have a graphic design quite different from that used in the 2016 Volt and Malibu. The user-configurable displays in the Bolt EV use thin fonts on a bright white background, looking as much like a mobile website for swiping as old-school automotive instruments.

The Bolt EV also has GM's new digital rear-view mirror as standard, so far seen only on the Cadillac CT6 large luxury sedan.

Its rear-facing camera gives a wide 80-degree image in the crisp digital display that replaces the mirror glass, against 22 degrees for a conventional mirror. We did notice some glare off the highly polished surface, however.

We can't comment on the materials inside the production Bolt EV, because our test vehicles had many components made of smooth, untextured black plastic and large parts of the interior covered in black nylon cloth.

The "roads" of our enclosed test course included a long straight, several esses, a pair of right-angle turns, and a U-bend at the end.

The development Bolt accelerated confidently even with four adults in the car; GM quotes 0-to-60-mph acceleration of less than 7 seconds, and was able to chirp the inside front tire under full power out of a turn.

It cornered relatively flat on its 17-inch alloy wheels, and the steering had a nice positive self-centering action.

No motor or electronics whine was audible at any point, and the brake feel was consistent enough that we didn't feel any transitions between regenerative and friction braking in our two laps.

The Bolt EV uses a similar left-hand paddle to the Volt's, which lets the driver increase the regenerative braking rate, but it now has an icon to identify it protruding above the steering-wheel spoke.

Fletcher also provided one of the few surprises in a very short presentation: The Bolt EV will also provide what she called "one-pedal driving" by using the Low position on the shift lever.

Regrettably, we didn't get enough time to duplicate our laps in Low mode, so we look forward to trying it the next time Chevy offers seat time in a Bolt EV.

But the provision of one-pedal driving capability shows that GM has been paying attention to its Volt customers, some of whom habitually run their cars in Low with the Sport mode turned on.

With the 2016 Volt's addition of the variable-regen paddle, the accelerator and paddle together come pretty close to simulating one-pedal driving.

Fletcher did say, however, that GM's one-pedal and regen feel was "our own balance" of what the company felt appropriate--and not necessarily as aggressive as that offered by some competitors.

All of those are necessary elements to "cracking the code to take electric cars mainstream," she said.

Based on our limited drive today, as well as the excellent 2016 Volt developed by some of the same GM engineers, we'd say the Bolt EV has the best shot yet at doing just that.