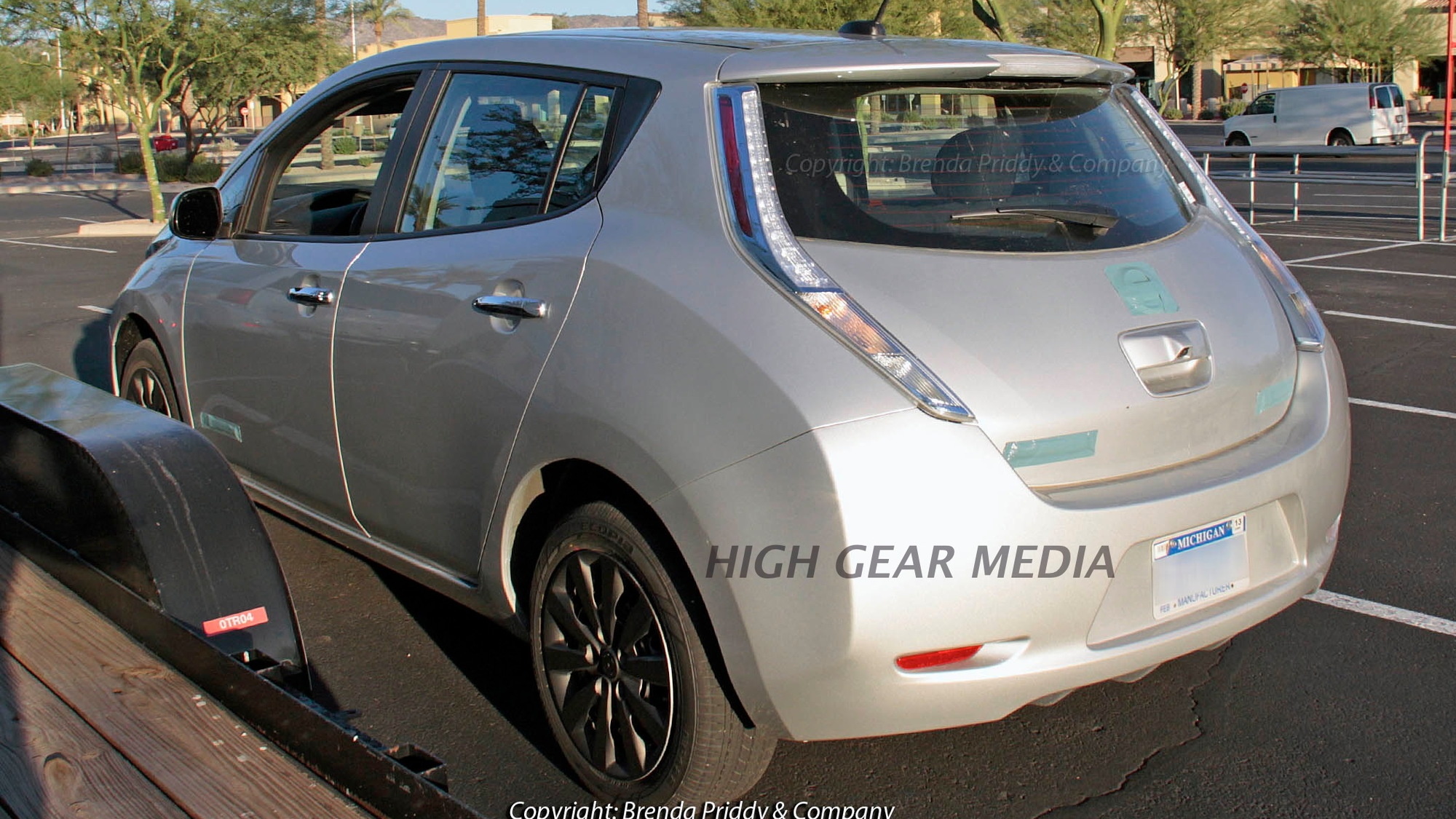 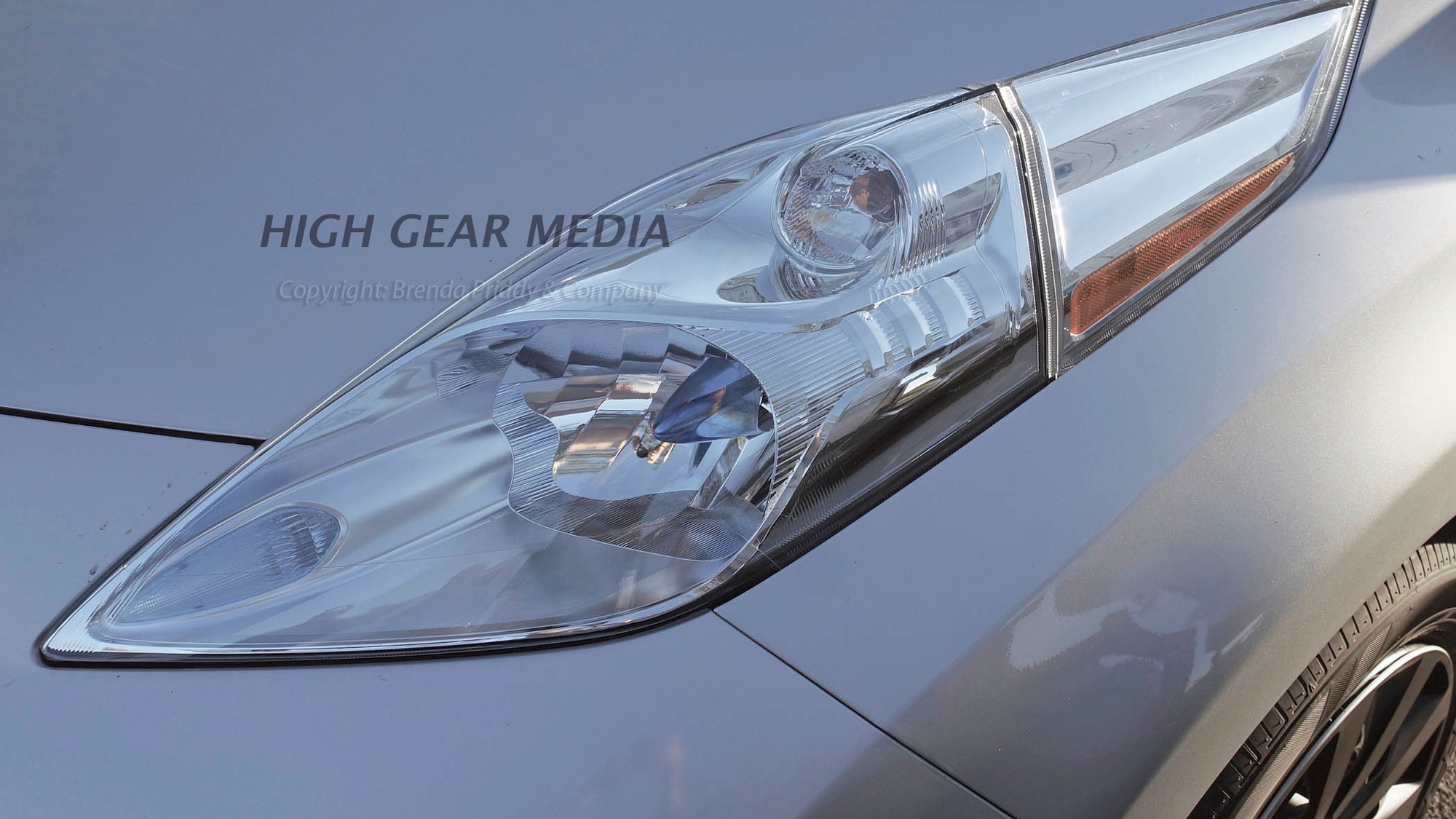 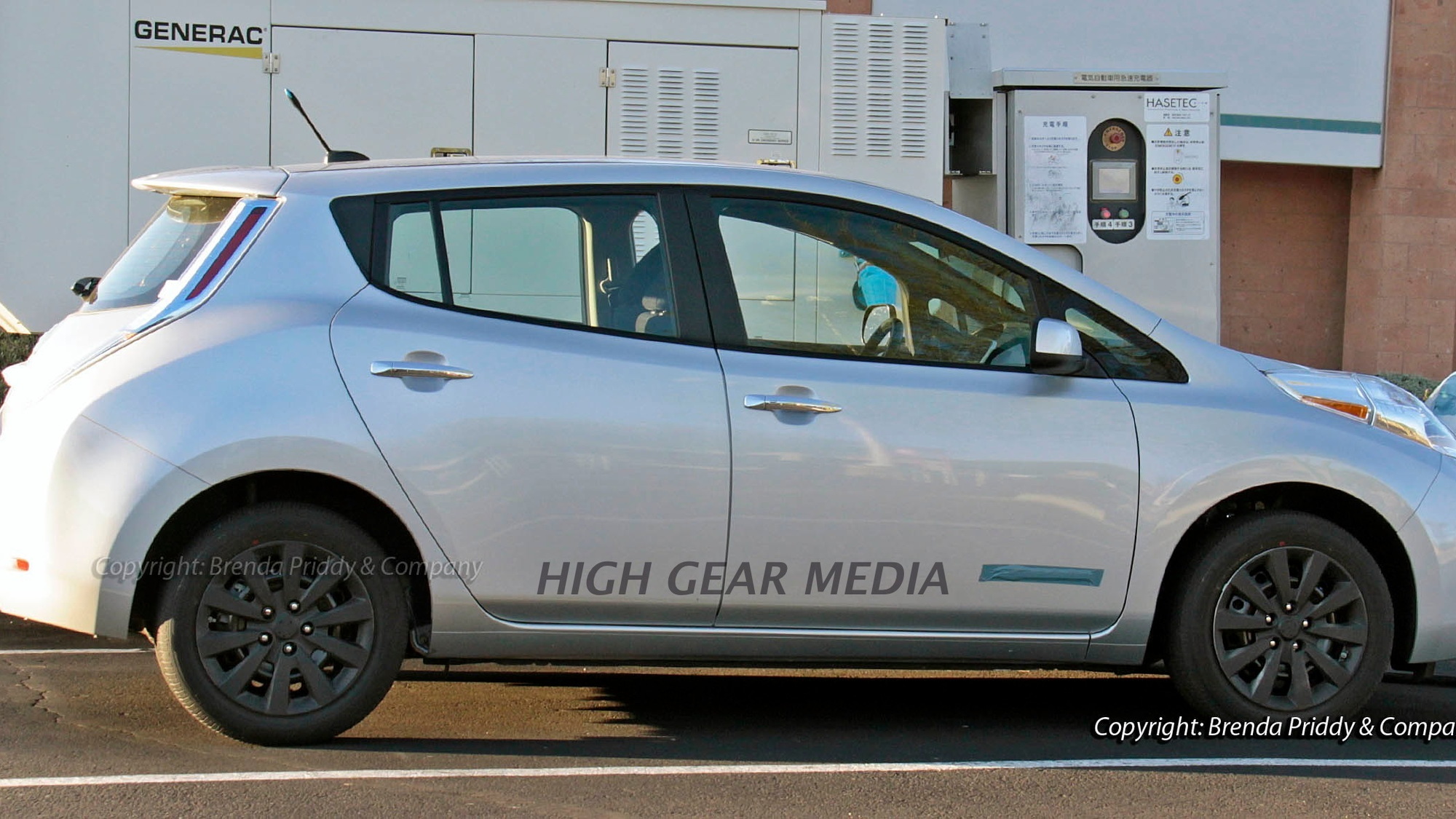 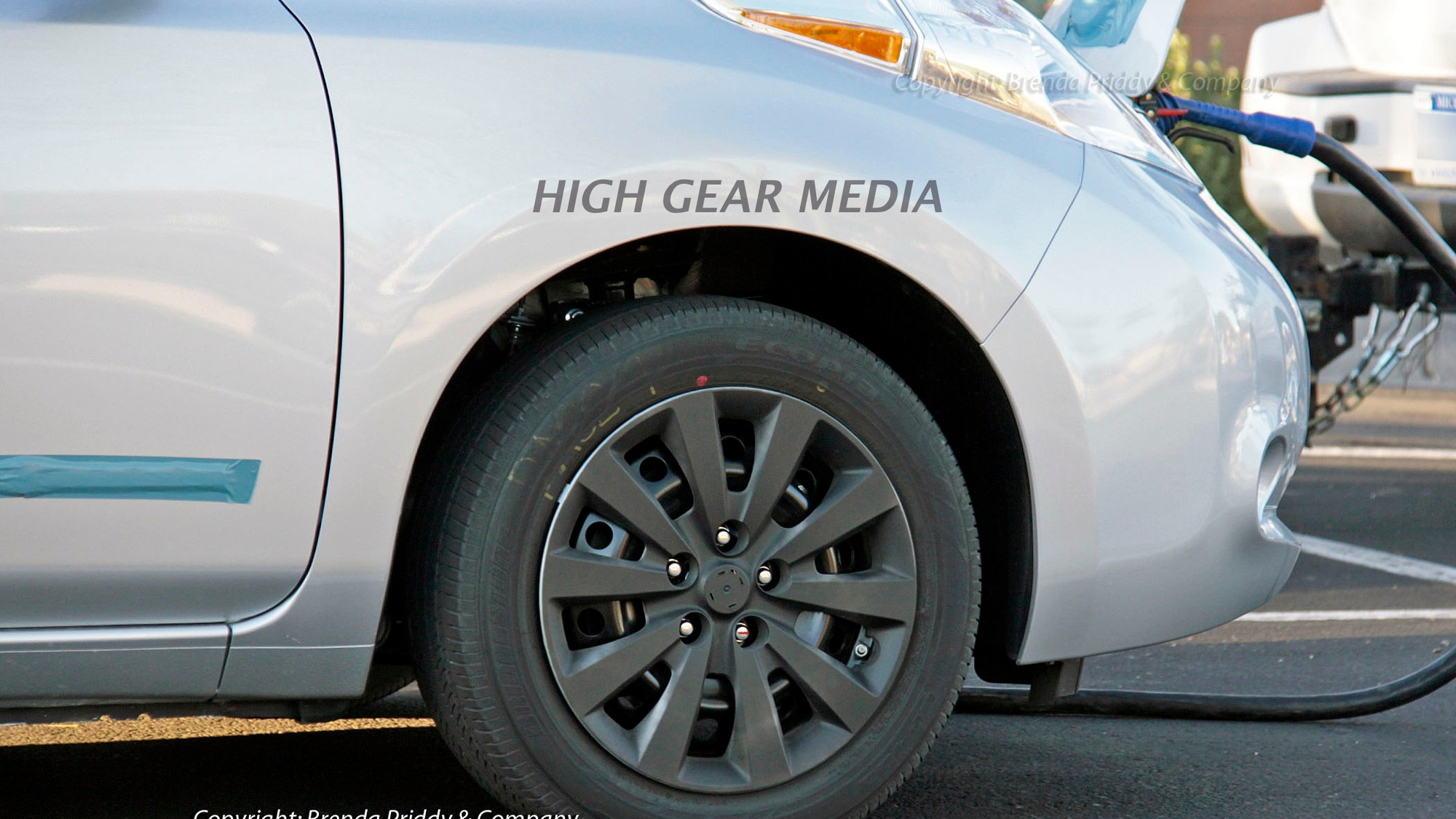 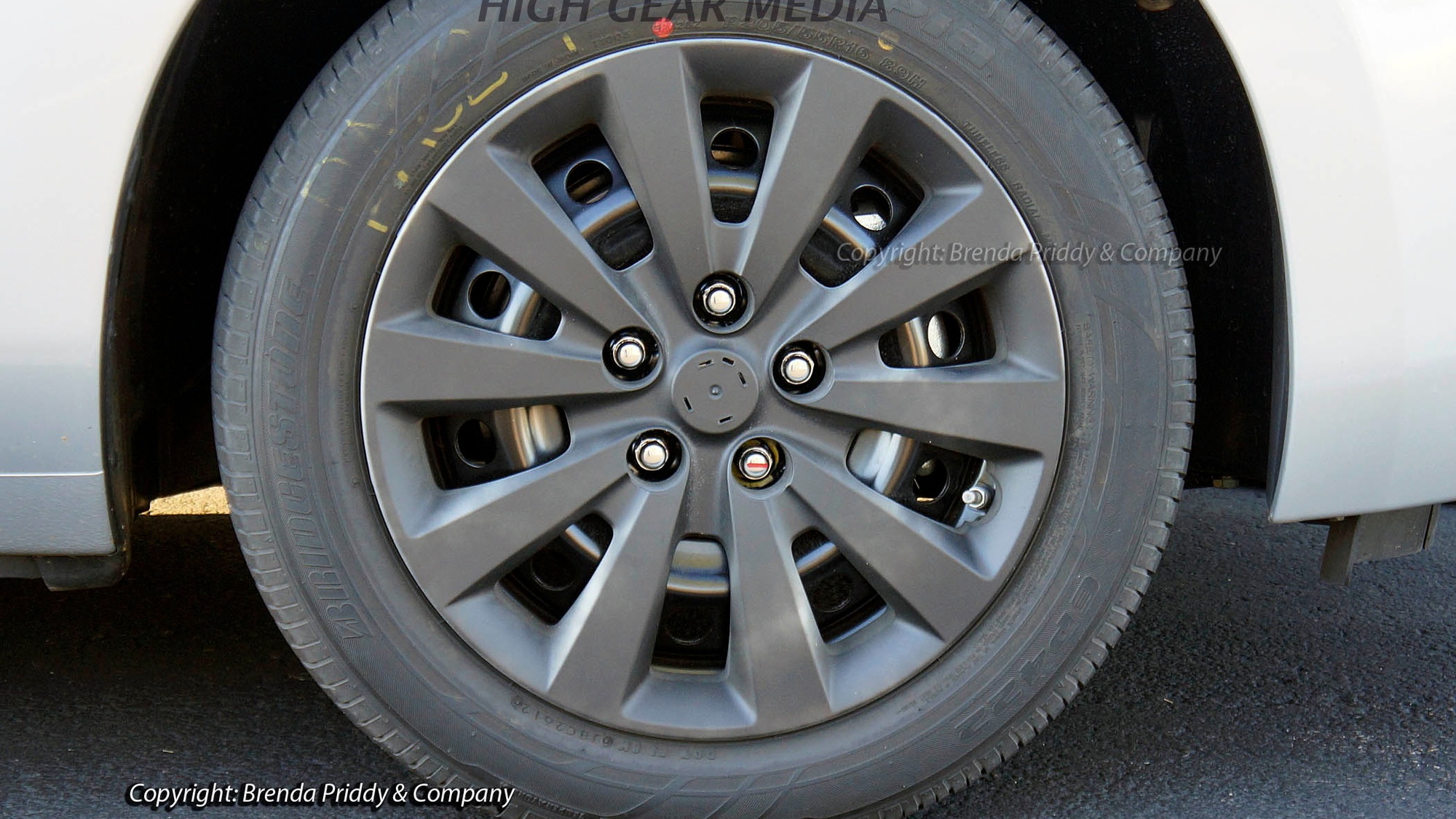 With the first 2013 Nissan Leaf electric car expected to roll out of the Smyrna, Tennessee, plant in mid-December, many rumors have been flying about what changes the updated Leaf will have.

Now we have the first spy shots showing some of the modifications Nissan has made to create a new, less expensive Leaf model.

Taken just this morning by notorious spy photographer Brenda Priddy, the prototype 2013 Leaf shows many subtle but unmistakable signs of the changes Nissan has made to cut costs.

Most visible are the revised headlights, which dispense with the current Leaf's light-emitting diodes (LEDs) and use more conventional high-intensity discharge headlamp bulbs.

Also on the outside, Nissan has deleted the current alloy wheels and replaced them with black-painted steel wheels and dark grey plastic wheel covers.

We suspect the black-painted covers shown on the test car may be silver once they reach production, and with luck the black steel wheels underneath will be silver too.

The various interior trim and dashboard moldings are uniformly black plastic as well--probably less expensive, though perhaps more heat-absorbing for those in hot and sunny climates.

It also appears that Nissan has deleted the cruise control from the steering wheel, with a silver blanking plate on its right-hand side where those controls are now sited.

While the place where the center display screen sits is covered over with cloth on the test car, Nissan may be fitting a smaller or less expensive screen, or eliminating some capabilities of the current system.

It's unclear whether the company would go as far as deleting the navigation system, since most observers suggest that at this early stage, electric cars need to offer the ability for drivers to locate the nearest public charging station if range is getting low.

Other modifications, invisible in these photos, are said to integrate some of the power electronics and other elements of the running gear into components with fewer parts.

While a 6.6-kilowatt onboard charger has been confirmed as an option on some 2013 Leafs, this new low-cost model will undoubtedly stick with the slower 3.3-kW charger.

The 2013 Nissan Leaf will hit showrooms early next year, by March at the latest.

Production of lithium-ion cells for its battery starts this month at a brand-new fabrication plant adjacent to the Smyrna vehicle assembly plant.

It's possible the new model might be called the 2013 Nissan Leaf S, following the company's nomenclature for other model lineups, which run from S through SV to SL.

While not all U.S.-built 2013 Nissan Leafs will carry this low trim level, it gives the company a much lower base price for the new model year.

Nissan says that most Leaf buyers today order the higher-spec SL trim, as against the base SV model, and that may continue for the 2013 model.

But if the current year Leaf carries a base price of $35,200 (including delivery), then with the pricey Japanese yen largely removed from the equation--and less standard equipment--how low could the Leaf really go?

Leave us your thoughts--and anything else you notice about the prototype car in the spy shots--in the Comments below.