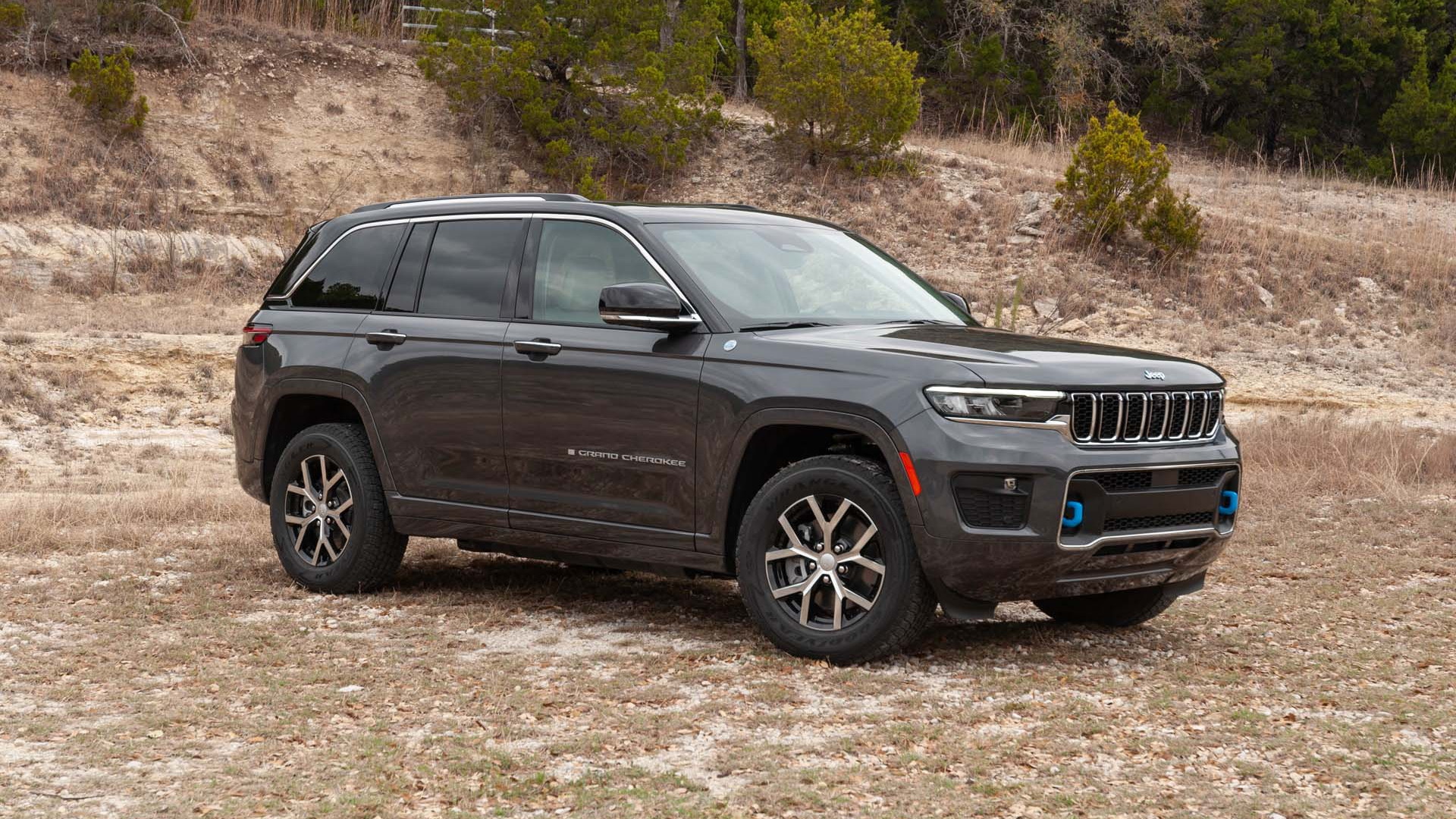 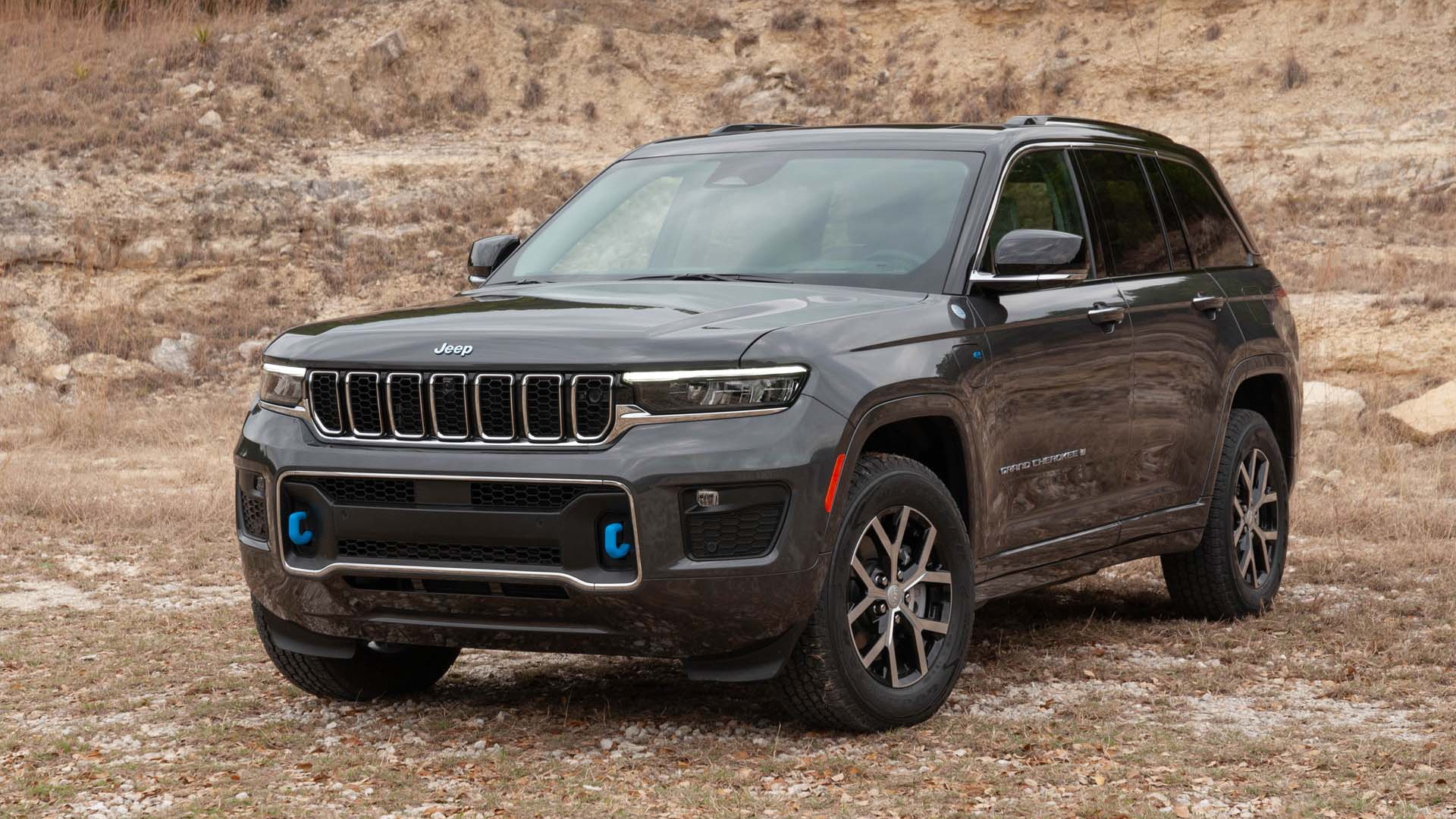 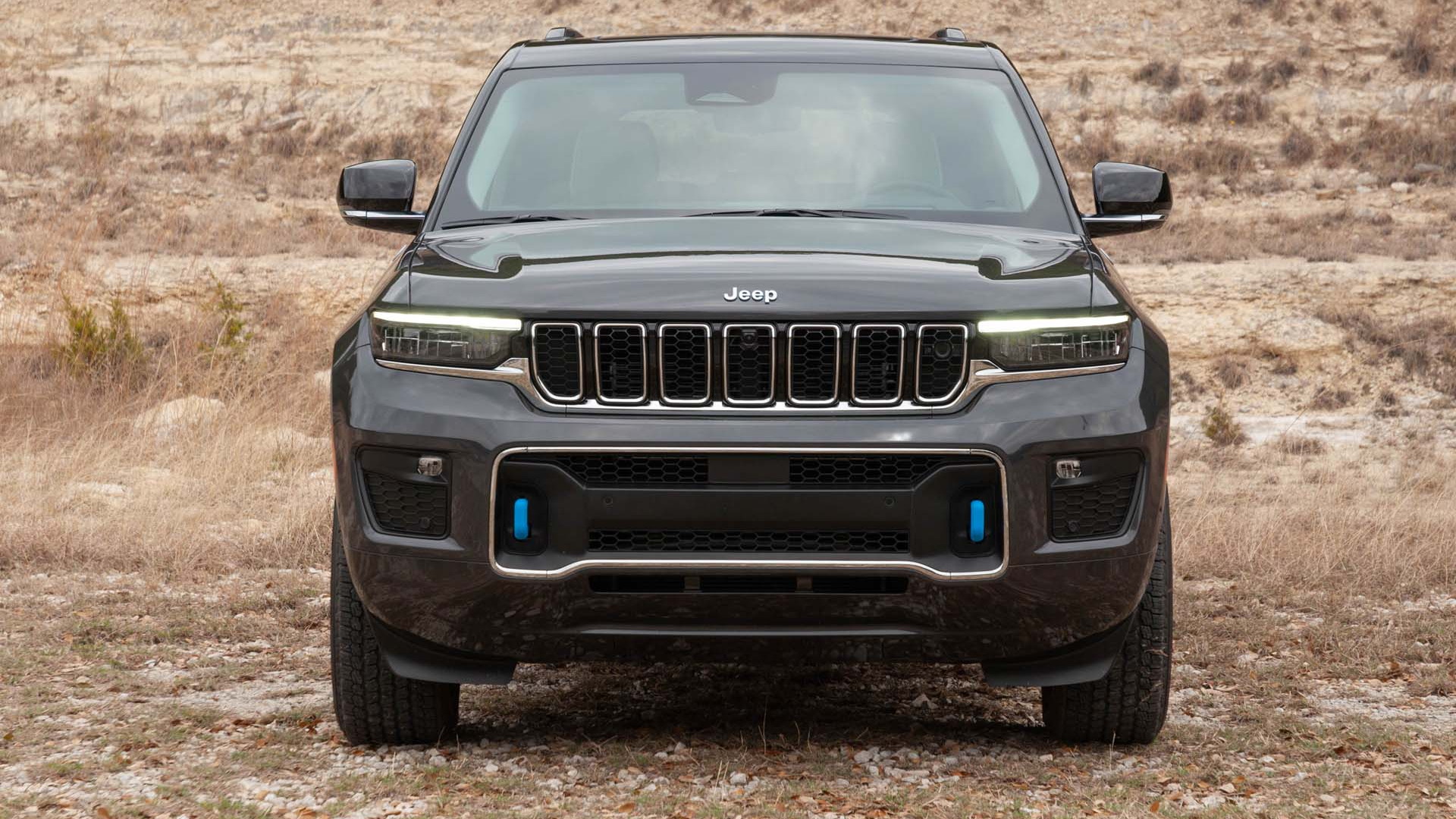 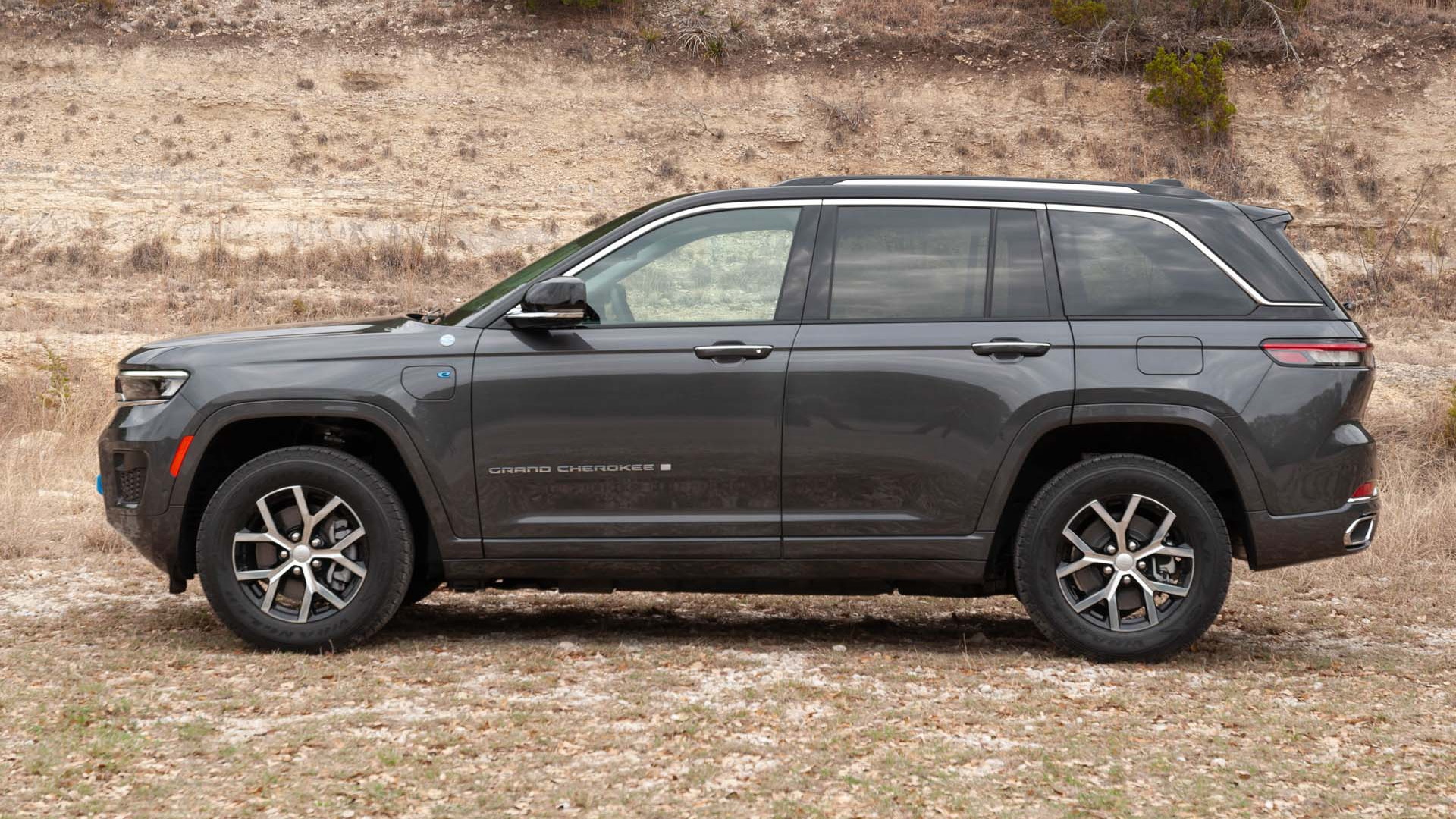 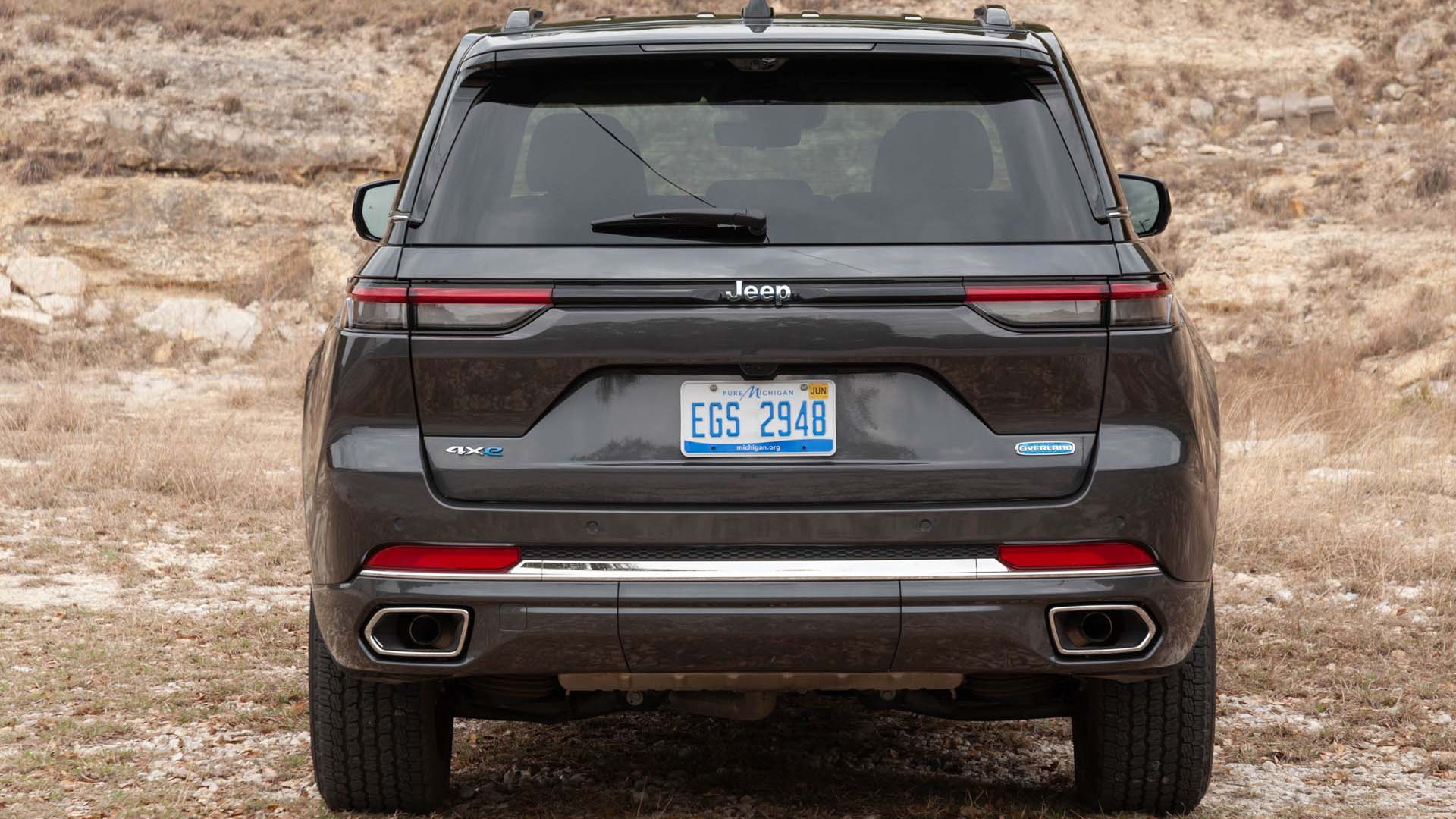 To those wanting a plug-in hybrid Jeep that isn’t a life-size Lego car in which the roof and doors come off and the windshield folds, your time has come.

Jeep shoved the Wrangler 4xe plug-in hybrid’s powertrain into the Grand Cherokee. Like its sibling, the 2022 Grand Cherokee 4xe sacrifices nothing in its transition to become more efficient—except your wallet. Just as with the Wrangler, plugging in comes at a pretty hefty price premium.

The Grand Cherokee 4xe spec sheet reads like a near carbon copy of its windshield-folding sibling. There’s a 2.0-liter turbo-4 with 270 hp and 295 lb-ft of torque paired with a 44-hp motor-generator (which connects directly to the crankshaft via a belt and replaces the starter). A 17.3-kwh battery pack powers a bigger electric motor that puts out 134 hp and 198 lb-ft, sandwiched within the 8-speed automatic transmission. Total system output is 375 hp and 470 lb-ft of torque, making the PHEV model the most powerful one in the Grand Cherokee lineup, at 18 hp and 80 lb-ft of torque over the optional 5.7-liter V-8.

The same three powertrain modes, Hybrid, Electric, and e-Save, have been ported over and operate in the same fashion as the Wrangler. Hybrid is as it sounds, as is electric. Though, the latter will kick in the gas engine if the accelerator is put to the floor as the electric motor simply doesn’t have enough power. Using e-Save mode will tell the system to preserve as much battery power as possible for later use where it’s best—in electric off-roading, or in low-speed urban stop-and-go driving. The system can recharge the battery, using the ICE as a generator, in e-Save mode at a rate of up to 3 kw in some conditions, though it’s not an efficient way to recharge the battery.

Despite hauling a split battery pack in its chassis (and a somewhat smaller gas tank) the PHEV version of the Grand Cherokee gives up no capability in the name of efficiency and has a total driving range of 470 miles.

Over the course of a day and over about 200 miles of driving both on- and off-road, the Jeep delivered on its EPA ratings of 25 miles of electric range, 56 MPGe, and 23 mpg combined—mostly. In mixed driving starting with the battery at 99% state of charge the Grand Cherokee went 24.5 miles before the juice ran out and the powertrain flipped into hybrid mode netting 23.5 mpg average lining up exactly with EPA ratings. But starting off with an empty battery running in pure hybrid mode over the course of about 100 miles of mostly highway into Austin, Texas the 4xe only mustered 18.5 mpg according to the trip computer. The V-8, and V-6, can do that, and better without a full hybrid system.

Under electric power the 8-speed automatic transmission shifts smoothly without issue and the power is linear, but it’s not enough. Put the accelerator to the floor and the gas engine will kick in, but it takes a full second. The point-and-shoot nature of the V-8-powered Grand Cherokee is lost here despite the PHEV’s 0-60 mph sprint of 6.0 seconds vs the V-8’s 6.9 sprint. Finding a hole in traffic and zipping into it from a stop proved difficult, as it’s hard to anticipate the entire powertrain waking up from its slumber.

In hybrid mode, in normal driving around town, the powertrain was smooth, with active noise cancellation blotting out the turbo-4’s spooling and coarse sound when revved. But with nearly 6,000 lb of trailer and classic Jeep mail truck hooked to the back of the 4xe (which maxes out the 4xe’s tow rating, which we don’t recommend doing), the revs climbed and stayed above 3,000 rpm to maintain near 40-plus mph. Pulling away from a stop was easy thanks to the electric motor’s instant torque fill, but quickly the turbo became audible while maintaining speed. On the gravel test loop for towing we weren’t able to top 40 mph safely, which means highway speeds and passing will be left for another day of testing. It’s clear from our very brief initial test the 4xe can tow the rated 6,000 lb and there’s no lack of power. But if towing is the main prerogative the V-8 might be the better option. Towing isn’t an efficient activity.

Off-roading in the 4xe is a mixed bag. The instant torque from the electric motor is nice in theory, but in practice it made climbing rock faces or over boulders slightly more difficult as the power is either on or off like a light switch in electric-only mode with the 4xe’s throttle tuning. This made for some situations where the Grand Cherokee would rock back and forth as it was not easy to creep up a steep incline smoothly.

Jeep said Max Regeneration mode mimics one-pedal driving in an EV, but that’s a stretch. Engaged easily via a button on the dashboard (and it stays on even when key cycling the 4xe), the system bakes in more regenerative braking, but it’s strongest below 40 mph. The system will not enable the Grand Cherokee to come to a complete stop without using the brake pedal, and it does creep forward when you lift off the brake. Max Regeneration mode seemingly responded differently while off-roading in all-electric mode, as it held the Jeep in place and helped modulate the power a bit to have it come online slower in tricky situations.

Efficient, but is it a value?

The 2022 Grand Cherokee 4xe pricing is a bit of a puzzle. Base models cost $59,495 including the $1,795 destination fee. It’s based on the Limited model in the gas-powered Grand Cherokee lineup, but comes better equipped with a 9-speaker Alpine audio system, 10.1-inch touchscreen infotainment system, 10.0-inch touchscreen front seat passenger infotainment screen, and panoramic sunroof, which similarly equipped means a $6,655 price premium. Bake in the federal tax credit, should you be fully eligible, and the base 4xe might cost less than a comparably equipped Limited in the end. A fully loaded Summit Reserve 4xe with night vision along with quilted leather and massaging front seats pushes up against $80,000 before tax credits.

This puts the 4xe into near luxury territory, where the Volvo XC90 T8 Recharge and BMW X5 PHEVs live. Both cost only a few thousand dollars more in base form, are quicker, just as powerful, and more importantly, have more electric range. In top Summit and Summit reserve trim the Grand Cherokee 4xe holds its own, but in lower trims it feels expensive and pushes the limits of value before the tax credits take hold.

Considering that, if towing isn’t the main objective the 4xe makes sense—especially if you’d be looking at a Limited or higher trim with some options. It’s more efficient, as pleasant if not more to drive, and no Volvo or BMW has this level of off-road capability.

–
Jeep flew me to Austin, had me sleep in a hotel, provided some food, and had me drive to a ranch in the middle of nowhere Texas to bring you this first-hand report.