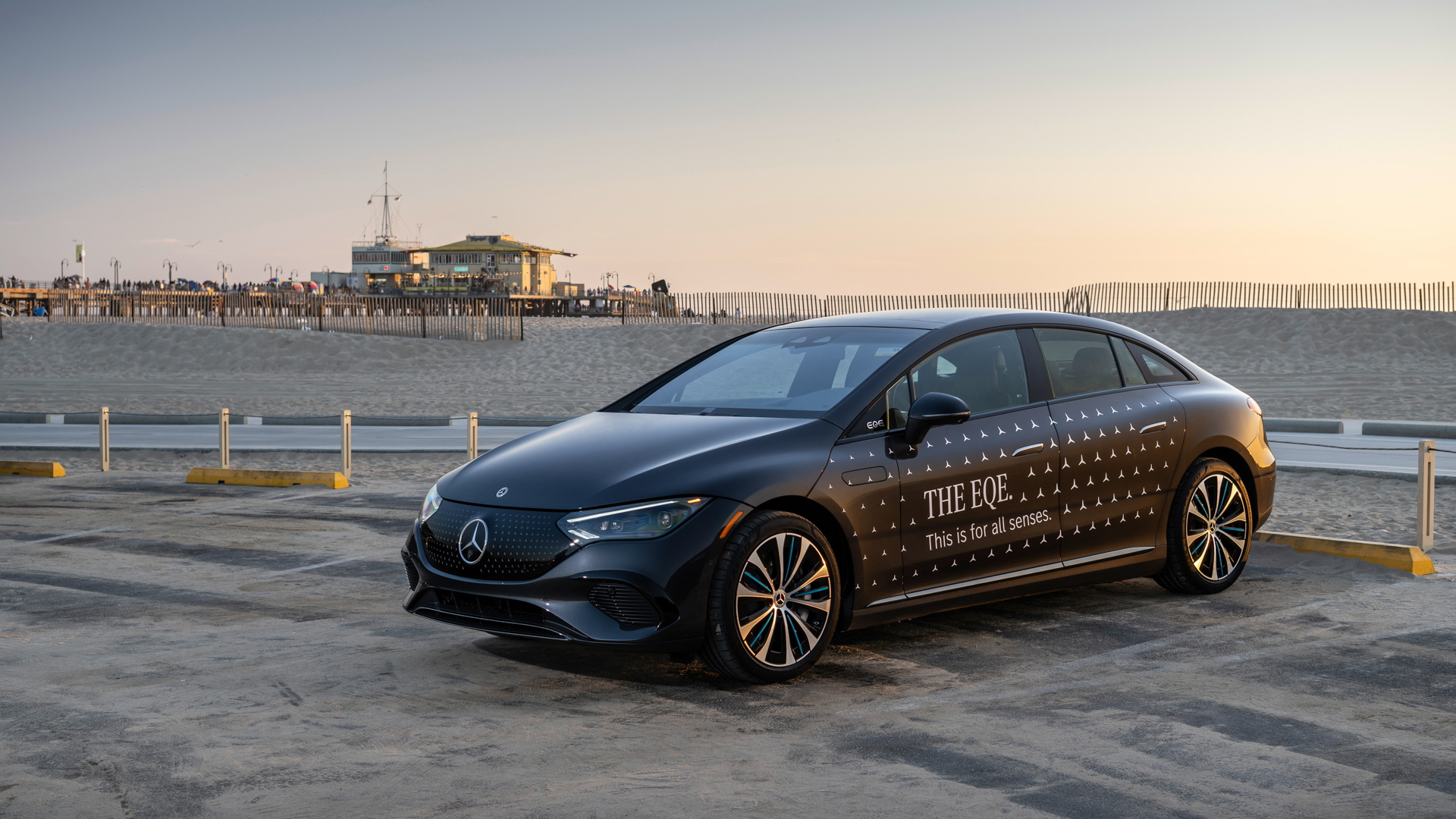 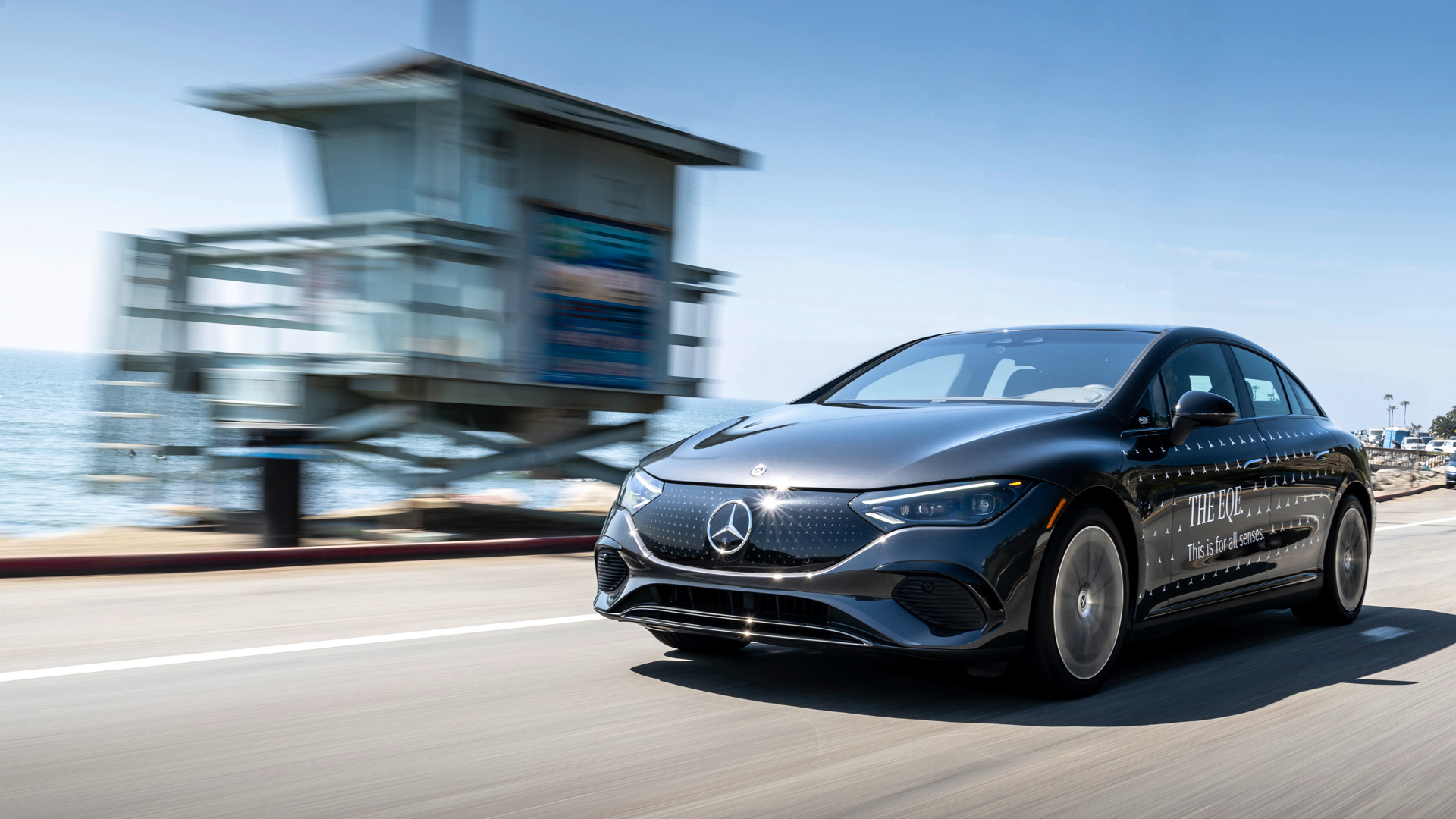 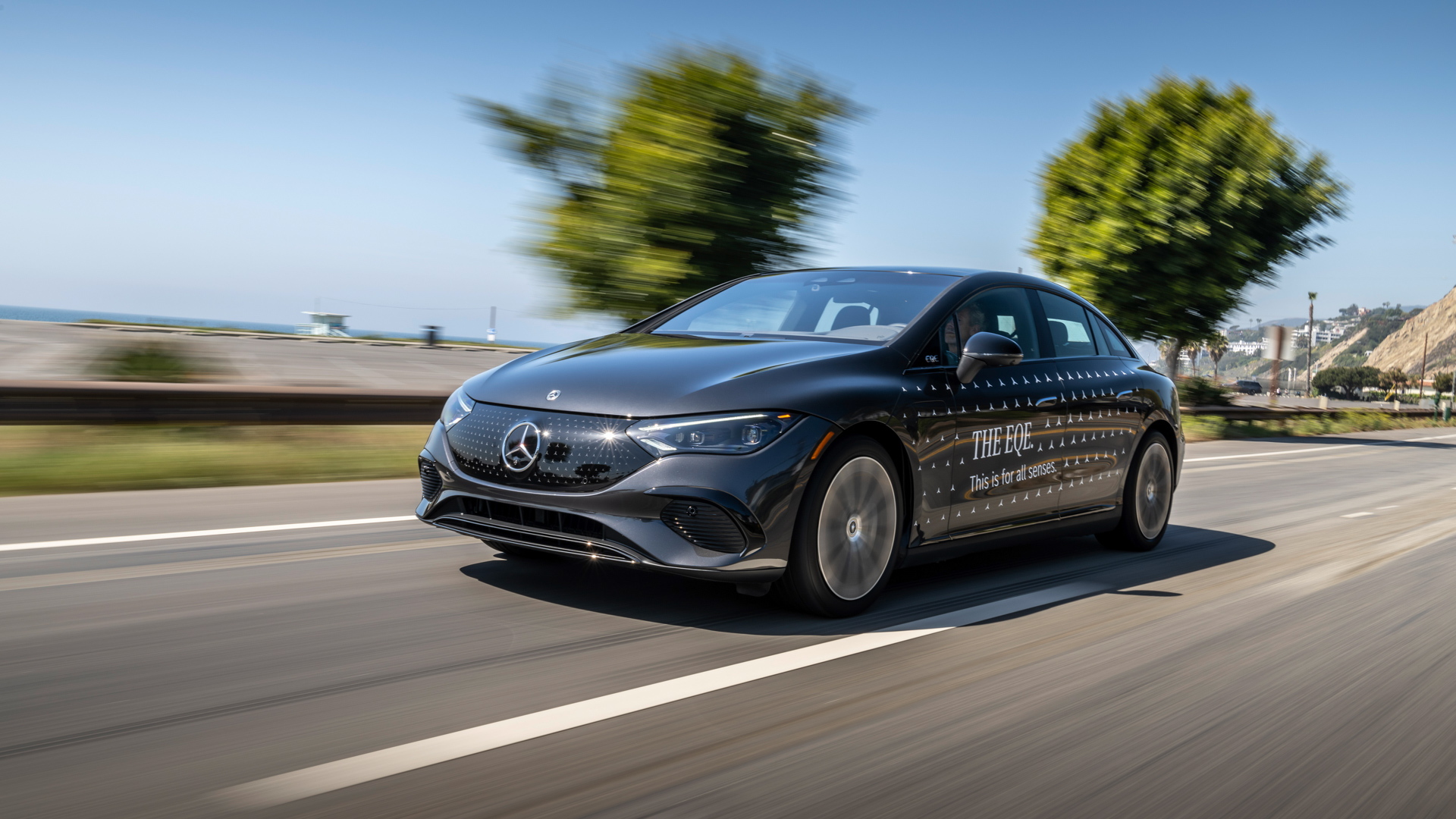 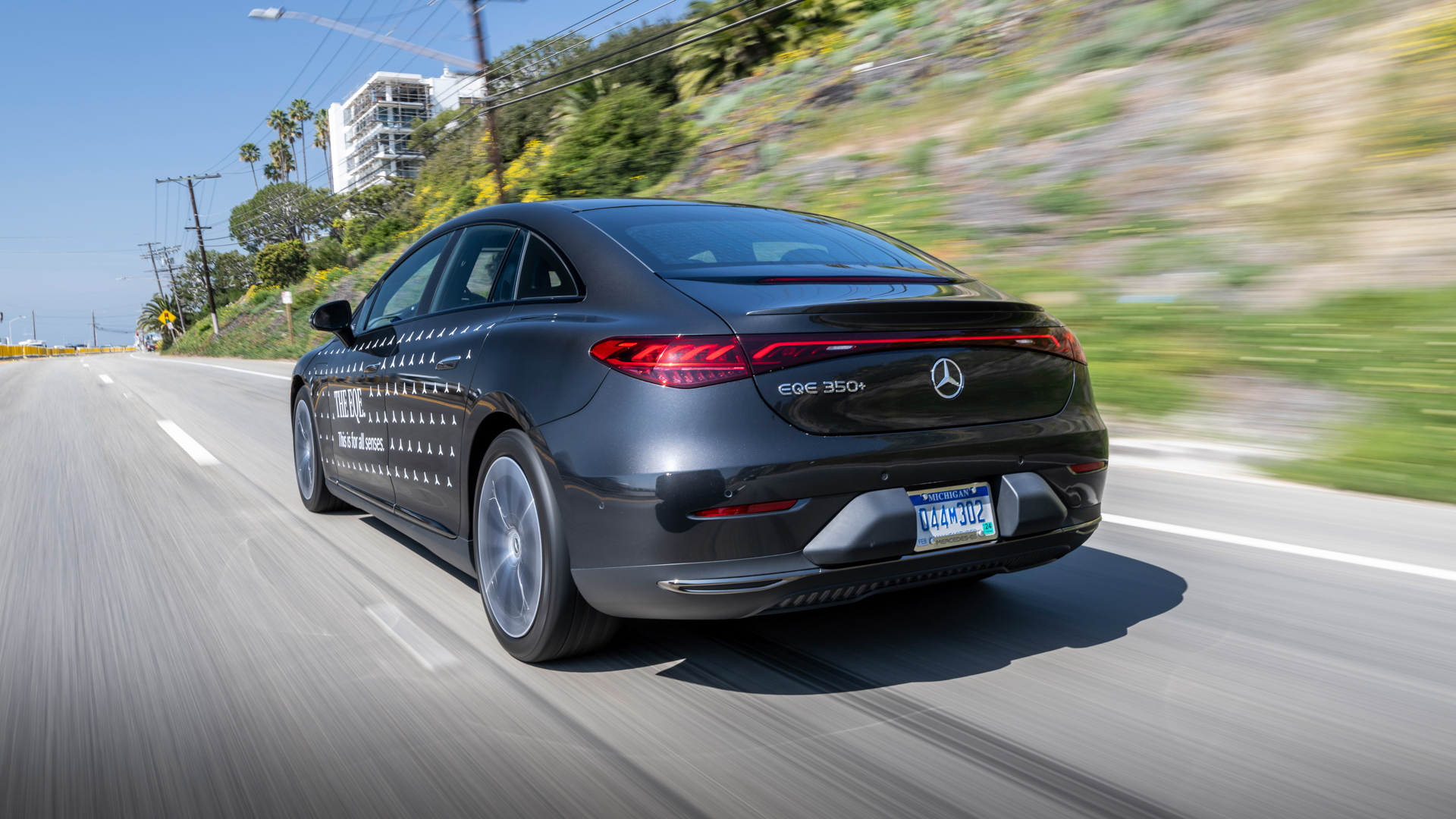 The next fully electric luxury car from Mercedes-Benz, the 2023 EQE sedan, will closely follow the introduction of the 2022 Mercedes EQS flagship and arrive in the U.S. late in 2022. We've already had some preliminary time in the passenger seat, so keep reading not just for the basics but for a few first impressions.

The EQE is also close enough in size and positioning to call the Porsche Taycan and Audi E-Tron GT rivals, as well as the upcoming Lucid Air and somewhat smaller BMW i4.

The sedan was first introduced late in 2021, but we recently had a chance to take a ride around Los Angeles in the new car for a preview of what the electric E-Class has to offer.

The EQE rides on the same dedicated EV platform as the EQS and has a remarkably long wheelbase of 122.9 inches, over seven inches longer than that of the gas-powered E-Class sedan. That permits a lot more cabin and occupant space, Mercedes didn’t provide an exact figure but said that there’s roughly four inches of added rear legroom. Though the EQE won’t get the same executive class rear seat features the EQS enjoys like heated/ventilated rear seats and power recline functions, it’s still a very comfortable area that is plenty large for long trips.

Like the larger EQS, the EQE follows a futuristic “one-bow” profile that goes radically aerodynamic in some of the details. A clamshell hood helps provide a clean look for the front, and with the wheels pushed out toward the corners thanks to the wheelbase, the visual stretch of the space from the front wheels to the front doors makes the EQE look especially long without another car next to it for context. In fact, without one nearby the EQE will get mistaken for the EQS quite often.

Unlike both the Model S and the EQS, which are hatchbacks, the EQE is a traditional sedan, with a fixed rear window and separate trunk lid. Mercedes indicated that they explored putting a hatch on the EQE, but the hinges would impede too much on rear seat headroom so it went with a more traditional sedan solution.

We rode in an EQE 350+, the rear-wheel-drive version with a single permanent-magnet motor at the rear wheels producing 288 horsepower and 391 lb-ft of torque. Mercedes says that it will accelerate from 0-60 mph in 5.6 seconds and reach a top speed of 130 mph. This is the version of the sedan that will arrive first, followed by an all-wheel drive version at a to be determined date.

The AMG EQE performance model will arrive in early 2023, offering a dual-motor AWD setup that 617 hp and 701 lb-ft, or up to 677 hp and 738 lb-ft with the boost mode that’s a part of the Dynamic Plus package. Mercedes has quoted a 0-60 mph time of 3.2 seconds with that package equipped. That aligns with the more powerful AMG EQE 53 model that Europe will get, the less powerful model with a 43 designation won’t be coming to U.S. shores.

From a standstill, the EQE 350+ launches quickly and smoothly. There isn’t the same off-the-line jerk you get from other performance EVs, but it gets up to speed with ease. The quietness of the interior is EQS-like, the only thing I could hear was the hum of an “energizing” audio soundscape that Mercedes offers (which can be turned off by the driver). But the EQE is definitely sprung more stiffly and you can feel more road undulations and imperfections. This is intentional, as the EQE is designed to feel more performance oriented and athletic, but we’ll have to wait to get behind the wheel to see how these changes work out more thoroughly.

Likely to beat Taycan and E-Tron GT in range

A flat 90.6-kwh lithium-ion battery pack resides flat under the floor and, apparently, uses a very high level of its energy as usable capacity. Mercedes-Benz claims a 410-mile range based on the European WLTP cycle—so expect some amount less than 400 miles in U.S. form. I snapped a quick photo of the trip computer and it showed 194 miles of range remaining at 64% battery, which would translate to about 303 miles of range. The pack will charge up in 9.5 hour with a 32-amp Level 2 (240-volt) connector, and DC fast-charging at 110 kw will allow a boost from 10 to 80 percent in 31 minutes.

The EQE, like the EQS, offers the Hyperscreen layout, consisting of a 17.7-inch central OLED display and two 12.3-inch displays, one for the instrument panel and one for the passenger, all framed within glass that makes it look all of a singular interface. From the front seat, the only thing that’s missing to make it a nearly identical experience to the EQS are those wonderfully comfortable sueded pillows the flagship attaches to its seats. The base layout includes a 12.8-inch central portrait OLED touchscreen plus the 12.3-inch instrument cluster. The interface includes a “zero layer” approach to the interface that reduces navigation through menus, and available augmented video can help with navigation by superimposing an image of the location. And 64-color LED interior lighting will help set the desired cabin ambience.

In addition to the full suite of active-safety items you’d expect in a new Mercedes-Benz product, the German automaker brings some noteworthy technology to the features list. The roster includes an active fragrance system and four-zone climate control, an air suspension, and rear axle steering. This system allows the rear wheels to “steer” up to 10 degrees to aid maneuverability or agility while adding stability on the highway, and lowers the car’s turning radius from 41 to 35 feet. Available comfort front doors automatically extend handles as the driver approaches, and the driver’s door opens automatically, closing automatically with a press of the brake pedal.

Mercedes says that pricing details for each vehicle will be available closer to launch, as well as the timing of the AWD version of the EQE.