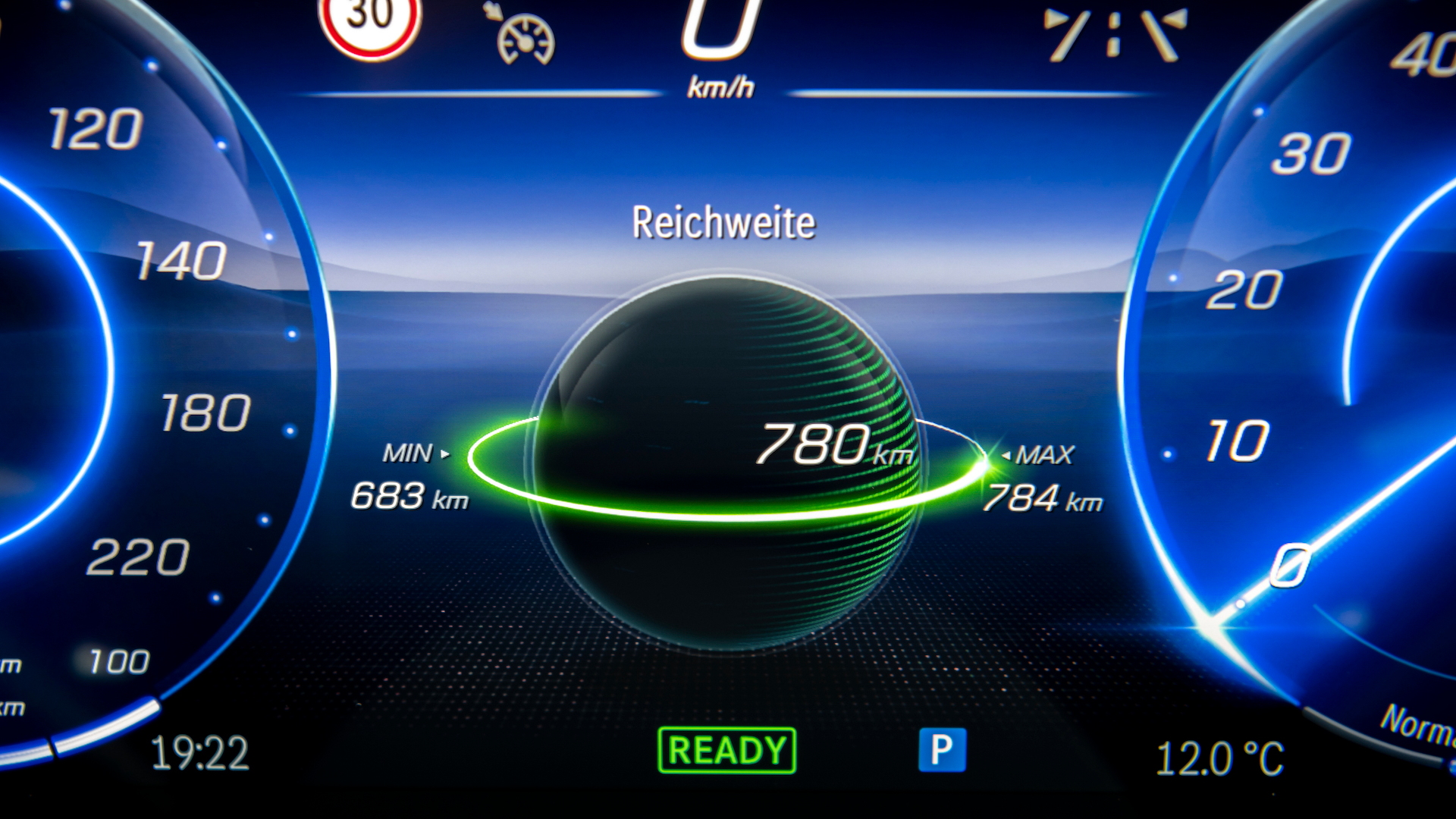 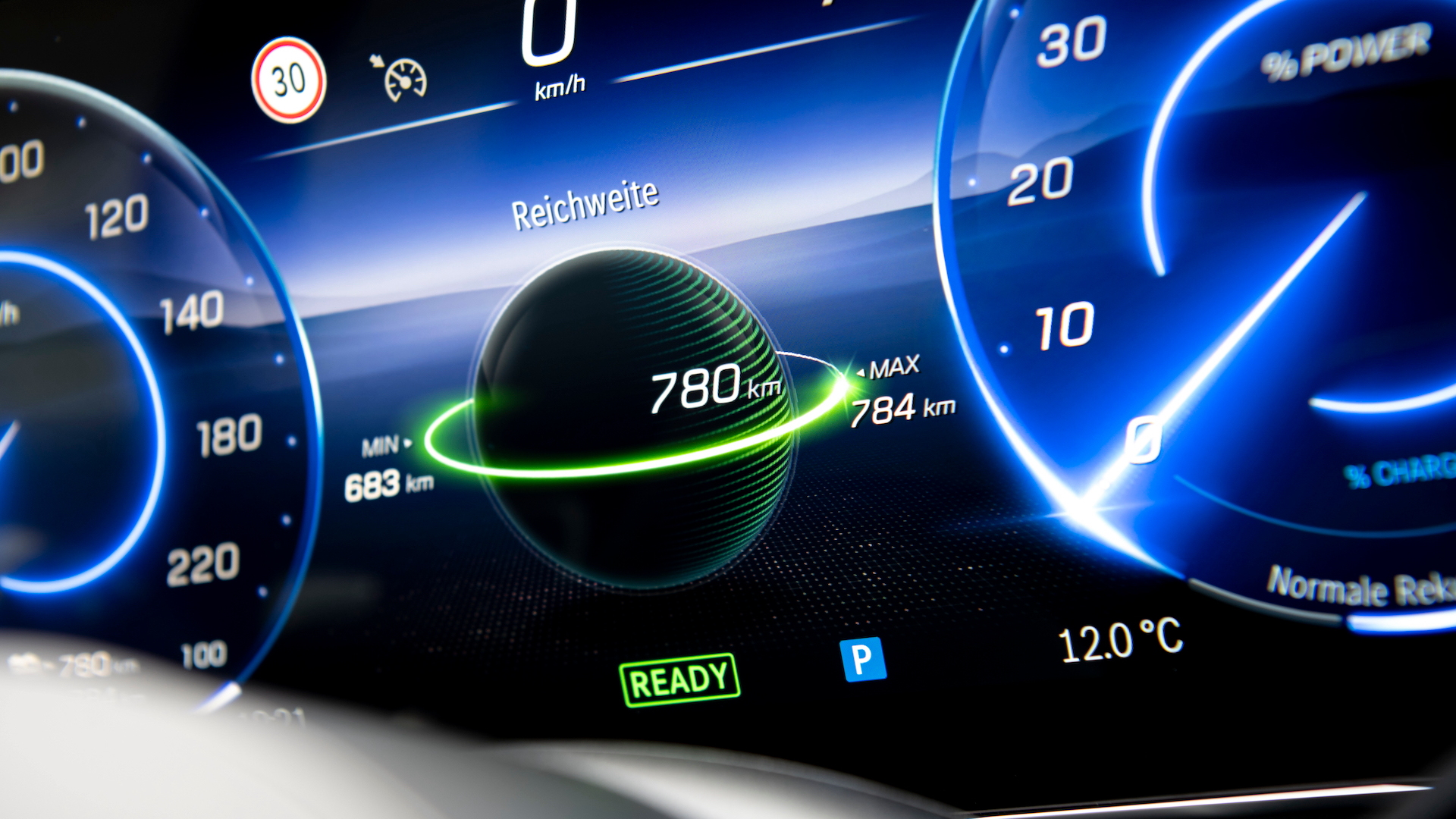 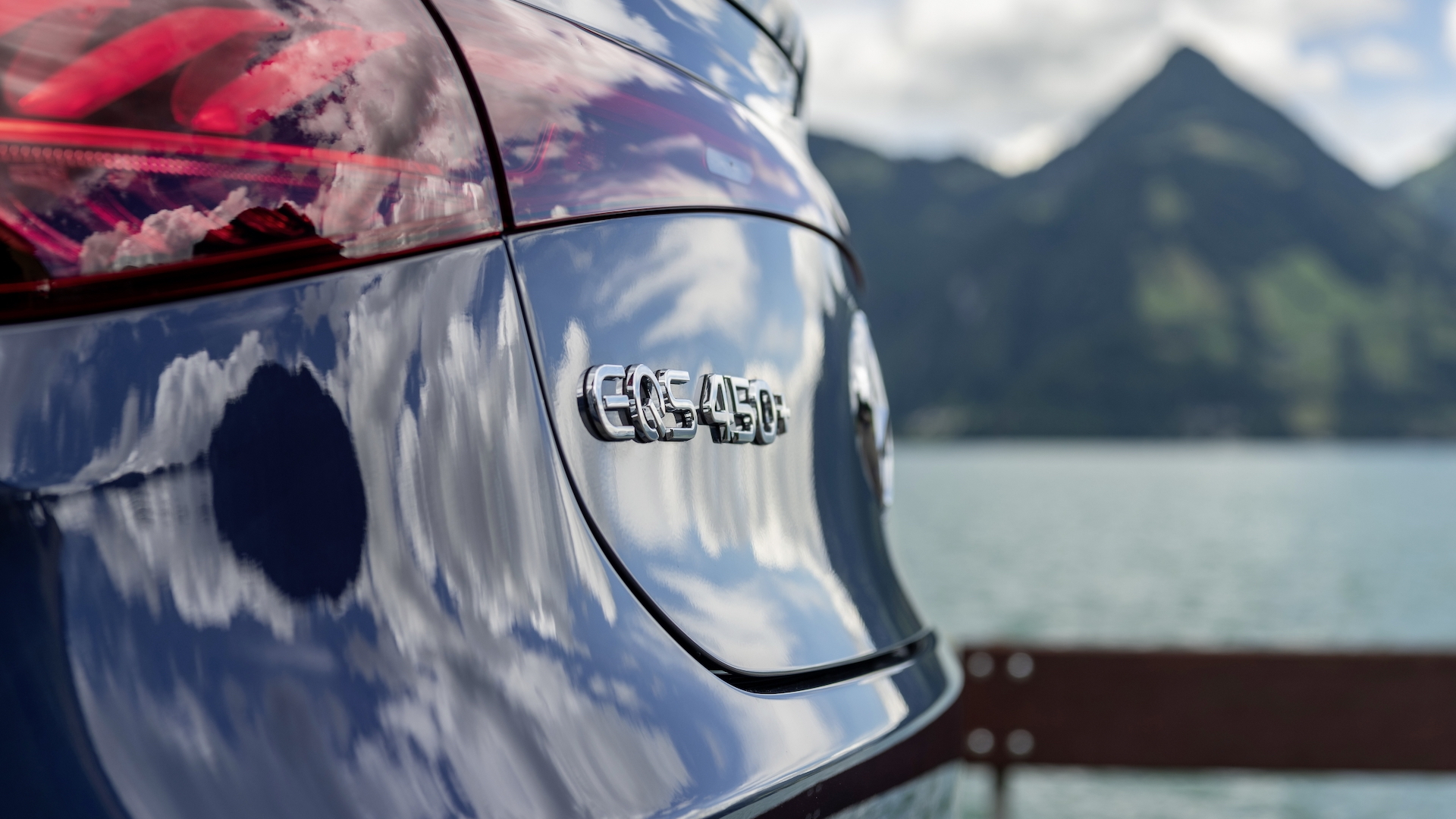 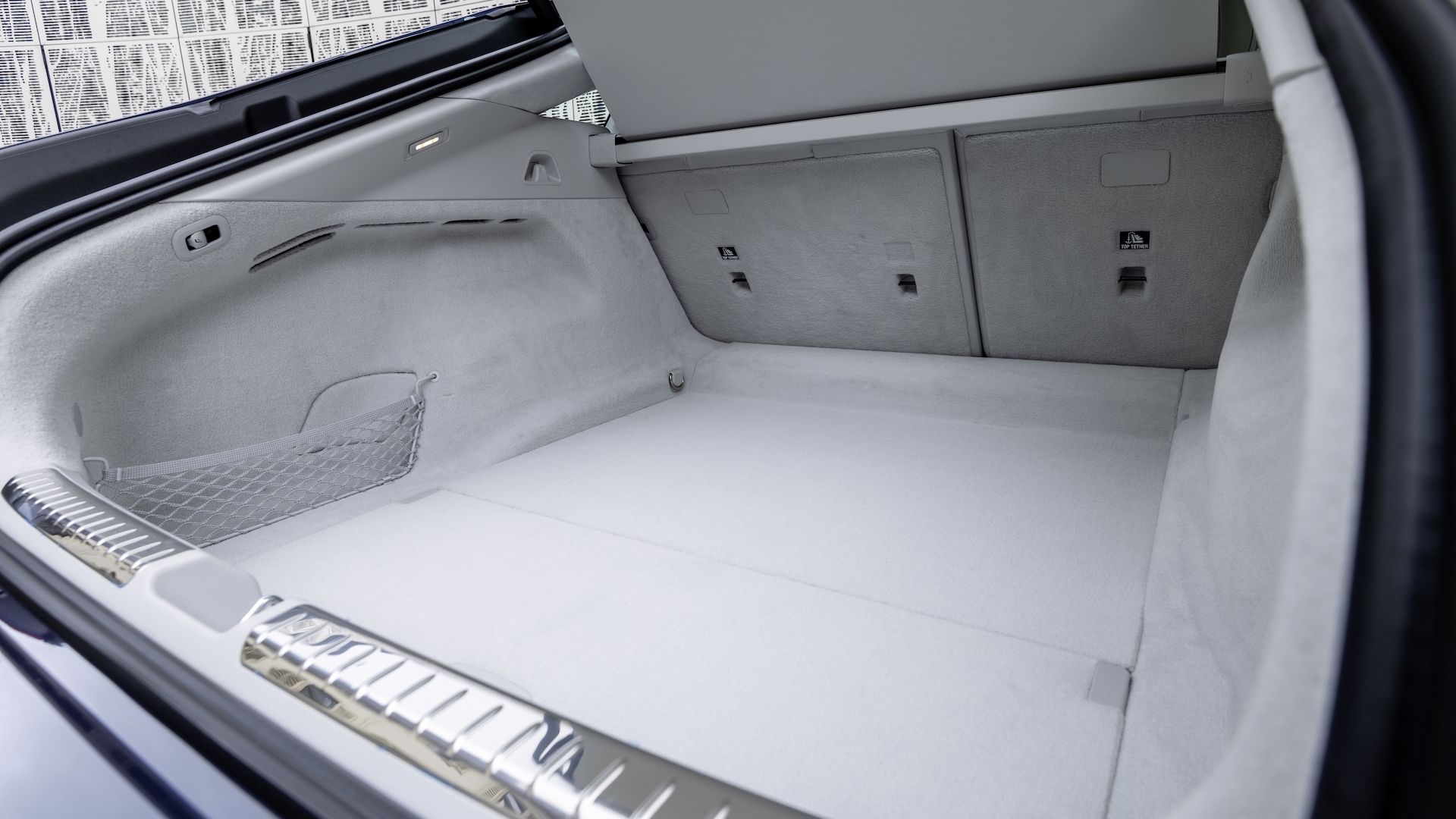 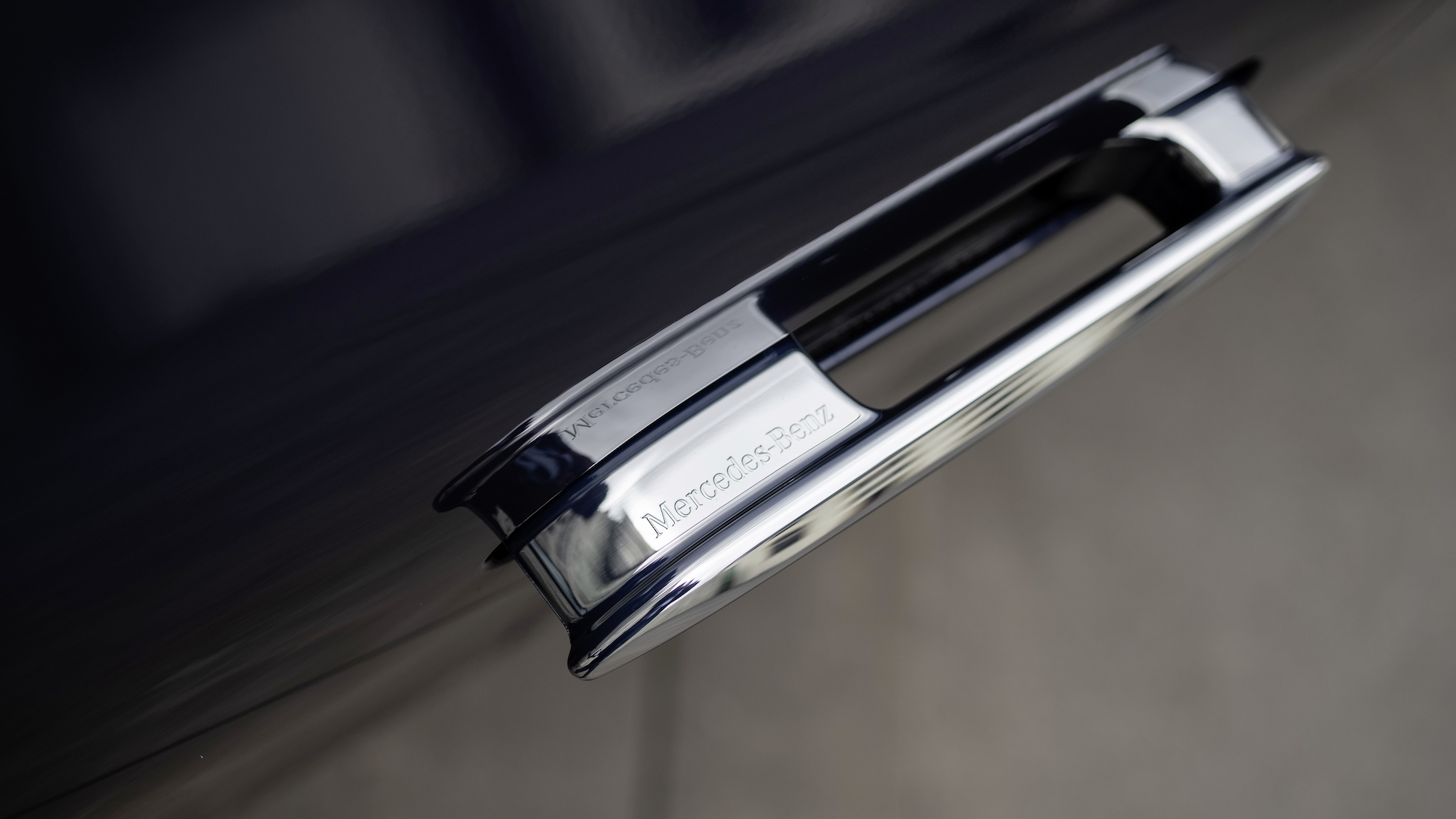 The 2022 Mercedes-Benz EQS pitches the luxury nameplate out of its comfort zone and into an all-electric future it had slow-tracked over the past decade.

Even with its remarkably rapid development, Mercedes is in the unenviable position of playing catch-up with the 2022 EQS. The Tesla Model S emerged nine years ago and has locked up its loyalists with Supercharging and extraordinary range and acceleration. Along with the Model S, the growing executive-class niche also gathers up the Porsche Taycan, and will soon include the Lucid Air.

I trekked to ancestral Swiss villages to drive the EQS, with dozens of questions—some left unanswered. The big ones have solid green check marks: With the EQS, Benz has more than caught up to Tesla in some ways, but defers to it in others. Mercedes pitches it as the serene option, and on that grace note it succeeds.

With the EQS, Mercedes grappled with the balance between heritage and range. All but an S-Class replacement for electric-only purists, the EQS melds extreme aerodynamic surfaces with some recognizable brand bits, all in the name of extending its battery life.

The proportions don’t read S-Class. The EQS has a shorter front end and a longer greenhouse, with cutlines that denote a clamshell hood without any payoff: It can’t be opened by drivers and there’s no front trunk beneath it. The face wears a pattern of three-pointed stars and a large emblem, all pressed into a plastic trim panel that hides the car’s lidar sensor. The shape grows more bulbous toward the rear, where slim LED taillights encircle the liftback in the smoothest way possible. It accumulates to a shape with a 0.20 coefficient of drag. In black and oddly, in two-tone, it’s both stately and forward-looking, but lacks the subtle curves that have graced some recent S-Class models.

The EQS interior recaptures all the regenerative drama omitted from the exterior, so long as the Hyperscreen system of panels and controls is in place. Base EQS 450+ cars install a portrait-style 12.8-inch touchscreen that’s very similar to the current S-Class; all others knit a trio of displays into a singular expansive pane that jams its pixels with warnings, notifications, instructions, and other retina-tickling information. Framed by turbine-style vents and rimmed by a thin pulse of LED lights, it’s a techno tour de force that engages a new front in the infotainment wars.

To compete with the onslaught of high-range electric rivals like the Model S Plaid and Lucid Air, Mercedes stacks the EQS body on a new skateboard stuffed with enough CATL battery cells to add up to 107.8 kwh of energy.

In the EQS 450+ that power erupts from a single 245-kw rear motor, which nets out to 329 hp and 419 lb-ft of torque. With 5,597 lb on deck before passengers take a seat, the EQS 450+ zips to 60 mph in 5.9 seconds, up to a 130-mph top speed. Those figures line up with nothing in the Model S lineup; they’re more base S-Class. It’s a far cry from the three-second numbers posted by a long-range Model S—and that’s to ensure repeatable performance, not to reinforce silly carbon-era tropes.

Drivers can alter the EQS’ power delivery in a few ways. Classic drive modes spin the EQS from Comfort, to Eco, to Sport, and to Individual setups with distinct steering and suspension feel. Four regen modes allow control over the recuperation of power, from an Auto mode that works in concert with navigation and driver assists, to a sail mode, to a light regen mode, to the ideal setup with maximum recuperation for one-pedal driving. On day two of the slog through soppy Swiss Alps, I left it entirely in this latter mode and in Sport to get better body control from the suspension. That rendered the friction brake pedal travel down to near zero, and very hard; in the EQS 450+ on the day prior, it took time to adapt to a very long pedal stroke. Setting the regen high is a workaround, but gently tugs the EQS further away from the S-Class in demeanor.

Those friction brakes, by the way, comprise massive 15.4-inch front and 14.9-inch rear rotors, with painted calipers obscured by wheels with small vanes which restrict turbulence.

The quietness of the cockpit is remarkable, even under full hammer, which in Switzerland is roughly 72 mph. At that highway speed, the EQS emits just the noise of tires slewing softly over wet pavement and some light motor noise. Mercedes programs  supplemental noises into the car with anime-style names such as Silver Waves, Vivid Flux, and Roaring Pulse. I chose the sounds of the sea to accompany the light whir of the EQS’s permanently excited motors, to live in my own Yacht Rock simulacrum.

Over a couple hundred kilometers of Swiss mountain runs, the remarkable aspect of the EQS 450+ and 580 was the S-Class body control. The three-chamber air suspension and adaptive dampers carried over from the gas-powered S-Class give the EQS a resolutely cushy ride that clabbers the road softly. With base cars on 255/45R20 wheels and uplevel 580 cars on 265/40R21s front and rear, the EQS copes easily and delivers tenacious grip. Still, even with all-wheel drive in the EQS 580, I don’t dare go as fast as its twin motors will allow. At nearly three tons, understeer remains a constant companion through countless hairpins.

The EQS snugs through corners with adept footwork thanks to 10 degrees’ worth of rear-axle steering, which permits a 35.8-foot turning circle—about the same as a compact car.

Driving feel may differ far less from other electric cars, but the EQS lavishes attention on drivers in another way—with square feet of digital displays. Hyperscreen presents an immersive and sometimes hyperactive interface for drivers. Knitted together from twin 12.3-inch displays, one for the instrument cluster and one for the front passenger (for independent use of audio, climate, and navigation), and a central 17.7-inch display, Hyperscreen spans more than 56 inches and leans on AI to anticipate and aid drivers as they wade through complex, highly customizable interfaces.

It sets in from the moment the driver approaches the car. Configured properly, the front doors reveal their flush-mounted handles and can close at the tap of the brake. A press of the start button activates a band of LED lighting that encircles the cabin and pulses with forward motion like a Tron light cycle.

Hyperscreen itself colors and inflects on the whole driving experience, with myriad settings and notifications that require careful attention and selection. Touch the home button to delve into functions more deeply—or to back out of transient functions. Whatever you do, bring patience to the table or you might get frustrated and shout “REPRESENTATIVE!” at the car as if you’re on hold with some imaginary customer support line, as I did once.

Once the layers are sorted to your liking, you can decide which have limited value, like the low-contrast augmented reality maps that overlay the EQS’ navigation and demand you look at the screen and not the road. The head-up display, by contrast, is a wealth of clearly legible information, from range to directional arrows to current state of bliss. Choose as you wish—just know that you’re now a part of the algorithm and the processing capacity.

Hyperscreen isn’t standard on the EQS 450+, but Mercedes engineers say it’s the critical signature piece that connects with drivers before they buy an EQS, and lives with them in a truly connected fashion. They’re on point: I drove the non-Hyperscreen EQS 450+ and, though I appreciated its simpler S-Class-like experience, it didn’t feel or read like a transformative moment.

Neither will the charging available to EQS drivers. Mercedes promises near-universal access to quick and high-speed charging across the U.S. via ChargePoint and Electrify America. Considering our experience with these outlets—suboptimal upkeep, sub-S-Class locations—it’s likely to be the weakest link in the EQS pitch, by far.

Mercedes boasts of over-the-air updates that likely will boost range over the life of the EQS, but no EPA figures have been published.

The most efficient versions now are rated at 780 km on the WLTP cycle, or 485 miles. On the more conservative EPA cycle we expect something more than 400 miles for the more efficient EQS 450+, but don’t expect that figure to be released until the fall on-sale date. That compares to the 412 miles reached by the Tesla Model S and the 500-plus miles promised by the Lucid Air launch edition.

The EQS and its 9.6-kw charger will likely take more than 11 hours to top off on a Level 2 connector, or as little as 31 minutes to reach 80-percent charge state on 110-kw fast-charging. It can be charged at 200 kw where available.

Hyperscreen is real, but the upcoming EQS Level 3 driver-assistance system is both promising and a tease, at least for U.S. drivers. We were escorted in a car equipped with the system, which operates in hands-free mode at speeds below 37 mph—but it’s impossible to gauge if it will ever be made available here. Audi tried and confronted a morass of liability law and regulation when it feinted at a Level 3 A8 in recent years. Some engineers at our drive promised late next year for Drive Pilot Level 3 in the U.S.; other reps dismissed the idea. It’s a tantalizing prospect, as the Drive Pilot Level 3 EQS picked its way around disabled vehicles, reacted to emergency vehicle horns, and allowed driver interaction with the Hyperscreen all without hands on the wheel—but for now its future is unclear.

What’s also unclear is price. Nothing’s been announced though we suspect an initial five-digit sticker for the 2022 EQS 450+, which comes with rear-wheel drive and the 12.8-inch portrait-style display, as well as heated leather seats, Burmester sound, active park assist, a surround-view camera system, automatic high beams, blind-spot assist, wireless smartphone charging, and a panoramic sunroof—as well as a sort of digital butler that tunes lighting and climate control and car sounds through calming or energizing modes.

The EQS is the first of four electric vehicles to come from its new architecture. The next, the EQE, will debut this fall; two SUVs to be built in the U.S. are in the offing next year. It’s an epochal shift for Mercedes-Benz, which depends on the gas-powered S-Class to pour in the profits.

It won’t be a swift or simple changeover to electric driving, but the EQS positions itself as the serene and storied option. It’s both quieter and softer than the carbon-negative S-Class; it’s also more urgent, in more ways than its pure electric power suggests.

Green Car Reports accepted travel and lodging from Mercedes-Benz to bring you this first drive review.