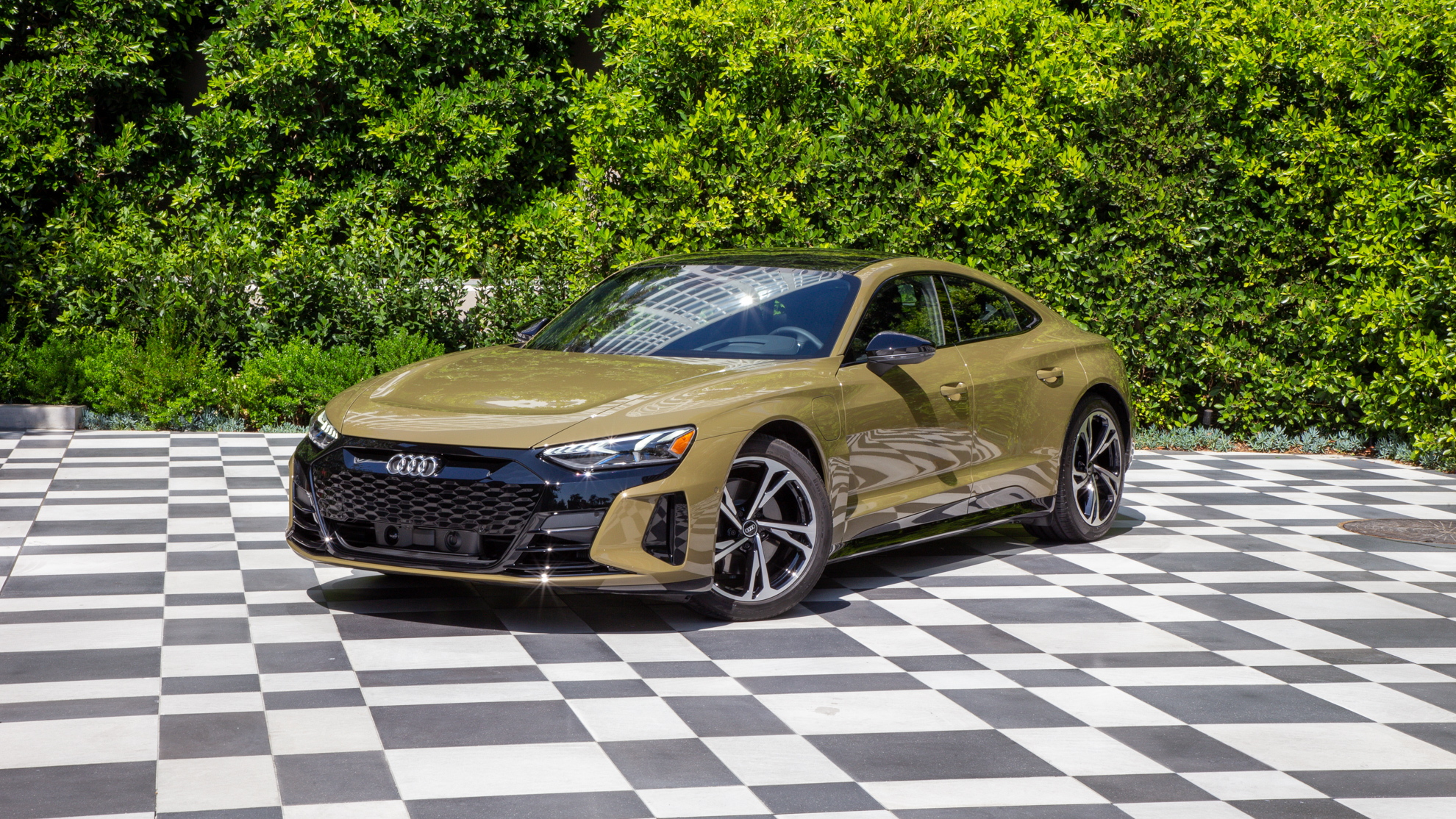 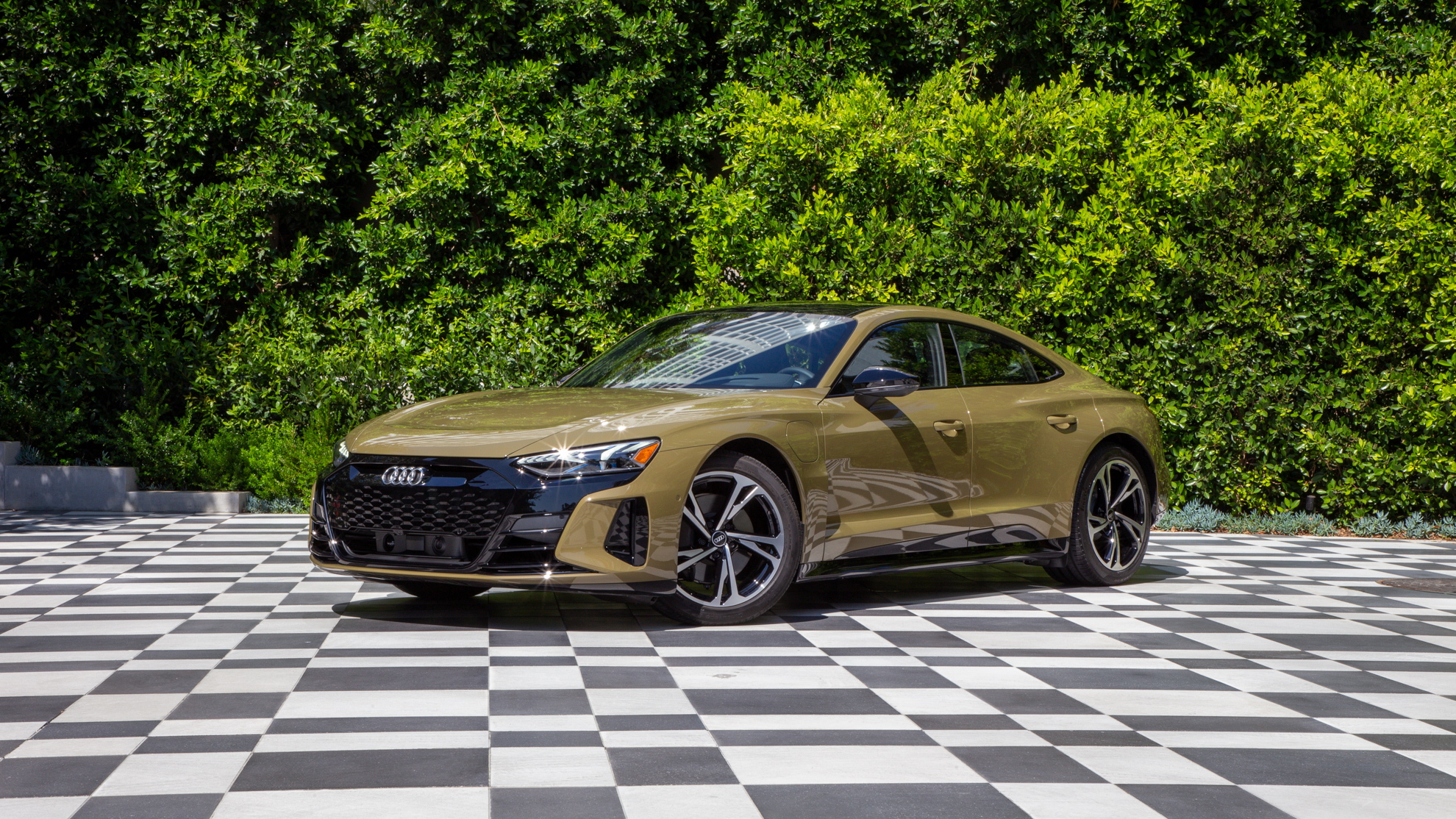 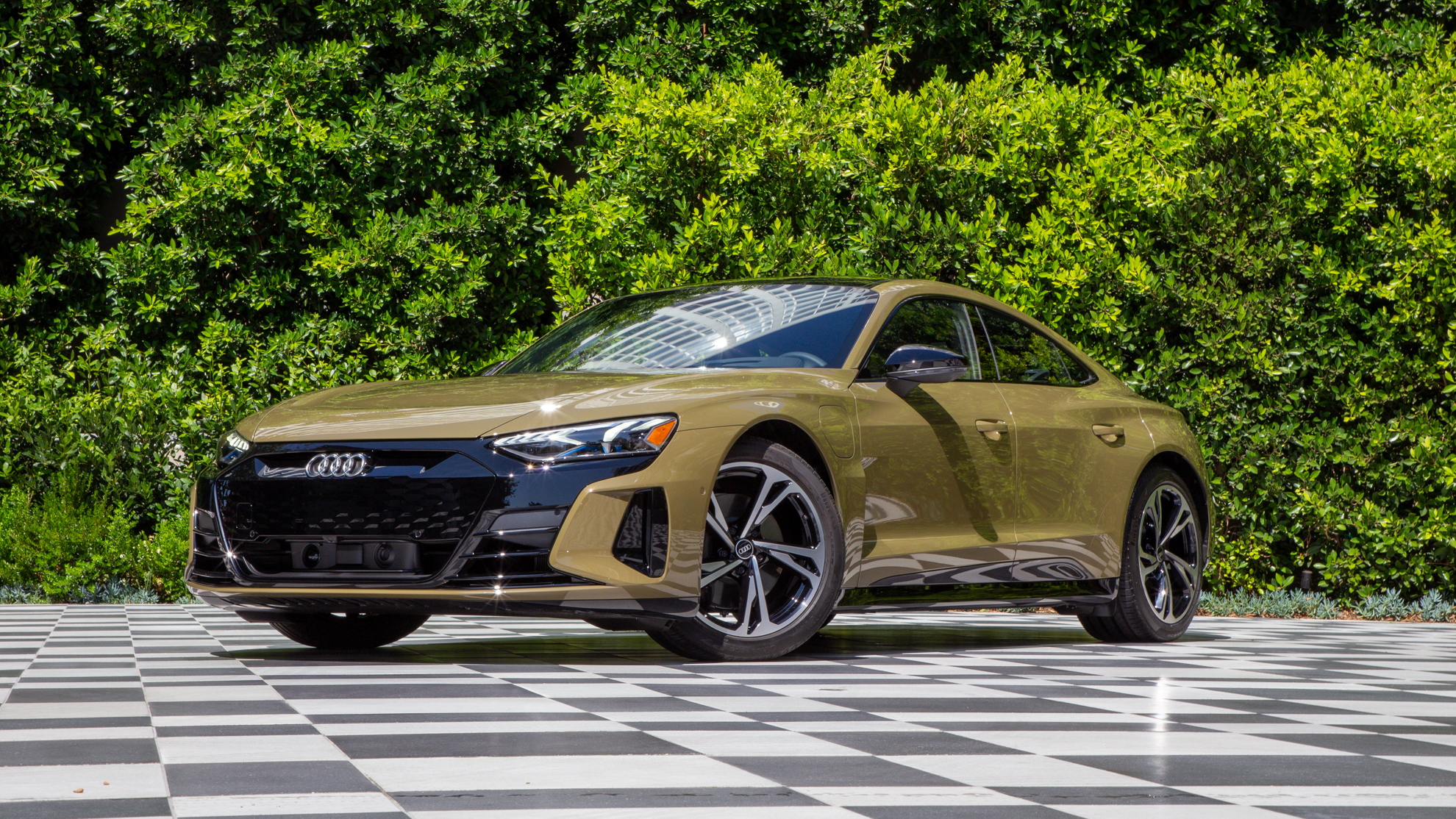 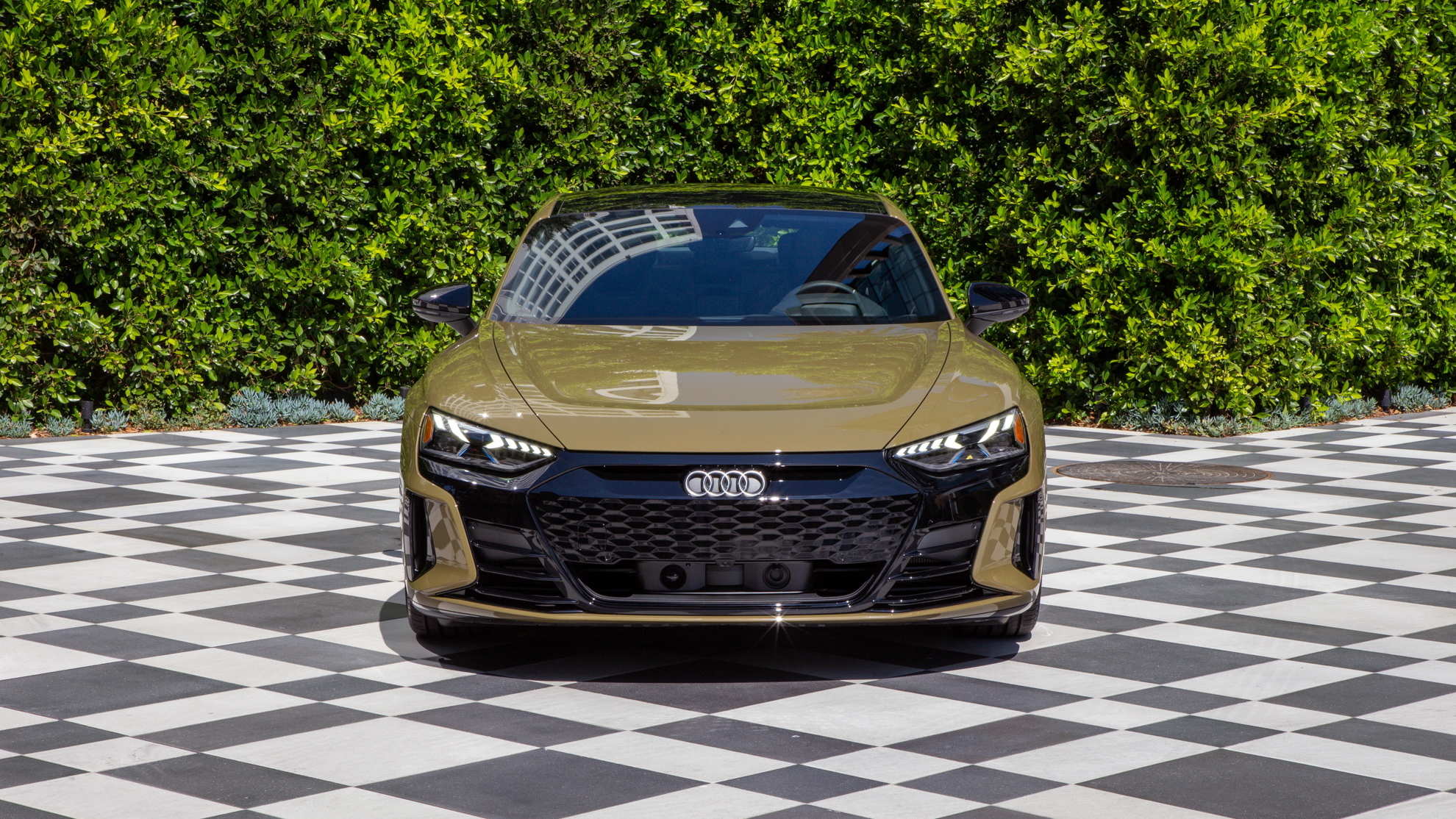 The 2022 Audi E-Tron GT and the RS E-Tron GT have arrived, giving Audi a pair of wonderfully sleek and futuristic electric vehicles that its E-Tron SUV and Sportback pair just can’t match in panache or curb appeal. But these aesthetics are not the only thing that makes the E-Tron GT so anticipated; it rides on solid bones, sharing its platform with the high-performance Porsche Taycan that’s delighted us so much.

Audi and Porsche both reside under the Volkswagen umbrella, and the same J1 electric-car platform sits underneath each vehicle. They all share similarly sized 93.4-kwh batteries and feature the same dual motor all-wheel drive setup, with a 2-speed gearbox tied to the rear motor.

This makes the cars natural competitors, despite Audi and Porsche talking points. But there are more than a few important differences, because in addition to design, each company was responsible on its own to tune the suspension, steering, and throttle response. I spent the morning in an E-Tron GT and the afternoon in an RS, driving over mountain roads surrounding Los Angeles, to find where the two automakers split on philosophy, with a bonus stop at an airstrip to test the RS version’s acceleration in a safe environment.

While the E-Tron GT and the RS have the same battery and electric motors, they differ widely in power output thanks to software tweaks. The regular E-Tron GT produces 496 hp and 464 lb-ft of torque, which can be boosted up to 522 hp and 472 lb-ft for short bursts as needed. It’s no slouch, with a 0-60 mph time of 3.9 seconds, and some solid throttle response of its own. But it does feel like the E-Tron GT runs out of steam when accelerating past 70 mph. It’s still got plenty of power for passing, just without the same snappiness you find at lower speeds.

There are no such problems in the RS. It tops the power numbers of the E-Tron GT by a wide margin: 590 hp and 612 lb-ft of torque, with a peak of 637 hp when boosted (the torque figure remains the same). The RS’ peak electrical output from the battery—a difference in inverters—is 440 kw versus only 350 kw for the E-Tron GT, which explains the difference in power.

The RS’ best quality is its straight line acceleration, as proven over multiple 0-100 mph runs made on the airstrip. Unlike the E-Tron GT, the RS pulls and keeps pulling well into the triple digits. Audi gives the RS an estimated 0-60 mph time of 3.1 seconds, placing it slightly behind the Taycan Turbo’s 3.0 seconds—on paper at least.

That 3.1-second number is conservative. I was able to put up an instrument tested 0-60 mph run of 2.99 seconds with relative ease using the launch control. And in less than a quarter mile, I got the RS up to 114 mph. It’s not a Model S Plaid or the Taycan Turbo S, but it’s got absolutely silly speed by any rational measure.

I was also very impressed that the RS was able to put up that kind of time in non-ideal conditions. The runs took place on a regular runway, not a prepped surface with any extra stick for the start. It was also done in 100-degree temperatures and my test vehicle had also just completed three slalom runs with the A/C and seat coolers blasting as well (though I quickly switched those off for the 0-100 run to pull the best time).

Despite these powertrain differences the range estimates between the two vehicles (both still unconfirmed by the EPA) are very close: 238 miles for the E-Tron GT and 232 miles for the RS. This drive did not provide an accurate range test, with long stretches on the Angeles Crest Highway. While this offered a suitable environment to test the car’s handling, I managed just 1.5 miles/kwh according to the trip computer thanks to some lead-footedness.

Apart from the snappy throttle response, driving the E-Tron GT felt much like driving a more conventional vehicle. There is also no one-pedal driving capability in either model and the braking regeneration is rather non-intrusive, letting the car glide quite freely in most circumstances. Future Audi products may offer such a feature, but it seems to have intentionally been left out here for a more traditional experience.

The drive over the mountains gave the best indicator as to where the E-Tron GT and the RS line up against the Taycan, as both vehicles seem to have traded sportier aspirations for a more comfortable, grand-touring type feel (as the GT in the name would suggest). The two cars have the exact same three-chamber air suspension with three suspension settings of various firmness. This setup does a wonderful job of keeping the Audis composed, even in its firmest setting the ride never devolves into choppiness—though on rough roads, be prepared for an intrusion of noise that interrupts the otherwise serene cabin.

Our testing of the Taycan has revealed it to be a sharp handling car, and while the E-Tron GT possesses good balance and a decent amount of grip, its steering is just not in the same league. This is not the first Audi vehicle (even among the high-performance models) where I’ve been bothered by a lack of feedback. In the RS it feels unforgivable, given that Audi’s other RS models at least offer you the chance to turn up the weight. In the RS E-Tron GT, your only customizations are the suspension, throttle response, and “engine” noise settings.

That’s right, RS models will also feature a unique “E-Tron sport sound” that was created from 32 individual sounds all mixed together. The end result is a spaceship-esque whoosh that gets projected from two speakers inside and two speakers outside the vehicle, with the volume dependent on drive mode (Dynamic being the loudest).

Watching the RS make its runs down the airstrip, the sound is easy to pick out whether you’re inside or outside the vehicle. A pet peeve of ours is when these systems can’t be turned off and the good news here is that you can, by way of the RS’ individual drive mode. The suspension and throttle response can still be turned up to their sportiest settings without the augmented noise.

The E-Tron GT’s interior offers the requisite comfort and materials quality expected from a six-figure car. Leather-free upholstery is standard as well, though each of the cars I tested both added full leather seating. The Audi’s front seats are a delight, with good support all-around and I left the car in the afternoon after nearly 6 hours behind the wheel without any of the creaks and groans from my back that my mid-thirties have started to expose.

Accommodations are not as comfortable in the backseat, it’s a tight fit back there. Anyone over six-feet tall will find both legroom and headroom to be at a premium; I only just fit behind myself with about an inch of legroom to spare and I’m 5’11. The E-Tron GT comes with a standard panoramic glass roof that helps the cabin feel more airy, but the RS has a carbon-fiber fixed roof that adds to the claustrophobia.

Despite the ultra-futuristic styling and noises the car makes, Audi made an old-school decision for the dashboard by neglecting to go for its two-screen center stack that shifts the climate controls onto another touchscreen lower in the driver’s sightlines. Instead, you get conventional switches and buttons that are much easier to use. Audi says this choice was made consciously, to keep the driver’s attention on the virtual cockpit, with the multimedia screen occasionally. I think that logic should apply to the rest of the lineup as well.

Between the two vehicles, the RS is the more entertaining and appealing model but there is such a wide price disparity between them that I’m not sure it’s the one I would get.

The E-Tron GT was a Prestige model that starts at $108,145, which added on the Performance Package ($6,000), Full Leather Interior Package ($4,000) and an appealing Tactical Green paint job ($595). Adding the performance package tacks on e-torque vectoring+, rear-wheel steering, power steering plus (adds boost at low speeds for easier maneuvering), and Audi laser headlights among a few more cosmetic additions. E-torque vectoring+ adds a lock rear differential and will brake the inside wheel when cornering to help steer the E-Tron GT through turns. Most of those features are standard on the RS (except the rear wheel steering), so the addition of this package brings the E-Tron GT closer to its counterpart. The final sticker price was $118,470.

My RS test vehicle was a Year One edition. That package has a $20,350 price tag and adds on every option available to the vehicle as well as 21-inch wheels, carbon ceramic brakes, and a black and red interior. Despite the name, the Year One package will not be production-limited. Audi says it will build as many RS models with this setup as are ordered, and for the first year of production at least this will be the only way to get the upgraded brakes. That brought the final price all the way up to $161,890.

In an E-Tron GT you can have 90% of the fun for a lot less money, and given that the RS doesn’t offer any suspension or steering upgrades of its own, it gives the “base” model that much more appeal. With neither of the pair offering a truly sporty driving experience, if you don’t need face-melting acceleration and can instead settle for face stretching acceleration, go for the E-Tron GT.

Compared to the playful Taycan, the E-Tron GT duo opts for a more sedate, mature driving experience. It’d be easy to hop behind the wheel of either, drive its full range down to the bone, and hop out feeling just as springy as when you sat down. Sometimes when a car tells us what it is in the name, it’s best to just listen.

Audi provided a night at a hotel, rented an airstrip, and handed out face masks to allow Green Car Reports to bring you this firsthand drive report.