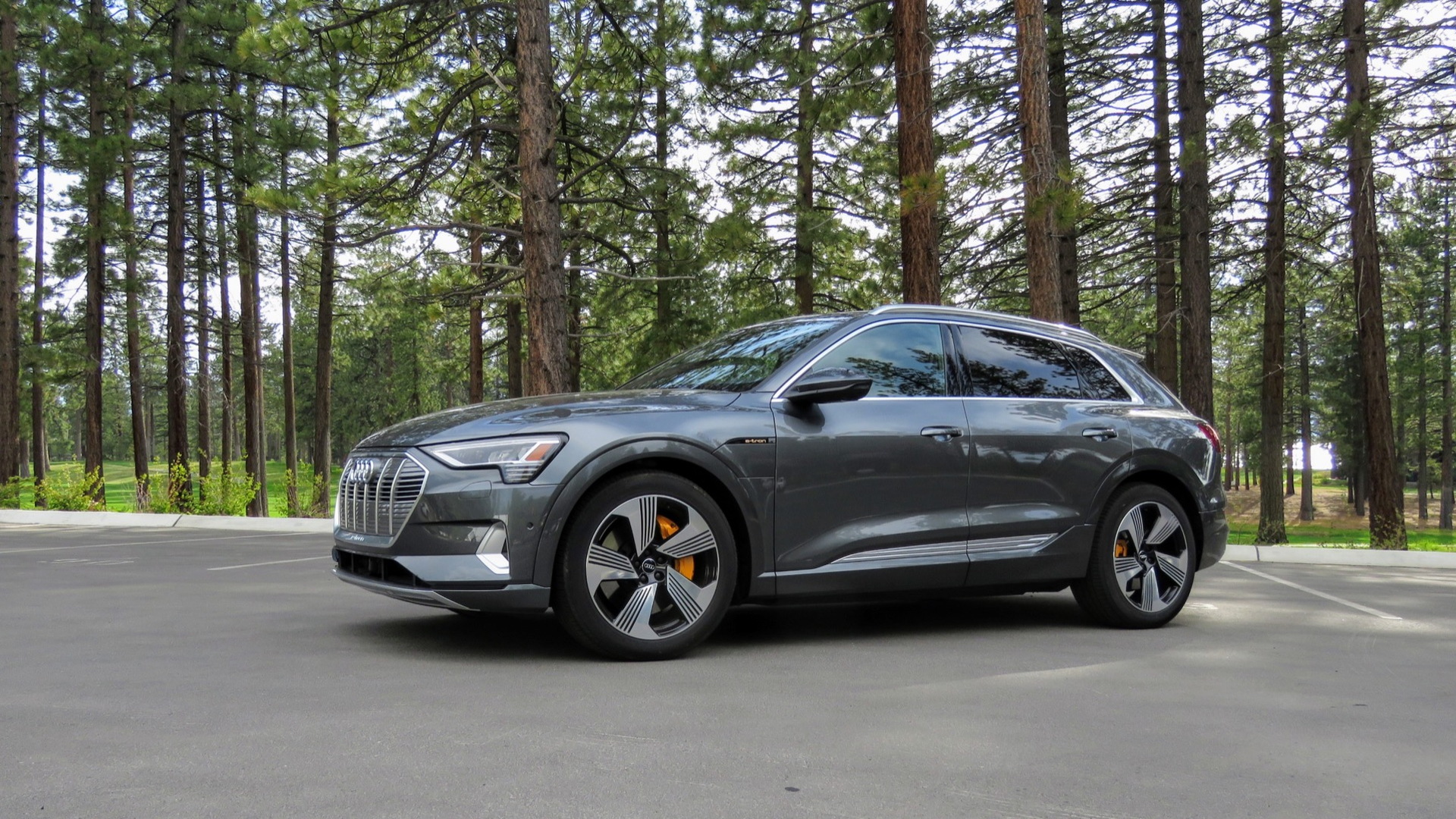 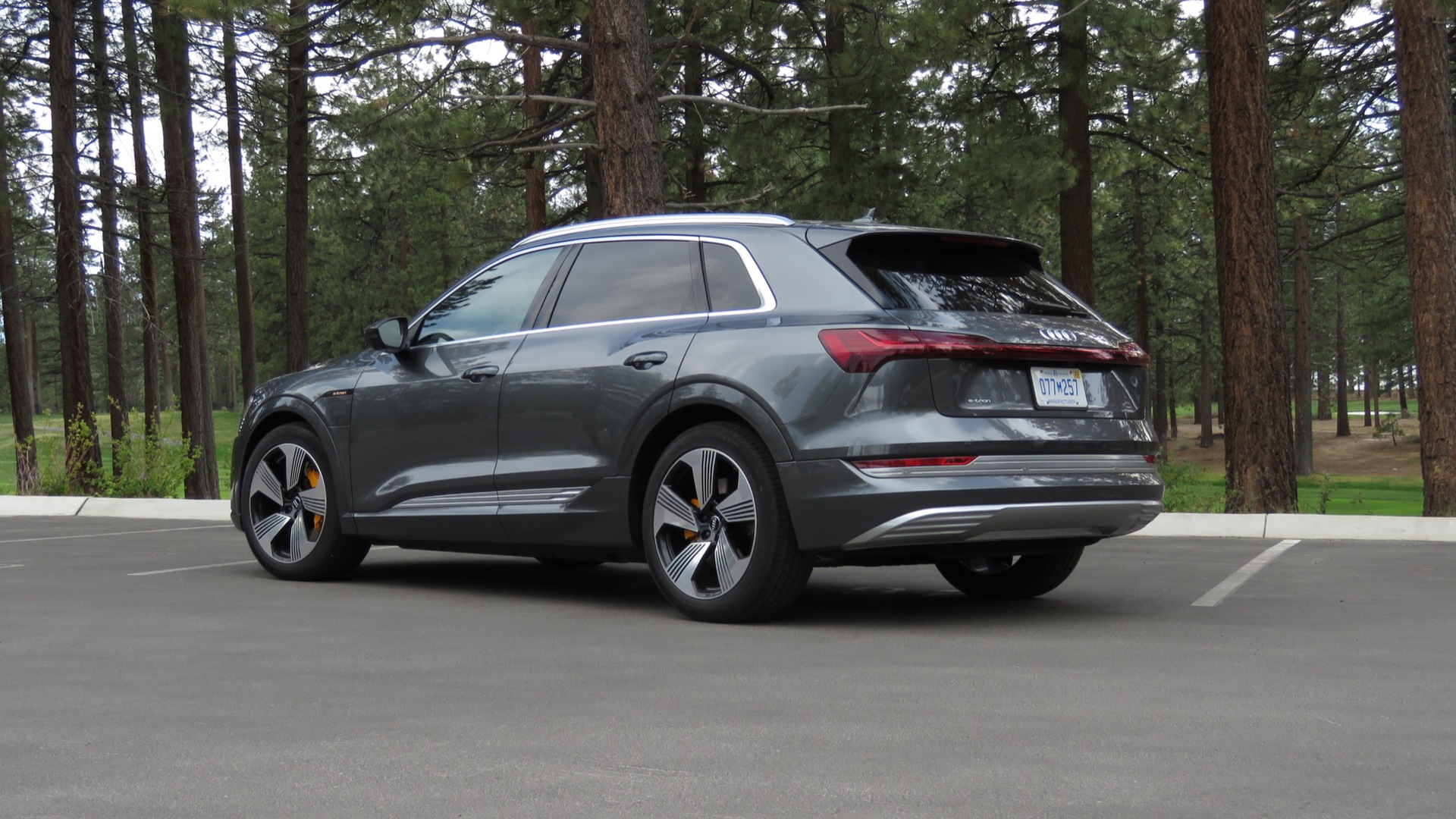 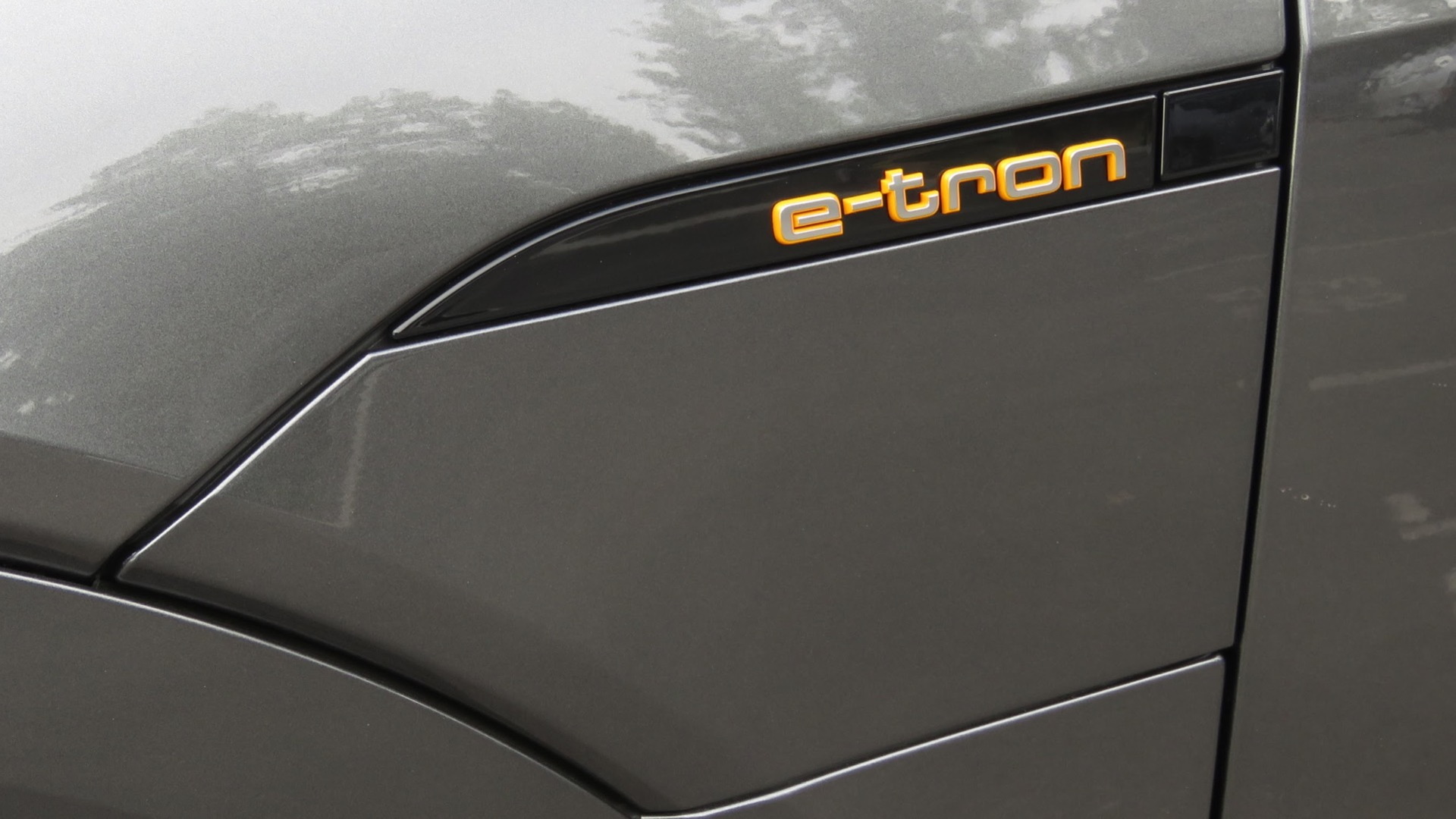 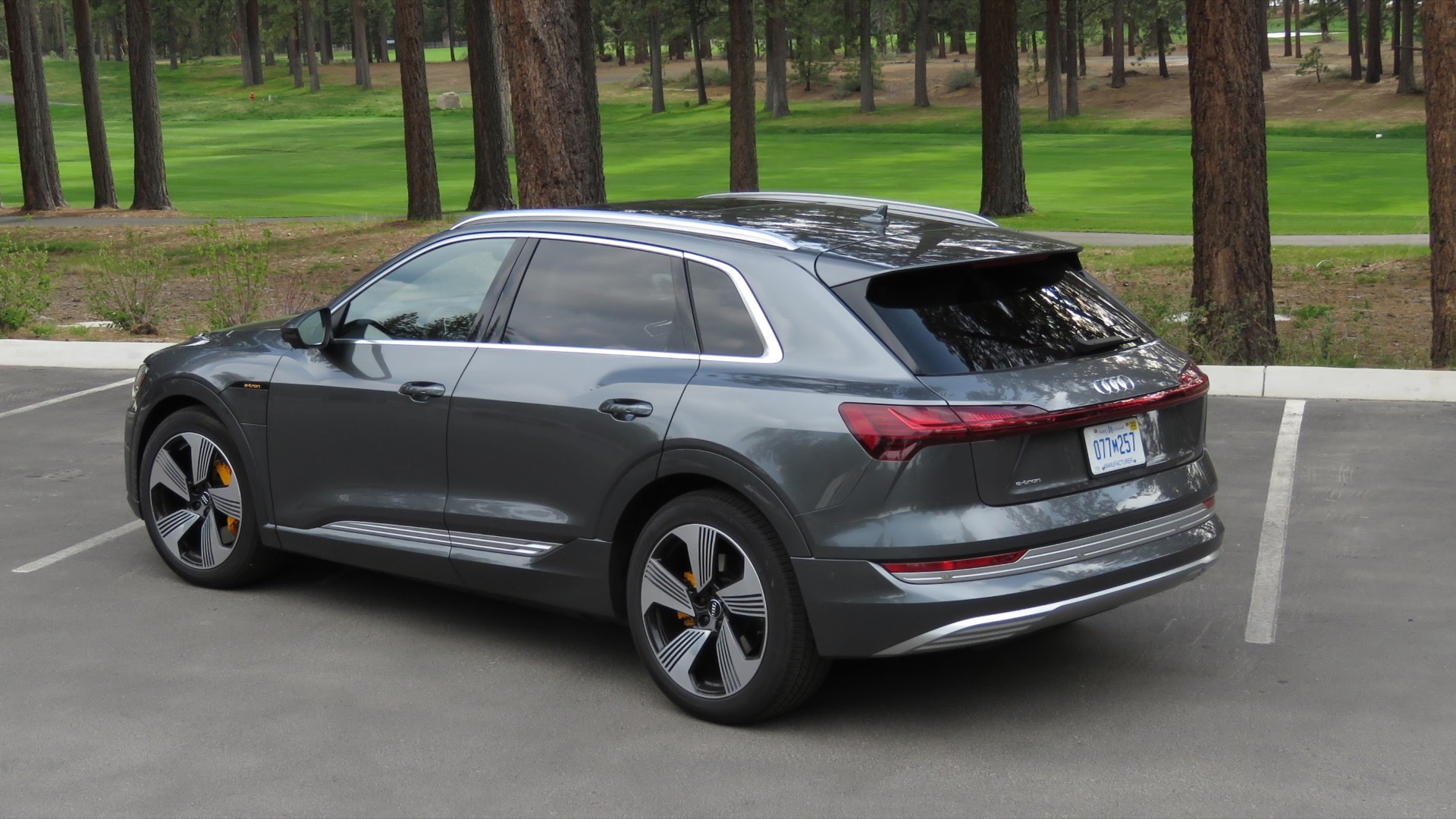 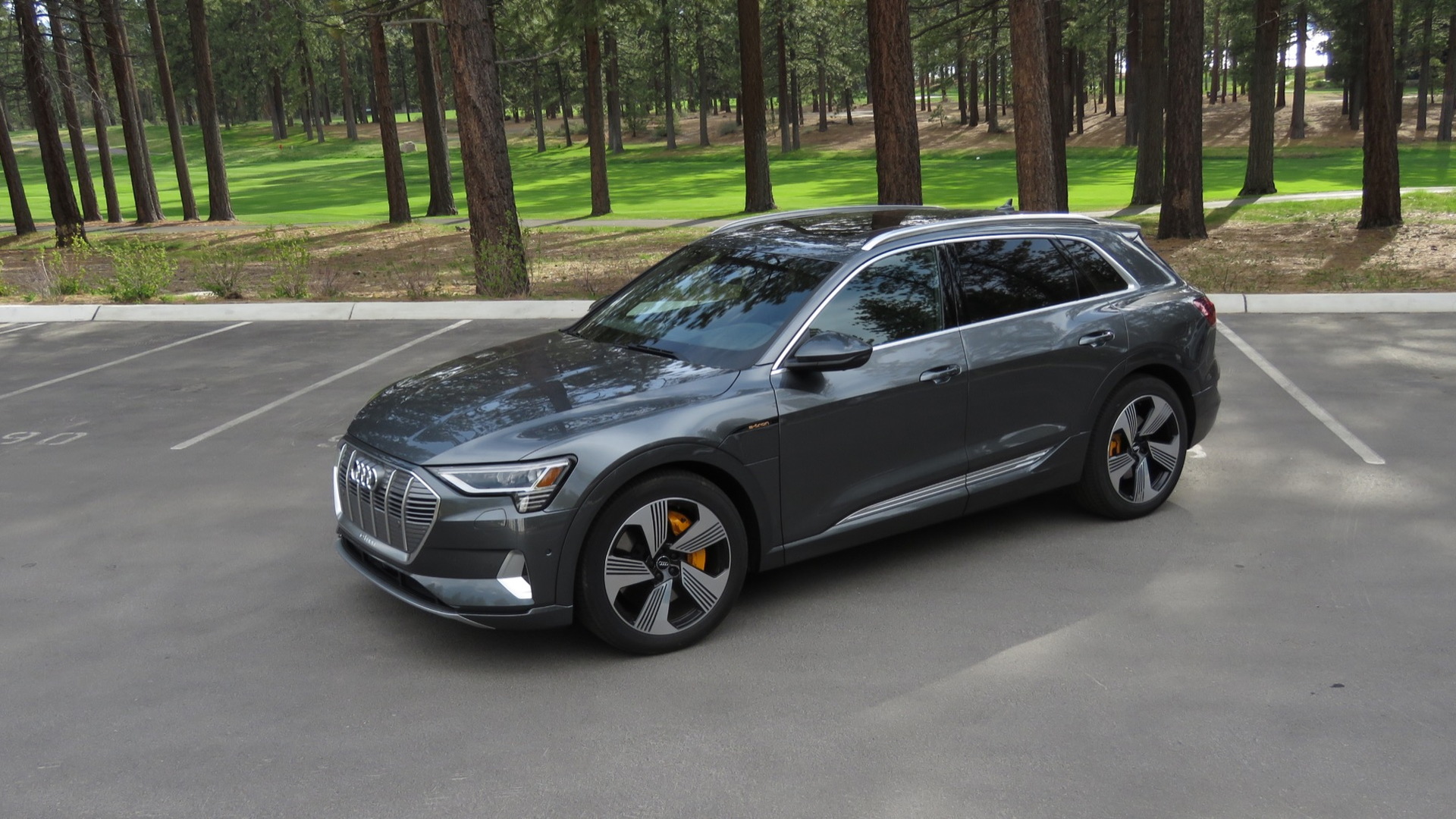 Not every electric-car first-drive event urges us to climb a mountain to get a good idea of driving range.

Actually make that no other automaker, ever. But that’s what Audi had us do with its 2019 E-tron electric SUV: drive it on a prescribed route that took us nearly 195 miles from Yountville, California (102 feet elevation) and over 7,427-foot Echo Summit along U.S. Highway 50.

The strategy to take the demanding route stems from a hard reality: Audi has a lot to prove with its E-tron.

Earlier this spring, its EPA range ratings were released at just 204 miles—underwhelming considering the E-tron has a big 95-kwh battery pack. Its EPA-rated efficiency stands at just 74 miles per gallon equivalent (MPGe) combined, which equates to about 46 kwh per 100 miles, or 2.2 miles per kwh.

A first drive in December gave us enough of a sample of the E-tron to recognize that it’s the spacious, versatile, rugged pick among other electric crossovers, and better for families than the Model X (or, we can now say, than the upcoming 2020 Mercedes-Benz EQC). What we hadn’t done is sample how far the E-tron goes in real-world driving conditions, and whether it charges as quickly as claimed.

Now we have a good idea of that.

With this road trip, Audi wanted to prove that in real-world conditions its driving range is—to borrow a term from the Rolls-Royce and Bentley lexicon—sufficient.

Not just going the distance, going for speed

But there’s more to it, and charging is the flip side. Manufacturers commonly note that electric-vehicle owners charge at home 80 to 90 percent of the time. While lower-power Level 2 chargers may work most other times, at work or at overnight destinations, the real litmus test for an EV comes in the fringe cases—when you’re traveling long-distance and need to get charged-up in about the time it takes to grab lunch.

To that end, Audi also aimed to demonstrate what differentiates the E-tron from every other currently available electric vehicle on the market (including those from Tesla): On speedy new 150-kw CCS DC (Combo) fast-charging equipment, the E-tron can charge up to 80 percent charge in about 30 minutes, or fully charge in about 45 minutes.

Although Audi's claimed 52 miles of range regained in 10 minutes still doesn't keep up with Tesla's current vehicles—or with Tesla's claims of up to 75 miles in five minutes with upcoming V3 hardware—Audi's argument is this: You probably only need to stop once on the way somewhere for the weekend, and their system lets you easily leave a charging stop with a full charge.

What happens here [provided to us via Audi and EA] between 80 and 100 percent is a boon to usability: Audi has no qualms with you fast-charging the E-tron up to 100 percent, and it’s actually engineered it to play well with the idea that you might want to top off quickly.

After plugging in at a 150-kw Electrify America station that had just opened two weeks before our visit (part of Electrify America’s Cycle 1 plan, required by the VW diesel settlement), the E-tron charged exactly as claimed, bringing our 59-percent charge up to 99 percent in less than 30 minutes. As our charge session surged past 80 and 85 percent, and even as it passed 97 and 98 percent, there was no big slowdown, no excruciatingly long wait. It was still charging at nearly 50 kw at 99 percent.

That full charge matters because at least at 150 kw and up, there won’t be for some time the fast-charging redundancy in locations that Tesla owners have enjoyed on road trips. Although E-tron drivers can use legacy 50-kw fast-charging stations, it’s a big pack, at an official 95 kwh, so a charge to 80 percent takes more like 90 minutes.

It’ll get better eventually. EA’s Cycle 1 includes more than 2,000 fast chargers at 484 sites. Cycle 2, which starts this summer, and targets completion by December 2021, will add more highway stations, and other networks like EVgo are building out additional 150- and 350-kw fast chargers.

Audi has a different approach to how it treats its battery pack, though, and it’s part-and-parcel to making the state of charge predictable. It only uses 88 percent (83.6 kwh) of the 95-kwh total cell capacity in its pack, in the interest of a long life, more consistent range performance, and better thermal management.

Audi’s been preaching that thermal management tack all along. Coolant is circulated in a thin sandwich layer beneath the modules, where it can drain away in an extreme crash (helping prevent further damage). Through pumps, valving, and temperature monitoring (all sealed for life and maintenance-free) the pack’s kept in its sweet spot to be ready for DC fast charging at peak- or near-peak charging rates—which gives it a potential advantage over the upcoming Mercedes-Benz EQC or even updated Tesla vehicles.

Even though charging was Audi’s secret-sauce argument for making the E-tron work well for road trips, it turned out its real-world range isn’t too shabby. The route took us from Yountville, California, via I-80 and SR-128, to Sacramento, where we recharged to 99 percent. We then traveled to South Lake Tahoe, via a side loop to Emerald Bay, on Lake Tahoe. After going 119 miles from Sacramento up, up, up to South Lake Tahoe, we had an indicated 51 miles remaining, according to the trip computer.

The total trip distance (with the charge along the way) was an indicated 193.5 miles, with an average efficiency of 2.0 miles per kwh, according to the vehicle’s trip computer. In that steep-climb use, this suggests the E-tron return a range of about 167 miles even here. Our driving style was far from gentle and eco-minded; we used the climate control the whole way, and we tapped into the E-tron’s full-throttle Boost Mode—activated by shifting into “S” then pressing the accelerator past its detent—at least a couple of times.

After a charge to 75 percent, Audi drove our car another approximately 55 miles, to Reno, Nevada (elevation 4,506) before crunching its final numbers, for a total trip distance of 248 miles, and said given the efficiency that our vehicle returned (2.21 miles per kwh by then), it had a calculated range estimate of 184 miles—just 20 miles below the official EPA range.

That’s not a bad showing at all considering the full route included 16,759 feet of ascent and 12,441 feet of descent.

The outside temperatures during our drive ranged from 57 to 75 degrees—pretty close to the best zone for today’s automotive lithium-ion cells, so the thermal systems likely weren’t taxed.

Road-tripping in the E-tron

How was the road trip itself, when we weren’t hyper-focused on the trip computer? Serene as a passenger, comfortably engaging as a driver.

The next morning we moved to the front seats and enjoyed the multicontour seats with great thigh and back support. Fresh off a drive of the Mercedes-Benz EQC the previous week, we found the E-tron’s seating position to be a little more carlike, with a ride that isn’t as pillowy as the EQC but had a slightly sportier, more vivid feel on the road. This was also our first time experiencing the E-tron with normal side mirrors, which add depth perception that the high-tech substitute lacked.

We aimed to keep up with traffic and not baby this electric SUV; but having already brought the E-tron up to about 100 mph on pavement and off-roaded in the sand on an earlier first drive of the E-tron, we didn’t go above a peak of about 77 mph on the freeway. Based on instantaneous readouts it looks like the E-tron reaches an efficiency cliff just past 70 mph— we kept closer to that number for most of the trip.

The E-tron comes with a reskinned version of Audi’s digital instrument cluster, with two primary layouts that closely echo what it offers in its gasoline models. Audi aims to keep you from fretting over each percentage of battery capacity, but you can access it via the center screen.

Just a few interface choices seemed a little out of place. The fingertip shifter falls into the gimmicky bin, and the two touchscreens of Audi’s MMI Touch Response infotainment system (10.1-inch up top and 8.6-inch below) require you to take your eyes off the road for too long, especially for climate control functions on the lower screen. The lack of idle creep (when you lift your foot from the brake, for instance) is an odd omission in a vehicle that’s otherwise intended to mimic the behavior of Audi’s gasoline vehicles.

Like any good German vehicle, the E-tron offers modes—lots of modes. But it doesn’t require as much familiarization with the interface as with some other EVs—and that’s partly representative of how Audi has achieved its goal of making this vehicle drive just like any other Audi. The Drive Select button at the center of the dash can access Auto, Comfort, Efficiency, Individual, Offroad, and Allroad modes, varying the air-spring suspension by 3.0 inches in all; and there are separate toggles for Comfortable, Balanced, and Dynamic modes for the steering and ride.

Outside a complex and sometimes-confounding Automatic mode for brake regeneration, three levels of regen tap into a maximum of 0.18g through the paddles, but you can get up to 0.3g when you step on the brake pedal—operating a system that’s unique among EVs in that it won’t activate the brake pads until you need more than that brake force.

Our test E-tron cost $87,695, including the $995 destination fee, and was one of the 999 First Edition versions that include gray metallic paint, a black leather interior, a night vision system, bright orange brake calipers, and 21-inch wheels. The starting price of the E-tron is $75,795, not counting its eligibility for the $7,500 federal EV tax credit.

After a couple of days with the E-tron, we have a much better idea how it compares to the Tesla Model X and others—and more confidence in it as a “no surprises” pick. By focusing where it counts, Audi is helping make sure your road trip keeps its cool—just like the E-tron’s battery pack.

Audi supplied travel, accommodation, and some meals to Internet Brands Automotive in order to facilitate this report. Also, some of the key claims in this piece rest on data supplied by Audi and not verified through our own independent means.