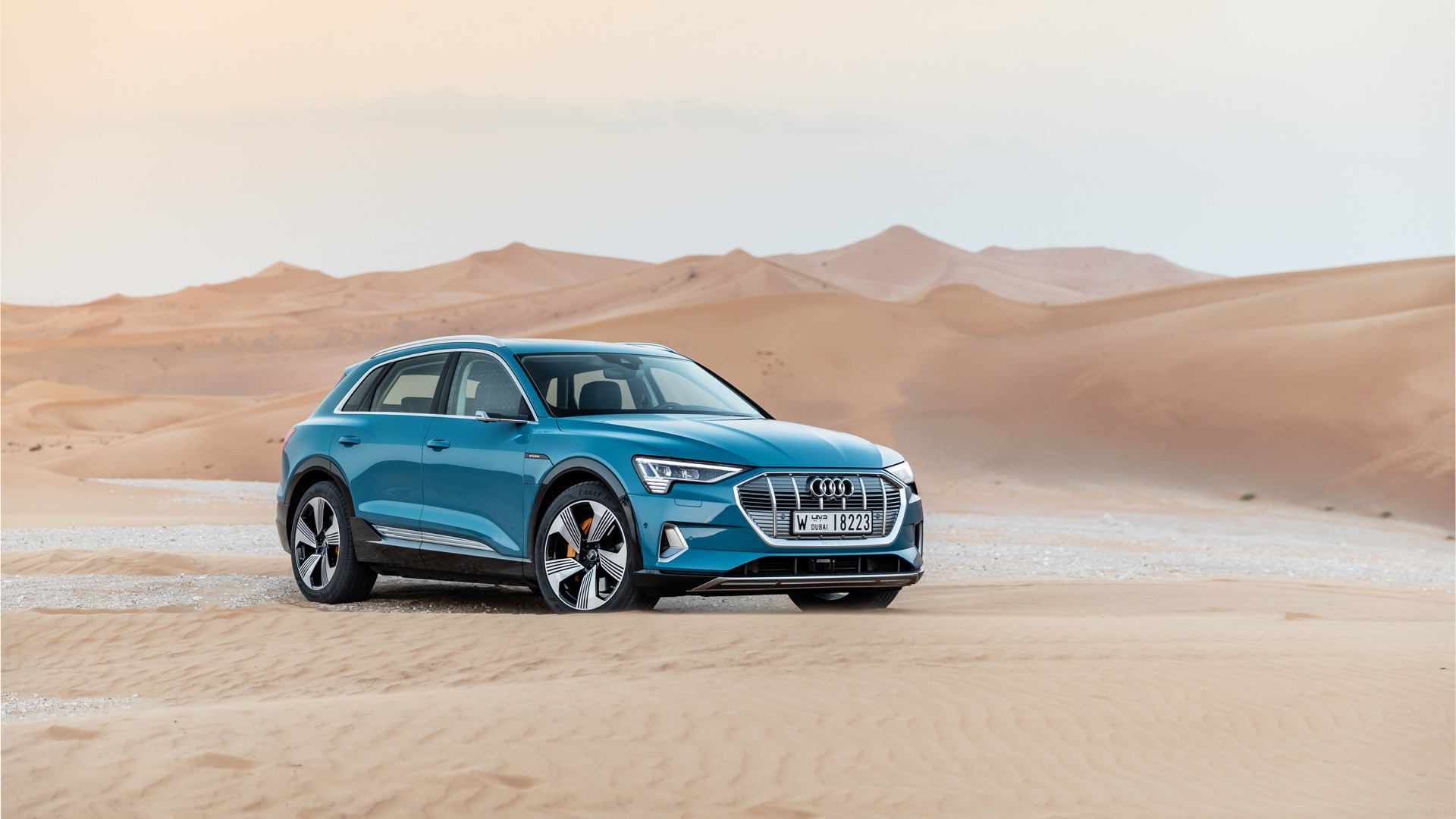 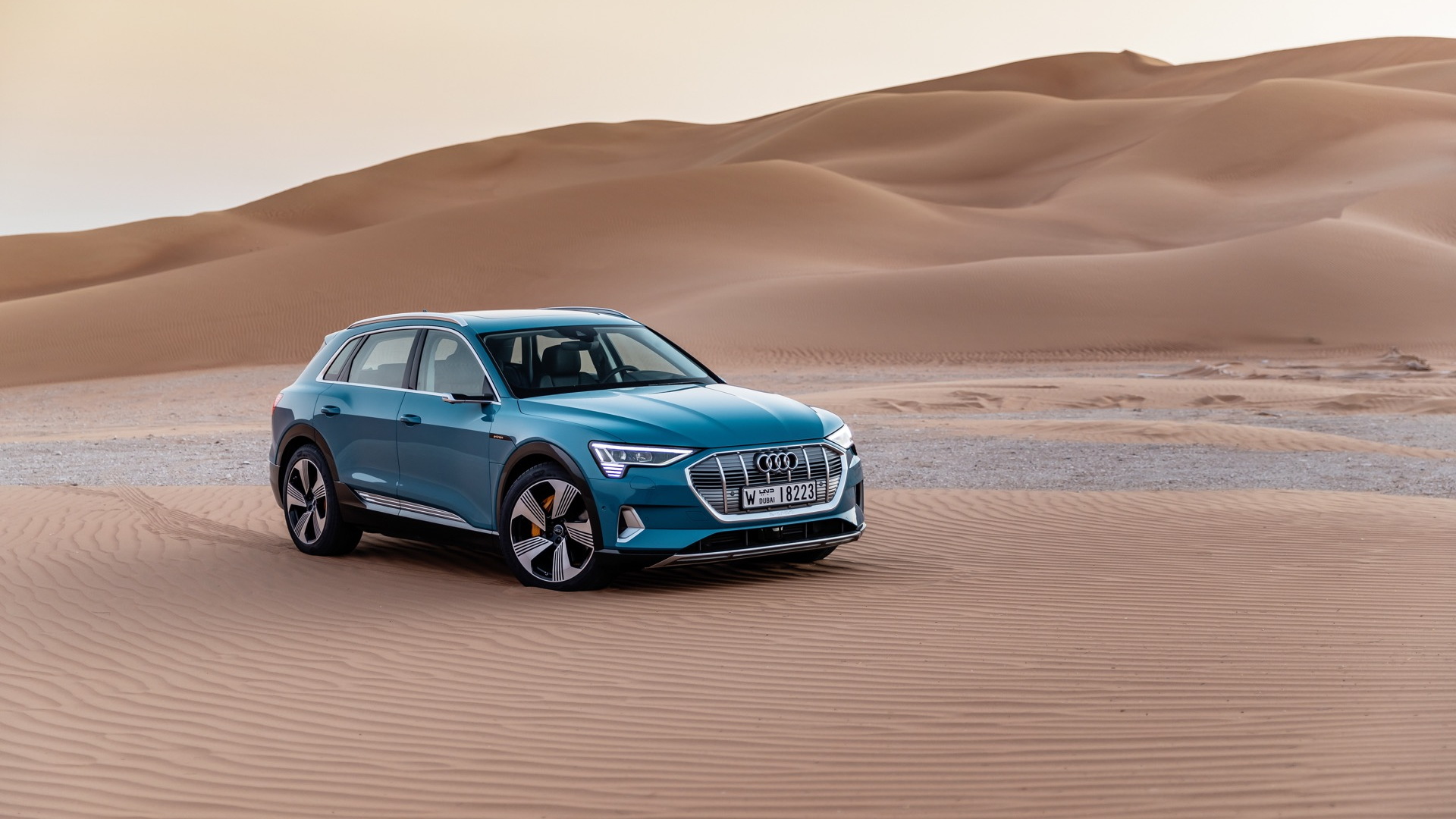 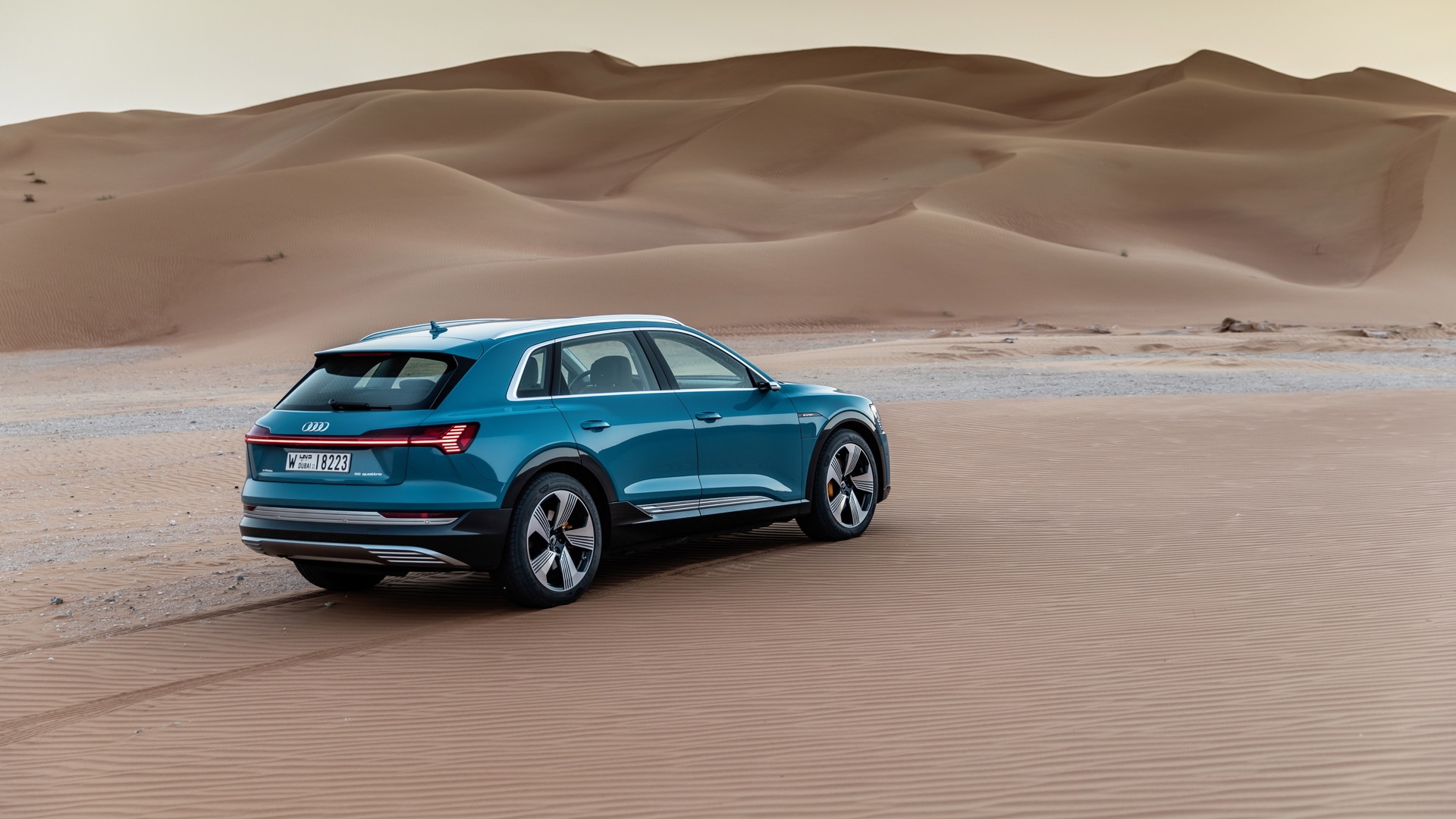 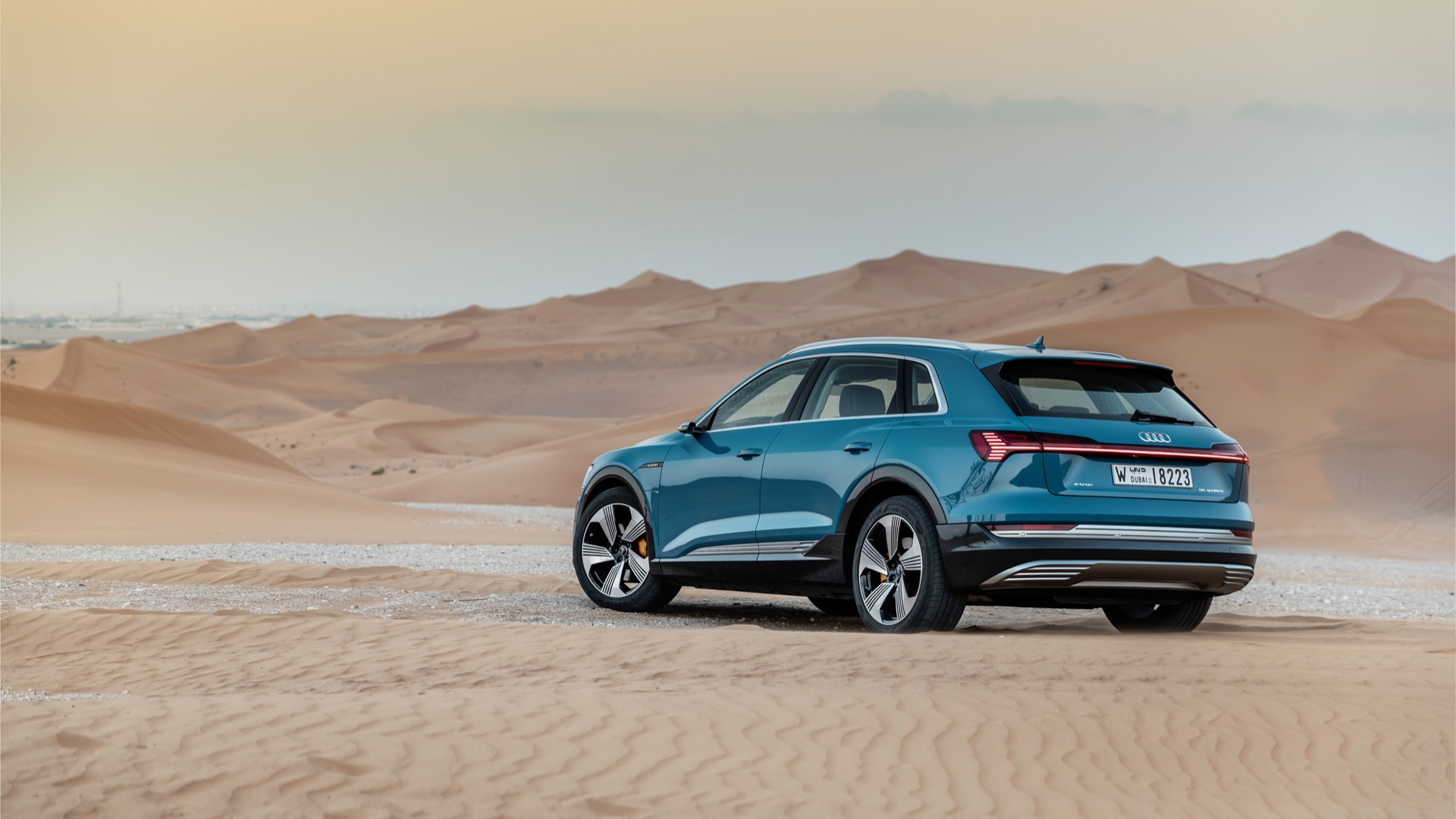 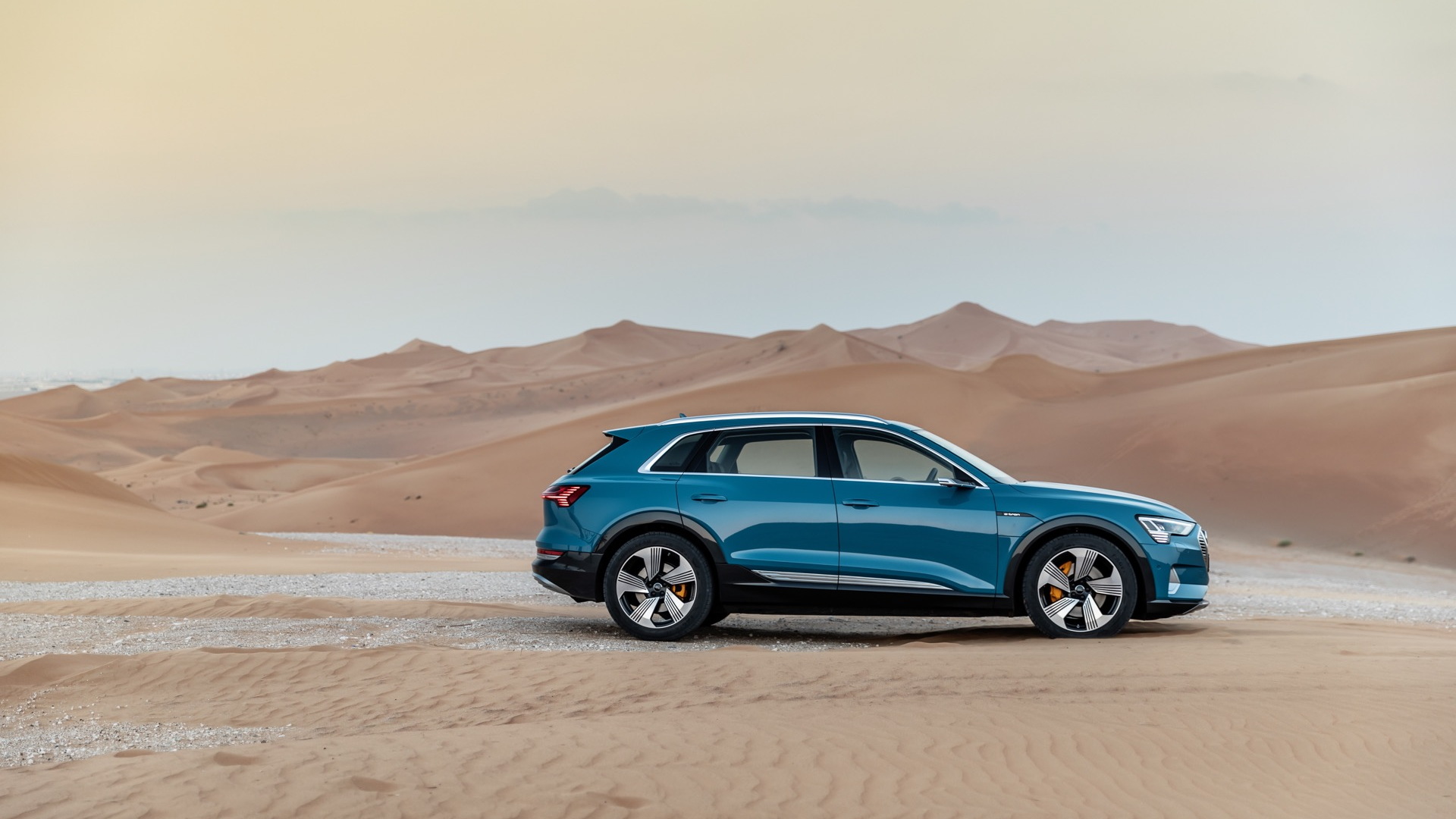 Road-tripping along in the 2019 Audi e-tron, your passenger might not even know (or care) that you’re in an all-electric utility vehicle—rather than just an extraordinarily quiet gasoline one. And as the driver, you might even forget.

It gets right to Audi’s point behind the e-tron, which is to make a vehicle that’s an Audi through and through, but electric. The e-tron makes no overtures to woo the Tesla crowd or EV fans; there’s no potentially busy-feeling one-pedal driving, no significant motor whine, and no radically different interface.

Likewise, the e-tron’s design doesn’t stand out from the rest of the Audi lineup, and from a distance it might register as a somewhat low-set Q7, or a larger member of the Allroad family.

For Audi to find the electric sweet spot in something so familiar, it had to redraw some of the brand's own boundaries.

Take the United Arab Emirates, for example, where we drove the e-tron. The nation sits on about 8 percent of the world’s (developed) oil reserves; highways are wide; gas-guzzling SUVs are popular; elaborate gardens feed on energy-dependent desalinated water; and, at least on the surface, an opulent consumer culture prevails. And yet the nation is hard at work to reduce the use of its oil and gas reserves. Masdar City is a hub for clean-tech innovation, environmental research, and clean-energy deployment, and a blueprint for low-impact living.

Audi, with all the riches of its sales gains and successes over the past decade, sees the e-tron as its own blueprint for the future—a foothold into a growing segment of the market, and a product for Audi fans and families who want to go electric.

As we found out during a nearly 300-mile drive last week, Audi’s unique decisions for the e-tron resulted in a vehicle that drives differently than any existing electric crossover.

One of those decisions was to use its own, internally designed asynchronous (current-excited) wound motors. Audi says they provide efficiency gains at high speed while cutting the dependence on rare-earth materials; Audi’s power electronics can overcome the design’s disadvantage in off-the-line performance.

Like other electric utility vehicles, the e-tron feels sneaky-quick and faster than its 0-60 mph time of 5.5 seconds suggests with its combination of pin-you-back, fraction-of-a-second responsiveness and no-drama traction.

Audi’s Drive Select system has a slew of other modes, too: Auto, Comfort, Efficiency, Individual, Offroad, and Allroad, and the air-spring suspension varies the ride height by 3.0 inches in all. In addition to the other drive modes, the steering and ride toggles between Comfortable, Balanced, and Dynamic modes.

We found the e-tron to be very easy to place within lanes, easy to maneuver into parking spaces, and well-coordinated on mountain-road esses. Ride comfort is quite good, and Audi's gone above and beyond with seemingly countless measures to keep the cabin quiet—all without the use of active noise cancellation.

The brakes are confidence-inspiring, too. Instead of having a hydraulic system that’s always engaged, requiring regenerative braking to be blended in and out, the e-tron uses a layered approach. Any braking of 0.3g or less is done solely by the motor/generators, regardless of speed, while the amount past that is done by the brake pads and an electrohydraulic system that, in milliseconds, pushes fluid into the brake lines according to pedal input. A “dummy” piston keeps pedal pressure reassuring and consistent.

Part and parcel to the way the brakes are designed, Audi has not conceived the e-tron for one-pedal driving. Selecting the manual recuperation mode from the touchscreen allows you to use the paddle-shifters to lock in one of the three regen modes. The first is essentially a coast mode, in which (with a minor voltage applied to the motor) there’s no additional drag torque.

The highest level of paddle regeneration gives you about 0.18g, tuned in a way that encourages you to use the brake pedal. The default setting for regeneration is “Automatic,” which considers a wide range of factors that includes map data but left us puzzled in a few spots, such as when we intended to coast through a roundabout, but just as we were sweeping rapidly into its circular flow the system suddenly (and awkwardly) slowed us with more brake regen.

Audi also decided not to offer idle creep. And an official told us, in a relatively late-stage decision, they decided not to include a switch to toggle one on.

The EPA hasn’t yet released range ratings, and Audi only says that it expects the EPA number to land somewhere below (but not far below) the 248-mile WLTP rating.

Our drive was hardly representative of real conditions most U.S. drivers will see daily. Audi included a climb nearly to the summit of one of the tallest mountains in UAE—about 5,000 feet—to demonstrate the e-tron’s very productive brake regeneration.

On our most level stretch of the day, which included a 119.2-mile mix of highway driving up to about 87 mph, using the climate control liberally in 90-degree weather, and covering a few miles of loose, sandy trail driving, the trip computer showed us as averaging 31.4 kwh per 100 km, or just 1.98 miles per kwh.

Although that’s well below the e-tron’s projected range, we feel confident that more “normal” use cases, on pavement, at lower cruising speeds, will result in range close to what Audi expects.

The 95-kwh battery pack has 36 cell modules—31 on a flat-plane “skateboard” plus five more in an “upstairs” that fits under the rear seat. Each one of those contains 12 lithium-ion pouch cells, supplied by LG Chem.

Using a proprietary cooling logic, the system can operate as up to four isolated cooling circuits when needed and has a separate mode, for extreme needs, that uses the air conditioning compressor for battery cooling. Climate control incorporates resistive heating, and heat-pump functionality that can transfer up to 3 kw of thermal energy from electrical components to help with cabin heating.

The e-tron will be the first vehicle for the U.S. market that can take full advantage of 150-kw CCS-format DC fast chargers, such as those that will soon be installed nationwide via Electrify America and other networks.

On 150-kw hardware the e-tron can go from zero to 80 percent in just 30 minutes, or to a full charge in about 45 minutes. Audi says that it will run close to 150 kw up to about 70 percent and then taper down.

Audi demonstrated charging with a 150-kw unit and we saw about 137 kw at 60 percent—throttled back by the hardware, not the vehicle, according to Audi officials because of the warm (90-degree) ambient temp.

Audi claims that it’s expecting e-tron owners to charge at home 95 percent of the time. But don’t plan to charge up the e-tron with a standard 120-volt home AC socket; that way will take 90 hours.

In the U.S., Audi will partner with Amazon Home Services (and its pre-screened electricians) to install a NEMA 14-50 (240-volt, 40-amp) socket to charge the e-tron at home in as little as 9 hours either with the included mobile charger or with a dedicated, wi-fi-equipped home charger (also for purchase via Amazon).

The e-tron is also the first Audi to support car-embedded Amazon Alexa functionality to listen to music, order items, or access other Amazon devices at home. The e-tron isn’t itself accessed as an Alexa-enabled device.

The dash of the e-tron employs the Audi virtual cockpit (a wide, high-resolution reconfigurable gauge cluster) plus the new “touch response” version of Audi’s MMI infotainment system. With two high-resolution touch displays—10.1-inch for the upper and 8.6-inch for the lower—it eliminates many physical buttons and moves climate-control functions entirely to the lower screen, which blips with a tactile confirmation as you make a selection.

We found the lower screen (when looking for recirculate mode in a dust cloud, for instance) to be too far down in the driver’s field of vision. Other menus have been simplified versus former versions of MMI and made more smartphone-like.

Our test car was equipped with the optical virtual (camera-based) exterior mirrors, a futuristic feature we really wanted to like but ultimately found frustrating. Although it’s unlikely to come to the U.S. soon, we found (surprising) near incompatibility with polarized sunglasses in the bright sun, difficult depth perception, and disappointing clarity at night.

Every bit a luxury vehicle

The interior is plush and welcoming, with a passenger-car feel to the controls but a utility-vehicle vantage point. Rear seats in the e-tron are adult-proportioned, with so much leg room and head room that sitting back won’t be a compromise.

The front trunk can store charging cables or, perhaps, a couple of small carry-on suitcases, while the rear cargo space is just like that of a gasoline SUV: 28.5 cubic feet with the rear seatback up and 57 cubic feet with it entirely folded forward.

The e-tron is due next spring, and availability remains something Audi has yet to prove. In September, a company official said that global pre-orders already exceeded 10,000. Audi’s U.S. plan remains build on advance orders, at least at first, without building dealer stock in a traditional way—although that may change once initial orders are filled.

As it stands, the e-tron looks like a very smart bet on the future—one that shows that going electric is no concession.

Audi provided travel and lodging to Internet Brands Automotive to bring you this firsthand report.