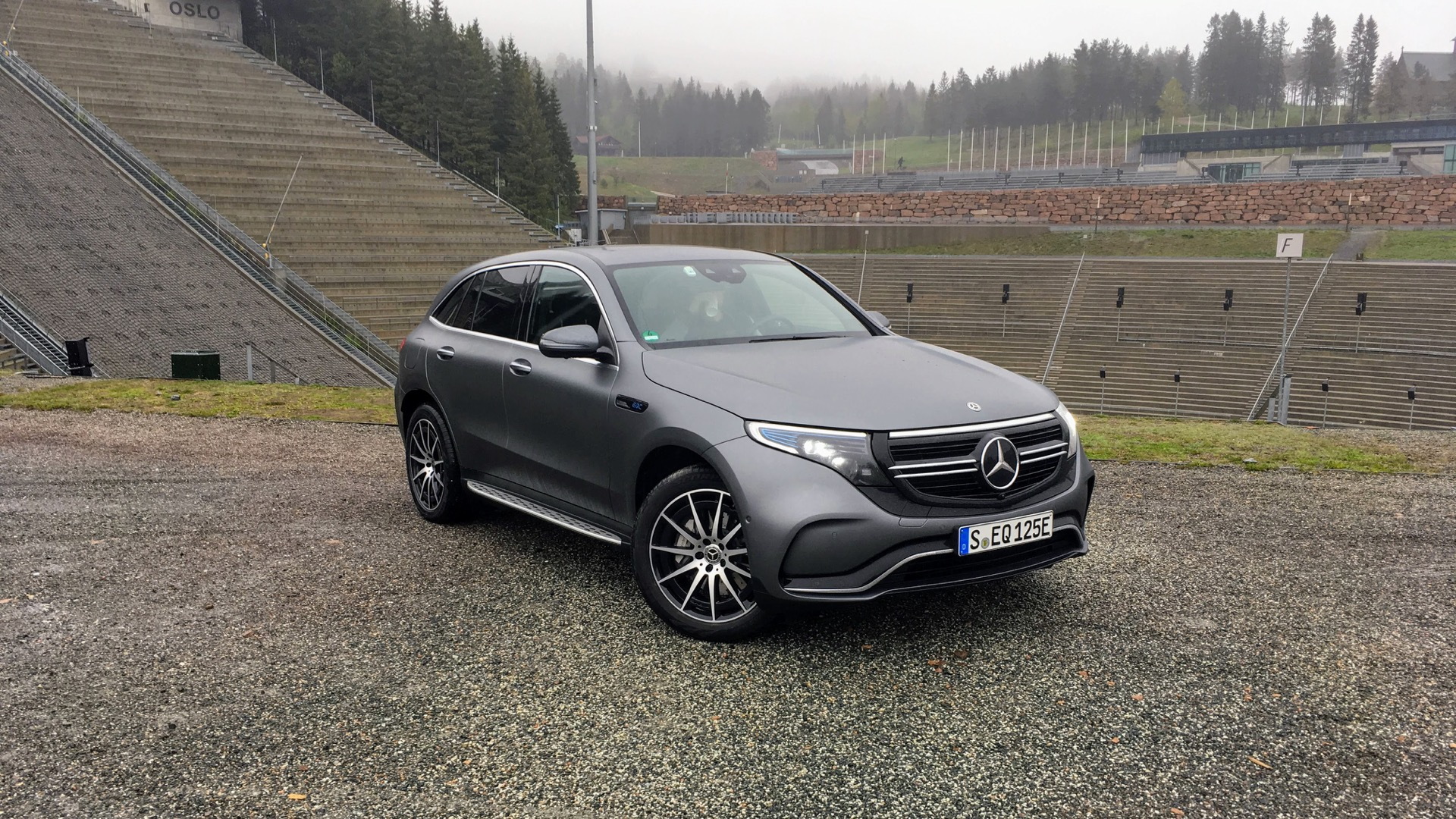 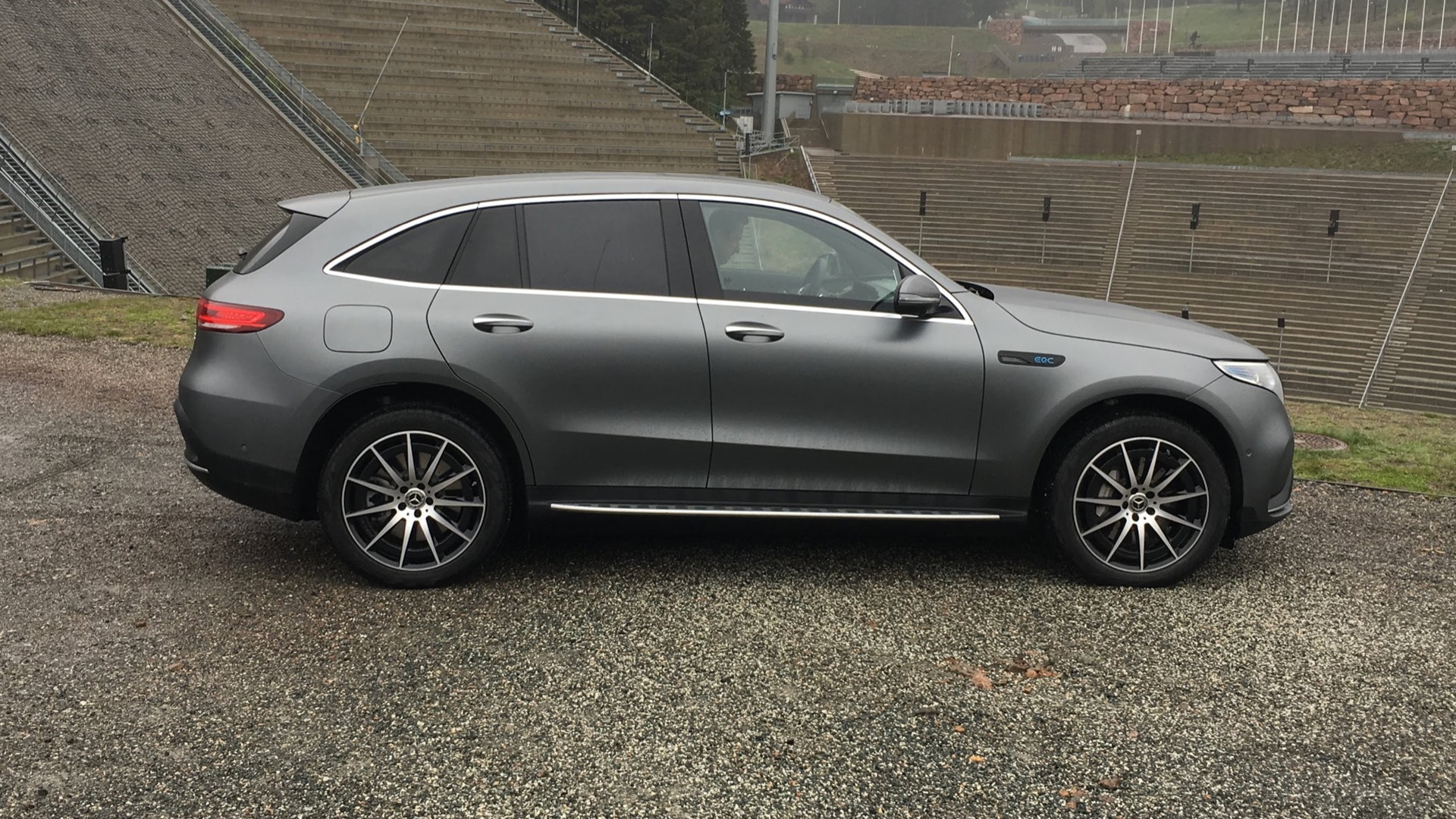 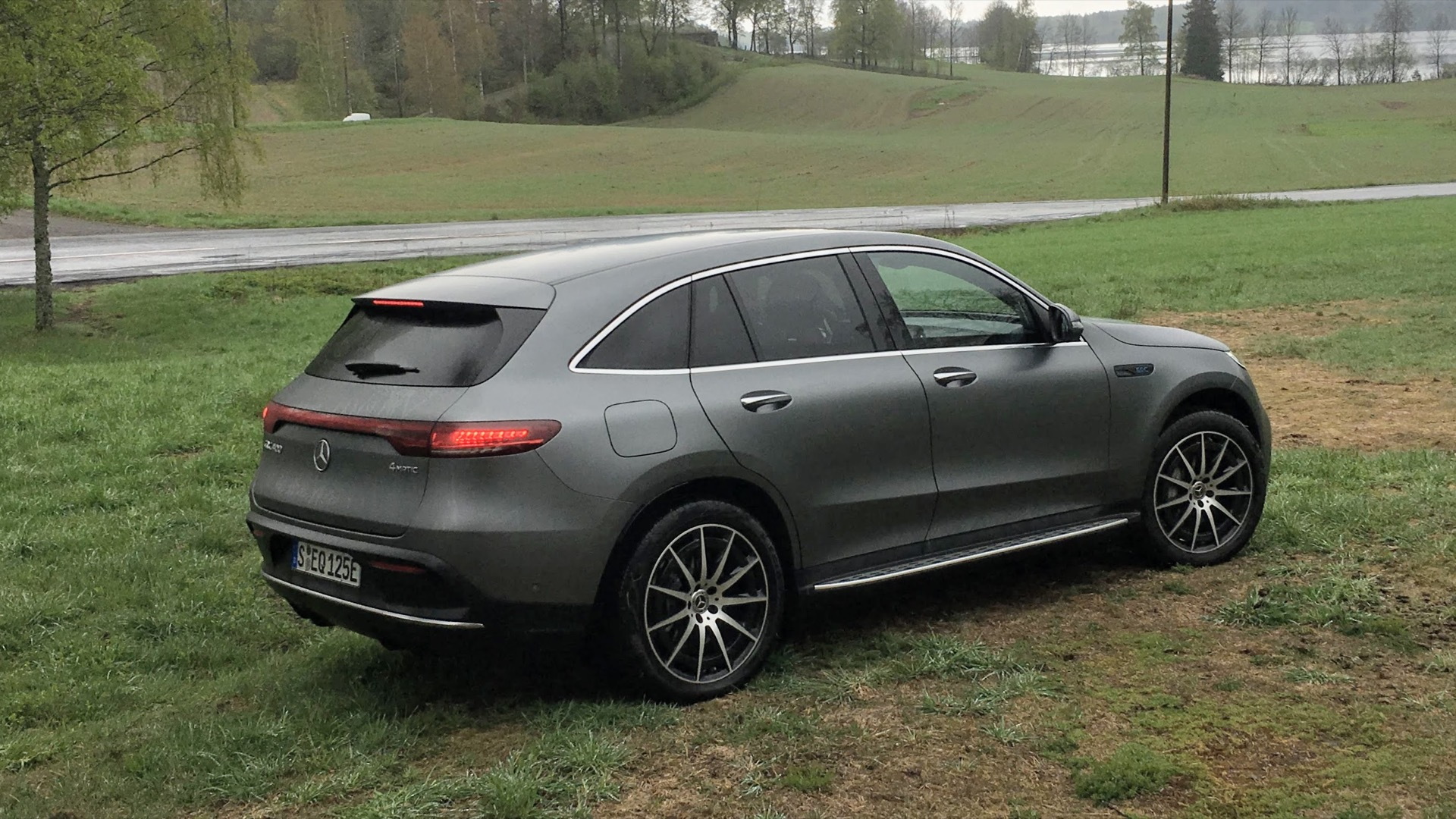 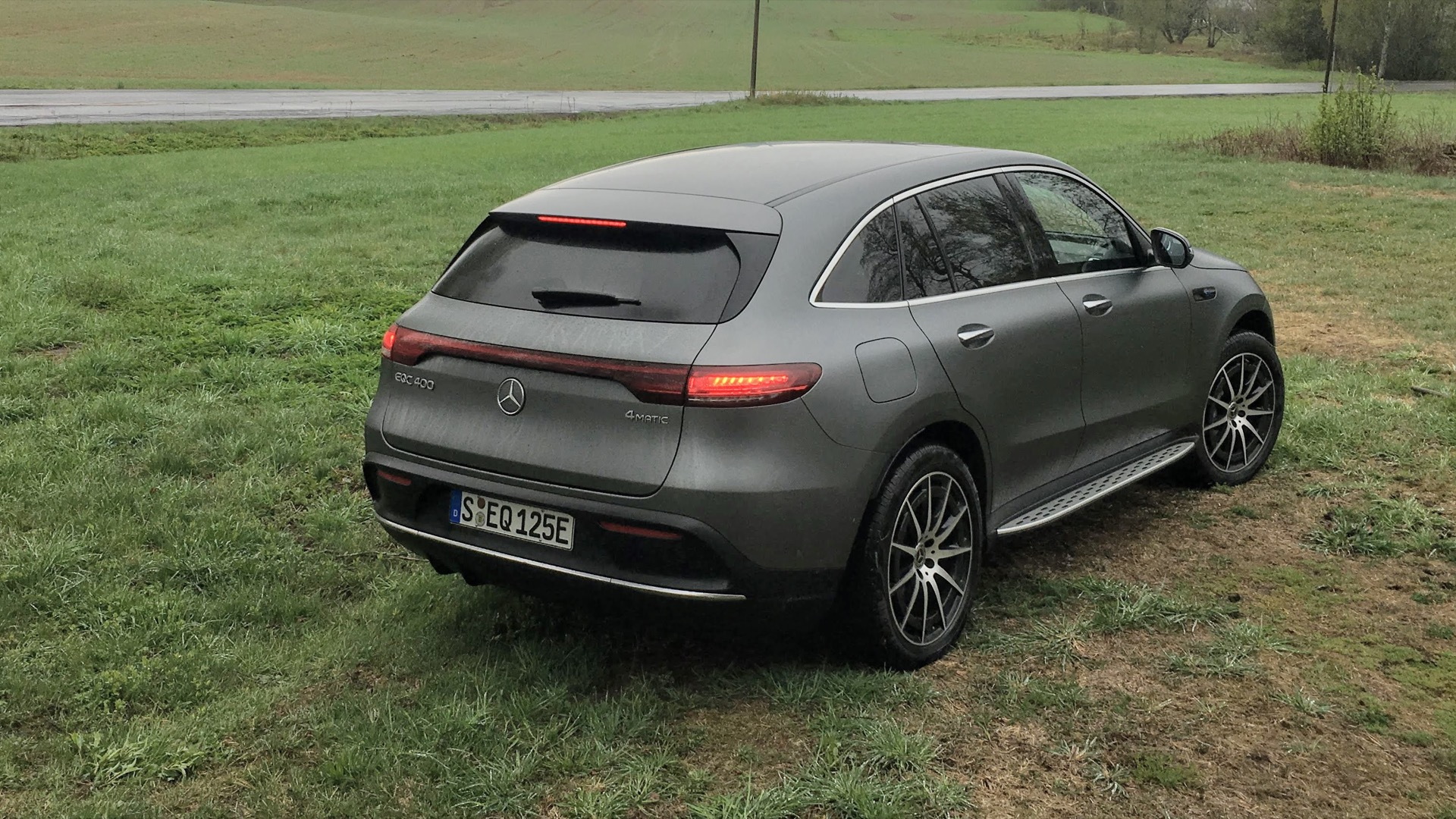 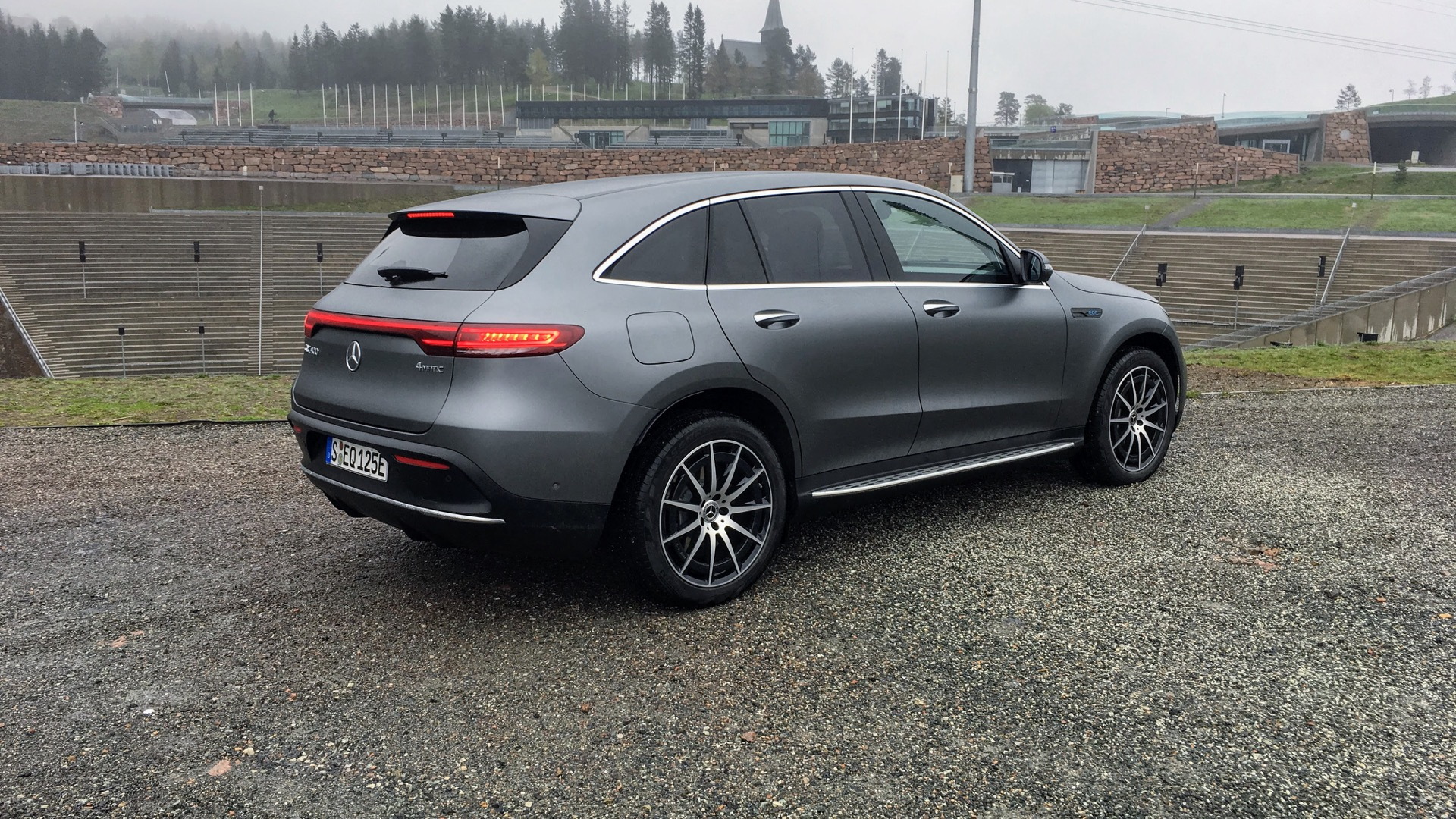 Norway has a lot of electric cars—so many that it can make anyone driving a new vehicle with an internal combustion engine look like a Luddite.

Mercedes-Benz brought us there to experience the EQC—and possibly to normalize it in a sea of EVs that makes California look like a land of late adopters. Outside Oslo, where cars were larger and more upscale than in other parts of Europe, and Tesla vehicles (S and X) are a more common sight than around Los Angeles or the Bay Area, the EQC fit right in.

After a couple of rain-soaked days driving the EQC there last week, we can say that it will be a great addition in the U.S. when it arrives sometime in 2020.

At about 187 inches long, the EQC400 4Matic crossover splices into the American mid-sizers. Mercedes-Benz says the EQC can accelerate to 60 mph in 4.8 seconds, and to a top speed of 112 mph. And with its 80-kwh battery, its driving range is expected to land at more than 200 miles when it's rated by the EPA.

We wanted especially to know how the EQC differentiates itself in the current cohort of luxury EVs, how it charges in Norway’s abundant charging infrastructure, and what kind of real-world range to expect.

To tackle the first point: If the Audi e-tron is the most versatile, spacious, tough, and drama-free of the new luxury electric SUVs; and the I-Pace is the most dynamically satisfying; then the EQC is the comfort play.

That sounds a lot like what Mercedes-Benz has always done well, doesn’t it?

Mercedes-Benz already is known for quiet and vault-like. But because road noise is more noticeable in electric cars without the engine sounds to distract your focus, there’s an additional suite of noise-abatement measures in the EQC. In short, the EQC has a 5-6 decibel reduction in certain bothersome frequency ranges and a 3 db overall reduction versus the GLC. (It’s also the quietest electric car this editor has ever driven in terms of road and rolling noise, and the whine of the motors has been almost completely masked.)

The EQC rides as if it were on a foam mat. Part of that credit goes to the stabilizing 1,434-pound battery pack, which is mounted low and contributes significantly to the roughly 5,400-pound curb weight (U.S. spec for the vehicle hasn’t yet been detailed). A relatively soft suspension, rear air springs, and grippy-yet-efficient Pirelli Scorpion Verde 235/50 R20 tires all helped soak up the irregularities of choppy Norwegian backroads.

The way the EQC handles never escapes the car's portly mass, but its steering is precise and decently weighted in the comfort setting (Sport brings artificial heaviness). It’s a vehicle that lacked jarring surprises, and well-tuned dynamic systems made it feel surefooted in the pouring rain—even with full-throttle takeoffs on uneven surfaces—and it handled quick lane changes well. There’s one exception to this buttoned-down ride: In rapid braking, sudden acceleration, and over speed bumps there’s more fore-aft body motion than in other crossovers this size.

Off-roading is strictly off-bounds for the EQC, but towing (for Europe) is about 4,000 pounds.

Not a conversion, but a family thing

There’s a reason the EQC keeps mostly to the proportions of Mercedes’ gasoline-powered GLC: the two vehicles are assembled together in Bremen, Germany. It carries over the GLC’s 113.1-inch wheelbase and overall width of about 74 inches, as well as some key underfloor and chassis pieces from the GLC. But all the bodywork and nearly everything from the lower sills upward is unique to the EQC, Mercedes says.

The differences peg the EQC as something more akin to a styling refresh of the GLC, with a thin strip of rear lighting and different black-accented front grille the most noteworthy points. Inside, the EQC has different styling versus Mercedes’ other current SUVs with a more horizontal look, and the gauge cluster and infotainment screen all on the same plane and part of the same bezeled piece.

The EQC is powered by two asynchronous (wound) motors, together making 402 horsepower and 561 pound-feet of torque, and you hear the reduction gears more than the motors themselves. The one in front has a design variation for better efficiency, while the rear motor is designed for power and is the same rear motor as the Mercedes-Benz F-Cell fuel-cell vehicle, which is also based on the GLC.

Like the GLC, the EQC offers superb seats and a driving position that scoots you up and closer to the windshield for a great forward view. Back seat space is good enough for a 6-footer to sit behind another, and cargo space is ample even with the 40/20/40-split seatbacks up. But for overall passenger space, the EQC would feel tight with four adults aboard.

What happens when you lift off the accelerator is essential to the personality of electric cars, and here Mercedes has opted to offer four regenerative-braking modes. The EQC defaults to D, which scrubs off speed slightly faster than a coasting gasoline vehicle. Click the right steering-wheel paddle and you see D+, which cuts powertrain drag out completely, like Neutral. Click the left steering-wheel paddle once from D and you end up in D-, or twice to get D--, the most aggressive mode.

For most driving (or if you have a passenger on board), the D- drive mode seemed the most attractive; it minimized the unnecessary dabbing back-and-forth to the brake pedal but made it easy enough to stay smooth for passengers.

Even in D-- there is idle creep (meant to simulate the torque-converter behavior of a gasoline vehicle), which settled to nearly 4 mph in our test car when we coasted down or lifted off the brake. There’s no way to disable it, although once you stop with the brake pedal, a firmer press of the pedal holds the vehicle until you press the accelerator again.

Through the Dynamic Select toggle on the left side of the center console, you can choose Eco, Comfort (the default on startup), Sport, and Maximum Range. The Max Range and Eco modes have a detent in the accelerator maybe a third of the way through its travel, advising you how to best accelerate for efficiency. Push past that and a ring of green lights surrounding the left side of the cluster disappears momentarily. Maximum Range also has a more aggressive weighting of the accelerator pedal, which actually pushes back harder as you press deeper.

Skipping the games, landing on comfort

Outside of that, the EQC intentionally avoids gamifying driving or scolding you for your driving style—comfort is the priority. Regardless of driving mode, the climate control system doesn’t compromise comfort until you actually hit zero on the range meter.

Under the surface, the EQC makes use of the whole toolkit of thermal and preconditioning systems for the battery, which has 384 cells split over four larger modules under the floor (72 cells each) and two smaller ones under and just behind the back seat (48 cells each). One cooling circuit covers the power electronics (for the front and rear combined) while the other circuit is solely for the battery pack and has a heat pump that can scavenge heat to warm the battery in cold weather in all trims. The cooling systems are maintenance-free and sealed for the life of the vehicle.

According to Mercedes-Benz, the EQC charges on 240V AC with its 7.4-kw onboard charger in about 11.5 hours and on CCS DC fast-charging equipment from 10 to 80 percent in 40 minutes—if it’s on a charger that permits its peak 110-kw rate. German company officials said that “it is possible” to charge the EQC on 120V U.S. AC, but it will of course be much, much longer and they didn’t have a time.

We discovered that finding that peak charge rate can be tricky—even if you’ve found a 150-kw charger. In the interest of battery preservation, Mercedes-Benz requires battery preconditioning before tapping into the full rate. The easiest way to make sure you have a battery ready to charge at full speed is if you program the charger as a waypoint with the onboard navigation system or via the Mercedes Me smartphone application that syncs with the onboard system. The vehicle then uses some extra power from the battery to warm the entire pack—a process that we were told afterward can take 20 minutes or more.

The navigation system also has live traffic updates and dynamic rerouting, plus the weather, the topography and traffic flow, and the type and location of charging stations along the way. It may, for instance, suggest a 50-kw charger to get from 20 to 40 percent, and then a short distance later use a 150-kw station to go from 30 to 80 percent. An app runs in the background and syncs with the navigation to provide charger location and availability from multiple networks. It will arrive in the U.S. with a centralized payment system.

Like other models with the new MBUX infotainment interface, the EQC has a voice-recognition system allowing drivers to tap into EV-specific functions like “Where is the nearest charging station?” or “Charge the vehicle to 85 percent.” No button-press is required for those natural-language queries—just prefacing it with "Hey Mercedes?"

When my co-driver and I would occasionally mention “Mercedes” as part of the conversation, the system kept cutting in—although that’s probably an issue mainly limited to vehicle reviewers.

Our drive was chopped into smaller portions in two different vehicles so we weren’t able to get a sense of where the range will land in real-world driving. But for the driving stint in which we drove the closest to what we might consider gentle touring or commuting, we covered 126 kilometers and averaged 25.3 kilowatt-hours per 100 kilometers—which figures out to 196 miles of total range.

In Europe, the EQC will cost at least $67,000, and early versions cost about $80,000. In the U.S. and Norway alike, the EQC is expected to land between the Tesla Model Y and Model X in both size and price. And on both sides of the pond, the luxury, pedigree, and support of the three-pointed star will probably introduce a whole new wave of luxury households to electric motoring.

Internet Brands Automotive accepted some travel and accommodation expenses in order to facilitate this report.