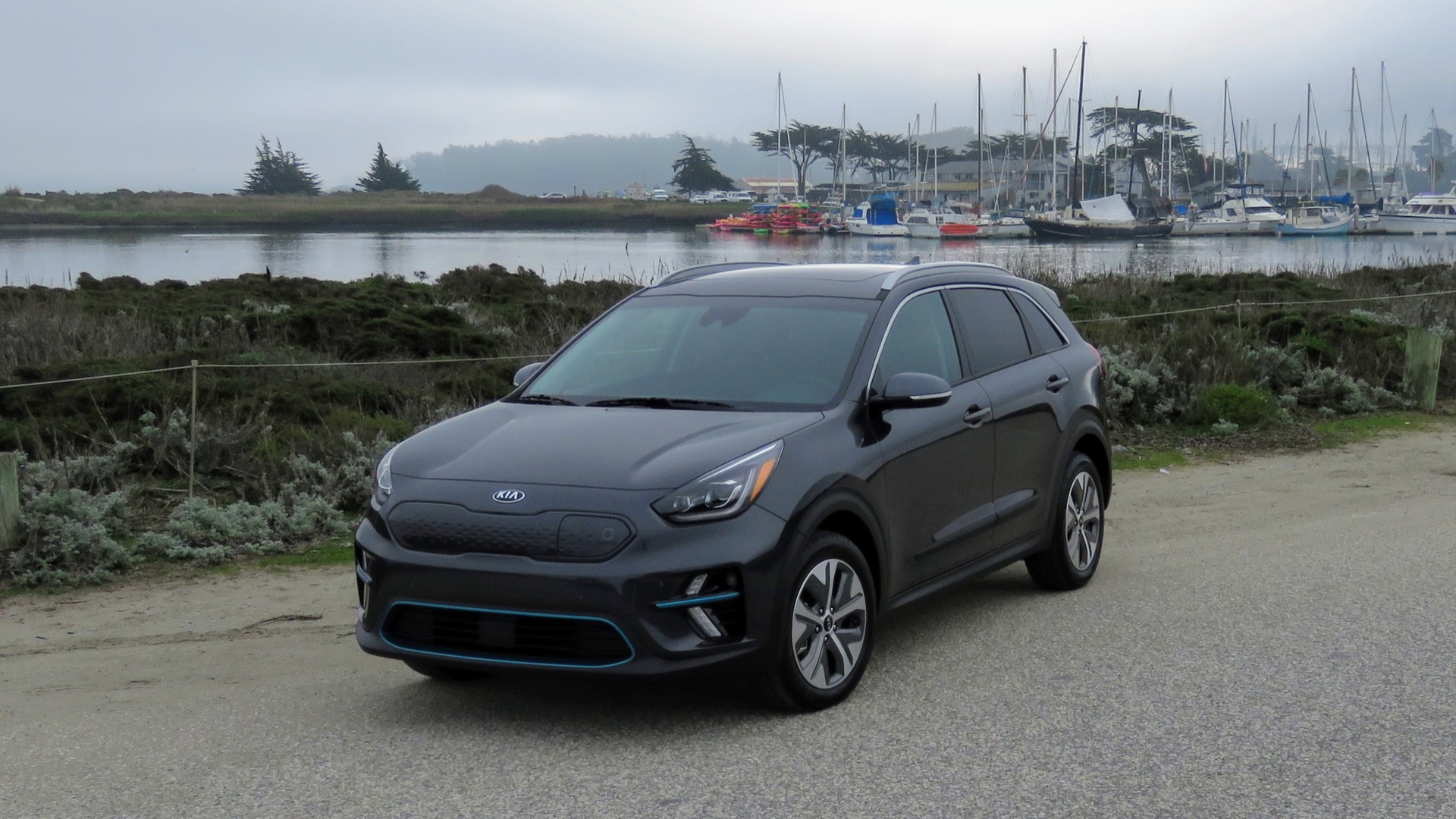 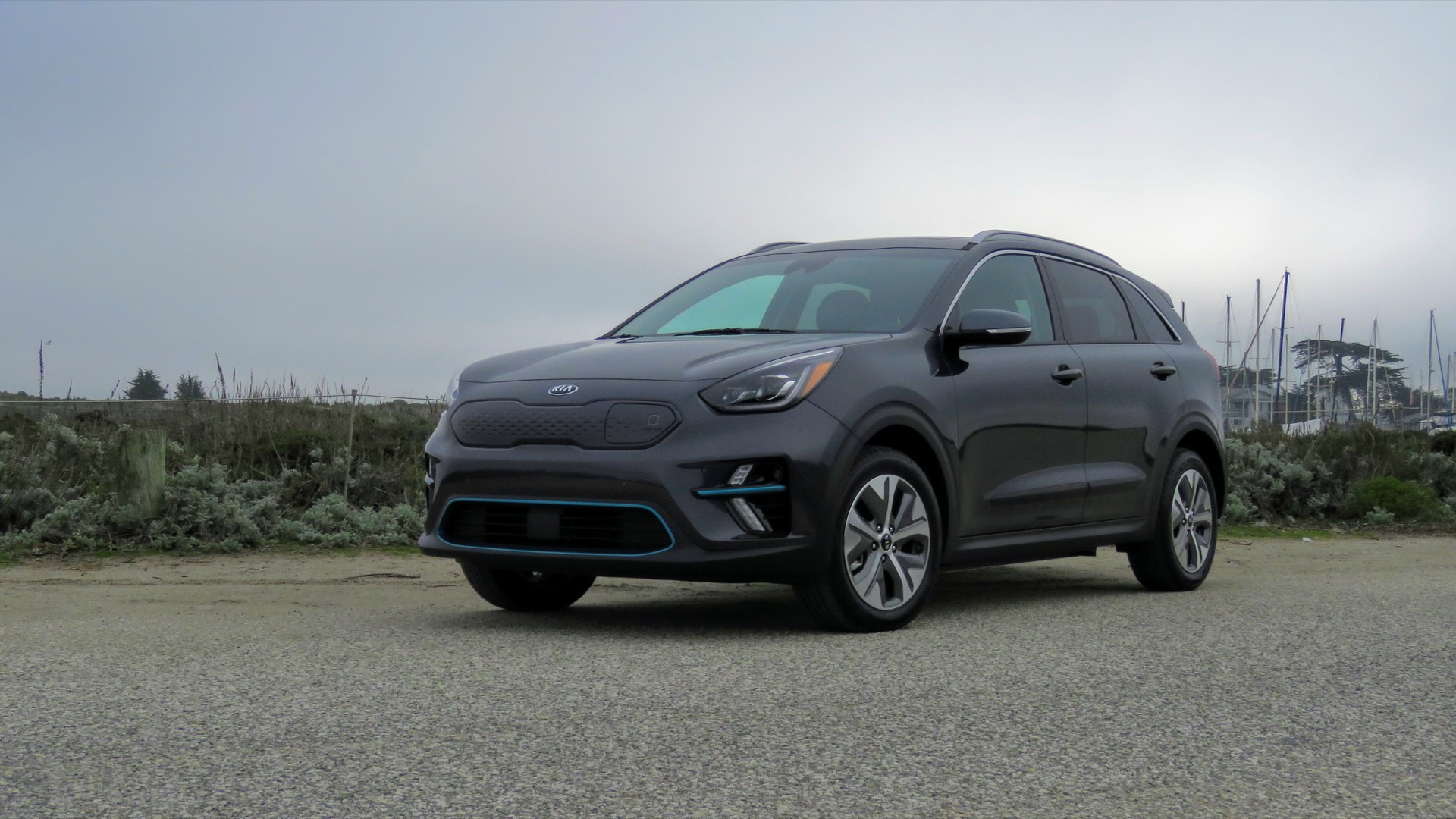 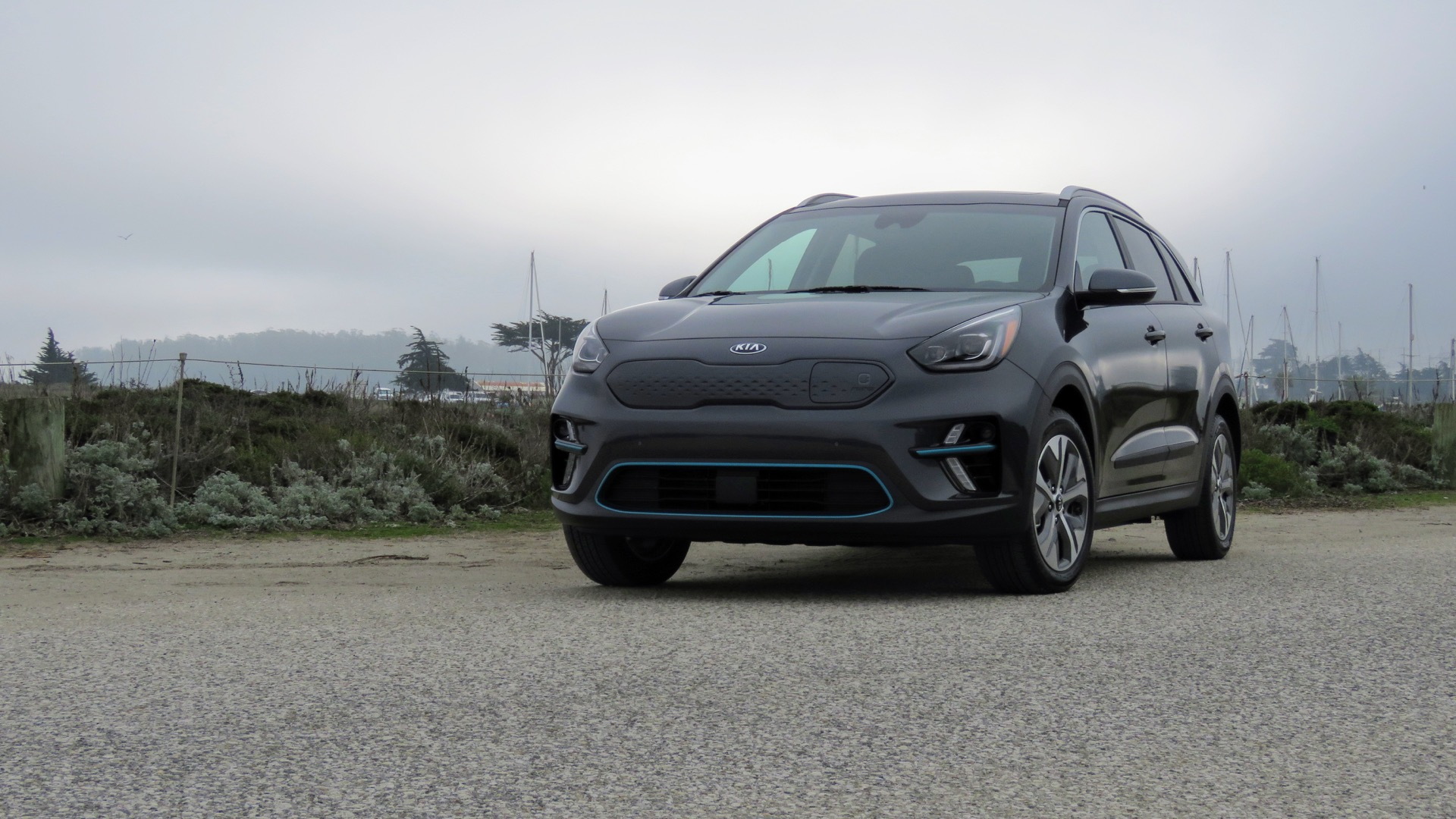 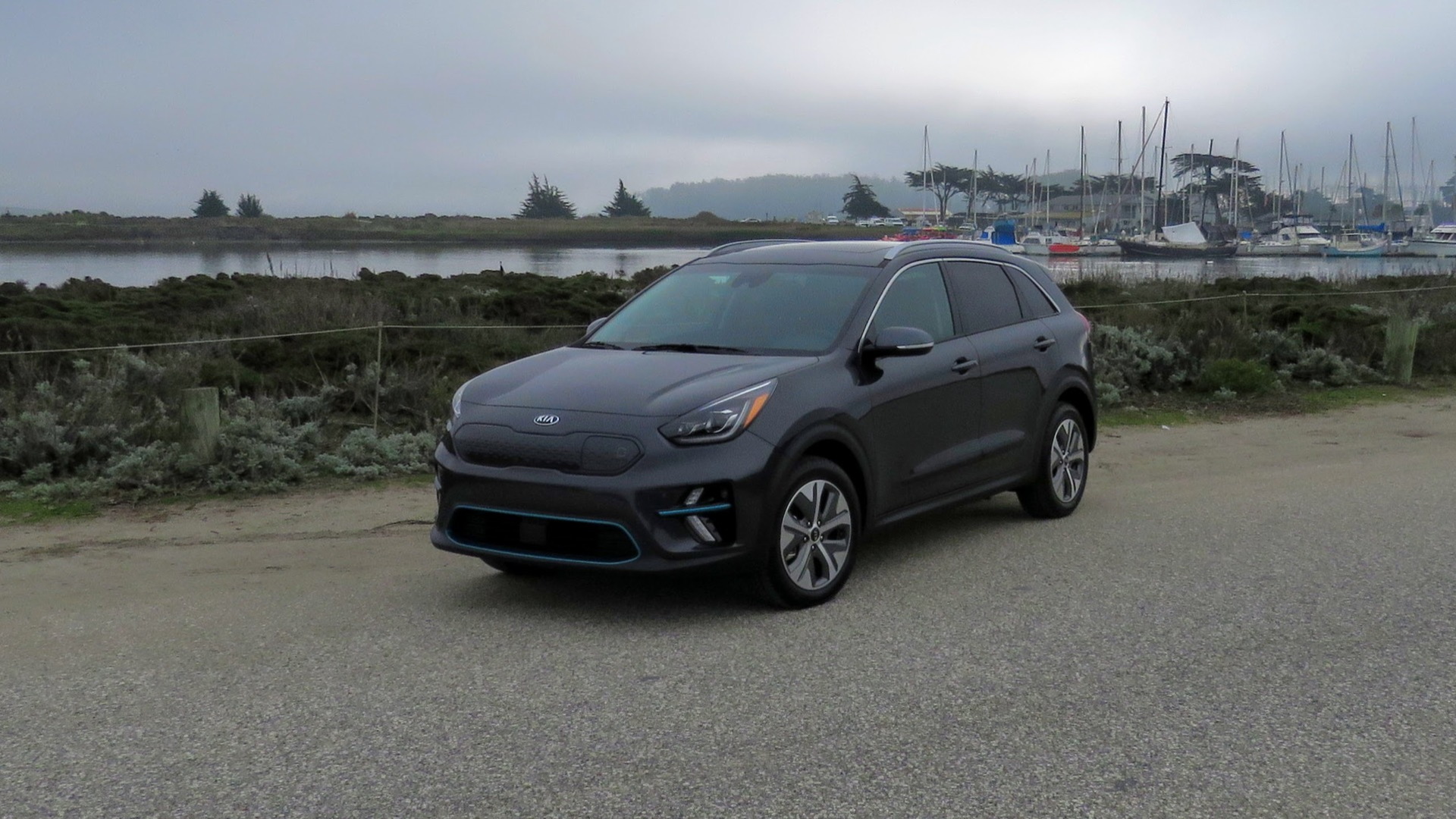 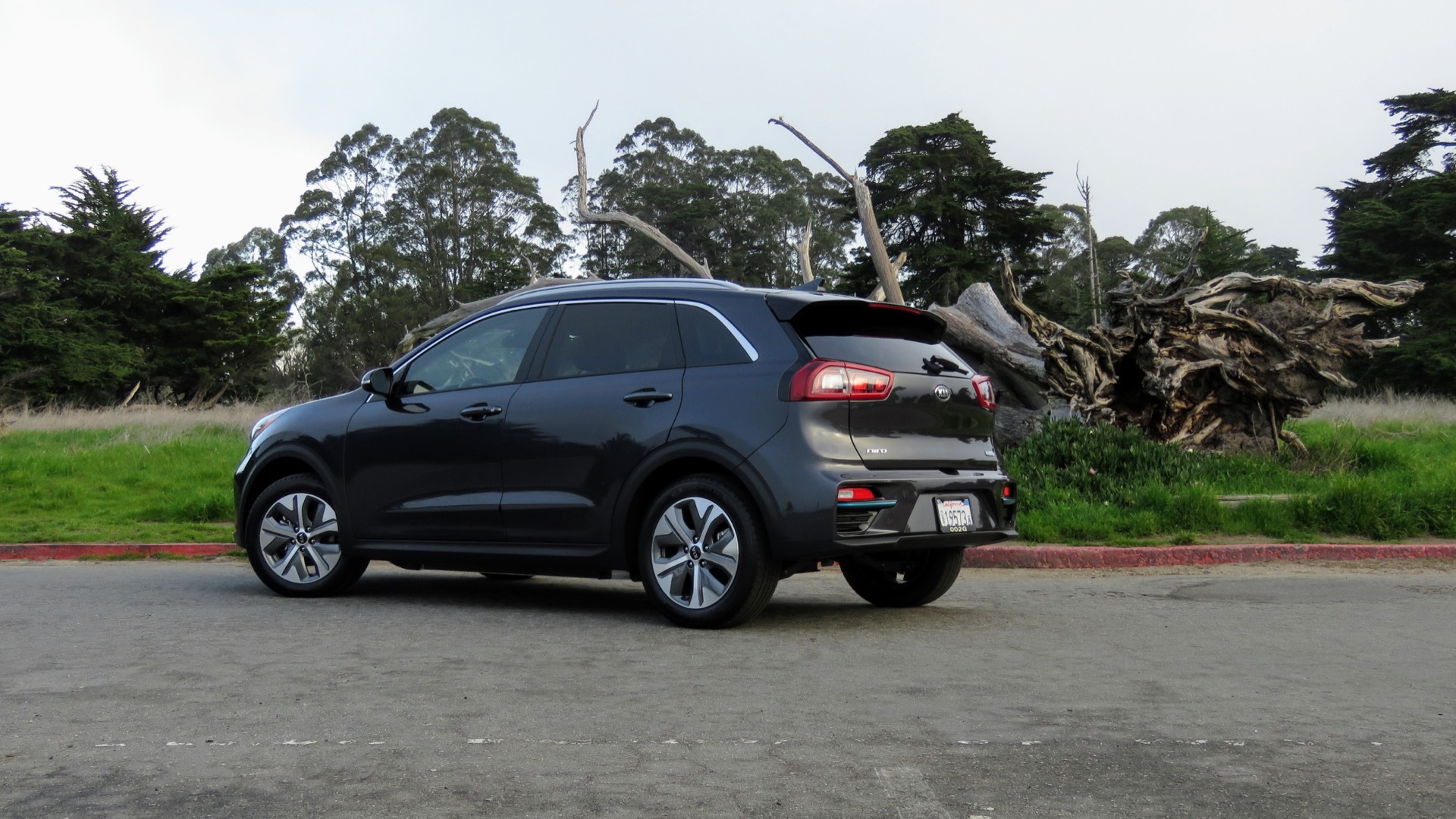 Just before reaching a tight series of esses on the Monterey Peninsula’s famous 17 Mile Drive, I clicked the left steering-wheel paddle to bump the Niro EV up a regeneration level—a motion that mimics downshifting in a gasoline vehicle—then clicked the right paddle to ease things for my passenger as we breezed slowly by a quiet, off-season Pebble Beach.

Minutes later, rolling into Monterey and its Cannery Row, I held the left paddle when approaching each stop, which triggers maximum regeneration—enough on a gentle approach to get the Niro EV all the way to a stop, followed by a brake hold. No need to touch the brake pedal.

To clear up some confusion, although this interface felt very close to that of the Hyundai Kona Electric, they aren’t entirely related. The Niro lineup shares its platform with the Ioniq, and Hyundai says that it was designed from the start for hybrid, plug-in hybrid, and battery electric versions.

The Kona Electric, on the other hand, is built using Hyundai’s global small-car platform—and some of the same underpinnings of the upcoming Kia Soul. There’s a Kia Soul EV on the way, just a couple of months behind the Niro EV, which will start arriving in March.

A key difference, down to the cell level

The Niro EV nevertheless shares much with other electric vehicles from its Hyundai parent company. However, while the Hyundai Kona Electric (and Ioniq Electric) use LG Chem battery cells, the Kias use cells from Korean competitor SK Innovation.

For this big 64-kwh pack, pouch cells are laid, with gaps between them, into five large modules—three longitudinally below the passenger floor, and two oriented transversely and stacked double below the rear seat. Together the whole battery pack is sealed and liquid-cooled, in a system that also cools the motor and power electronics.

The Niro rides on a 106.3-inch wheelbase and has an overall length of 172.2 inches. Versus the Kona Electric (102.4 inches and 164.6 inches, respectively), the Niro EV is a longer vehicle and the cabin feels larger. The Niro EV also weighs a couple hundred pounds more, at most, than the Kona Electric, and with its battery-pack weight at 1,008 pounds, it tips the scales at about 400 pounds more than a loaded Niro PHEV, and about 750 pounds more than the Niro hybrid.

Fitting the big battery under the floor has taken some clever work with packaging. To maintain the same ground clearance as other Niro models, and (almost) the same interior packaging, Kia raised the Niro EV's suspension height by 0.6 inches.

Fast enough, fluid in the corners

That required completely retuning the suspension. To those, like this editor, who have spent a fair amount of time in the other Niro models, the net effect is a vehicle that feels sharper and more precise at lower city speeds and yet seems to include a little more body motion on the highway and during more abrupt maneuvers. It’s by no means a performance-tuned car, and it doesn’t feel as at ease on curvy roads as the Kona Electric, but it feels quick and fluid.

To get the rear seats to fold flat as they do in other models, and to keep the seating point about the same, engineers have also made the rear seat cushion slightly thinner. The Niro EV comes with a 120V power takeoff (for low-current use), down where the spare tire would be, that’s engaged by checking a “utility mode” box on the instrument cluster menu.

Throughout my time in the Niro EV, I found its driver’s seat felt too high for my 6-foot-6 frame (it wouldn’t motor down enough to feel at one with its cabin). Otherwise the seats are quite comfortable. At less than 72 inches wide, overall, the Niro EV is a rather narrow vehicle. Fitting a third adult, or even a third child, in the middle rear seat, is going to be snug.

The shifter is an unnecessarily different dial that you twist to shift back and forth between Reverse, Neutral, and Drive, with a button in the middle to press for Park. Cupholders, just behind, are deep down at the bottom of the console, and the whole center console feels like it could use its space better.

The permanent magnet electric motor, at 201 horsepower and 291 pound-feet of torque, driving the front wheels, makes the Niro EV feel punchy at low speeds and more eager on the highway than most electric vehicles. Kia points to an official 0-62 mph time of 7.8 seconds.

Regen and modes: You have choices!

Brake regeneration, as we started to explain above in this piece, comes in three steps (1, 2, or 3); there’s also a coast mode (0).

Otherwise, lifting a foot off the brake pedal allows the Niro to creep forward slowly. The brake pedal feels spongy and unsatisfying, although gentle stops are nicely blended between regen and the friction pads.

Through four different drive modes—Normal, Sport, Eco, and Eco+—the press of a button can instantly change the level of regenerative braking, air conditioning and heating settings, and speed limits. All this can be preset via menus in the center infotainment screen.

The “Auto” regen mode that was engaged when I first hopped into the Niro (and later tried again) is a little less straightforward and predictable. After getting a series of inconsistent responses when I lifted off the accelerator, I found out it’s a system grounded in traffic, not topography. I had expected it to respond to steep hills but found out later it responds only to camera and radar inputs from the adaptive cruise control, basing regen on following distance.

Electric vehicle powertrains actually make distinct sounds, and while many automakers have put forth a great effort to mask them, the distinct whines of the motor and reduction gear are more noticeable in the Niro EV than in other EVs—including those companion Hyundais. Road noise is squarely midpack among EVs; it definitely becomes more noticeable starting at around 65 mph. The boxy body defies expectations for wind noise, with a coefficient of drag of 0.30 (versus 0.29 for the standard Niro). That’s more than the 0.24 of its Ioniq cousin, but it’s better than most other small crossovers.

Recharges in an hour… or 59 hours

Using the 7.2-kw onboard charger at Level 2 (240V), via a home or commercial charger, requires about 9.5 hours to get a full charge. And if you need to plug the Niro EV into a home 120V AC socket, it’ll recharge, eventually—in about 59 hours.

The DC fast charging is a little more nuanced. The Niro EV is Kia’s first electric vehicle that fast charges on the CCS (Combo) DC fast-charging standard, rather than CHAdeMO. While the rate for the Hyundai Kona Electric tops out at just above 70 kilowatts, the Niro EV can charge at up to 100 kw (a strength of the SK Innovation cells, apparently). It can only hit 100 kw for a short time, but it allows the Niro EV to recover 100 miles of range in 30 minutes or get from 0 to 80 percent in about an hour. That’s only 15 minutes less than on a 50-kw charger, so the time at higher power is limited.

Fast-charge times from Kia and Hyundai continue to be confusing. I tried to test this but couldn’t find any 100-kw or 150-kw hardware up and running during our drive, along the drive route around Santa Cruz and the Monterey Bay. Look for a follow-up.

Efficiency, according to the onboard computer, was excellent, averaging 3.8 miles per kwh after nearly 138 miles. That included two brief blasts up to 90 mph as well as about 60 miles of freeway driving, with the remainder on lower-speed roads. My test car’s state of charge at the end of that was around the 50-percent mark.

In all fairness, the drive was in mild temperatures of 55 to 64 degrees—approaching the sweet spot for today’s lithium-ion cells. We’re eager to see what the Niro returns in colder climates, using the heater, defroster, and warmers.

Cars sold in California won’t come with a heat pump. But those nearly everywhere else in the U.S. will come with a winter package that includes a heated steering wheel, a heat pump system, and battery warming.

Kia hasn’t revealed pricing for the 2019 Niro EV and won’t for at least a few weeks. It has, however, detailed features. The Niro EV EX will include a 7.0-inch touchscreen with Apple CarPlay and Android Auto compatibility. Adaptive cruise control, active lane assist, and forward collision warnings with automatic emergency braking are included. Niro EV EX Premium models add a heated steering wheel, upgraded audio, and a larger 8.0-inch touchscreen, plus a shelf just beneath the screen area with wireless phone charging.

The 2019 Kia Niro EV is probably too good for its mission. It amounts to a slap in the face, given all this, that Kia only plans to offer the Niro EV in very limited numbers and only in 12 states: California, where we had our first drive last week, plus Connecticut, Georgia, Hawaii, Maryland, Massachusetts, New Jersey, New York, Oregon, Rhode Island, Texas, and Washington.

Kia has produced an overwhelmingly competent electric vehicle that meets most range needs, is comfortable and practical, and even a little bit of fun to drive. Now the question is: Will Kia really sell as many as it can?

Internet Brands Automotive accepted lodging and some travel expenses in order to gain early vehicle access and bring you this firsthand drive report.