Over the next 2-1/2 years, Electrify America plans to expand its network of DC fast chargers for electric cars to include more cities, as well as to finish more of its build-out along highways across the U.S.

Electrify America is a division of VW founded to use money from Volkswagen's diesel emissions settlement to build out a network of fast chargers to make it easier for consumers to own and get where they want to go in an electric car.

Under terms of the court-decreed settlement, Electrify America is required to spend $2 billion by 2026 to build a network of fast-chargers that will charge any type of electric car—not just Volkswagens or Teslas—including in areas where other commercial networks might struggle to profit on installing chargers. That is scheduled to include at least two coast-to-coast highway routes with charging stations no more than 80 miles apart to make it possible to drive cross-country in any type of modern electric car.

EA's investments are scheduled in four cycles, the first of which is due to be completed by June 30, and the second cycle to start July 1.

Much of the first cycle was spent planning and hiring to get the necessary resources in place to build the network. Last summer, EA sketched out its overall network plan, which includes charging stations along highways that include 150-kilowatt and 350-kw chargers at those 80-mile intervals; 50- and 150-kw Metro stations, which are designed to help give urban apartment and condominium dwellers access to electric cars and serve those coming in the city; and Metro Hub stations along major commuting routes in and out of cities and in major suburbs. Many of these are at shopping malls or near subway or commuter-rail stations. 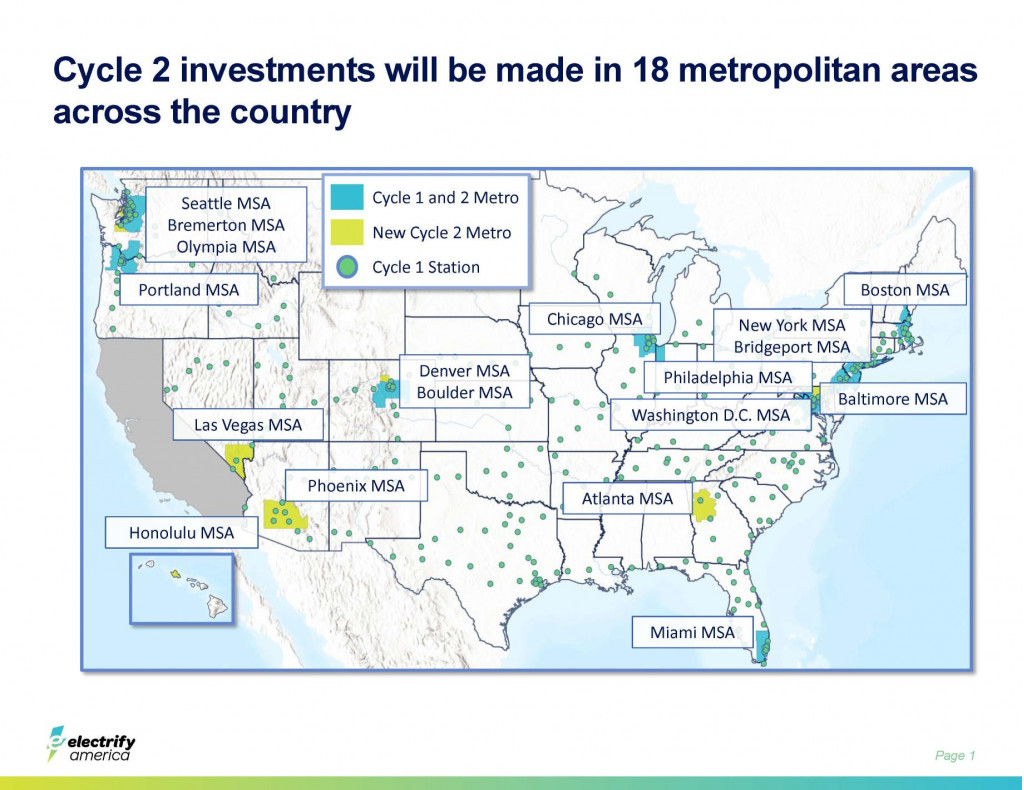 The first cycle dealt mainly with installing the highway and metro hub stations. The second cycle, which EA just announced on Thursday, continues those efforts but puts more focus on building inner-city metro stations near existing apartment and condominium neighborhoods, to give residents there a way to charge if they want to buy electric cars.

The effort mirrors one that EA proposed for its Cycle 2 buildout in California, which also focused on installing home and public chargers in low-income areas.

The second cycle will also include two pilot sites for charging autonomous vehicle fleets and will include renewable electricity generation at some stations to help reduce carbon emissions and reduce the cost of charging.