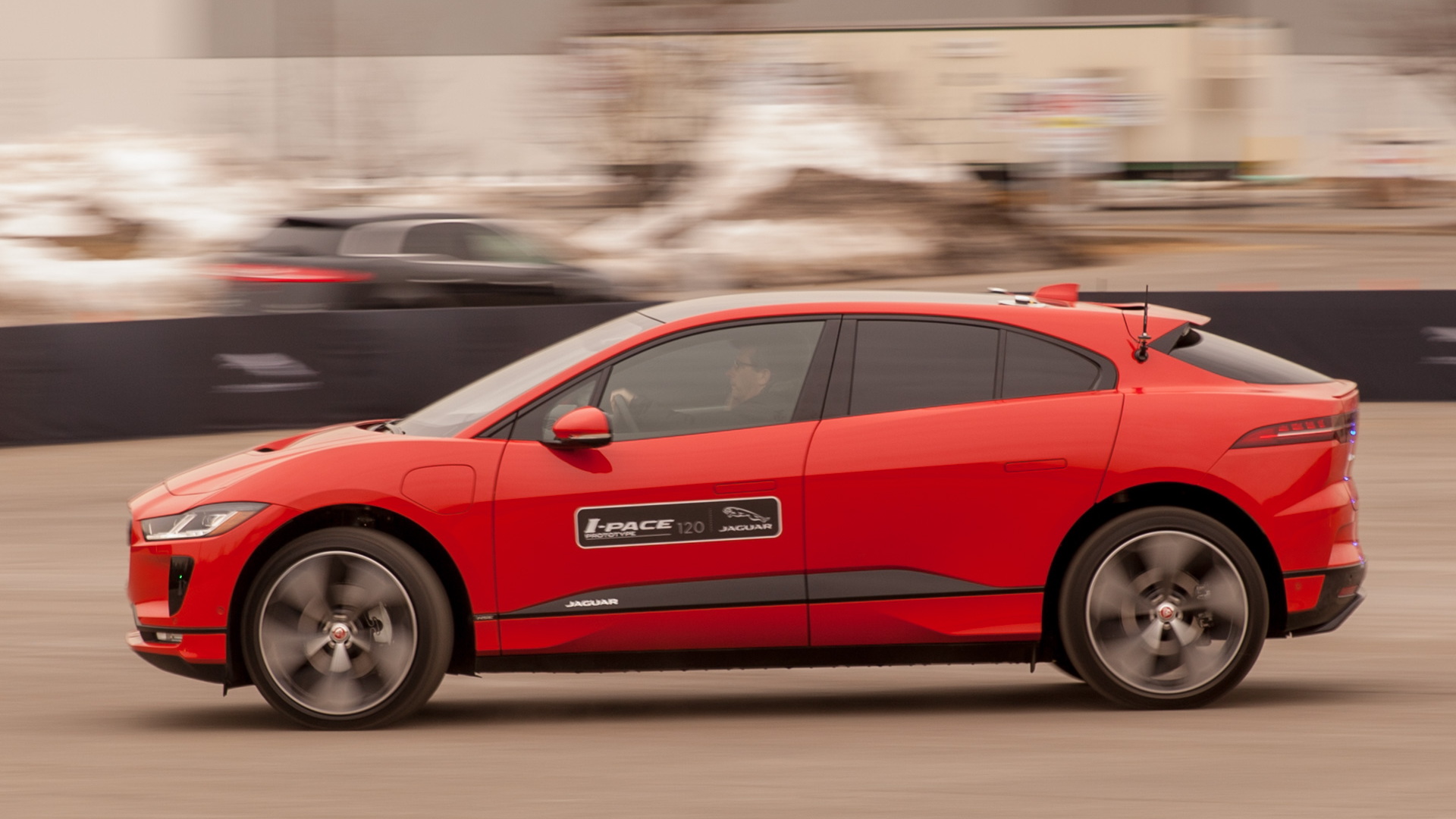 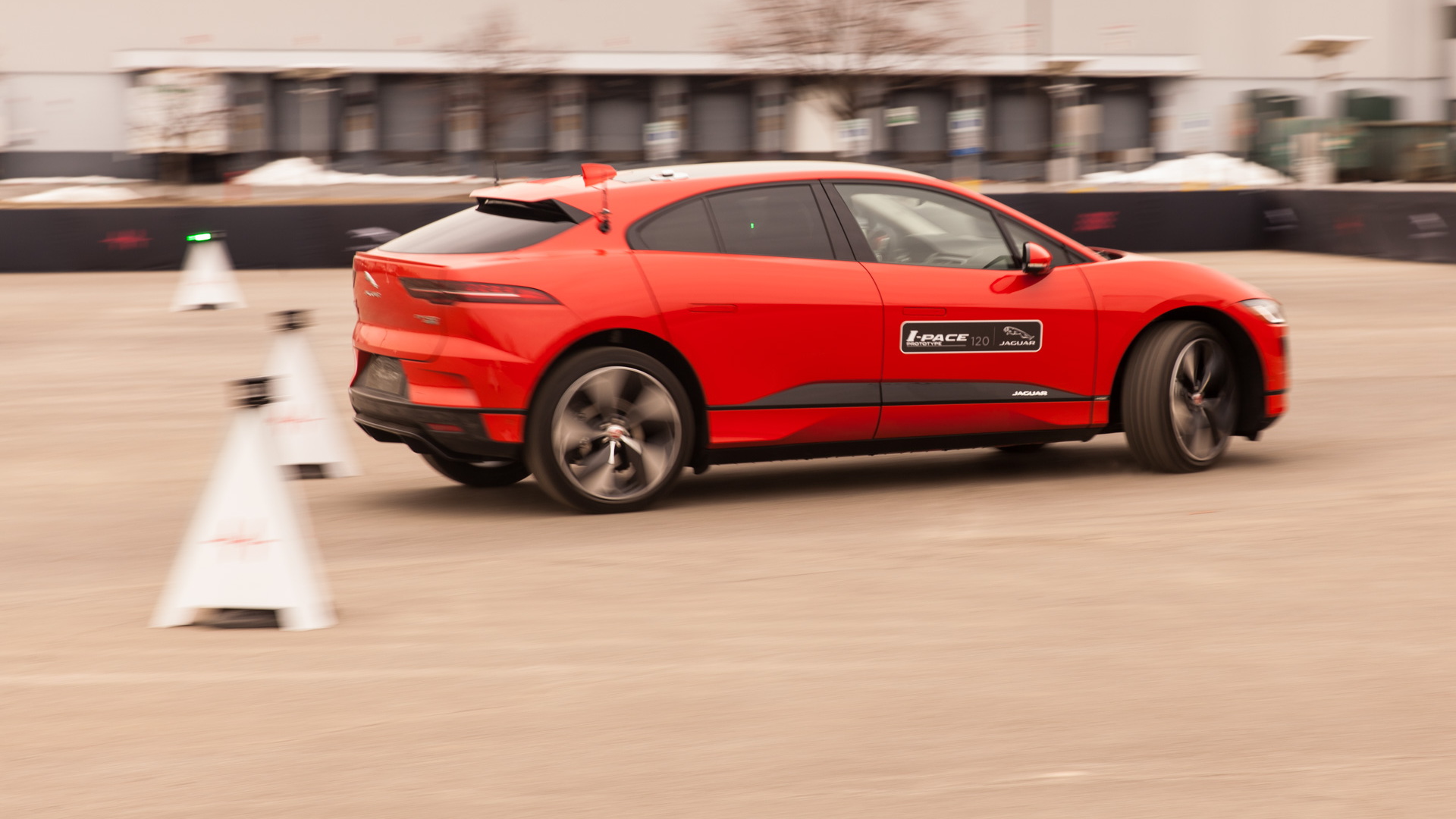 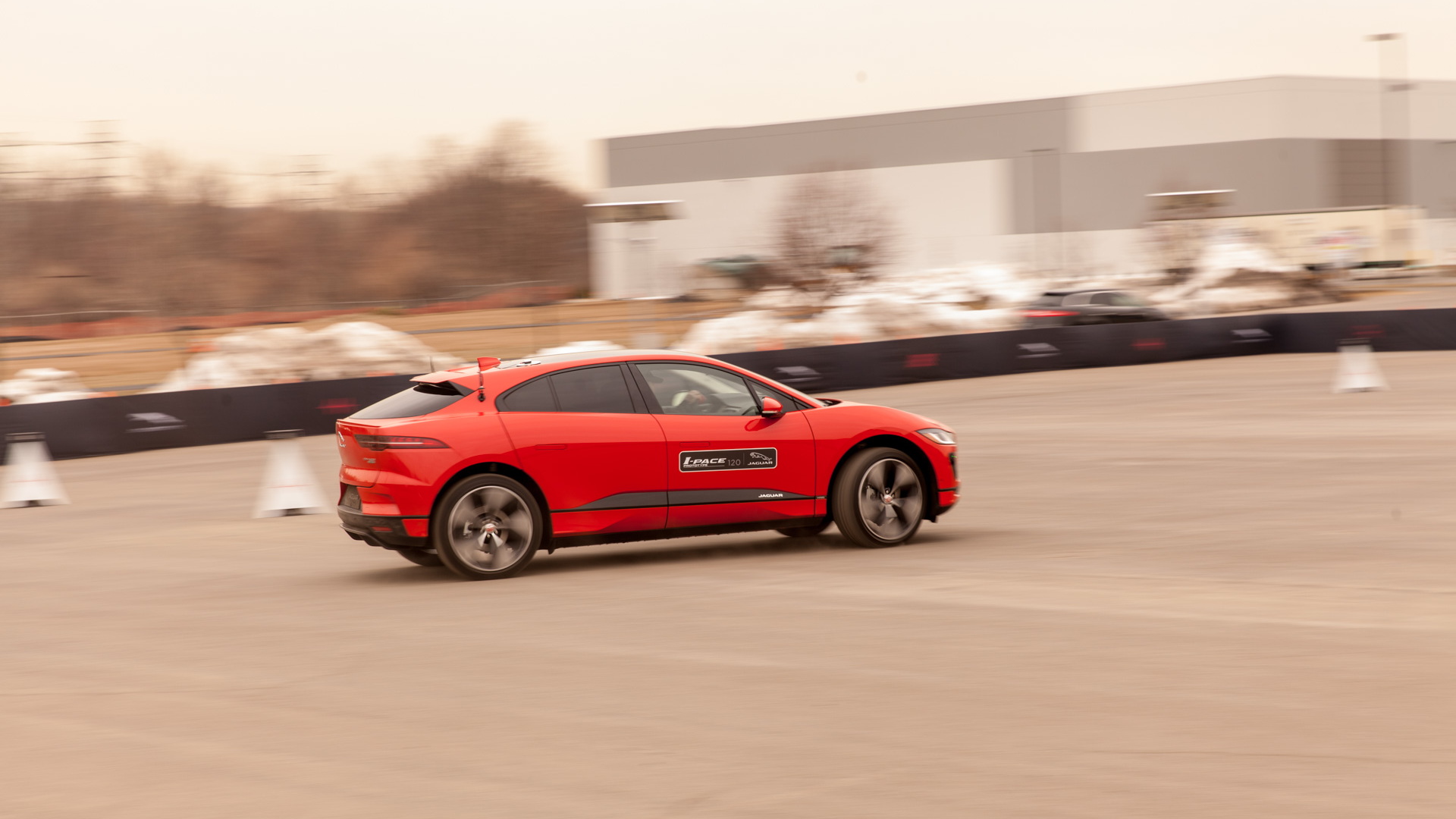 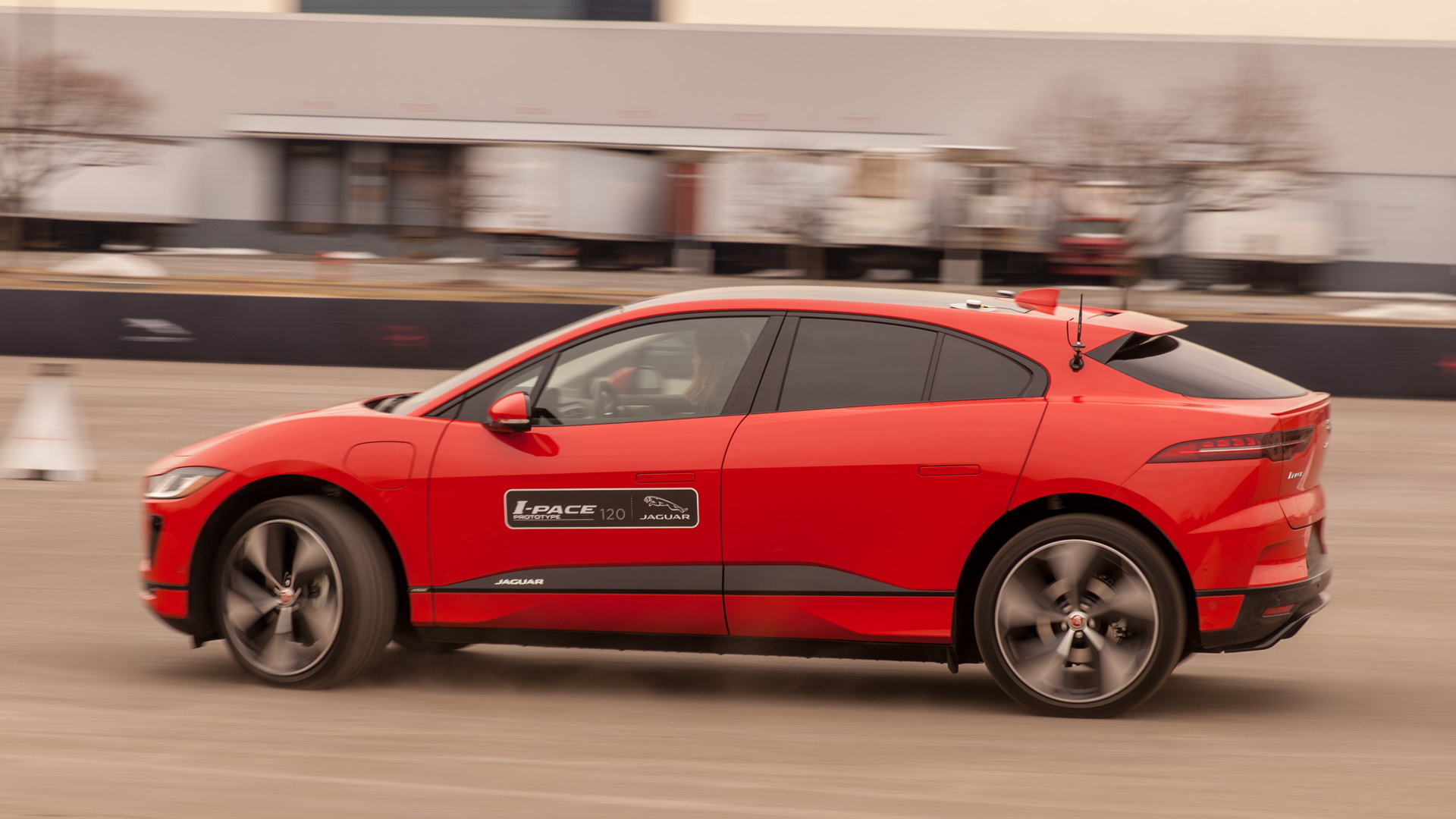 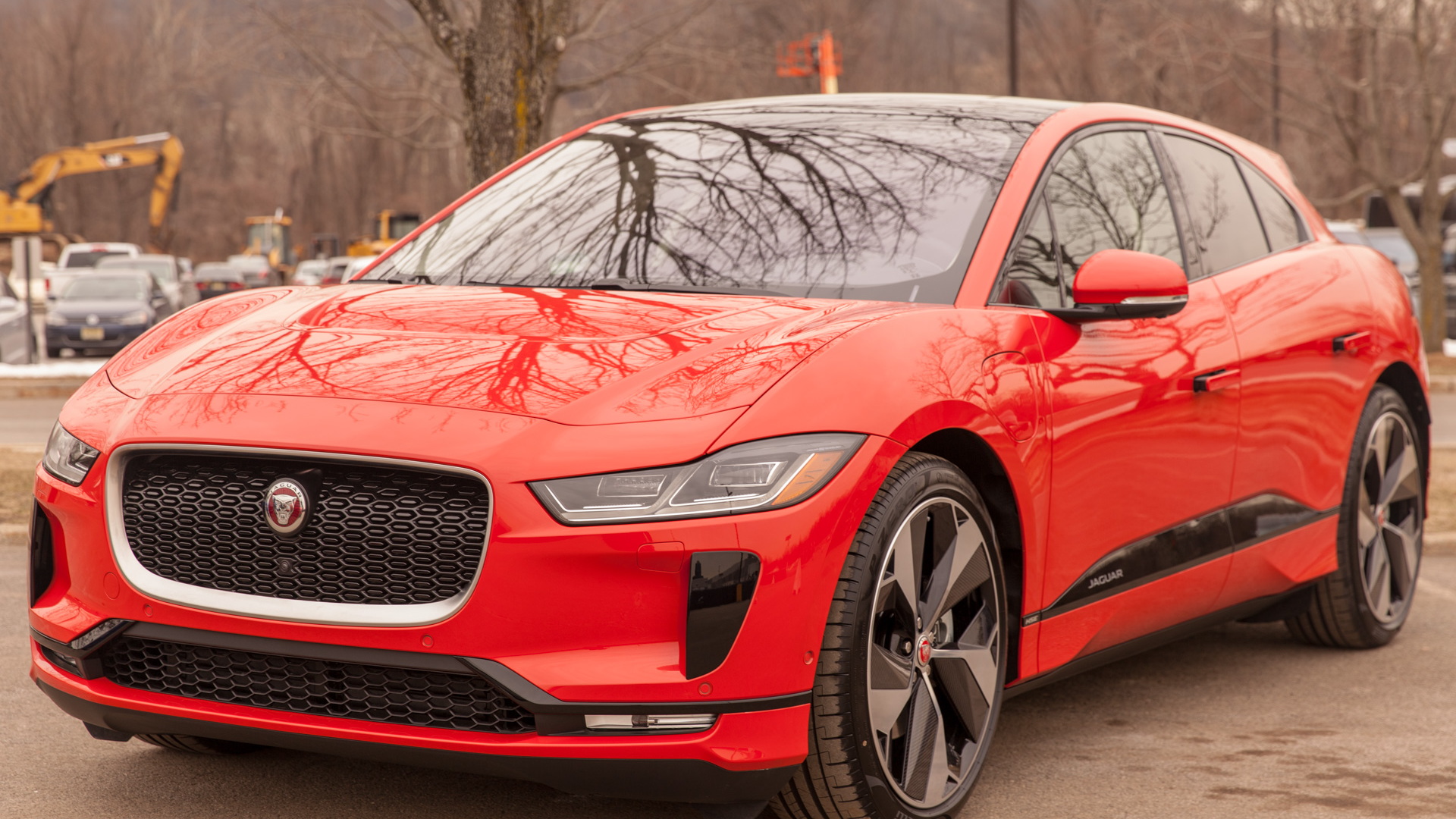 A parking lot in suburban New Jersey isn’t the first place I’d look for a revolution.

According to Jaguar, it’s where ours will start.

After just over four minutes behind the wheel of the 2019 Jaguar I-Pace, the electric Jaguar feels like the beginning of something.

As the first luxury battery electric vehicle from a mainstream automaker, the I-Pace will be followed by many more from other automakers—dozens if the timeline stretches far enough into the future.

Its all-electric powertrain is hardly revolutionary. The 90-kilowatt-hour liquid-cooled lithium-ion battery tucked under the cabin floor of the I-Pace, and its twin 147-kilowatt motors at the front and rear axles, hardly register as a surprise anymore.

That extended timeline will eventually expand to include the more classic Jaguars in the automaker’s renovated headquarters in Mahwah, New Jersey. The past is equally important as the future in the I-Pace.

Planted next to sexy E-Types and sturdy, boxy Land Rovers, the I-Pace’s “spaceship” design is more than a departure. Revolution? Maybe.

I get one shot at driving an I-Pace, on an improvised autocross course at Jaguar’s new U.S. headquarters.

Gray skies, gray asphalt, and a gray I-Pace lacked flavor, so the electric Jag had to provide color for the day.

The 432 lithium-ion cells that power the I-Pace also add prodigious weight to the tall wagon’s frame. Despite a length just fractions of an inch greater than a compact XE sedan, the Jaguar I-Pace interior feels as large as a full-size XJ sedan—and its 4,800-pound curb weight feels closer to a Range Rover.

Unlike any car or SUV from the automaker, the I-Pace replaces Jaguar’s rotary drive selector with three silver buttons—for reverse, neutral, and drive—and a black button for park.

They flank a lower touchscreen for climate controls, which sounds more complicated than it is. It’s modern, but hardly “Star Trek” stuff.

Jaguar took a similar simple tack for the EV drive. The I-Pace can be programmed to creep at idle when the driver releases the brake (functionally irrelevant for most EV owners) or sit still.

It can also toggle between drive modes: one is a two-pedal, comparatively Victorian drive, the other offering aggressive regen (up to 0.4 G) for effective one-pedal operation.

There is no sport or “Ludicrous” mode, and virtually no ability to vary how the twin motors deliver power. Call it “EV for Beginners,” which should cover most I-Pace buyers slow to adopt electric powertrains.

But the electric Jag moved fast. Its 512 pound-feet of torque is near-instant and convincing after a stab at the accelerator. Power is split equally between front and rear motors, delivering an urgent but not abrupt takeoff into our parking-lot gymkhana.

Steering the heavy I-Pace is hardly a chore: The wheel is light and vaguely connected to the road. The car’s weight may be its greatest liability—it pitches and rolls, just as physics tells it to—but four-wheel independent suspension assisted by standard air suspension is one of its best assets.

Around the course, with increasing speed, the I-Pace compensated well for its weight. It feels and rides tall like a Subaru Outback, but manages some of its body motions better.

The I-Pace darted quickly through the cones with a whiff of fun from the rear end.

Our autocross was scored not only on time, but also efficiency and distance traveled. After my brief stint behind the wheel, I learned that while my time was mid-pack, my distance traveled was lower than those of earlier drivers, aided by the Jag’s easy control around the cones.

More time would have revealed more about the I-Pace’s driving dynamics. I think they’re very good. Weight and a tall ride height are the I-Pace’s biggest enemies, aided by big wheels without much sidewall give.

The car delivered a ride that never crashed over bumps or felt flinty through the 255-section Pirelli P Zero tires—but total distance covered was only slightly more than most people travel to their mailbox.

The I-Pace displays operating information on a large, 12.3-inch driver display serving as the instrument cluster that shows state of charge, estimated range, and speed.

A 10-inch touchscreen for infotainment is horizontally oriented—no vertical tablets in the I-Pace, a nod to convention for its mostly new EV buyers. A smaller touchscreen with variable-function knobs for climate control, some vehicle features, and redundant infotainment controls sits below.

From behind the wheel, the I-Pace carefully keeps away from anything too abstract. Aside from a few indicators and minus the murmur of an idling engine, the I-Pace is all but indistinguishable from the rest of the Jaguar lineup.

Designer Wayne Burgess said initial interior design concepts drew wild shapes for the cabin, but they were tempered by crash regulations and the requirements of accommodating the wide varieties of human form and associated appendages.

When it goes on sale later this year, Jaguar expects the I-Pace to appeal equally to EV adopters and luxury buyers who will be drawn to the spacious, but conventional, interior.

In that way, the 2019 Jaguar I-Pace is hardly a visible revolution.

But for luxury shoppers who’ve been on the sidelines, waiting for a mainstream luxury manufacturer to make a long-range battery-electric vehicle, the I-Pace will be a revelation.

Jaguar provided travel and lodging to Internet Brands Automotive to bring you this firsthand report.