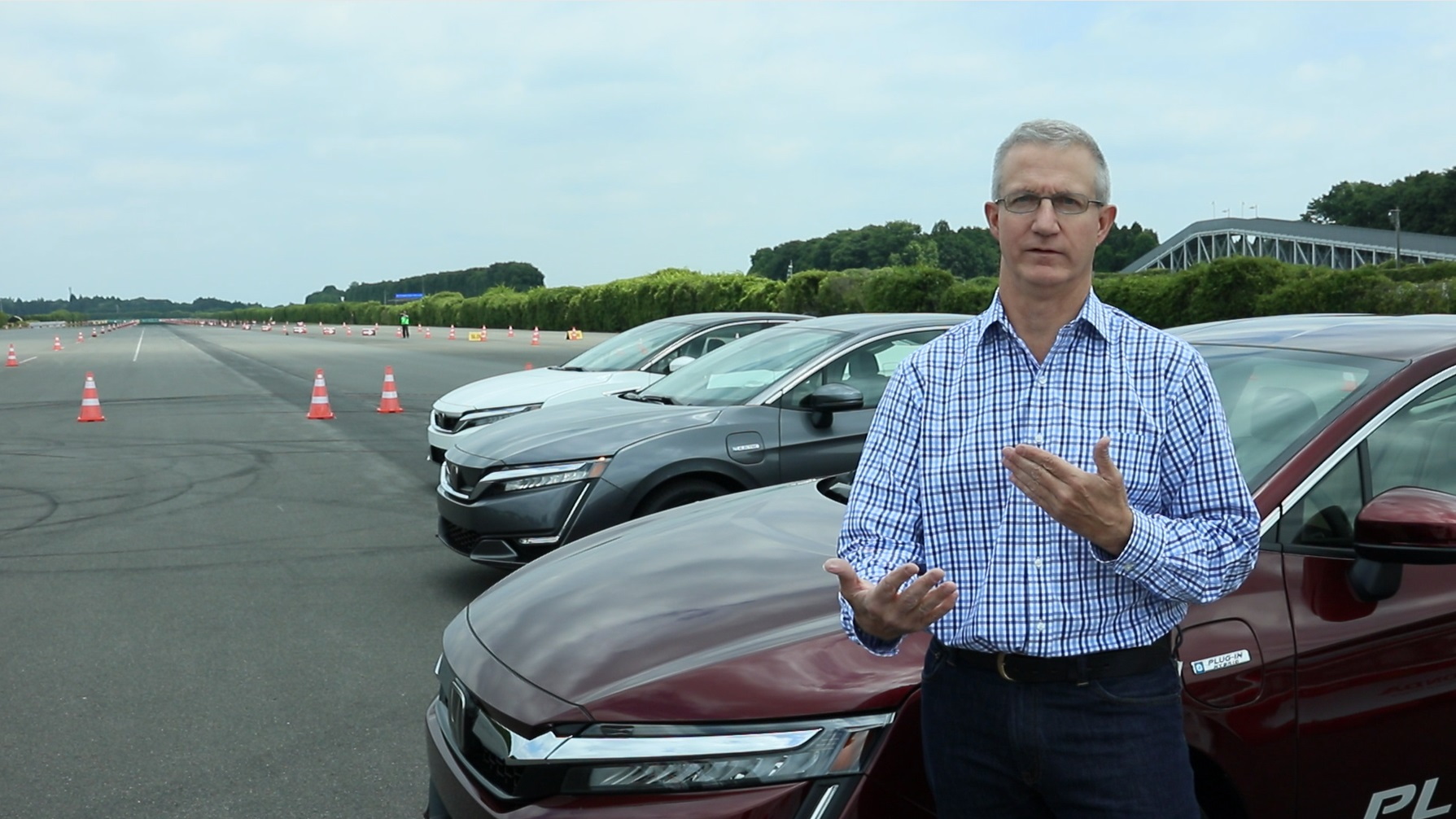 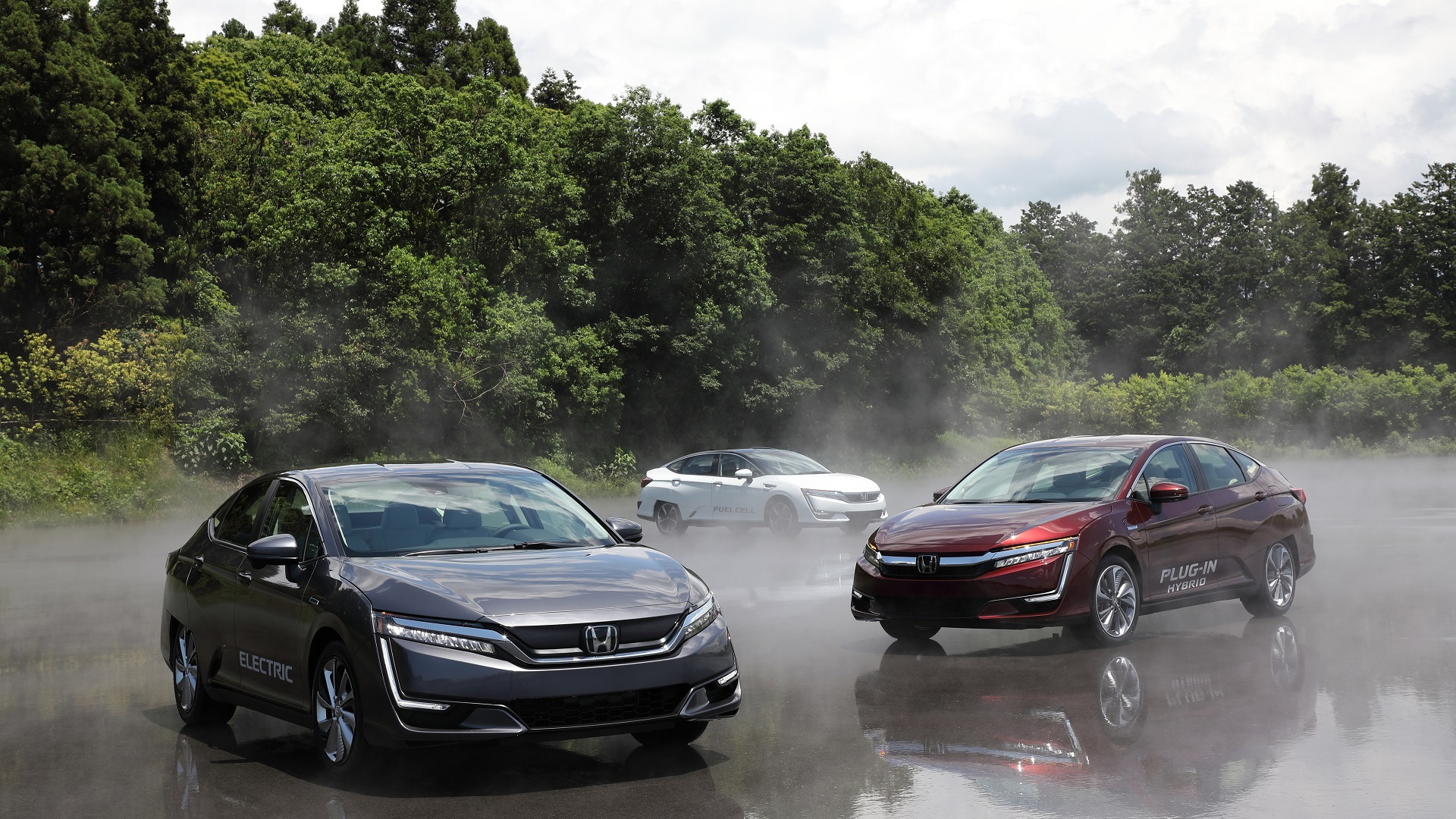 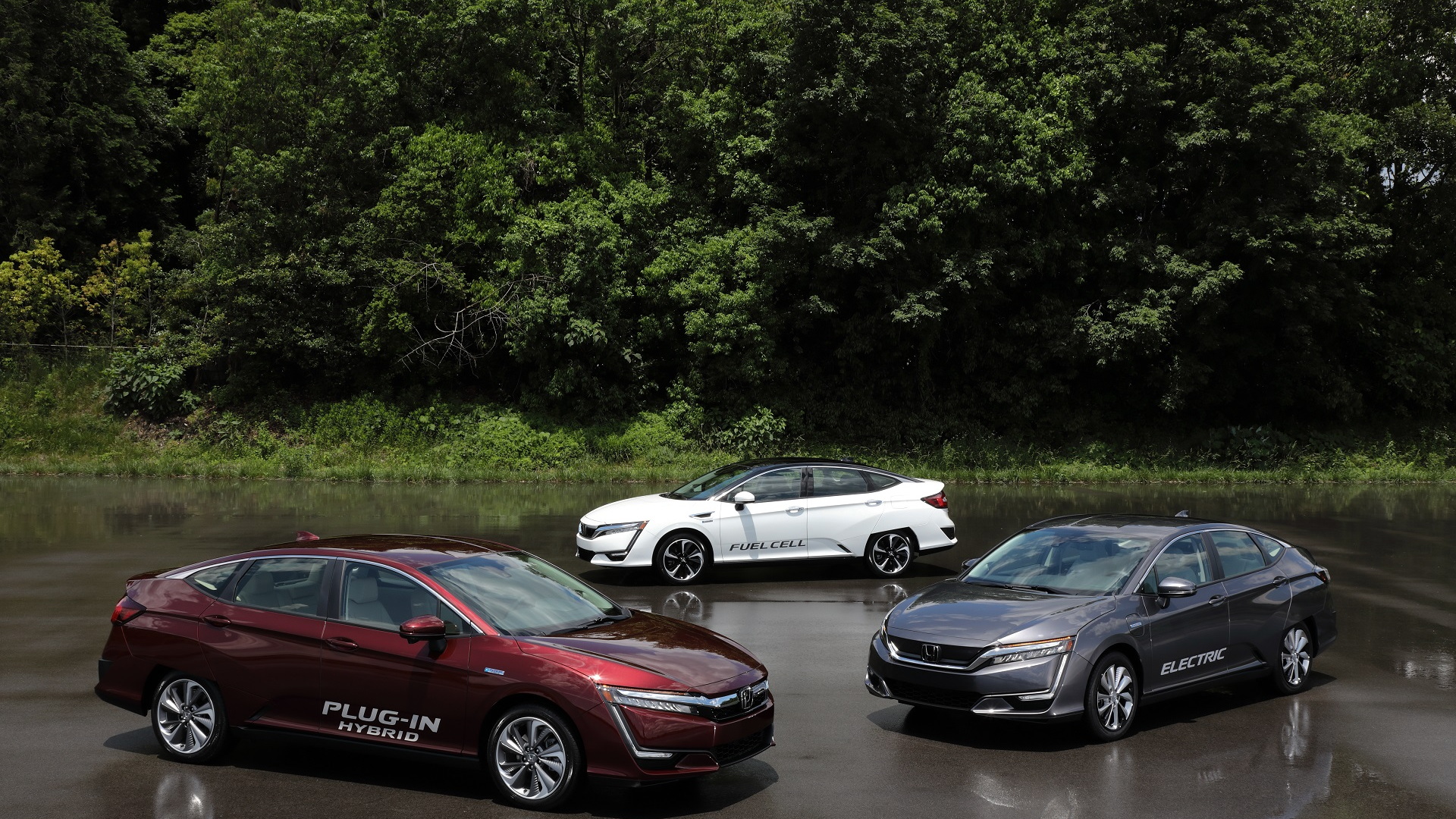 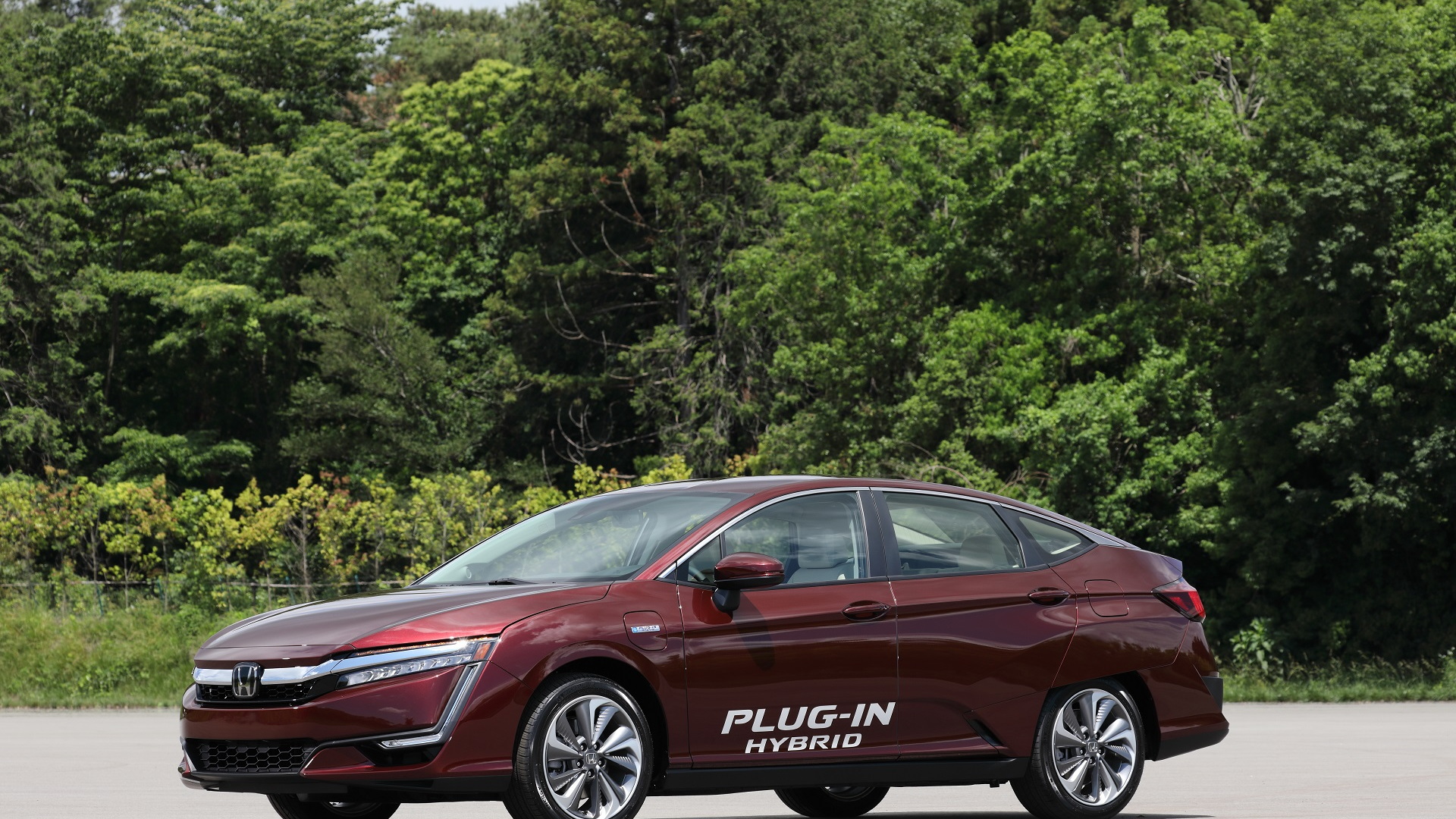 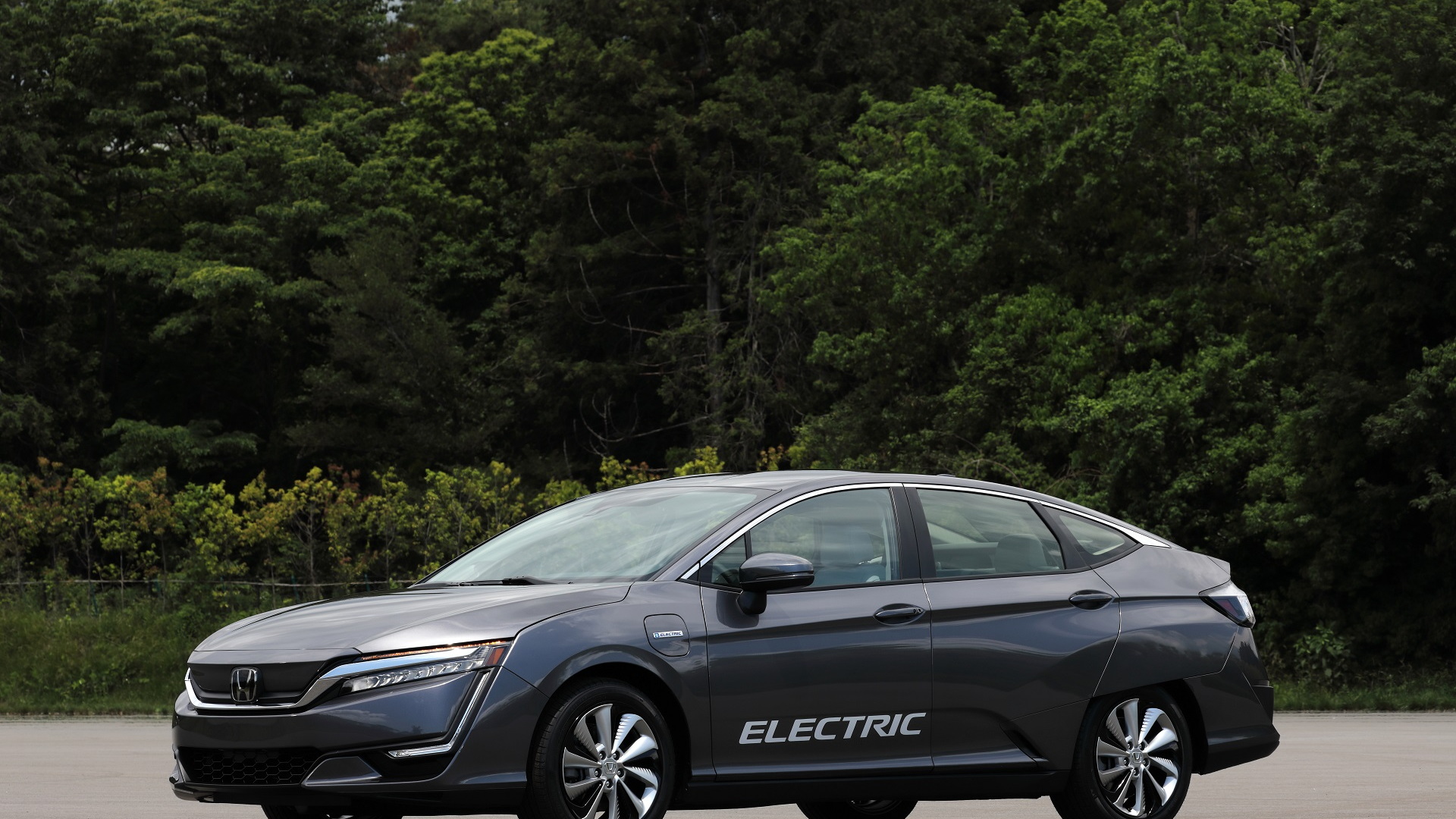 In March, we spent most of a day with the Honda Clarity Fuel Cell, the first of three variants of the Clarity mid-size sedan to go on sale in the U.S.

Leases of the hydrogen-powered Clarity will be limited for the foreseeable future to residents of those areas of California near to hydrogen fueling stations, but two more versions are on their way.

The 2017 Honda Clarity Electric, a battery-powered sedan with an expected EPA range of 89 miles, will join the U.S. lineup within several weeks—"it's right around the corner," we were told—and a plug-in hybrid version will arrive very late this year as 2018 model.

DON'T MISS: Assessing the Honda Clarity range: how electric cars fit in, and why

We've now had a chance to drive the two plug-in models, albeit very briefly, on a short course at Honda's R&D Center in Tochigi, Japan, as part of the biannual "Honda Meeting" event, which combines technology presentations and demonstration rides and drives in test cars and future models.

Neatly arrayed on the track were three Clarity sedans: the Plug-In Hybrid was maroon, the Electric was charcoal grey, and the Fuel Cell model was white with its distinctive contrasting black roof.

We covered the same course in sequence in each of the three models, with a different Honda engineer riding along in each car to answer questions.

Consisting essentially of two straightaways for high-speed acceleration and a series of gradual and tight curves at the end that connected the two, we had only 2 or 3 minutes behind the wheel of each version.

It's clear that Honda set out to give all three versions essentially the same performance, with a 0-to-60-mph acceleration time we'd estimate at around 9 seconds.

The hydrogen- and battery-powered versions felt most similar to each other, not surprising since both are driven by electric motors—with only the source of the electricity to power them varying.

The grey all-electric Clarity felt very much like the hydrogen version we'd spent a day with, with relatively little whine from the motor or power electronics.

Our biggest surprise was that it had very little discernible regenerative braking. It felt much more like a conventional vehicle with an automatic transmission than it did like, say, a BMW i3 or a Chevrolet Bolt EV, each of which offers the prized "one-pedal driving" experience.

That's understandable in the Fuel Cell version, which can only store a little bit of regenerated energy in its hybrid-size battery pack (just over 1 kilowatt-hour), but it seems like a missed opportunity in a battery-electric vehicle.

The engineers we spoke to nodded and took notes at this observation.

The electric Clarity felt as though it may have been slightly quicker to accelerate from a standing start than the Fuel Cell version, but we'd have to do instrumented tests to confirm that, and any difference was minor.

Then we got to the plug-in hybrid version, the one we were most curious about given that it's the only one to be available throughout the U.S. and the only one that'll be sold as well as leased.

With an estimated 42 miles of electric range (final certification is still some months away), we were curious to find out whether it was fully electric until the battery was depleted (like a Chevrolet Volt) or used the engine to provide maximum power when needed (like virtually every other plug-in hybrid).

The answer turned out to be the latter, but Honda's engineers have provided enough power from the electric drive motor that it's possible to drive fully electrically in almost any operating circumstance.

The engineers have provided a detent (they called it a "click") in the accelerator travel that has to be overcome to get the engine to kick on for maximum power.

Flooring the pedal and pushing through the click switches on the 1.5-liter 4-cylinder engine, which quickly builds to a muffled howl as it delivers maximum power along with the drive motor.

But briefly testing the car in "Hybrid" mode, which allows battery capacity to be conserved for later use, we found the engine to switch on so quietly and gently in most cases that it was close to imperceptible.

The plug-in hybrid Clarity is 1.2 seconds quicker to accelerate from 0 to 60 mph, our Honda engineer said, but it can reach 100 mph (160 km/h) in electric-only mode if the driver keeps the pedal above the detent.

Handling of all three cars, despite their very different powertrains and weight distributions, was good but clearly that of a large, heavy, relatively luxurious sedan. These are no Civic Type R hot rods, in other words, but big, comfortable mid-size sedans with premium interior trim and features.

A couple of other factoids about the Clarity Electric we gleaned from our short drive:

We shouldn't overstate our time spent in the two plug-in Clarity versions; these are early first impressions, and we hope to spend more time with one or both when they become available to U.S. buyers and lessees.

A final note: Honda has clearly learned to appreciate the enthusiasm of its earlier Fit EV drivers, some of whom have asked for and received a second renewal of their leases on the cars (some of which are now five years old).

While the company continues to feel that hydrogen fuel cells are the appropriate zero-emission powertrain for larger vehicles, it seems to be edging closer to taking battery-electric vehicles more seriously as well.

Last October, Honda set up a dedicated Electric Vehicle Development Division to design, engineer, and test entire battery-electric vehicles, which it had never had before.

The team's mandate, said Honda CEO Takahiro Hachigo, is to develop a dedicated battery-electric vehicle for regions of the world outside China, which it plans to introduce this fall at a global auto show.