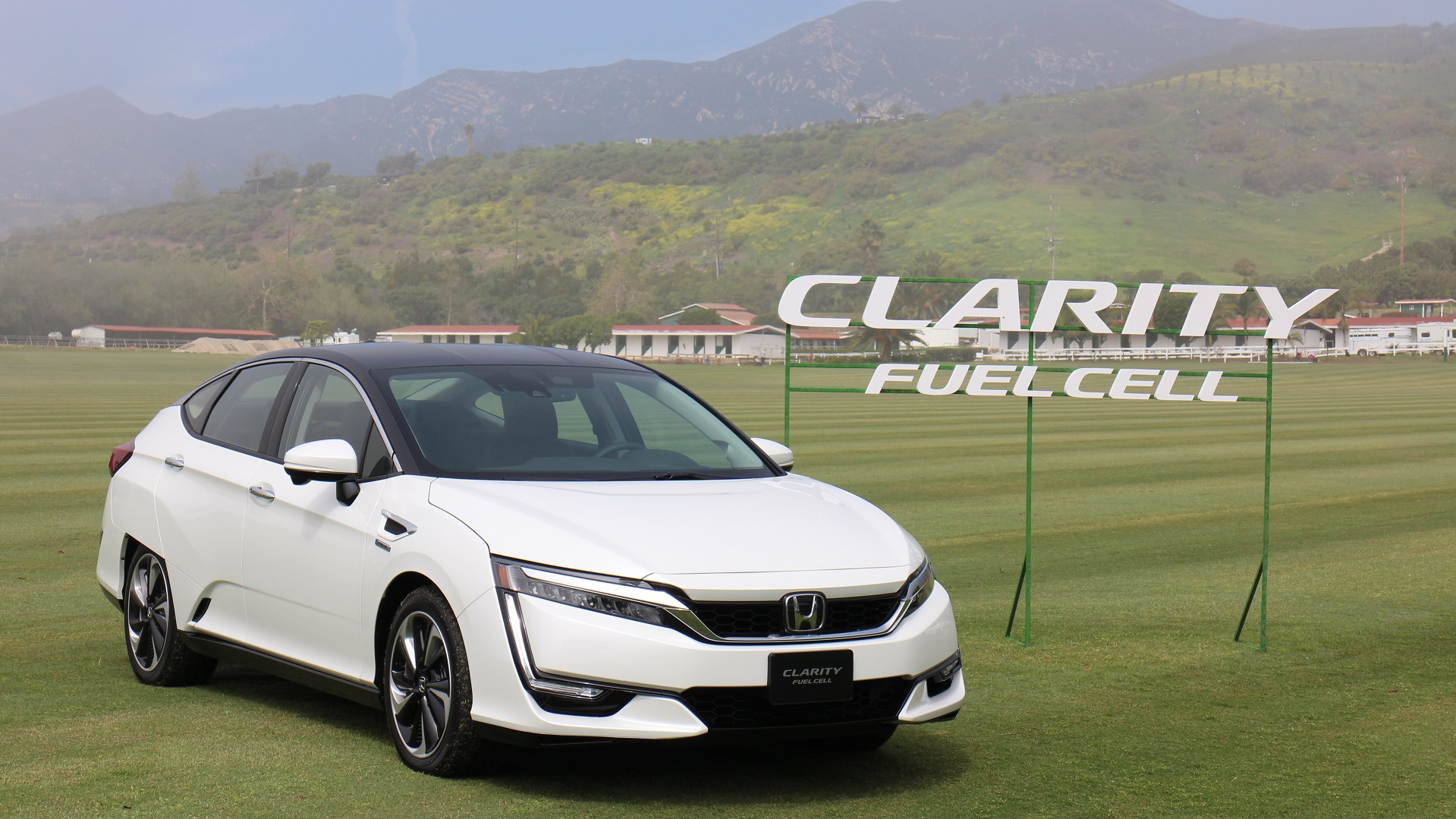 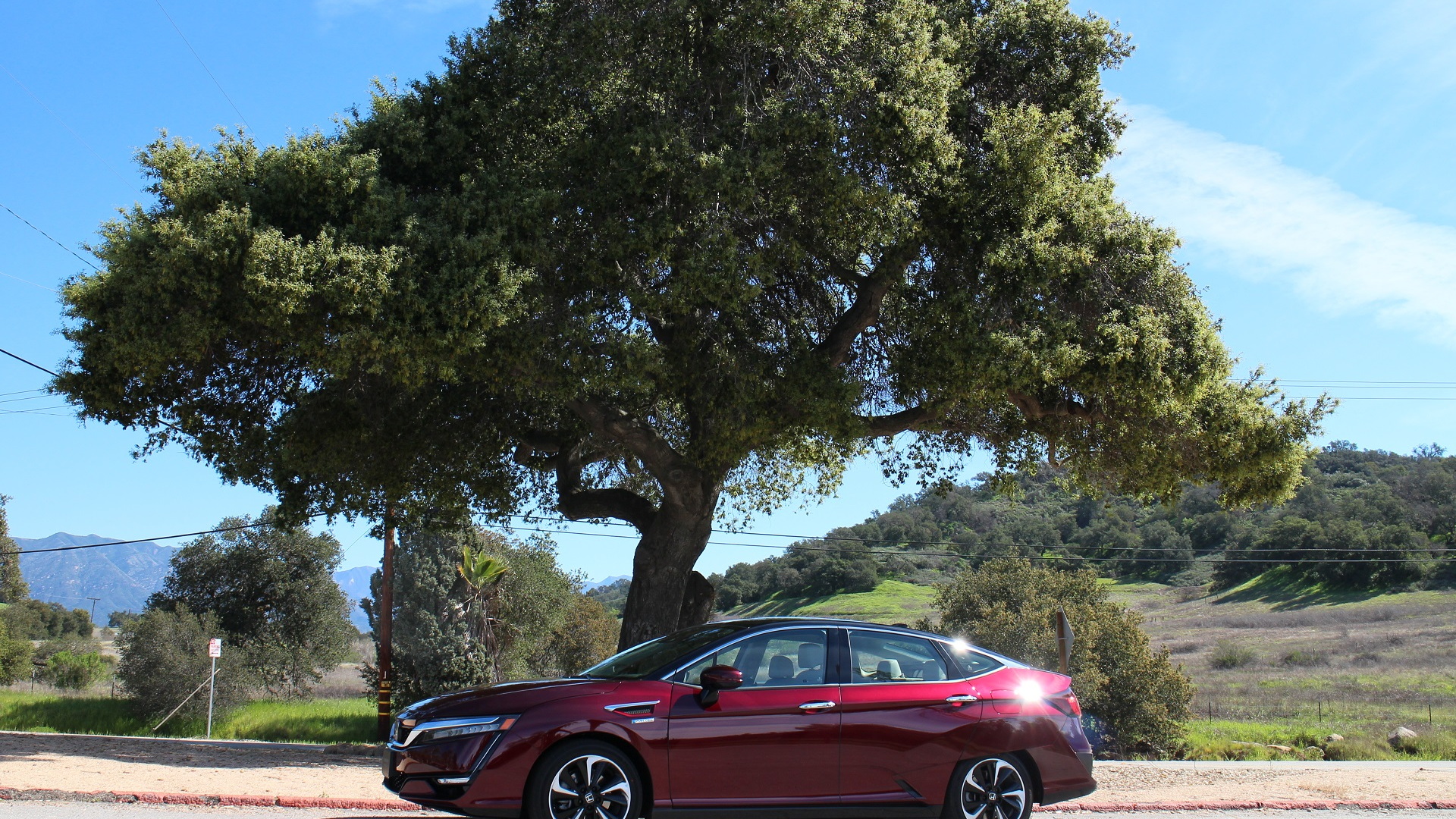 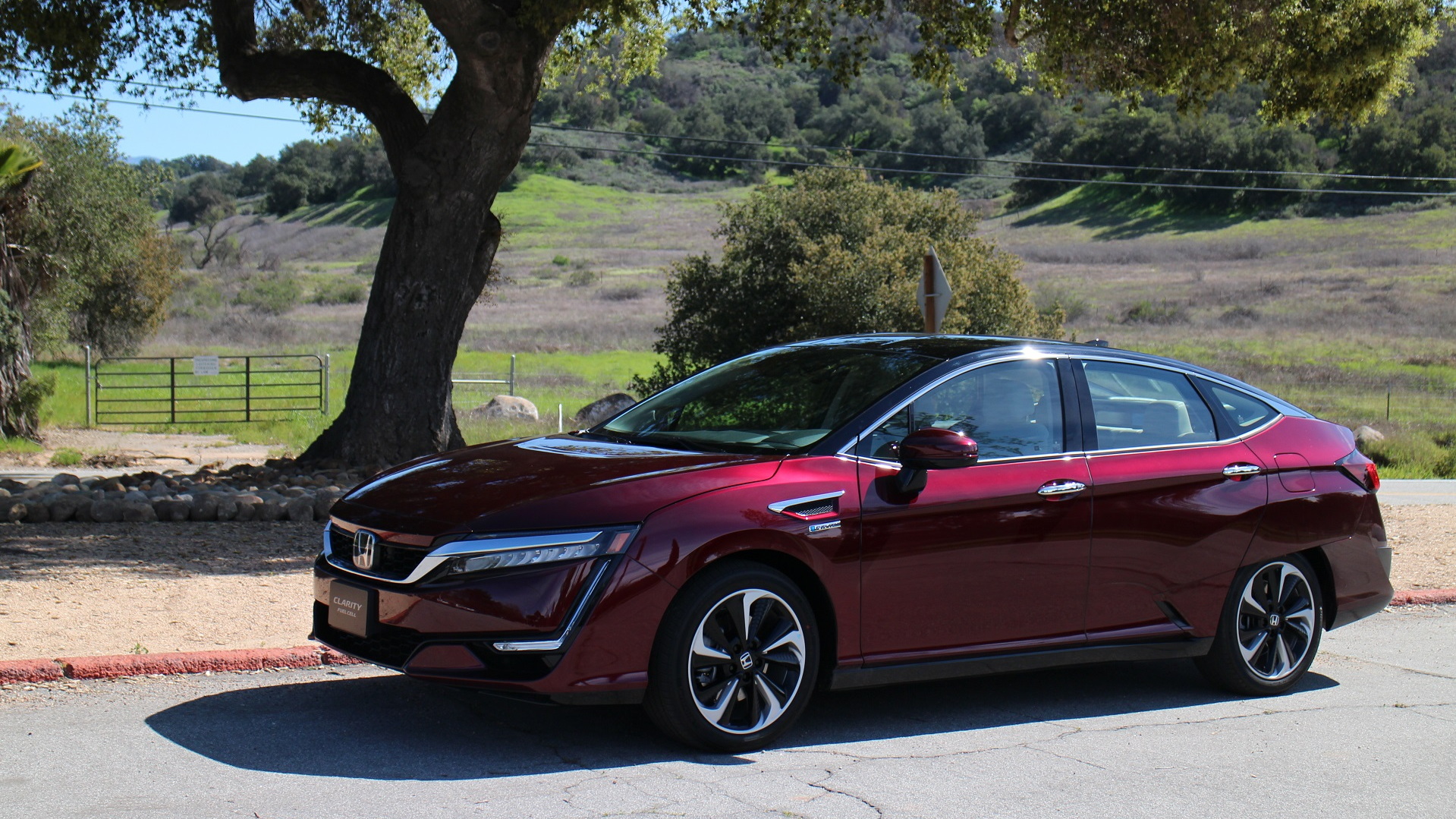 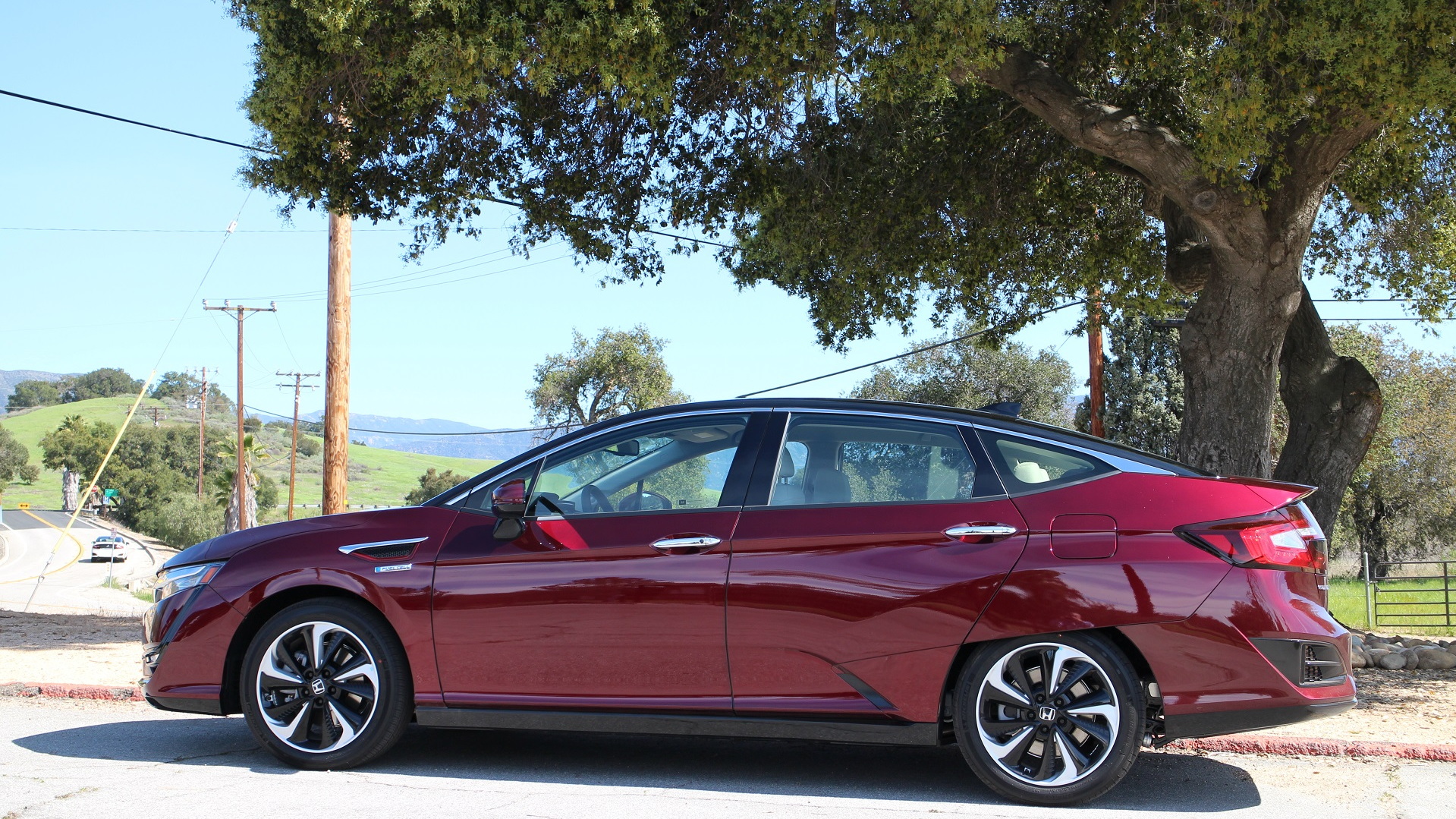 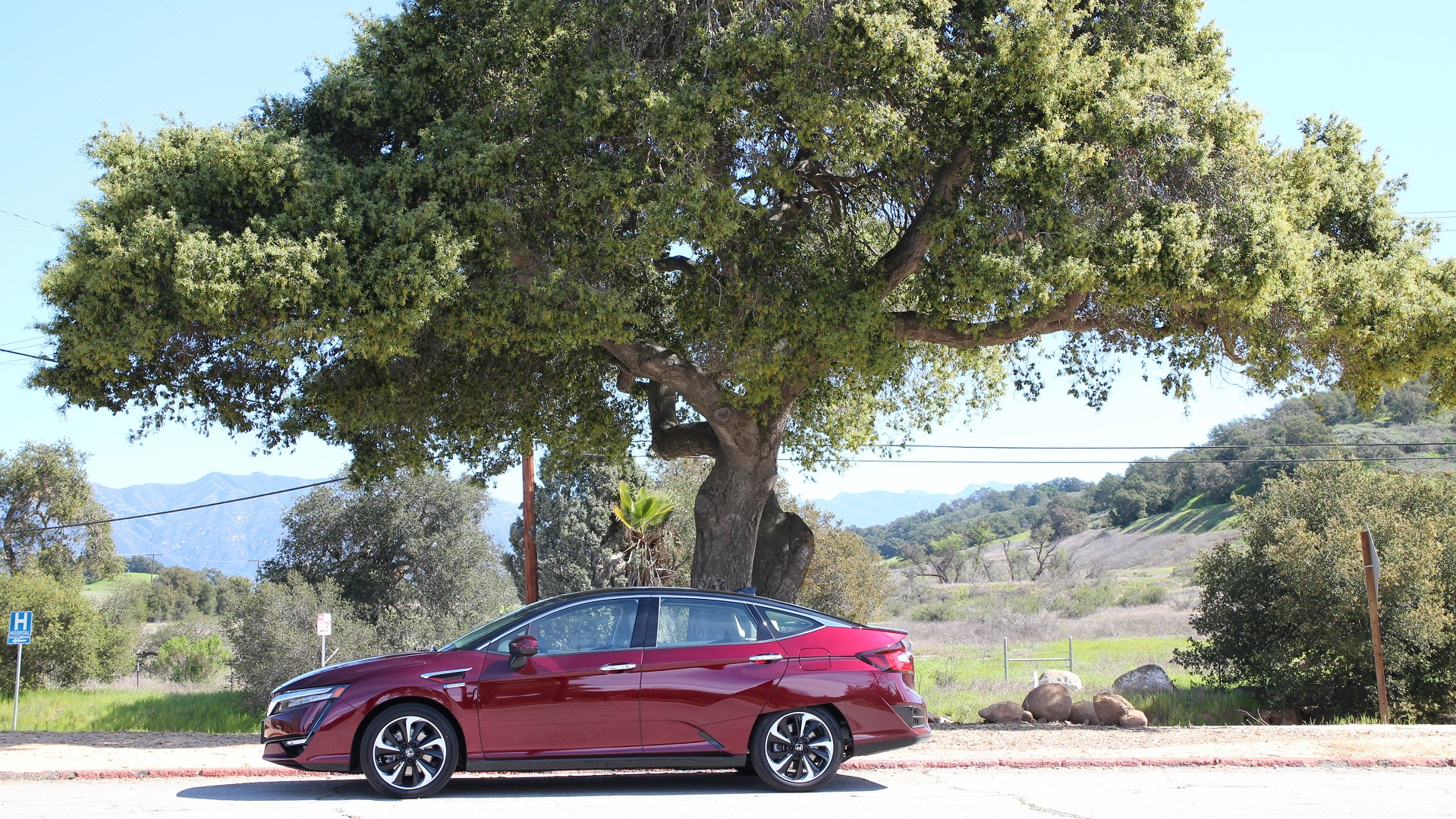 There are now three different vehicles powered by hydrogen fuel cells on sale in California, and we've driven them all.

The 2017 Honda Clarity Fuel Cell is the first one in which we were able to forget about the powertrain and simply drive.

It's the best of the three, although that won't matter much to the majority of U.S. car buyers who live outside the limited regions of California where it's on sale.

The Clarity is a mid-size sedan, with some strange exterior design cues but a spacious, comfortable, and pleasant interior that's nicely appointed.

The sedan's very high, blunt tail lowers its wind drag, but the need to accommodate a large, high-pressure tank for the hydrogen fuel sitting crosswise behind the rear seat skews the proportions.

That's the same setup as in hatchbacks like the old Honda Insight and three generations of Toyota Prius, but somehow looking out the back through a locked trunk seemed odder. We got over it.

The soothing two-tone interior of our maroon Clarity Fuel Cell test car even stretched to a pale suede-like material on some dash surfaces.

The overall impression is of much higher quality than the mass-market plastic of the Hyundai Tucson Fuel Cell or the oddly designed and often hard-plastic shapes of the Toyota Mirai. Well done, Honda.

On the road, Honda has done a better job of suppressing noise, vibration, harshness, and mechanical sounds than Toyota did with its Mirai—in which pumps, compressors, airflow, and other noises were a frequent, if subtle, background presence.

The Clarity simply drives like a large electric sedan, complete with some electronics hum under certain circumstances.

That's hardly surprising, since it's powered by a 130-kilowatt (174-horsepower) electric motor driving the front wheels.

But rather than a large battery pack that can be recharged by plugging it in, the Clarity's electricity comes from a hydrogen fuel cell with an output of up to 103 kilowatts.

Both the fuel-cell stack and its associated power electronics are packaged under the hood, taking no more room than a V-6 engine and transmission combination.

There will be two additional Clarity versions at the end of this year: a battery-electric version, though reportedly with just 80 miles of range, and a plug-in hybrid model that replaces the limited-production Honda Accord Plug-In Hybrid sold in 2014 and 2015.

Our drive, however, was only of the hydrogen-powered Clarity. For details on the other two, we'll have to wait until next month's New York auto show.

We started the trip with an indicated 194 miles of hydrogen range, and sampled the refueling experience at a "True Zero" station in Santa Barbara, California, operated by First Element Fuels.

Fueling was as simple as promised, complete with paper receipt from the pump after it was completed.

Perplexingly, though, the available-range display had risen from 194 miles to just 258 miles, even though the tank appeared on the gauge to be full.

That's a far cry from the EPA rating of 366 miles of range from the Clarity's 5.5 kilograms of highly compressed hydrogen. That number is higher than the Mirai's 312 miles, the Tucson Fuel Cell's 265-mile rating, and even any Tesla model now on sale.

Honda executives explained that the range estimate on the meter varied considerably with driving style; that'll be an experience that's quite familiar to electric-car drivers.

We can only assume the folks who had prepared the Clarity test cars had hammered them considerably, since several other journalists also noted sub-300-mile range indicators when full.

The Clarity didn't provide the surge of instant torque from a stop that any electric car delivers; its off-the-line performance isn't bad, but it's more measured.

Its fuel cell has to be fed more hydrogen to come up to full power, and the battery pack under the front seats that it uses to meet sudden power demands is just 1.7 kilowatt-hours, about the same size as the one in a conventional hybrid car.

After a couple of standing-start acceleration runs, our rough estimate for 0-to-60-mph acceleration was 9.2 seconds, slightly quicker than the Toyota Mirai we also tested.

That's on a par with some mass-market electric cars (though not, perhaps, mid-size luxury sedans at the Clarity's price of more than $50,000).

The Clarity Fuel Cell can be leased for $369 a month with $2,500 down by qualified residents who live or work near one of the 12 Honda dealerships designated to sell the Clarity Fuel Cell: six in Southern California, five in the Bay Area, and one in the state capital of Sacramento.

The cost of hydrogen is an interesting question, though: our top-off of 1.2 kg of True Zero hydrogen fuel cost $20.46 for 66 miles of added range indicated.

That doesn't pencil out against even a 25-mpg sedan running on gasoline at $4 a gallon, let alone a 56-mpg Toyota Prius Two Eco, one of the most efficient non-plug-in cars on the market this year.

As for electric cars charged at home, costs per mile are likely lower yet.

As noted, we liked our time in the Clarity.

It's got better power than the hydrogen Tucson, which we found worrisomely lacking in acceleration at highway speeds, and it's more refined and pleasant inside than the Toyota Mirai.

For buyers who don't mind confining all their driving to parts of California, it's another zero-emission alternative.

And with a three-year lease and heavily subsidized hydrogen fuel, it could provide a green alternative for lessees who can't easily charge an electric car at home or at work.

The marketing, however, with floating childrens' heads over a 40-year-old Fleetwood Mac song ... that, we still find a little creepy.