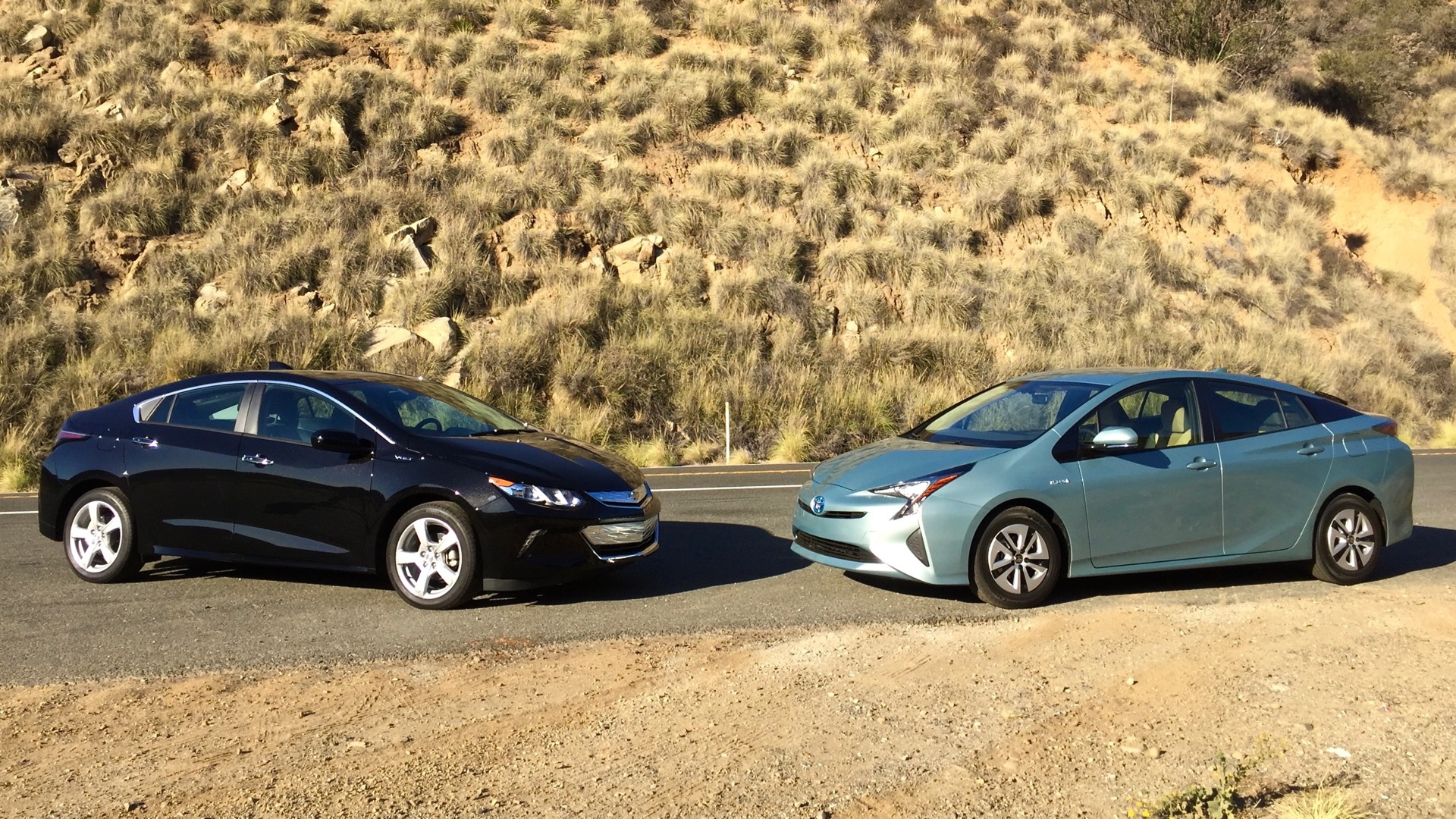 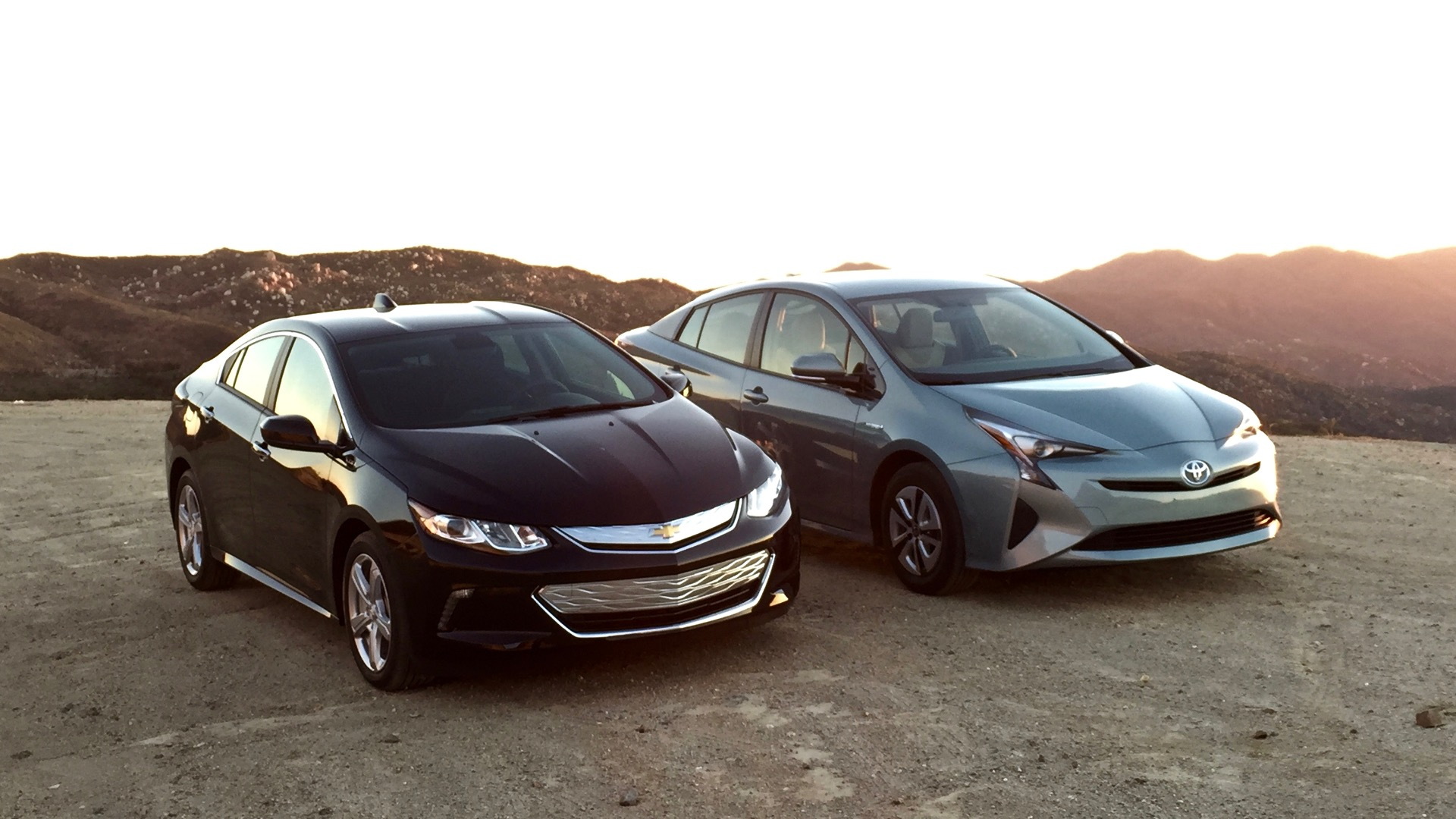 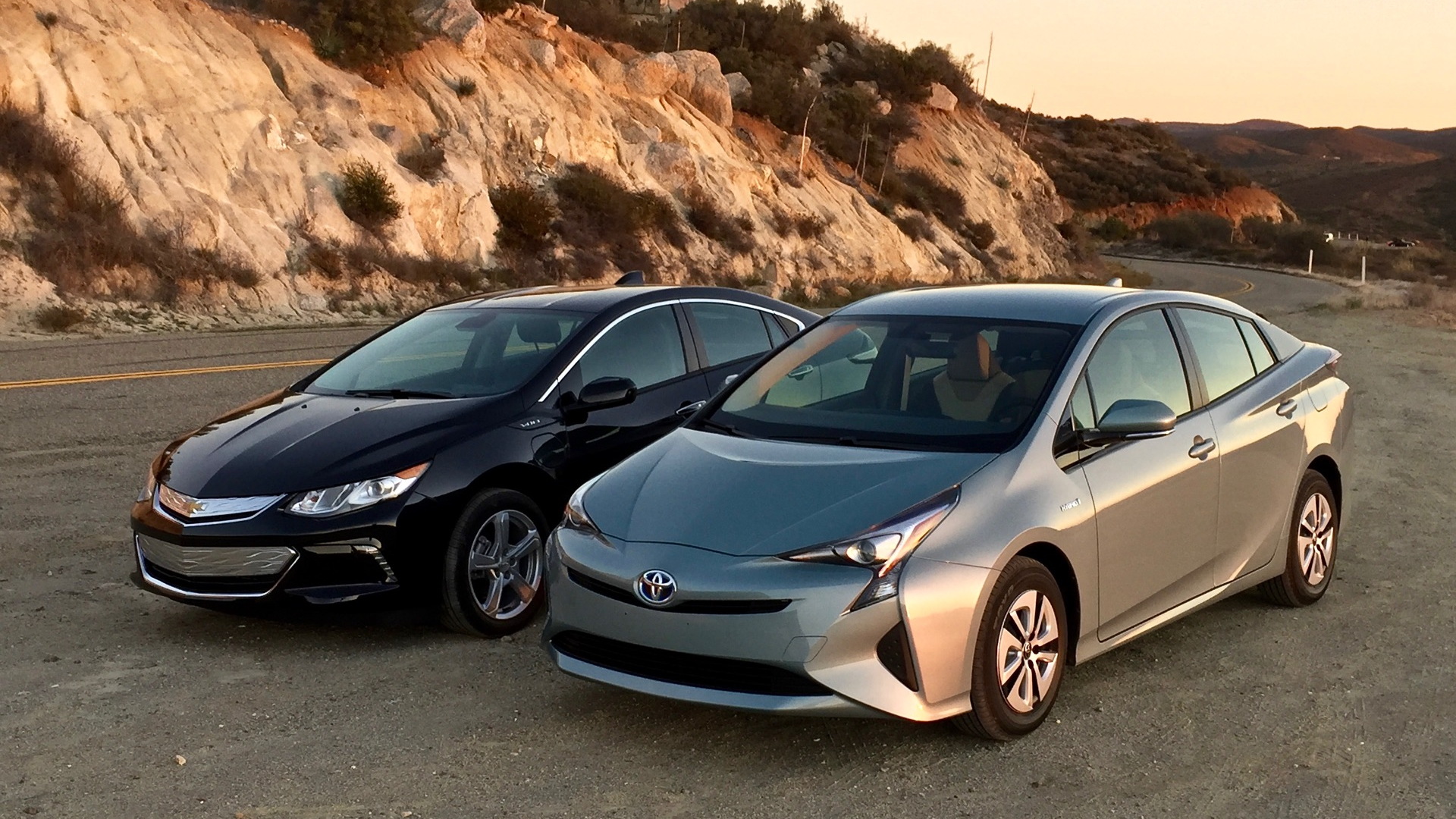 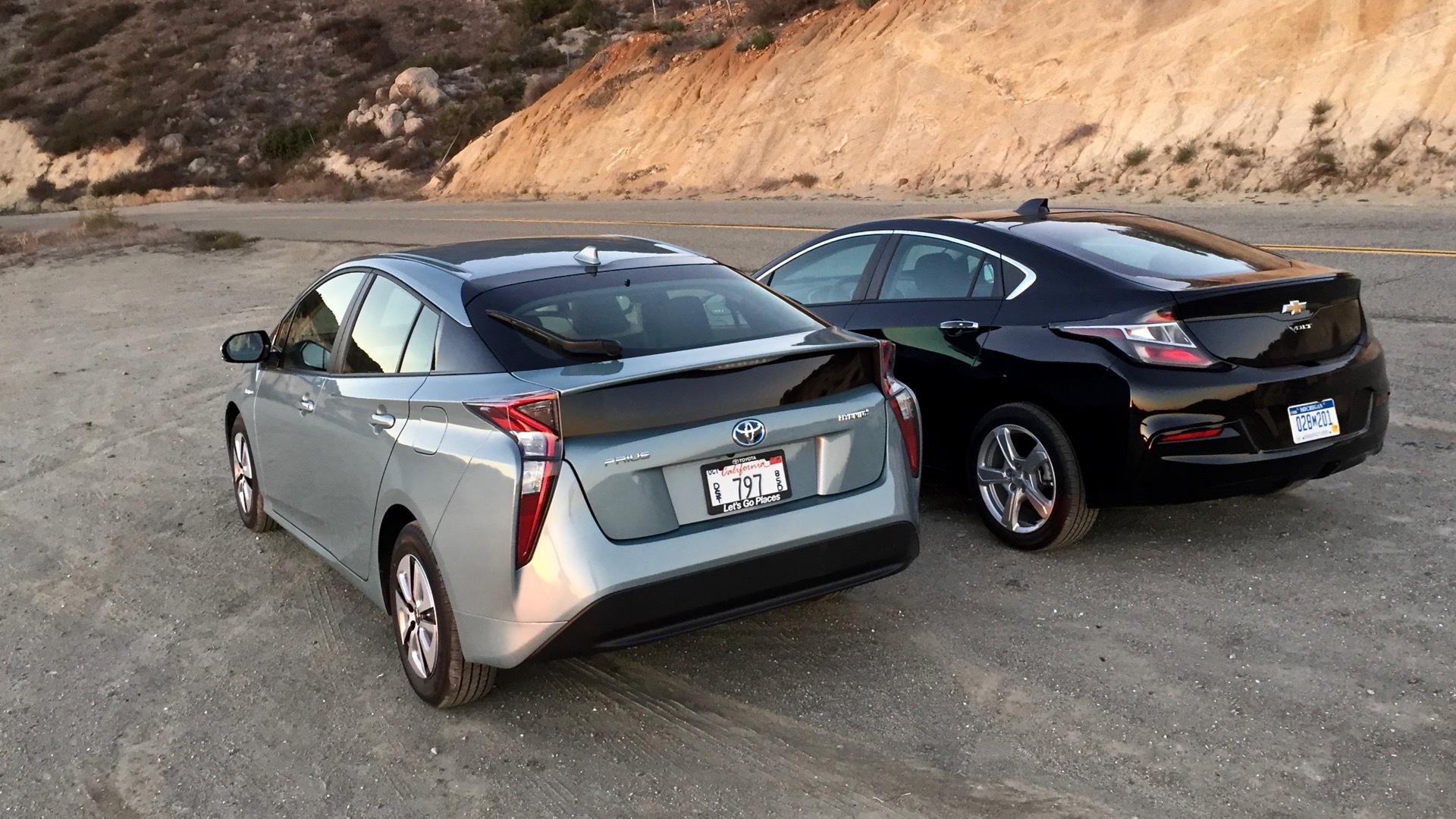 They're both green-car leaders--in the public eye and in EPA energy-efficiency ratings.

But the new 2016 Toyota Prius and 2016 Chevrolet Volt take very different approaches to delivering that efficiency.

The newest Prius is the latest generation of the world's best-known, and best-selling, hybrid car.

It's lower and less slab-sided than the last one. It's still a five-door hatchback, but now it has a lower nose, a floating roof, and a rear end that may not be to everyone's taste. It makes the previous car look sedate.

Inside, the dash is more coherent and has larger color displays with better graphics--though the centrally placed instruments still give it a bit of the spaceship-command look.

But it's fuel economy that the new Prius is built to deliver. All but one model are rated at 52 miles per gallon combined; the Prius Two Eco comes in at 56 mpg combined.

On the road, it drives a lot more like a regular car. The driver sits more than 2 inches lower this year, in a much more rigid body structure with a sportier trailing-arm rear suspension.

No one will buy a Prius for sports-sedan handling, but this version feels far more normal behind the wheel, with confident roadholding and decent steering.

It's no longer numb, remote, and appliance-like--and that's a huge advance.

It's also quieter inside. The engine is still obvious under full acceleration, but it's better muted--and it no longer has a desperate, strained howl. Acceleration is about the same as the old car.

The new second-generation Volt stays true to the original concept of a range-extended electric car. But it also fixes most of the shortcomings of the original.

The new Volt's a much better-looking car than the old one, with a more rakish profile and crisper lines.

It's a five-door hatchback too, but the dash is lower and the sides are more sculpted, so it looks leaner and prettier.

Inside, Chevy's cleaned up the driving interface--the irritating touch-sensitive switches are gone, and the more conventional controls make for a more intuitive driving experience.

Interior space isn't much bigger, but comfort is up, and the cabin's better-finished than before.

It can carry four adults in comfort, but the fifth seating position on the back bench is for emergencies only, since it straddles the battery pack.

The Volt's biggest change is its electric range, which rises from 38 miles to a whopping 53 miles. Overall fuel efficiency is up to 42 miles per gallon combined.

Chevy says nine of every 10 trips in the new car will be driven exclusively using the battery, recharged overnight from the electric grid--no gasoline involved.

The new Volt is quieter, handles better--and it's even less expensive, by a little bit.

So how do they stack up?

The Prius is no longer as numb and remote to drive as it has been. It's less Prius-y, more like a regular car. And there's that 52 to 56 miles per gallon rating, which we expect it'll largely deliver on.

If you don't have a place to recharge a car overnight, the Prius is the most energy-efficient car you can buy.

The Volt, however, is emission-free for most of your travel. Its electric motor gives a calmer, quieter, more pleasant driving experience.

We prefer the smooth, quiet, torque-y driving experience of the Volt--but the Prius is no longer punitive in that respect.

The Prius is almost $10,000 cheaper than the Volt, but the Volt will cost less per mile for most drivers, depending on electric and gasoline prices.

Either one will give you efficient, comfortable transportation for years to come.

But hybrids now seem to be a mature technology, improving only incrementally--while plug-in electric cars are improving each year.

The Prius is a safe choice for today; the Volt points the way toward tomorrow. It's your choice.

[EDITOR'S NOTE: As various readers have pointed out, we goofed on our voiceover track and said the Volt's previous electric range was 37 miles; we've corrected the text to reflect that the figure is 38 miles.

We should also note that the Volt is eligible for a $7,500 Federal income-tax credit and various state and local incentives, while the Prius gets no Federal credit and a considerably reduced menu of incentives.]