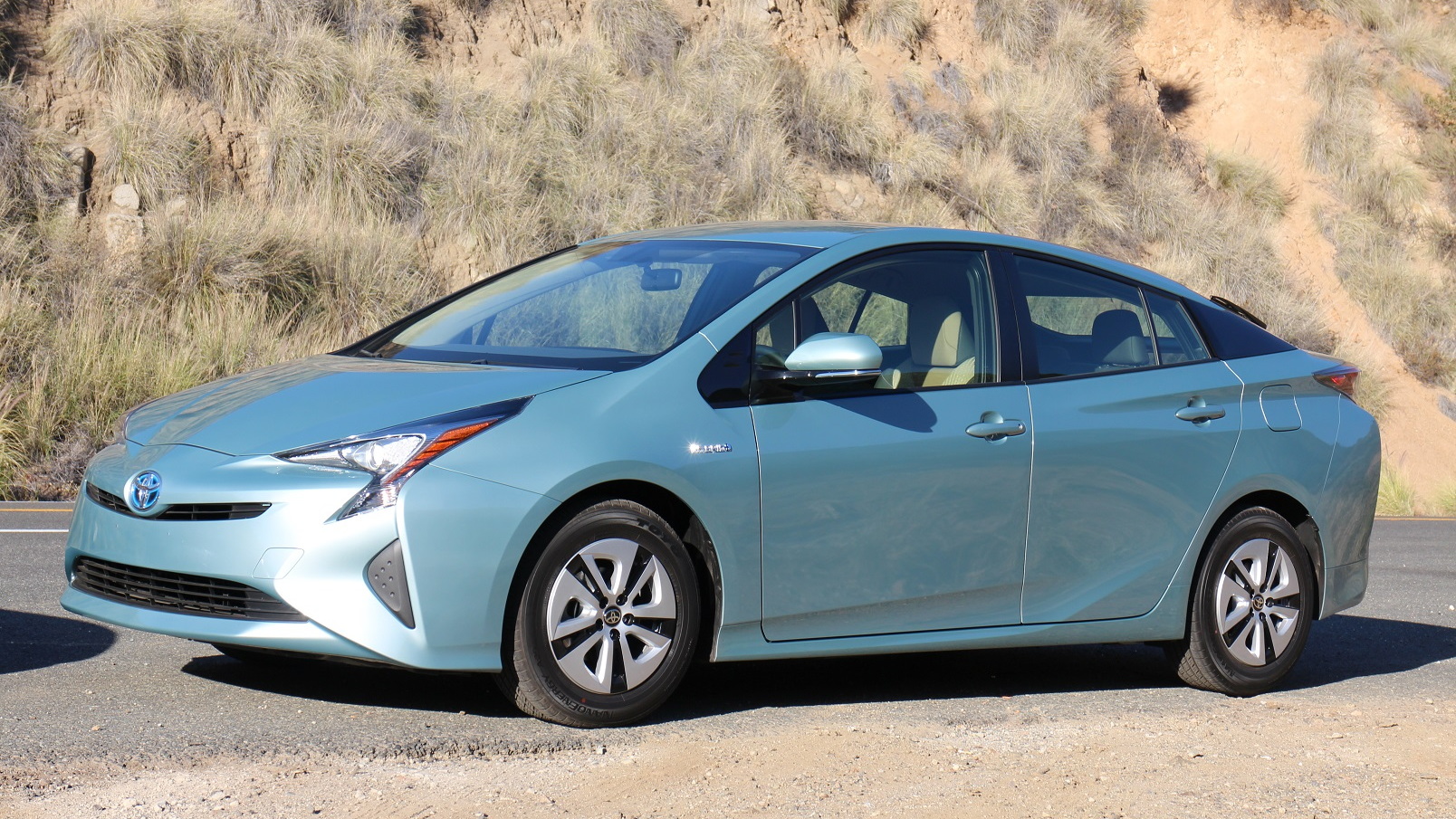 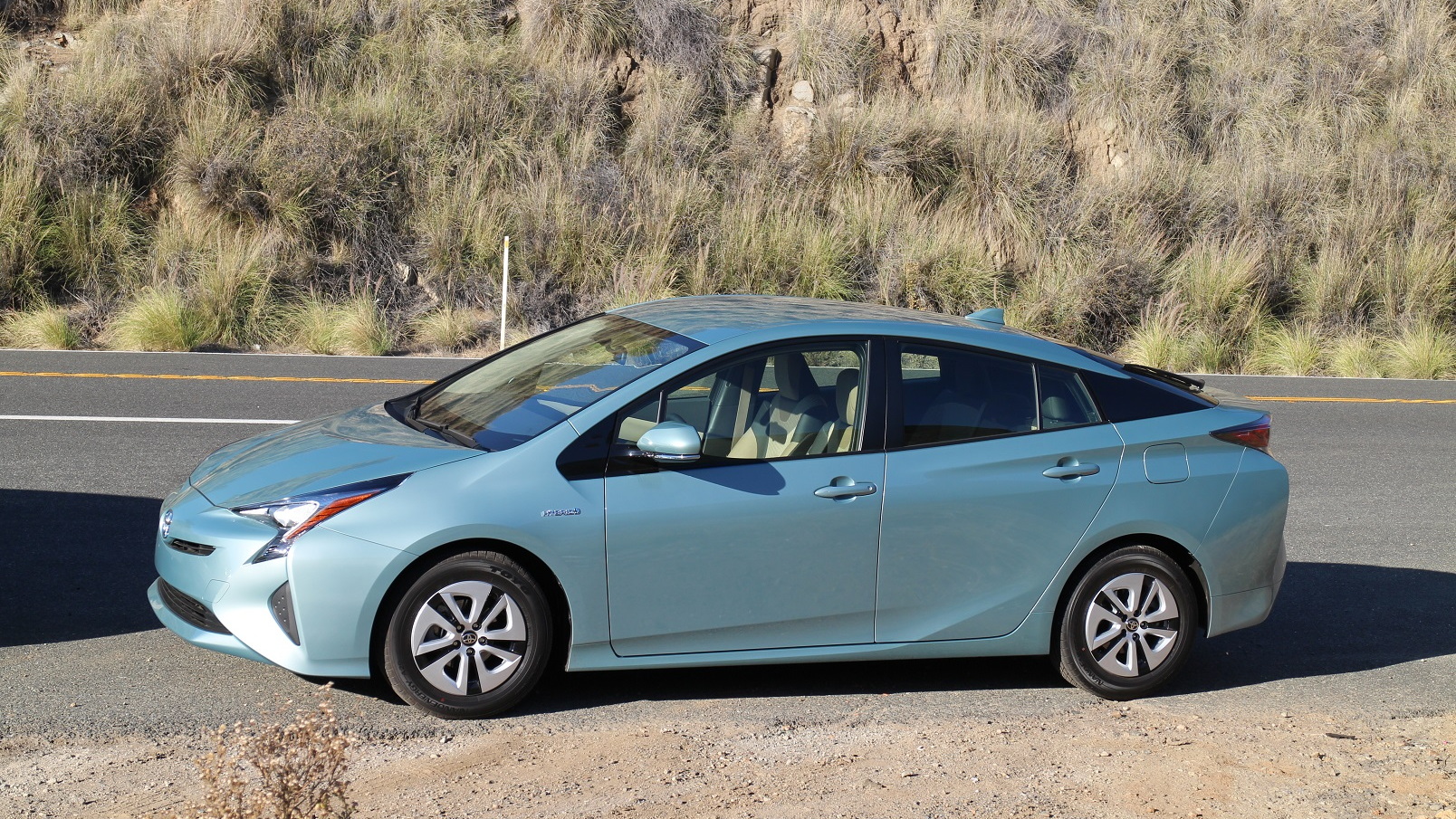 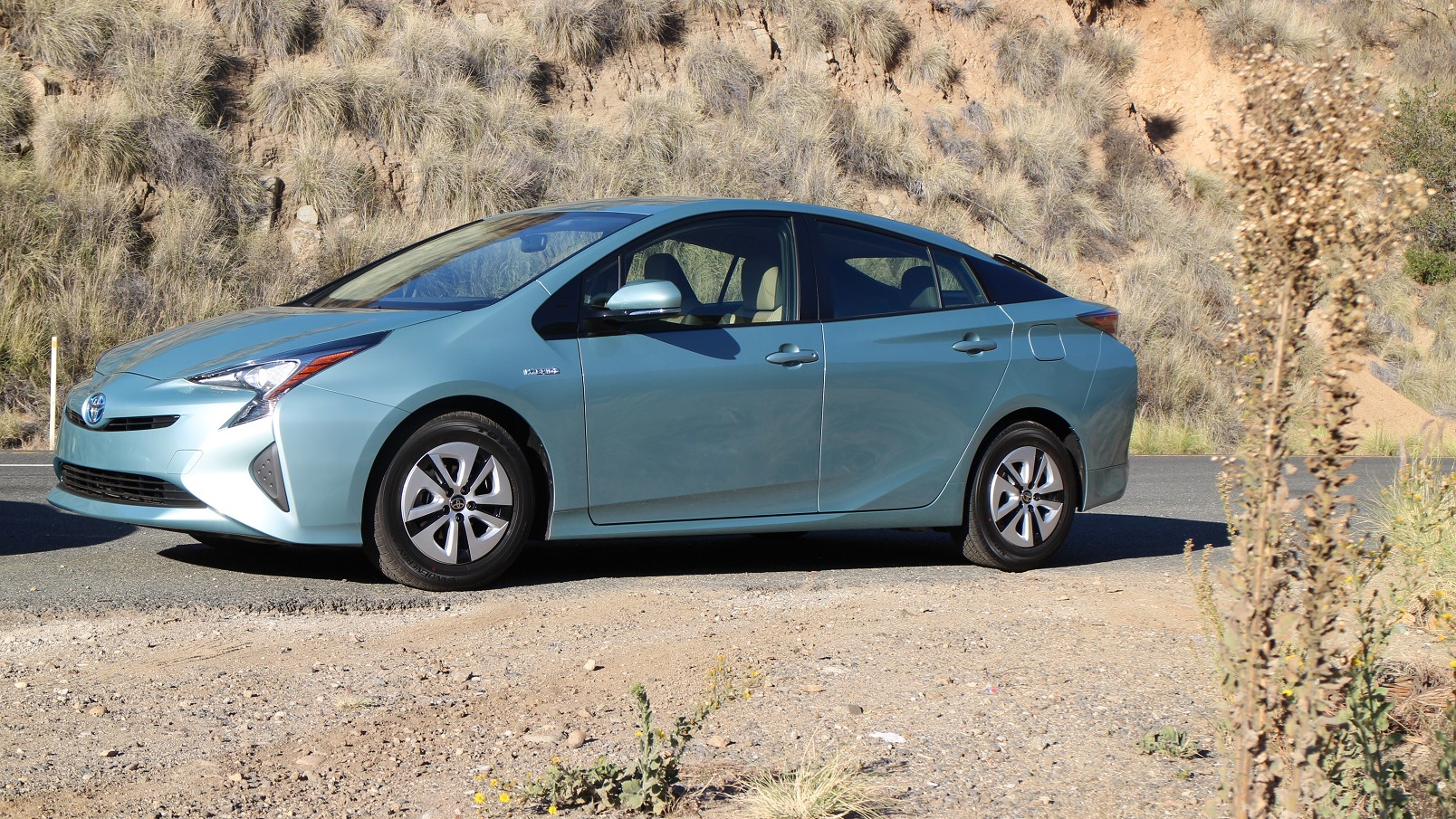 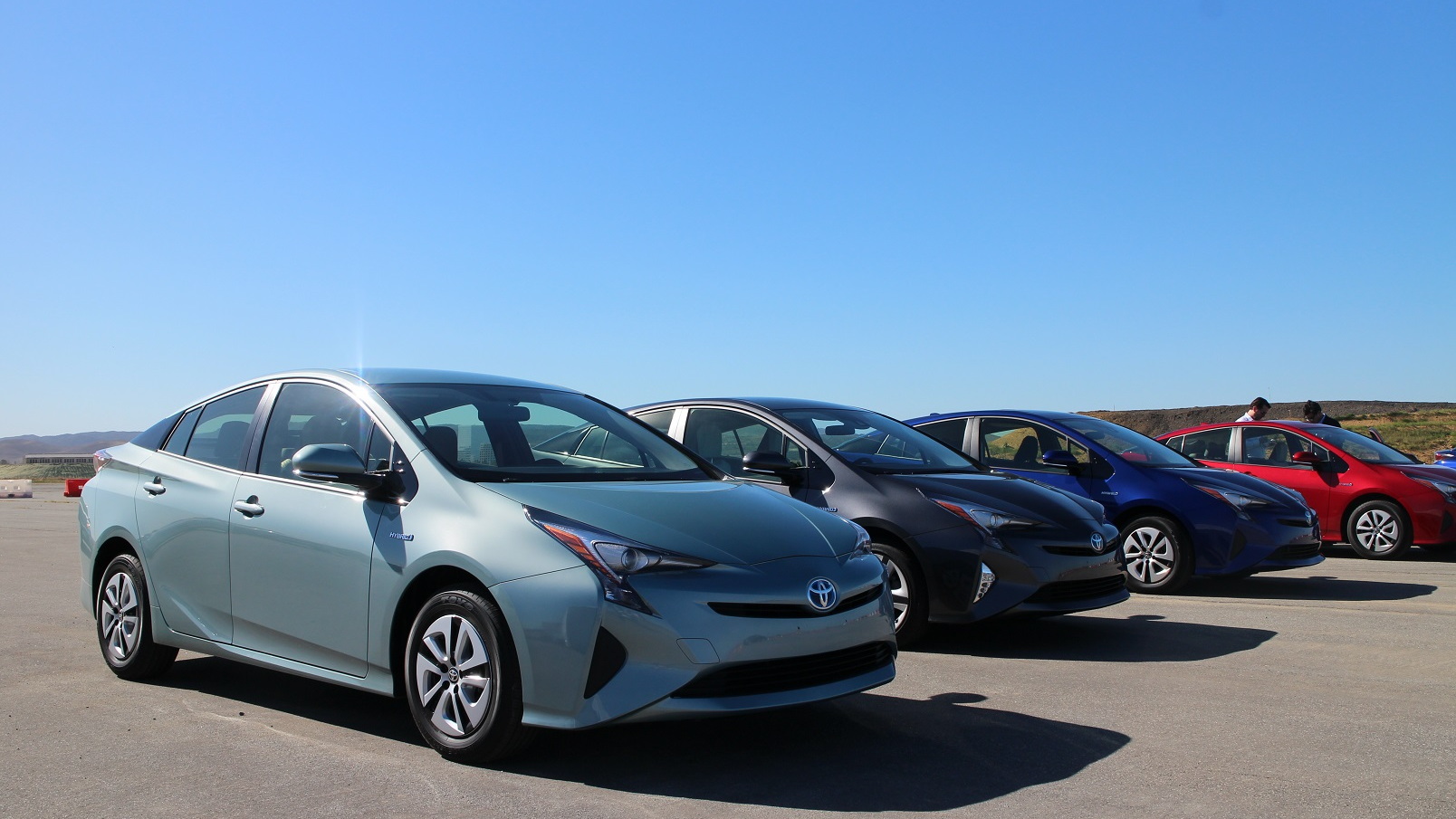 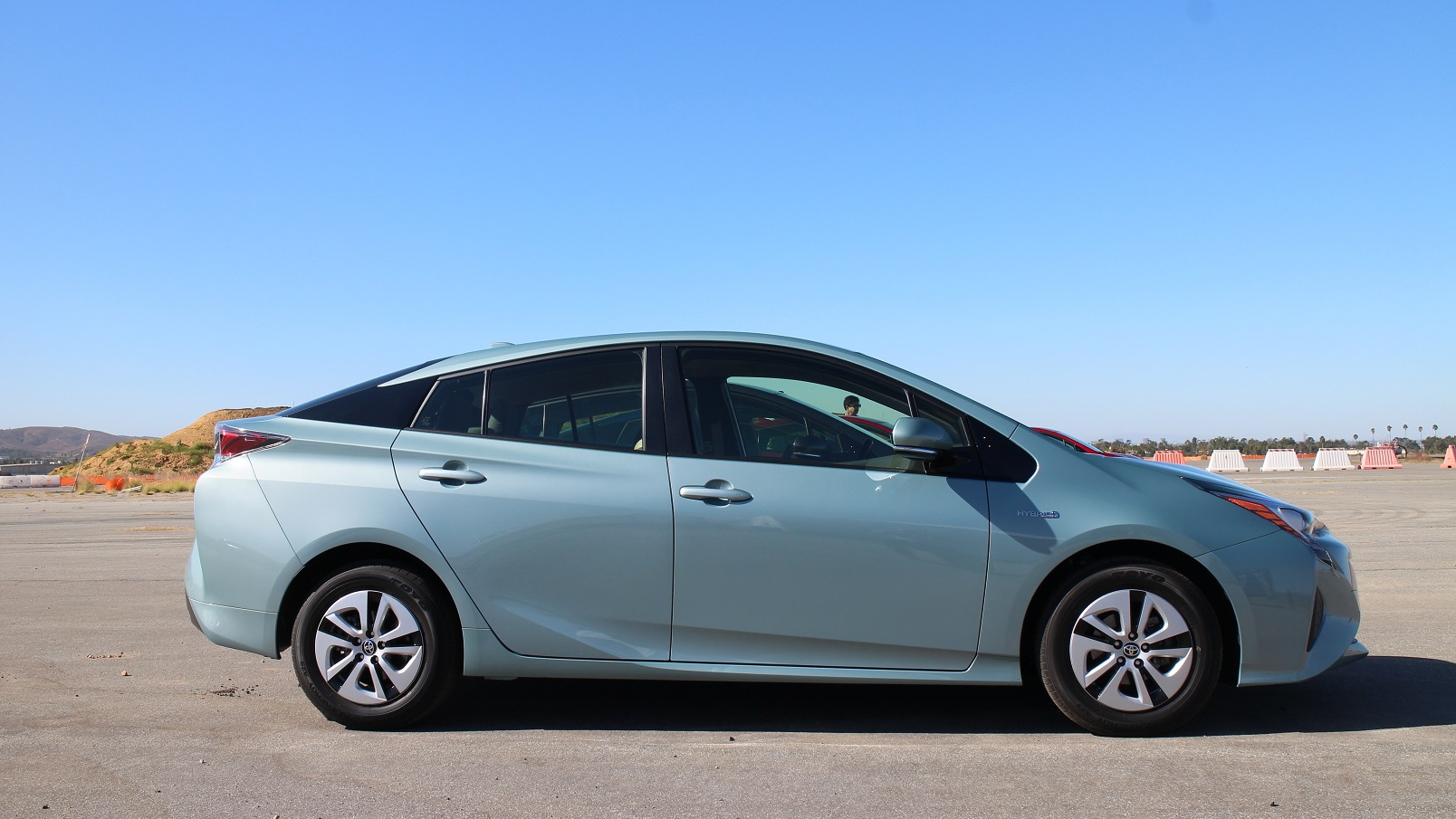 When a Toyota Prius drive event comes with a handling course, you know that things have changed.

And in some ways, the all-new 2016 Toyota Prius hybrid is a very different car from the three generations of Prius that preceded it.

Perhaps the main difference is simply that it drives, handles, and feels pretty much like a regular car from behind the wheel.

We've been very eager to drive the fourth-generation Prius hybrid, which debuted in Las Vegas in September and made its first auto-show appearance just weeks later at the Frankfurt Motor Show.

It'll start to arrive at U.S. Toyota dealers in January, but we were able to put almost 100 miles on a pair of 2016 Prius models this week at the media drive event, when Toyota released full details of the new vehicle.

The main reason to buy a Prius has historically been its fuel efficiency, and the new model retains its title as the most fuel-efficient vehicle sold in the U.S. without a plug.

But while Toyota executives had said the company was aiming for a 10-percent improvement over the last model's 50-mpg combined rating, the reality is slightly more complex.

The Prius Two Eco model, however, the lightest of all versions, delivers that 10-percent boost and a fraction more, coming in at 56 mpg combined (58 mpg city, 53 mpg highway).

Over the course of a long day spent in the two different models, including some spirited canyon driving and that handling course, we saw ratings on the car's fuel-economy meter ranging from the high 40s to 53.7 mpg.

We think it's safe to say that the new Prius should deliver a real-world 50 mpg under most circumstances, perhaps a bit less in cold weather.

Approaching the new Prius from the front, it clearly is the latest version of the Prius design idiom--but with a sleeker shape and a lower nose.

Toyota has made a point of noting that the Toyota badge on its nose no higher off the pavement than the badge on the Scion FR-S sports car, and the new car definitely looks lower and less slab-sided.

It's 3 inches longer, a fraction of an inch wider, and most importantly, the driver sits more than 2 inches lower in the car--which by itself gives the car a slightly sportier feel. Call it the anti-SUV seating position.

Accent lines below the windows and above the sills break up the flat metal of the sides, and it's not until the back of the rear doors that it all starts to go wrong.

While styling is obviously subjective, the combination of the traditional high tail with blacked-out roof pillars, tall question-mark shaped taillights, and a profusion of lines and creases produced grimaces in virtually every journalist in our driving wave.

Suffice it to say that at least the cars following you will know you're in a new Prius. No other vehicle looks remotely similar from behind.

Inside, the 2016 Prius uses nicer materials and less textured hard plastic, giving the cabin a more refined feel that's closer to the mainstream.

The dash sweeps around into the door caps, and we're especially fond of the available two-tone upholstery in a cream-and-beige combination.

The car's designers stuck with the single central Multi-Information Display at the base of the windscreen, now composed of a pair of 4.2-inch full-color TFT displays.

It's considerably cleaned up over the last version's monochrome and more chaotically laid-out display.

A color touchscreen now caps the vertical part of the center console, sitting slightly ahead of the dash itself and looking similar to the Toyota Mirai hydrogen fuel-cell vehicle--though slightly more restrained.

The 2016 Prius seats are a huge improvement over those in the last generation: They're less flat, with better contours from both the cushion and back-rest bolsters.

Toyota moved the peak of the new model's roof forward several inches--after boasting that they'd moved it rearward for the last generation--and that cuts into rear seat headroom.

The rear seat is also bolstered to move outboard occupants slightly inward--so in those rare occasions where a fifth passenger is riding in the middle, all three riders are likely to be somewhat uncomfortable because the outboard riders will be awkwardly angled against their bolsters.

With styling and comfort out of the way, it's really the driving experience that distinguishes the new 2016 Prius from any previous model.

Previous generations were renowned--and not in a good way--for utterly numb power steering, lack of feedback to the driver, and handling and roadholding that came in somewhere between remote and mediocre.

The new car's movements in curves and over rises are predictable, and there's decent feedback from the electric power steering.

Combined with the lower seat position, it's possible to throw the Prius through corners a bit--though it's no Mazda or BMW, and no one will ever buy the 2016 Prius for sporty driving.

But the new model pretty much drives like any other car, to the point where we frequently forgot we were in a Prius--something almost impossible to do with the old car if you had any experience driving other vehicles.

Part of the reason for the better handling and driving experience is a new rear suspension that uses fully independent trailing arms, rather than the semi-independent rear torsion beam of the old car.

Among other design changes, Toyota has moved the battery from its old location below the cargo deck to the space under the rear seat. Effectively, the battery and gas tank have swapped places.

And in a first for the conventional Prius hybrid, there are two battery options. For the base Prius Two, a 1.2-kilowatt-hour battery pack uses the old, proven nickel-metal-hydride cell chemistry.

In every other model, however, a 0.75-kWh lithium-ion pack--far more compact and lighter--provides the same power output and degree of hybridization.

The difference in pack capacities, as a Prius engineer explained, was because the older nickel-metal-hydride battery operates in a very narrow charge band, while the lithium-ion pack can use considerably more of its state-of-charge range.

The new rear suspension is designed to allow an electric motor to power the rear wheels as well--in what Toyota calls e-All-Wheel-Drive.

Executives on the U.S. drive said they didn't see a demand for an AWD Prius in this country, so for now, that system remains available only in Japan--although several reporters from the wintry Northeast questioned that assertion.

As for the powertrain, it's broadly similar to previous Priuses, but both the 1.8-liter four-cylinder Atkinson Cycle engine and the latest iteration of the two-motor Hybrid Synergy Drive system are lighter and more efficient.

The combined output of the engine and motors is 121 horsepower, but Toyota made a point of saying that because it is now using a specific Japanese rating standard for combined power, that can't be directly compared to the 134 hp of the last generation.

From the driver's seat, what's most noticeable is that the car continues to start on electric power and then switch on its engine--but those transitions are quieter and better muted than in previous models.

The latest Prius isn't at 2016 Chevrolet Volt levels of engine isolation, but it's a lot closer than before, and there were times when we had to concentrate to notice that the engine had switched on.

The anguished, desperate howling of the old engine is now more of a loud whirr, and it feels more remote--indicative of a lot of work on noise reduction and suppression.

We observed electric operation to about 20 miles per hour, but also noticed that the car could switch into all-electric running as high as 45 mph under certain circumstances.

And the less-obvious transitions between the two modes made it all the easier to drive the 2016 Prius like a regular vehicle.

With gasoline at $2 a gallon in some parts of the U.S., the main selling proposition for the old Prius has been adjusted: Now, you have to make fewer compromises, it's a nicer car ... and, by the way, you still get that 50 mpg.

Whether Toyota can attract new buyers beyond today's Prius owners is debatable. Frankly, we're not sure the styling helps that cause.

But once you're behind the wheel, the latest Prius lets you have it all: High fuel economy and a normal driving experience, in a quieter and more pleasant cabin with better seats.

We'd call that a win-win.

Now, we're waiting to learn more about the 2017 Toyota Prius Plug-In Hybrid--which will likely be revealed within the next six months, and go on sale by the end of next year.