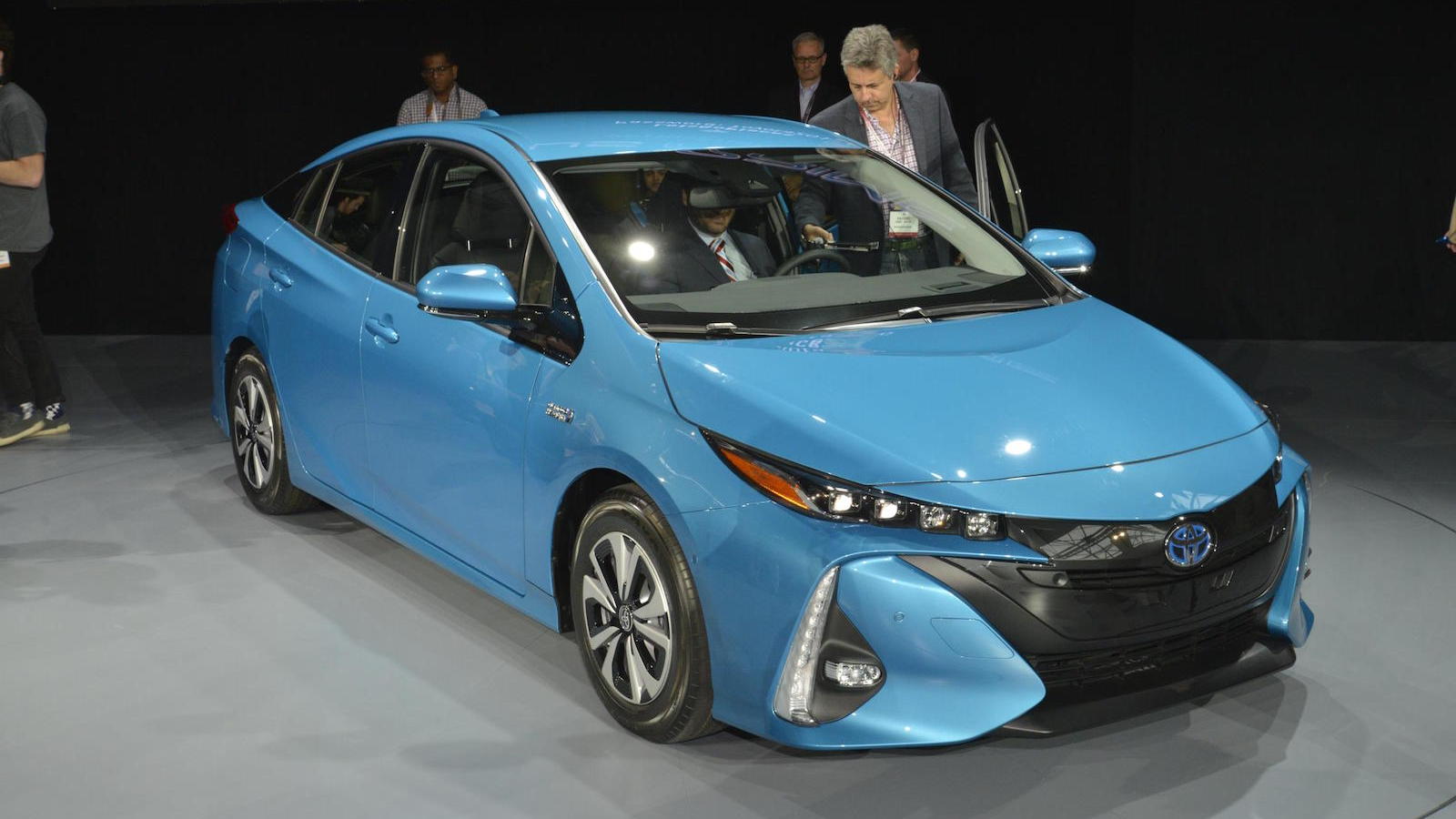 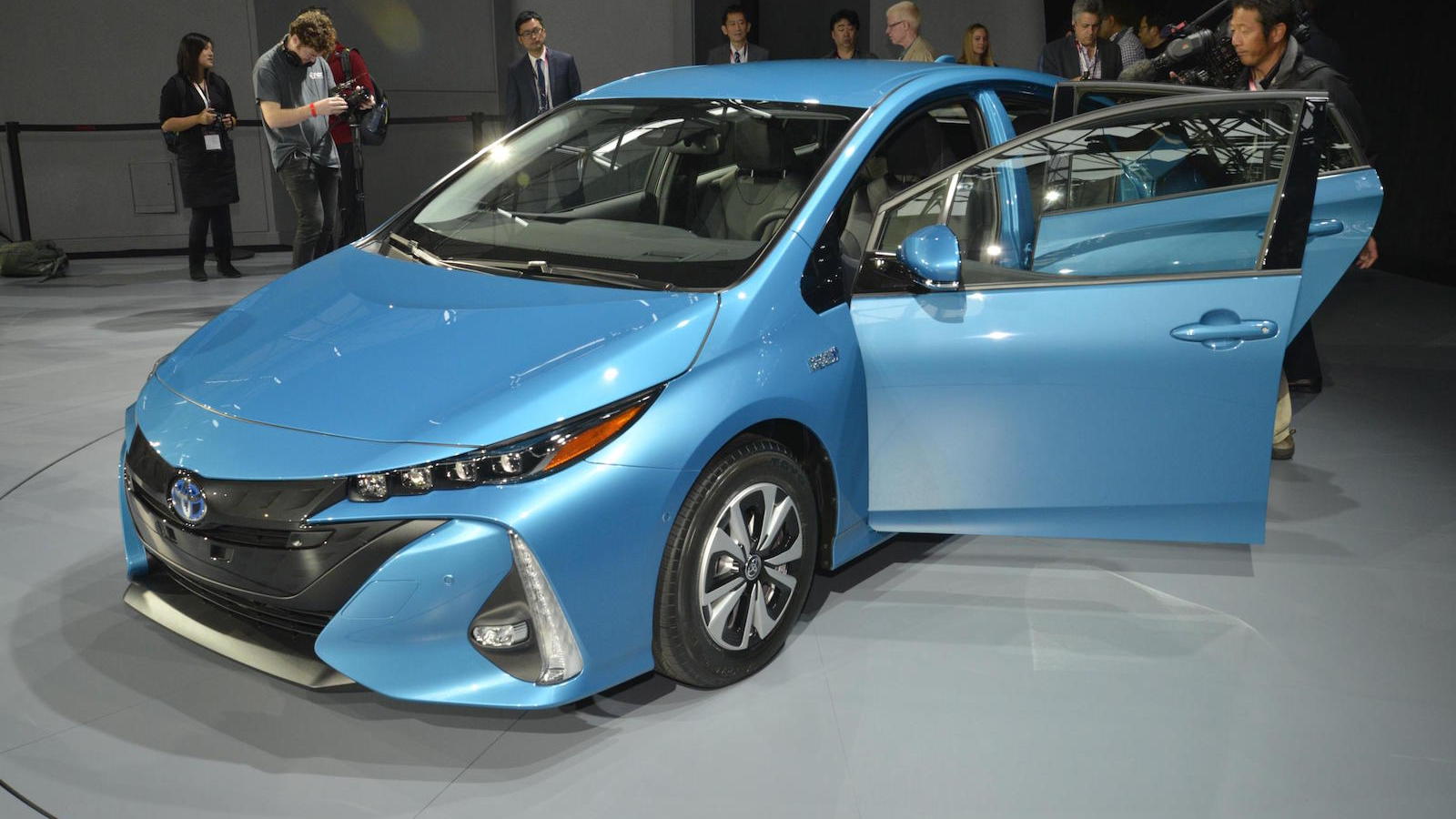 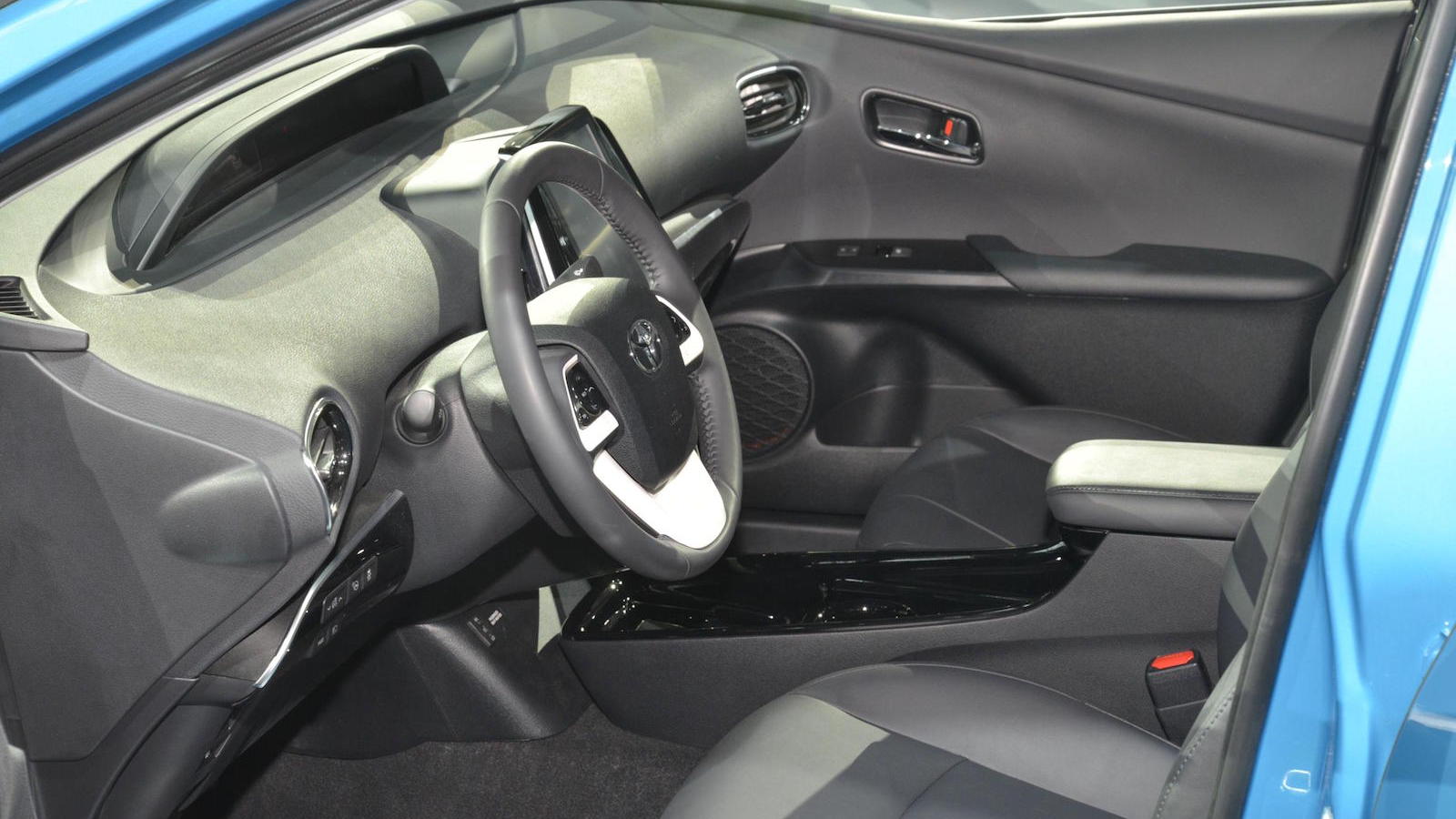 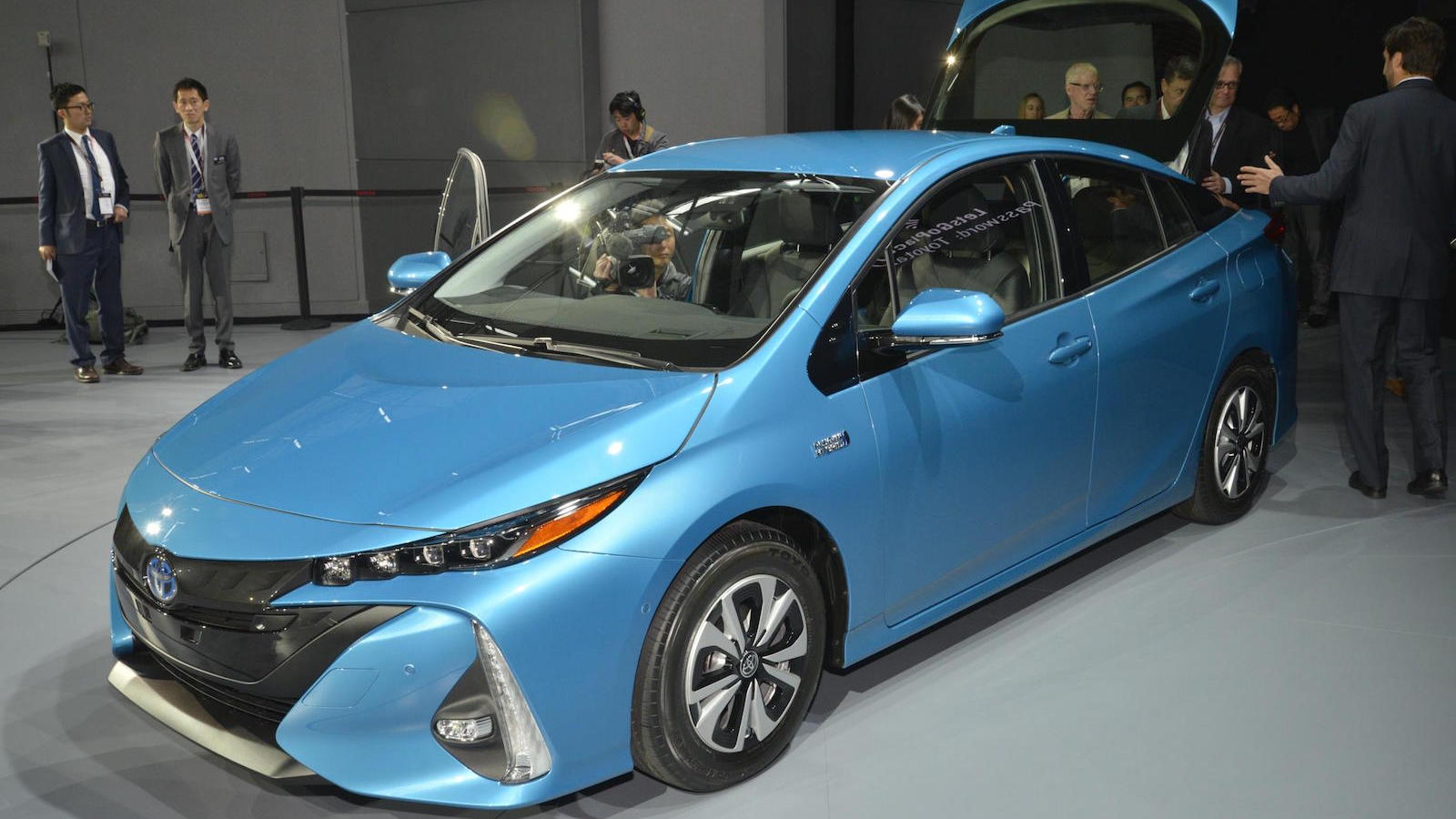 The 2017 Toyota Prius Prime replaces the Prius Plug-In, and it directly addresses nearly everything that current owners of that model have wanted.

It even has one driving detail that will please plug-in enthusiasts right off the bat: The Prius Prime will, in its EV Mode, entirely lock in electric operation—even when you floor the accelerator.

At the New York Auto Show, we briefly caught up with Prius Prime chief engineer Koji Toyoshima to find out more about how the Prius Prime does this, what else differentiates the Prime from the rest, and where this technology might be headed.

In all-electric mode, the second generator motor is allowed to play the role of a supplemental traction motor.

A special one-way sprag clutch allows this differentiation between modes, letting it team up with the traction motor during EV-only operation, and restoring it to its normal Hybrid Synergy Drive role when the battery’s charge is exhausted. 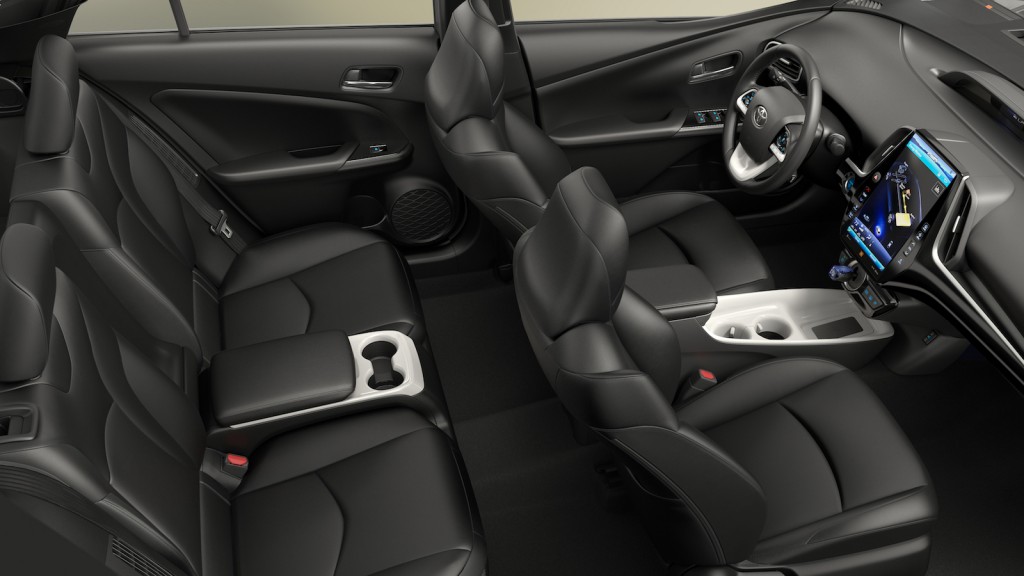 “Visually, it would be hard to distinguish, but the transaxle has changed,” said Toyoshima, through a translator. Elaborating, the chief engineer noted that outside of that new motor and clutch, some components of the planetary-gear torque-split arrangement have been reengineered and strengthened.

In EV mode, there’s now a higher maximum output from the electric motor system in EV operation.** That’s allowed Toyota to raise the maximum all-electric speed from 62 mph to 84 mph, say that performance is nearly as strong in electric mode, and quell concerns with the previous car that it wouldn’t have enough torque for safety if the gasoline engine were entirely kept out of the power flow.

ALSO SEE: Why Next Toyota Prius Plug-In Hybrid Is So Important: CA Laws

In the Prius Prime, the 8.8-kWh lithium-ion battery pack is positioned just under and slightly aft of the back seat.

The seat configuration is slightly different; because of a thinner, somewhat repositioned seat, the Prime has a four-passenger layout; but the seat is 60/40-split and does fold forward—to a floor that’s not flat, but certainly useful for expanding weekend-shopping capacity. 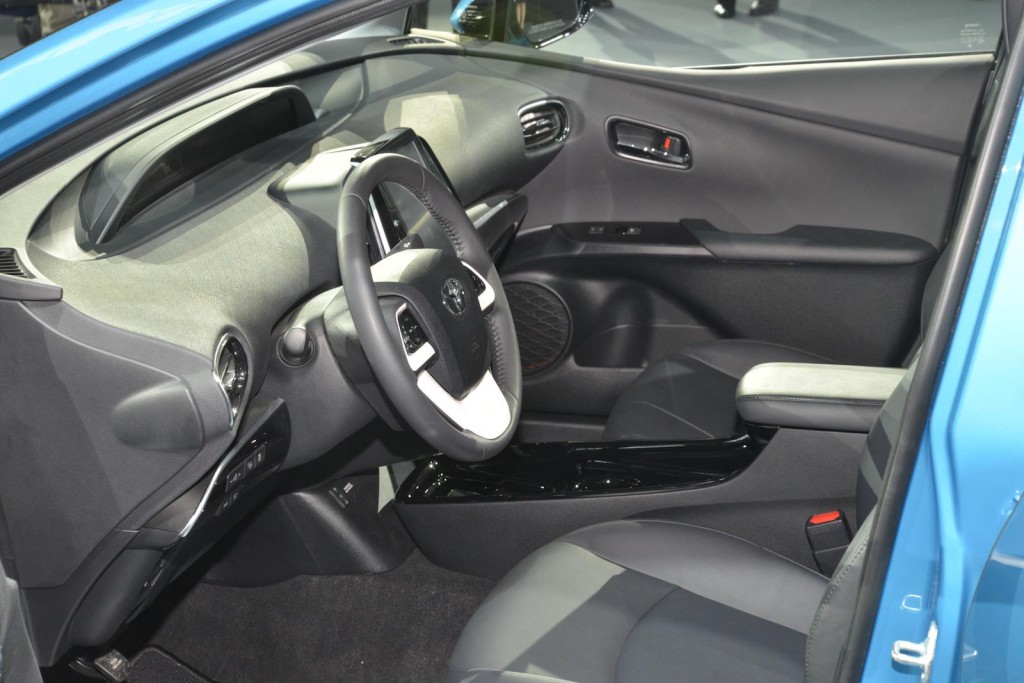 Stronger onboard charger, and a big-picture plan for plugging in

The outgoing Prius Plug-In came with an onboard charger rated at just 2.2 kW. To keep up with the demands of charging the larger pack, in about the same time as the previous one, Toyota has at last upgraded to a 3.3-kW one, which officials note allows it to be charged to full in about two hours; it can also be charged in virtually any household AC outlet in 5.5 hours or less.

The battery remains entirely air-cooled; there’s no liquid cooling of any sort. 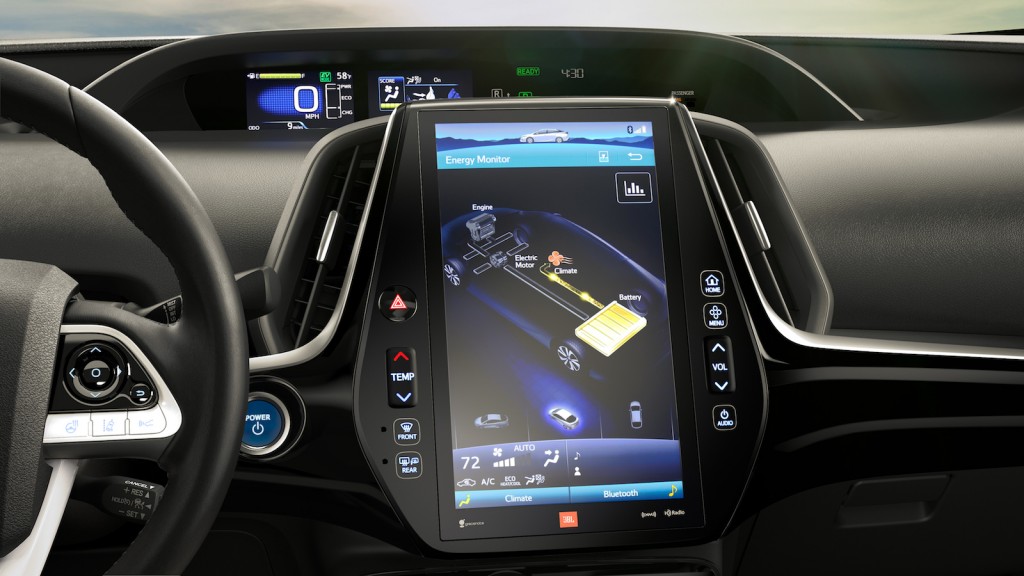 Toyota boasts that the Prius Prime can go more than 600 miles on a charge and a full tank; and it claims that its 120+ MPGe (final rating yet to come) efficiency rating will be the best of any plug-in hybrid.

It also suggests that the Prius Prime, with its 22-mile range, could get more than 50 percent of Americans to work and back home without using gasoline. With workplace charging that proportion goes up to 80 percent.

To that, Toyota has partnered with Chargepoint, with a set of Prius Prime Apps for charging and location-based services that will be tied into that public-charging network—although Toyota hasn’t yet announced the financial terms of the arrangement.

For now, what Plug-In owners wanted—but room to grow

For the most part, the Prime yields the doubled range that Prius Plug-In owners have requested—for years. Only it’s a bit overdue, and we’re approaching a time when around 30 miles (50 kilometers, as some regulation already dictates) is the new norm.

That could be on the way. At this point, a larger battery capacity would mean an even higher floor; although Toyoshima conceded that within a few years—perhaps at a mid-cycle for the model—increased power density could allow a new pack that might increase range without packaging sacrifices. 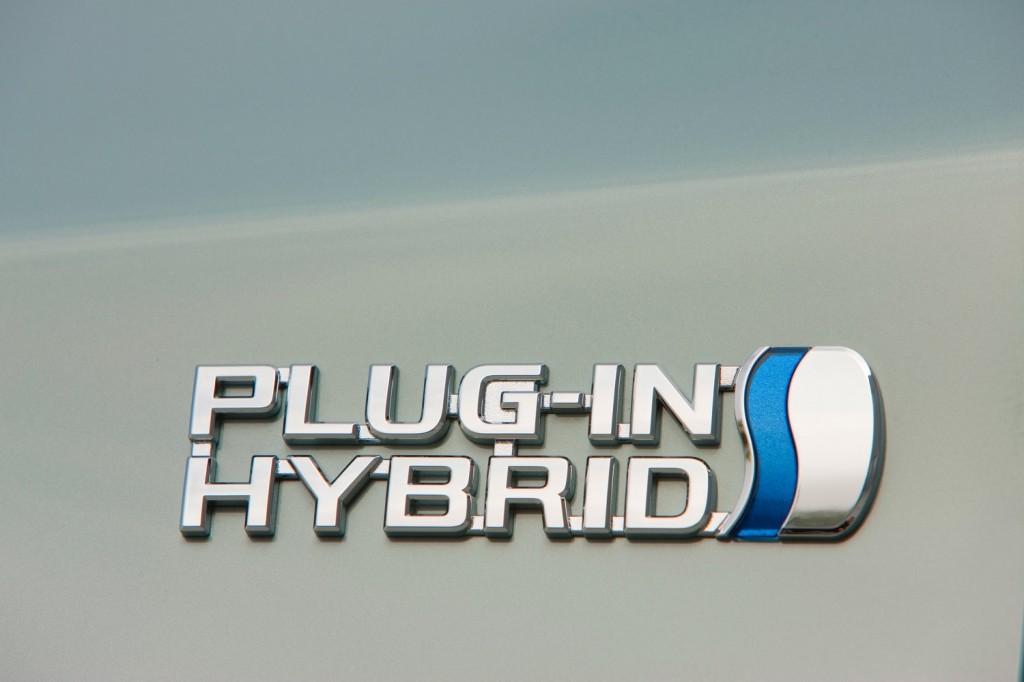 Toyoshima also confirmed that the modified “Prime” version of Hybrid Synergy Drive has been engineered for use across the entire portfolio of vehicles that use the automaker’s new modular TNGA architecture—slated to underpin nearly every front-wheel-drive-based sedan, hatchback, and crossover in the automaker’s lineup, from Yaris up to Avalon, within a few years.

Toyota plans to sell about 20,000 Prius Prime models in the U.S. annually, and it aims to sell the model in an expanded range of global vehicle markets. And yes, it would be a very safe bet that there are other Prime models on the way.

Keep up to date on all the latest photos and announcements by visiting our New York Auto Show news page.

**NOTE: This story was updated to reflect a translation error; there are indeed cooling fans for the battery pack. As for the unlikely 95-kW and 68-kW EV mode output figures quoted in the original version of this story, Toyota will neither confirmed nor deny them outside of our interview—but we expect official, extensive U.S. specs later this summer.