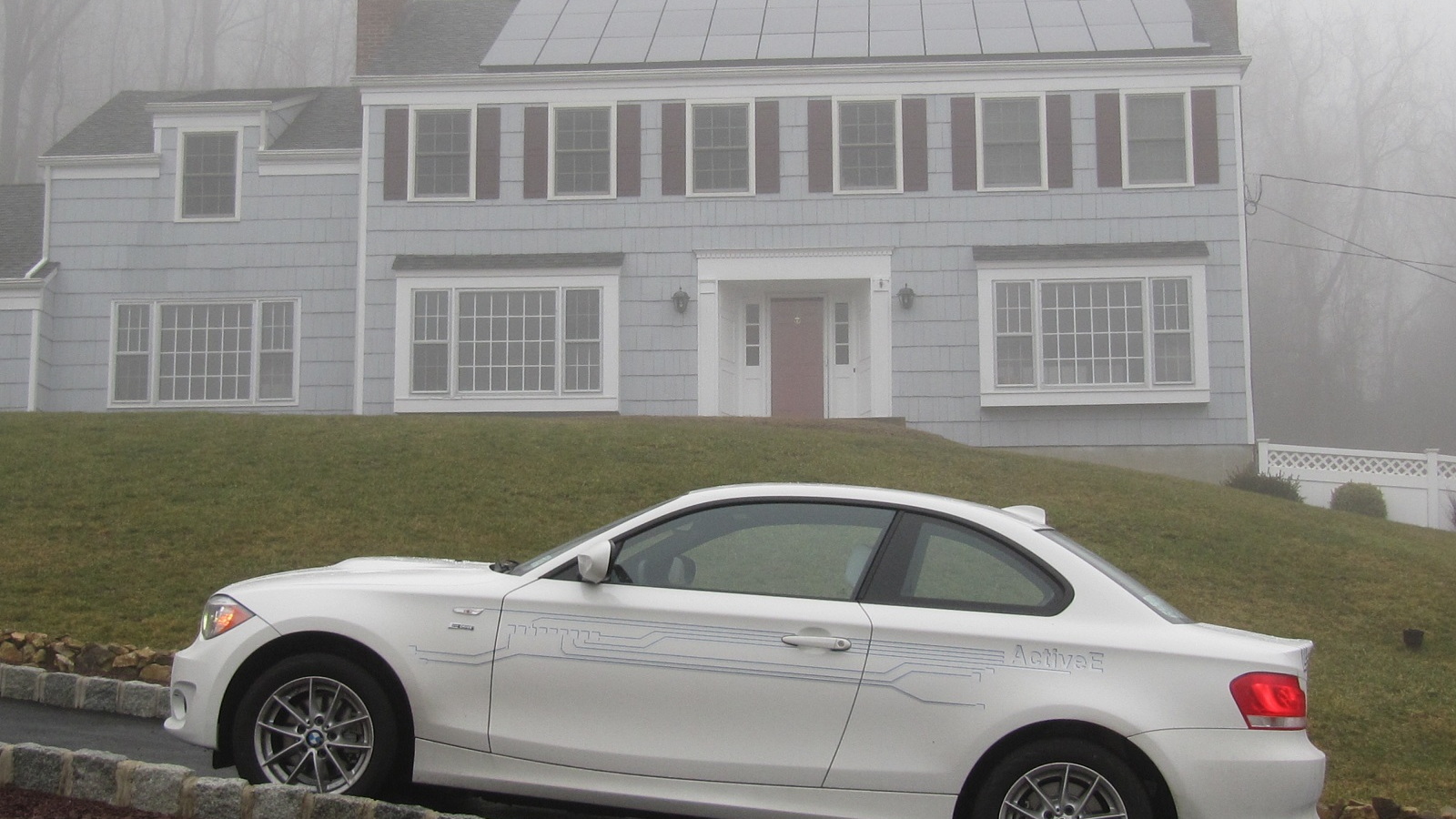 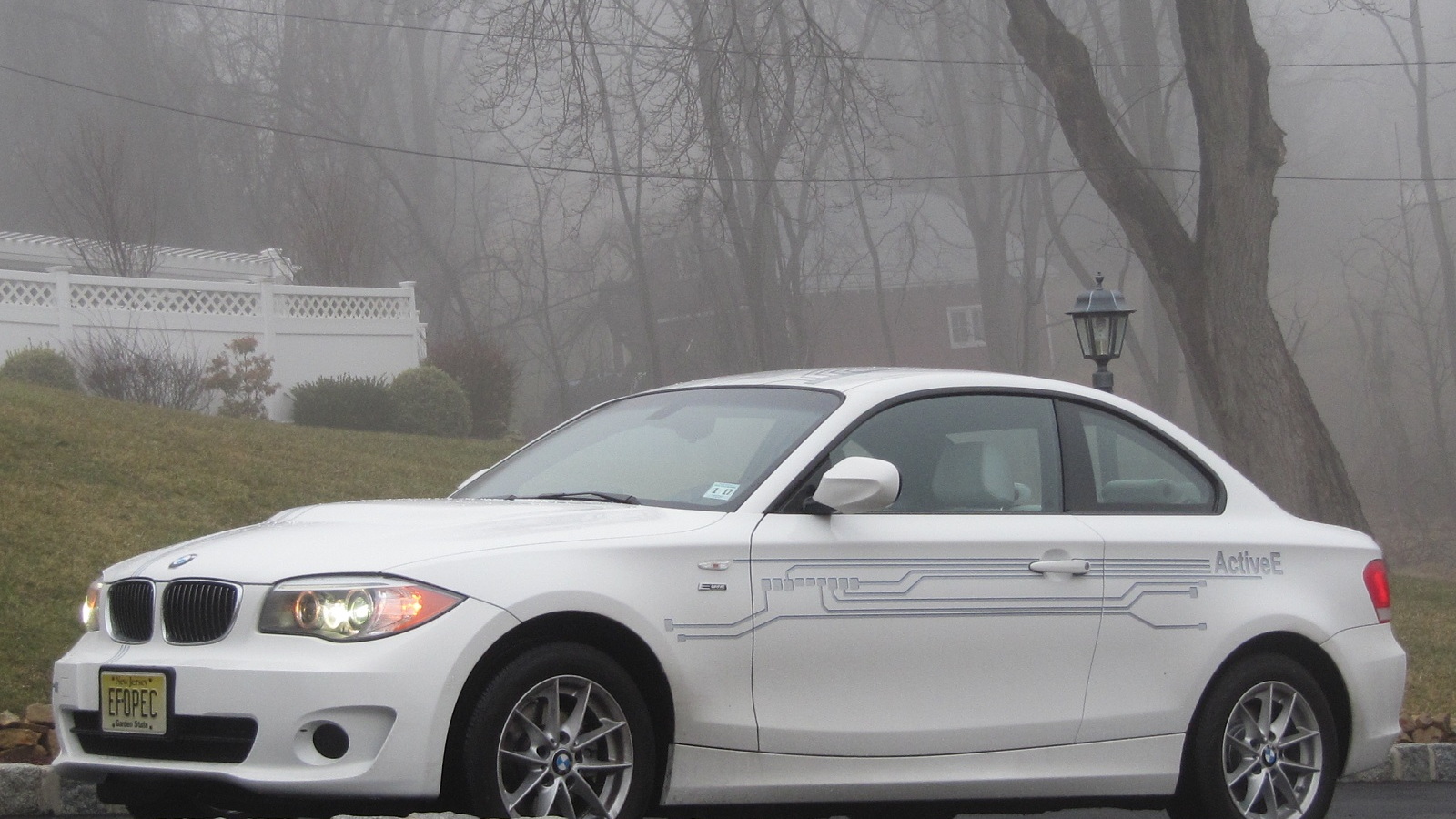 The first BMW ActiveE electric car in North America was just delivered last Friday. Now, with only 600 miles on that car, we've driven it.

It's solid, comfortable, performs well, and feels far more like a production car than its predecessor, the Mini E.

We're on record as calling the Mini E crude and unlikable. That didn't stop its drivers from raving about it, but the ActiveE is simply a far, far better car that we found much more enjoyable to drive.

Our drive came courtesy of electric-car advocate and restauranteur Tom Moloughney, who took delivery of that first ActiveE and spent the weekend getting familiar with it.

He calls it an "electric tank" and highlighted how much more solid and integrated it was than his departed Mini E, which he said was "pretty obviously a conversion."

Standard on the outside--and inside

From the outside, the BMW ActiveE looks like a standard white 2012 BMW 1-Series coupe, with the addition of a few graphics. The charging port is hidden behind the gas door on the right rear fender, and you might not look at it twice on the street.

From the inside, it's also pretty much standard 1-Series fare. The seats adjust manually, though the front seats are heated (to reduce use of the cabin heater to conserve electric range). And there's a nice, subtle smell to the leather upholstery that--we admit--adds a touch of luxury to this advanced vehicle.

The right-hand gauge in the instrument cluster, which would normally be a tachometer, is instead an energy meter, with the "Charge" portion at the left showing energy regeneration and the "eDrive" at the right showing power delivered from the battery to the motor.

Most importantly, the BMW ActiveE has four seats and a lockable trunk, with sections of the 32-kilowatt-hour lithium-ion battery pack located in the tunnel, under the rear seat, and replacing the gas tank.

The 125-kilowatt (168-horsepower) electric motor powers the rear wheels, and the performance is good both in normal mode and when the "EcoPro" button is pushed to conserve energy.

Most plug-in and hybrid cars we drive are pretty unpleasant when "Eco" mode is switched on, but the BMW ActiveE isn't. The entire car feels somewhat heavier and more deliberate, and while power is reduced, the car is still fine in traffic.

Switch off the EcoPro mode, however, and it feels peppy, with that fat electric torque curve making it fun to drive in traffic. And this is the default mode; turning off the car takes it out of EcoPro, and the driver must re-select it.

We noticed a muted version of the same acceleration curve as in the Mini E: When you accelerate hard, the car gives you enough power to move away, but full power doesn't come on for a second or two.

It's not annoying, but it's not quite Tesla Roadster-like. That's not really a fair comparison; the ActiveE is a 4000-pound vehicle (almost twice the Roadster's weight) with a battery pack of just 60 percent the energy capacity and an electric motor with one third less power.

Like the Tesla, however, the ActiveE is easy to drive on a single pedal. The regenerative braking is relatively aggressive, but very well modulated, and it takes only a few minutes to learn just when to lift off so the car comes to rest just behind the car in front at a stoplight.

If the needle in the energy meter is exactly vertical in the "Ready" position while underway, the car is gliding, using an accelerator position drivers learn to find when they want momentum to carry the car as far as possible without the slowing effects of regeneration.

The ActiveE is definitely more fun to drive than the Nissan Leaf, which we found very competent but ever so slightly appliance-like.

BMW has done a good job in reinforcing the 1-Series body and re-tuning its suspension and handling to cope with a very different arrangement of mass and power delivery than in the gasoline versions. The added weight reduces the litheness of the original, but the car has a low center of gravity and corners tight and flat.

Your range will vary

Owner Tom Moloughney appreciates the many user-settable information displays and vehicle settings that are accessed through the BMW iDrive controller on the console.

He's still getting used to using it, but he's already set a speed alert at 75 mph--so he doesn't waste energy by letting the car creep up over 80 mph--and set his battery state-of-charge and temperature readings as the main screen.

The thermal management of the battery pack--in layman's terms, that means liquid cooling and heating--gives the BMW ActiveE more consistent range performance, though like any electric car, it suffers in the cold.

The EPA rates the ActiveE's range at 94 miles (against the 74-mile rating for a Nissan Leaf), which reflects its relatively large 32-kWh battery pack. The Leaf has just 24 kWh.

We tested the ActiveE on a January day in the high 30s (that's about 3 degrees C for non-U.S. residents) and with a fully charged pack, the car suggested a range of 72 miles in Normal mode and 98 miles using EcoPro.

We did the bulk of our 67-mile trip from Montclair to Chester, New Jersey, and back again in EcoPro, reverting to Normal for several acceleration and handling tests.

That trip, including a number of hilly roads and a few brief spurts of acceleration, used 88 percent of the battery capacity, for a real-world usage of 2.7 miles/kWh--not the best efficiency we've experienced.

Moloughney said he's eager to test out the car's range in warmer weather, and he suspects that with careful driving in spring temperatures, he'll be able to get more than 100 miles on a full recharge.

Moloughney noted that in an early test of a completely depleted battery, he got only about 1 mile of additional range once the car's remaining-range indicator dropped to 0. BMW had estimated a margin of about 5 or 6 miles, he said, though he noted he did his tests on a day when the temperature was just 18 degrees F.

After that, the ActiveE barely crawled until he was able to recharge enough to get him back to his house.

In the Mini E, by contrast, he said he knew he had a safety margin of 10 to 18 more miles.

The one drawback to the EcoPro mode proved to be anemic seat heaters--they were nice and toasty in Normal mode--and occasional fogging of the glass.

Cabin heating and ventilation are major energy draws in any car with a high-voltage battery, so the "Eco" setting usually dials down those accessories a lot. Moloughney would prefer that the cabin heating be dialed down more, but the seat heaters retained at a higher power.

Brief blasts with the fan cleared up the misting, and the car's good insulation mean that it stays warm once the car was pre-conditioned while plugged in or the occupants had warmed up.

Moloughney also noted his irritation that the car cannot be set to pre-condition the cabin at the same time each day. The smartphone app only gives him access to a 24-hour window, with no recurring setting mode.

One awkward moment on our test underscored the car's developmental nature: Using both friction and regenerative brakes in two-pedal driving coming uphill to a stoplight, the car simply shut down, with a message on the display saying it had a powertrain problem.

It rebooted itself and behaved fine thereafter, but Moloughney plans to seek an explanation from BMW about what happened. It is, he admits cheerfully, part of his role as a test driver for this new technology--or, as BMW calls them, an "electronaut."

The ActiveE fleet of 600 cars in North America will be tested for two years, leading up to an expected September 2013 launch of the company's ground-breaking BMW i3 electric minicar