Last week, BMW proudly announced that Peter Trepp, of Pacific Palisades, California, had become the first person in the United States to take delivery of an all-electric Mini E.

Not ready for primetime

Ten days ago, we had a chance to drive a Mini E. Rarely have we been in a car less ready for primetime than this electric conversion of that fun, peppy, cheerful rollerskate,  the 2009 Mini Cooper S. 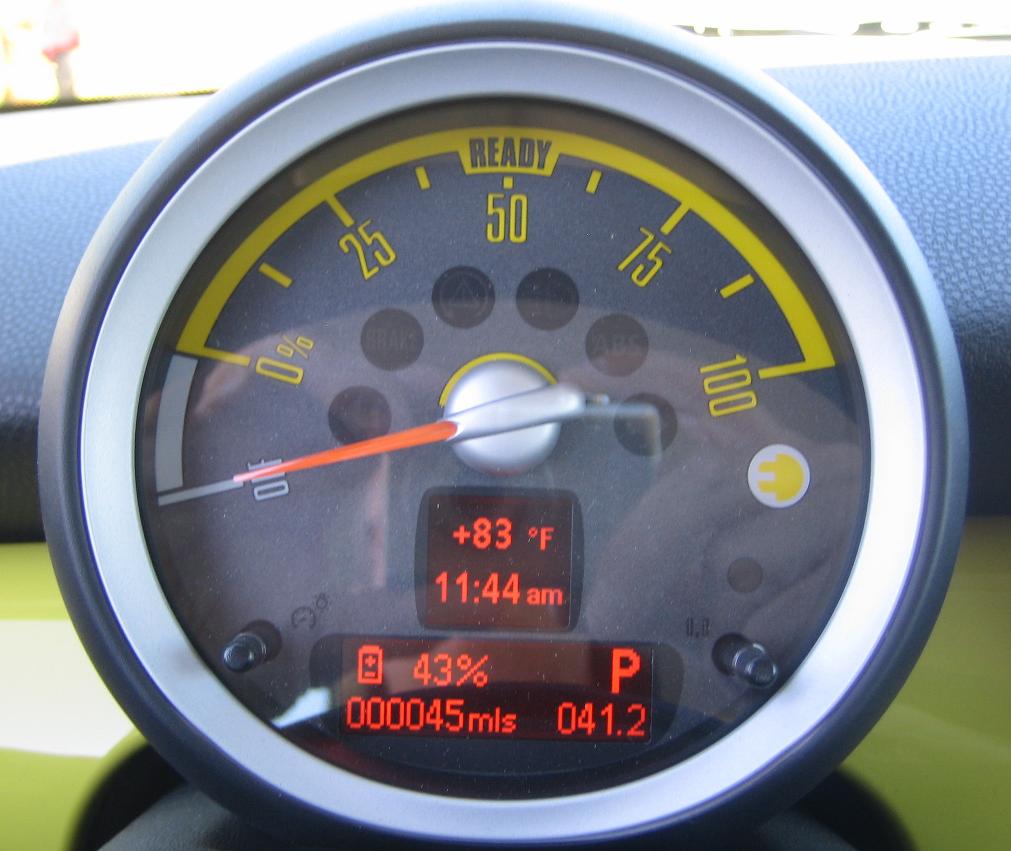 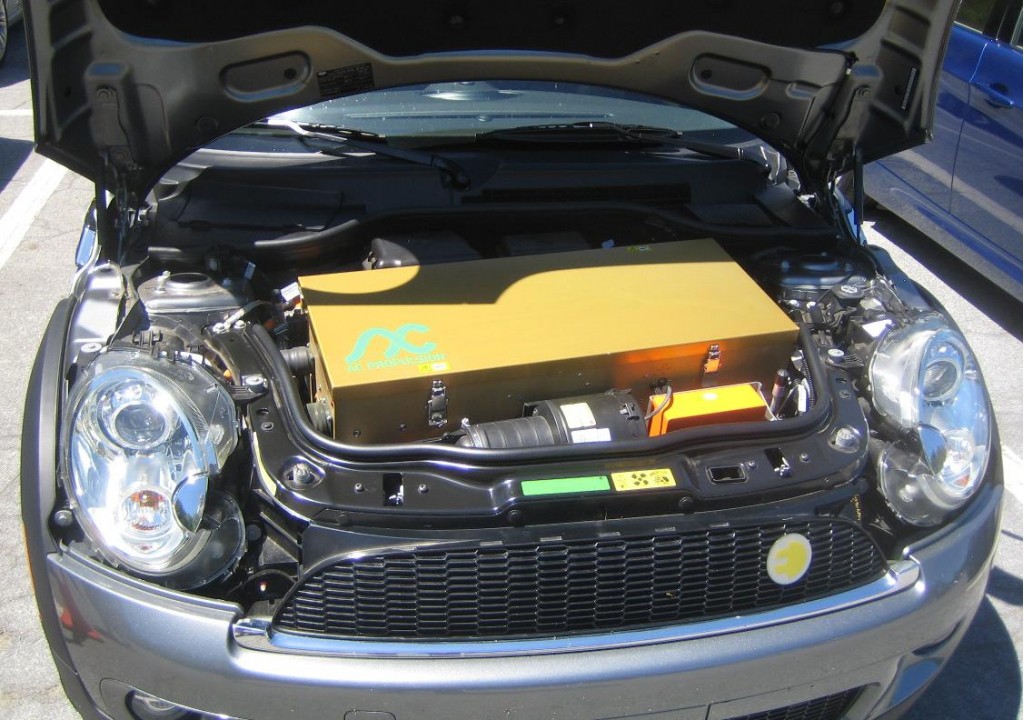 Mini E electric vehicle - nope, no engine in there 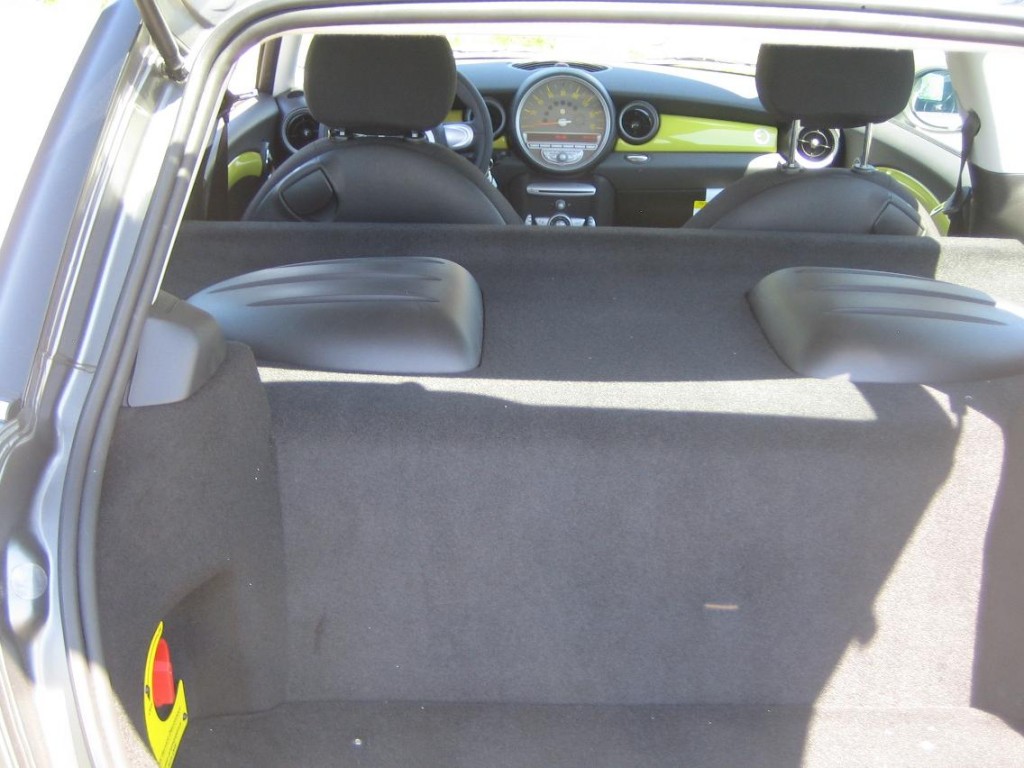 Granted, these cars aren't for sale. They're prototype test vehicles, to gauge consumer reaction and give BMW some knowledge about how real drivers actually use electric cars day to day in the real world. BMW is issuing only 500 of them, on one-year leases.

But one of BMW's stated goals was to "preserve the Mini experience" in an EV. If the Mini were many hundreds of pounds heavier, suffered a distinct rear weight bias, rear-wheel-drive, and had the deceleration braking of a semi with the Jake Brake on ... yeah, maybe.

We've now driven prototype EVs from many makers: a 2011 Chevrolet Volt mule, the 2012 Nissan EV prototype, the 2012 Ford Focus EV prototype. In every case they were better behaved, more pleasant behind the wheel, and far more refined than the Mini E.

And that goes double for the only production electric vehicle currently sold in the US, the 2009 Tesla Roadster. We were lucky enough to road-test that car, and it's a rolling sales pitch for the virtues of electric drive. The Mini E may be its polar opposite.

Regen: So strong it throws you forward

Where to start? Perhaps with the regenerative braking, which replaces engine braking and slows the car while recharging the battery pack. In the Mini E, on lift-off, it took half a second to kick in--and then came on so strong it threw us forward in our seatbelts.

Time and again, until we ruthlessly trained ourself to feather the trottle and never to lift off abruptly, we could accelerate smoothly but lurched into every slowdown.

A further oddity was the slight delay before full acceleration. Electric vehicles are fun to drive precisely because an electric motor develops maximum torque from 0 rpm.

But the Mini E almost felt like it had turbo lag, with the characteristic EV rush of power coming only after half a second or so. Granted, it did have enough power that we could spin the inside wheel when accelerating out of a turn.

Engineers who design hybrids and electric cars will tell you it's exceptionally tough to program the software that blends power on and off and integrates the regenerative braking.

The Tesla Roadster was easy to drive on just one pedal; its regen seemed to come in at just the right time, and it took all of two minutes to learn. The Volt, the Focus EV, the Nissan EV, all of them were predictable and easy to drive, so much so that it was easy to forget we were driving an EV at all.

With the Mini E, it's impossible to forget. The entire feeling reinforces the notion that This Car Is Very Different From What It Used To Be.

We fear that the EV wizards at AC Propulsion of San Dimas, California, who developed the Mini E powertrain for BMW, are no longer at the top of their game. They were once some of the best in the business, but we were startled how clunky the Mini E really was.

[UPDATE: We received the following comment from Tom Gage at AC Propulsion, which offers a possible explanation for the car we drove:

The vehicle you drove may have been one or two iterations behind in its software. The most current software we have from BMW in our MINI Es reduces the lag. For the record, the responses to accelerator inputs are programmed into the vehicle control computer by BMW. Don't blame AC Propulsion.]

To give BMW its due, the interior amenities of the Mini E are beautifully done. It has the usual power windows and locks, full heating and air-conditioning, and so forth.

The instruments comprise the characteristic Mini huge central speedometer, along with a battery-charge gauge directly in front of the driver and visible through the steering wheel.

This has the unintended effect of focusing attention on every percent of charge that's lost. We think Tesla struck the right balance; the state-of-charge bar gauge is visible, but it's above the driver's left knee, so it's not front and center.

As for Mr. Trepp, BMW describes him as a "venture capitalist whose firm specializes in funding early-stage clean technology companies". He's the first of 450 drivers in the Los Angeles, New York, and New Jersey areas who will spend a year with a Mini E.

We very much hope the Mini E doesn't sour him on EVs altogether. He can do better, and within three years, he'll have several much more pleasant options to choose from. We hope that one of them will be an electric Mini.

But this one ain't it.