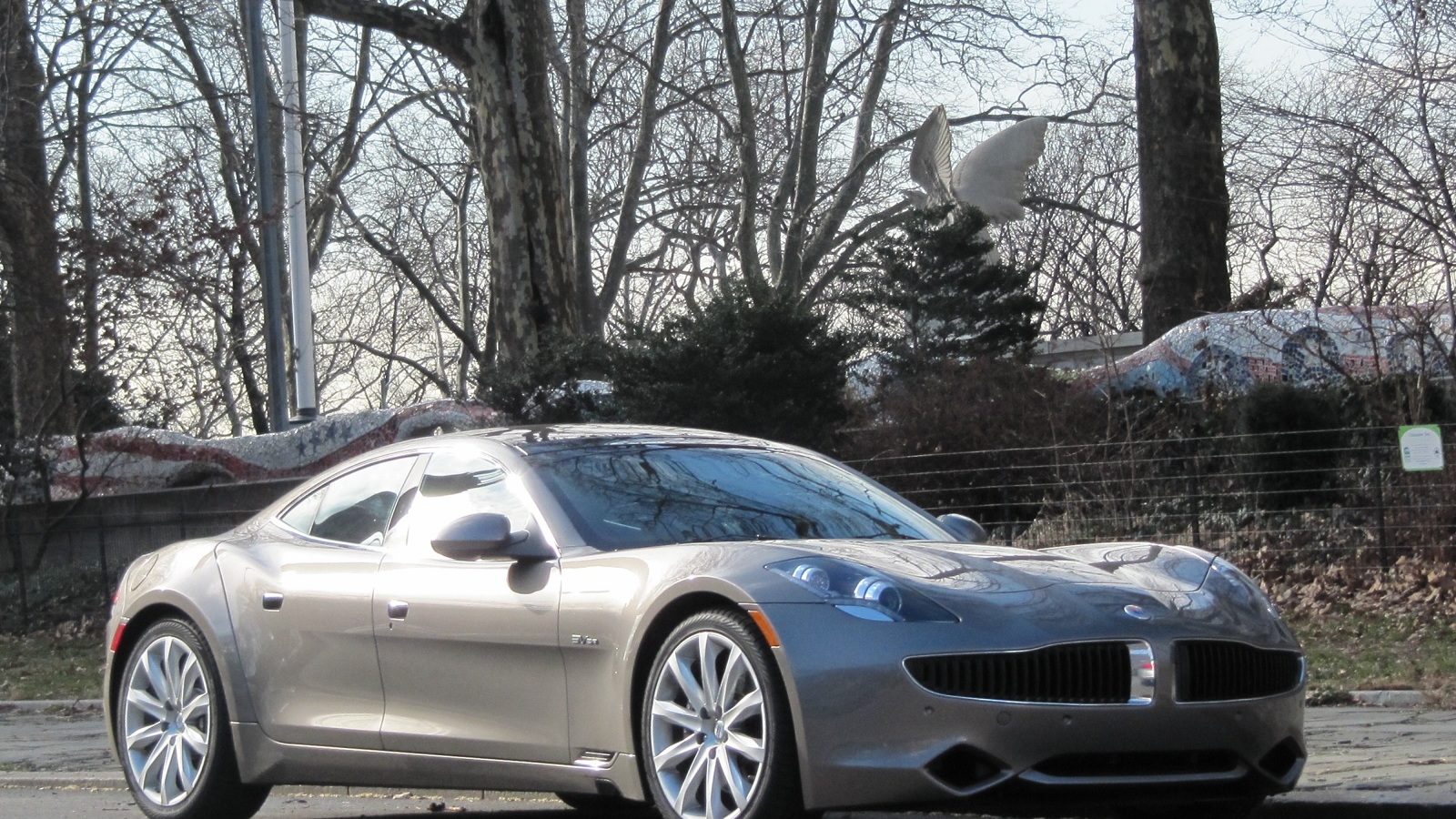 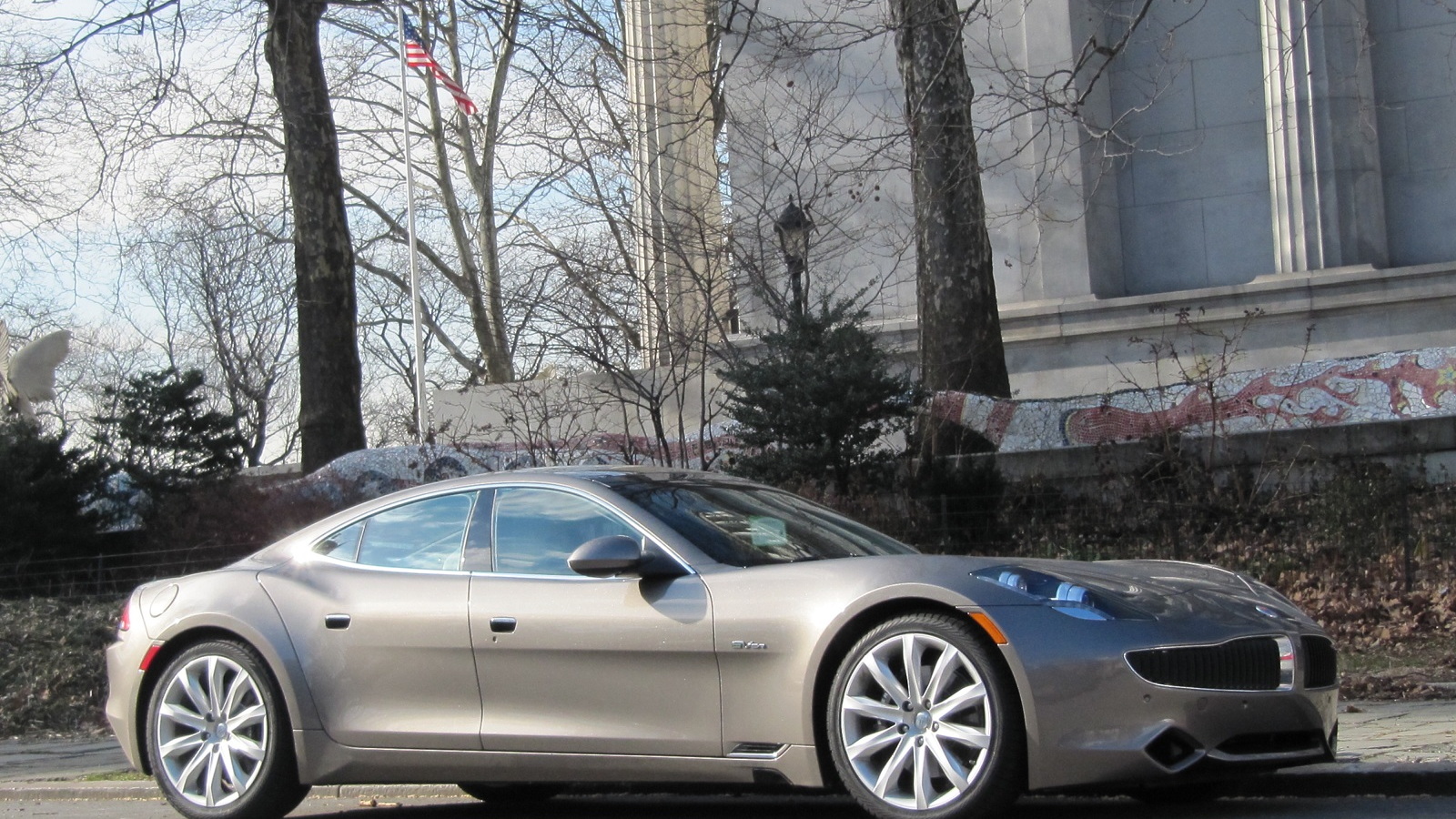 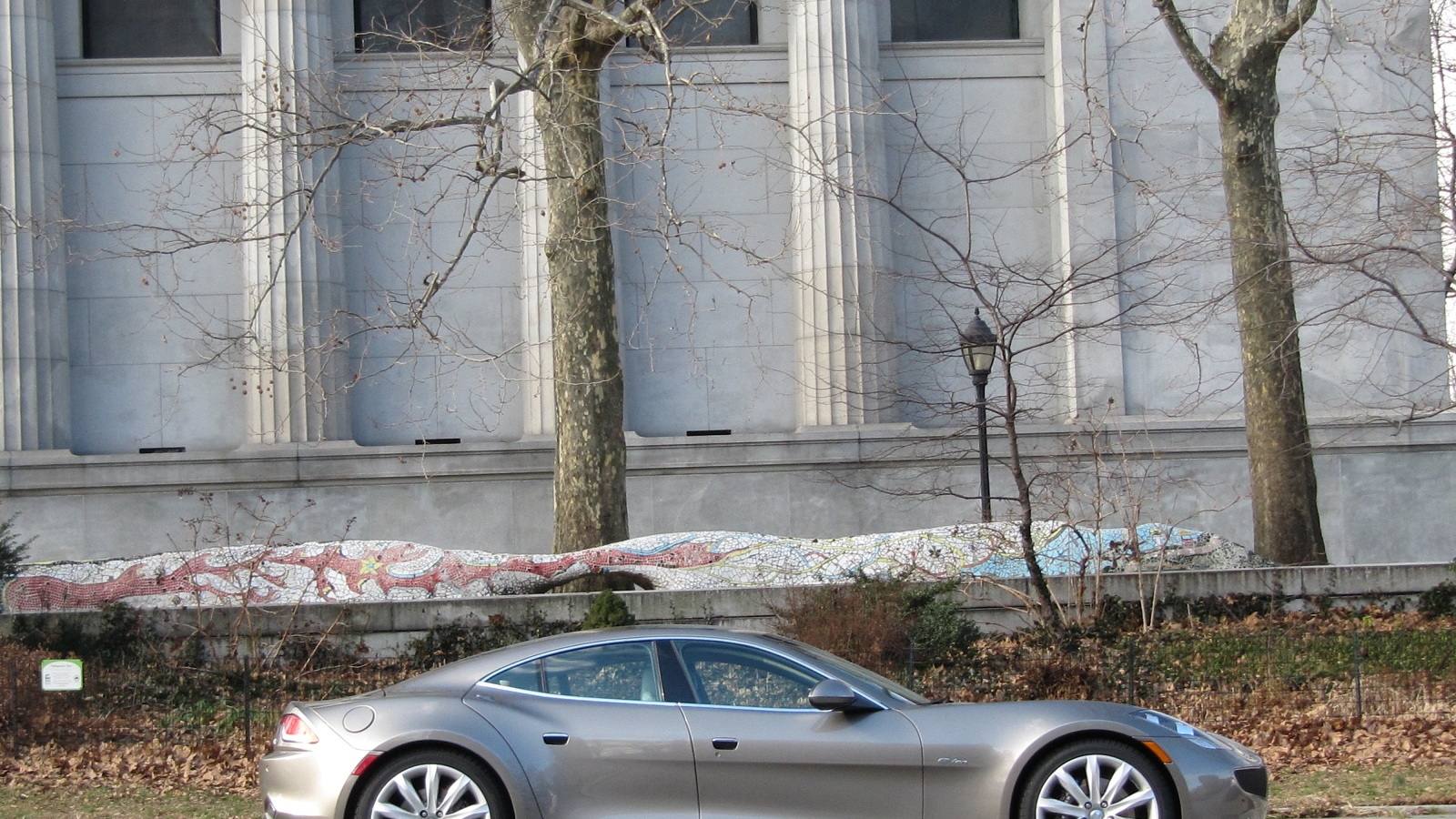 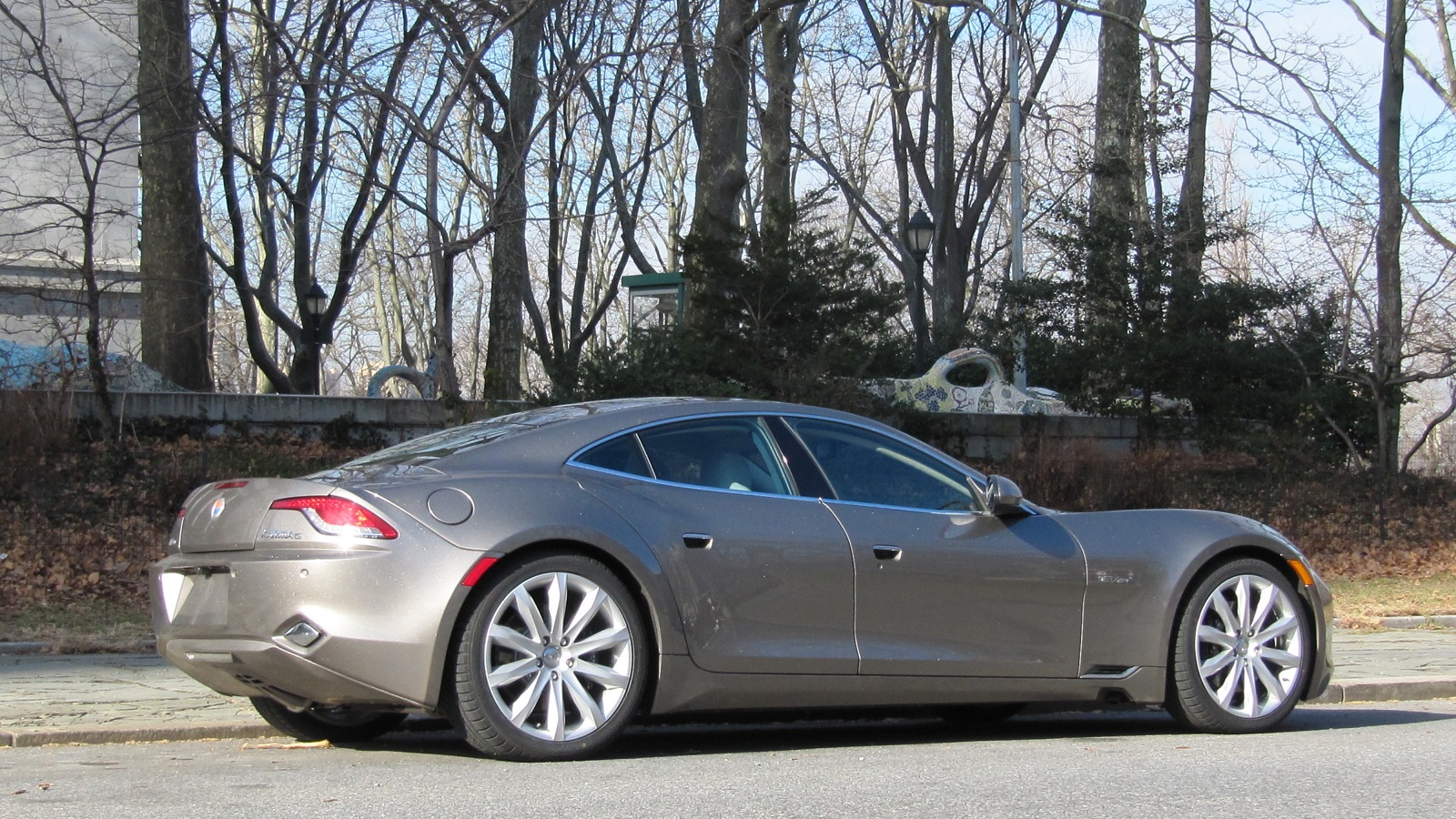 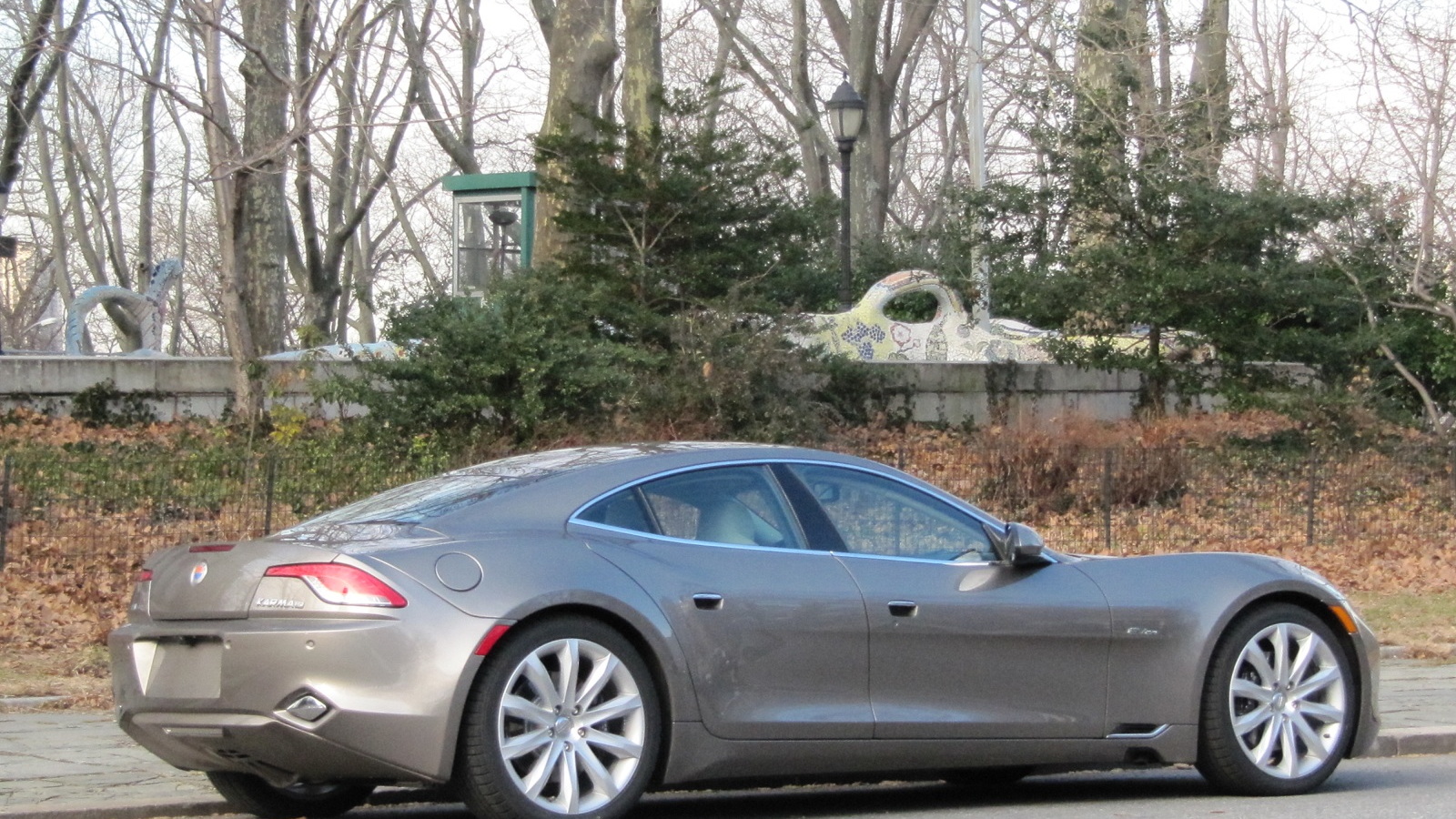 Well, after three years of asking, we've finally had a chance to drive the 2012 Fisker Karma.

And we can confirm that the extended-range electric luxury sport sedan is, in fact, a real car.

It's got drop-dead styling, unique interior furnishings, and a good ride that's aided by the fact that it's both low and very heavy.

In "Stealth" (all-electric) mode, performance is good but not breathtaking, with a stated 0-to-60-mph time of about 8 seconds and top speed limited to 90 mph. Acceleration is adequate, even uphill, and it's the most pleasant way to drive the Karma.

In "Sport" mode, which switches on the 2-liter range-extending gasoline engine to power a generator, the Karma is quicker and feels slightly more lithe.

And like the Chevrolet Volt, with its similar powertrain, the engine note lags (or "follows") the power demand from the Karma's pair of 150-kilowatt (200-hp) electric motors by a second or two.

Engine noise is fairly well isolated, and because the engine is not mechanically connected to the rest of the drivetrain, there's no vibration at all. Still, we preferred the all-electric mode, purely for its relative silence.

We didn't get much chance to wring out the Fisker's handling amidst Manhattan streets and a pair of 4-mile blasts up and down New York's West Side Highway, but it seemed to corner flat and predictably, with the bonus of a surprisingly tight turning circle.

The electric power steering has good road feel, and we felt no transition at all in the brake pedal between regeneration and friction braking--which is a hard trick to pull off in any company's first electrified vehicle.

Fisker says the 2012 Karma provides "up to 50 miles" of electric range, but the EPA rated its electric range at 32 miles. That seems more realistic to us, perhaps even optimistic.

Over a drive of 12 or 13 miles that blended stop-and-go New York traffic with highway speeds of 50 mph (the legal limit) and somewhat higher, we used an indicated 16 miles of range (from 20 miles to 4)--and perhaps one-third of those miles were covered in Sport mode, which shouldn't affect battery range.

In other words, 9 miles of Stealth driving used 80 percent of the car's indicated 20 miles of range--which showed as precisely half-full on the car's electric range meter, on a brisk 40-degree day.

But never mind all that: The 2012 Fisker Karma is simply a stunning design.

Whether parked, in traffic, or hurtling up the highway, it may be the lowest, sleekest, coolest-looking four-door sedan in the world. The photovoltaic solar cells embedded in the roof only add to the impression.

People turn and watch it. Doormen and bellhops run over to help its occupants dismount. Cops ask questions about it.

Even New York's notoriously discerning construction workers give it a thumbs-up.

And although it's low, the twin-mouth grilles in front seem to convey aggression. Twice we observed cars ahead move into the next lane as we approached from behind--which virtually never happens on New York City roads.

It's an effect we'd experienced only once before, in fact, while driving the world's only all-electric Rolls-Royce Phantom--a bluff, imposing car of immense presence that may have 10 times the frontal area of the Fisker Karma.

That's how remarkable the Fisker's lines are.

Getting into a 2012 Fisker Karma requires ducking under the low roofline and through a smallish door opening.

Once inside, though, the car is surprisingly spacious--for a car the EPA has declared to be a subcompact, anyhow.

The Karma is a car that you wear, not ride in. It fits like a well-tailored suit. That's a dreadful cliche, of course, but unfortunately it's the right way to describe the experience of sitting in the driver's seat.

The Karma is what the Brits might call "close-coupled," as we discovered when it proved necessary for the front passenger to shift rightward in order to open the center console.

As for the rear seats, this is a car for four adults--not five. Rear passengers are cocooned in comfortable, form-fitting seats, but they won't have a lot of room in which to squirm around, spread out, and put up their feet.

The 2012 Fisker Karma, in other words, is clearly a sport sedan, not a limousine.

Visibility to the front and sides is unexpectedly good, with ideally shaped door mirrors. Rearward and rear three-quarter vision is not.

The descending roofline, rising shoulder line, and slit-like rear window combine to make the Fisker a car where drivers should adopt the view that, "What's behind me is not important."

The EcoChic interior in the 2012 Karma we drove used textiles and glass, rather than leather, metal, and plastic, to convey an impression of luxury.

It's a unique approach. When was the last time you drove a car whose dashboard had a slightly velvety feel and a pattern that might almost have been used for upholstering a chair?

The most startling feature: magnolia-leaf patterns on the glass panels that give a view of the 20.1-kilowatt-hour lithium-ion battery pack in the tunnel and hold the armrest switches. Etched, we thought.

Putting the car in "gear" is a matter of pushing a small "D" button on the drive selector, shaped rather like a coffee-table ornament, on the console.

We checked the mirrors, pulled out into traffic, and found the Fisker in Stealth mode very quiet and otherwise quite conventional to drive. The engineers have programmed in the right amount of "idle creep," to simulate the familiar experience of an automatic transmission.

In general, the Fisker Karma was easier to drive in congested urban traffic than we had feared, given its lowness and the wide stance. More like a Jaguar XJ, say, and less like an exotic Italian two-seat supercar.

Two paddles sit behind the steering wheel. The left paddle toggles between Stealth mode (the default) and Sport mode, when better performance is needed. The right paddle controls settings for the regenerative braking.

The 2012 Fisker Karma defaults to a regeneration setting that's not very aggressive, giving a driving impression very much like that of a conventional automatic-transmission car. Lift off the accelerator, and it glides with little resistance.

The right paddle lets the driver opt for more regenerative braking (mode "1") or the most aggressive regeneration (mode "2"). It's Mode 2 that allows the so-called one-pedal driving pioneered by Tesla, in which letting up on the accelerator slows the car enough that the brake pedal is only needed to come to a complete stop.

So Fisker has neatly covered all bases: You can have a Karma sport sedan that drives just like a regular car, or you can easily set it up to drive on a single pedal, like the Tesla Roadster, the BMW ActiveE we tested two days ago, or other fully electric cars.

(You can also, by the way, set up a Chevrolet Volt to drive like a Tesla as well.)

One incident on our short drive underscored the teething troubles suffered by the first Fiskers to go on sale, which were recalled not once but twice for both software upgrades (each owner was to receive a personal call and apology from founder Henrik Fisker) and battery-pack safety modifications.

After taking the photos you see here at Grant's Tomb, we pulled out into traffic only to notice that the entire instrument cluster was dark. The display in the center stack was still working, but none of the digitally rendered gauges ahead of the driver were visible.

"We rely on our early customers to identify issues like this for us," said Fisker's Datz, cheerfully.

It's real, but what's it like to live with?

In the end, our short drive left us wanting to spend more time with the Fisker Karma. (For another take on the 2012 Fisker Karma, see our earlier drive report by colleague Joel Feder.)

We'd like to take it on a long trip, to see whether it gets better gas mileage in range-extending mode than the EPA's startlingly low 20-mpg rating. We know colleague Nelson Ireson would love to take a Karma onto the autocross track, to wring out its handling properly.

And we'd just like to live with it for a week or so, to see how it compares to other luxury sedans, to the many other plug-in vehicles we've driven, and to the needs of your average affluent early adopter (as best we can simulate those).

We'd also like to see how reliable the car is in daily use.

But it's far from every car we drive that leaves us wanting more. We're just as happy to send some of our test cars back to their distributors, and that definitely wasn't the case here.

We look forward to our first extended test of a Fisker Karma. When that will be, of course, is anyone's guess.

What do you think of the 2012 Fisker Karma? Leave us your thoughts in the Comments below.