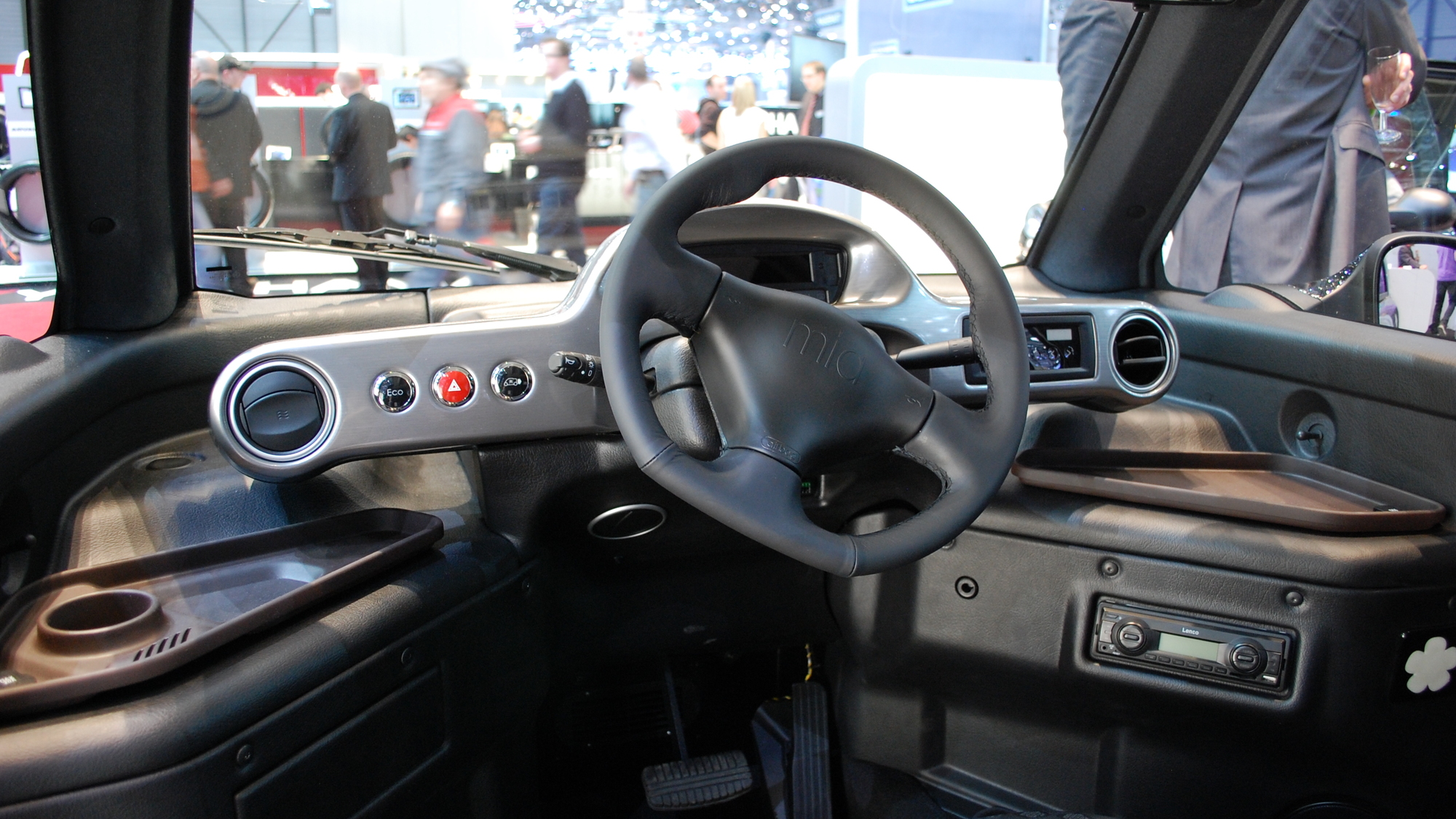 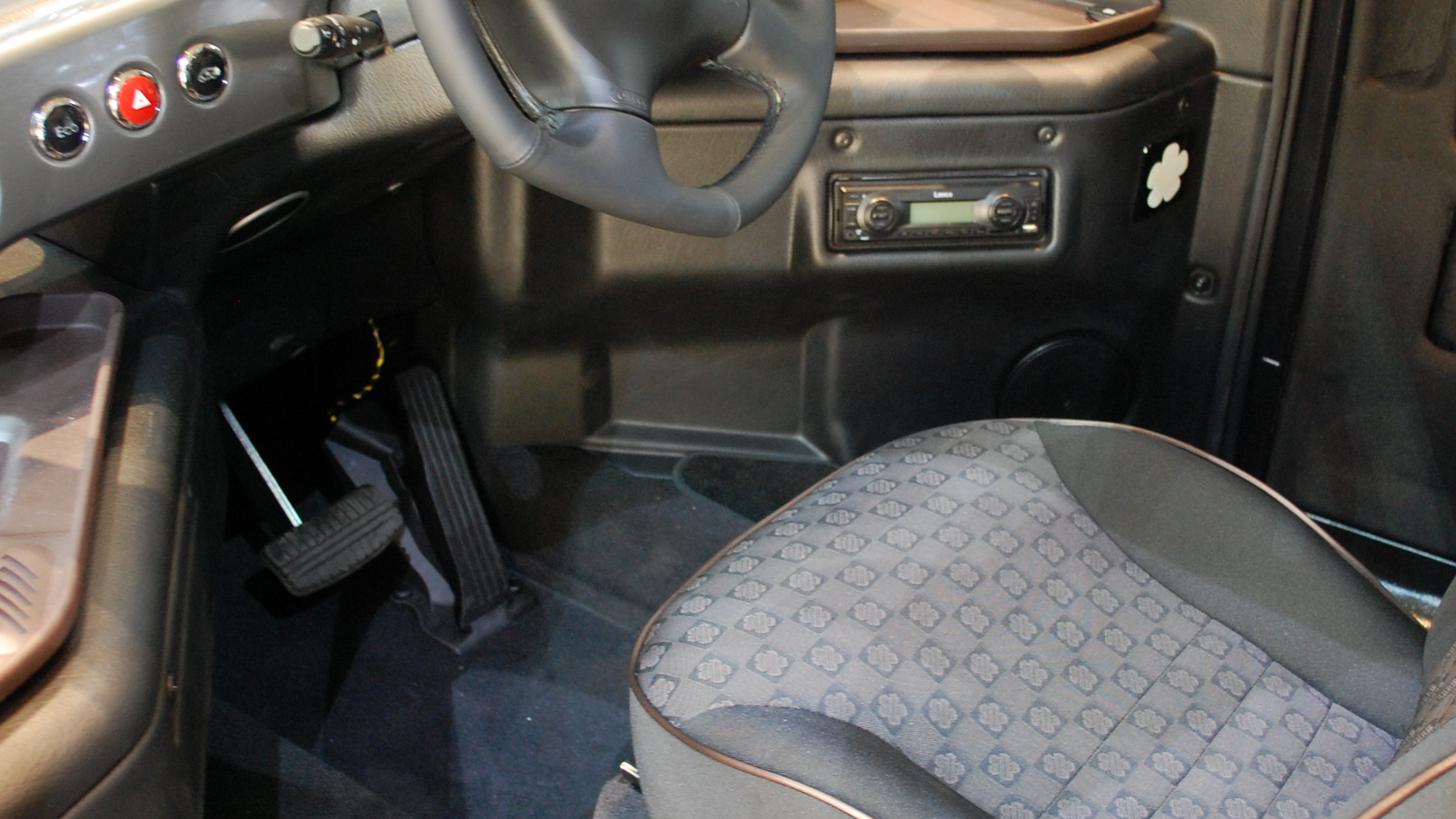 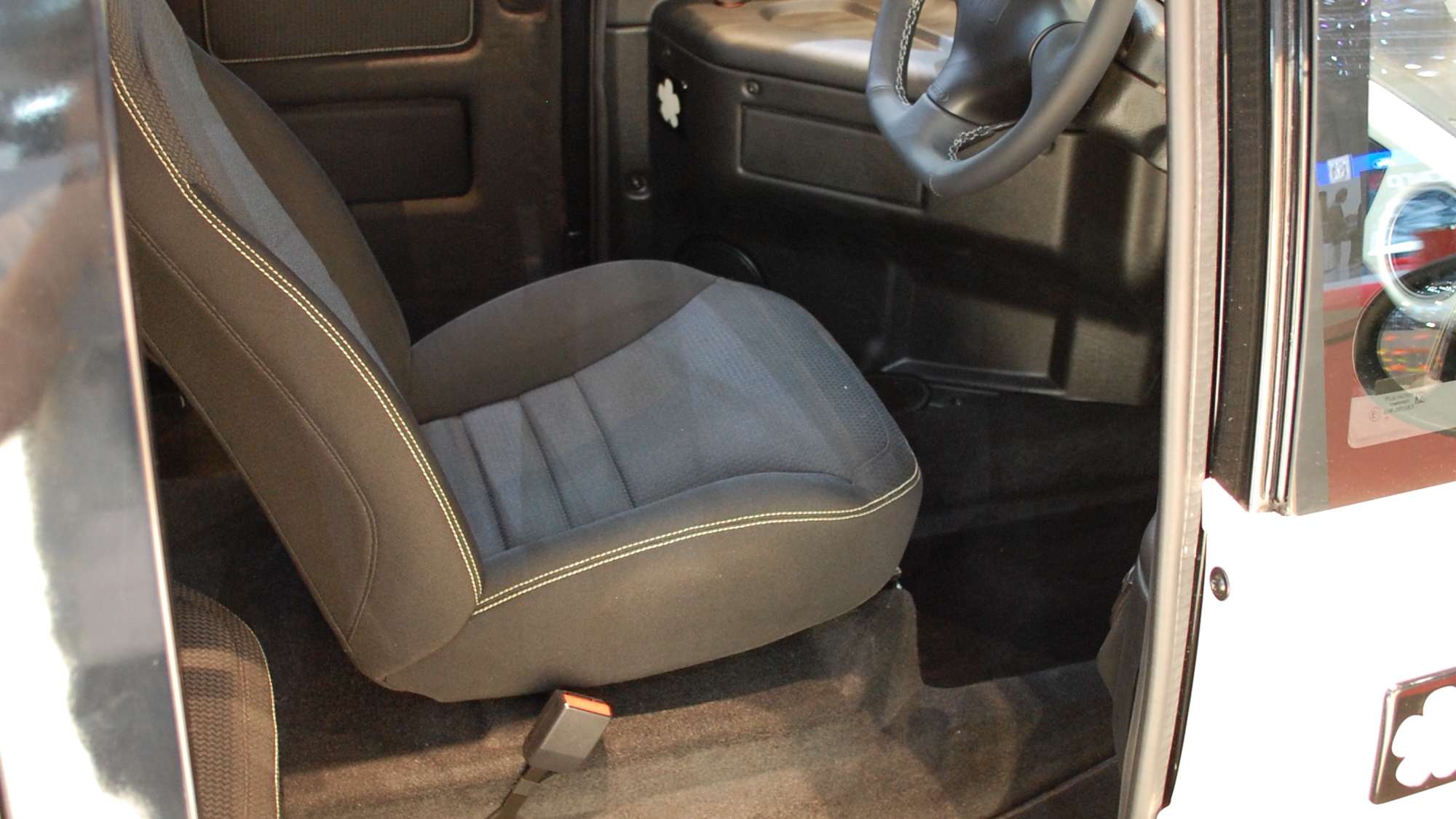 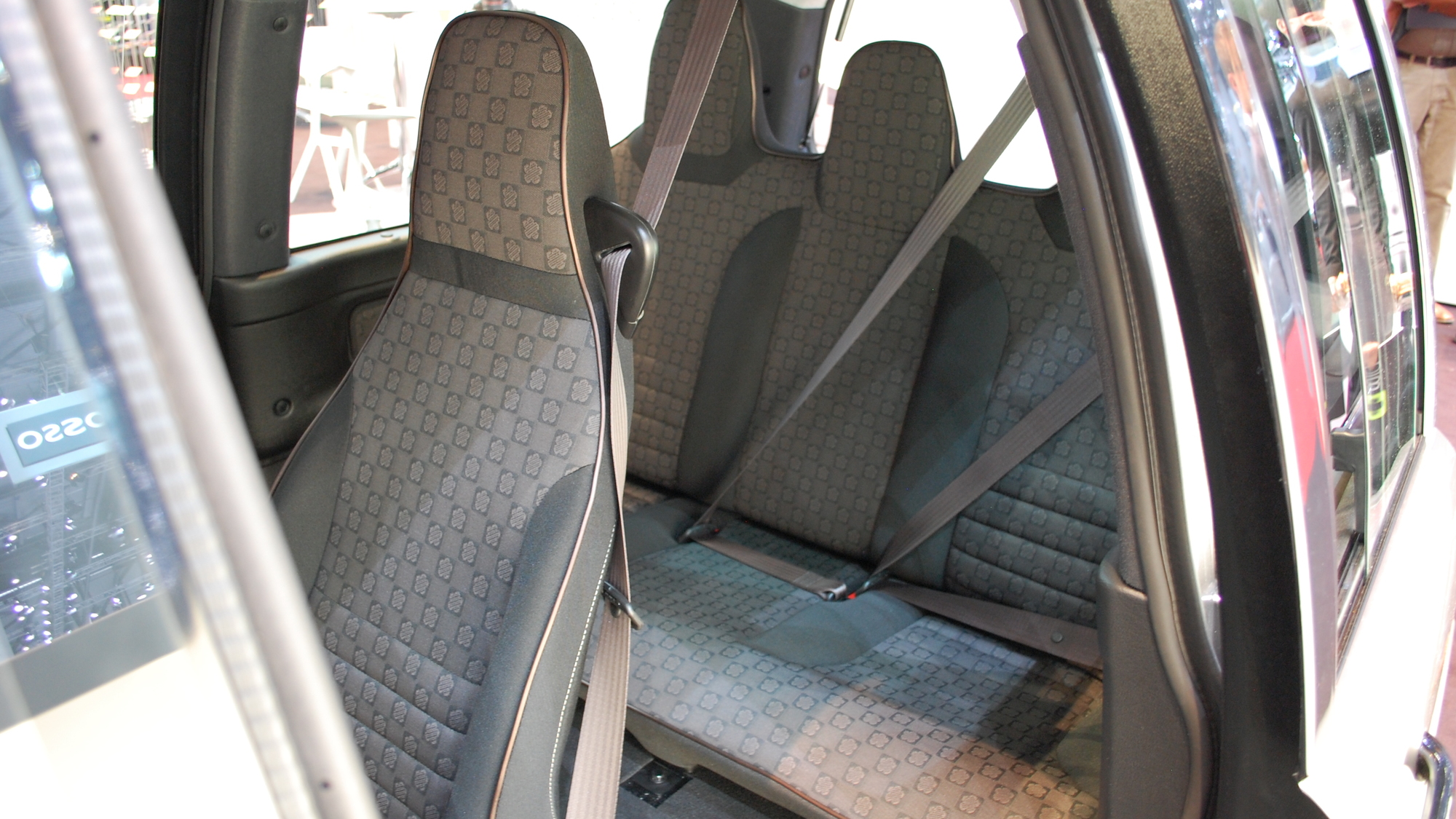 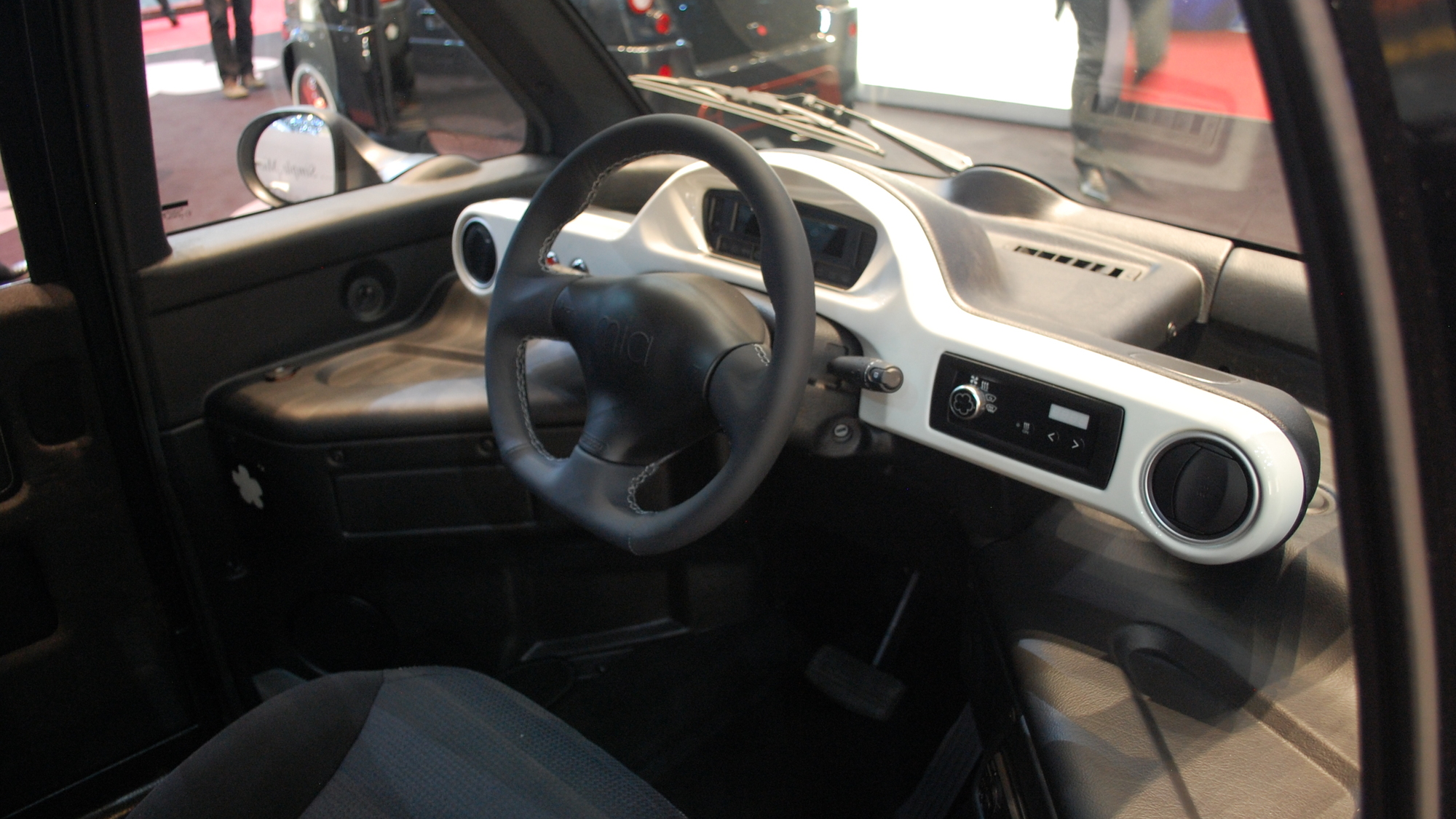 13
photos
If you read our guest post by actor, TV presenter and electric car convert Robert Llewellyn, you may have noticed his mention of a little electric microbus by the name of "Mia". Sitting in the middle of halls 4 and 5 with major manufacturers like Honda, Toyota, Renault and Ferrari in all directions, the little cars were punching above their weight and attracting a surprising amount of attention.

You'd be forgiven if your first thought when approaching the stand was along the lines of "here we go again". Small and unusual electric cars come and go with regularity, and indeed had you spent long looking at some of the electric vehicles on offer in Geneva's 'Papillon Vert' green vehicle hall you might think that the Mia was more of the same - poorly styled, poorly built and not a hope in hell of market success.

Still, this is why you shouldn't judge a book by its cover. We had a better look at the Mia and against all odds, came away impressed.

As Robert Llewellyn hinted, this isn't a car that would impress those wanting a "proper car" with a traditional bodystyle, high performance and a cool image. Dig deeper than superficial considerations though and you find some very clever touches and intelligent design.

It makes sense to start from the inside out, as this was clearly how the designers began, prioritizing function over form. Function in the Mia begins with a central driving position that allows for a panoramic view from the driver's seat and an ergonomic driving environment with plenty of space in all directions. The dashboard has areas to affix a tablet PC or other devices with the needs of business users in mind.

There are currently three Mia variants, and the model you pick influences the interior layout. The regular, short wheelbase Mia has two passenger seats sited behind the driver, in a similar layout to the McLaren F1 supercar. Both passengers have a clear view forwards and a great deal of legroom. The Mia L has a longer wheelbase and a three-person bench seat behind the driver, but the extra length of the vehicle still ensures good space. The third Mia is a box van, which sacrifices the seats for a large, flat floor, though a single passenger seat is an option.

Access to those seats is via twin sliding doors, one on either side, that include cutouts into the roof and floor so passengers can step easily into the vehicle. This also means that whichever side of the road you park, everyone can get in via the sidewalk rather than taking their chances roadside.

Moving to the exterior, the cleverness continues. The body is made entirely from tough ABS plastics that shrug off scratches and dents. They also enable the car to be incredibly light. The smallest Mia weighs just over 1,650 pounds including the battery. The 'heaviest' Mia, the L, still tips the scales at less than 1,730 pounds.

As mentioned previously, those chunky doors slide back, and the tailgate is a single pane of glass. It's no oil painting but it's certainly functional, and it's also much smaller outside than the space inside would have you believe. The regular Mia is 9 feet 4 inches long - five inches shorter than the upcoming Scion iQ and only half a foot longer than the Smart ForTwo - but with greater space inside than either. It even has decent luggage capacity of just over 7 cubic feet - the Scion has little over a measly cubic foot unless you fold down the seats.

The larger Mia L adds another 8 cubic feet of luggage space (despite the extra passenger) from an extra foot of length. The van... well, it's a van, and has about 53 cubic feet of space in a body the same size as the Mia L.

As you'd expect on this site, the Mia is an electric vehicle. It makes use of an 8 kilowatt-hour battery that's small enough to be charged in only 3 hours from a typical European 230 volt, 16 amp socket. The small battery means a short range of only 50-56 miles, but a larger 12 kilowatt-hour battery is available giving a range of up to 80 miles should a driver wish to venture further out of city limits. Top speed is a city-adequate 70 miles per hour, and the whole lot is warrantied for three years or just over 30,000 miles.

Mia Electric versus Volkswagen Up!

It's hard not to draw comparisons with Volkswagen's Up! electric taxi concepts, revealed late last year. The Volkswagen and Mia are both one-box designs majoring on interior space, maneuverability and clever interiors, for use in city centers.

The Volkswgagen has the more sophisticated drivetrain and VW has claimed their taxi would allow 180 miles of range and recharging in only one hour, significantly higher and quicker than the Mia. It's probably going to be a more polished product too (if they produce it) befitting their pseudo-premium image. That said, the Mia felt very well-built when we sat inside.

It's nothing like as clever though with a regular two front, two back seating layout and it's over 2.5 feet longer and over 1,500 pounds heavier - if the extra weight is all in the batteries, this would account for the much larger range.

It's also not guaranteed for production, unlike the Mia which apparently has a growing order book in Europe and deliveries are expected to begin in 2012, a year before the VW's touted debut.

Beyond its concept though the Mia unfortunately has one other thing in common with the Volkswagen - it's not guaranteed to make it to the U.S. market. With a starting price of just under 20,000 Euros (a little under $30,000) it's relatively inexpensive by the standards of other EVs sold in Europe and almost certainly less than the Volkswagen would cost, but for a small manufacturer it must first prove itself in the European market before making the leap to American sale and production.

Nevertheless, it's evidence that with intelligent design even a small EV maker can produce a product that isn't shamed by the biggest players. That it's backed by some big German and French investors and the company had its beginnings in experienced French EV specialists Heuliez should only help the project to become a success.