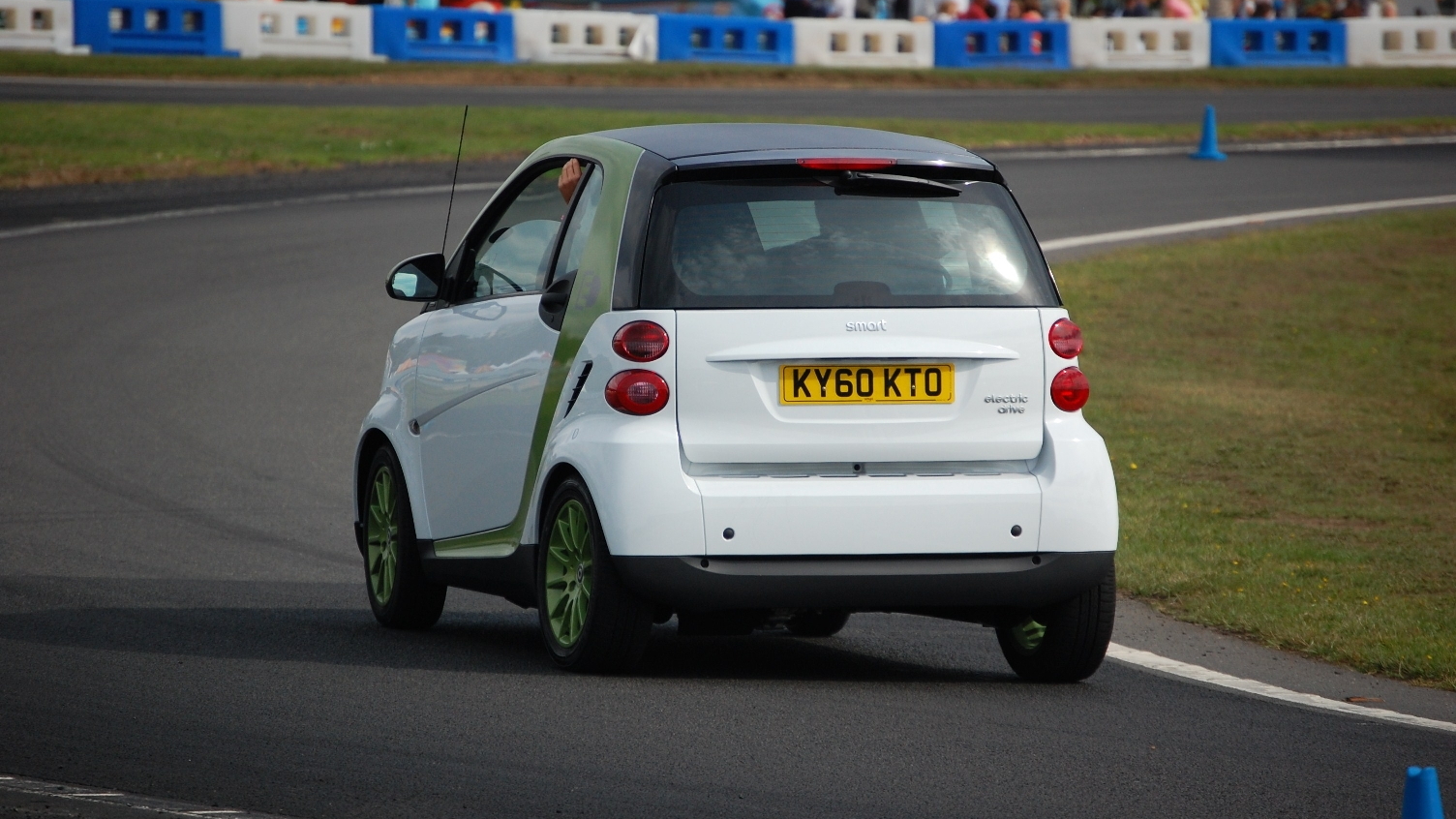 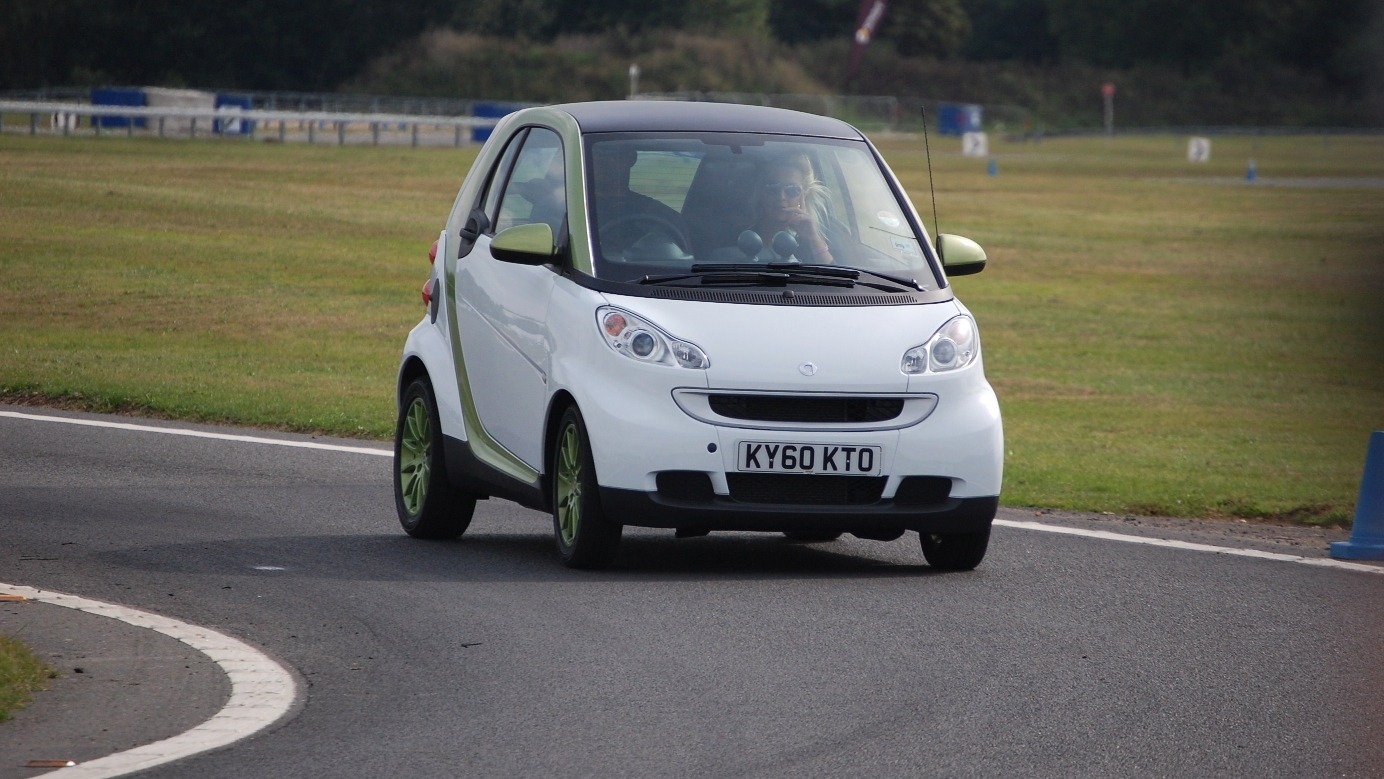 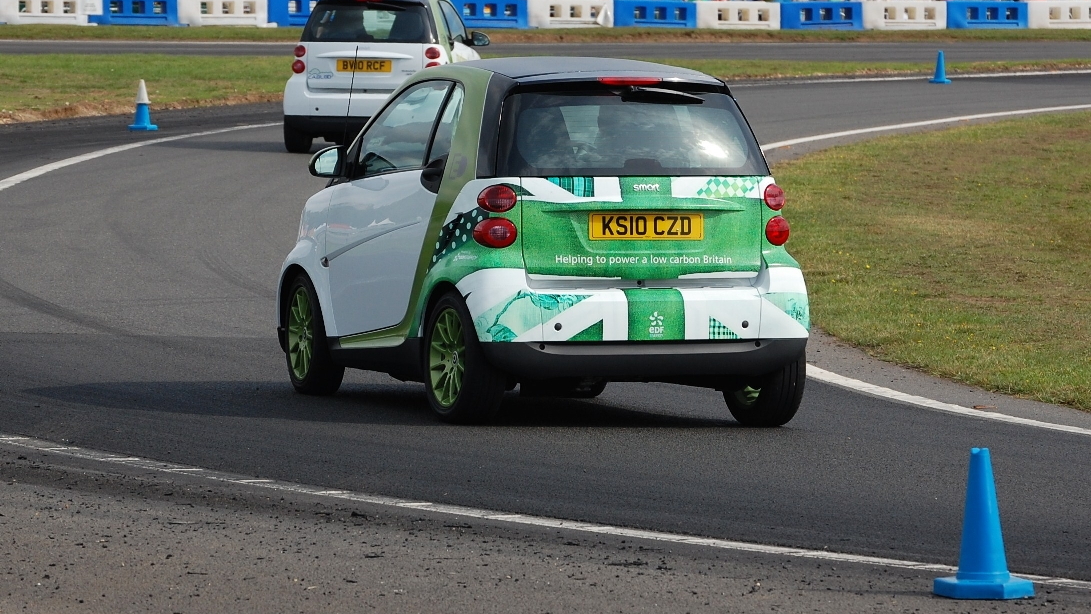 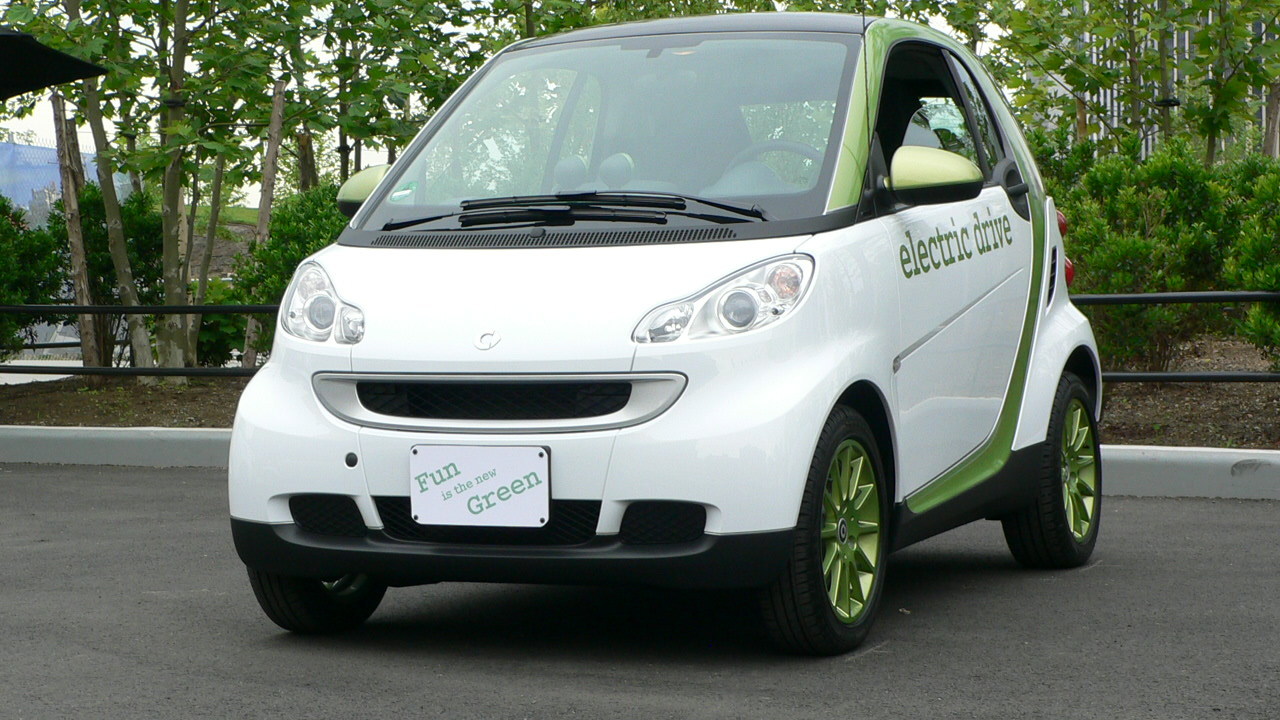 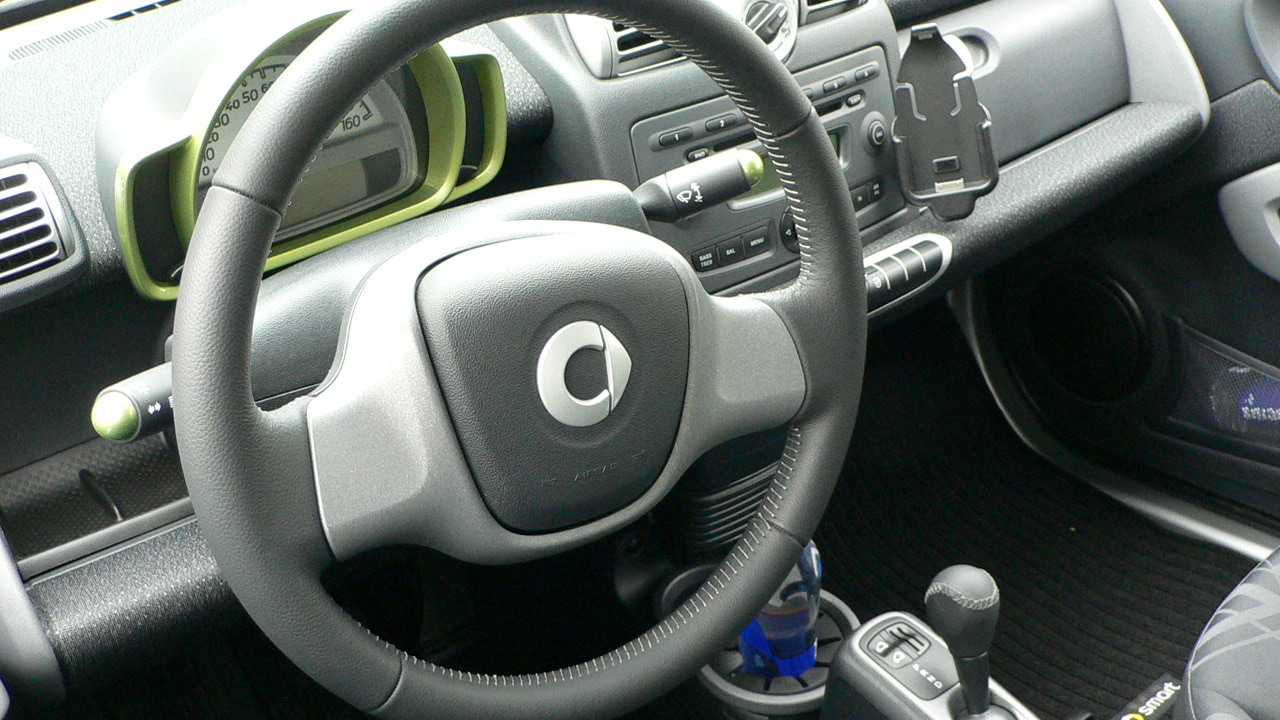 It's fair to say that Smart haven't had quite the success they were probably hoping for in the U.S. with their diminutive Fortwo. Gambling on consumers 'downsizing' due to spiralling fuel prices, the initial rush to own the tiny city car has slowed to a trickle.

Not only that, but recent research shows that only 8.1 percent of owners would buy another. That must be giving Smart executives some sleepless nights.

Maybe the 2011 Smart Fortwo Electric Drive will renew interest in the model? We got a chance to drive the latest version of Smart's low-volume and lease-only electric model at the Mercedes-Benz World test track at Brooklands in the U.K.

Firstly, some facts. The first-generation Electric Drive began testing in Europe in 2007. The cars were developed by Zytec Electric Vehicles, replacing the regular gasoline engine with a 30 kilowatt (41 horsepower) electric motor powered by a 13.2 kWh sodium-nickel chloride battery pack. It offered a 68 mile range and a top speed of 75 miles per hour.

The second generation car that we drove is based on the later 451 model Smart ForTwo and this time, Tesla Motors provide the 14 kWh lithium-ion batteries. These power an electric motor that runs at 20 kW (27 horsepower), but also offers a peak power of 30 kW (40 horsepower) for two minutes. Torque is a useful 89 pounds feet.

With a conservative power output and a top speed of only 62mph, range has increased over the original Electric Drive to 84 miles. Given that the ForTwo is largely a city car, the greater range will no doubt be of more use to drivers than a high top speed. Smart claim that at average city speeds of 30mph, range can be as much as 138 miles.

Smart claim the battery pack takes three hours to charge from 20 to 80 percent on a 220V charger.

Having travelled to Mercedes-Benz World in a diesel-powered ForTwo, the Electric Drive's cockpit environment was immediately familiar. The differences are very subtle. Where normally a rev-counter and a clock would sit in the optional dash-top pods, we now have a charge level indicator and a dial to show if you're using power or whether it's being regenerated.

The only other real difference (besides some fancy green trim to match the exterior) is the gear selector. The regular ForTwo's 'Softip' and 'Softouch' tiptronic-style options have made way for traditional park, reverse, neutral and drive options.

Other than that, it's a standard ForTwo - enough space for two six-footers, funky dashboard and simple controls.

In common with the majority of EVs, the Electric Drive is completely silent at a standstill whether on or off, and from inside the car at least, the motor is inaudible with only wind and tire noise present as your speed increases. Outside the car a little whine is noticeable, but at lower speeds we still had people stepping into our path having not heard the car...

Our car had been used for demonstration drives all day and by the time we took our seat, charge was less than 20 percent. The representative from Smart remarked that power decreases a little as charge gets low to preserve range, though off the line the Electric Drive felt smooth and torquey.

With no gearbox to worry about, the Electric Drive is not only incredibly easy to drive but also mercifully free of the long pauses to change gear that ForTwo owners will be all too familiar with. Acceleration is on par with the gasoline models, but far smoother without the need to change gear.

We only had two laps of the track in which to sample the car at higher speeds but the car proved its worth. At speeds of up to 50mph it felt quiet and stable, and braking for the corner at the end of the straight was completely fuss-free. Indeed, pedal feel seemed better than the regular ForTwo, and the regenerative braking provides a little more retardation than the normal car's engine braking.

Cornering was also improved over the standard car. Although heavier, the extra weight of batteries and motor is low in the chassis. The Electric Drive has apparently had a few tweaks to the suspension to make the most of this, so grip and poise are impressive for such a tall and narrow vehicle. Steering is accurate and quick enough to avoid arm-twirling in tighter turns.

Because drive is direct, you also lose the regular car's sometimes uncomfortable feeling of drive being engaged and disengaged when you come on and off the gas, so stability through turns is better. The car still understeers eventually, but grip is more than adequate for the sort of conditions you'll find in a city.

This is where things begin to go wrong.

The biggest issues are price and availability. Only 250 units are coming to the States and if you're lucky enough to be taking part in field trials, you'll find your bank balance lighter to the tune of $599 per month for the next 48 months and $2,500 at the start of the trial in October.

This makes it significantly less available and more expensive than the larger, quicker and altogether more serious 2011 Nissan Leaf, and Nissan won't take your car away again after four years.

Smart expects U.S. sales to begin in January 2012, so major players like Nissan, Chevrolet and Mitsubishi will already gained significant market share by that point. By this time prices will have to be lower if Smart are to sell any cars in whats sure to be a very competitive market segment.

Performance is  quick enough to surprise larger cars at the lights around the city. It's incredibly quiet and smooth which is great for reducing stress levels in traffic, and although our track test couldn't shed much light on the ride quality, we suspect the extra weight will take the edge off smaller bumps, too. Handling and grip betters the standard car.

Above all, the ForTwo Electric Drive was fun. There aren't too many cars that make scooting around a grocery store parking lot fun, but this one is just that.

The limited range makes longer journeys less likely than the regular gas versions, but the ForTwo's natural environment has always been the city and to that end, Smart are onto a winner. We just hope the third generation model will be cheaper and more widely available.