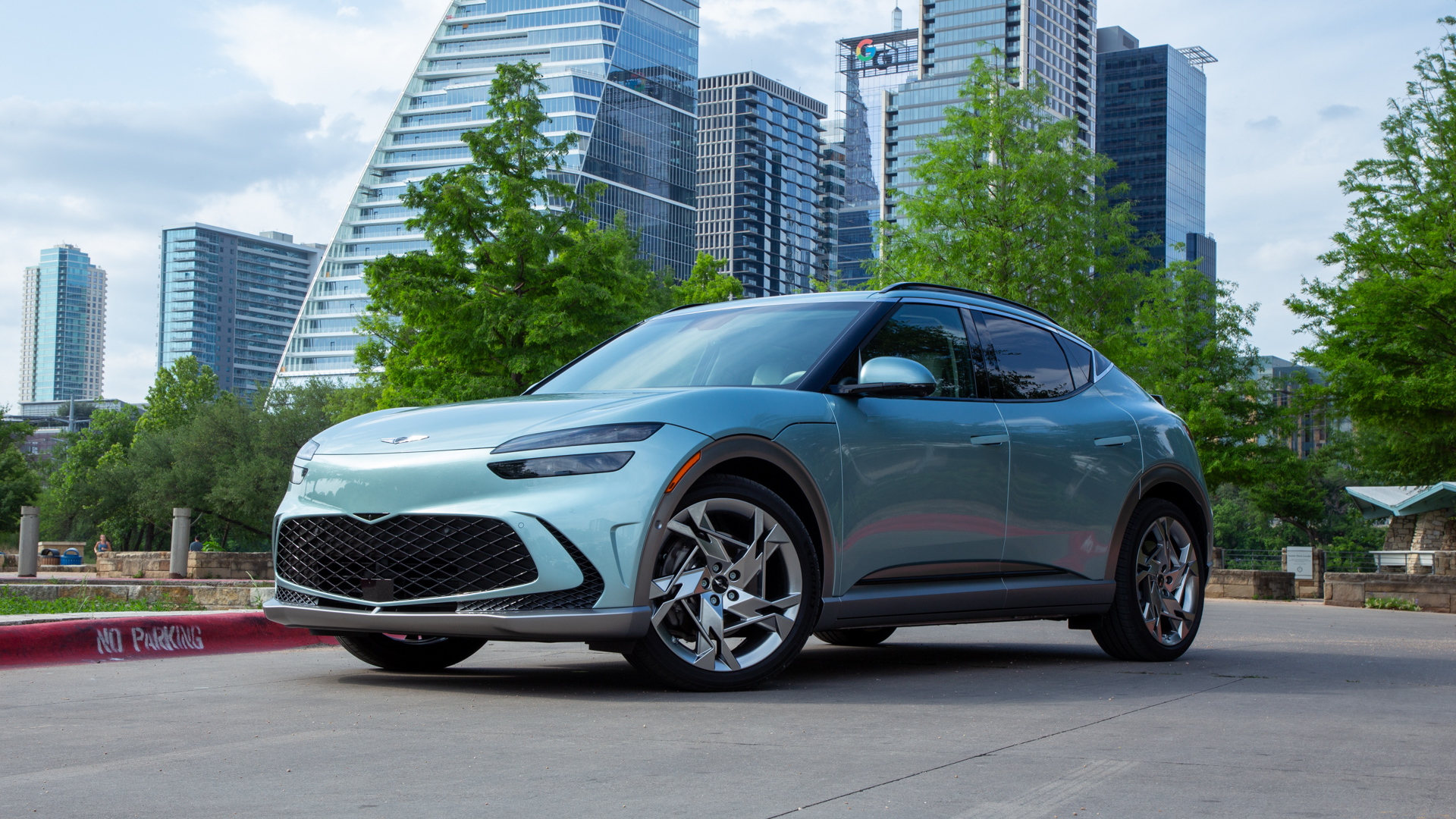 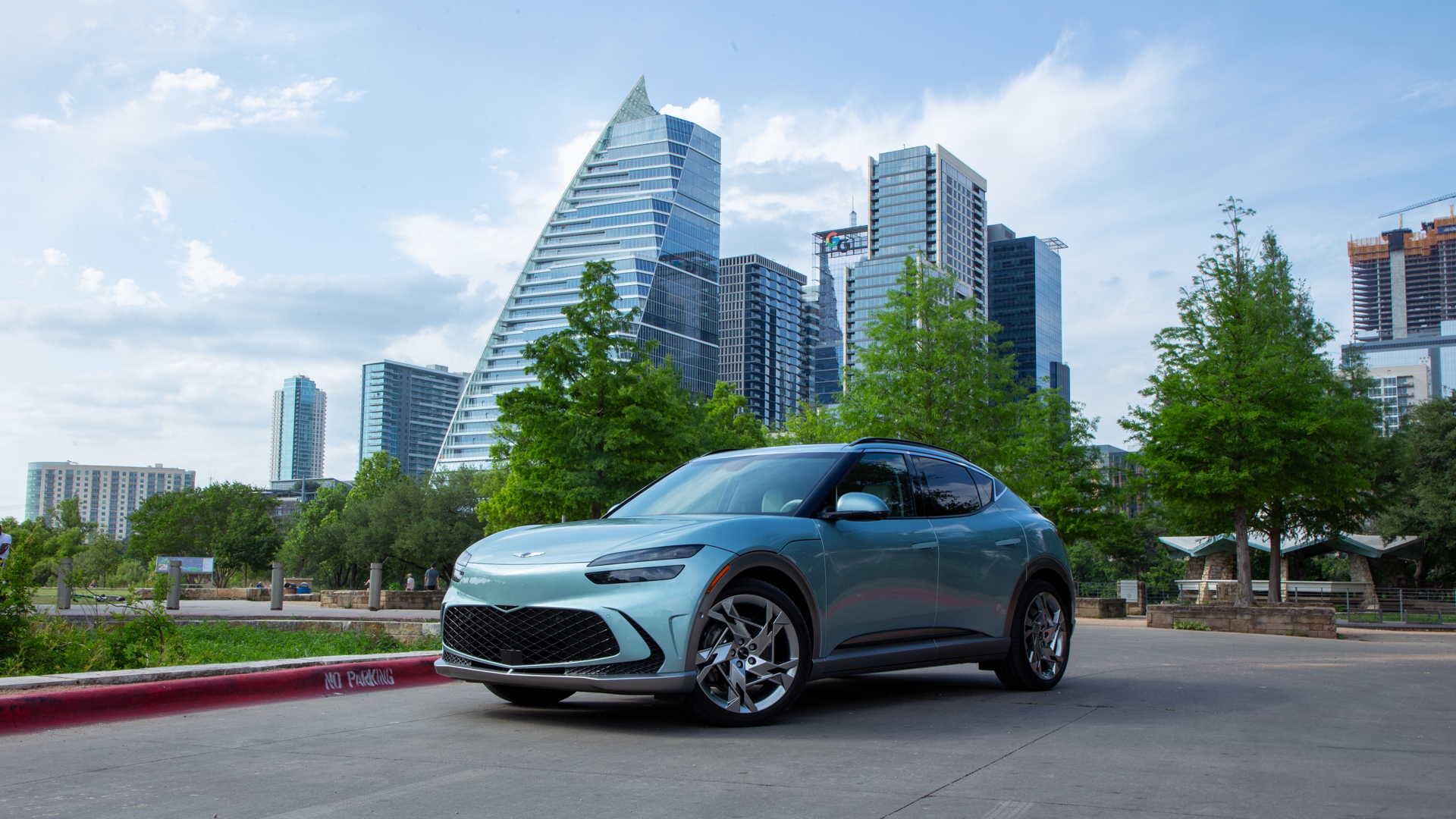 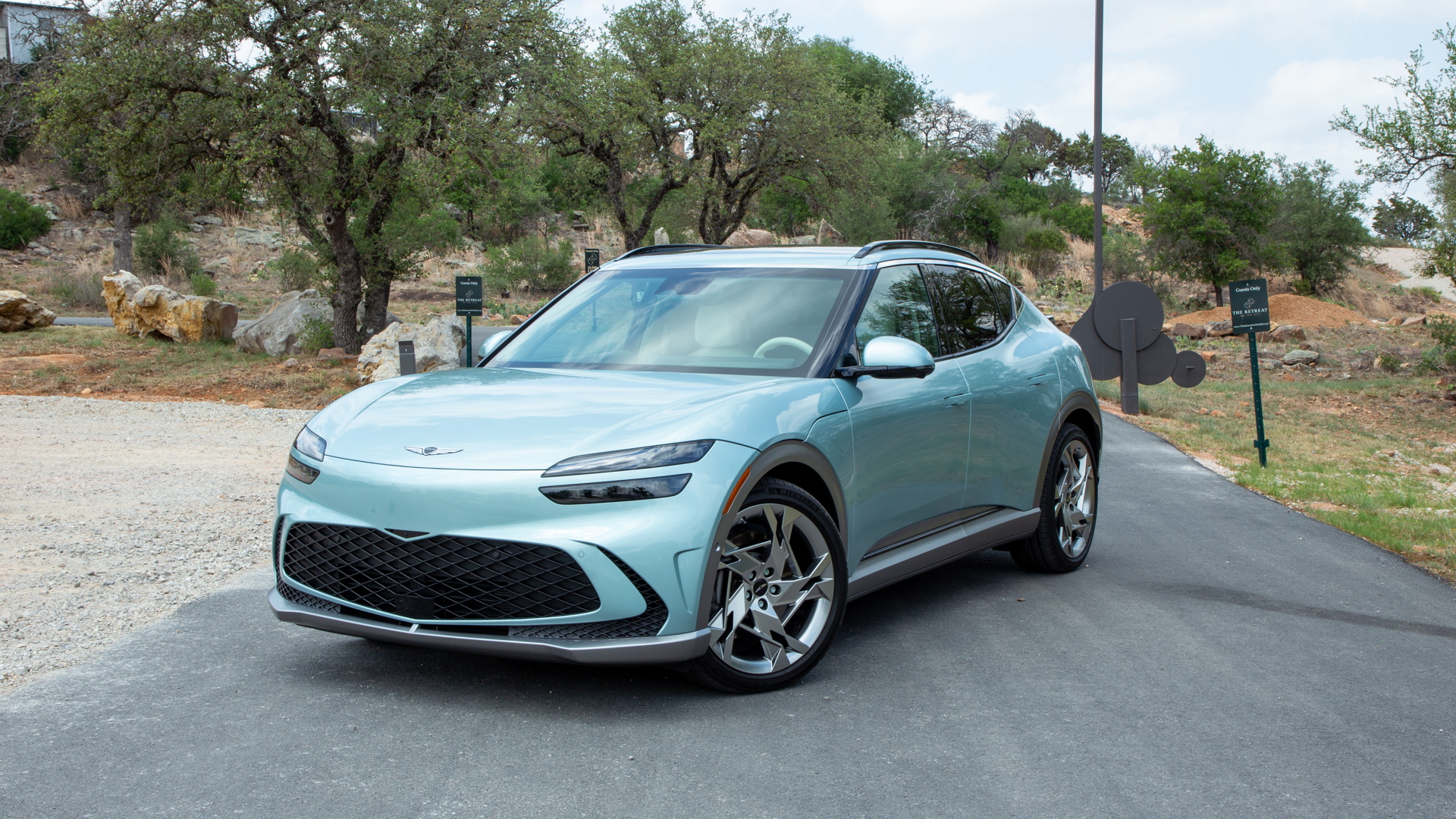 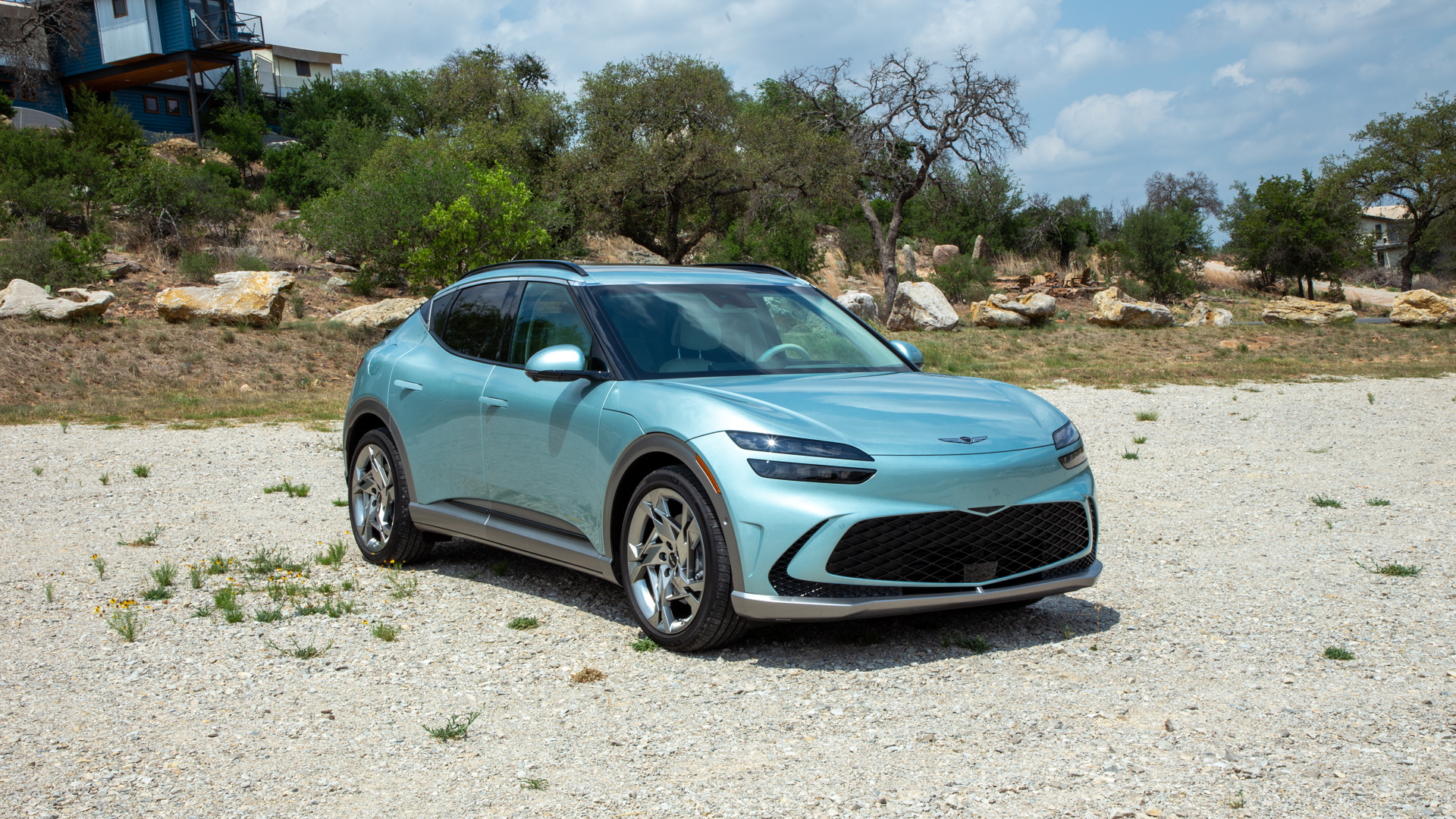 Genesis has spent the past few years putting new platforms under its gas vehicles to give the still new-ish luxury brand some needed differentiation from its Hyundai roots. But with the new 2023 GV60 and the rumored forthcoming GV90, it’s returning to that lineage as those vehicles are both based on the Hyundai E-GMP platform.

This isn’t a bad association at first blush. That platform does remarkably well under both the Ioniq 5 and EV6, with both vehicles earning strong recommendations from our staff. But expectations are different for the Genesis model, which completes the Korean triumvirate of new, small electric SUVs (or tweener hatchbacks, or big wagons, whatever does it for you). It has to deliver a more luxurious take on electrification than its counterparts. I traveled to Austin, Texas to see if the GV60 can deliver a different type of experience than its counterparts and if our third time on the Hyundai E-GMP platform is a charm, or a dud.

The first way that the GV60 distinguishes itself is with its powertrain. Its 77.4-kwh battery pack matches those of the longer-range versions of the Ioniq 5 and EV6, but the Genesis offers a Performance trim level with more power. The base Advance model has the same output as the AWD versions of the Hyundai/Kia, with a 74-kw front motor and a 160-kw rear motor producing a combined 314 hp and 446 lb-ft of torque. Stepping things up is the Performance model that I tested, bumping up the front motor to 160 kw to match the rear. Horsepower jumps up as well, to 429 hp though the torque figure remains the same.

It’s evident from the first launch that the GV60 Performance has more juice to it than either the Ioniq 5 or EV6, leaping off the line with more vigor and zipping up and past highway speeds with unfettered ease. And if that’s not enough for you, the Performance models also offer a Boost mode that’s activated via a green button on the steering wheel. Pressing that shoots output up to 483 hp and 516 lb-ft, increases of 54 hp and 70 lb-ft respectively, for 10 seconds. With this button activated, the GV60 turns into even more of a rocketship (it’s especially fun for hilly highway merges) and the initial tip in of the throttle feels even significantly more responsive.

Genesis says that there’s a theoretical limit to the amount of times you can hit this button in a row, as components heat up. But in the name of science I hit the button six straight times to go for a clean minute of boosted fun and the GV60 didn’t even blink. It was also a hot day in Austin,  in the mid 90s, but that seemed to have no effect. The system also smartly doesn’t activate boost mode if you hit it while the accelerator isn’t pressed, so if you hit the button while slowing for a corner your 10 seconds won’t start until you get back on the throttle.

While the GV60 accelerates, stops, and starts with verve, it’s the corners that confuse the whole presentation a bit more. The Performance models add an electronically controlled suspension with road preview (a camera that scans the road ahead for potholes and the like), a setup that we’ve liked in another one of Genesis’ SUVS, the GV70. In this case something has gone wrong in the tuning, the GV60 doesn’t do a great job of isolating the cabin from broken pavement and in corners, the nose rebounds too much and unsettles the front of the car.

The unsettled ride and handling are unexpected inadequacies, and it puts the GV60 behind both the Ioniq 5 and EV6.

The GV60 is also about 200 pounds heavier than its compatriots, contributing to a small drop in range. The Advance has an estimated 248 miles of range, compared to 256 miles (Ioniq 5) and 274 miles (EV6) for the AWD equipped versions of the Hyundai/Kia. Performance models bring up the rear at 235 miles of range.

Our drive route was only about 140 miles, so no fast charging was necessary, but the GV60 is estimated at the same 800-volt fast-charging numbers as the other two vehicles. It can handle up to about 235 kw of power, allowing it to go from 10-80% charge in just 18 minutes, or add 64 miles of miles in five minutes.

Inside is where the GV60 shines more brightly, if you have a choice of interiors the white or blue (Performance only) help the interior design to pop more. In black you lose a lot of detail and the cabin looks too dour. The GV60 doesn’t have a sliding center console like the Ioniq 5, but it does have a large storage space at the bottom of it that can be accessed by both front and rear passengers.  Materials are fantastic and the Performance model adds on nappa leather upholstery, a massaging driver’s seat, and heated rear seats to give the GV60 even more luxury credentials.

Though it’s among the smallest and shortest vehicles in its class at 177.8 inches long and 62.6 inches tall (the Tesla Model 3 is 187.1/63.9 inches), the interior still feels plenty roomy for four adults with ample backseat legroom and headroom for even taller passengers. It’s also 4.7 inches shorter than the Ioniq 5, which cuts down cargo room slightly but it’s still an ample 24.0 cubic feet behind the rear seat.

The standard 12.3 inch side-by-side screens will look familiar, it’s the same setup both the Hyundai/Kia share. Where the GV60 starts to show off is other technology. A small camera has been mounted on the B-pillar that powers a facial recognition system, while there is now a fingerprint reader on the edge of the center console. Setting both systems up was shockingly easy, it only took about 90 seconds from start to finish for both. Once it was done, a Genesis representative took the keys to the car from me and said “you won’t need these.”

This is a feature targeted at those who like to run or surf without an easy place to keep your valuables. I am neither of those things, but it’s quite satisfying to use a quick stop at the B-pillar to open (or lock) the GV60 and then just a tap of the fingerprint sensor gets me ready to go.

Genesis assured us that the system, which uses infrared cameras so it can work in low light situations, can detect if it’s actually your face or a photo of you for example. Once you use your face to unlock the doors, your personal profile is activated and the driver’s seat, steering wheel, mirrors, and infotainment preferences get loaded in. The GV60 can store up to two sets of faces and fingerprints.

The other part of the Genesis interior that stands out is the crystal ball that flips out when the GV60 is off. Its color can be changed in the infotainment system and the ball becomes an easy visual reference for telling if the vehicle is on or not—which can be harder to tell in EVs than you think.

The 2023 GV60 starts at $59,980 (including a $1,090 destination charge) and for that the Advance offers 12.3-inch screens for the instrument cluster and infotainment, a Bang & Olufsen sound system, leather upholstery, and heated/cooled front seats. From there, the Performance starts at $68,890, adding nappa leather, a massaging driver’s seat, heated rear seats, 21-inch alloy wheels, and those powertrain upgrades mentioned above.

This results in a large price gap between the GV60 and the Ioniq 5 or EV6, especially in Performance configuration—but then again, the GV60 is a luxury vehicle while those others are not. We’ll have to wait to get behind the wheel of an Advance version to see how its suspension reacts and cast final judgment. Taken on its own the GV60 is rather good, but its counterparts are great and that's the rub.

Put the GV60 up against its luxury kin and it actually looks better. Its interior is much higher quality than the Model Y and a lot more powerful than the Audi Q4 E-Tron, though we’ve yet to drive that vehicle to give it a good shakedown. There are also more contenders on the horizon, with the Lexus RZ and Mercedes-Benz EQB coming down the pipeline as well. This is about to become a very crowded segment and it will be interesting to see how the GV60 compares to these external rivals, and not just its own stable.

The GV60 goes on sale on May 17, in California, Connecticut, New Jersey, and New York at select retailers with a goal of expanding availability later this year. These geographic restrictions sound more like the Ioniq 5, which debuted in 19 states, than the EV6's nationwide distribution.