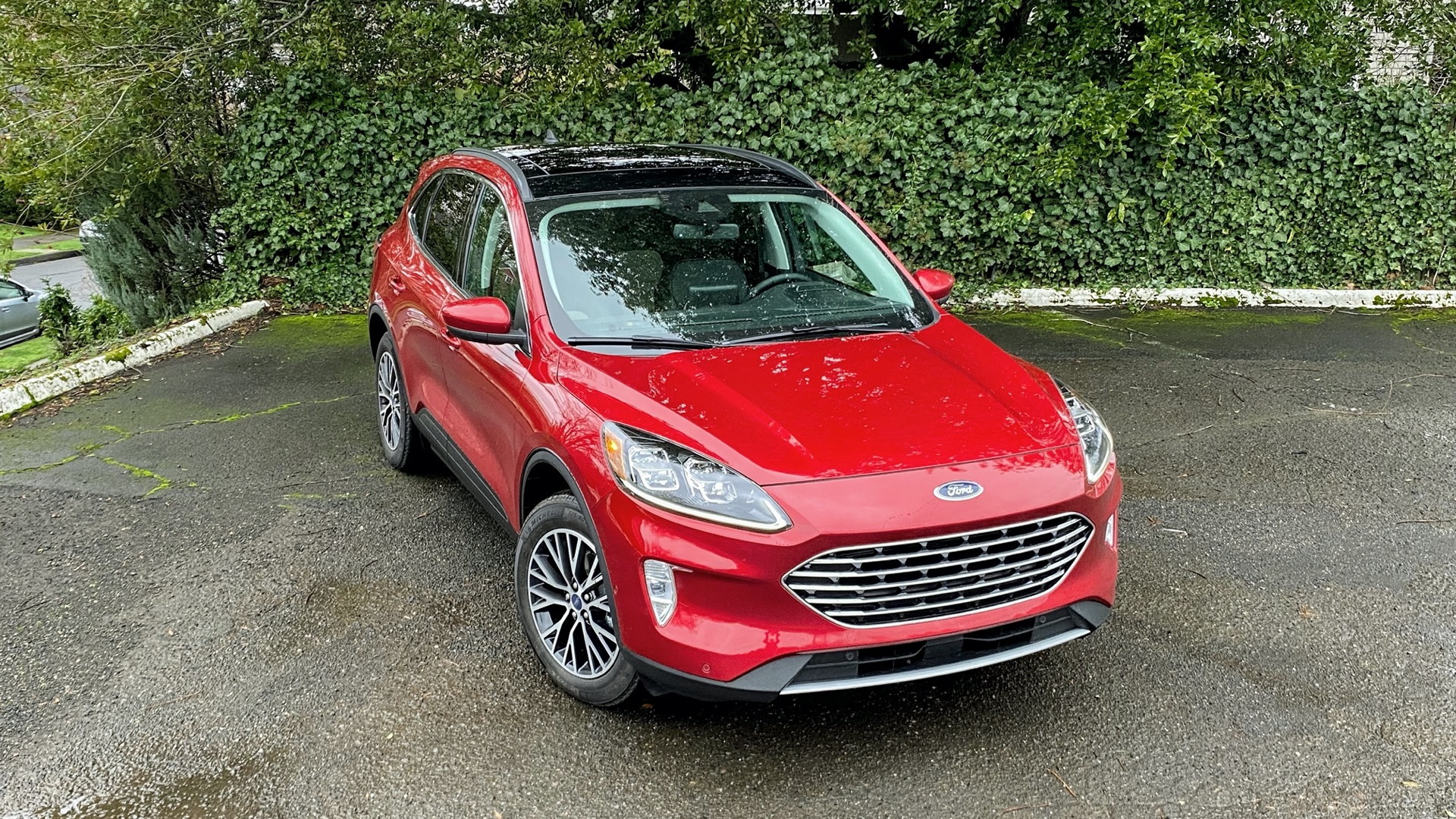 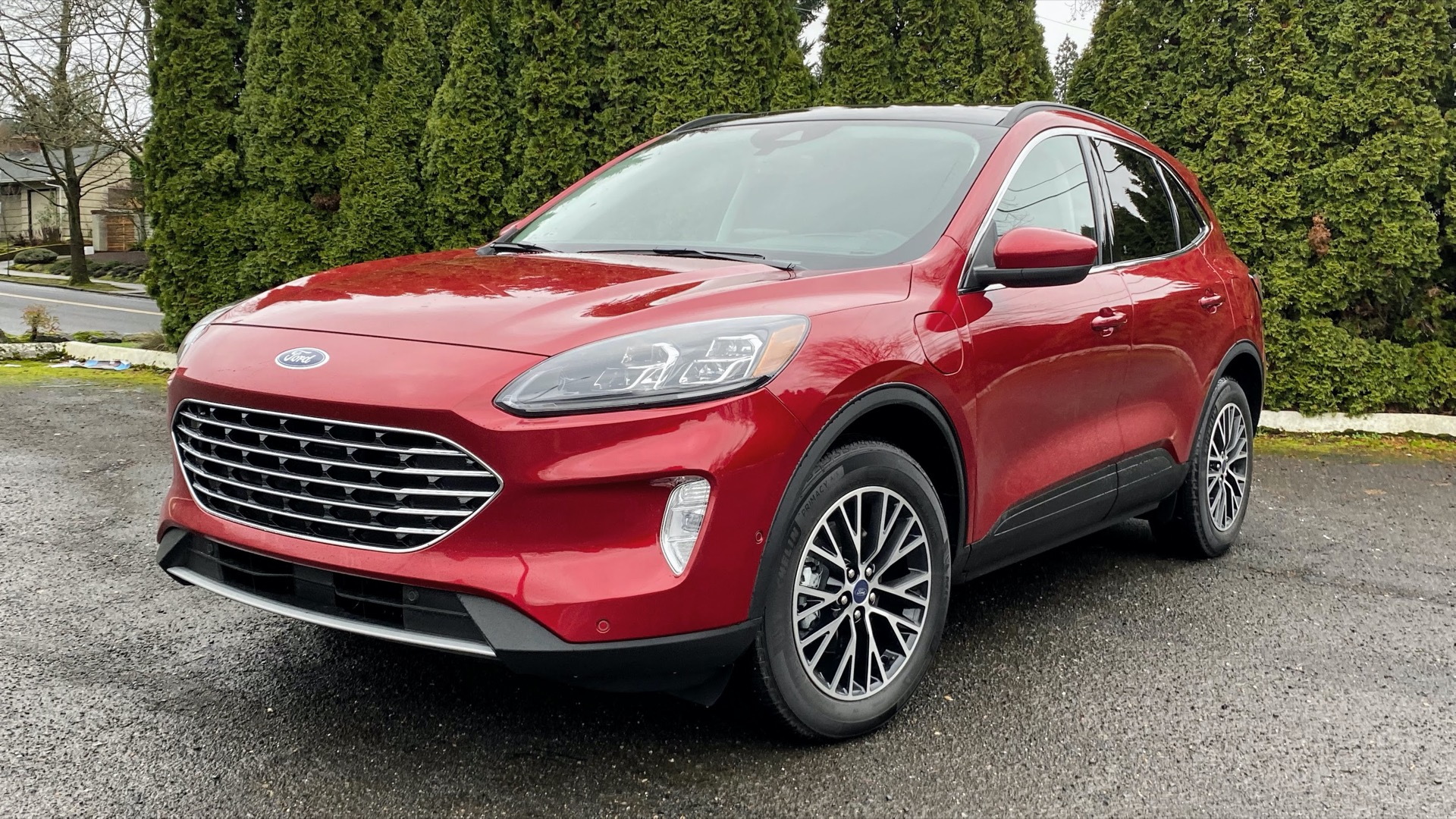 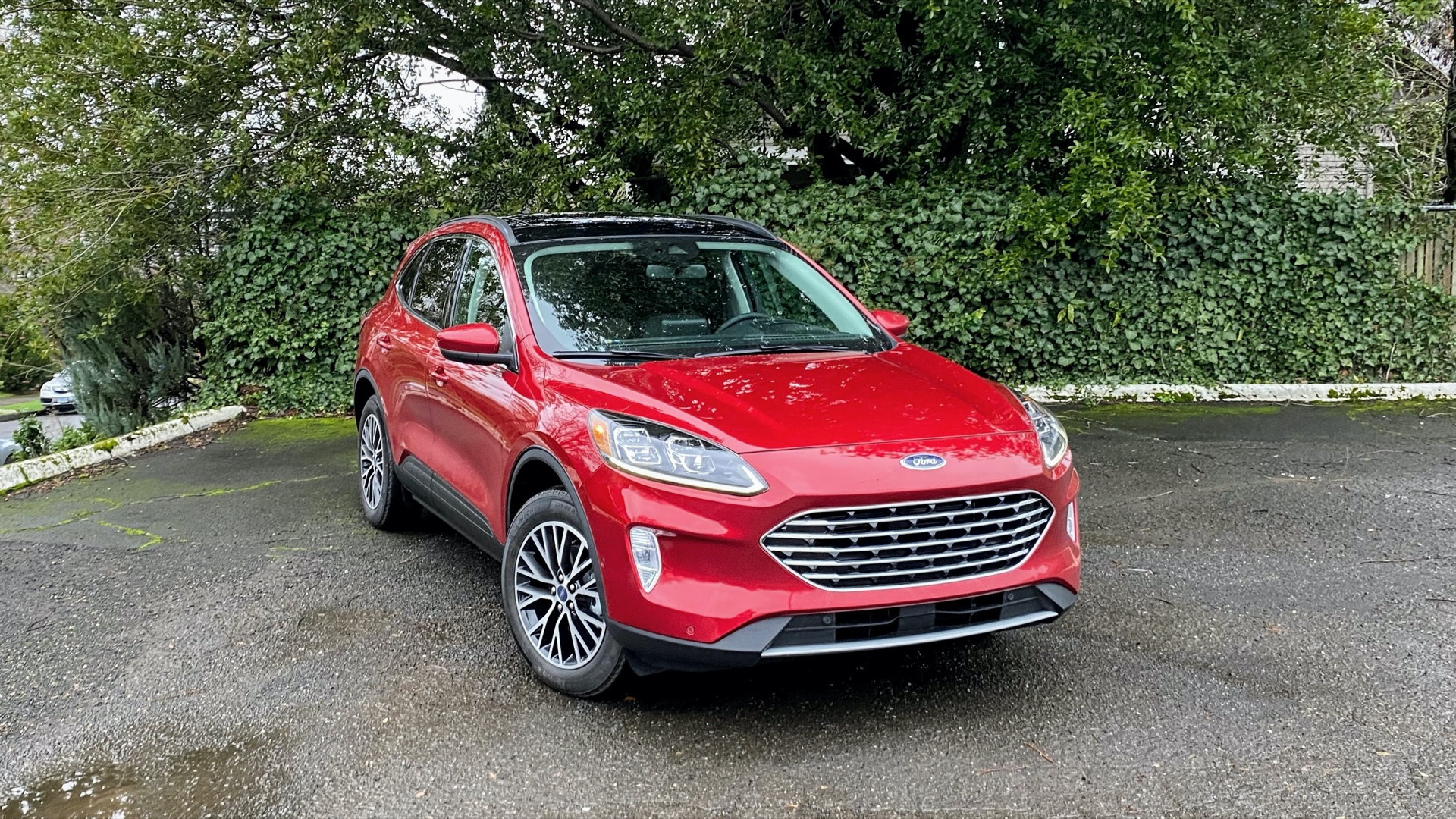 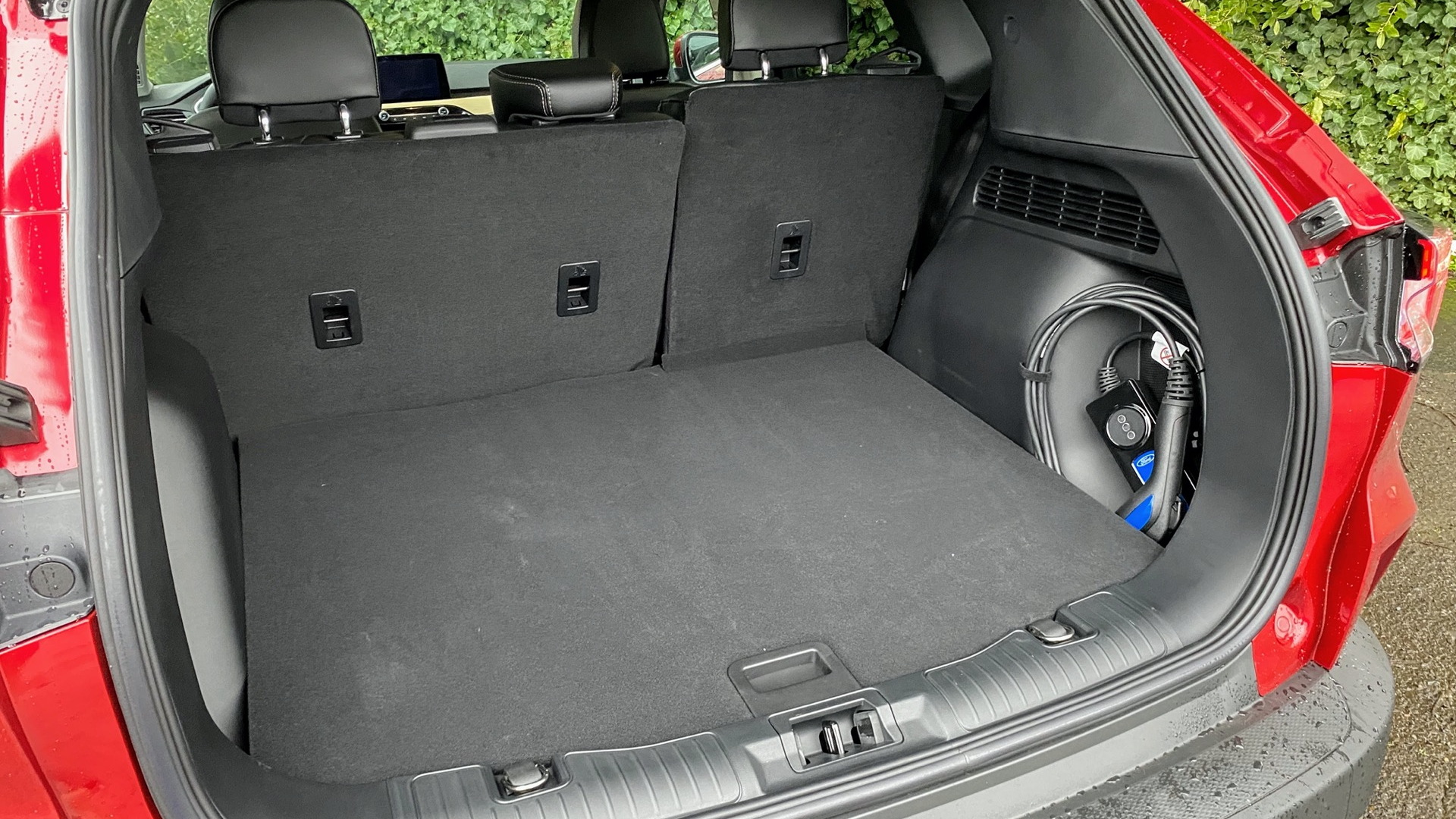 Ford knows plug-in hybrids well. Nearly a decade ago it offered a smart set of Energi models proving that drivers were eager to plug in.

With a Fusion sedan and C-Max hatchback, those Energi products were the perfect on-ramp for the electric vehicles we assumed would follow in greater numbers. They’re here. But in the age of the Mustang Mach-E and the F-150 Lightning, it feels like Ford’s sole plug-in hybrid, a version of the Escape compact crossover, is a little lost.

Mostly, it’s that Ford hasn’t evolved some of the ideas from its Energi models to the present. With the arrival of those fully electric models, plug-in hybrids could today be important supporting players.

With the Escape Plug-In Hybrid,  Ford doesn’t appear to trust the owner to call on the electric propulsion they paid extra for. The electric motor feels auxiliary to the gas engine.

I fully charged the 2021 Escape Plug-In Hybrid on a 25-degree winter day, and then selected its “EV Now” mode as I headed out for an evening drive to see what a cold-weather, worst-case scenario might be for range.

Less than a minute in—on a steep downhill slope, at 20 mph—the gasoline engine started up, with the instrument panel declaring, “Engine Enabled for System Performance.”

According to the owner’s manual: “Your vehicle could enter Engine Enabled mode if system conditions require it. A message displays if this occurs. This is a normal function of the system and your vehicle returns to EV Now mode when possible.”

I rebooted twice more, and the third time was a charm. The engine stayed off and let me drive tailpipe-emissions-free for 22.1 miles on some suburban errands (note in the photo below that 0.3 mile of obstinate gasoline use). And it even let me turn on resistive heat and climate control, to keep the windows clear—not something I can claim of all PHEVs.

Of course the electric-only range was a lot shorter than it would otherwise have been because of the extreme cold. But it seems hard to believe that someone wouldn’t want to keep electric-only while bringing the kids to school in the morning, or making a quick run to the grocery store, no matter how chilly. It’s one of the strongest use cases for having a plug-in hybrid, and Ford isn’t working with its own data showing—as it did to us ad nauseum years ago—that PHEV customers were willing to plug in very often.

That said, you’re not giving up any space or utility in going with the Plug-In Hybrid versus hybrid or non-hybrid versions. The Escape PHEV packages 14.4 kwh of liquid-cooled battery—more than previous Energi models— under the rear seats, where it wouldn’t interfere with the cargo floor. Oddly, the 12-volt accessory battery is relegated to a lonely looking well under the cargo floor where a temporary spare would otherwise be.

In fairer temps, the battery pack enables an EPA rating of 37 all-electric miles. It’s part of a hybrid powertrain incorporating a 165-hp, 2.5-liter inline-4 engine, running on an efficiency-and-emissions-focused Atkinson cycle and part of the fourth-generation version of Ford’s planetary-gear hybrid system. Altogether, the system makes 200 hp when run as a hybrid, or 221 hp with plug-in juice added to the mix.

Just a day later, it did better. Fully charged again, I headed out into drizzling rain and 46 degrees—a Portland winter mainstay—and drove electric for more than 27 miles. I followed a loop I’ve done in a number of other plug-in hybrids: 8 miles of 65-mph freeway, 8 miles of 50-mph boulevard with occasional stoplights, then the remainder on 30-mph streets with more frequent stops.

Ford does charging scheduling and climate preconditioning well, and if you drove an Escape PHEV every day, you’d have it in the routine of warming up the cabin ahead of the commute—and likely then doing several more electric miles.

The Escape PHEV is excellent at hybrid efficiency, without any plug-in charge. On a 53-mile loop I’ve done with a range of hybrids, going from about 300 feet altitude up to 1,000 and back, incorporating lighter freeway driving, rolling country roads, and 40-mph boulevards about equally, I averaged an excellent 46 mpg. And on another informal loop of shorter, around-town errands, the Escape PHEV settled into an average that was close to 40 mpg.

The Escape Hybrid is now offered with available all-wheel drive—via a propshaft system—but the Plug-In Hybrid remains front-wheel-drive only. The Toyota RAV4 Prime, by contrast, is far more powerful and has a rear motor, allowing all-electric all-wheel-drive operation, while a larger battery pack simply adds in more electric range up to 42 miles.

Tall on efficiency, short on polish and pizzazz

While the Escape PHEV’s powertrain is an efficiency pro, the rest of the vehicle is hardly at ease with itself. It’s the heaviest Escape in the lineup, at an estimated 3,870 lb listed across all PHEVs, and the Titanium I drove is at the top of the PHEV weight range. It didn’t have anywhere close to the same nimble, tossable feel in tight corners as the last Escape I drove, and while the suspension soaked up jolts, it would pogo in an unpleasant way on country-road heaves.

The 225/60R18 Michelin Primacy A/S tires, likely chosen for their low rolling resistance, carried some road noise into the cabin and became vocal at surprisingly low Gs—perhaps related to the chillier weather as much as the weight.

I charged the PHEV once more just to understand its boundaries. In EV Now it will accelerate to 60 mph in roughly 15 seconds—about double the time of hybrid mode—and go up to 85 mph on electric, according to Ford. I didn’t go there because acceleration is increasingly leisurely above 50 mph and downright tedious above 65 mph.

The looming reminder that the electric mode takes second stage is that any time you’re in EV Now mode, a message persists in the middle of the gauge cluster reminding you to press ‘OK’ on the steering wheel toggle to enable the gasoline engine. Just a press for the real thing; you know you want to.

This is a coarse-sounding vehicle in hybrid mode, too. The gas engine settles to a background thrum whenever you’re at cruising speed, but acceleration sounds deliberate.

“Auto EV” is essentially the default if you don’t deliberately enable “EV Now,” and it runs through the charge if you’ve got it—cycling the engine on well short of flooring the accelerator, though—and then runs as a hybrid. It’s exactly the way Ford’s previous Energi PHEVs defaulted, and it shows Ford’s cards here in positioning this model for people who want to plug in daily yet freely mix their gasoline and electrons—a dwindling lot, if you ask me.

While I personally haven’t driven a recent Escape Hybrid, a version of the same system really shines in the Maverick Hybrid and I’d anticipate the same for the Escape. in the Lincoln Corsair Grand Touring, Ford does have a plug-in hybrid system that powers the rear wheels with a separate motor—boosting overall power to 266 hp. It has the most charm potential of Ford’s PHEV tech, and we’ll be checking in with it soon.

The 2022 Ford Escape Plug-In Hybrid is offered in SE, SEL, and Titanium versions, starting at $36,685, $39,420, and $41,930—in each case a premium of more than $5,000 versus the Hybrid versions of each respective trim. Buyers of the Escape PHEV can claim $6,843 under the federal EV tax credit, however, making the plug-in version effectively cheaper—if you have the tax liability.

The whole Escape lineup has been marked up significantly for 2022. My test Escape Titanium Plug-In Hybrid wore a 2021 window sticker (slightly lower prices) and a bottom-line price of $43,025. That included, in addition to its extra-cost Rapid Red metallic paint, a $2,500 Titanium Premium Package that brought a panoramic roof, floor mats, and a wireless charging pad.

Changes for 2022 are minimal, but the most noteworthy one that applies to the test vehicle I had is that the panoramic roof is no longer part of the Titanium Premium Package—bumping the price of a comparable 2022 to $46,095, according to Ford’s build tool.

That top-of-the-line model I drove left me scratching my head mostly on the look and feel of it. In seating comfort, seat folding, and cargo space, it’s all it should be to be competitive. But for a vehicle with this price, it felt drab and basic. The cabin design doesn’t embrace rugged and upright, like the related Bronco Sport or Maverick—which is fine, but here it feels as if a nice, sporty car dash were lifted up high, adding a sea of plastic trims in the middle, the center console, door trim, and vent areas. Unfortunately those are most of the touch points.

A sweet spot around value, but makes no sense as tested

The base SE Plug-In Hybrid is where I see the deal to be—where the sticker price doesn’t overlap with (and be completely outclassed by) the Ford Mustang Mach-E battery electric crossover.

The takeaway: Getting the plug-in hybrid, at anywhere close to the same effective price as the hybrid—as it is for most buyers—is a good idea for those who can’t quite commit to fully electric. It should be a no-brainer, given the added potential for tailpipe-emissions-free driving. But it’s not as convincing as it could be.

Until then I feel conflicted about that decision point. And it would help if the Escape PHEV made clearer what it’s trying to be. To put it in Ford’s language, a little more commitment to “EV Now” would go a long way.