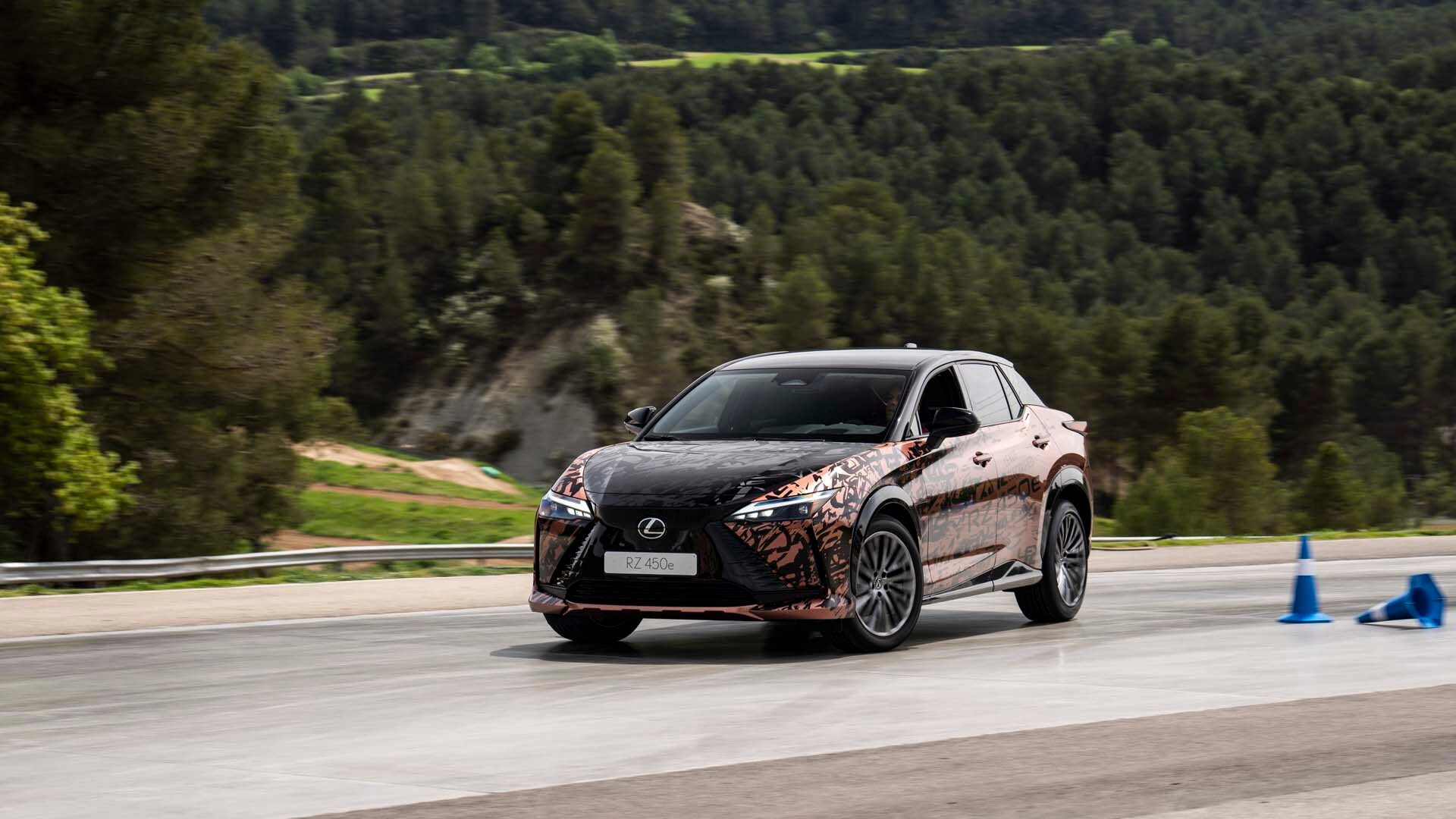 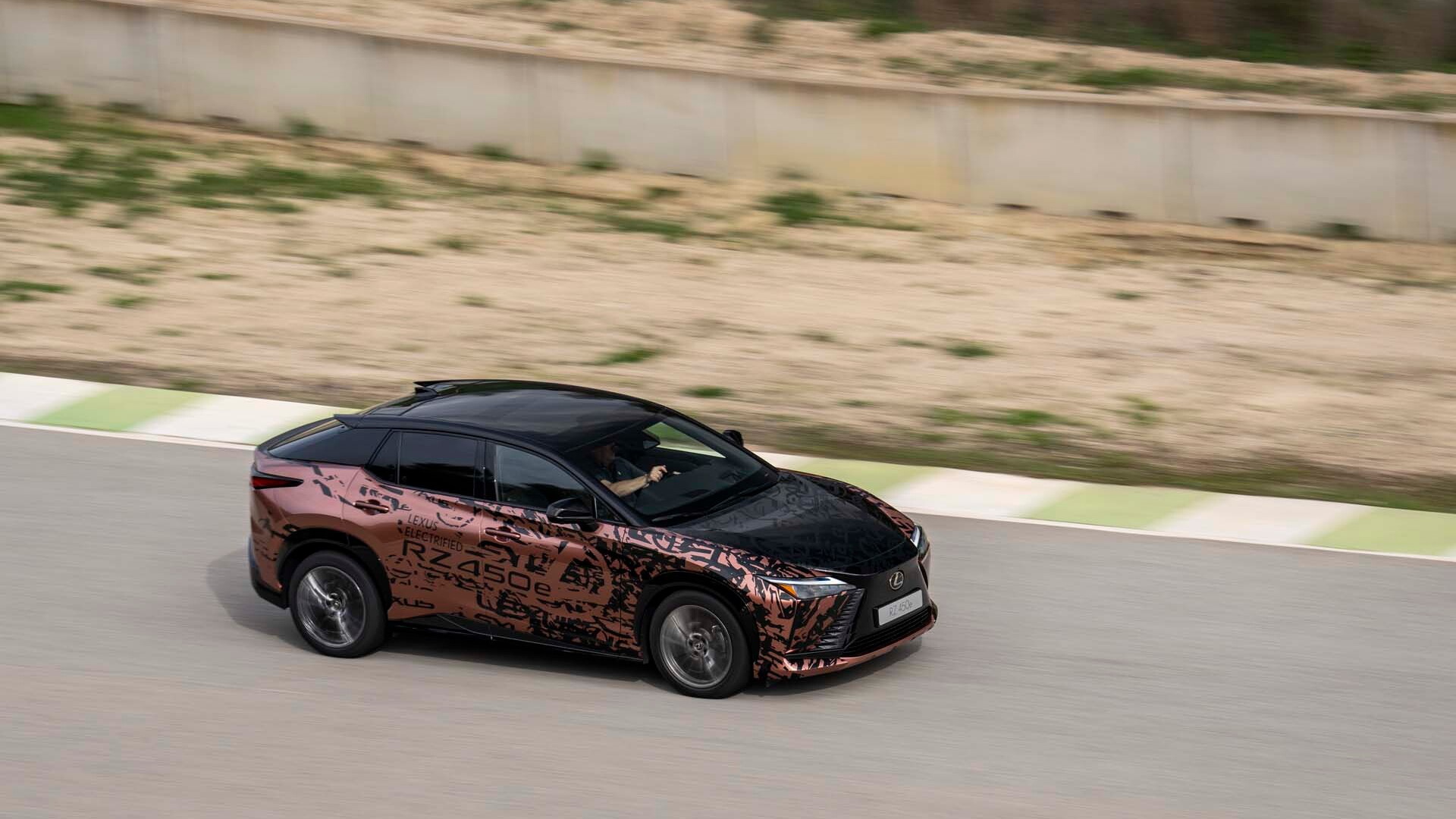 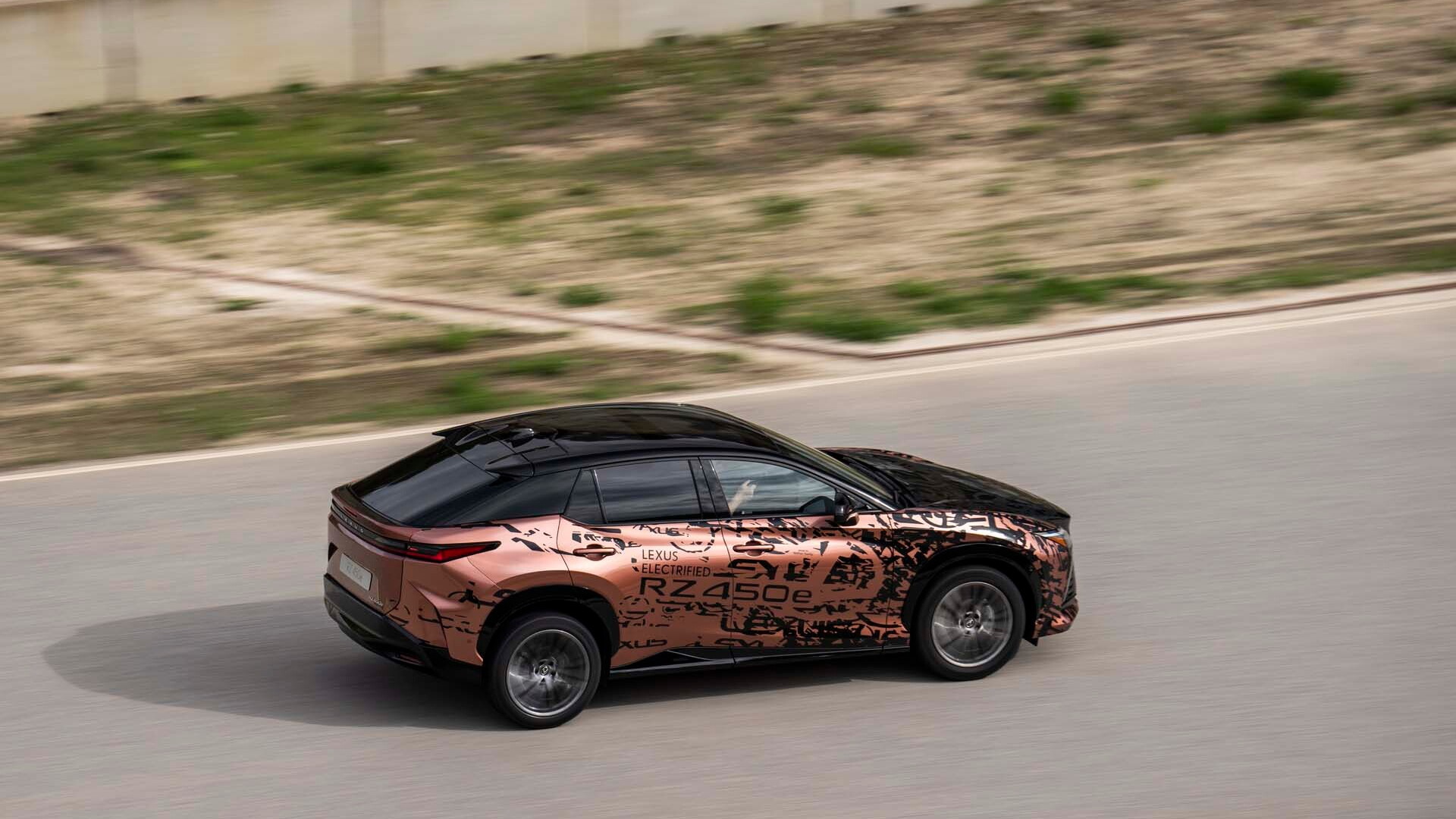 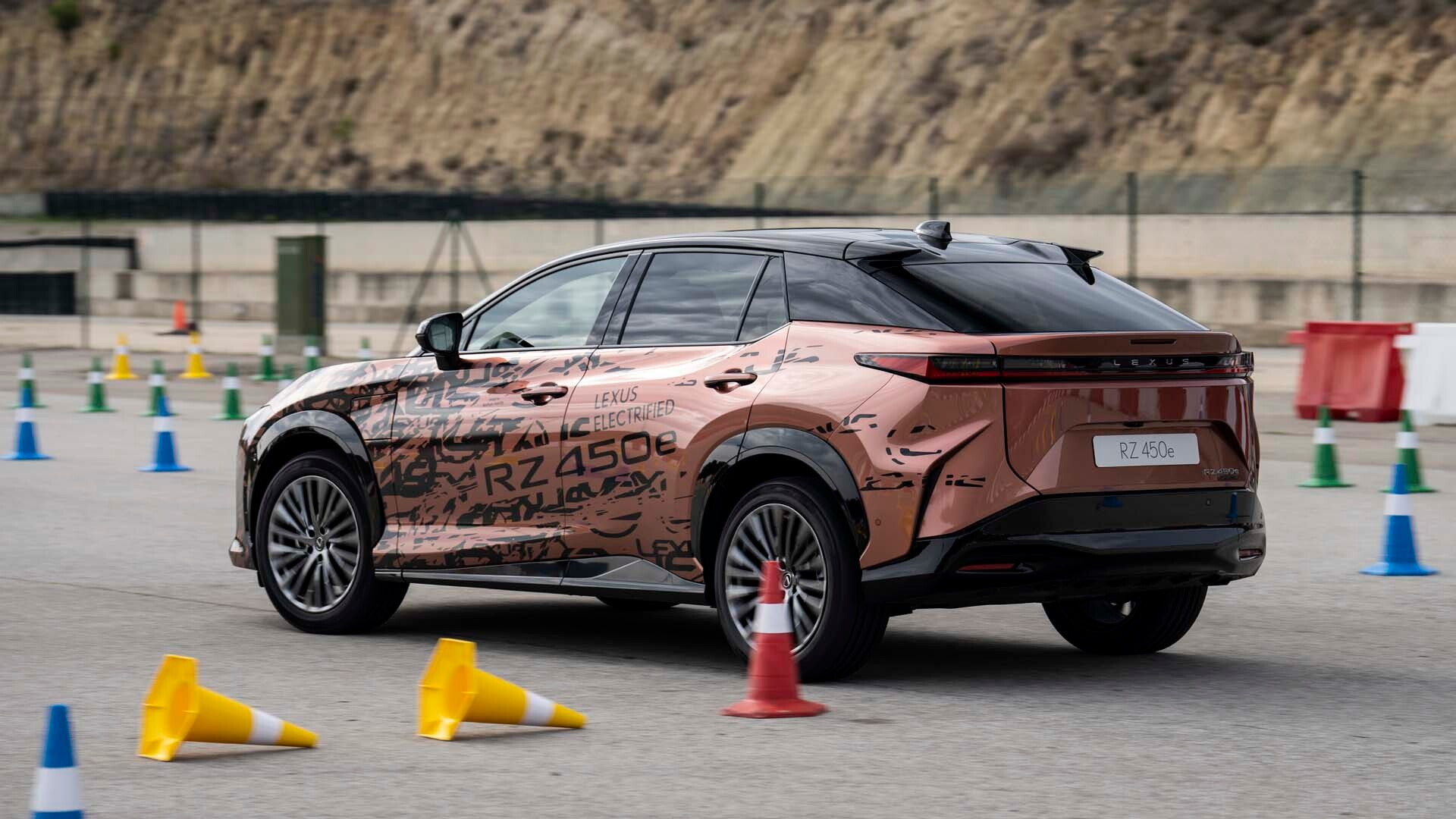 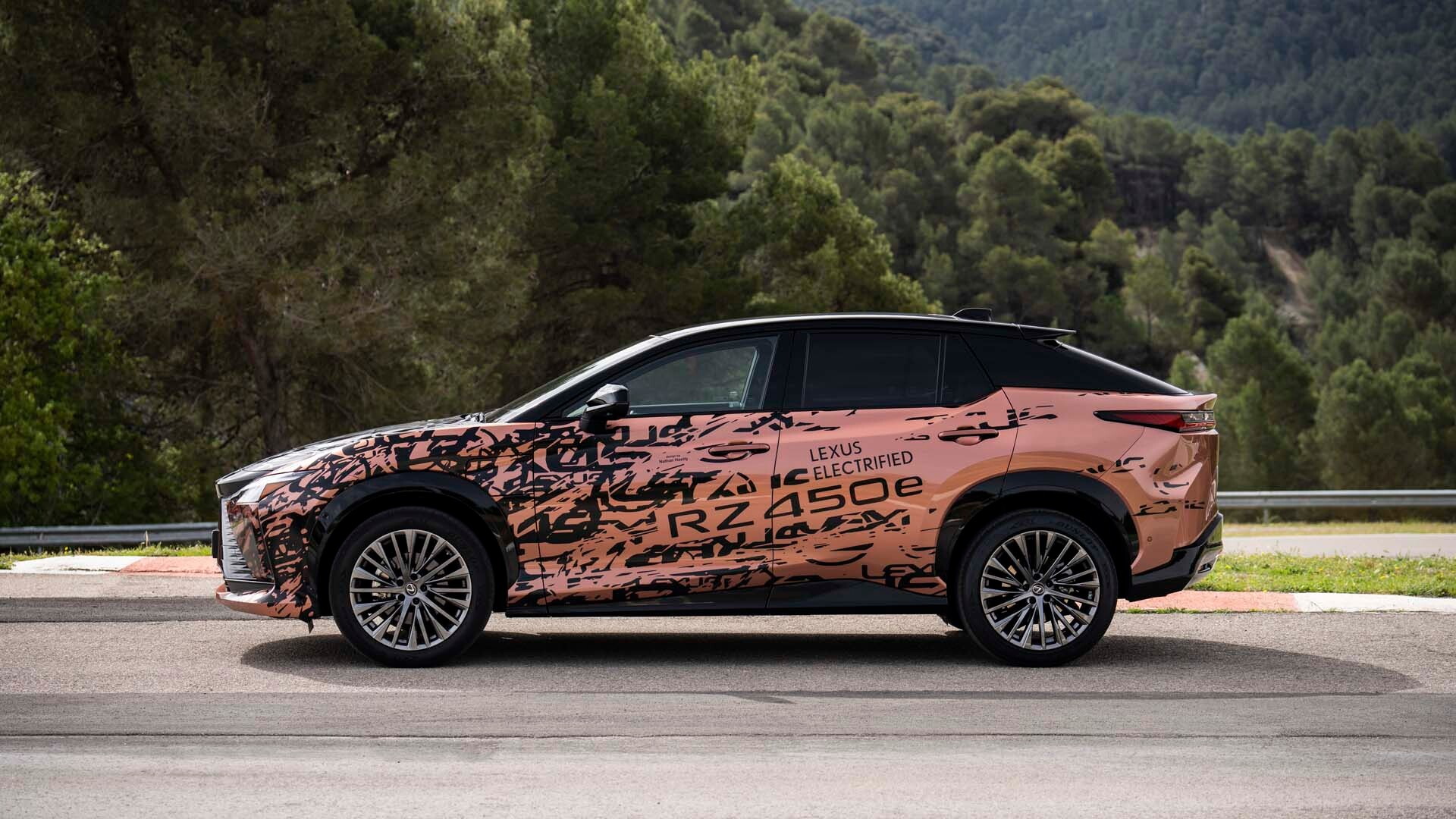 Rather, Lexus head engineer Takashi Wantanabe told Green Car Reports, the RZ 450e “was developed mainly with China in mind”—which explains its range, estimated to be 225 miles with the standard 18-inch wheels or about 200 miles with the optional 20-inch wheels.

That’s not on the short side for the Chinese market, Watanabe noted. But anyone expecting the 2023 RZ to compete with the likes of Tesla or even the Genesis GV60, Kia EV6, or Hyundai Ioniq 5, there could be some different first prejudgments.

That said, the RZ does have some standout tech—a lot of it, including a yoke—and Lexus invited GCR to Barcelona, Spain, to drive a few prototype RZs on the Parcmotor Castelloli race track to learn about the automaker’s first mass-market electric car bound for the U.S. and experience its steer-by-wire system.

Turns out maybe the yoke is not a joke.

Digging in on specs

We were unable to get any insights into the RZ’s efficiency or range as our testing of two prototypes was limited to some laps on a race track and a parking lot handling course.

The Lexus is more powerful than the Toyota despite having the same hardware (right down to the inverters) with a more powerful 150-kw motor up front and same 80-kw motor in back. Total system output is rated at 313 hp, though that’s a global figure and final U.S.-specs have not been set yet.

Wantanabe said the RZ’S 400-volt electrical architecture is capable of fast charging at a rate of up to 150 kw. Fast charging is said to take the battery from 0% to 80% state of charge in 30 minutes. All charging figures were said to be global and U.S. Lexus spokespeople would not comment on U.S. specs at this time.

While there are four levels of regenerative braking in the RZ the systems weren’t fully online in the prototypes on hand. Regenerative braking will only come from lifting off the accelerator and the brake system is friction-based only. There will be no one-pedal driving mode according to Wantanabe, as philosophically the company wants to keep the operation of the brake pedal and accelerator fully split.

RZs will have four drive modes including Normal, Sport, Eco, and Range. The first two are what one expects, but the Eco and Range mode will be confusing for many. Eco mode will only change the auxiliary systems such as the climate control. Range mode will also make changes to the powertrain to extract the maximum range from the battery pack. No modes were enabled or functioning in the two RZ prototypes tested.

How does the RZ drive?

The suspension was soft and body roll was abundant while cornering. The two prototypes were rolling on 20-inch wheels wrapped in Euro Michelin Pilot Sport 4 SUV tires, which likely aren’t production- or U.S.-spec. But grip around corners was surprisingly good.

Changes under the skin to the RZ from its Toyota BZ4X sibling include extra stiffening of the steering column, structural points in the front and rear, and upgraded front radiator supports. The suspension geometry carries over from the Toyota but the shocks were swapped out and the springs have a revised tune.

Head of product planning and marketing for Lexus Europe Bart Eelen told GCR the drive system is designed for understeer and to push in corners until pushed hard to oversteer. The power split defaults to a 60:40 split but is capable of up to a 0:100 split in Range mode to eke out every bit of efficiency. On the track we were told in corners it defaults to a 75:25 split and can shift to a 20:80 split. In every high-speed corner the RZ pushed and understeered—as it should—although with effort I was able to get the power to shift with more going to the rear, eventually.

The cars had already spent the first half of the day being beat by journalists on the track and by the time I slid behind the wheel they were on their third round. The battery packs had just been fast-charged to about 50% (there’s no preconditioning setup for the battery), and were likely not at their peak performance.

All these factors likely contributed to the feeling of the RZ simply being not as quick as expected for its more than 300 hp. Even from 0 to 30 mph the RZ felt somewhat underwhelming. Lexus wouldn’t disclose 0 to 60 mph times, and I would be reluctant based on my experience and conditions to guesstimate.

Elephant in the room: Yes, the yoke is real

The Lexus RZ will offer a yoke instead of a steering wheel, as part of a steer-by-wire system. But it won’t be called a yoke. U.S. Lexus representatives said a final term hasn’t been chosen, and the timeline for the feature is yet to be decided.

Unlike Tesla’s yoke setup, which just slaps a yoke in the place of a steering wheel (which is a terrible and simplistic idea) the Lexus system uses a new steer-by-wire design with no mechanical connection to the wheels. The steering ratio is infinitely variable and only requires 150 degrees of rotation lock-to-lock.

In short, it’s impressive and a mixed bag.

At higher speeds the system has a slower ratio, though still variable, and at lower parking-lot speeds the ratio gets much quicker. The ratio doesn’t transition much during cornering or while steering inputs are applied.

At higher speeds, with hand placement at 9 and 3 on the yoke and a ratio that felt more race car than street car, the yoke felt at home.

But at slower speeds the steer-by-wire and yoke setup is more flawed. The ratio at slower speeds picks up dramatically with quick reactions that are linear, but only a handful of laps didn’t give us enough to truly get comfortable with the setup and quicker ratio. It also felt weird to require two hands that never move from the 9 and 3 steering position to navigate a sharp corner.

The system is also clearly still at a development stage, and I experienced a repeatable issue where at full lock with moderate throttle while going around a corner the yoke would twitch as if mixed signals were being sent. Lexus steer-by-wire engineer Masayoshi Kobayashi said the system’s software is still being worked on. This was an extreme situation that would likely only be induced possibly during an emergency maneuver or situation.

We look forward to getting more time with the yoke and testing it in some real-world situations once development is finished.

Exterior styling echoes the LF-Z Electrified concept from 2021, complete with an unadorned panel in the shape of the spindle grille Lexus applies to its internal-combustion cars and a blacked-out roof.

Inside the RZ looks a lot like an NX. The focal point, aside from the yoke when equipped, is a 14.0-inch touchscreen infotainment system canted towards the driver. Cars equipped with the yoke have a gauge cluster that sits further away from the driver and is mounted 1.5 inches higher than the standard digital cluster. At 5-foot-10-inches I was able to comfortably sit behind myself, and cargo space looked similar to that of the 27.7 cubic feet found in the Toyota BZ4X.

The RZ will be the first Lexus product without the automaker’s Team Mate hands-free driver assist system (which is only offered on the LS 500h) to feature a driver attention monitoring system. The infrared cameras are integrated nicely into the steering column, much better than GM’s Super Cruise nub and even slimmer than Ford’s Blue Cruise setup. Unlike pretty much every other system on the market, the cameras will watch the driver’s eyes at all times regardless of whether the cruise control system is active. If for any reason the driver isn’t paying attention to the road with their eyes, and refuse to or can’t pay attention when prompted, the system will slow the car to a complete stop, put the hazards on, and call emergency services for help.

When does the RZ arrive in the U.S.?

With production set to begin in November U.S. reservations will open on November 7. Lexus representatives said electric car enthusiasts will have something to be extra thankful for this year as sales will commence on Thanksgiving, November 24. Pricing hasn’t been set but Lexus representatives said the RZ will cost more than its platform mate, the 2023 Toyota BZ4X, which costs $43,215.

The first year of RX production is slated for 4,000 RZs to reach the U.S. market. But when pushed, executives noted that plans call for 2,700 RZs to be built a month globally with half going to China, Europe getting about 600, and the U.S. getting about 400 to 500 units a month once production ramps up. That would equate to about 4,800 to 6,000 RZs in the U.S. a year.

To compare, that’s a tiny fraction of sales levels for the Lexus NX or RX, or for the Tesla Model Y. Is the RZ intended to be anything more than a token offering for the U.S.? Not even the yoke has steered us to an answer quite yet.

Lexus paid for airfare, hotel, and meals so Green Car Reports could go to Barcelona to drive RZ prototypes and bring you this first-hand report.