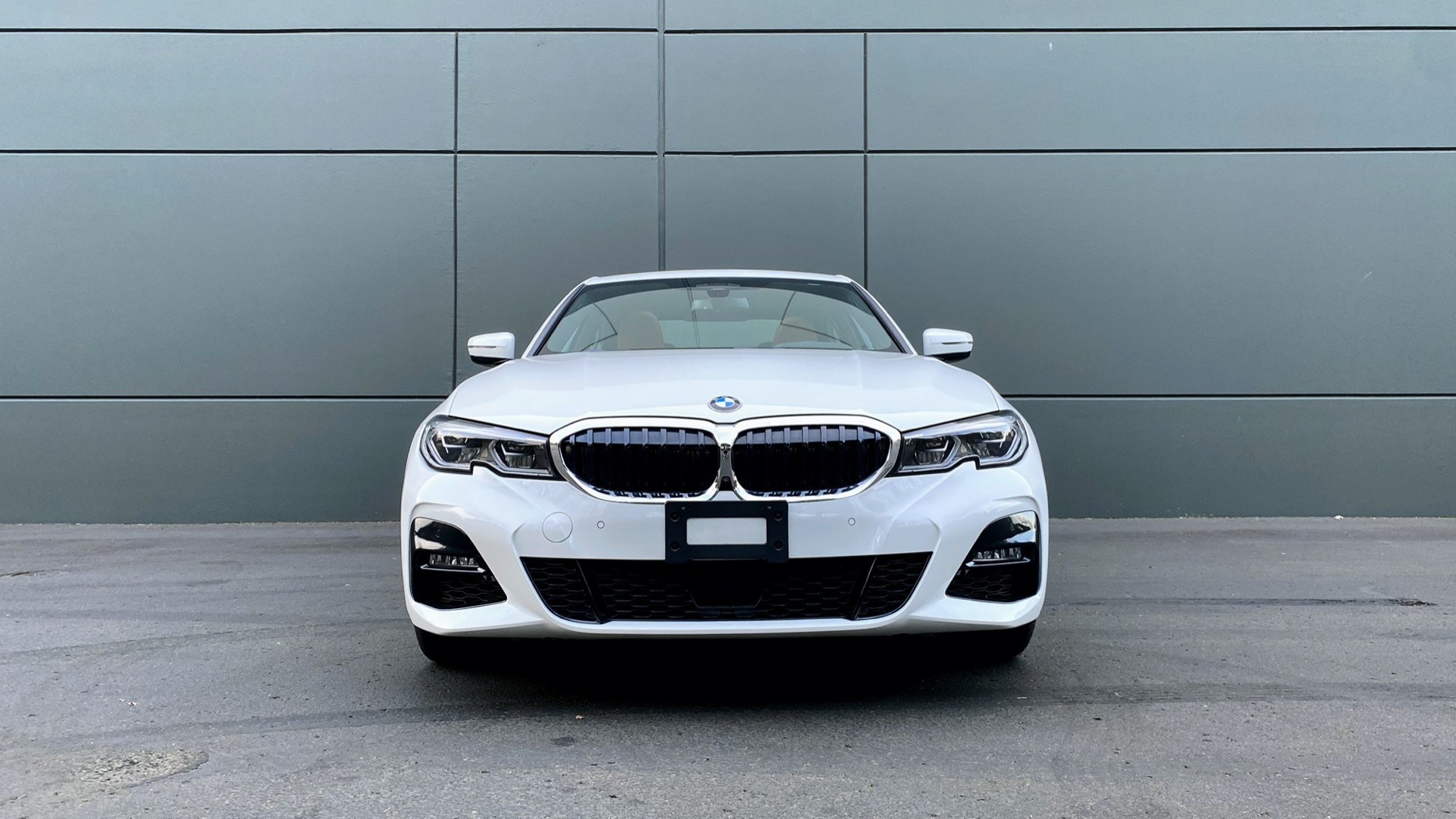 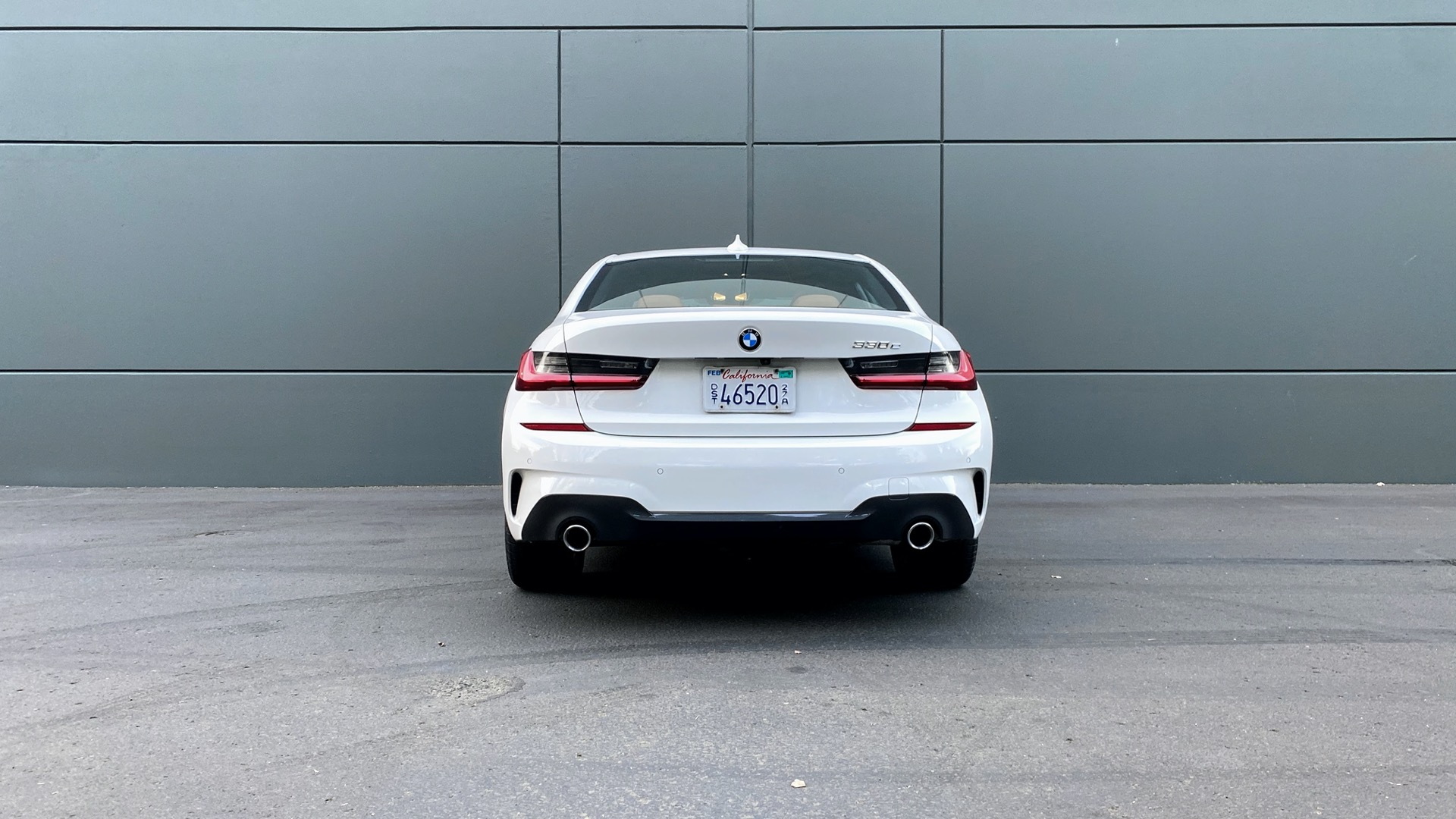 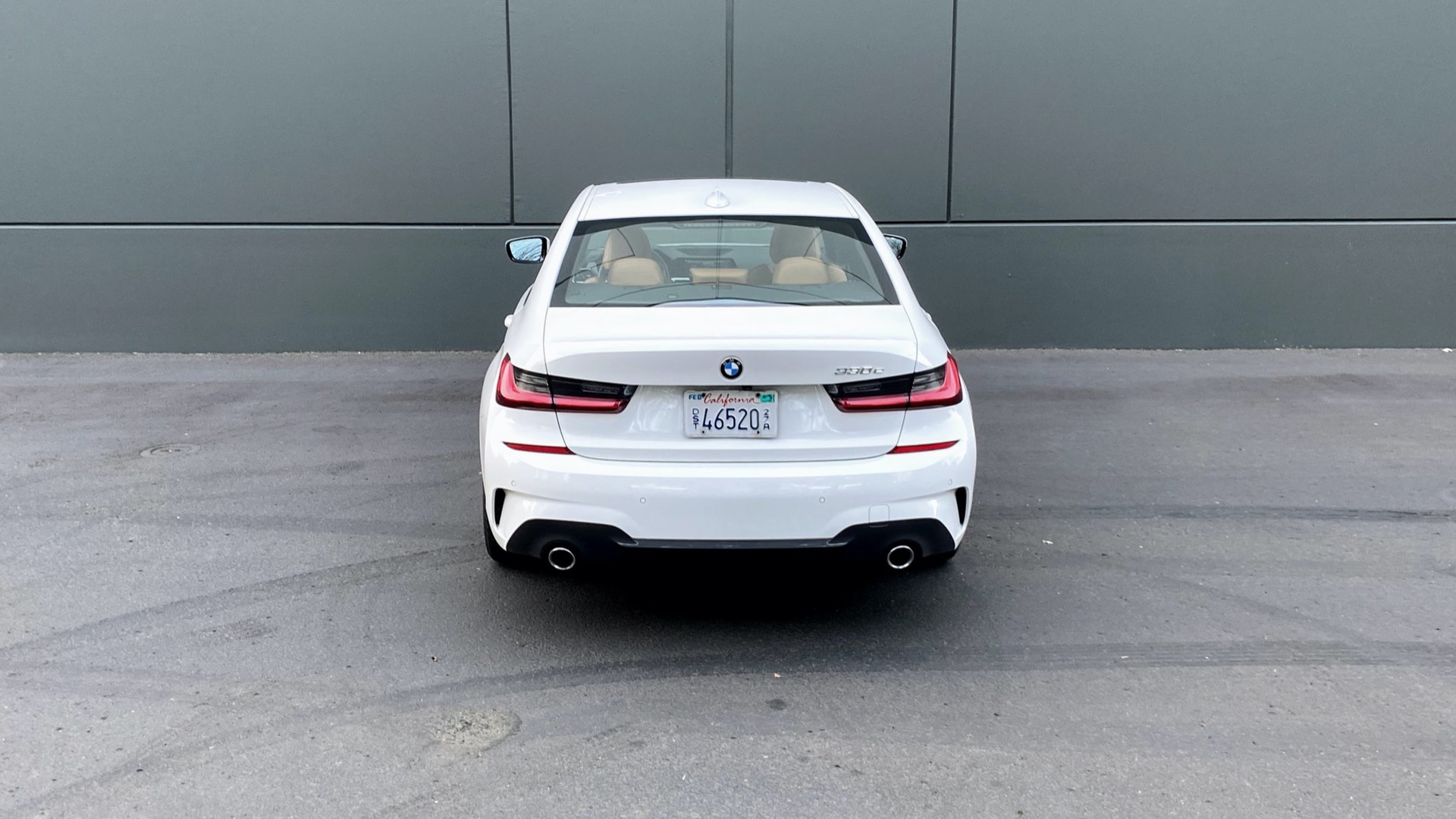 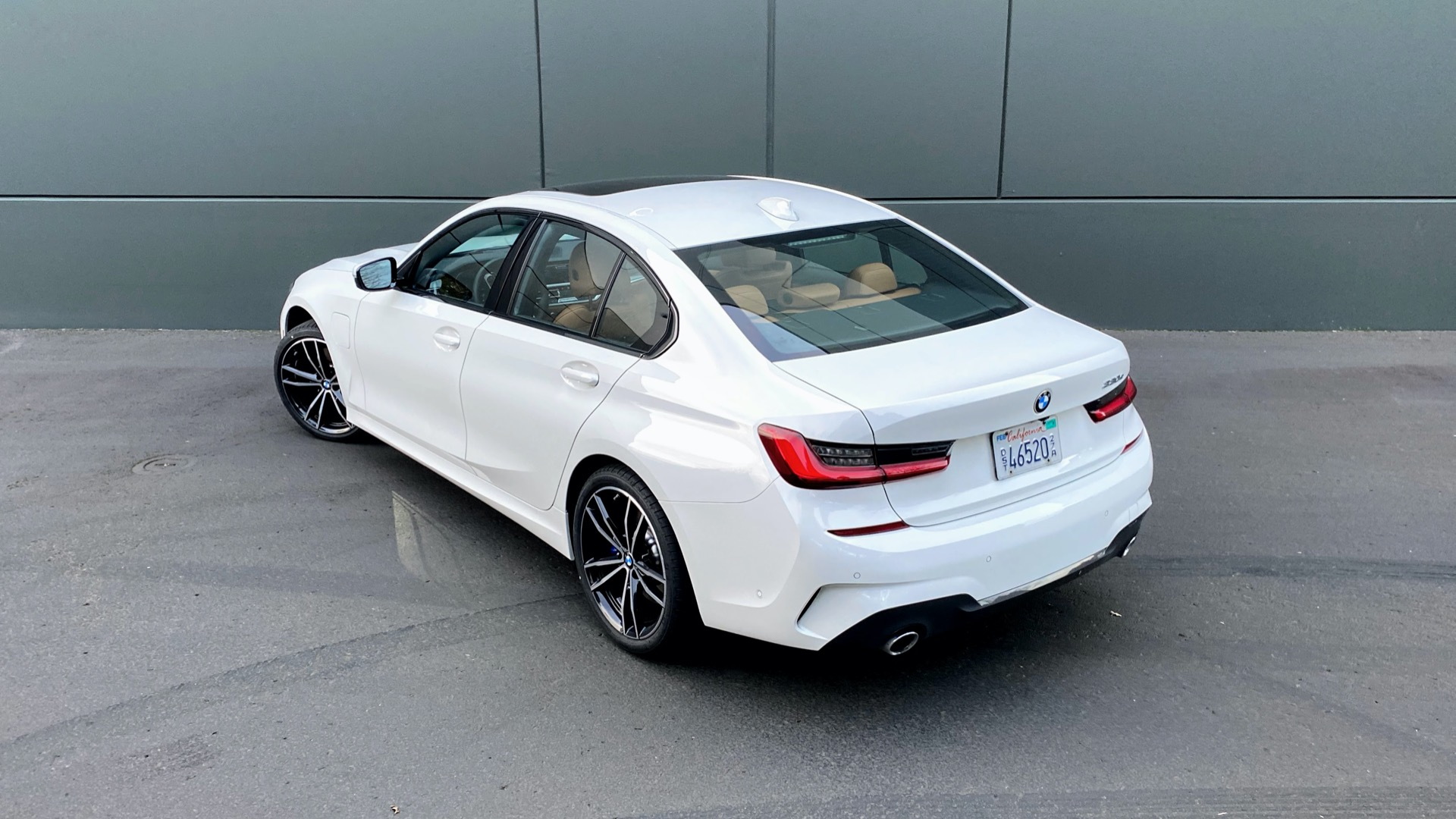 “OK Boomer,” jeered BMW last November, in a social-media ad for its first fully electric SUV, the iX. It was a reference to an already outdated meme that feels so last-decade now.

It’s no surprise BMW faced a lot of backlash over the jab, as the Boomer generation made BMW what it is today. The brand once owned the sport-sedan field with the 3-Series. In the 1980s and ’90s—and perhaps into the ’00s—it was an iconic calling card for young professionals and conspicuous wealth, a benchmark that could outperform most other four-doors at its price, in a form probably unlike anything the parents of those Boomers had driven.

I spent a week driving what carries the torch for the BMW 3-Series as an innovator—the plug-in hybrid, badged the 330e—and I could neither warm up to this tech-forward 3er nor get the Baby Boomer associations out of my mind.

The 3-Series has evolved in fits and starts, and by the proportions, layout, and seating position, the latest G20 version marks a return to sport-sedan form. The all-around sense of communication with the car is at its best since the E46 3-Series of the early ’00s. But I regret to say it’s probably at its most awkward—or at the least, unexpectedly sterile—as the 330e. It drives heavy, and it only feels like a sharp-and-focused sport sedan in Sport mode.

The experience vs. the numbers

Considering the 330e with the hopes of having the best of both worlds in performance and efficiency, including  all-electric range? Don’t try to throw too much logic at the 330e. It can feel like a misguided compromise, even though it is a step ahead of the previous 330e, thanks to a bigger battery.

The 330e has a 12-kwh battery pack and is rated at 23 all-electric miles, which is a big step forward vs. the previous generation 330e’s 14 electric miles. The 2021 330e is rated at 28 mpg combined (25 mpg city, 33 highway) in hybrid driving without factoring in a charge. BMW has revisited its plug-in hybrid systems across its portfolio, with similar improvements, over the past model year or so.

Under the hood sits an electric-augmented version of the now-typical BMW layout: a longitudinal inline engine, mounted as far back as possible, with an 8-speed automatic transmission. In the 330e, that engine is a 2.0-liter turbo-4, detuned to 181 hp, with a single 111-hp electric motor to act at the input end of the transmission, and the engine can be clutched out when needed. Total system output is up to 288 hp and 310 lb-ft of torque, with the top 40 hp available in a 10-second “Xtraboost” kick.

At full boil, the 330e will dash to 60 mph in 5.6 seconds, according to BMW, but in real-world driving it seldom feels downright quick for one main reason: lag. The transitions of the hybrid system are now beautifully coordinated; the electric motor helps shifts feel seamless, and it often lets the car quietly churn ahead without dramatic downshifts. But crack the accelerator to the floor in the Comfort or Eco Pro modes and it feels bewildered as it sorts out gears, motor boost, and perhaps an engine start. Running in Sport mode is the alternative, but it clearly runs the engine more at the expense of efficiency.

Great electric range and mpg with a light right foot

So how does this solution work for electric range and overall mpg? I topped off the charge and ran in MAX eDrive (vs. AUTO eDrive), which showed me that I could only access the first 60% of power without starting the engine. In a highway loop, ranging mostly between 60 and 70 mph, the engine fired up at 19.6 miles. Then after another charge, I followed a route I’ve done in many PHEVs that features a couple miles of surface streets, then 8 miles of 65-mph freeway driving, then 8 miles on a 50-mph road with occasional stoplights, then the rest of the route in a gentle 30-mph stop-and-go. In this loop I managed to go 26.5 miles on electricity.

Driving the 330e in electric mode, while keeping the gas engine off, is a strange out-of-BMW experience. Acceleration to 60 mph while keeping it in the electric zone is somewhere in the 14-second range by my count, or significantly more than that with a slight uphill grade on one entrance ramp.

After using up all the plug-in charge, I headed out to the highway and in a gentle 47 miles of running between 60 and 75 mph, the trip computer indicated I averaged more than 38 mpg. In a separate errand, over another 48 miles of mostly highway driving, with no plug-in charge but some more spirited acceleration added to the mix, I averaged 28 mpg.

The 3-Series doesn’t look like a compact car anymore on the outside. At 185.7 inches long, it’s just four inches shorter than a Jeep Grand Cherokee. Yet much of that length goes to the hood. Narrow footwells make it feel rather tight in front, and in back, with the front seats adjusted anywhere close to comfortable for my 6-foot-6 height, head and leg room are very limited.

The 330e I drove included the $1,400 Dynamic Handling package, which adds M Sport brakes with blue calipers, the Adaptive M Suspension, and variable sport steering. It also had the M Sport Package, which brings a long list of trim upgrades, larger wheels with performance tires, extra aerodynamic pieces, sport seats, and an M Sport steering wheel. Ride quality was on the firm side but superb all around, and while the 330e felt easy to plant into curvy-road esses, the default steering boost level felt too light, exaggerating the heft of the car. In all, the 330e feels heavier than its 4,039-pound official curb weight, which I thought I’d never say about a 3-Series.

An easy upsell by the numbers, if not the test drive

The 330e starts at $45,545, although my test car arrived with quite the load of options, bringing the total to $59,645. It included $1,450 soft-feeling Cognac Vernasca leather—the most seductive part of the car—plus the $2,600 Executive package (heated steering wheel, heated front seats, a head-up display, adaptive LED headlights, and active blind-spot detection). The Executive package also included the Active Driving Assistant Pro system, for lane-centering help on the highway, and the test car also had  the $1,700 Extended Traffic Jam Assistant and $700 Parking Assistance package. Ambient lighting ($250) and wireless charging ($500) were among the a la carte extras.

The way that BMW has priced the 330e is bound to find favor with more customers. With eligibility for a $5,836 federal tax credit, the starting price tucks under $40k.

While the 330e might make sense for a timid all-electric crawl through city centers in Europe, followed by triple-digit-mph cruises on motorways, it’s still a head-scratcher for America. The 330e feels more distant from a light sport-sedan formula than ever.

With the latest 330e, BMW has made the case for why the 3-Series should have more battery, but it still gives the electric motor a distant apprenticeship. The priorities simply don’t work as well here as in the plush, poised BMW 745i we drove last year or the 530e we drove even more recently—review coming soon.

Throwing out this layout and starting over with something that feels sharper and more electric would be a better solution for the 3, whether it’s for the heritage the Boomers identify with or not.

That’s what the upcoming, fully electric BMW i4 may do, even with its additional 500 pounds of curb weight, with a sharp, all-electric propulsion system that BMW says will deliver similar 0-60 mph times in base form.