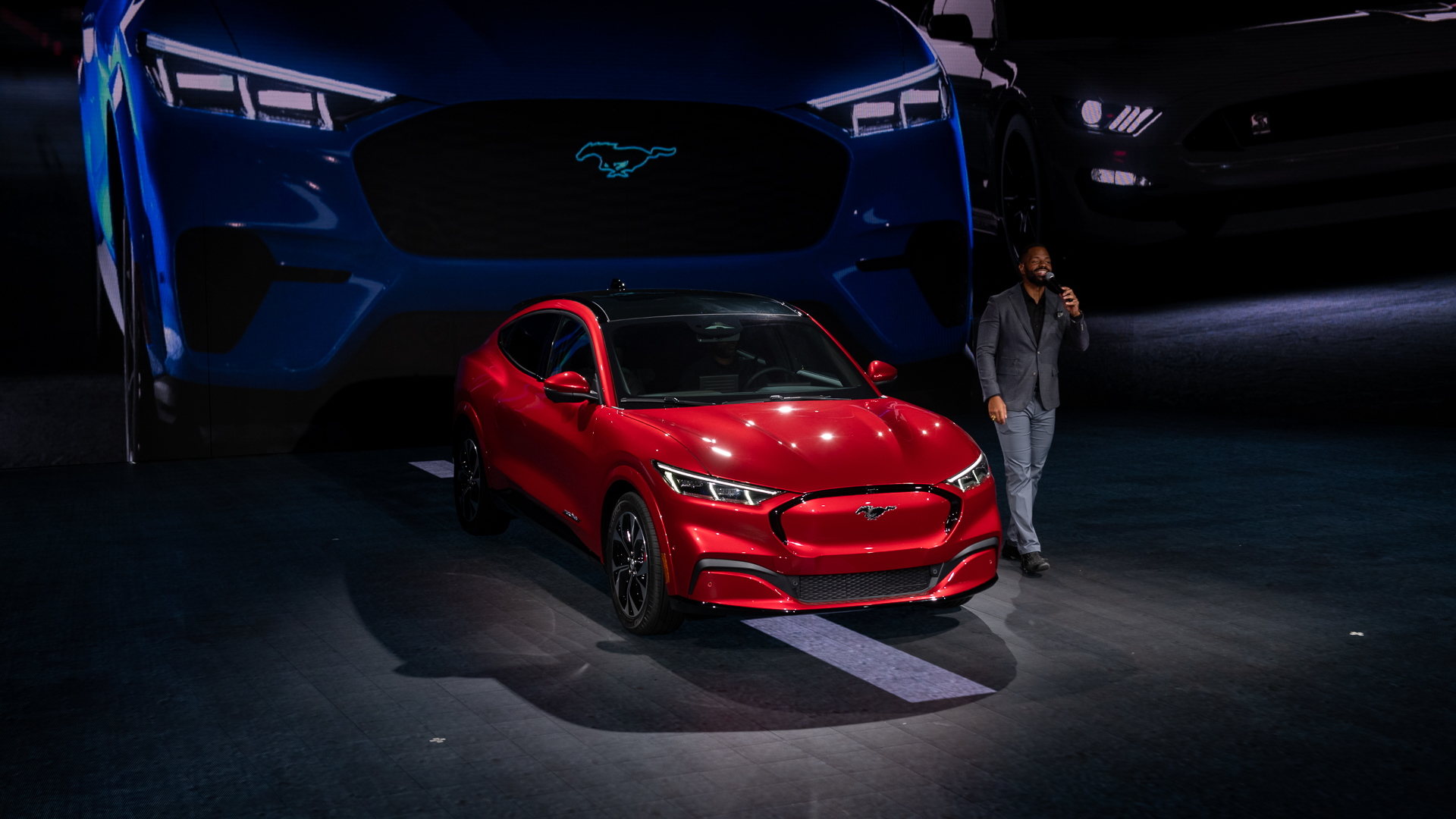 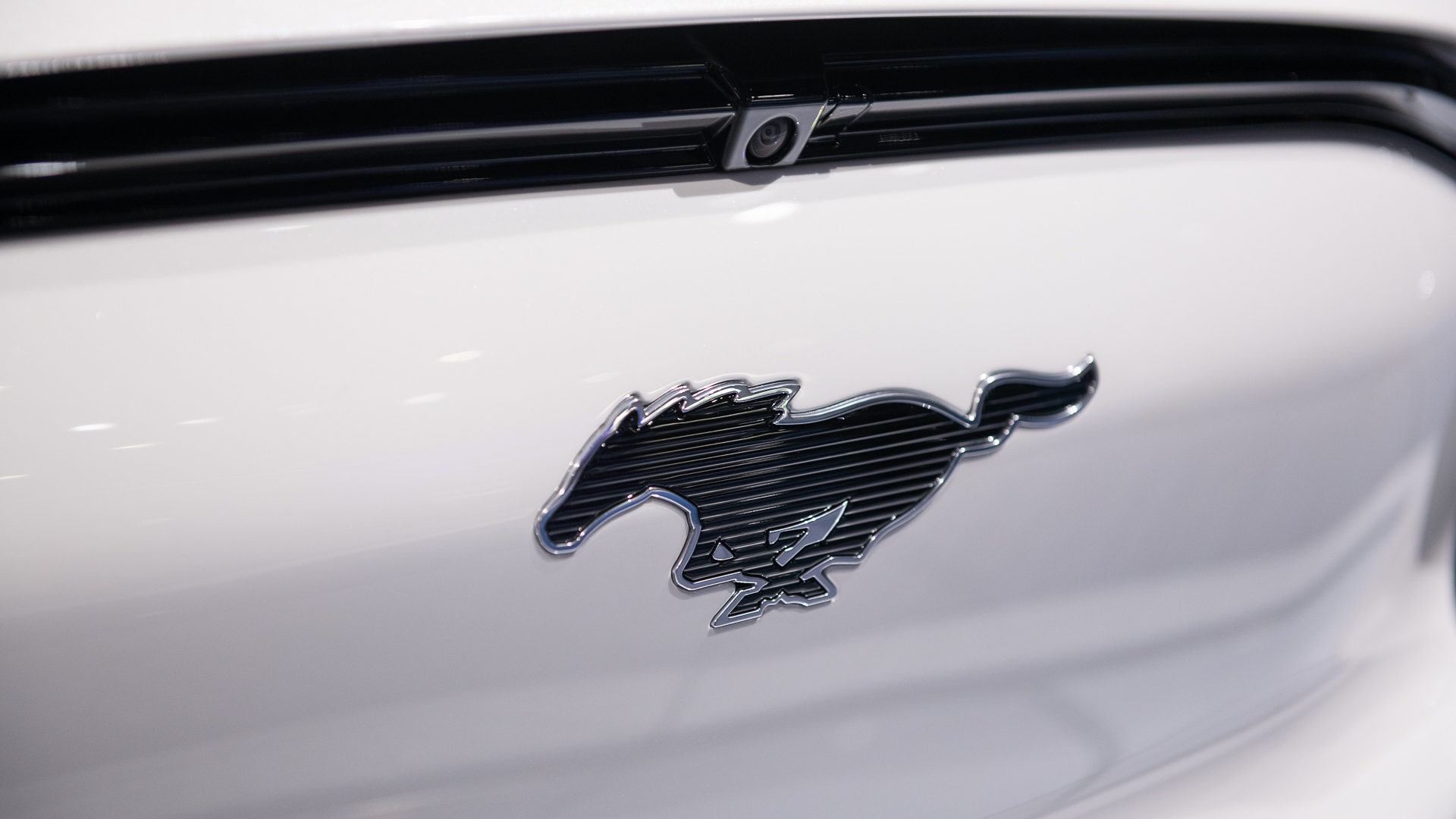 It will offer two battery capacities, rear- or all-wheel drive, and a top EPA-rated range projected at 300 miles or more for at least one version. Most important of all, it wears the Mustang pony—and Ford asserts its style, performance, and élan make it every bit a Mustang, albeit the first one to have an all-electric powertrain, four doors, all-wheel drive, and an SUV body style.

I had the chance to interview almost a dozen members of the Mach-E product team last month at an invite-only preview at Ford headquarters in Dearborn, Michigan. They explained at length how the new electric Mustang came to be.

While it may take Ford some time to convince a skeptical electric-car world of the new Mustang’s bona fides, its goal is a stretch: The Mach-E is intended to be nothing less than Ford’s “new hero product.”

A secondary goal, we learned, was to “keep the Mustang brand relevant” to a new generation of buyers for whom V-8-powered two-door coupes simply weren’t relevant. Especially in China, the company’s research showed, young buyers expected big touchscreens—the Mach-E’s is up to 15.5 inches—intuitive controls, and complete integration with their digital life.

But the path to developing the Mach-E was hardly straightforward. Ford knew it had to develop a new, all-electric vehicle to replace its outdated Focus Electric compliance car. When Jim Hackett followed Mark Fields as CEO in May 2017, he ordered a review of all new products. The proposed electric car then under development wasn’t deemed good enough.

“Winning will not be driven by compliance cars,” Ted Cannis told us in Detroit. He was named Ford’s global director of electrification in October 2017, and is a key leader of the team that developed what became the 2021 Mustang Mach-E. “Electric cars are improved, but they’re not aspirational—they’re not, ‘Gotta have it’ cars.” He freely included the Focus Electric in that group.

For its new electric car, the company decided to leverage its experience—in trucks, SUVs, and performance. And it took the risky step of leveraging an iconic nameplate, then ensuring that an electric car with the Mustang name would actually offer Mustang style, performance, and pizzazz.

It took that path because research by the newly formed “Team Edison” showed electric-car buyers wanted highly differentiated, emotive vehicles that kept them connected to their digital life. All those qualities, Cannis said, played to the company’s strengths, from Mustang GT performance and its raft of successful SUV models to its pioneering Sync system—an entirely new generation of which will hit the market in the 2021 Mach-E.

The team started with an in-process design for a compact electric car developed as a compliance car. It offered hybrid, plug-in hybrid, and full electric powertrains, but the design didn’t wow anyone, said Cannis and electric-car design head Jason Castriota.

It simply wasn’t a car buyers would crave. And the project team—initially dubbed “Team Edison”—had to fix that, quickly, knowing it was to be built on one of five core Ford platforms for the 2020s.

They lengthened the wheelbase, raised the nose to echo the aggressive Mustang front end, and pulled the windshield pillars back to provide the long-nose look of the sports coupe.

The designers also used every visual trick in the book to give it the fastback appearance that defines a Mustang. The Mach-E is still a crossover, with four doors and a tailgate, but the roof of every version is finished in gloss black. Especially in certain colors, its body-colored roof rails draw the eye to the fastback shape while the black roof above them visually recedes into the background.

The redesign to “add Mustangness” was done in record time, Cannis said. It started in late summer 2017 and was signed off less than a year later.

While it was always going to be “Mustang-inspired,” the debates within Ford were lengthy, passionate, and highly personal for members of the Mustang team and the EV folks in Team Edison. (He took pains to underscore there was considerable overlap, especially during the suspension tuning and development of the higher-performance versions.)

Only after the proportions were right, the performance image was sufficient, and the car had been proven both internally and in track testing, Cannis said, did Ford execs take a deep breath.

And that must have been just before Ford started speaking more openly about specifics for the Mach-E.

The 2021 Mustang Mach-E will offer two battery capacities, 75.7 kwh and 98.7 kwh, with EPA ranges from roughly 230 miles to a long-range model that’s projected to just clear 300 miles. It uses lithium-ion pouch cells, with 96 modules containing four cells apiece. The wide-flat battery pack sits under the cabin floor, with liquid plates at the bottom providing both cooling and heating as needed.

It’s a rear-wheel-drive vehicle in base form, with the drive motor between the rear wheels. All-wheel drive is optional, and the highest-performance Mustang Mach-E GT model will have AWD as standard for its increased traction and faster acceleration. The GT will come standard with 20-inch alloy wheels, and its front design will be visually differentiated from all other Mach-E versions. MagnaRide will also be offered on the GT—although the GT will hit the market a few months later than the rest of the Mach-E lineup.

The suspension tuning benefited extensively from Ford’s Racing Simulator in North Carolina, and the entirety of the Mach-E’s suspension had to pass muster with the engineers developing the suspension of the next-generation Mustang coupe family before it could be signed off.

The power electronics and charging gear sit up front under the long hood. There’s also a small front trunk that designers were proud to point out fits a carry-on hard-shell rolling luggage bag. That compartment includes a drain, so it can be filled with ice to act as a cooler at tailgaters.

The portable charging cord that comes standard with every Mach-E will provide pigtails for both 120- and 240-volt charging. Separately, an optional home charging station operates at up to 48 amps, adding up to 22 miles of range per hour. Amazon will provide installation services through local electricians.

The electric Mustang’s fast charging hardware operates at up to 150 kilowatts, Ford confirmed, permitting a recharge from 10 to 80 percent of battery capacity in 45 minutes. But given that Ford has said that it can recover just 47 miles in 10 minutes at a 150-kw charger, its peak rate may potentially be limited to the 100- to 125-kw range.

For on-road charging, the FordPass system bundles use of multiple large national charging networks. Whether a Mustang Mach-E driver stops at Greenlots or Electrify America, for instance, their payments for charging will be aggregated into a single bill from FordPass. The car’s navigation system will route the driver to charging sites en route where necessary, and show availability of individual stations when that information is available.

Ford declined to discuss production volumes, but the Mach-E battery team said the pack had been “designed for high-volume production.” Make of that what you will.

The Mustang Mach-E will offer over-the-air updates, based on research that showed buyers wanted their digital appliances and their cars to improve continuously. In the same vein, it will meet the needs of users who want to use their suite of apps from their own phones, he said. Early on, the dedicated group of infotainment designers known as Team Menlo asked, “Why can’t our car have, for instance, OpenTable for restaurant reservations if users want it?”

The version of Sync that pioneers in the Mustang Mach-E will be the first to “learn” from each user’s actions, so it can start to offer predictive options for information and services. Each separate driver will be identified through a cellphone or unique keyfob, so the vehicle will automatically provide that driver’s preferences for entertainment, instrument display, seat and mirror settings, and a host of other adjustable features.

Ford’s user research also found that passengers disliked having their phones cabled to the car: they wanted to hold them in their hands without a tether. So the company lets smartphones connect to the car through Android Auto or Apple CarPlay over the car’s built-in wi-fi, even if the device is sitting on the wireless charging pad in the console.

As of the time you read this article, the company is accepting online reservations with a refundable $500 deposit to buy a Ford Mustang Mach-E electric SUV. In what may have been a quiet dig at Tesla, we were told: “There’s no VIP super-secret list to get one; it’s first-come, first-serve.”

The Mach-E will go into production next year, as a 2021 model. More than 2,000 of Ford’s 3,000 U.S. dealers have signed up to carry it. That requires a commitment for service training, special equipment, and of course installation of charging gear both for service technicians and the public, though as usual, the carmaker can’t tell the dealers to make their chargers accessible.

We will add pricing to this article as soon as possible after publication.

The company is keenly aware of the challenges that remain. Hurdles to mass adoption of battery-electric cars included battery costs, which continue to fall. Lack of multiple vehicle types was another: buyers looking for a compact crossover that happened to be electric had no practical choices available. Both a lack of infrastructure (Michigan remains particularly bad in that regard) and a lack of public awareness of the charging sites that do exist are a further hurdle.

But Ford knows the demand for electric cars is coming. Today, it said, 1.4 percent of U.S. sales are cars with plugs; in Europe it’s 2.7 percent. By 2025, it believes that share will have risen to 14 percent globally—of which fully 40 percent will be battery-electric vehicles.

That same year, more than 100 separate vehicles on sale in the U.S. will offer a plug, whether they are plug-in hybrids or battery-electrics. Those vehicles will take 8 percent of the U.S. market, Ford says, and almost double that share in Europe and China.

The 2021 Ford Mustang Mach-E will be offered in all of those markets by then, along with numerous other battery-electric vehicles built on the same underlying architecture. They will come in a variety of body styles and ranges, and will sell under Lincoln and potentially other brands.

Putting the horse on the nose

The first one, the Mach-E, kicks off Ford’s renewed effort in electric vehicles with a bang. It seems safe to say it’s more than pretty much anyone expected from a company that didn’t launch a single new electrified vehicle between 2013 and 2020.

The horse on the nose, and the bold extension of the Mustang brand to a car with more than two doors and without a combustion engine, indicates how much Ford believes in this car. Once the shrieking from Mustang fanboys subsides, it’s up to the market to decide if this is a smart way to go electric.