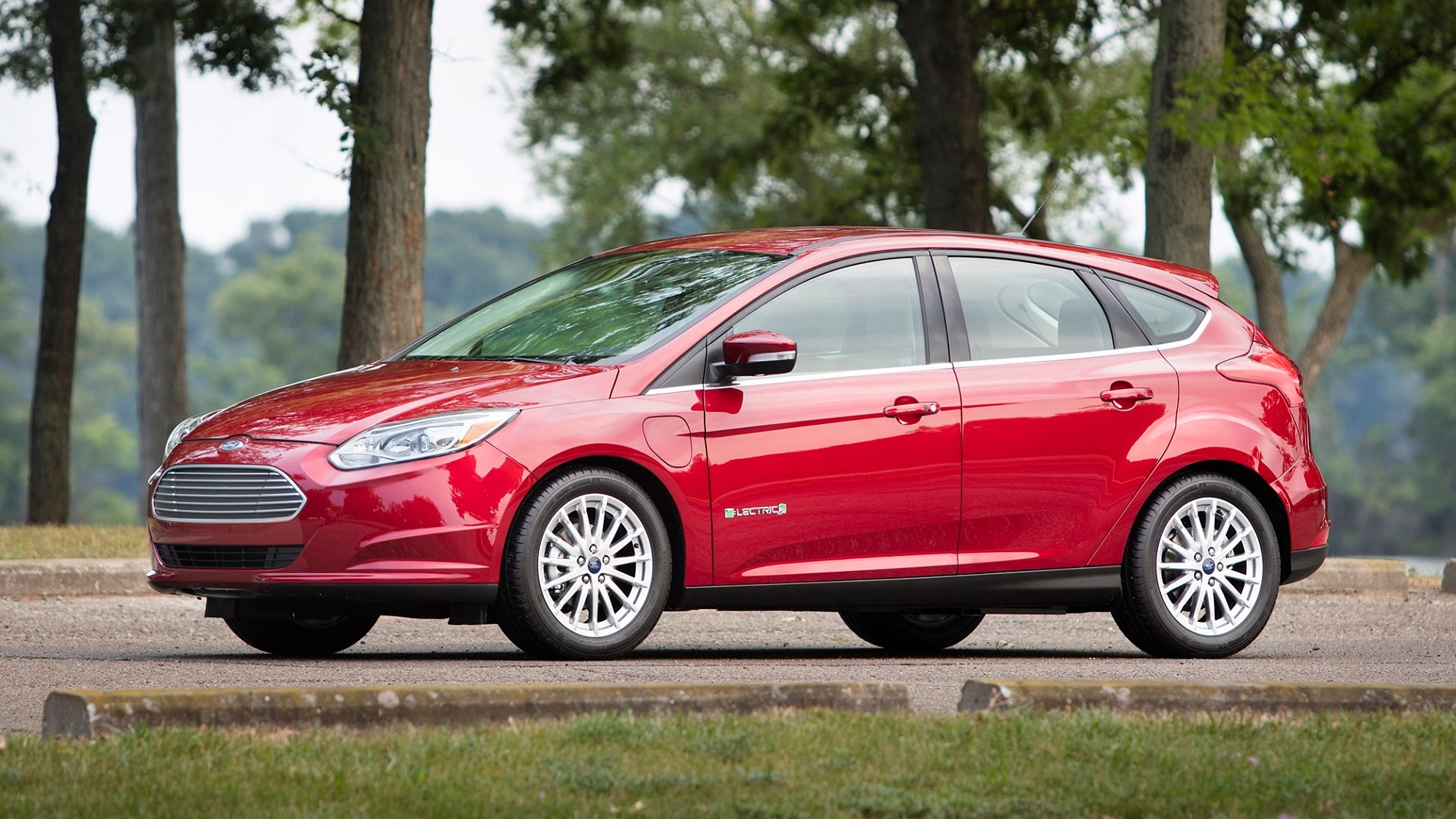 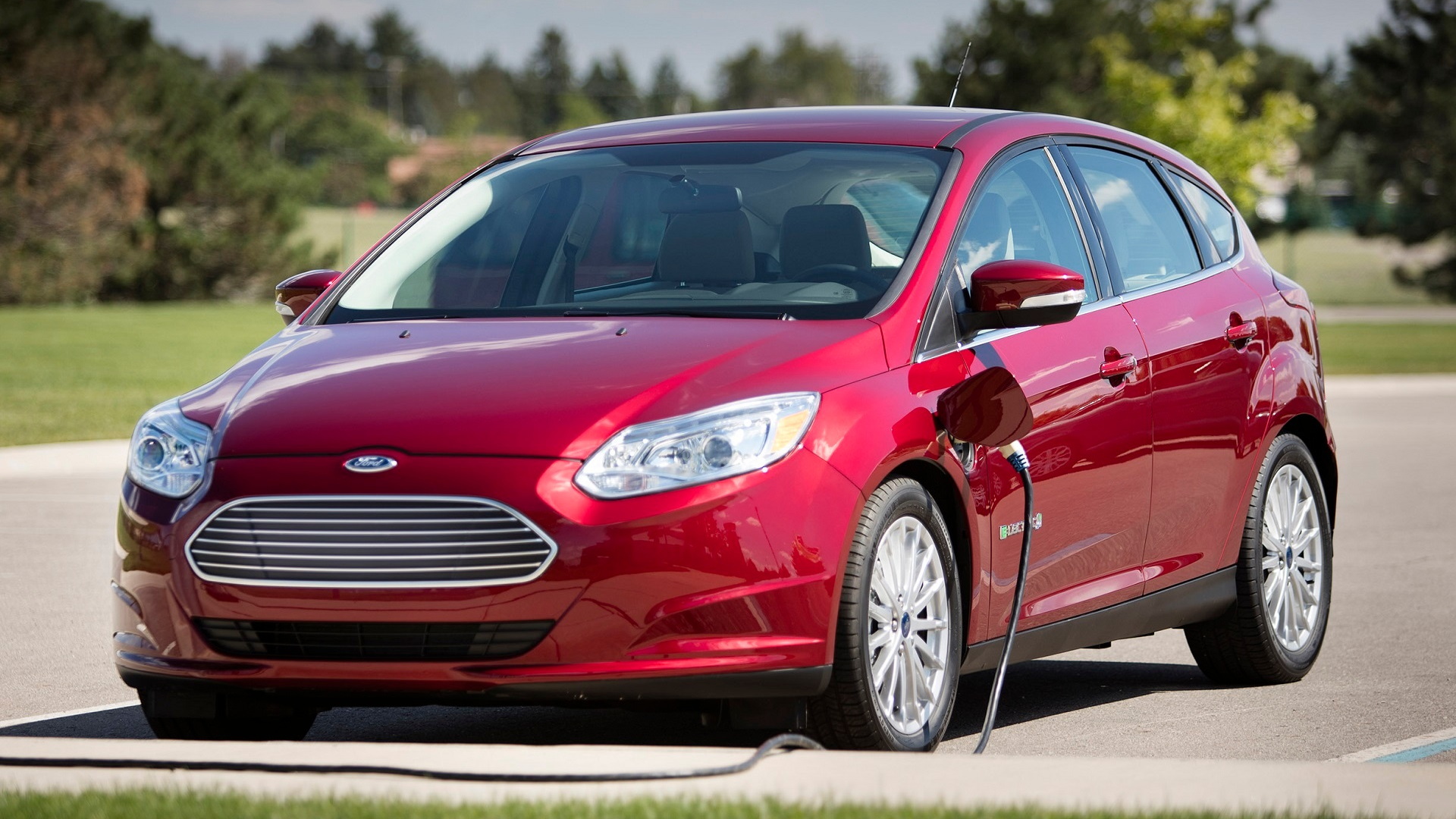 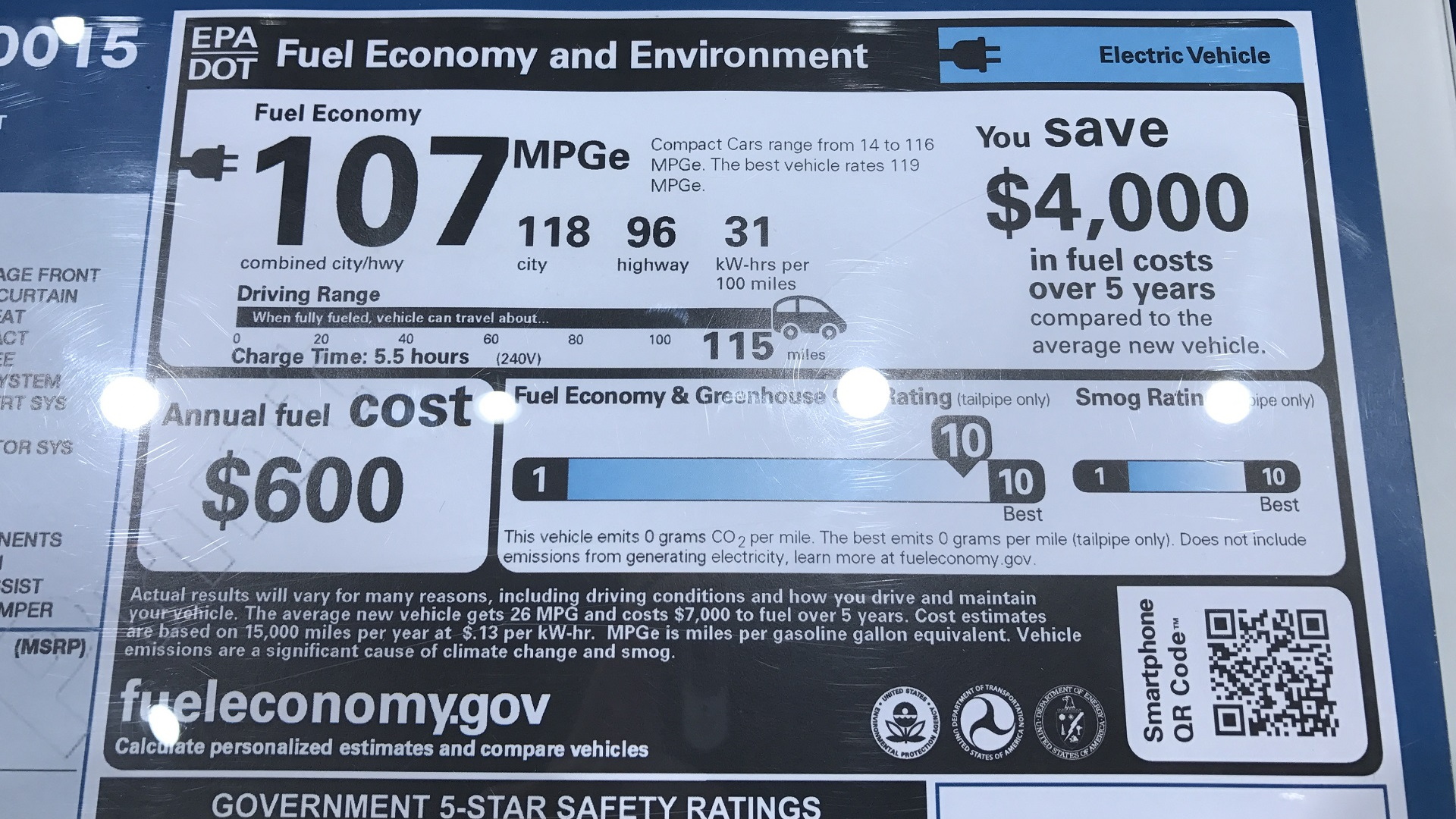 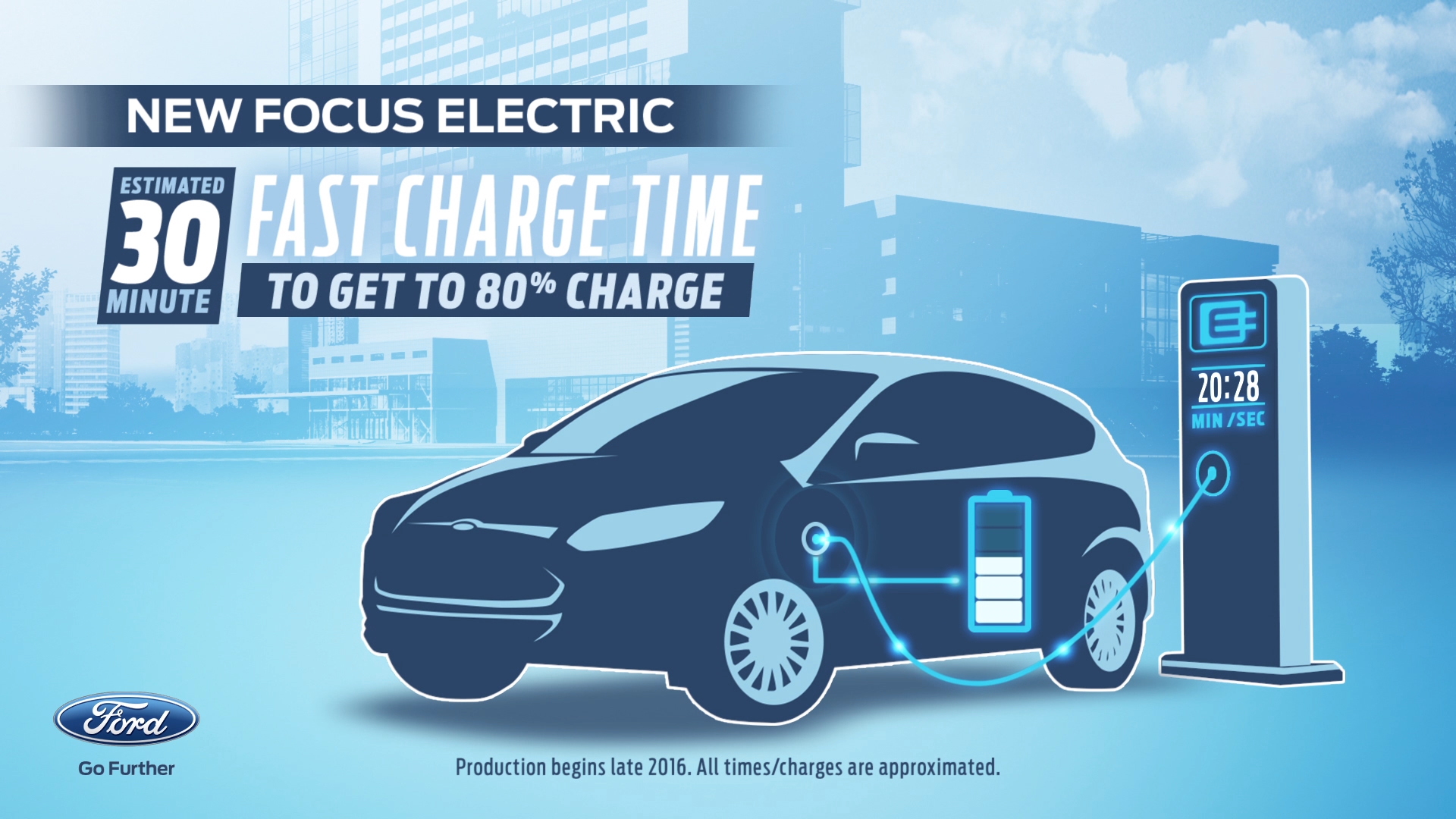 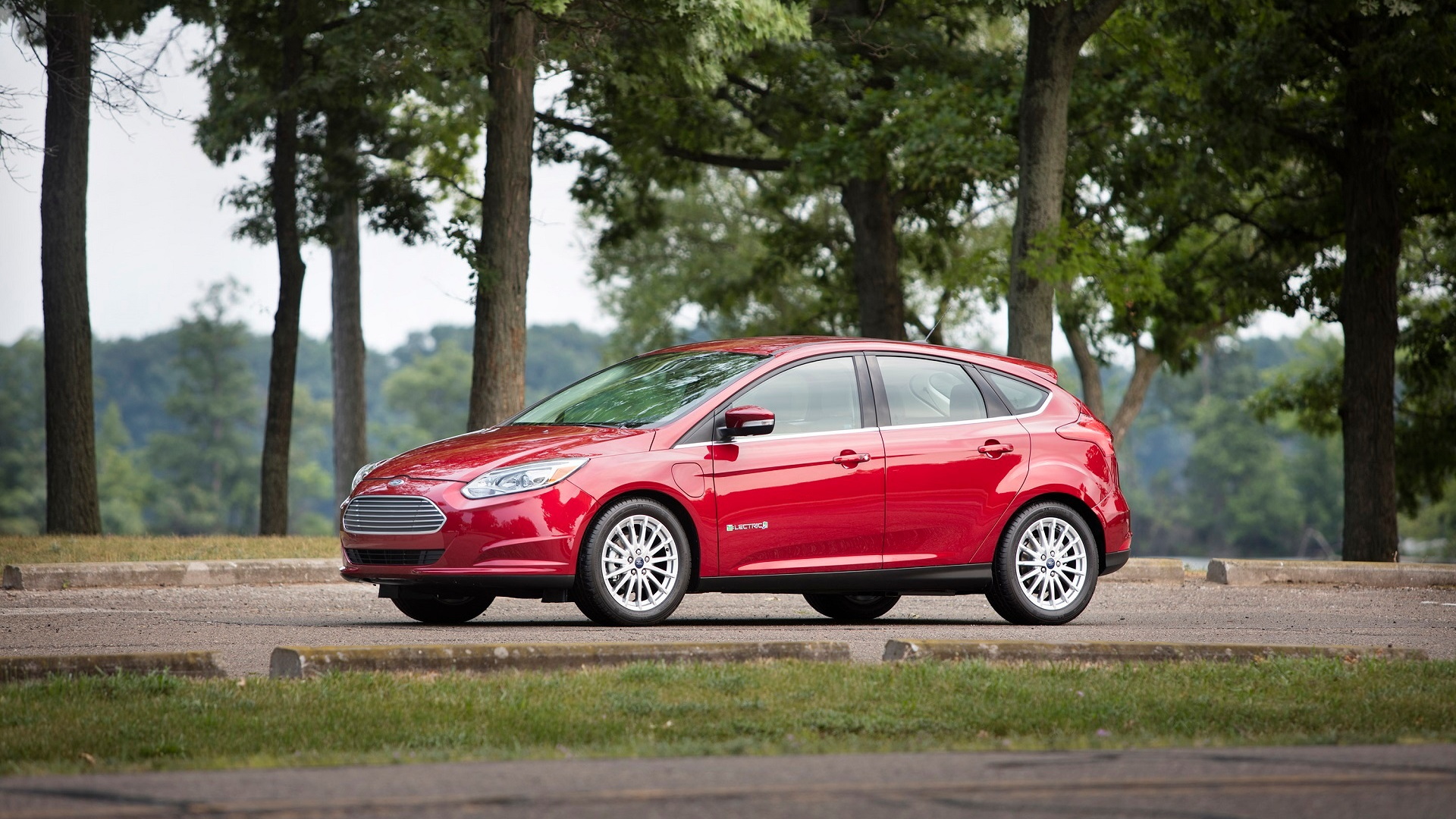 The 2017 Ford Focus Electric has been one of last electric cars remaining in the current model year for which we haven't had information.

Now Ford has released a few specifications, and a photo of a 2017 Focus Electric window sticker sent by a reader fills in more of the gaps.

The good news: after several years with a bottom-of-the-list range of just 76 miles, this year's Focus Electric is fully competitive at 115 miles.

That number didn't come from Ford itself, which appears to be waiting for the EPA to release certified electric range and energy-efficiency data on its website.

Instead, it's a projected rating from the window sticker of a 2017 Ford Focus Electric on display at the Los Angeles Auto Show. (Now why didn't we think of that?)

While the rise from 76 to 115 miles of rated range is the big news, Ford's only electric car for 2017 also gets an incremental boost in energy efficiency, from 105 to 107 MPGe.

(Miles Per Gallon Equivalent, or MPGe, is a measure of how far a car can travel electrically on the same amount of energy as contained in 1 gallon of gasoline.)

The 2017 Focus Electric is unchanged on the exterior, except for one almost imperceptible alteration: the charge-port door is no longer round, but now larger and oblong.

That's the giveaway that shows Ford has remedied the second of the Focus Electric's three main deficiencies: it now offers DC fast-charging capability as standard.

Ford will use the Combined Charging System (CCS) connector adopted by all U.S. makers except Tesla and all German companies as well.

The company has not chosen to address the remaining drawback in the Focus Electric, however, which is its badly compromised cargo bay.

While the electronics for the DC fast-charging are mounted behind the left-front fender charge port, the AC onboard charger continues to be sited between the rear wheel wells.

This requires a box almost a foot high that stretches the full width of the cargo bay.

Nissan had a similar problem in the first two years of its Leaf electric car, but it relocated its charger way back in 2013, and we're disappointed Ford hasn't done the same.

Ford does fit a clever movable shelf that either tilts down to meet the bottom of the hatchback opening or lifts up to give a level floor in what remains of the cargo bay, but the infringement on load space remains a major compromise.

Historically, the Focus Electric has been a compliance car, sold only in the volumes required for Ford to meet California's zero-emission vehicle mandate.

That means that over five years, fewer than 7,000 Focus Electrics have been delivered, against more than 100,000 Nissan Leafs and a like number of Chevy Volts in six years.

The electric Ford's strong points continue to be its fun-to-drive handling and roadholding, a high-quality interior, and the stealth nature of a car that no one will identify as electric.

This year's Chevrolet Bolt EV, of course, offers roughly double that range for several thousand dollars more—and seems likely to outsell the Focus Electric within a month or two.

But for Ford fans and those who prize anonymity in their electric vehicle, the Focus Electric is now competitive in its segment.

We look forward to test-driving the upgraded Focus Electric, which we last drove way back in 2012.