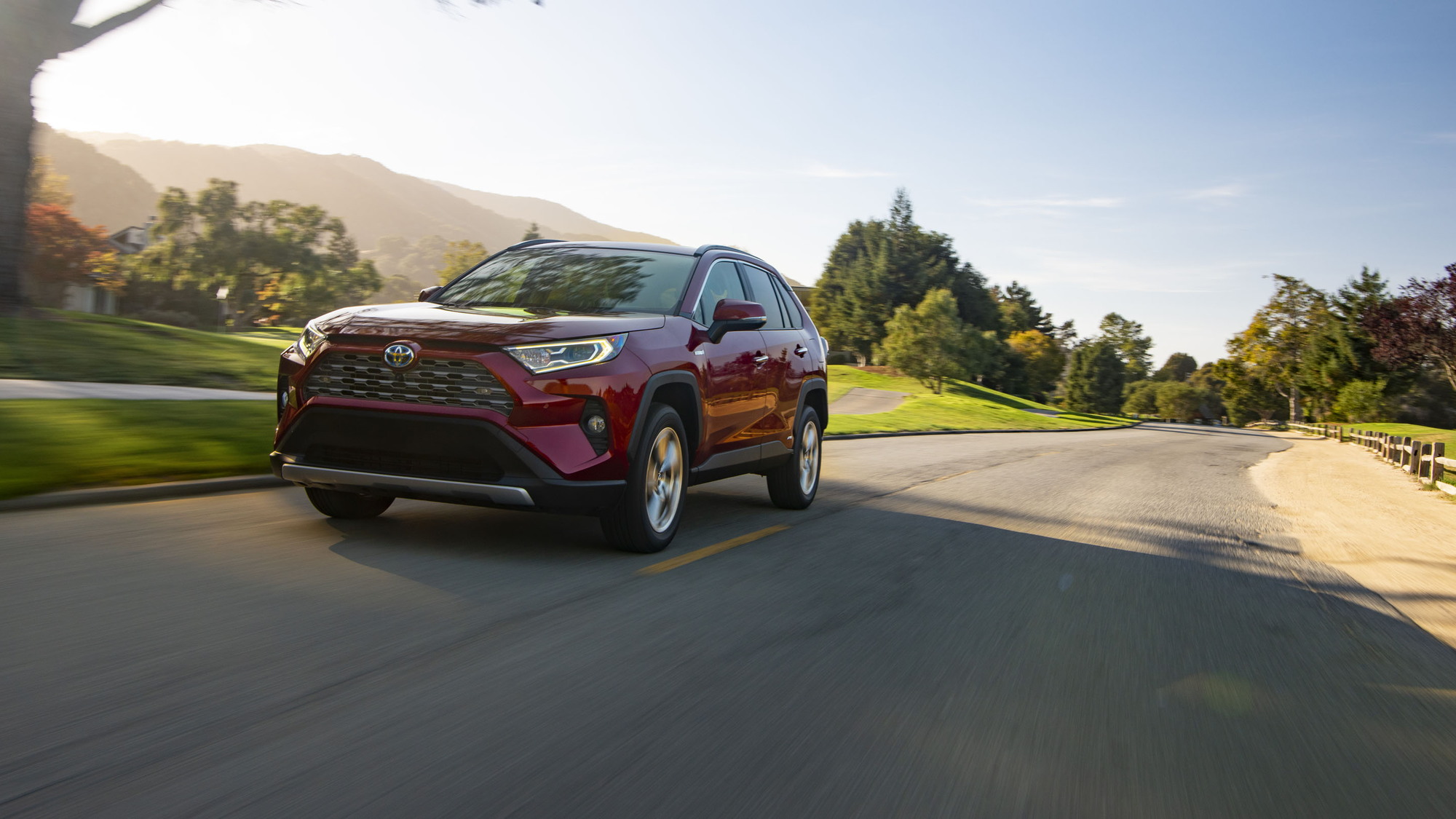 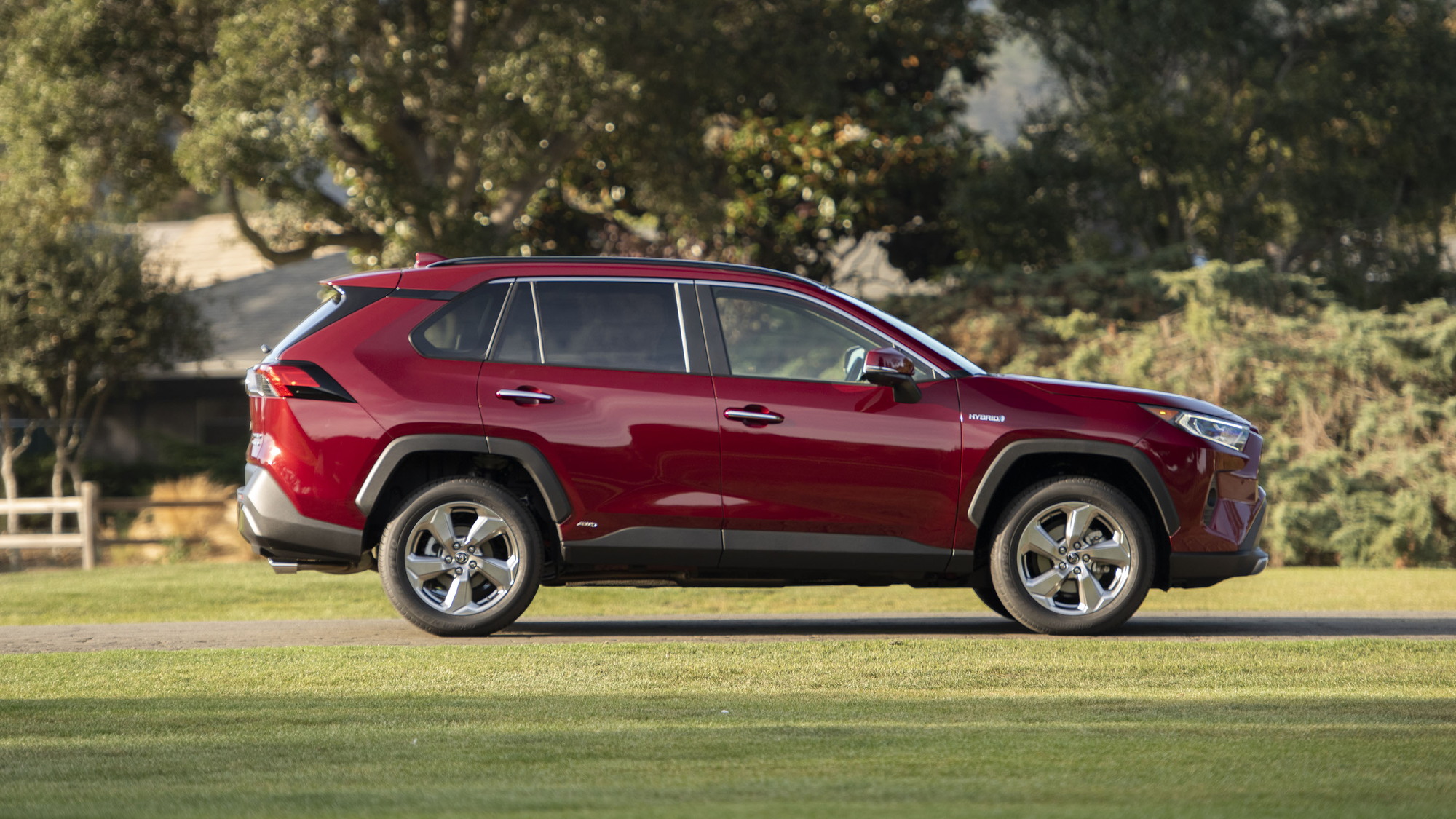 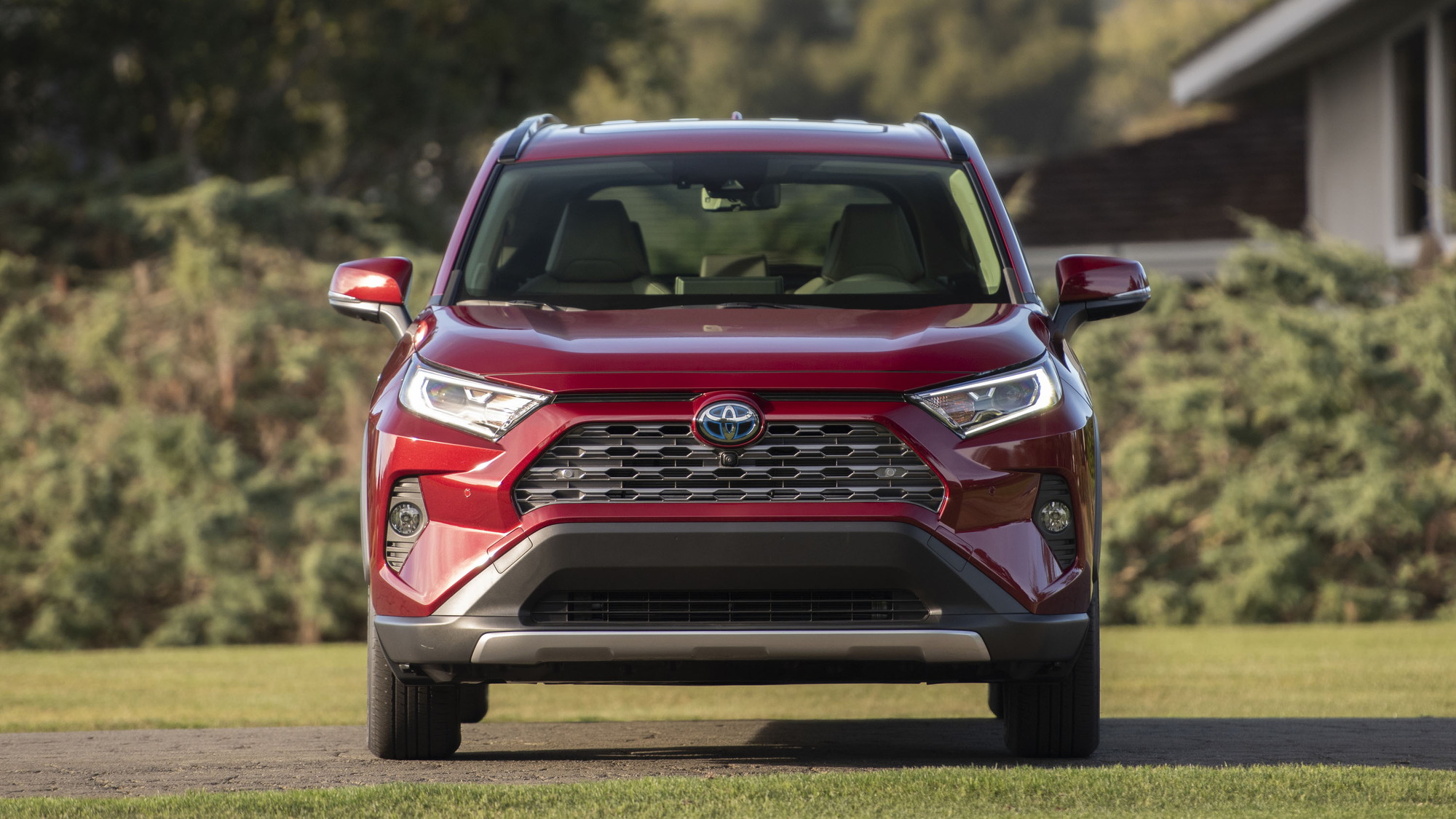 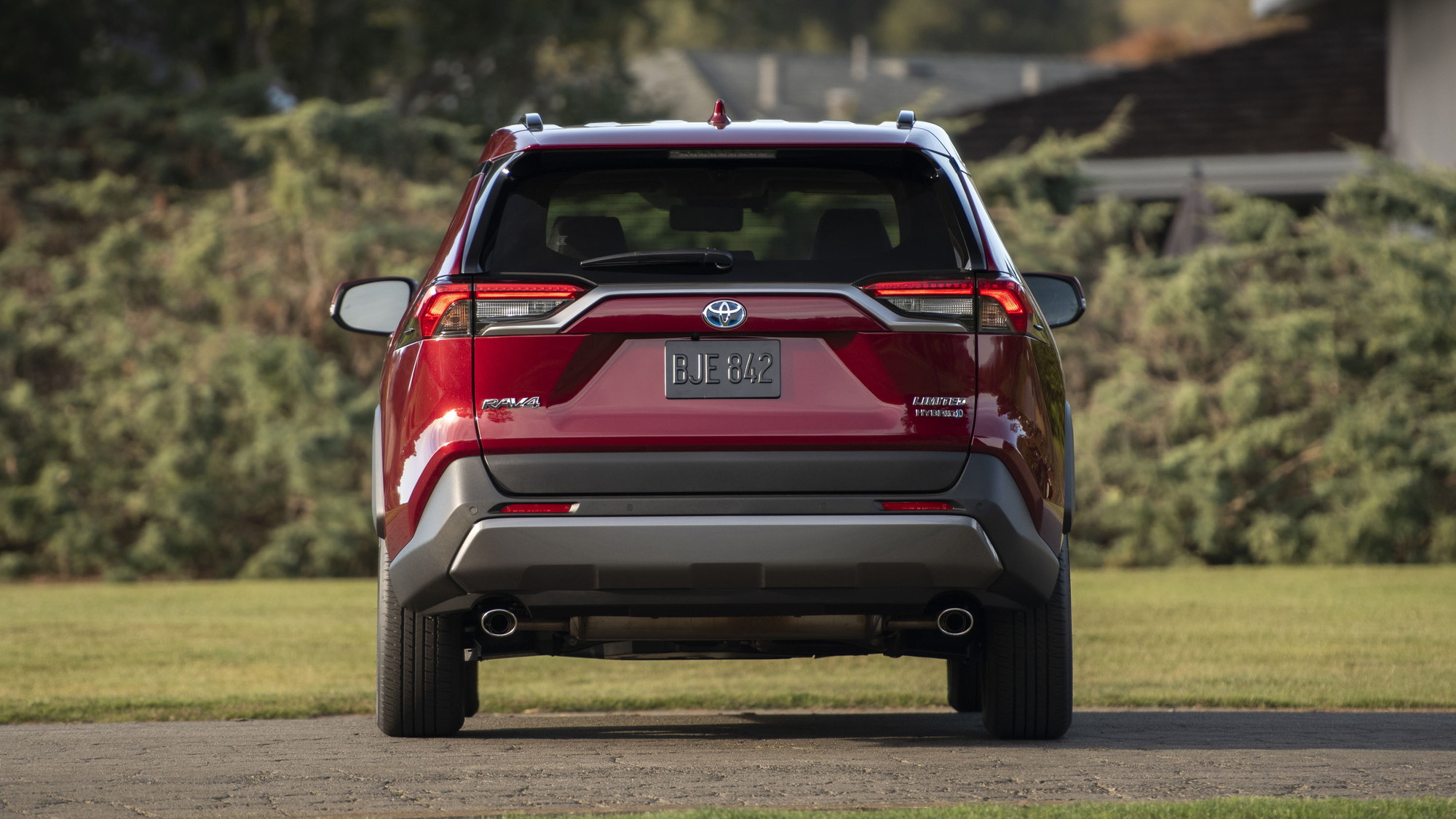 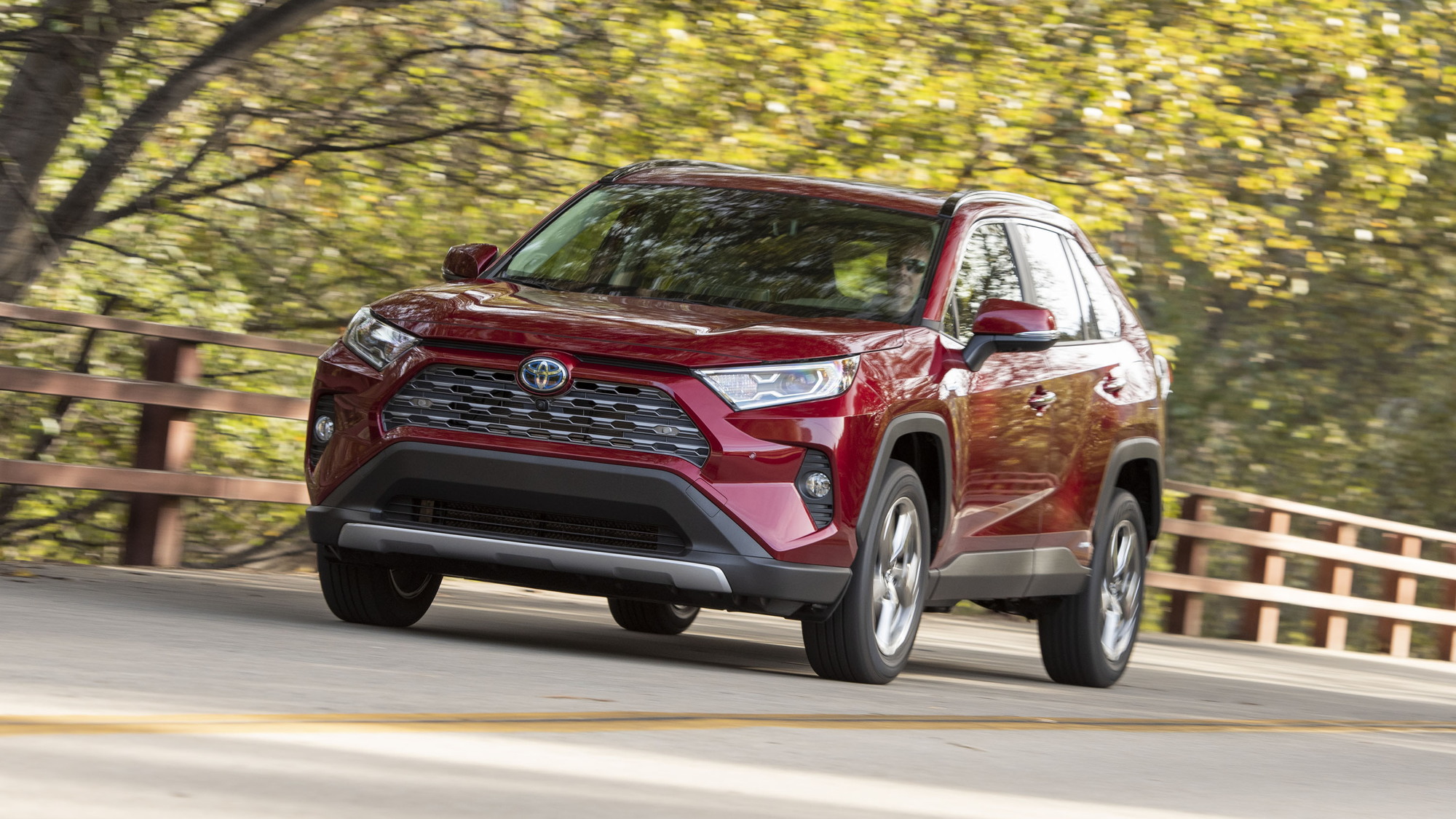 The 2019 RAV4 Hybrid is Toyota’s way of flexing its corporate might.

It’s as if the automaker called on each of its departments to create the new hybrid crossover SUV. The folks from design coughed up some 4Runner and Tacoma cues to give it a butch look. The Lexus team chiseled the cohesive, angular interior design. And the Prius development team worked under its hood.

The result is a 2019 Toyota RAV4 Hybrid that’s unusually thrifty for a crossover SUV. It’s not without its faults, but overall the RAV4 Hybrid I drove on roads winding around Carmel, California, is a solid effort.

Yes, there’s a non-hybrid RAV4. Toyota figures that the 2019 RAV4 Hybrid’s modest $800 price premium over a comparable non-hybrid will be hard for most buyers to resist. It's easy to see why Toyota is anticipating that demand will grow from about 11 percent electrification for the outgoing model to about a quarter of all RAV4s boasting hybrid tech.

Both RAV4s start with a 2.5-liter inline-4. In the Hybrid, that engine feeds a pair of electric motors to send power to all four wheels. In typical Toyota fashion, a nickel-metal hydride battery situated under the RAV4 Hybrid’s rear seat keeps the motors happy. Since the RAV4’s hybrid drive system includes an electric motor integrated into the rear axle, there’s no front-wheel-drive version. Sorry, Sun Belters.

The system’s total output is 219 horsepower (16 more than the standard model) and Toyota doesn’t quote a combined torque figure. Power routes to the wheels through what’s effectively a continuously variable transmission (CVT)—Toyota's much-utilized system integrating two motors, one of which assists the engine and helps recapture energy when braking.

With about 8.6 inches of ground clearance and a curb weight between 3,700 and 3,800 pounds, it’s no Prius. Predictably, fuel economy doesn’t match the Prius—but at an EPA-estimated 41 mpg city, 37 highway, 39 combined, the RAV4 Hybrid is the thriftiest crossover SUV around.

RAV4 Hybrids have subtly different front and rear bumpers than the rest of the lineup. They’re still good looking, at least by crossover SUV standards. Toyota’s wedgy, angular truck styling works well, although the chunky D-pillar adds a lot of visual heft. At the rear, the pert taillights are linked by a plastic panel that is either body color or color-coordinated to the rest of the trim, depending on variant.

The downside is the RAV4’s limited headroom and sloping roof pillar. Taller drivers bonked their heads getting into the passenger’s side thanks in part to a seat that sits oddly high and isn’t adjustable for height. The driver’s seat isn’t as much of an issue thanks to more adjustment. With the sunroof fitted to all but the base RAV4 Hybrid, headroom measures just 37.7 inches. Rear-seat ingress and egress are similarly challenging. Cabin and cargo space are unaffected by the battery.

The RAV4 rewards drivers with good handling and surprisingly strong acceleration from the hybrid powertrain. As in other Toyota hybrids, the transition between gasoline and electric power is audible but not necessarily felt in the cabin. The RAV4 idles smoothly and its transmission does its best to keep revs low.

Street starts are smooth, with a hint of surging on more-deliberate throttle inputs. The RAV4 Hybrid’s engine cuts out silently at stop lights.

Relatively large brakes—12-inch in front and 11-inch in rear—bring the RAV4 Hybrid to a halt and have good pedal feel. We didn’t notice any of the forward surging that used to plague Toyotas at traffic lights.

The RAV4 Hybrid XSE has sportier suspension settings and 18-inch alloy wheels, plus glossy black interior and exterior bits that automakers seem to equate with sports cars. Its ride felt a hair firmer, but the difference in steering tuning is barely noticeable. Still, the fact that the XSE trim isn’t available on the non-hybrid RAV4 suggests a notable strategic shift as Toyota seeks to electrify its lineup: Hybrids are no longer just the “eco” version; they’re also the “premium” and “sporty” one.

We didn’t have an opportunity to formally measure the RAV4’s fuel economy. However, a spirited jaunt up Laureles Grade toward Laguna Seca and then back down to Carmel returned an EPA-pleasing 39 mpg, according to the trip computer.

The RAV4 Hybrid starts at $28,745 for the LE trim, but the $30,545 XLE brings a host of worthwhile upgrades. Adding heated seats, a power liftgate, and a power driver’s seat bumps the price by about $1,300, but still keeps the RAV4 Hybrid will under the average new car price.

All those elements—design, packaging, and powertrain—come together to create a compelling small crossover SUV.

Internet Brands Automotive accepted some travel expenses from Toyota to bring you this firsthand drive report.