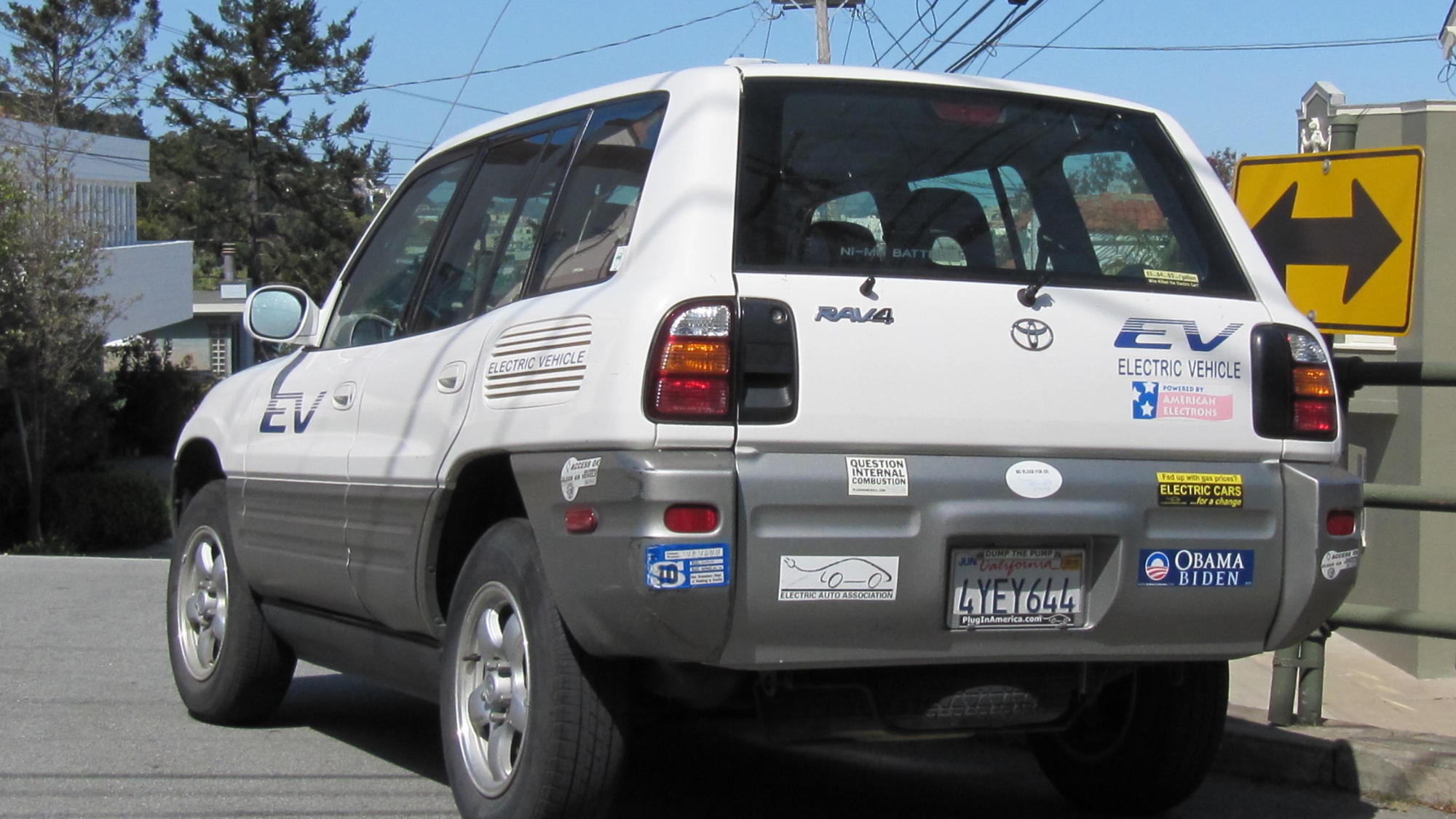 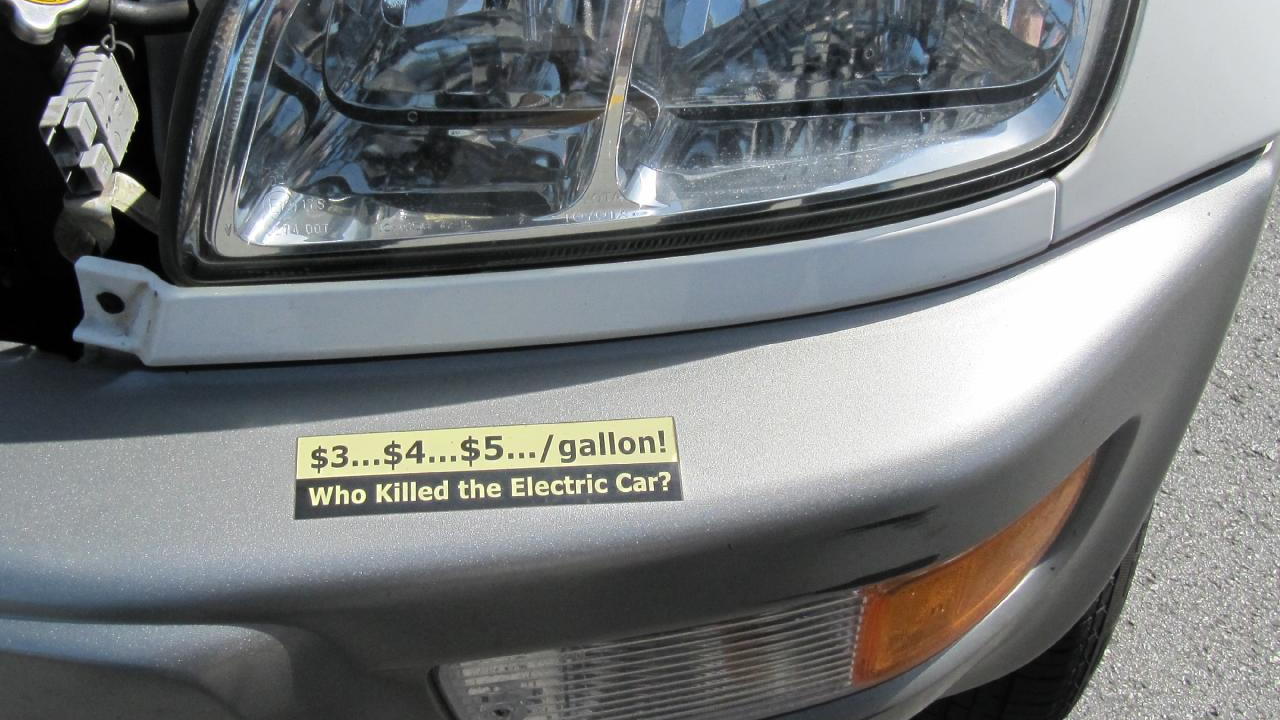 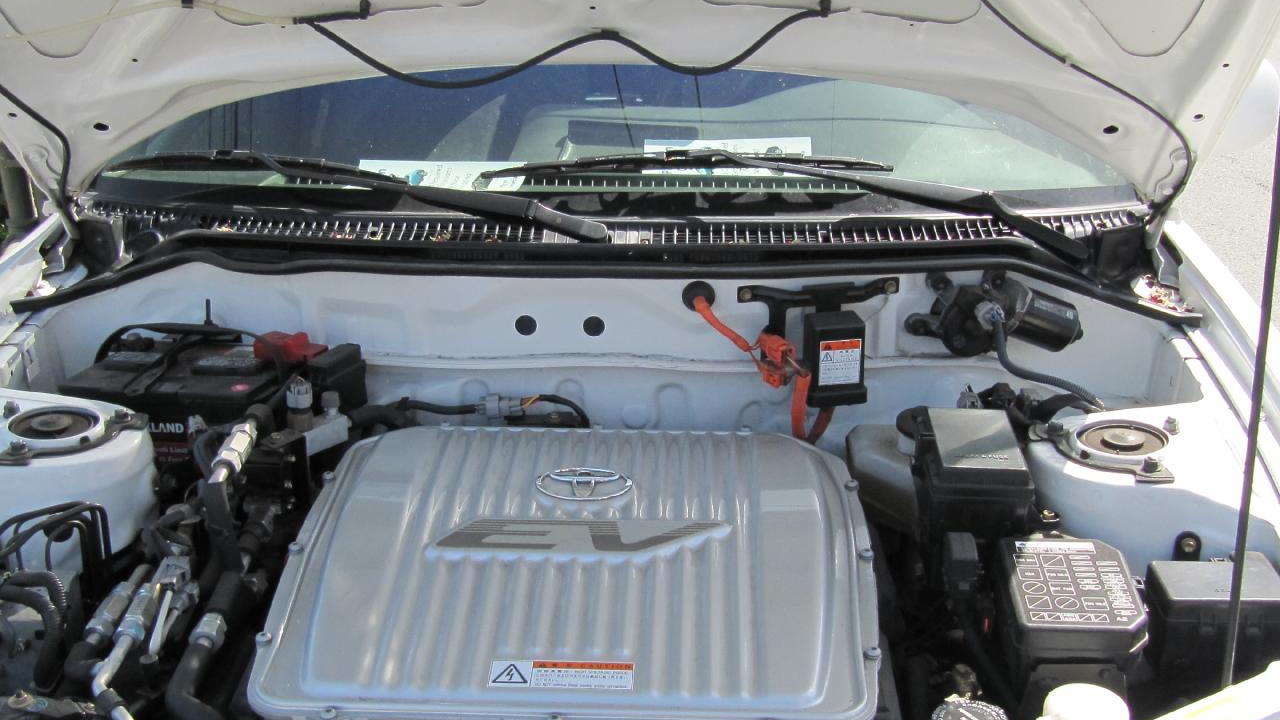 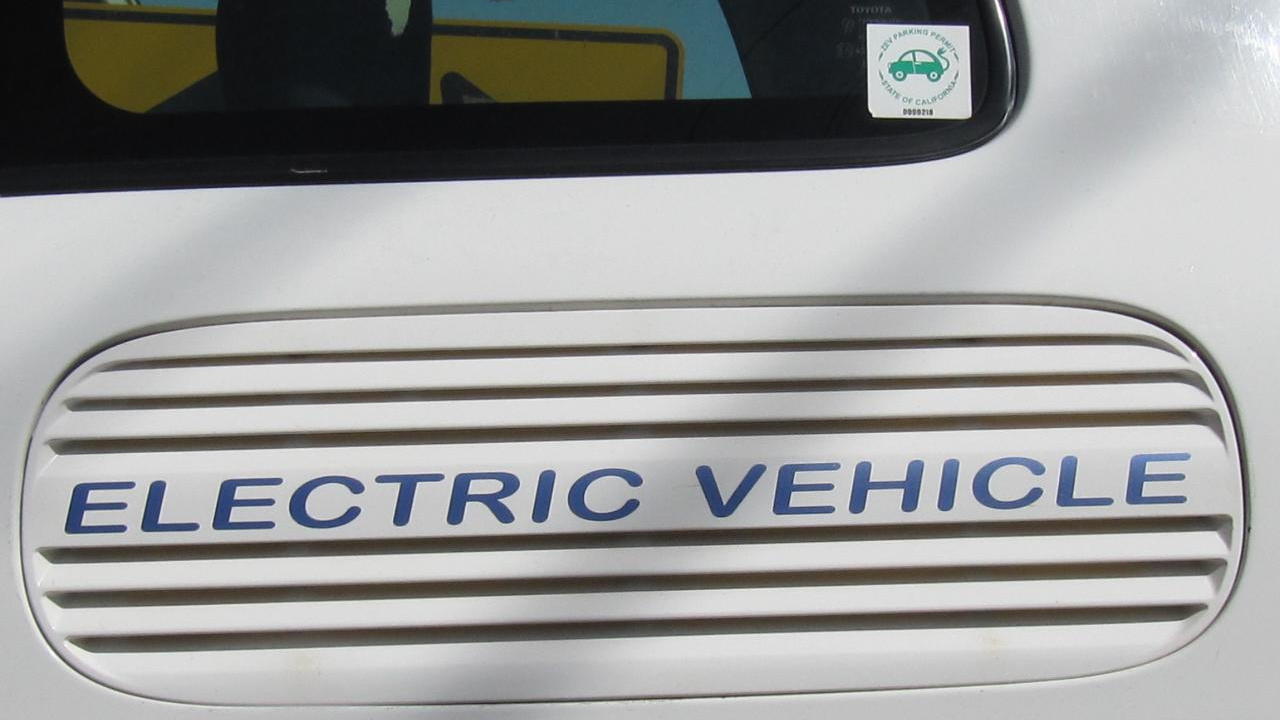 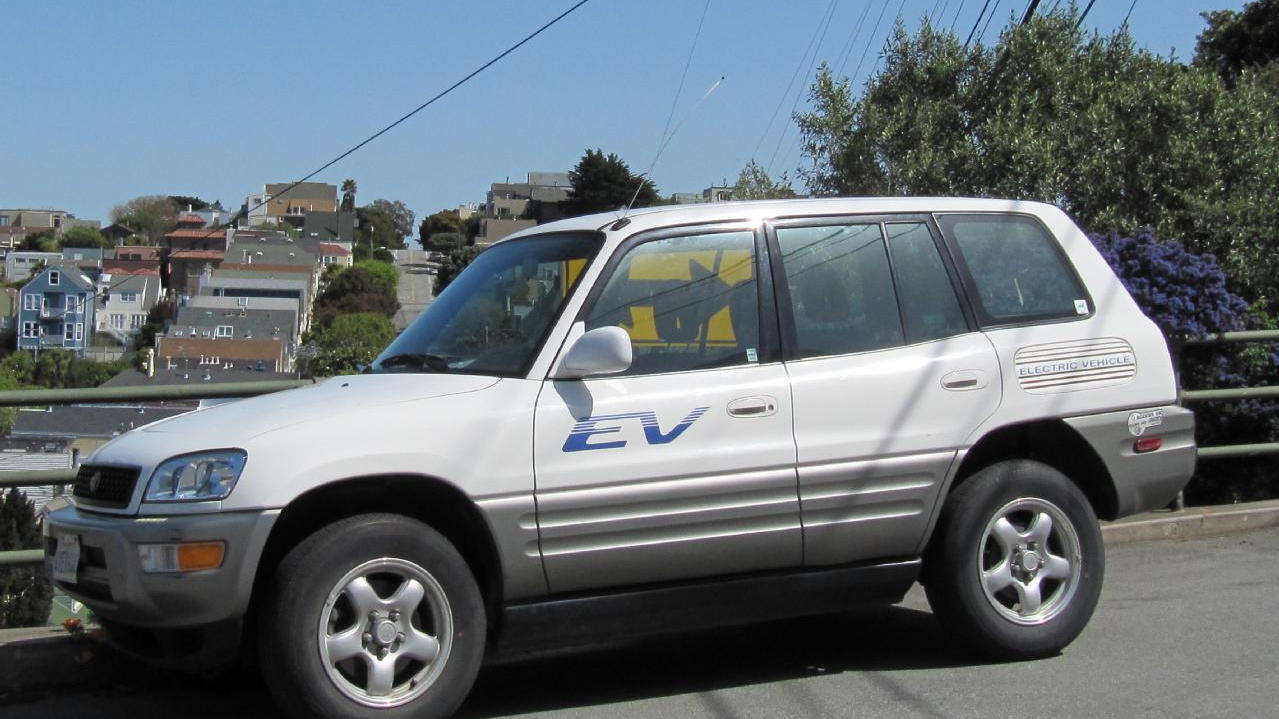 One of the best parts of the electric-vehicle world is the camaraderie. Someone knows someone who passes us along to a friend who knows a guy ... you know the story.

Which is how we ended up in San Francisco on a sunny Friday, driving a well-used--but still reliable--example of one of the highest-volume modern electric cars built to date, the Toyota RAV4 EV.

As EV advocate Marc Geller explains it, he became convinced a decade ago that an electric car was the best way he could reduce his consumption of oil and his carbon footprint.

After 9/11, when his aging French station wagon died, he took the plunge. First, he rented a Think City from Hertz in San Francisco, until his local Ford dealer got around to procuring one for him to lease. (Think was then owned by Ford, which soon sold it.)

A couple of years later, when the lease on his Think expired and it became clear he wouldn't be allowed to buy the car, he looked around for alternatives.

(That price included installation of the inductive-paddle 6000-Watt home charging system, which connects to 240-Volt power. A fully depleted battery pack recharges in about 5 hours.)

More than 300 to civilians

The vast majority were leased or sold in California to businesses and fleets, but in March 2002, the RAV4 EV was offered to consumers, with a battery warranty of 60,000 miles.

Sales ended in November 2002, one day after the California Air Resources Board changed the Zero-Emissions Vehicle requirement under which Toyota had offered the vehicle. The company filled all 328 orders taken until then, building cars through September 2003.

A few Toyota service centers still support the vehicle, and Geller can testify to the strong community amongst RAV4 EV owners.

Worth more than its used price?

Geller, a solar-panel installer, paid $38,000 for his compact crossover, and he reckons he could sell it for the same or more today. It now has 78,000 miles on the clock, and he routinely logs trips of more than 100 miles a day, recharging en route.

The car has a 27.4-kilowatt-hour nickel-metal hydride battery pack, which powers an electric motor driving the front wheels. The battery pack was warrantied for 60,000 miles.

Range was quoted as 80 to 120 miles, and top speed is governed to 78 miles per hour. The 0-to-60-mph time is a fairly leisurely 18 seconds or so, depending on battery charge.

Viewed from the perspective of its 2010 equivalent, the first-generation Toyota RAV4 is small and somewhat unrefined. Its windshield is upright and its pillars are pleasantly slim, for much better outward vision than today's bulkier models.

Driving the hilly San Francisco streets, the electric RAV4 EV recaptured much of the energy it expended in climbing every time we came to a downhill stretch--with Geller's add-on capacity meter on the dash showing the battery pack's state of charge to one-tenth of a percentage point. 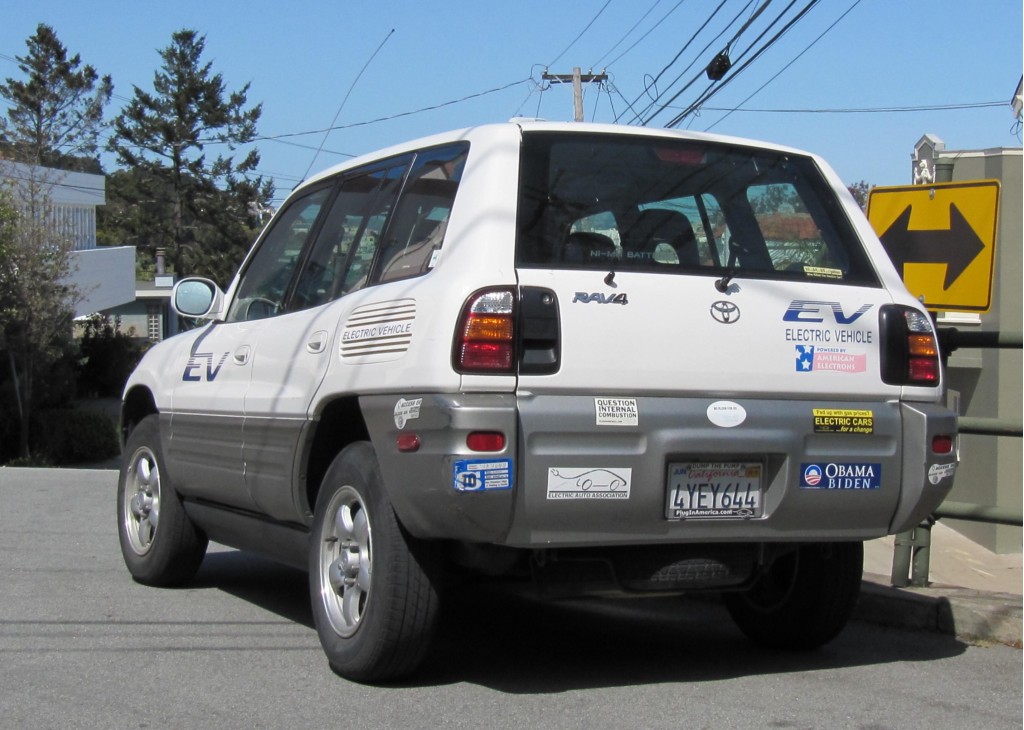 The standard Toyota shift lever has two forward positions, the default one of which provides no regenerative braking at all.

While unusual for anyone who's driven a more modern electric car, it's easy to get used to--and a button on the side of the shift lever adds some regen, though not a lot.

Stronger regenerative braking is achieved when the driver shifts into the "low" gear, producing a driving experience more akin to that of a Tesla Roadster (though without the stunning acceleration). With practice, one-pedal driving is possible, even in hilly San Francisco.

The car has a quiet but continuous squeal from the front as it gets going, which Geller says is a chronic problem owners attribute to the aluminum front brake disks until they warm up.

Geller has had only two failures in his five years of ownership, during which time he's put on tens of thousands of miles.

The first was the fan on the charging port behind the grille, which gave up the ghost. This limited charging to 20 percent of pack capacity before the receptacle got too hot and safety sensors shut off the charging altogether.

Toyota, Geller said, would not simply sell him a replacement fan (which screws onto the outside of the receptacle). Instead, the company insisted he would have to replace the entire port assembly, for which they quoted $4,000.

The second failure was a capacitor within the power electronics inside the large under-hood box. Again, Toyota insisted on replacing the entire assembly, again for several thousand dollars.

In both cases, the extended network of RAV4 EV owners and enthusiasts came to his rescue. One owner researched several aftermarket fans, locating one with a higher rating and more durable build.

Another just had the necessary capacitor custom-fabricated, since it had apparently failed for many of the hundreds of owners still running their RAV4 EV electric vehicles, who provide a ready market. 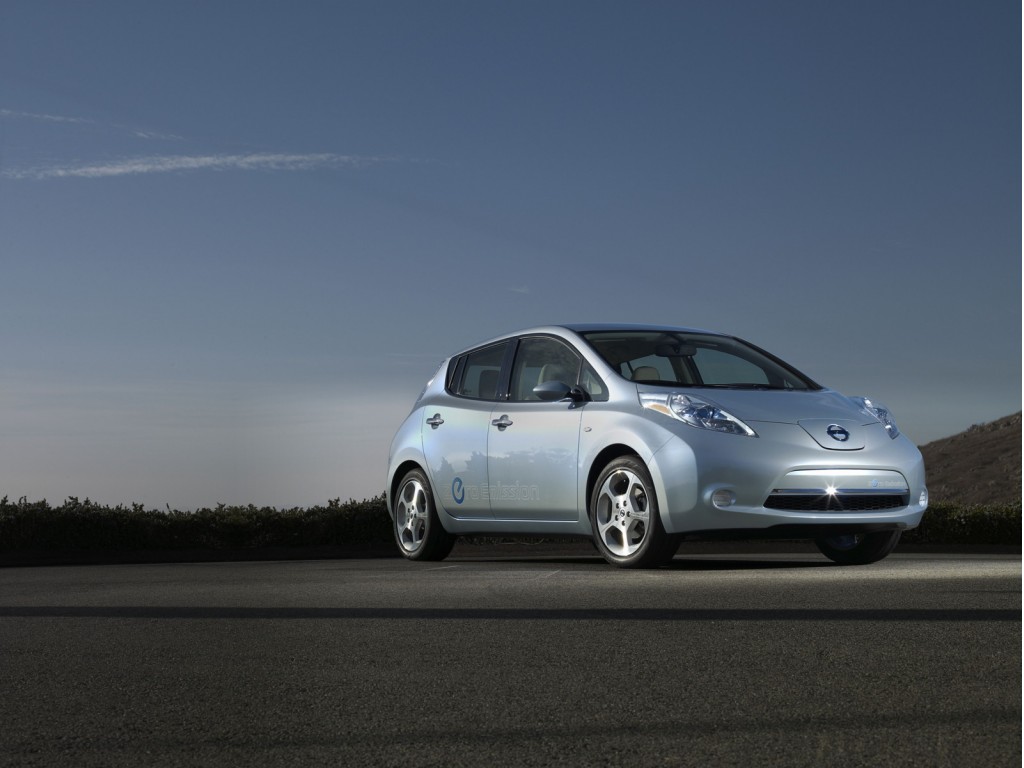 Geller isn't sure how long his battery pack will last--they're no longer available from Panasonic, and "lightly used" packs are quoted at $15,000 or thereabouts--but looks forward to quite a bit of future life in his electric SUV.

Toyota is planning a 2012 Prius Plug-In Hybrid. But while it has showed several electric concept cars,  its U.S. plans for a future all-electric version of its Scion iQ minicar remain unclear.

What about the new crop of electric cars coming soon, like the 2011 Nissan Leaf or the 2011 Chevrolet Volt? He's very firm that he will only drive battery electric cars in future--nothing with an internal combustion engine, which rules out the Volt.

Would he buy a Leaf? Geller just smiles.