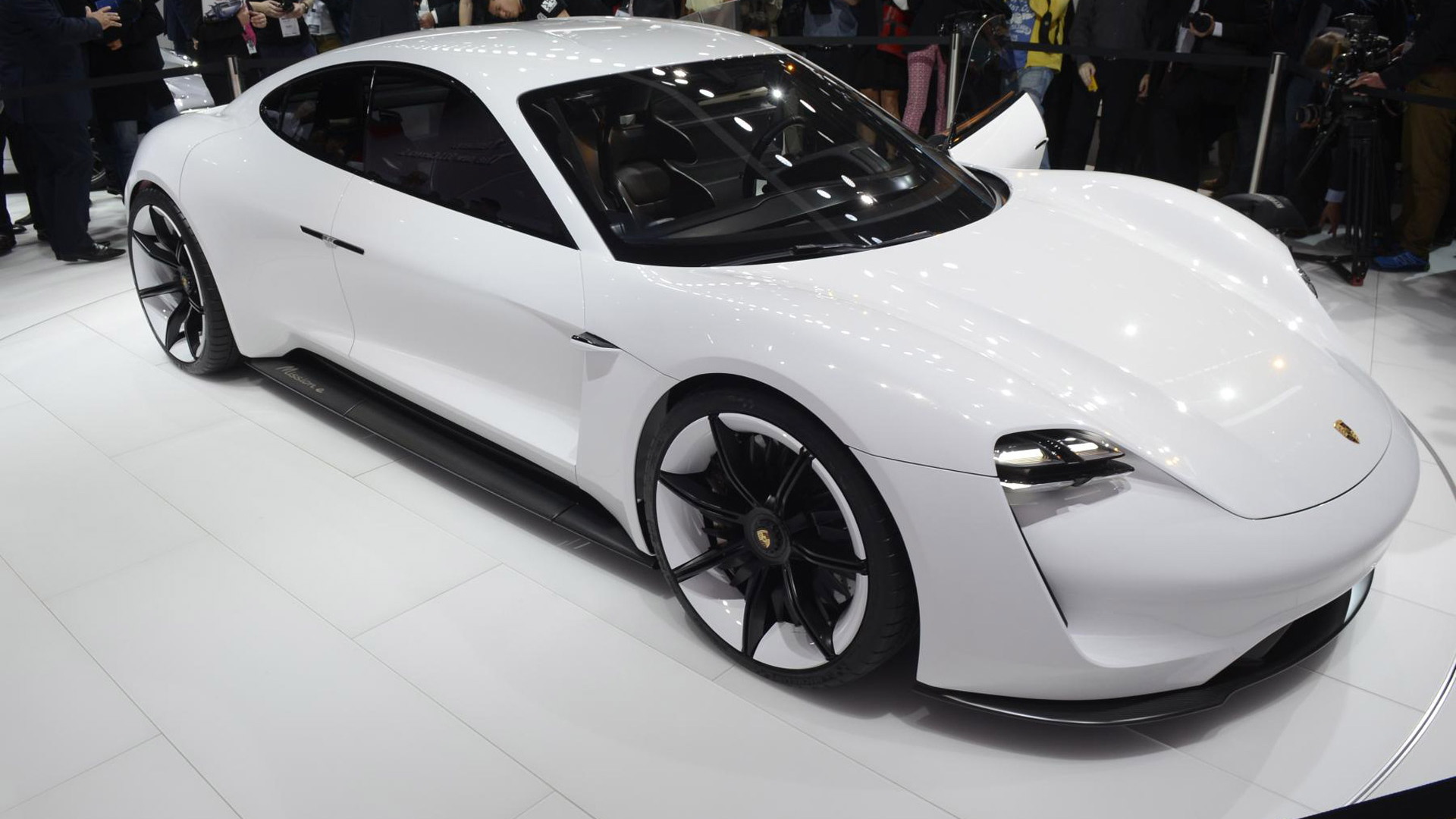 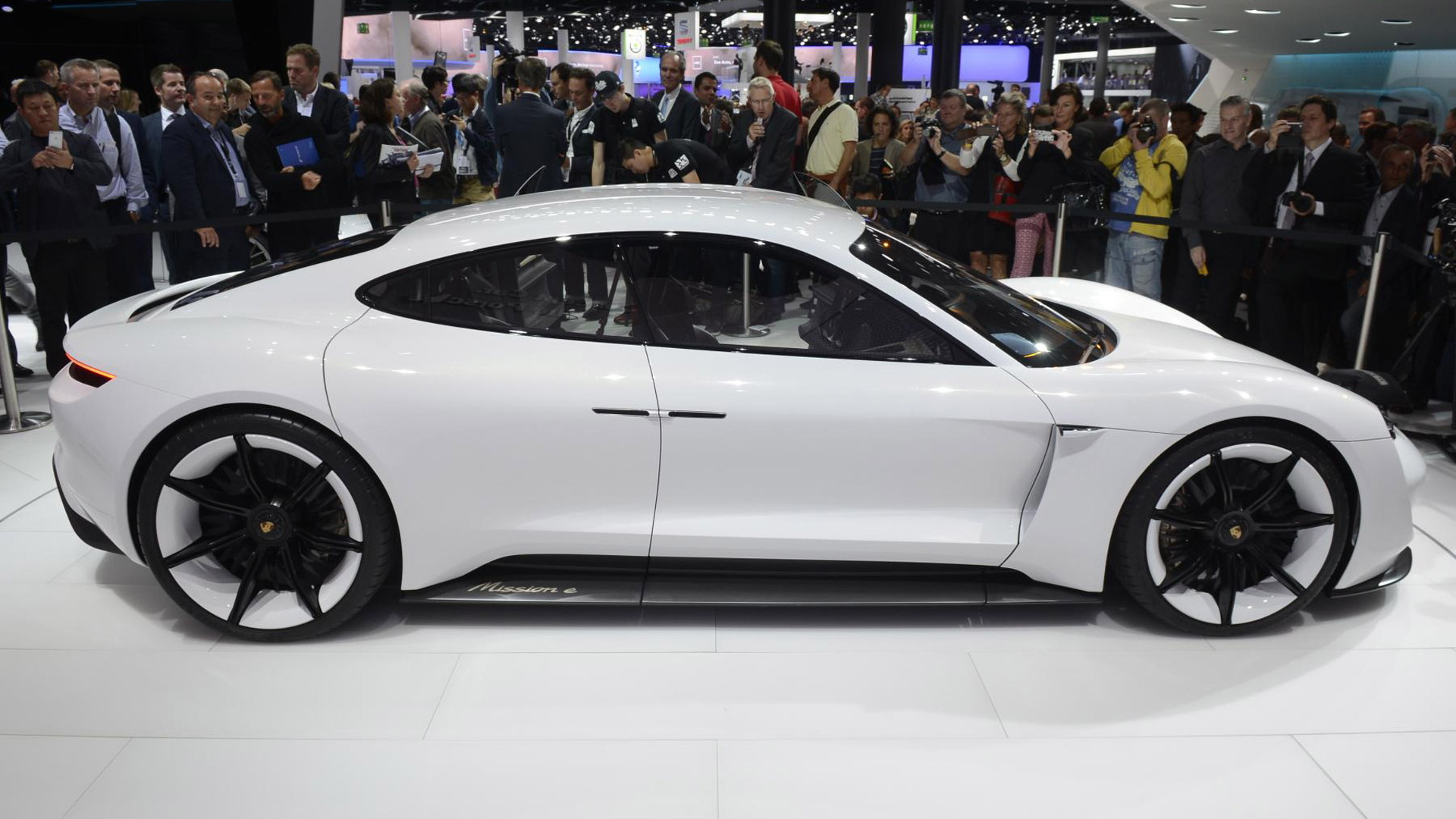 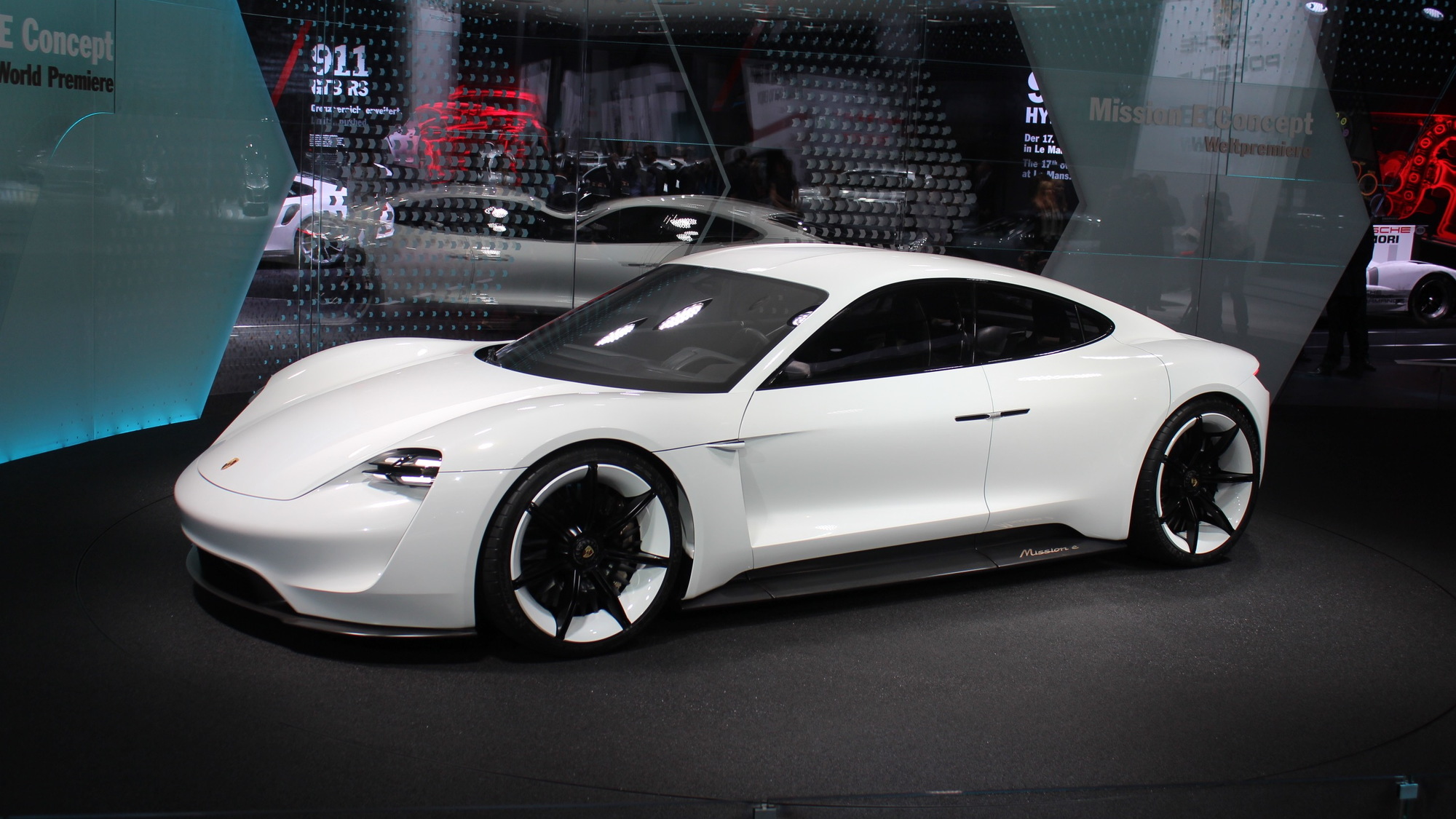 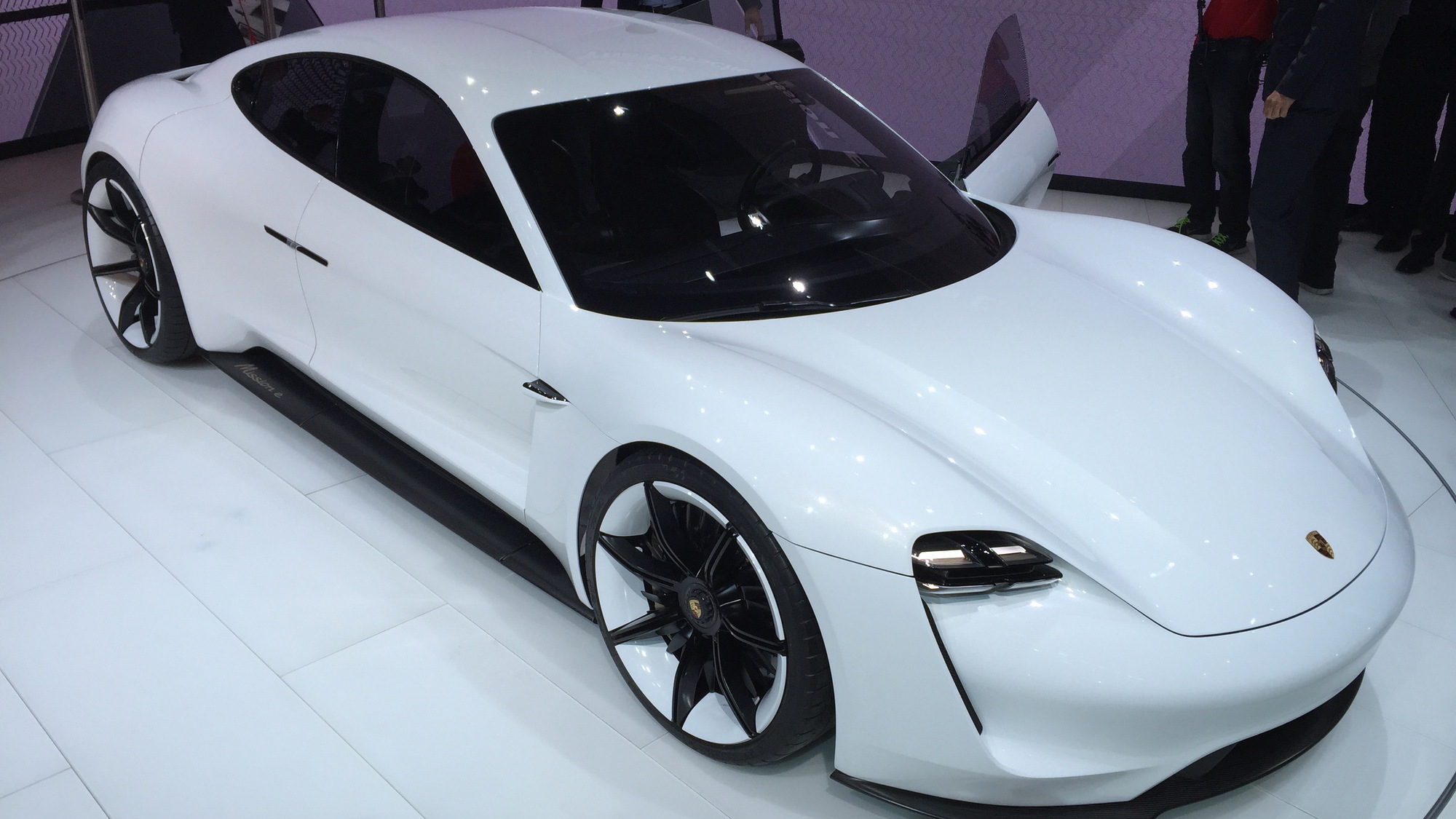 Arguably the most stunning car at this week's Frankfurt Motor Show was the Porsche Mission E, a low, sleek all-electric sport sedan that is likely to go into production within three or four years.

It stole much of the limelight from the other all-electric debut, the Audi e-tron Quattro Concept, a lightly disguised version of what will become the Audi Q6 sporty crossover utility vehicle offered with a variety of powertrains.

But the Porsche was the more important, so it's worth looking at what it represents for the industry, for electric cars, and for electric-car startup Tesla Motors.

Porsche was arguably the prestige carmaker most startled by the late 2012 arrival of the Tesla Model S.

That electric luxury sedan was lauded not only in the U.S.--by buyers and media alike--but also by the German automotive press, which suggested it offered a combination of qualities no German maker could duplicate.

For the three companies (BMW, Daimler, and VW Group's Audi) that are used to dominating the high end of the world's car market, that was deeply, profoundly unsettling.

And once they tested the Model S, and realized that it delivered on the promise of a good-looking, smooth, fast sedan that happened to run entirely on electricity, those three makers set about figuring out what to do about it.

The answers have varied from maker to maker.

BMW is by far the most advanced in electric-car technology, with billions of dollars invested in new technology ranging from carbon-fiber reinforced plastic (CFRP) body shells to a complete toolkit of electric-drive components.

ALSO SEE: BMW i3: What A Tesla Driver Thinks Of New Electric BMW

But thus far BMW's two offerings are both in niche markets: the small battery-electric i3 city car, with 81 miles of range and oddball rear doors, and the sexy i8 gull-winged plug-in hybrid sport coupe, starting at $135,000.

With its clever optional range-extending engine, the i3 REx can achieve about 150 miles of range--albeit with some performance limitations.

But neither BMW competes directly against the Model S sedan or upcoming Model X crossover.

It is rumored to be developing a new line of electric-drive vehicles on a dedicated "EcoChic" platform, but those apparently will not arrive until 2018 or even later.

Thomas Weber, the Daimler board member in charge of car development, told reporters at the show that the company would introduce a different kind of battery-electric vehicle with 250 miles of range.

Audi will have its Q6 e-tron electric crossover, more or less competing against the Tesla Model X, as well as several plug-in hybrids, including the 2016 Audi A3 Sportback e-tron.

Porsche, now part of the VW Group, gets the Model S to compete with--hence the Mission E concept.

Contrary to what you may read, by the way, the Mission E is not a disguised version of the next Panamera sedan.

It's a dedicated platform intended solely for electric cars, and its battery pack is housed under the floorpan, stretching axle to axle, side to side, just like Tesla's.

And that will probably work to its advantage, against other architectures that are adapted more directly from underpinnings designed for combustion engines first and foremost.

If a production version of the Porsche Mission E arrives in, say, late 2018, Tesla hopes by that point to have launched the first members of its smaller and more affordable Model 3 lineup.

With a design to be revealed next spring, and production supposedly starting late in 2017, the Model 3 is Tesla's first foray into mass-market vehicles.

So while Porsche will be introducing a competitor to the Tesla Model S--and likely its highest-end versions, such as the current P90D--Tesla will be moving downmarket.

And the reputation of its brand will likely allow Porsche to do well in its home market, where Tesla sales remain low, as well as in North America.

But assuming that Porsche can indeed produce a battery-electric fast sporting sedan that competes effectively with the Tesla Model S on design, performance, and features, the German contenders still lack a crucial element in the Tesla mix.

That is the company's continuously expanding Supercharger network of DC fast-charging stations--which are free for all Tesla owners to use (though the company prefers that occur only on long road trips).

And there's a strong argument that without a similar network in place by the time the Germans introduce their own luxury electric cars, with ranges around 250 miles, their prospects will be somewhat to severely handicapped.

Tesla now has more than 500 Supercharger sites globally, with almost 3,000 charging stations. By 2018, those numbers may well have tripled.

But Porsche, along with Audi and the rest of the VW Group, and BMW, and Daimler, and GM, and Ford, are committed to the DC fast-charging standard called Combined Charging Standard (CCS), also known as "SAE Combo."

Today, only a handful of electric cars are sold in the U.S. using that standard--and as of today, the U.S. Department of Energy's Alternative Fuels Data Center shows 270 U.S. locations offering CCS fast charging, with a total of 472 outlets.

The comparable figures for the Tesla Supercharger network are 205 U.S. locations with 1,252 outlets; for the CHAdeMO standard used by the Nissan Leaf, Kia Soul EV, and Mitsubishi i-MiEV, the numbers are 939 locations with 1,255 outlets.

So the question becomes: How will Porsche and Audi work with the rest of their CCS partners to put in place a charging network that rivals Tesla's, by the time their cars arrive in 2017 or 2018?

The answer to that question is not immediately obvious. Last December, BMW and Volkswagen announced plans to fund about 100 CCS fast-charging locations to provide "charging corridors" in the Northeast and on the West Coast.

But it's quite unclear whether the sum total of those sites will add up to more than a fraction of what Tesla will offer if it continues to expand the Supercharger network at the current pace.

And unlike the no-charge, use-it-and-go ease of Supercharging, many of the various entities offering CCS charging will charge for the service.

There will be a variety of networks, which may require memberships, charging ID cards, and the like. In other words, it won't be a single, seamless, integrated network.

Still, Porsche's promise of 15-minute DC charging at 800 volts--a higher rate than any battery pack in production today--in its Mission E indicates that the company is well aware of the need for fast charging to make its car comparable in function to a gasoline luxury car.

Porsche 918 Spyder in the Australian Outback

We're willing to take the quality and capabilities of these future electric cars as a given. They may not surpass Tesla, but they'll at least provide equivalent performance, space, and features. To compete head-to-head, they'll have to--and the makers know that.

But over the next few years, seeing how the German prestige markers plan to compete with Tesla's free and increasingly pervasive fast-charging network promises to be a fascinating story to watch.