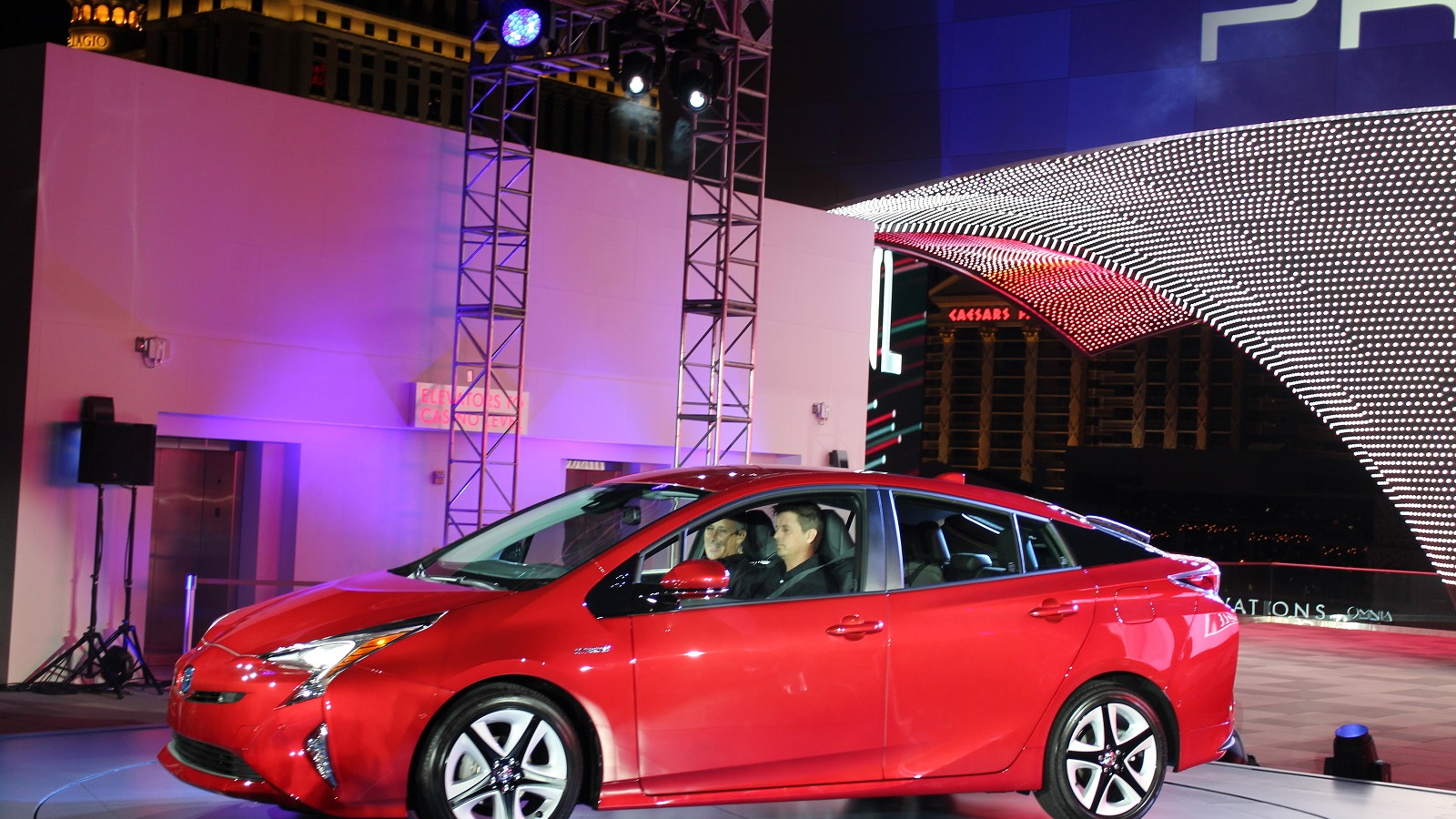 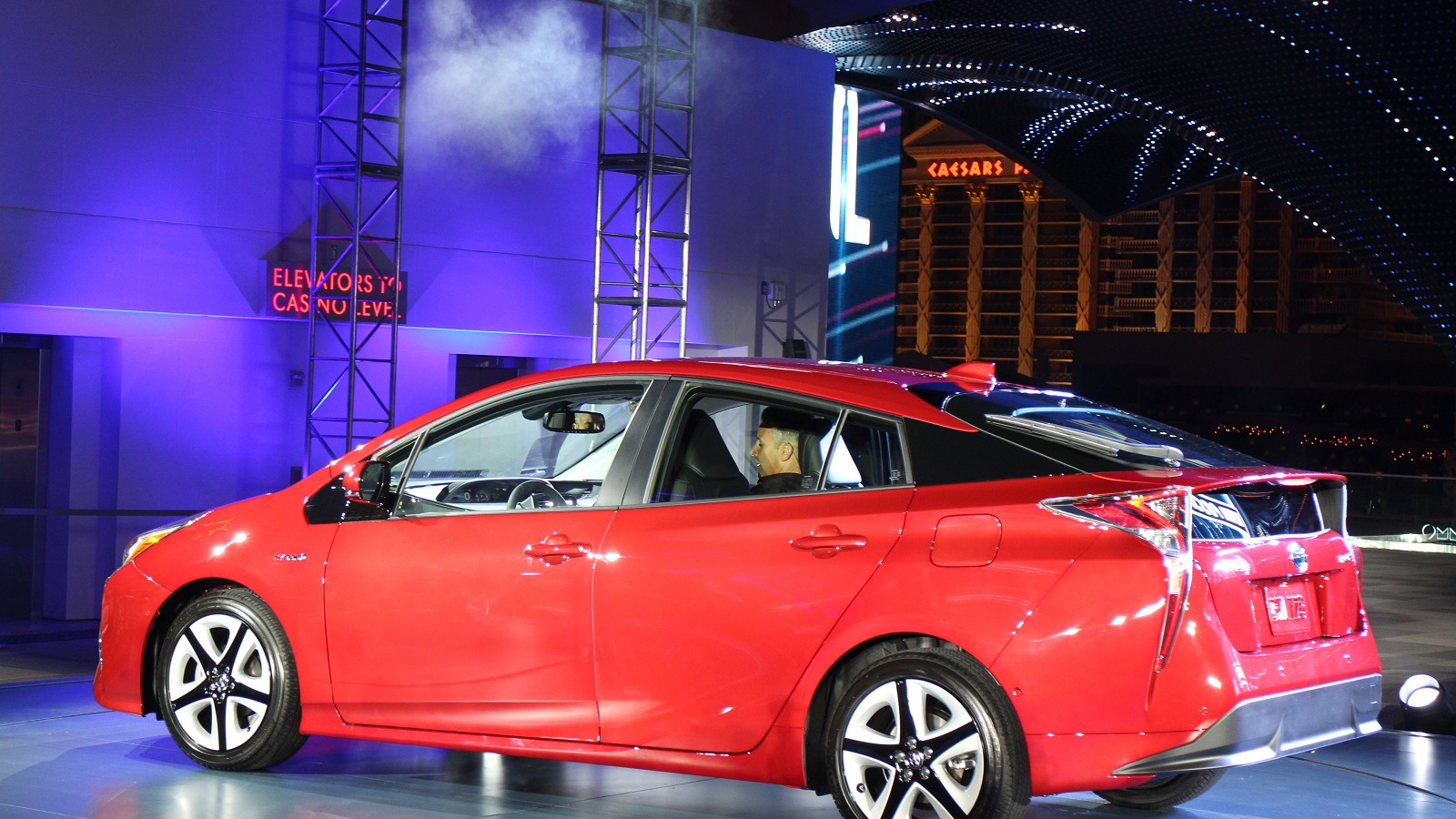 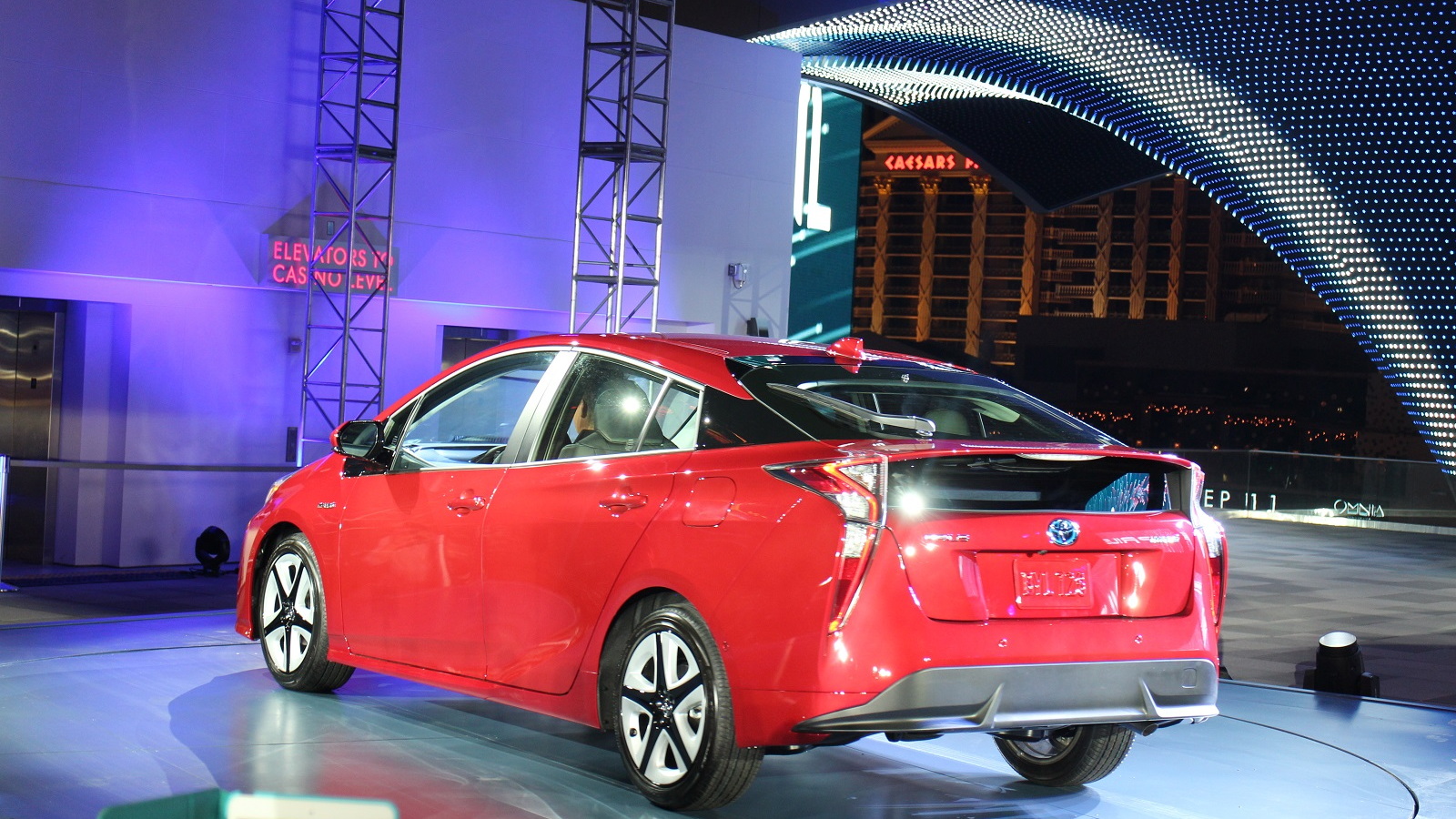 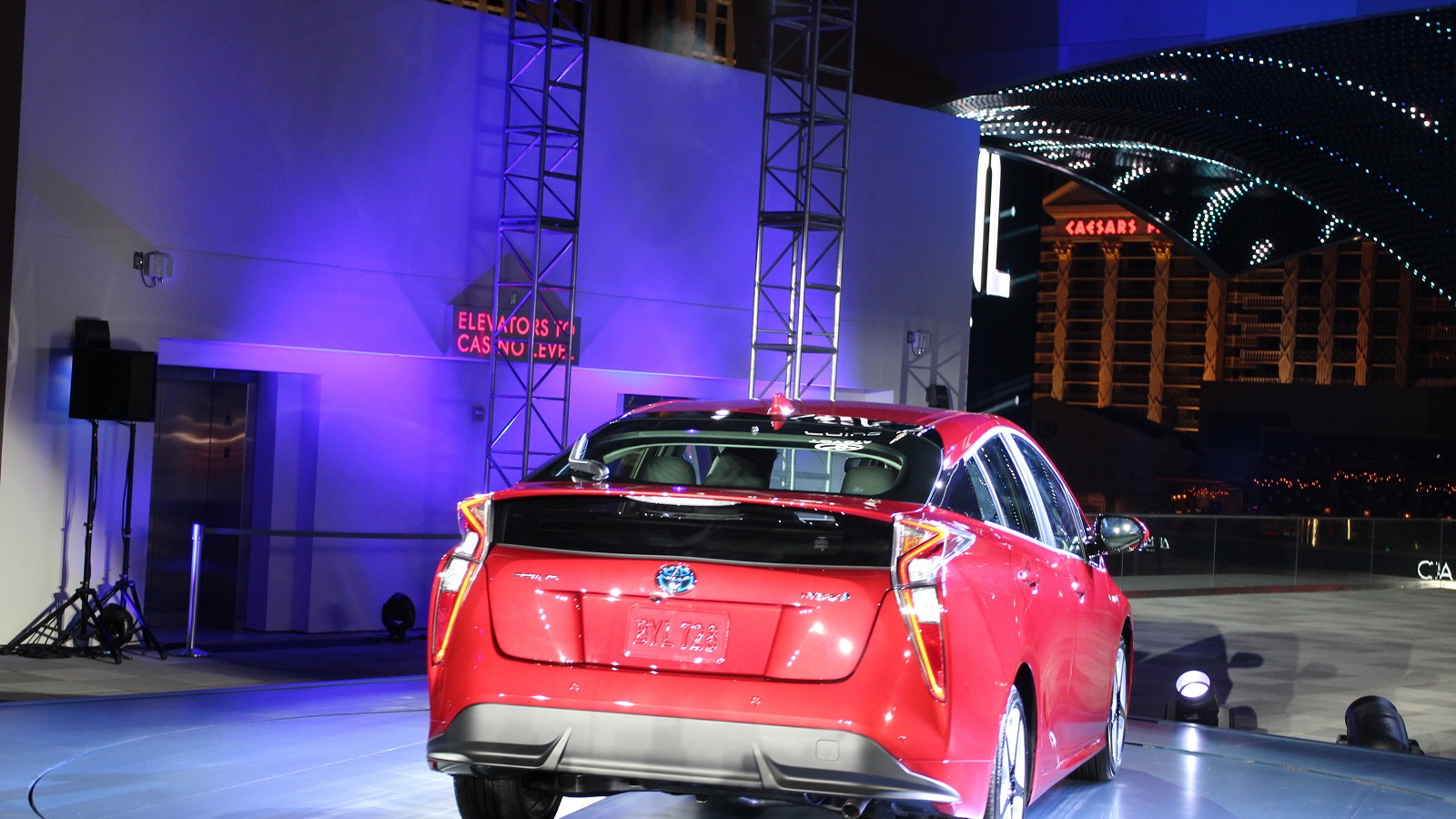 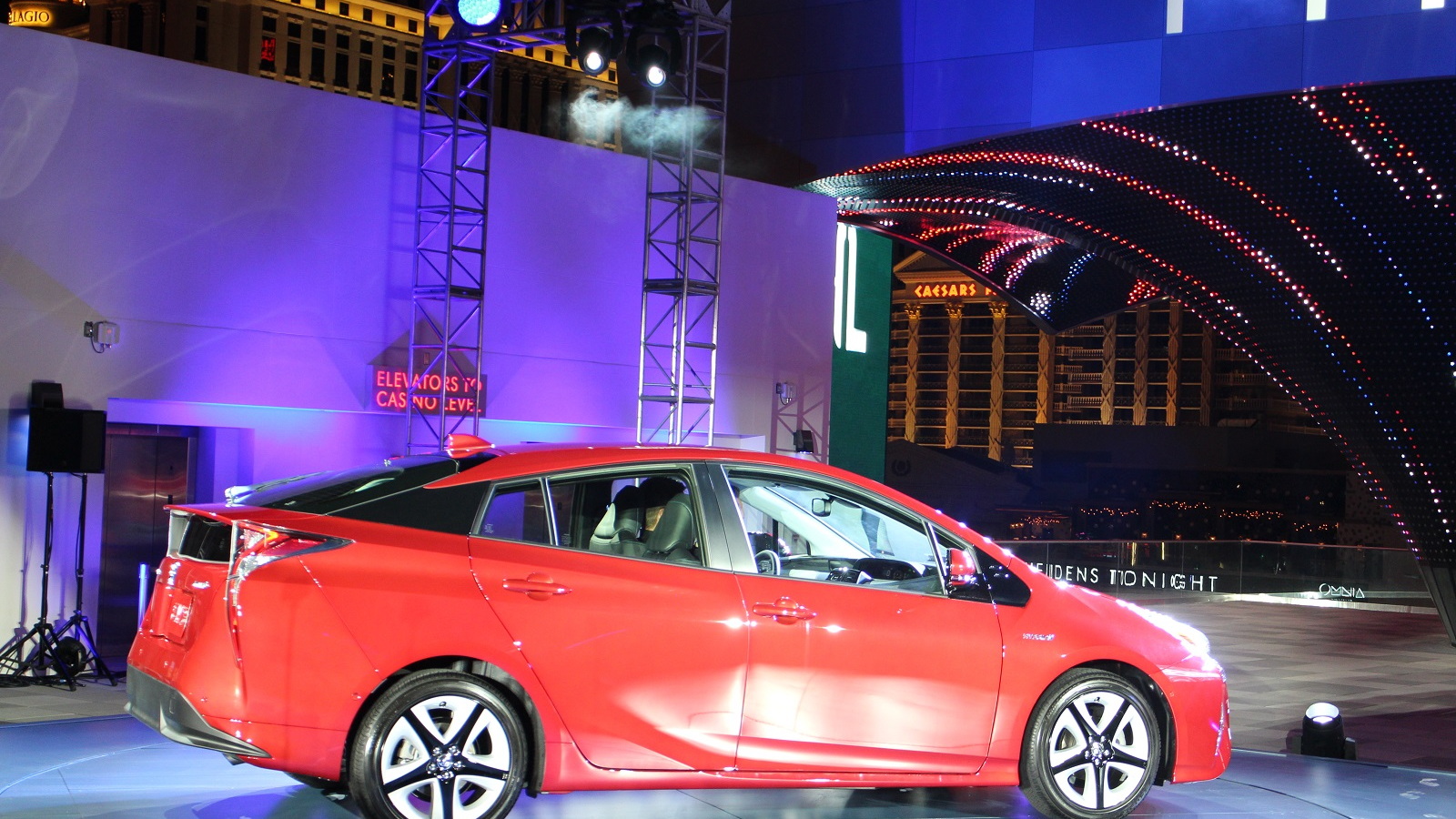 The new 2016 Toyota Prius hybrid made its debut in Las Vegas Tuesday evening, where 350 guests watched the latest model of the world's most popular hybrid car raised into the night sky at an elaborate event to mark its global launch.

But "it's not just about MPG any more," according to the press release--and that's the message from the launch event too: The new 2016 Prius is better-looking, more fun to drive, and safer than ever.

It will also earn an EPA rating of about 55 mpg combined, retaining its "highest MPG without a plug" title, as Toyota proudly proclaims.

DON'T MISS: 2016 Toyota Prius: What We Want To Know About All-New Hybrid

The company projects a 10-percent improvement in fuel efficiency for the base model; that would mean going from the current car's 50 mpg combined to 55 mpg combined.

The company has engineered each component of the Hybrid Synergy Drive system to be smaller and lighter, with greater energy density in the battery, and an internal-combustion engine capable of more than 40 percent thermal efficiency under some operating conditions.

And, Toyota says, "a soon-to-be unveiled Eco model will achieve an even greater improvement" in fuel efficiency--possibly even to the rumored 60-mpg mark.

The lines of the new five-door liftback make it instantly recognizable as a Prius, but the nose is lower, the tail is higher, and the peak of the roof has been moved forward.

From the front, standard LED headlamps make the front light units smaller. The three points of their housings--which have sharply angled chevron shapes--extend back along the fender, toward the center of the grille, and down toward the ground.

Toyota notes that the front badge is at exactly the same height as it is on the Scion FR-S sports car, underscoring just how low the front really is.

A continuous character line runs along the side of the new Prius, with another starting in the rear door and wrapping into the rear tailgate spoiler.

The rear light units differ greatly from those of the current Prius, wrapping around the corners of the high back end but then dropping a long way down, in almost a question-mark shape, toward the bottom rear corners of the car.

The roof pillars are blacked out, giving the body-color roof panel a floating look at the rear--a clear tie to the styling of the Toyota Mirai hydrogen fuel-cell sedan.

Overall, the lower front end and the side accents lines give the car a slightly sleeker look from the side, while the pillar treatment and rear body creasing disguise the height of the tail somewhat.

A new paint color, Hypersonic Red, gives what the company calls a "deep and vibrant luster" that highlights the new Prius's form. Seven colors will be available on launch.

Toyota says its shape was "inspired by a runner in the starting blocks" and "conveys a feeling of forward motion."

The rear view, however, will likely be an acquired taste.

Overall, the fourth-generation Prius is 2.4 inches longer, almost an inch lower, and half an inch wider than the outgoing 2015 model--and provides more occupant room and cargo volume.

Inside, the Multi-Information Display remains centered in the wide dashboard at the base of the windshield, but it is now a full-color screen.

A second, Mirai-like pod at the top of the center console houses two air vents above a color display for the navigation and other functions, with the characteristic "Prius shift stick" below it.

Toyota has dispensed with the polarizing "flying buttress" console, and now offers a more conventional bin with a padded top between the two front seats.

The seats are "form-hugging," the company says, and it promises improved visibility from the driver's seat.

And in a new fillip, Toyota says that "available premium white ornamentation" for lower trim areas of the cabin is "reminiscent of bone china." We'll be curious to see how that plays out in the light of day.

The 2016 Prius is the first of what will likely be more than a dozen vehicles built on Toyota's New Generation Architecture, or TNGA.

It's essentially a set of components on which multiple sizes, styles, and models of vehicle can be designed, with the goal of spreading development costs and expensive components across a higher number of vehicles each year.

Toyota suggests that it can improve the efficiency of developing new vehicles using TNGA by 20 percent, and that it will put the savings back into developing advanced technologies and making its products more appealing.

One advantage of the new system, Toyota claims, is that it will provide for a "fun-to-drive hybrid" with a "planted on-road presence" stemming from a more responsive suspension and a lower center of gravity.

Specifically, the Prius now uses an all-new double-wishbone rear suspension for better feedback and greater control in any driving situation.

Body rigidity has been improved, for less flex during cornering--while preserving occupant comfort and ride quality--as well as improved safety during crashes.

The theme of a more-fun Prius has been promised for several years, in fact, and is one of the mandates CEO Akio Toyoda--a race driver in his earlier years--laid down for his product development teams: Toyotas should be more compelling on the road.

Fun-to-drive in no way conflicts with the Prius's safety record, however.

The 2016 Toyota Prius will be among the first models in the U.S. to offer a package called Toyota Safety Sense (TSS), which wraps together a number of advanced safety technologies. Those include:

Toyota is clearly proud of the new generation of its most iconic model, but it wants the car to expand beyond its current image and attract new buyers.

"This Prius will invite new drivers into the category by delivering an impressive look and feel," said group vice president and general manager Bill Fay, "built on the foundation of safety and eco-consciousness that define[s] the vehicle’s heritage.”

The new 2016 Toyota Prius is now "breaking its own boundaries with more engaging style and fun-to-drive dynamics,” he said.

“What was once a rational purchase--that for many customers focused on fuel economy--is now so much more," Fay concluded.

Since the first Prius launched in Japan in 1997, more than 3.5 million Priuses--and a total of 8 million hybrids across more than two dozen models--have been sold.

We look forward to driving the latest model, and finding out whether Toyota has delivered on its promise of a more fuel-efficient vehicle that's also more fun to drive.

We'll update this article with more information and specifications about the car as they become available.