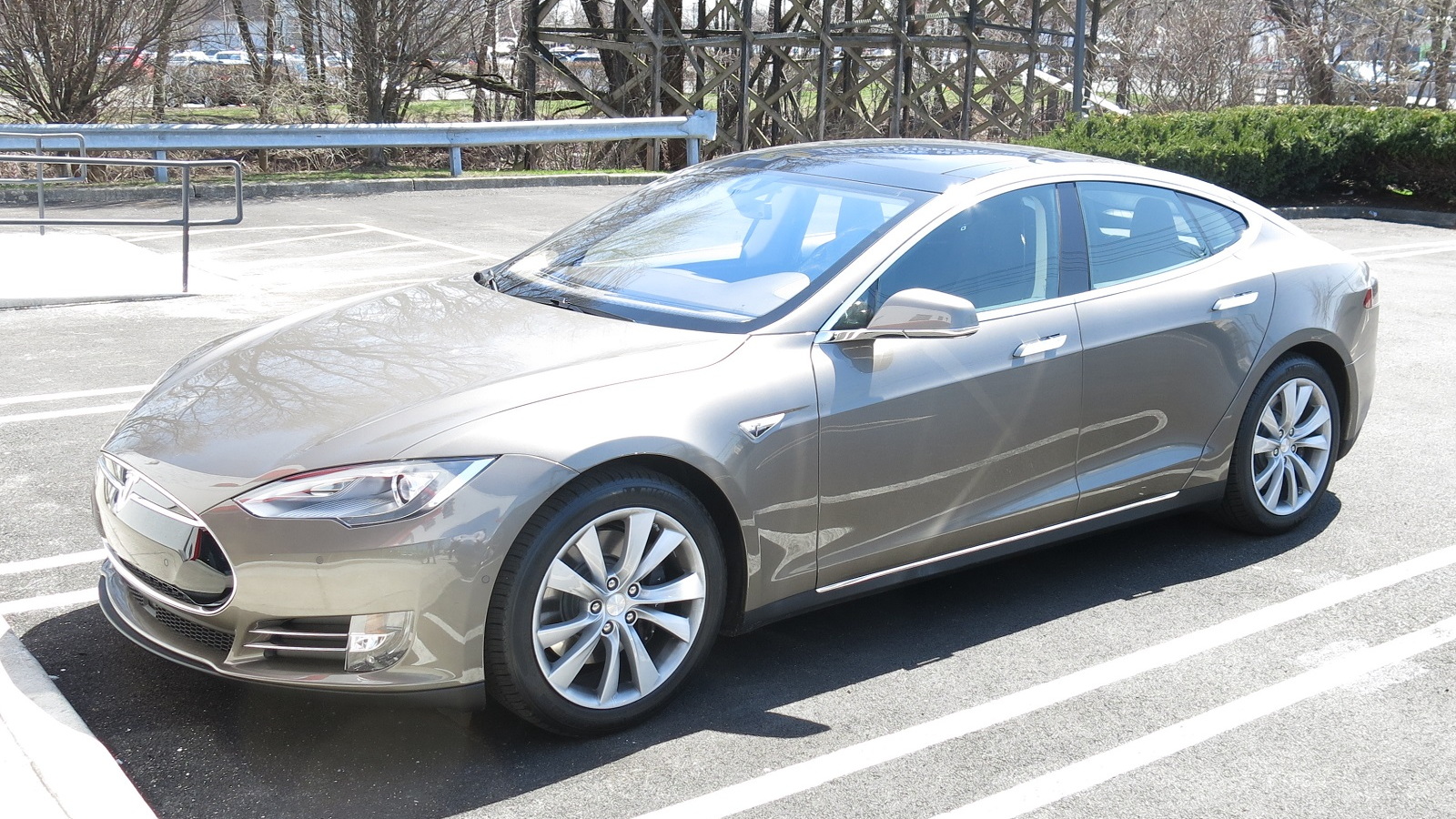 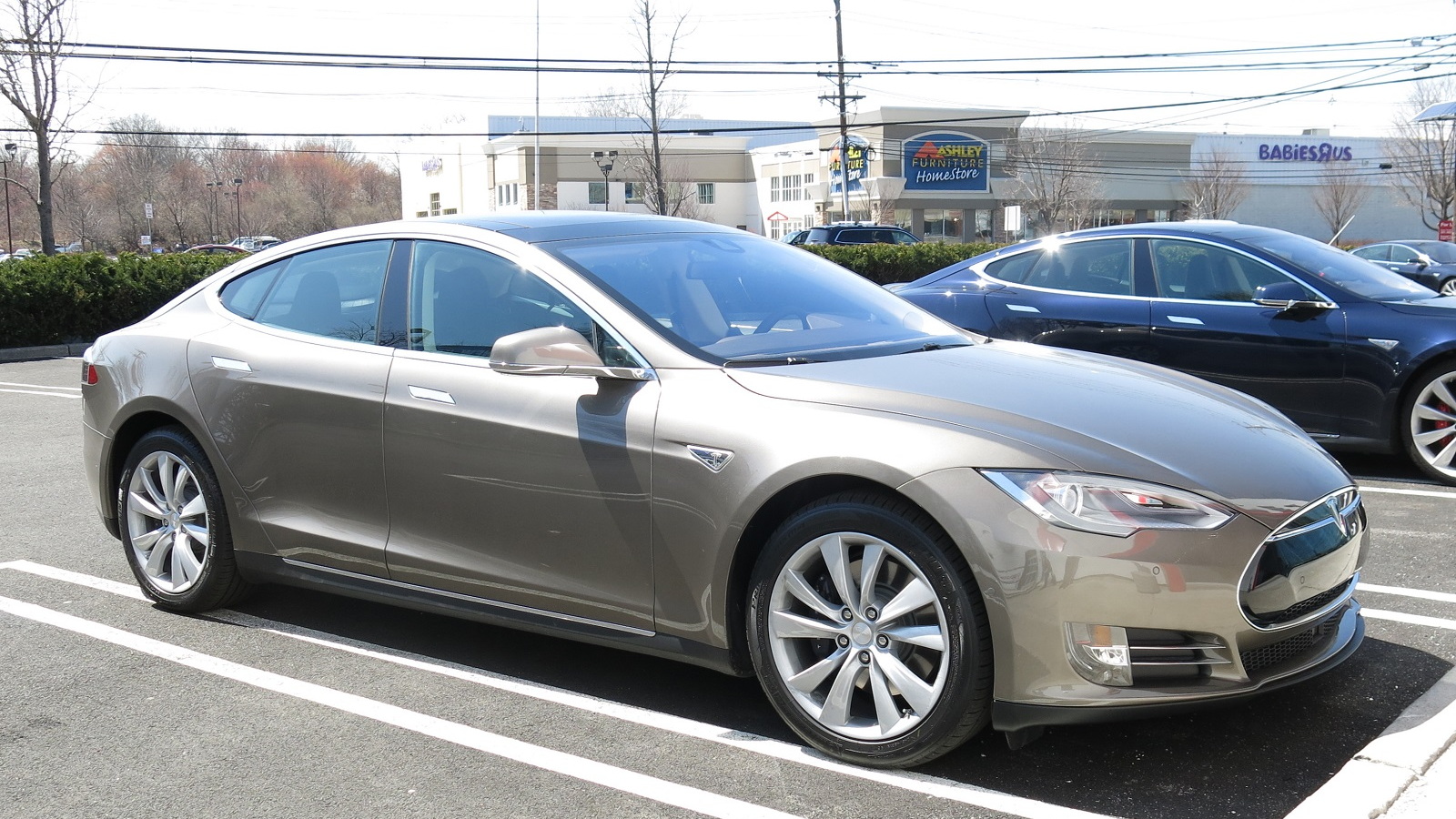 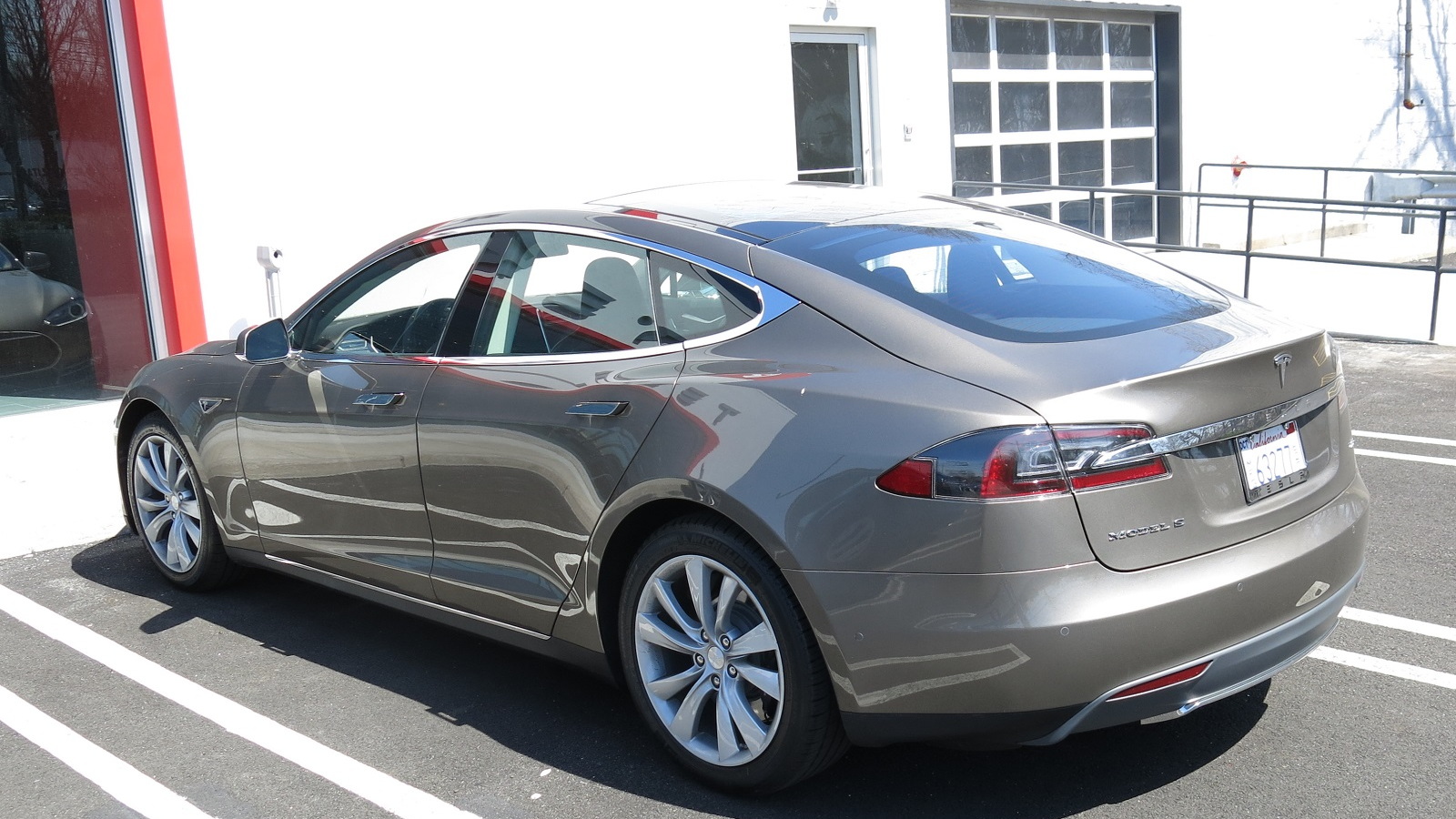 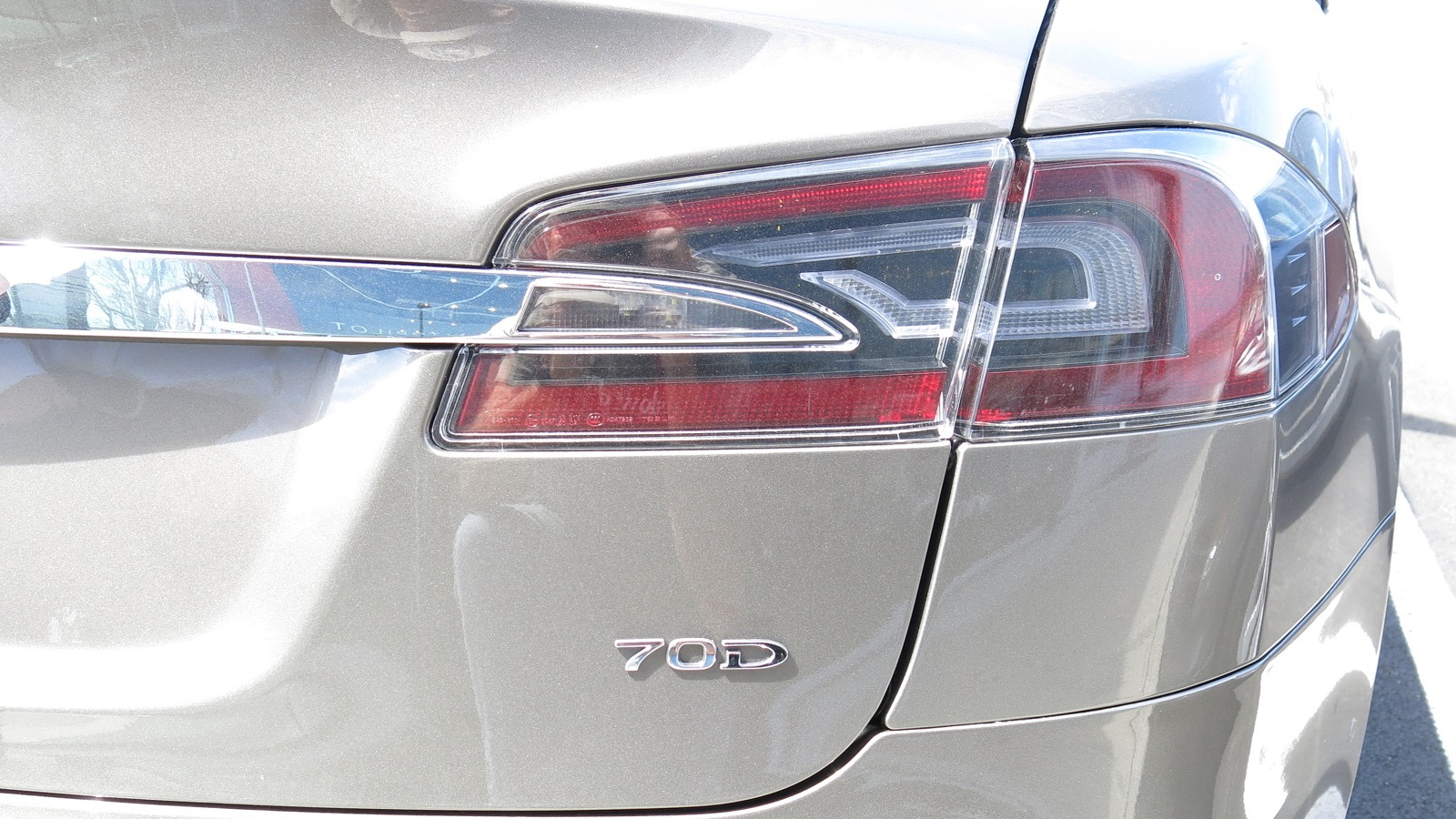 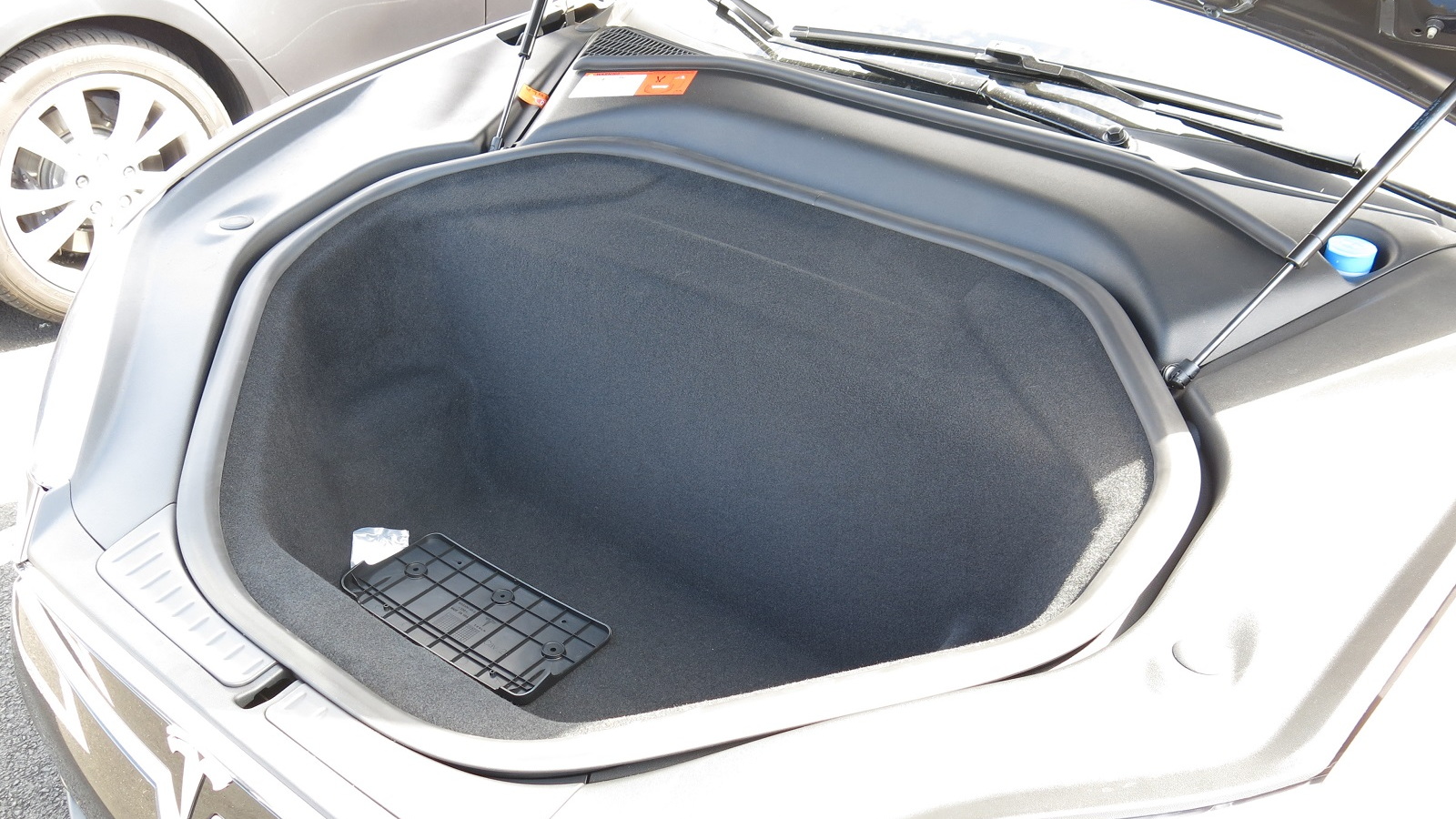 Last week, the new base version of the Tesla Model S, known as the 70D, hit the electric-car world like a thunderclap.

No early-warning publicity, no teasing tweet from Elon. Just the sudden appearance on the Tesla website configurator of the new model--with dual motors, all-wheel drive, a 70-kWh battery that gives it an EPA range of 240 miles, and a base price of $75,000.

It was already in production, with 70Ds arriving in some Tesla stores within days of the unveiling.

You can buy one now for delivery in 6-8 weeks, same as the other Tesla models.

The new 70D replaced the 60-kWh version of the Model S. After nearly two years as the company’s entry-level price leader, the 60 has been unceremoniously deep-sixed.

As the owner of a 2013 85-kWh Model S, I was curious to see how this low-priced upstart compared head-to-head with my car.

I was able to arrange a test drive at the Tesla showroom in Paramus, New Jersey, earlier this week.

Although not a complete evaluation, my 30-mile drive, mostly on the highway, was enough to persuade me that Tesla clearly has a winner in the 70D.

Some potential buyers on the financial fence have bemoaned the 70D’s $5,000-higher price tag, which puts the new entry-level Model S just that extra bit farther out of reach.

But the 70D is a significantly better car, well worth the extra tab in my opinion. Pay a little more, get a lot more.

If the 70D hits its numbers in the real world, it should be a resounding sales success, stealing a lot of customers from the more expensive 85 and 85D.

In fact, I wouldn’t be surprised if the single-motor 85 soon follows the 60 into oblivion. My guess is that Tesla, like Subaru, will soon be selling only AWD cars. The 70D is such a compelling vehicle that settling for two-wheel drive no longer makes much sense.

The 70D is clearly superior to the 60 it replaces. Its advantages are legion:

Given the typical spacing of Superchargers along Interstate highways, those 32 extra miles will make a big difference on cross-country Interstate trips.

As a former 60 driver, I spent way too many hours freezing in the slow lane, trying to stretch my range to get to the next Supercharger on cold days. That should rarely be necessary with the 70D.

*All-wheel-drive. AWD’s superiority goes without saying to those of us in northern climes, especially after this last brutal winter.

But even Sun Belters can appreciate the more balanced handling, tire wear, and superior traction in the wet.

*Efficiency  The 70D’s EPA efficiency rating is 101 MPGe, six percent better than the  60’s 95 MPGe. (Miles Per Gallon Equivalent measures the distance a car can travel electrically on the same amount of energy as contained in 1 gallon of gasoline.)

(How does Tesla make a heavier, better-performing, AWD car more efficient? The key is the dual motors, which can be tuned and geared separately to operate more in their peak efficiency zones.)

*Supercharging   The 70D comes standard with Supercharging capability, a $2,000-dollar option on the 60. Apples-to-apples, that cuts the price difference to just $3,000.

*Navigation and Auto-locking  Tesla has made these two features (and a few others) standard on the 70D, as well as the 85, 85D, and P85D. Previously, they were part of the optional $4,250 tech package, which has now been eliminated altogether.

These two features add $2-3,000 to the value of a 70D, cutting the apples-to-apples price difference with the 60 to essentially zero.

Bottom line:  If you’ve ordered a 60-kWh Model S recently, but haven’t yet taken delivery or handed over the check, cancel your order immediately and go for the 70D.

The 70D is so compelling that it challenges the more expensive single-motor 85-kWh Model S that has been the company’s bread-and-butter model for nearly three years now.

Sadly, during my test drive, I didn’t have the opportunity for a side-by-side drag race with my 85.

But a few bouts of pedal-stomping in the 70D left me with the impression that it might be a tad faster than my car from 0-30 mph, and perhaps a bit slower from 30 to 60 and beyond.

In the real world, any difference is negligible. Both cars have exhilarating performance that is more than sufficient for any conceivable real-world situation.

In local daily driving, this difference is of no consequence; range anxiety will never be an issue for either car.

For long cross-country trips, the 85’s  range advantage is small, but real. The 70D driver will have less of a range reserve to account for unexpected headwinds or detours. He may occasionally have to slow down to stretch his range a bit, or make an extra Supercharger stop once in a while.

But this difference will becomes less and less important as Superchargers continue to proliferate around the country.

Over two-plus years, I’ve averaged 325 Wh/mi in my car.  A 70D would theoretically push this number down into the 280-290 Wh/mi range. To a hawk-eyed energy-watcher like me, that’s a big difference.

But it’s a difference I didn’t see in my brief test drive.

In my own car, during the 70-mile round-trip drive to the Tesla store, I averaged 289 Wh/mi.

Under virtually the same driving conditions—warmish temperatures, a mix of suburban and Interstate driving—my 30-mile test drive in the 70D averaged out to 292 Wh/mi.

For now, I’ll remain a bit of a skeptic on the 70D’s real-world efficiency numbers.  I hope further, more precise testing proves me wrong.

But both cars are so efficient that any difference is almost trivial. At 12,000 miles a year, the 70D would theoretically save maybe $5 a month in electricity costs over the 85. Or less, depending on how much the driver partakes of  free Supercharger juice.

So the bottom-line trade-off becomes this:  With basically the same performance, do I give up 25 miles of range for all-wheel-drive and $5,000 cash in my pocket?

My guess is that most people will answer that question “yes.”

The 70-kWh battery pack will fit nicely into the upcoming Model X, virtually assuring that even the low-price entry-level version of the X will have an EPA range above the magic 200-mile mark.

And if the 70D does indeed make the single-motor 85 obsolete, as I think it will, Tesla will be able to consolidate its Model S and Model X production lines to an all-dual-motor configuration.

More Cells Or Better Ones?

A big question that Tesla buffs have been asking:  does the increase in battery capacity from 60 kWh to 70 kWh come from more of the same old battery cells, or the same number of improved new cells in the old 60-kWh battery pack?

We’ve been hearing for several years now that lithium-ion battery technology has been improving by 6-8 percent a year. The Model S is approaching three years in the marketplace; so where’s our 20-percent battery improvement?

(And don’t forget that Tesla recently announced its Roadster 3.0 upgrade, which included new battery cells  that are 31 percent more efficient than the 2008-vintage originals. They helped  boost range from 240 miles to almost 400.)

Did the 70D’s extra range came from simply replacing the 60’s 2012-era cells with new ones that are 15-percent more efficient?

If so, that means that the Holy Grail of a 100-kWh Model S with a 320-mile EPA range—essentially the current 85 refitted with the same new cells—could be just around the corner.

A Tesla spokesman confirmed to me that the bigger battery capacity comes from more cells, not better ones.

The traffic-aware cruise control worked great, keeping a specified distance behind the car in front of me, no matter what the car did. If the car ahead moved to a different lane, the Tesla would quickly move up to follow the next car in line.

The driver can select a following distance from two to seven car lengths. As a confirmed tailgating-phobe, I always selected seven, which seemed sufficient up to about 60 mph. Above that, I felt like I was following too closely, which left me in a state of constant uneasiness at higher speeds.

But of course the car’s attention level and reaction time are far superior to mine, so I imagine the seven-length gap was actually perfectly safe. Still, following that closely at 75 mph would take some getting used to.

The lane-departure warning I found to be an annoying pain in the butt—at least on busy multilane roads like New Jersey Route 17 and the Garden State Parkway.

Normal maneuvering through traffic triggered the juddering buzz in the steering wheel every few seconds. I shut it off after a minute or two, and can’t imagine a situation where I’d turn it on.

Fortunately, I never got the chance to experience the auto emergency braking.

The 70D is an impressive car.

But is it impressive enough to consider trading in my 85 for one?

The devil on my left shoulder taunts me mercilessly: my 85 can’t get out of my driveway on many winter days, doesn’t have navigation or auto-locking, will never have any autopilot features, is 12-15 percent less energy-efficient than the 70D, and is approaching the end of its warranty period.

The angel on my right shoulder counters by pointing out my car’s 25-mile range advantage, its impeccable record of reliability, and suggests that my daughter’s college tuition might be a more sensible ways to spend  $30,000 or so.

But I must admit:  I asked the guy at the Tesla store to come up with a trade-in quote for my car.

Just out of curiosity, of course.