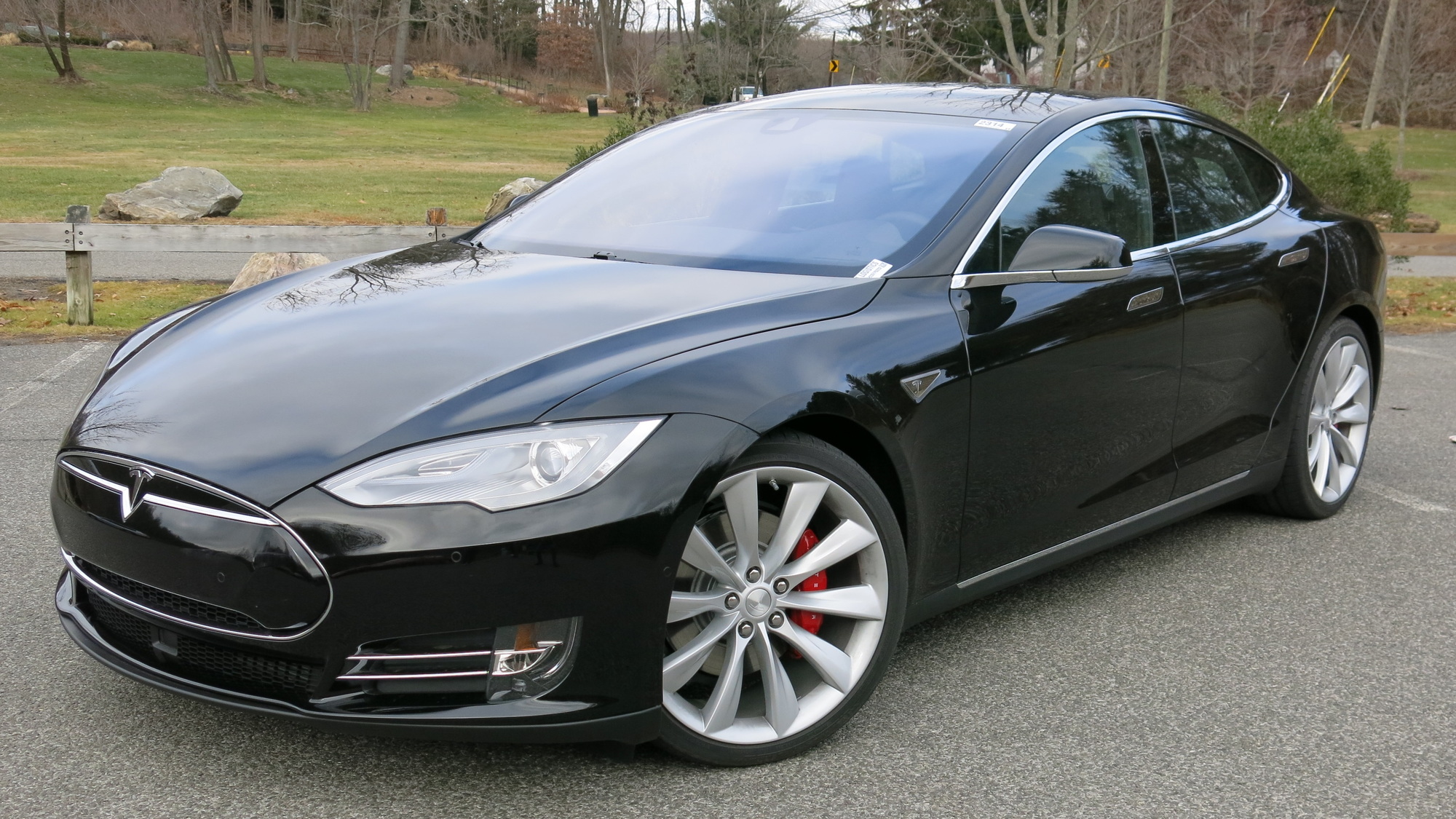 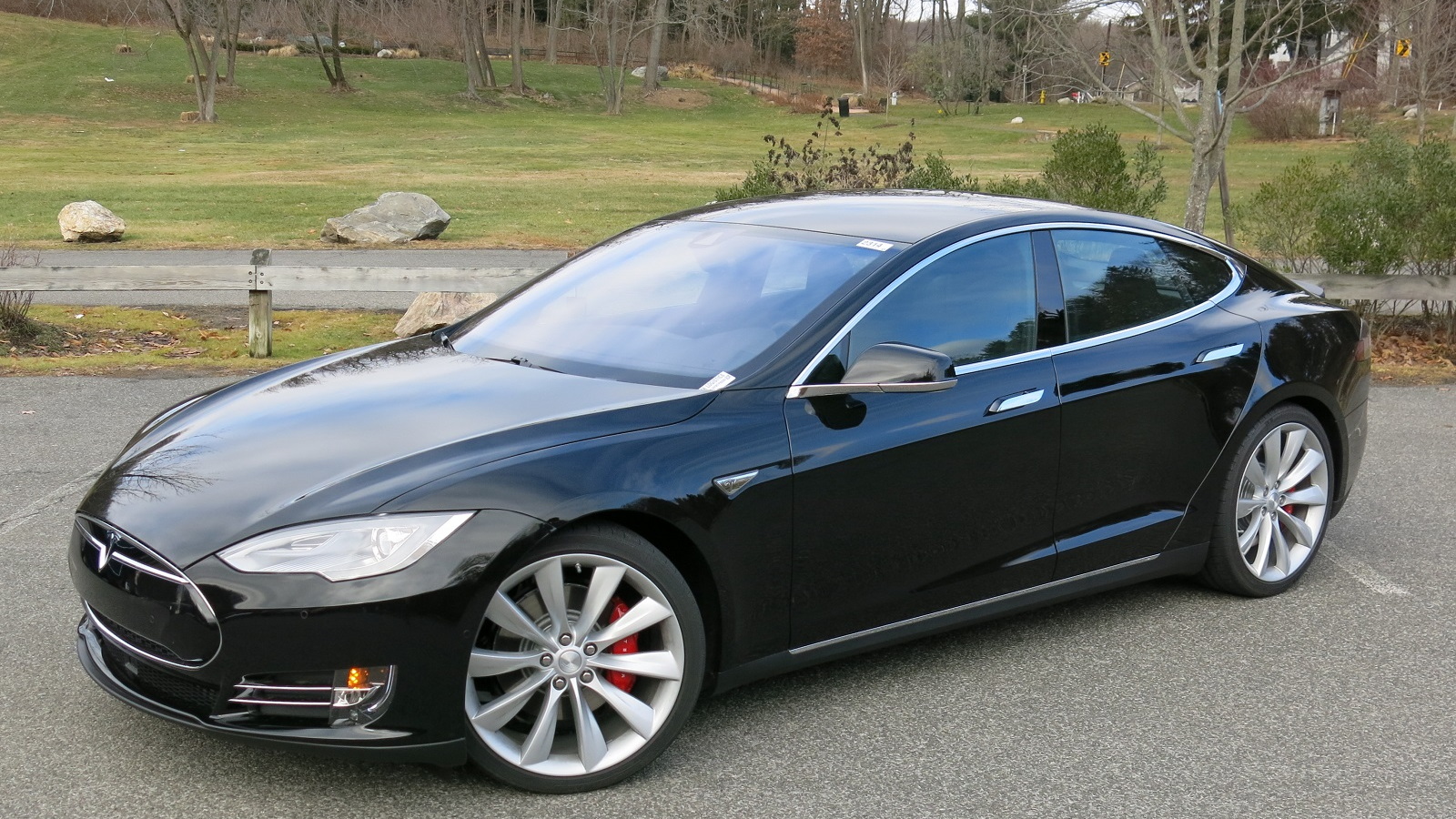 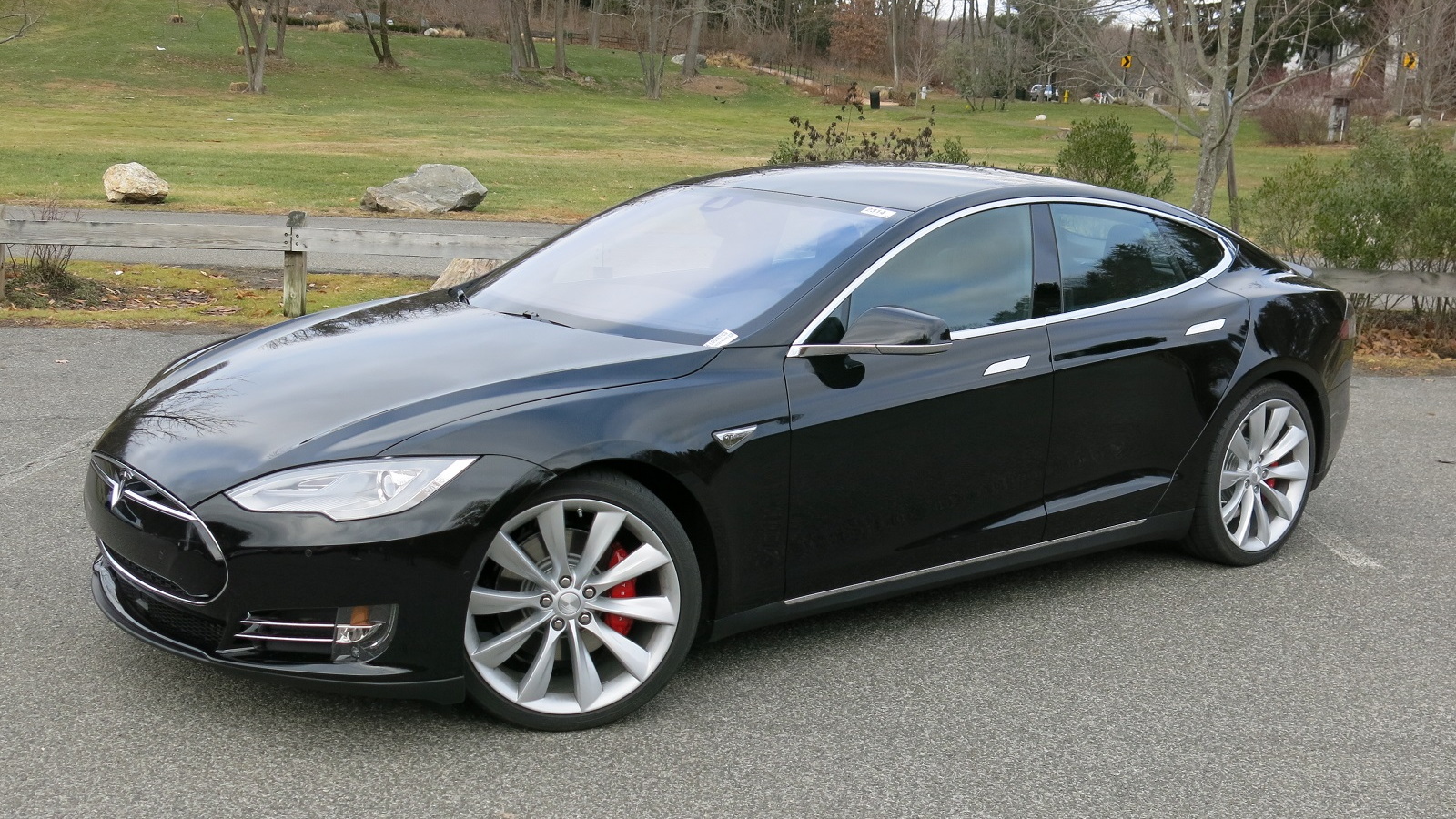 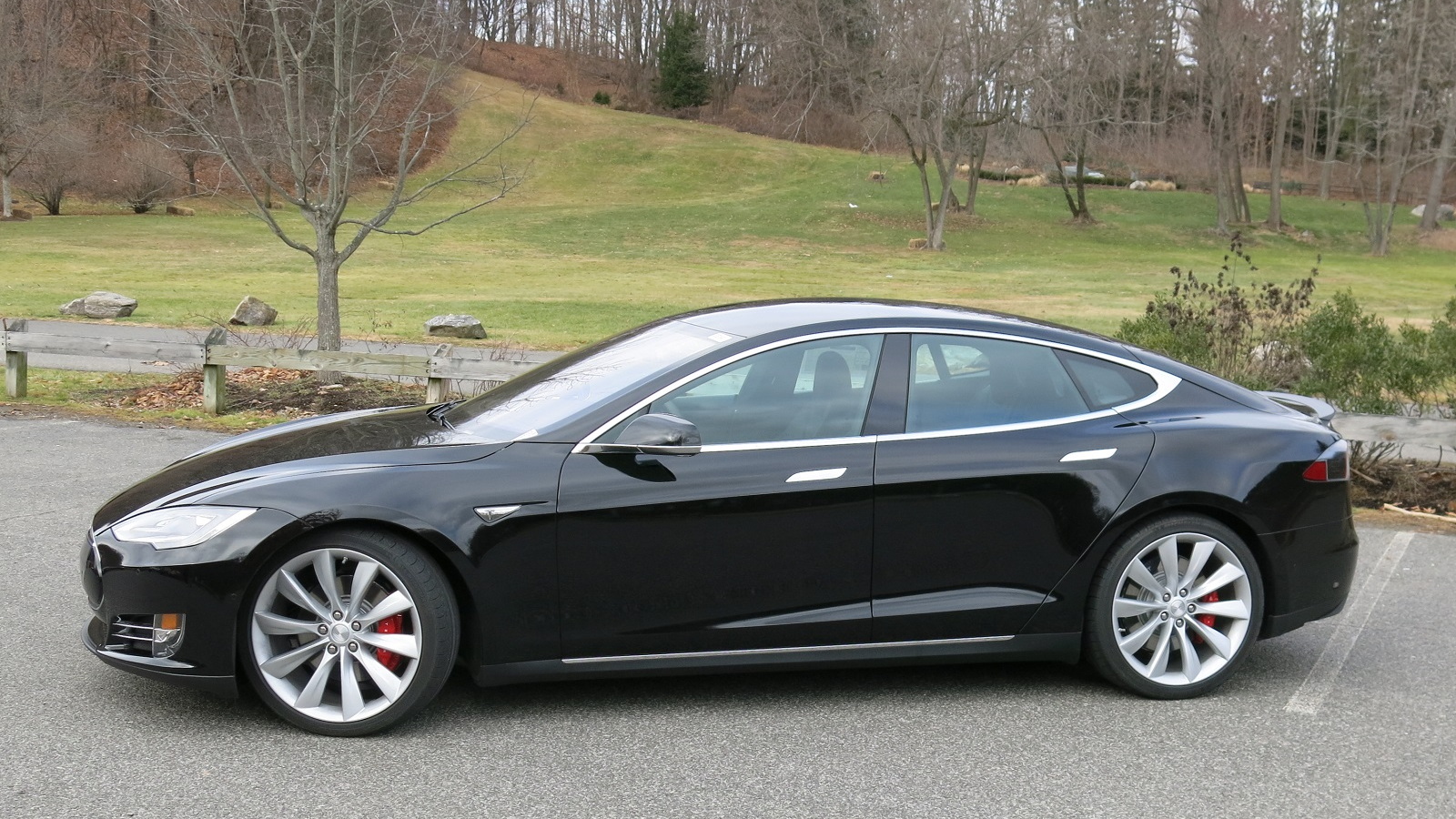 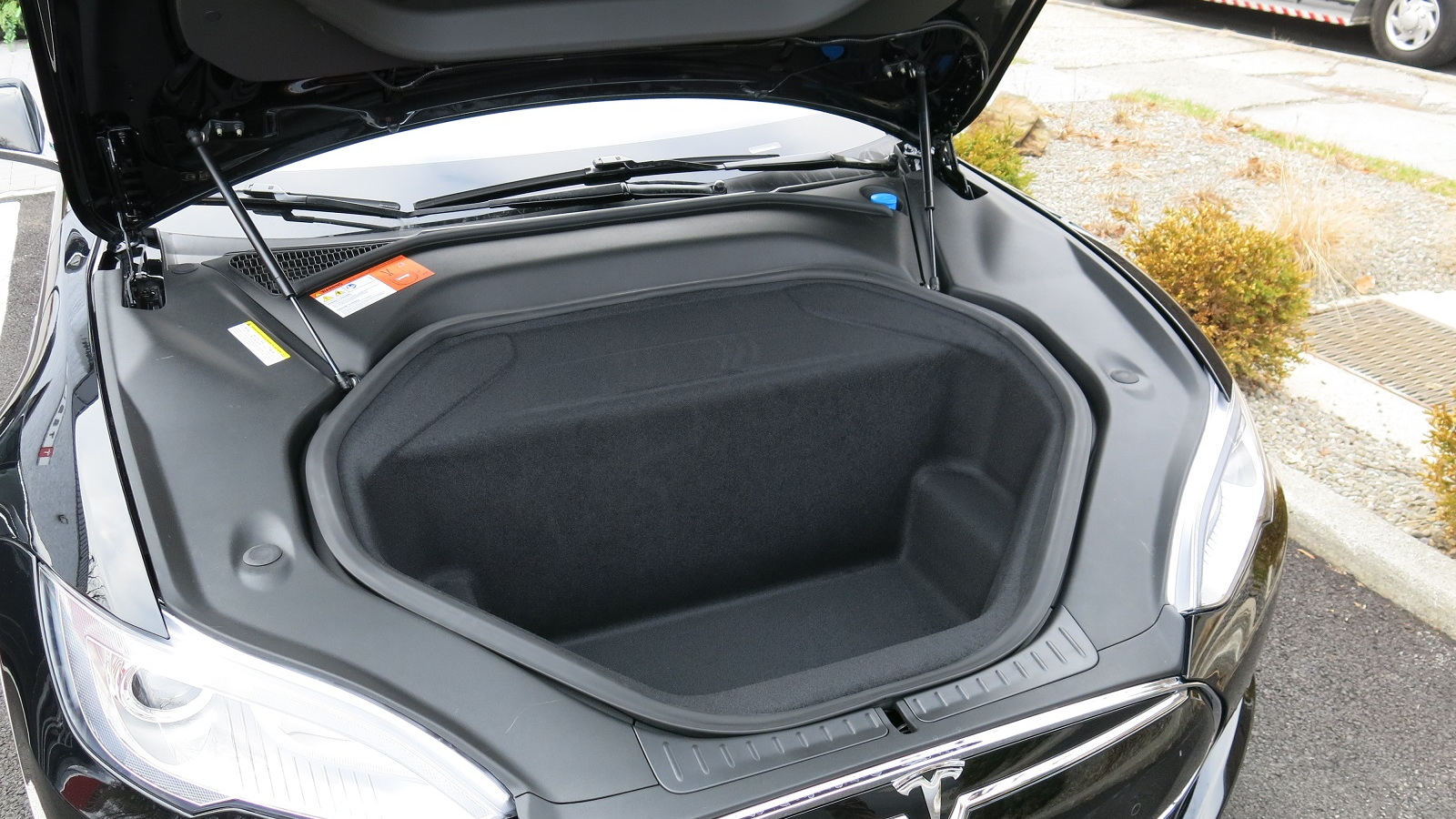 As a long-time Tesla Model S owner—almost two years now—I was naturally eager to get behind the wheel of the new dual-motor P85D.

I’d had a couple of brief stints in 416-hp P85 loaners while my standard S85 was in for service. Those had been exhilarating enough, almost scary.

What would it be like to drive a Model S with 691 hp and all-wheel drive? And what about all that new autopilot stuff?

The first P85D arrived on the East Coast about 10 days ago, making its public debut at the opening of the new Tesla gallery/service center/Supercharger in Paramus, New Jersey.

I was able to arrange a test drive last week at the Mount Kisco, New York, store/service center.

The car, in basic black,  was fitted with 21-inch wheels, high-performance Michelin tires, and virtually every bell and whistle except the panoramic roof. List price was about $130,000.

Okay, let’s get the big question answered right up front: How’s the acceleration?

The raw number is well known by now: 0 to 60 mph in 3.2 seconds, the same as the McLaren F1, the legendary million-dollar supercar that Elon Musk drove (and crashed) in his younger days.

It's the quickest 0-to-60-mph time of any sedan in the world.

But the number tells only part of the story. How does it feel?

With stratospheric expectations, and the “Insane” drive mode selected, I punched the accelerator for the first time at about 30 mph on an entrance ramp to the Taconic State Parkway.

The car leaped ahead with a preternaturally smooth and powerful surge, clearly quicker than my standard S85. In 2 or 3 seconds, we were in the 70-mph traffic flow.

Yet somehow,  I was a tad disappointed.

It didn’t feel all that much different than my S85. (Oh, how spoiled I’ve become.) Quicker, yes, but not an entirely new level of quickness.

It didn’t have the feel of getting hit from behind by a train, as a Motor Trend tester had reported. I didn’t feel dizzy, nor did I feel the skin flatten on my cheeks from the G-forces.

And I didn't give that involuntary roller-coaster scream of delight, the usual reaction of first-time Tesla drivers when they floor it.

Perhaps the 3.2-second number and the Motor Trend hyperbole had simply raised my expectations to an unattainable level.

After a few miles of darting effortlessly in and out of traffic, we exited for the return run on the Taconic.

This time the on-ramp was long and straight, and the traffic was light. With no cars behind me, I slowed to a complete stop, and punched the accelerator again.

Wham!  This time I got it. Cheeks flattened, stomach squeezed, blood rushed to the back of my head. For the first time in a car, I felt G-forces reminiscent of my days as a pilot.

And of course I couldn’t help screaming in delight.

ALSO SEE: Life With Tesla Model S: Tires Cost Me More Than My 'Fuel' Does

That’s faster than one of Elon Musk’s SpaceX Falcon 9 rockets, which would theoretically pull 1.15 G if launched horizontally.

Clearly, Tesla engineers have tweaked the torque curves and gearing of the two motors to maximize stoplight performance, not highway passing performance.

Which makes sense; the acceleration of even a standard S85 is already plenty good enough for any conceivable real-world passing situation.

But as any street racer will tell you, you can never have too much stoplight performance.

Tesla sells a lot of cars based on those screams of delight in the first second or two after the throttle is floored. With the P85D, they’re going to sell a lot more.

I am no high-performance driver, and totally unqualified to evaluate the P85D’s handling envelope.

But in my brief stint of semi-normal driving, the car felt very solid, almost glued to the ground in a way that my S85 is not. The suspension is firm but not harsh, perfectly comfortable in normal driving.

In addition to the second motor up front, the P85D has a number of new features. Among them:

*Autopilot  The P85D is equipped with 12 ultrasonic sensors, a forward-looking radar, and forward-looking camera. With future software updates, this will eventually allow automatic lane- and distance-keeping with other cars, speed management, and collision avoidance.

For now, however, the autopilot has only two functions, neither particularly eye-opening.

First, there’s a lane departure warning. If the camera senses the car getting too close to a white line, the driver feels  a gentle three-pulse vibration of the steering wheel—not unlike the effect of lane-departure warning grooves on some highways.

It works fine, but it’s not a big deal.

Second, the camera reads speed limit signs, and if you go over the limit, the speedometer arc turns red above the limit. (Thankfully, the driver can set the warning threshold at any desired increment above or below the posted limit.)

RELATED: Tesla Model S Dual-Motor Is Quicker, Has Higher Range Too: How Do They Do That? (UPDATED)

I found this feature utterly useless because I never, ever look at the speedometer arc on the instrument panel. I only pay attention to  the digital speed readout.

*Front seats. They are more comfortable and supportive than the old ones, with excellent side support for both thighs and back. I felt like the seat was gently gripping my entire body.

After an hour or so in the new seat, getting back into my car for the drive home was a serious bummer for my butt.

*Steering column controls. On my very first test drive of a Model S, three years ago, I was immediately annoyed by the odd placement of the turn signal lever, canted well down from the horizontal.

(Mercedes-Benz owners will know the feeling, since the column stalks were taken wholesale from the Daimler parts bin.)

At last, the P85D now has the turn signal positioned correctly in the horizontal position, with the the cruise control below it. I was told that all Model S’s have been coming from the factory this way since October.

Of course, after two years of being conditioned to the previous illogical positions, during my P85D drive I once again repeatedly tried to signal turns with the cruise control lever.

But never mind. It’s one small ergonomic step in the right direction.  Except that now it’s hard to read the cruise control symbols on the stalk, because it’s partly hidden by the wheel spoke. Why not put the CC wand above the turn signal, where you can actually see it?  Maybe in 2017.

*Rear heated seats.  I didn’t try them, but I found the front seat heaters much better than those on my S85. On my car, the three heat settings all feel the same—too hot. I’m constantly turning them on and off to avoid fried buns.

The heaters on the P85D seem properly calibrated, with three settings that actually give three levels of perceived heat.

*No steering force adjustment.  My S85 has three settings for steering effort: comfort, normal, and sport, with ascending levels of steering effort required.  I have mine set to comfort. It’s incredibly smooth and easy.

The P85D offers only Sport mode, so I noticed the difference right away. But I quickly adjusted to the greater steering effort of the P85D, and when I got back into my car, the steering felt almost too easy.

Despite Tesla’s claim of improved efficiency with the dual motors, the P85D has an EPA range of 242 miles, down 9 percent from the 265-mile EPA range of all previous versions of the 85-kWh Model S.

But this lower number is due solely to an odd new EPA procedure that slaps a 10-percent range penalty on any electric car that has driver-adjustable charge settings. (Don’t ask.)

Cars certified under the old procedure, like the S85, get to keep their higher range figures.

Comparing apples to apples, the P85D actually has an old-EPA range of 269 miles, four more than the standard S85.

And in a few months, the P85D will be offered with 19-inch wheels and Michelin all-season tires, which should increase the new EPA figure to 250 miles and the old equivalent figure to 278 miles.

Despite its higher weight and stickier tires, the P85D has exactly the same EPA efficiency ratings as the standard Model S85: 89 MPGe and 38 kWh per 100 miles.  With the new wheel/tire combo, those numbers should improve slightly.

A glut of trade-ins?

The P85D looks like a winner to me, and apparently other Model S owners agree.

The parking lot of the Paramus gallery is almost full of Model S trade-ins from owners stepping up to the P85D. (They apparently didn’t want to reduce their trade-in values by continuing to drive their cars while waiting for delivery.)

My guess is the upcoming S85D will do even better.

With all-wheel drive, a range 10 to 15 miles better than a standard S85, and, eventually, the new autopilot system, it’s going to create a huge supply of traded-in single-motor Model S cars.

Electric Car: 2019 Nissan Leaf to cost $30,885, long-range battery... Motor Trend: BMW EVs On The Way? Tesla Model: Tesla Model X gets new 75D base version, replacing 70D... BMW I3: Watch The BMW i3 Electric Car Park Itself, As Owner... BMW I3 Electric: Some BMW i3 Electric-Car Owners Get Expanded Free Fast... Model S85: How Financial Analysts (And Many Others) Misunderstand...