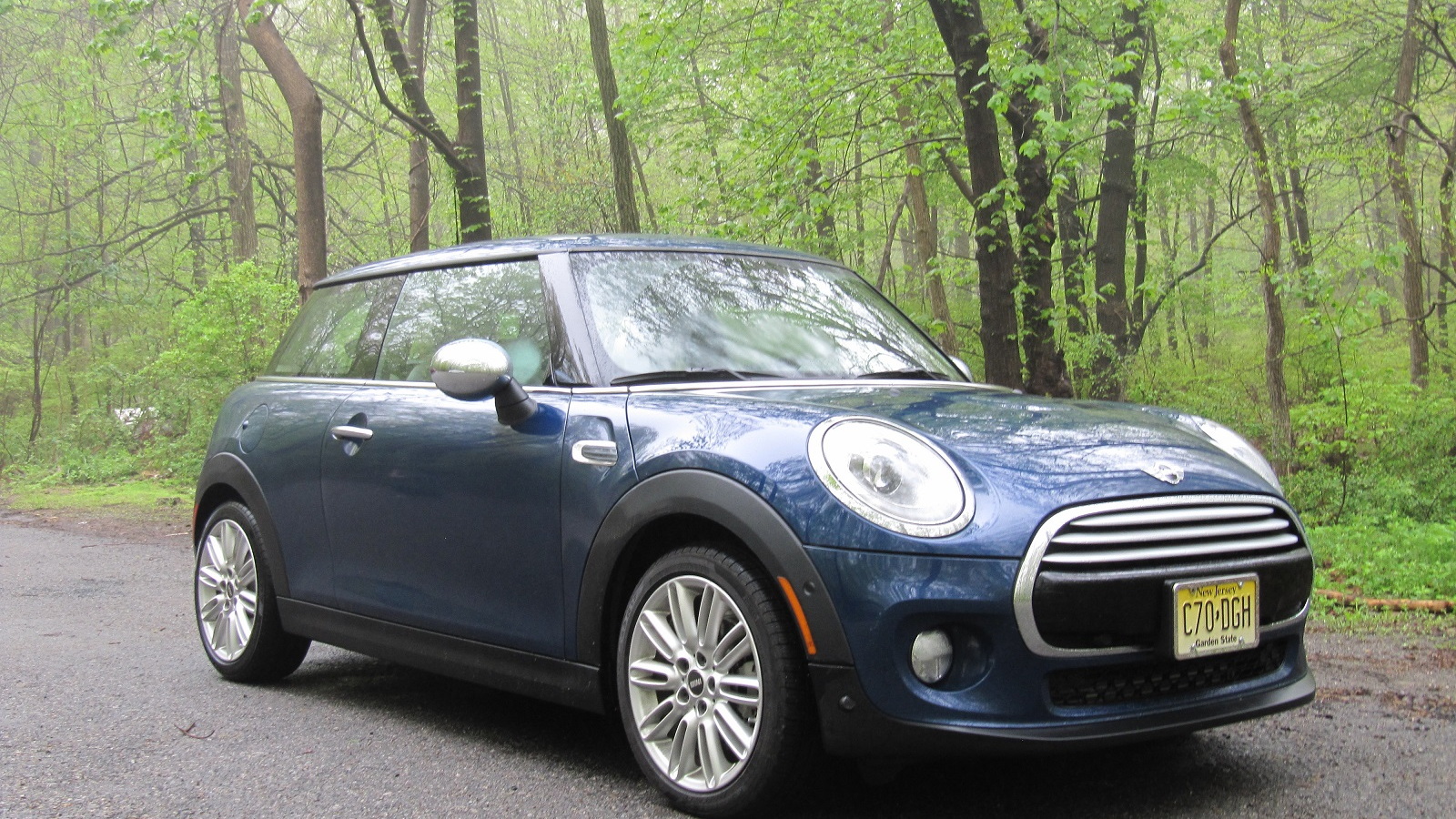 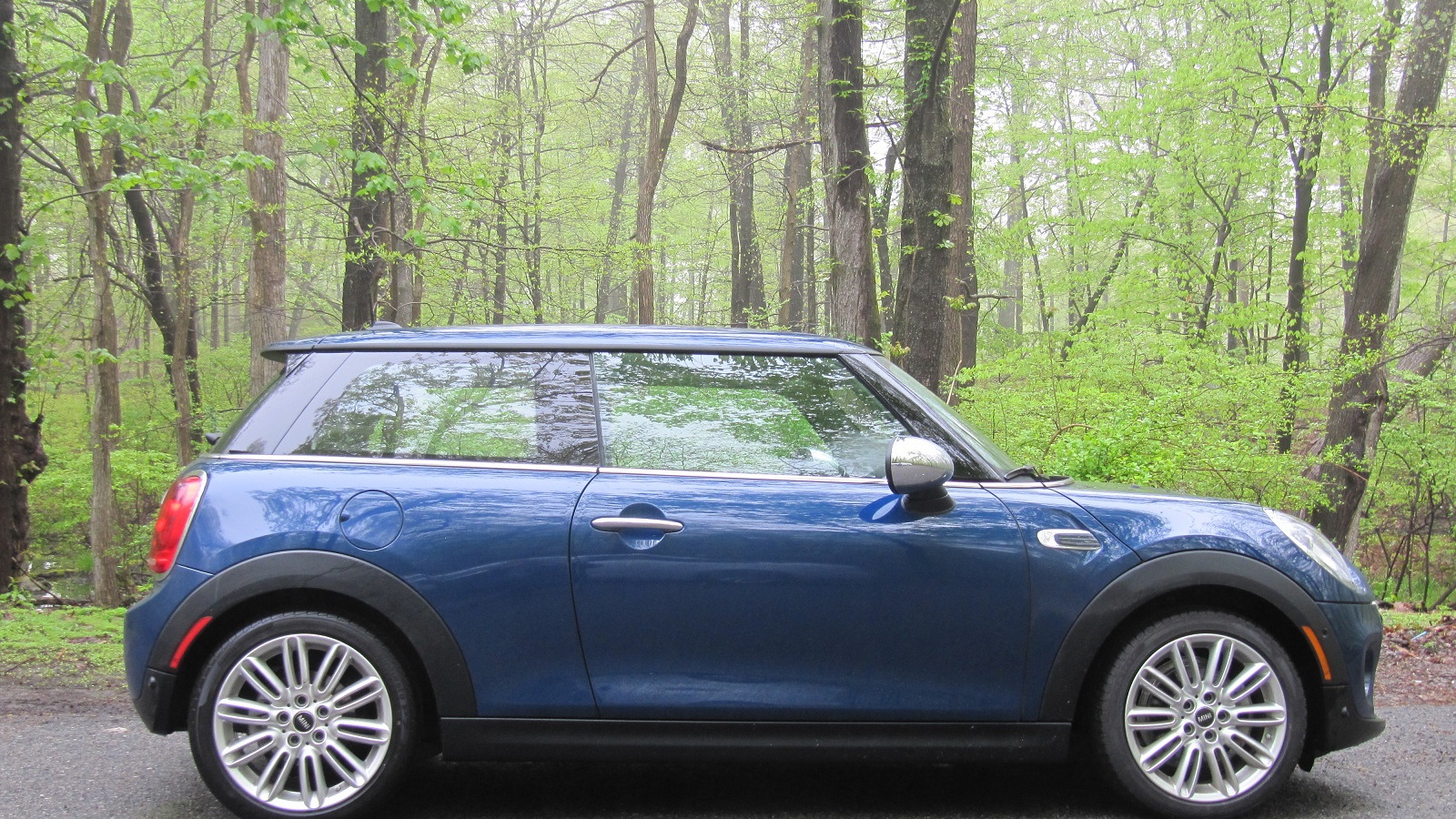 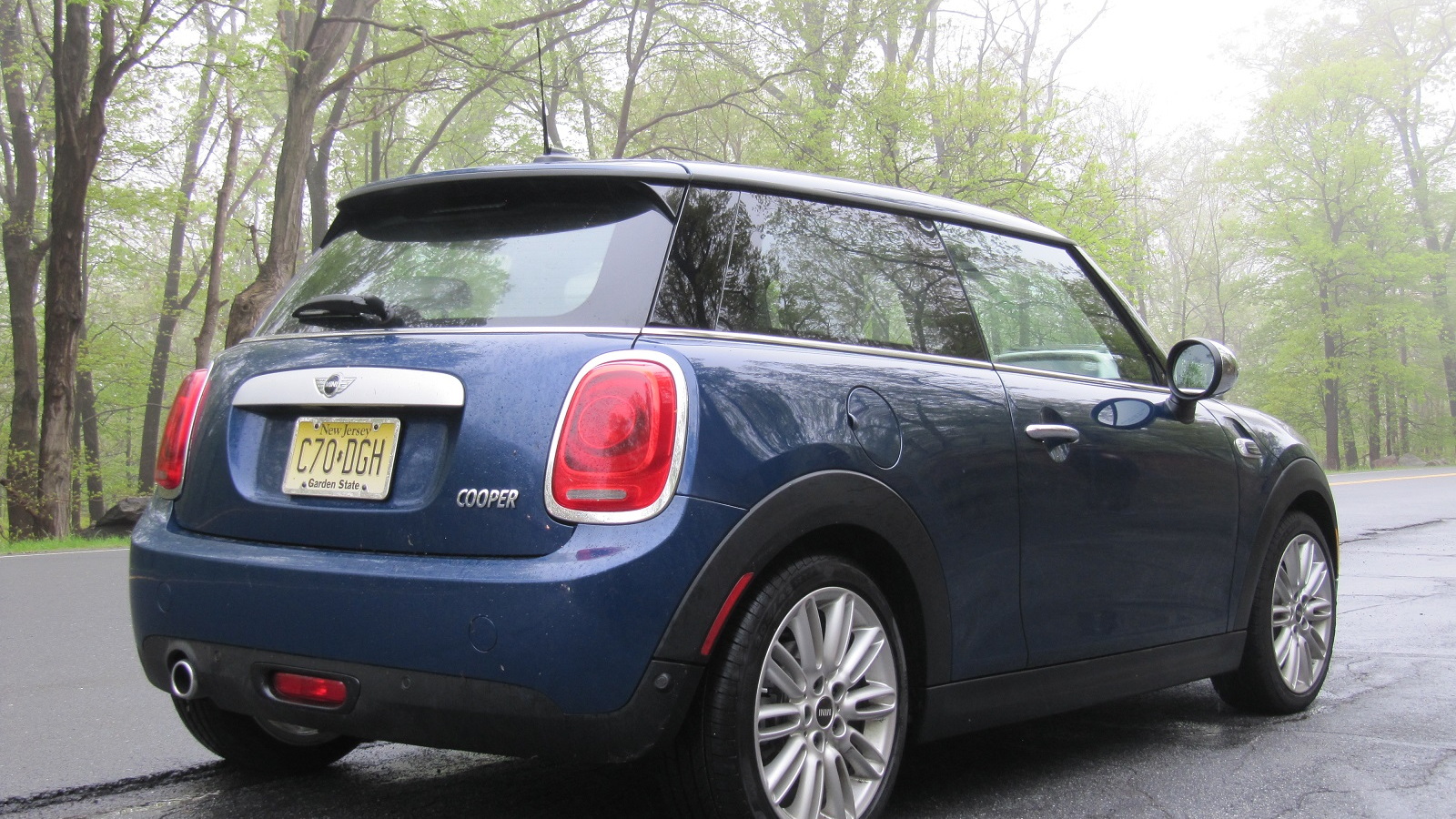 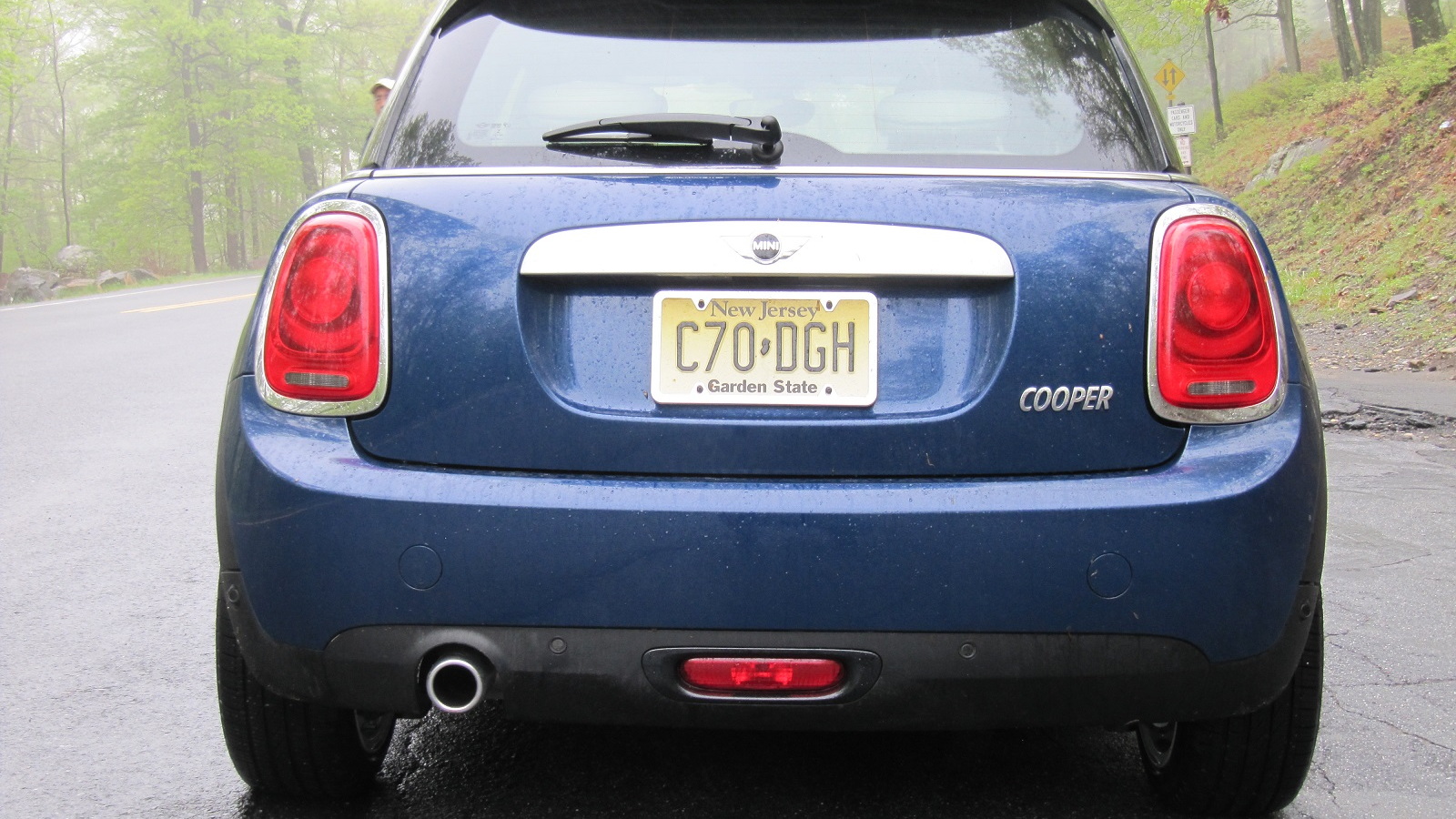 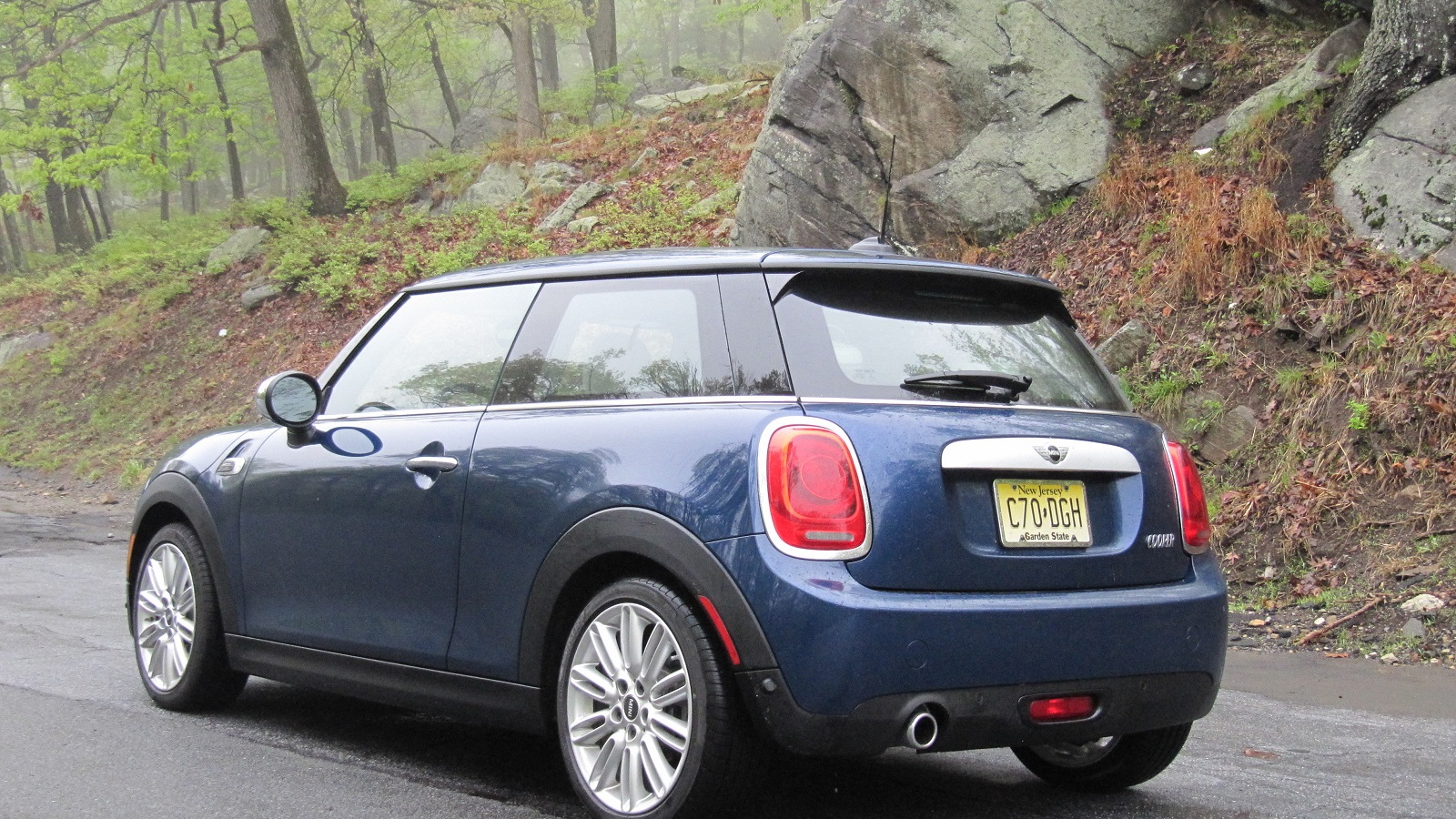 The all-new, third-generation 2014 MINI Cooper three-door hatchback--now called "Hardtop" by MINI--sports a longer nose, a new 1.5-liter three-cylinder engine, and an interior that at last cleans up some of the disastrous ergonomics of the previous cars.

Specifically, the round display in the center of the dashboard is now solely a display screen, with proper instruments at last in a conventional cluster behind the steering wheel.

That round display in the center of the dash harkened back to the single central speedometer on the original Morris Mini-Minor of 1959--a nod to heritage that had long since passed.

We were looking forward to driving this latest MINI Cooper, but were startled to learn that the test car available last month at a drive day at the scenic Bear Mountain State Park in New York was one of the very first automatic-transmission models to be imported.

Still, in our brief tour of the hilly roads in and around the park, the new MINI Cooper proved to be a notable improvement on the last generation.

Visually, the long nose is glaringly obvious from some angles, only slightly obtrusive from others. It's a shame, but it's also a requirement of modern crash-safety requirements, including European rules about pedestrian safety if the car hits a person in the street whose head then hits the hood.

Otherwise, the 2014 MINI is instantly recognizable, complete with white roof.

The new engine is a 134-horsepower 1.5-liter three-cylinder engine with a twin-scroll turbo, driving the front wheels in our car through a six-speed Aisin automatic transmission with paddle shifters behind the wheel.

We would have preferred the standard Getrag six-speed manual gearbox, and we hope to drive such a car later this year.

The MINI offers three drive modes, as do most BMW products these days: the default Mid mode, a Green mode that dials down power and shift points for better fuel efficiency, and a Sport mode that dials them up in the other direction for fastest driving response.

We're glad the MINI rep pointed out how to change them, though: It's via a rotating ring around the base of the shift lever. It's a neat touch, but definitely non-obvious.

The MINI remains a large minicar or small subcompact, and it has the most upright windshield we've seen on any 2014 model short of a Jeep Wrangler.

That gives it character, but it does reinforce the smallness of the cabin. There's enough room in front for two U.S.-sized adults, but the MINI remains a narrow car--although all the glass is slightly further away than in earlier generations.

Headroom is generous even with the large panoramic moonroof installed--it lightens the cabin, of course--and the seat can be adjusted to reduce the "sitting in a bathtub" feel and get a proper sitting-up driving position.

Still, there's no denying: Inevitably, the third-generation MINI is somewhat less mini than its predecessors.

We found the optional sport seats in our car superb--properly bolstered, adjustable on all the right axes, and probably well worth the $1,500 cost of the Sport Package into which they're bundled.

The rear seats are considerably larger in the new body, however. Adults may not want to spend day-long road trips back there, but they're at least usable.

We liked the slightly rough, growly, irregular idle note of the three; it was distinctive and somehow added to the sporty-car image. Under power, it smoothed out but roared pleasantly.

BMW's start-stop systems have improved lately--or so it seems to us--and the one on the MINI fired quickly as we started to lift off the brake pedal. It can also be switched off altogether using a bright-red toggle in the center row of dash switches.

On the road, the new-generation MINI Cooper retains the instantaneous response and "roller-skate handling" of its predecessors. Thankfully, that's been engineered into a considerably more civilized car, with modern amenities and a much quieter interior.

The Sport mode was by far the most rewarding (and least fuel-efficient) way to drive the MINI Cooper, with the little three-cylinder engine eager to rev and the paddle shifters letting us at least simulate a manual gearbox.

Did we mention we really want to test the manual MINI next?

But while the base price of a 2014 MINI Cooper Hardtop hatchback just slides under the $20K mark before delivery--$19,950 to be precise--our lavishly-optioned test car came with an eye-opening $33,095 bottom line on the window sticker.

No fewer than 16 separate extra-cost options were listed, with six of them individually above the $1,000 mark. The Premium Package (a huge two-part panoramic moonroof, automatic climate control, and Harman/Kardon premium sound system) cost $1,750, as did the Satellite Grey leather upholstery--and the MINI Wired Pack as well.

A $1,500 Sport Package included sport seats (very good ones, we should add), along with white turn signals and LED headlights. The 17-inch silver "Tentacle Spoke" wheels added $500 on top of the package cost.

The automatic transmission cost $1,250 (not out of line for this class of car), and the Park Assistant Package added $1,000. Moving below the four-figure mark, a Cold Weather Package (heated front seats and power folding mirrors) was $600, the Deep Blue metallic paint added $500.

Small it remains, but cheap the MINI Cooper is not.