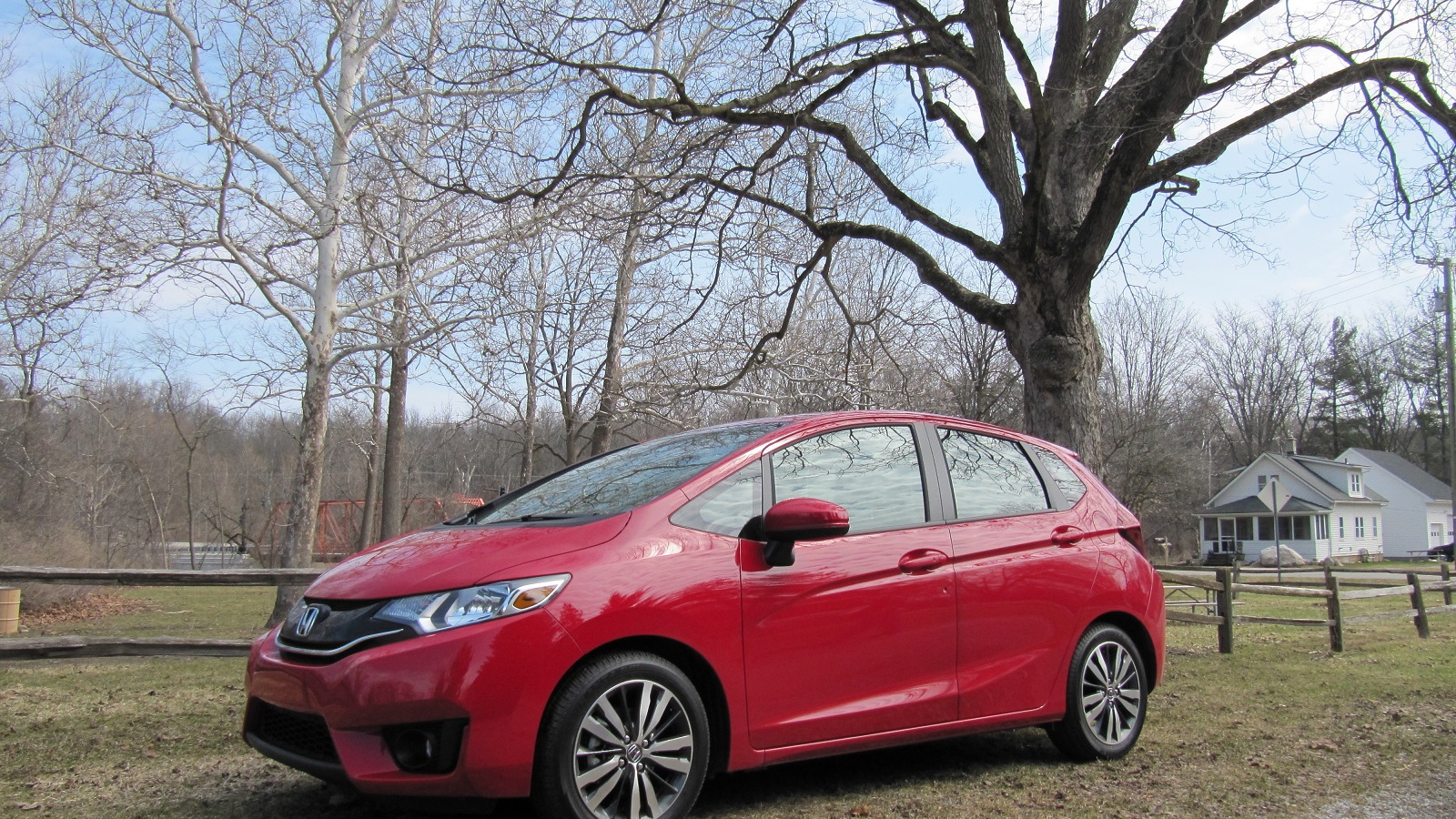 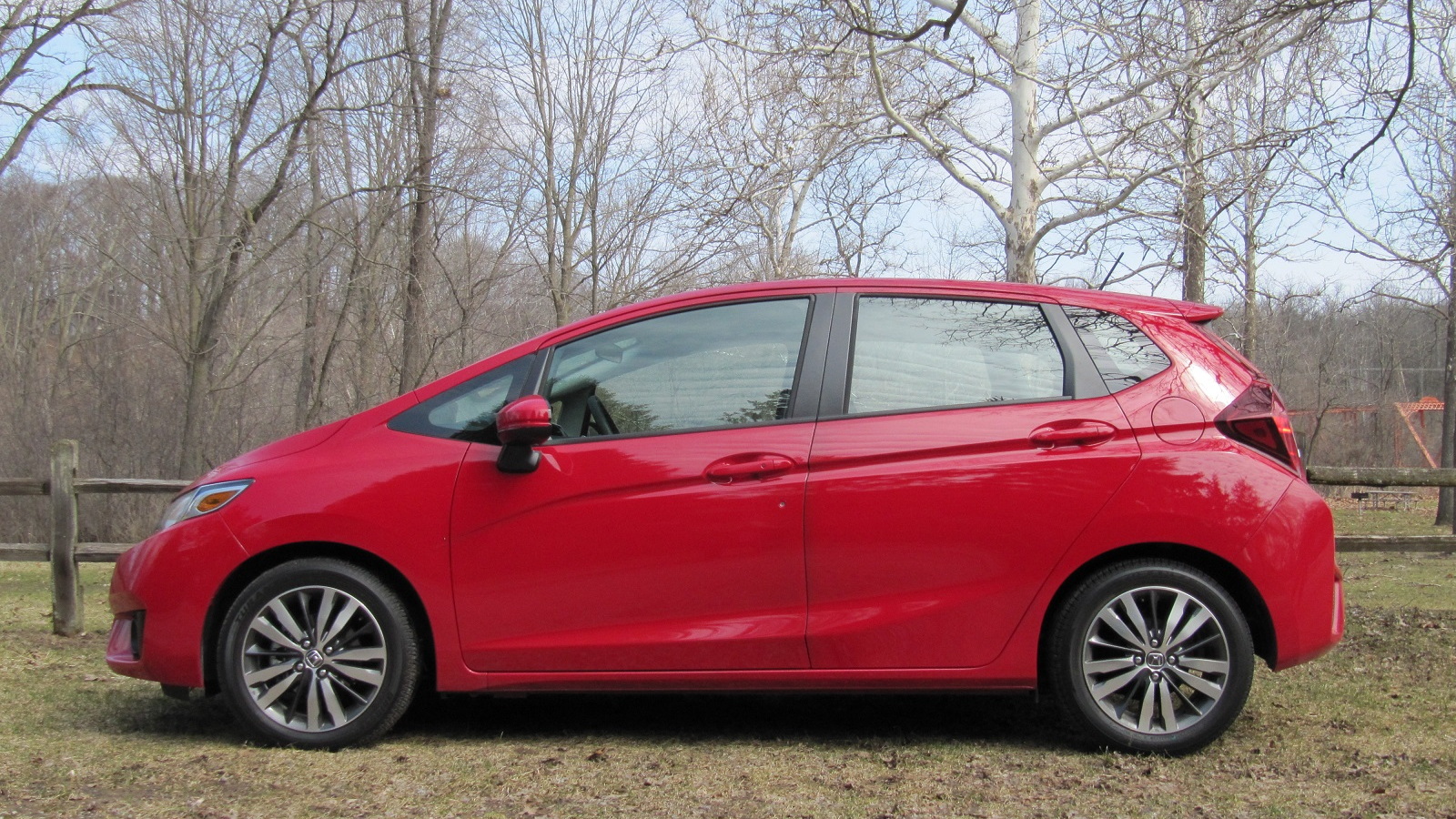 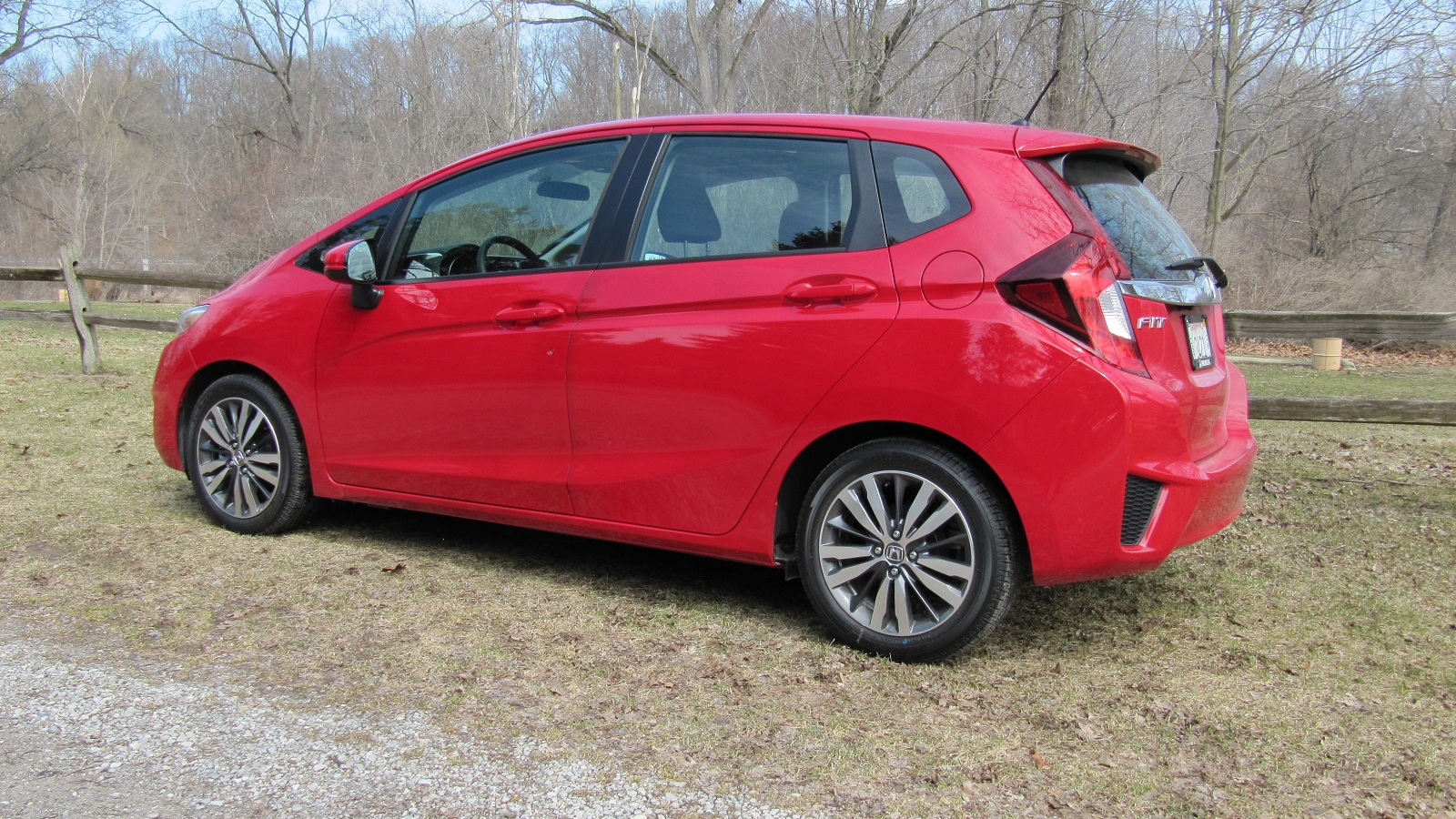 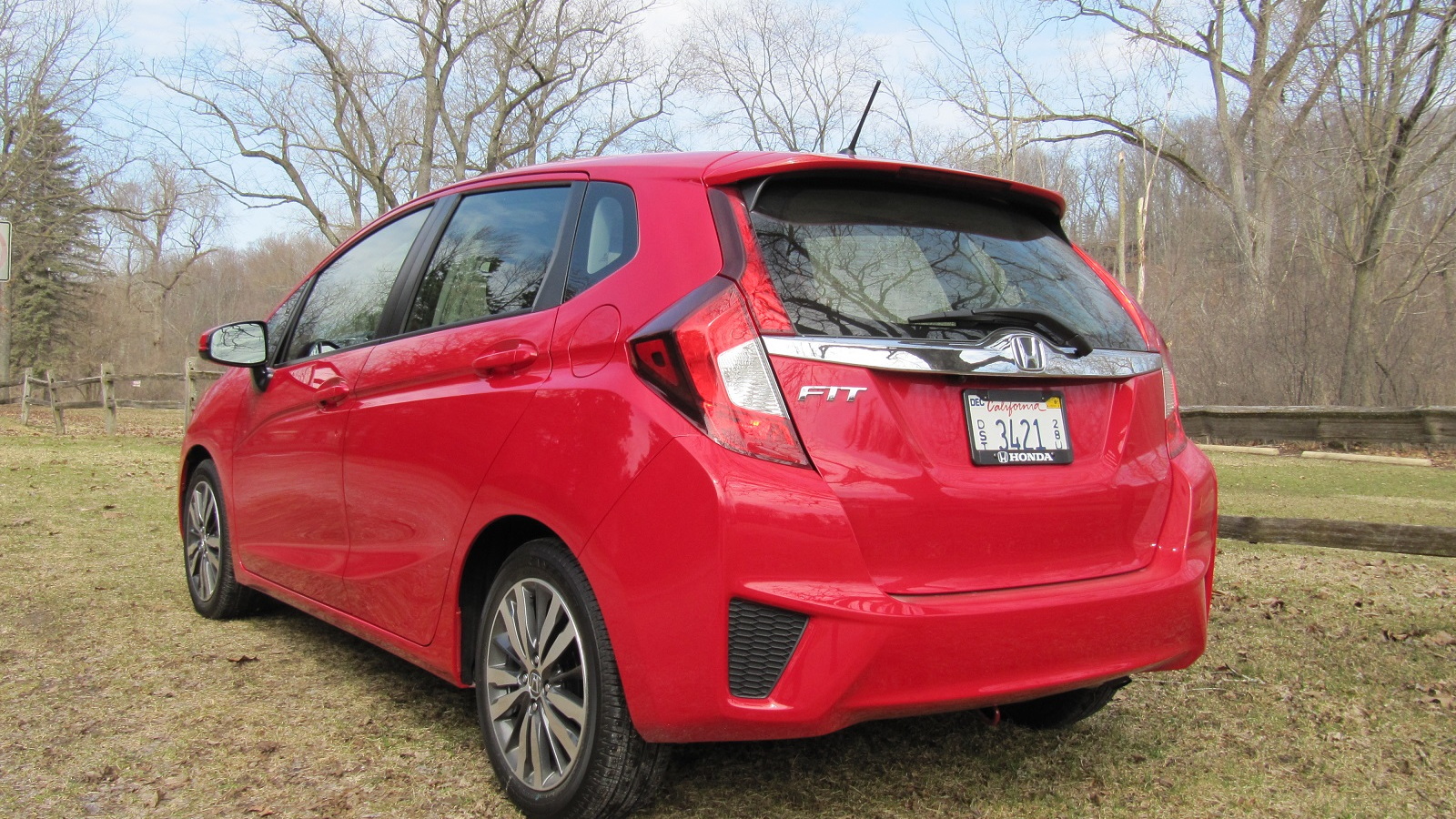 If you're looking for a small hatchback that delivers high gas mileage and almost unparalleled flexibility, the all-new 2015 Honda Fit should probably be at the top of your list.

The new Fit has become a more important car for Honda now that it's built in Mexico, and that's reflected in many of the changes Honda has made to the third generation of its subcompact hatchback. 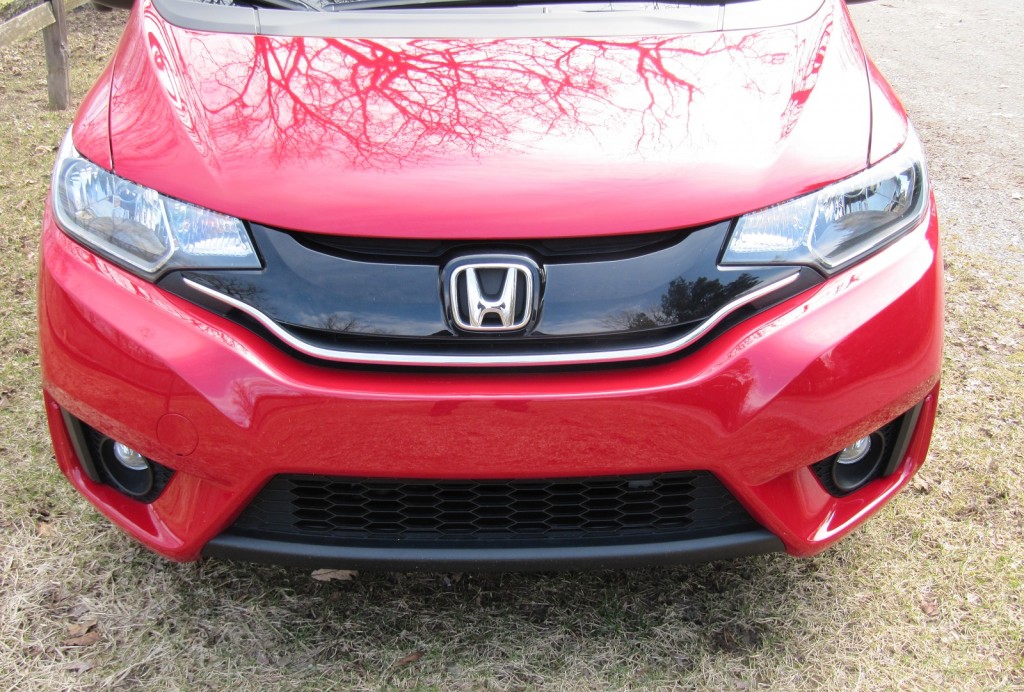 Not only does an all-new powertrain deliver much higher EPA-rated gas mileage, but trim levels have been aligned to those in other Honda models and the company proudly touts $1,000 to $1,800 worth of new standard equipment even as prices have risen only $100 to $225. 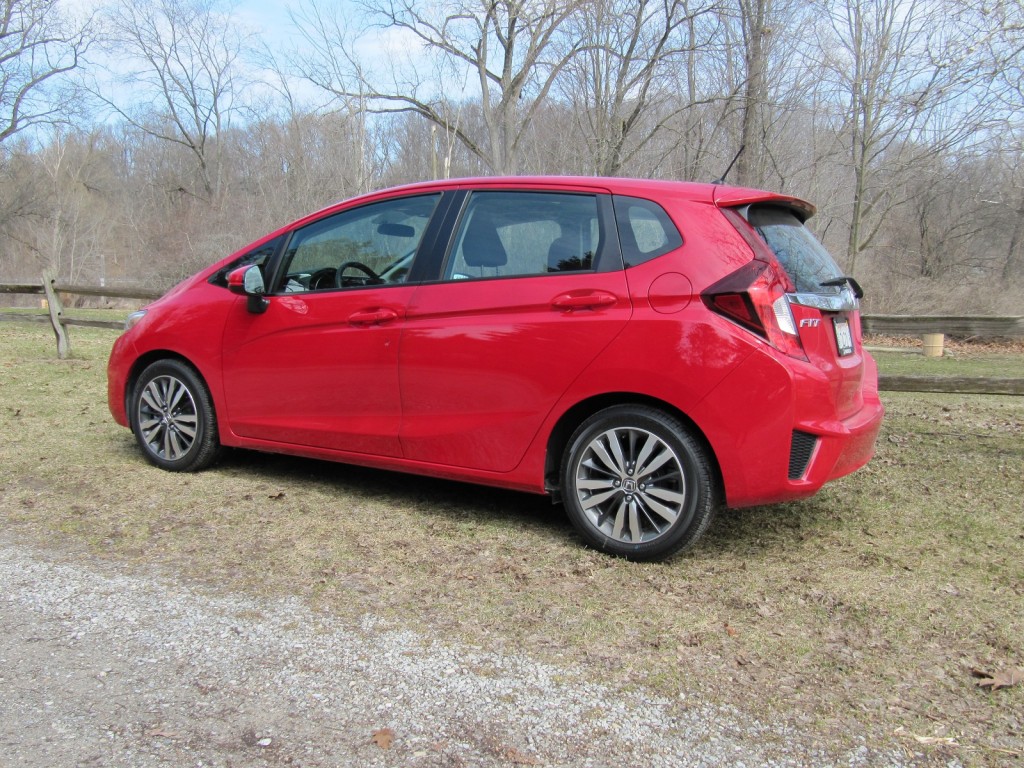 The new 2015 Fit hatchback isn't perfect, but it remains among the best subcompacts on the market--and we suspect it'll do quite well against the Chevrolet Sonic, Ford Fiesta, Hyundai Accent, Kia Rio, Nissan Versa, and Toyota Yaris.

For what is essentially a tall, stubby, one-box vehicle with a windshield and hood raked at almost the same angle, Honda has done a very good job at minimizing the new Fit's slab-sided shape.

A deep crease moving rearward from the front door breaks up the height and leads into stylish taillights with LED lamps, and overall, we found the Fit's exterior design to be attractive and distinctive.

Dimensionally, the new Fit has a wheelbase that's 1.2 inches longer even though its overall length has shrunk by 1.6 inches. A reorganized cabin offers almost 5 inches more rear legroom, and about 5 cubic feet more volume overall. 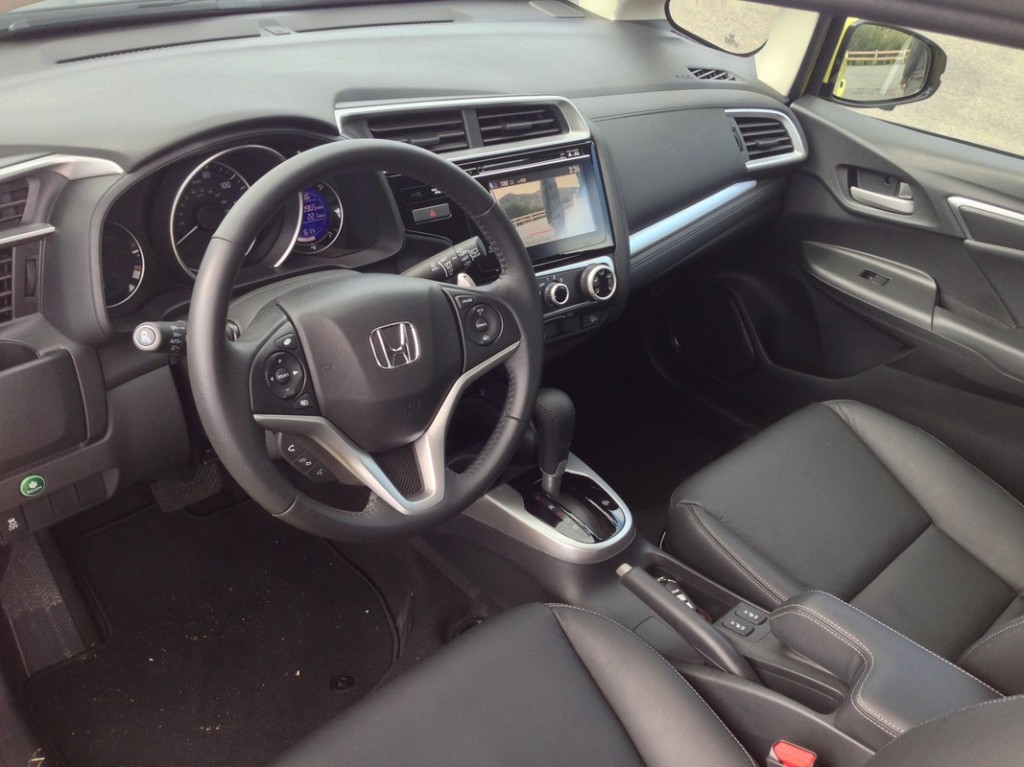 The result is a rear seat with oodles of legroom, approaching that of the large Nissan Versa Note. We noted that the front passenger seat should have had 1 to 2 inches more rearward travel, though, with a rider's left knee just an inch and a half from the dash even with that seat pushed back as far as it would go.

Interior styling is a little busy, though recognizably Honda in style. Reflecting its attention to cost, the surfaces are mostly hard plastic, though good-looking nonetheless, and the "black" color (offset by matte silver accents) is actually a dark charcoal grey, which cuts the grimness factor.

The new Fit is admirably quiet until you floor the accelerator. In fact, it's so quiet at idle that we had to ask whether it was fitted with a start-stop system that had switched off the engine (it's not).

The powertrain of the test car we drove for 80 miles yesterday is a 130-horsepower direct-injected 1.5-liter four-cylinder engine paired with an all-new continuously variable transmission (CVT) that replaces the five-speed automatic used in the previous 2013 Fit (there was no 2014 model year).

There's also a six-speed manual gearbox in the base model, replacing the previous five-speed manual, but we weren't able to get our hands on one of those to test it out.

The CVT offers a Sport mode in which it behaves like a seven-speed manual gearbox: The driver has to shift using the paddles behind the steering wheel, with the transmission only shifting itself to protect against over-revving or lugging. Frankly, we doubt many Fit drivers will use that mode--and certainly fuel economy is better in the Normal mode.

Which brings us to the EPA ratings for the 2015 Fit, which are higher than any other subcompact in its competitive set. (We doubt very much it'll be cross-shopped against the smaller, slower, noisier Mitsubishi Mirage, which is rated at 40 mpg combined with its own CVT.) 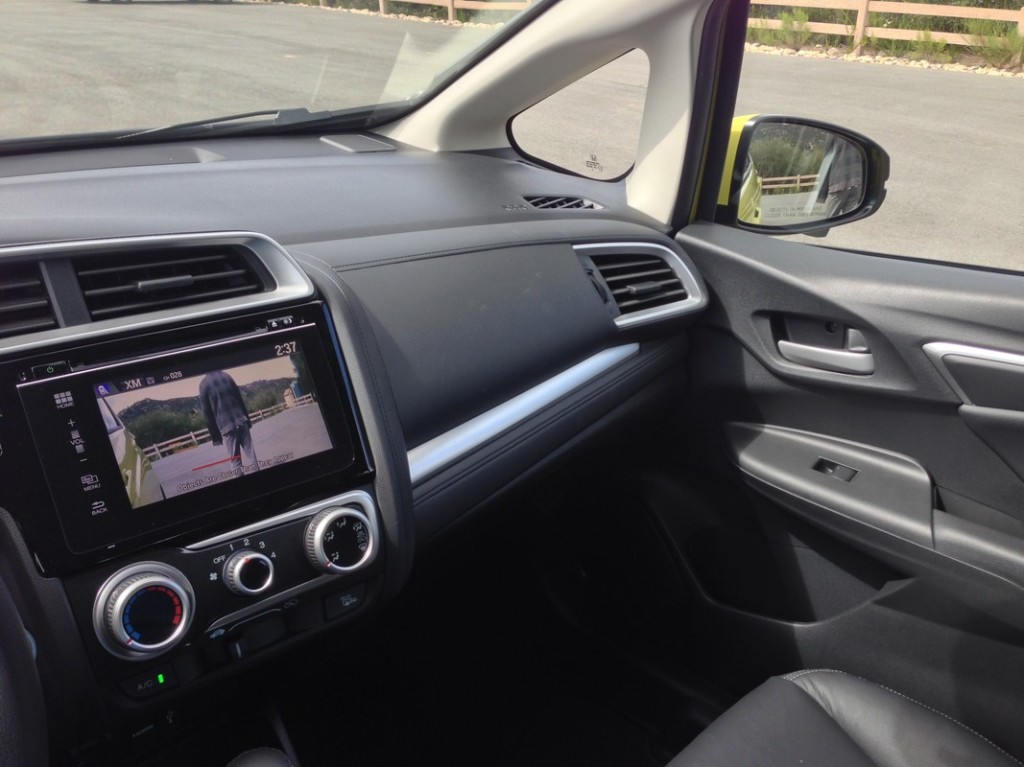 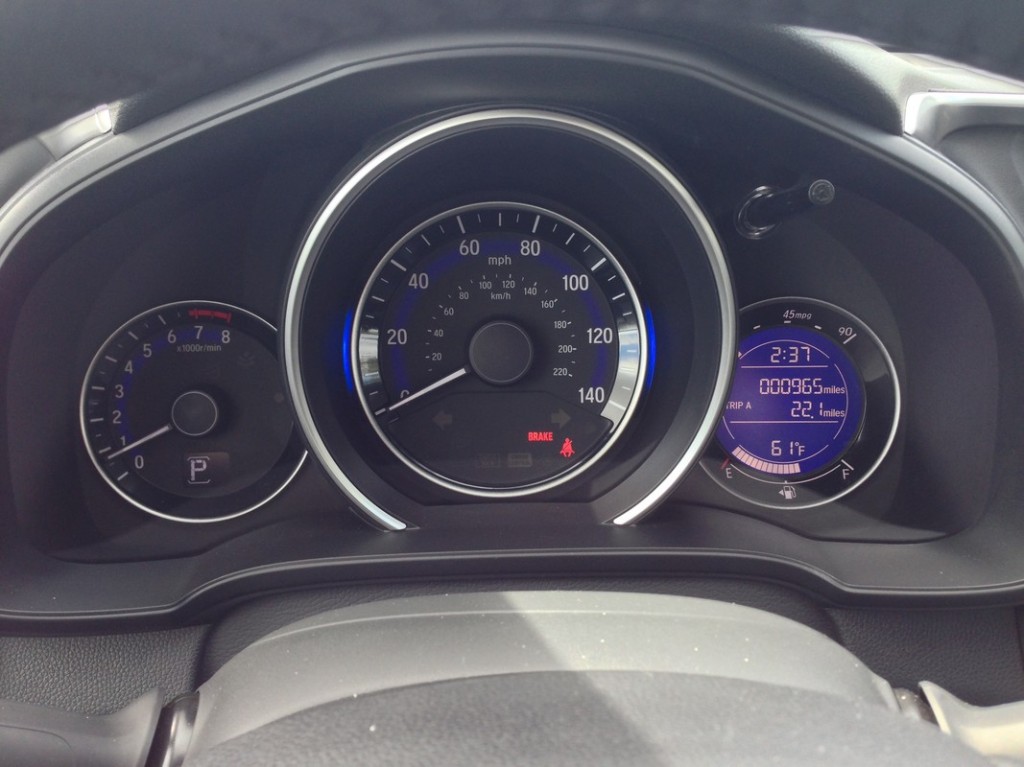 On two legs of our test drive through the largely flat country around Ann Arbor, Michigan, we registered 38.7 mpg and 44.7 mpg on the car's dash display for 35- and 45-mile trips. And, importantly, both trips included at least some high-speed highway miles as well as 30- to 50-mph country roads and urban stop-and-go.

On a 75-mile drive earlier in the month, The Car Connection registered an indicated 37 mpg in what it called "spirited" test driving.

So we're inclined to think the 2015 Fit may be capable of delivering 35 to 38 mpg in real-world use--and we look forward to a longer, more comprehensive road test sometime in the next several weeks.

With the Fit now targeting the center of the subcompact market, it's lost a bit of the sporty edge that both previous generations offered. It's far from objectionable, but it's less crisp, more muted, more mainstream.

We would like to see a sportier Fit model, and it wouldn't take much. There's no need for a romping, stomping Fit Type R; instead, perhaps 10 or 15 more horsepower, slightly tighter suspension settings with a bit less roll, and a sportier set of wheels and tires should do it. How 'bout it, Honda? 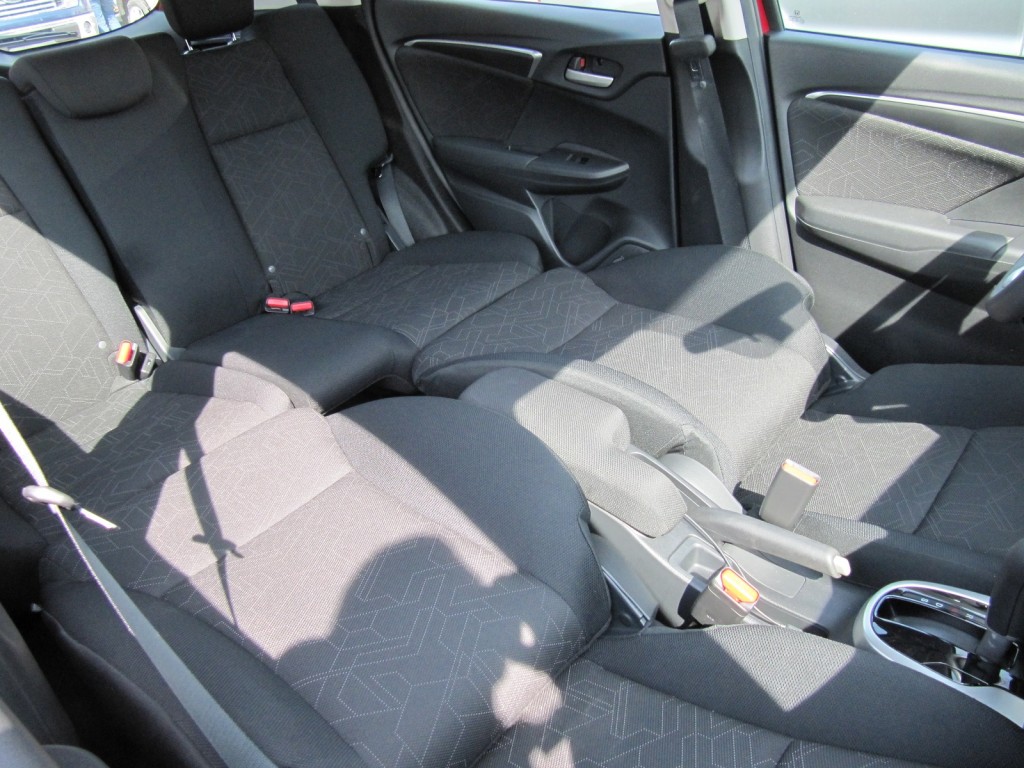 Key to its appeal, the 2015 Fit has retained the "Magic Seat" that gives it more interior flexibility than any other subcompact on the market. Along with the normal configuration, you can arrange the front and rear seats in four different positions: Utility, Tall, Long, and Refresh.

Utility simply folds both rear seats down to create a deep and almost-flat load floor.

Tall, on the other hand, lifts one or both rear-seat bottom cushions up against the back rest, giving you remarkable vertical height for things like plants--though we weren't able to find a potted plant to test whether we could move one taller than the car by sticking it out the sunroof.

Long lets you fold down not only the rear seat but also the front passenger seat, giving a load space sufficient for a 9-foot longboard--not bad in a car that's less than 13 and a half feet in length.

And finally, the Comfort configuration is achieved by moving the front seats forward, removing their headrests, and dropping the backs until they're flat and flush against the rear seat cushions--giving you an enclosed automotive equivalent of a two-person Barcalounger. The rear seatback can even be reclined for lounging, perfect for watching drive-in movies through the expansive windshield. 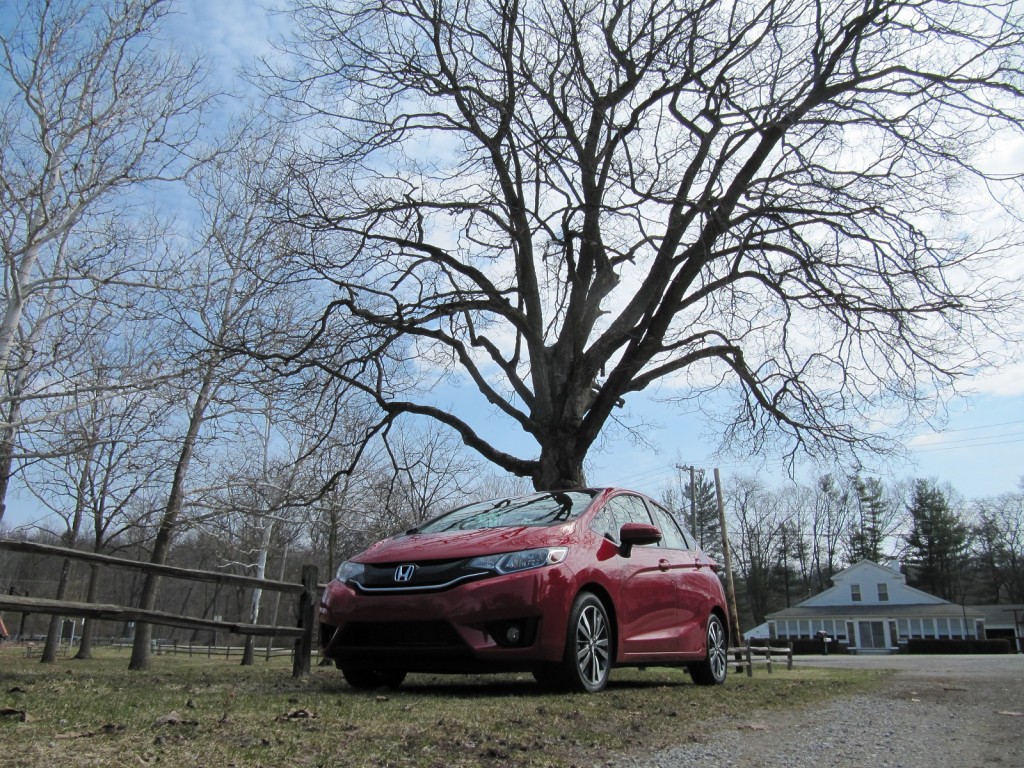 Honda has aligned the new Fit's trim levels with the rest of its range, so there's now a base LX, a mid-range EX, the EX-L premium model, and EX-L With Navigation at the top of the lineup.

Even the base Fit LX comes with air conditioning, cruise control, keyless entry, and a rearview camera. 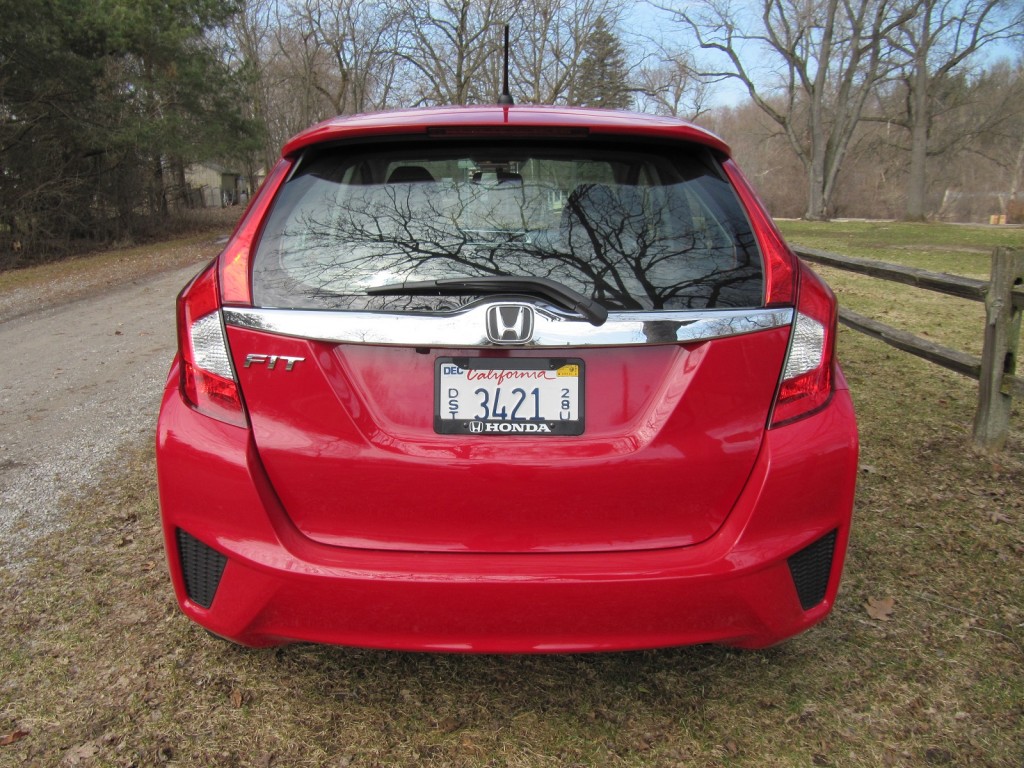 The mid-level EX adds the neat LaneWatch system (pioneered on the mid-size Accord) that shows an image of the right-hand side of the car via a mirror-mounted camera when you turn on the right blinker. It also has an upgraded infotainment and audio system, and pushbutton start.

Leather and other luxury features distinguish the EX-L, and the Navi system at the very top of the line is arguably worth the money, featuring live traffic and other info on a crisp, high-contrast display--though many buyers will simply use Google Maps on their mobile phones regardless.

The 2015 Honda Fit will be in showrooms this coming Monday, April 14. The 2015 Fit LX with six-speed manual gearbox starts at $16,315 including the mandatory destination fee.

The CVT option costs $800 more, and the very top-of-the-line models can reach as high as the low- to mid-20s.