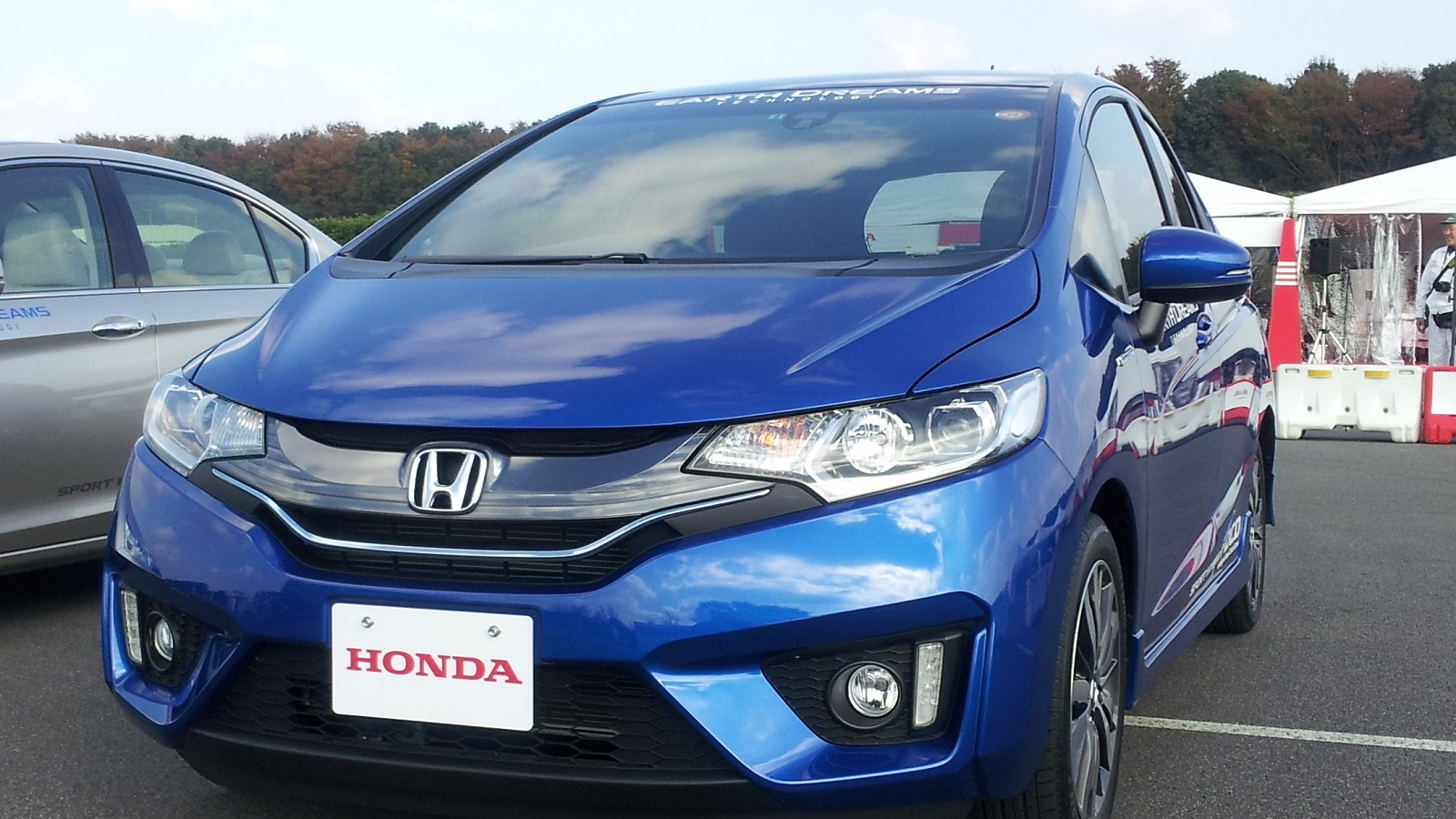 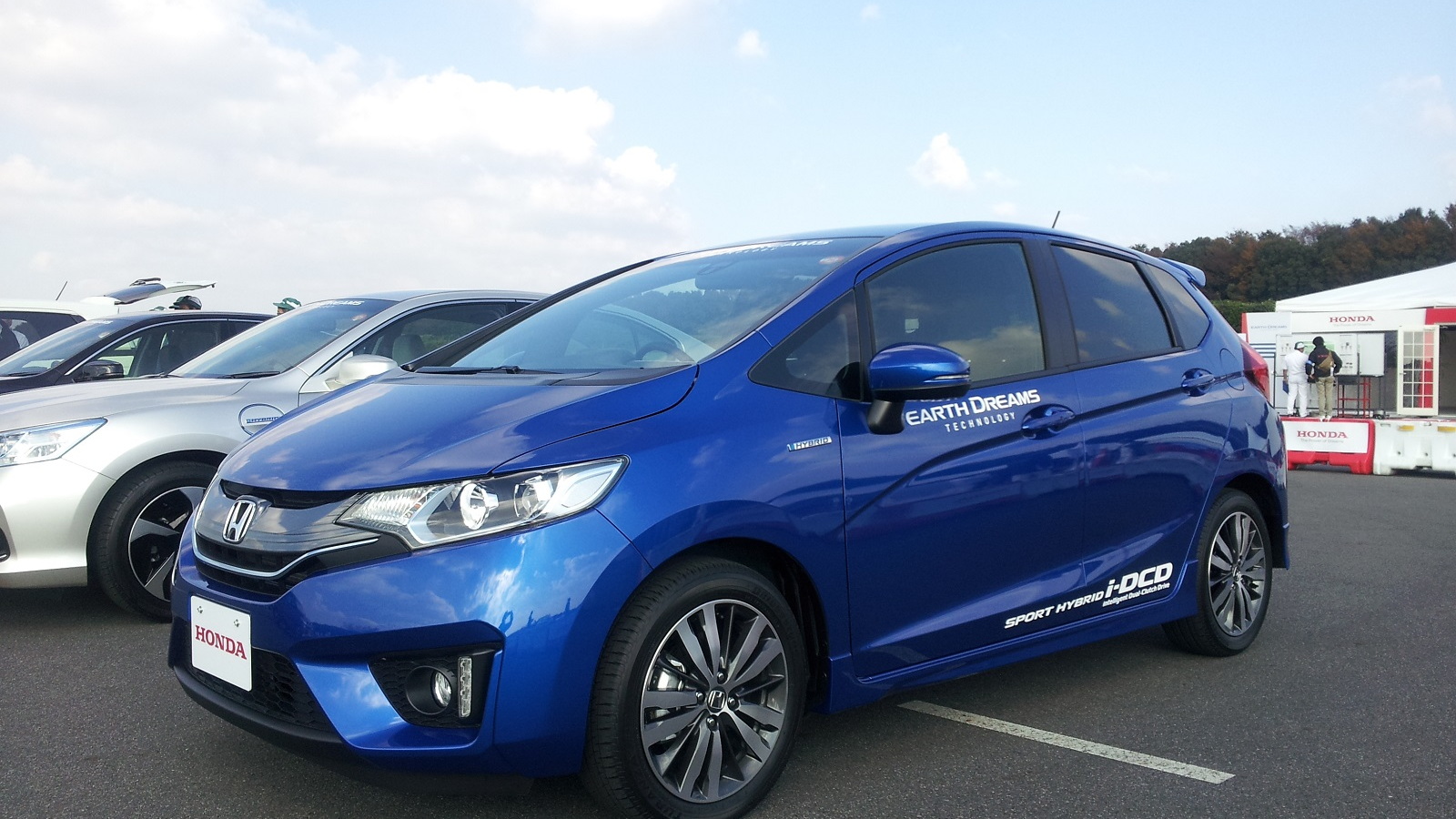 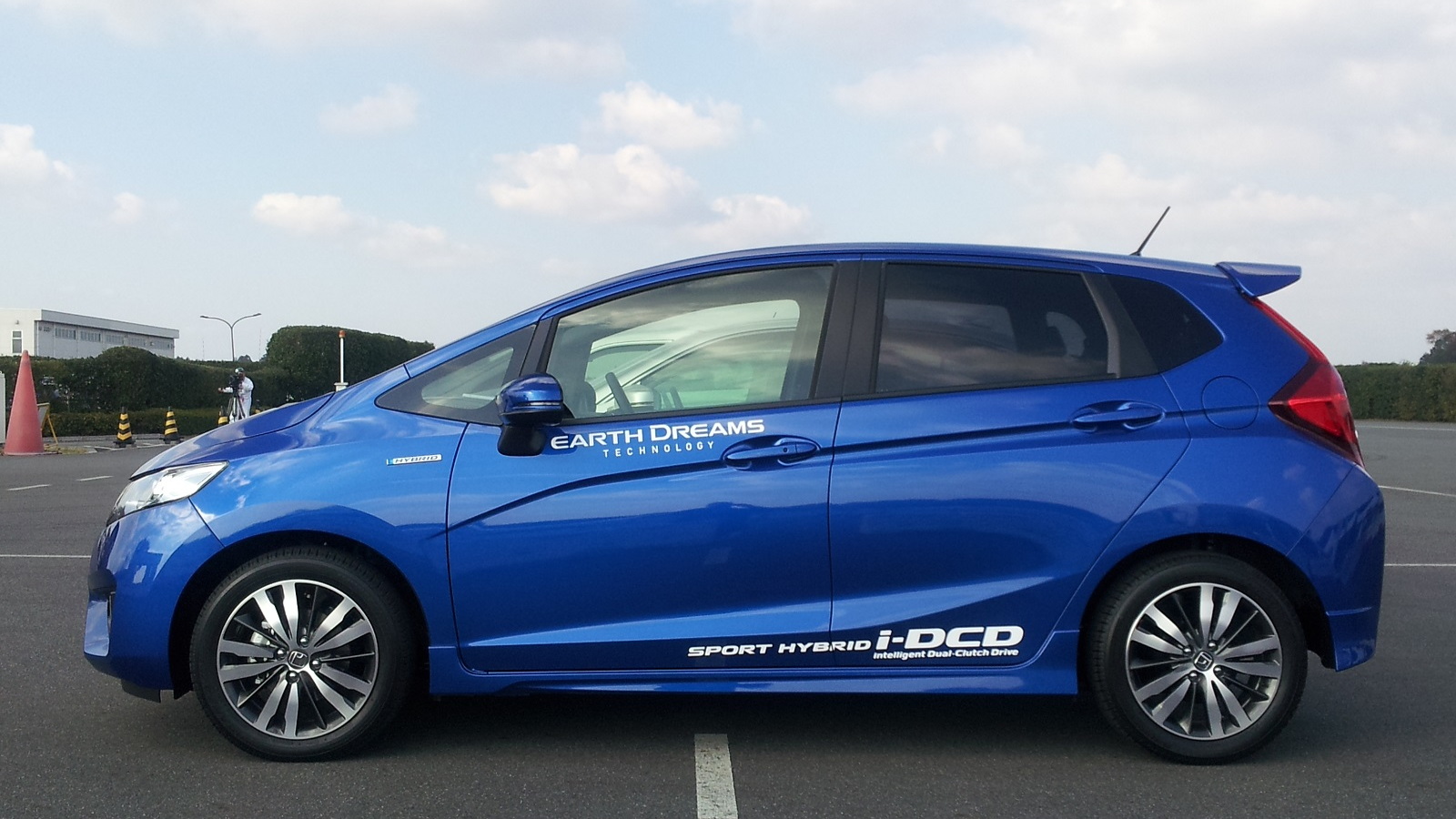 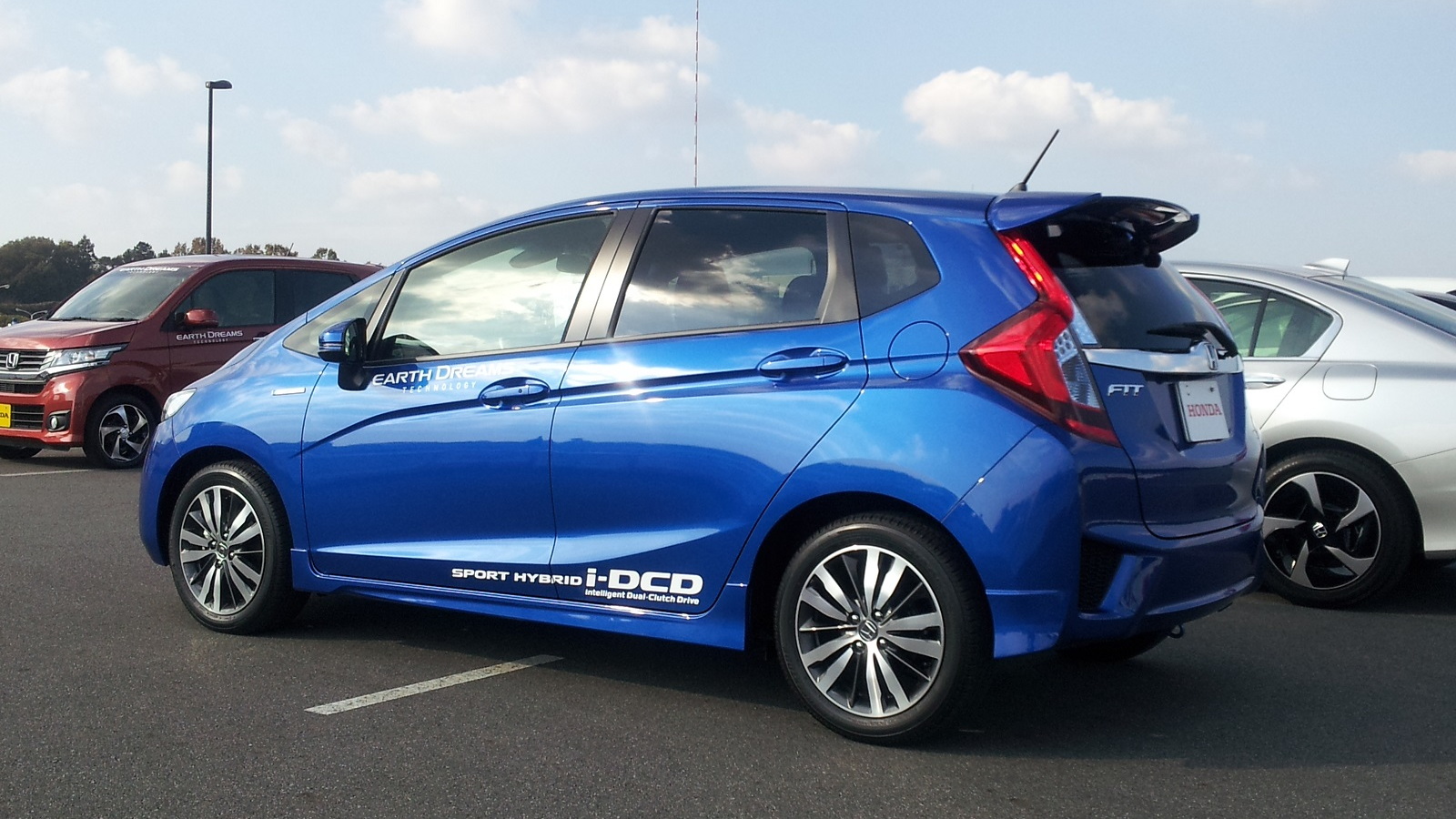 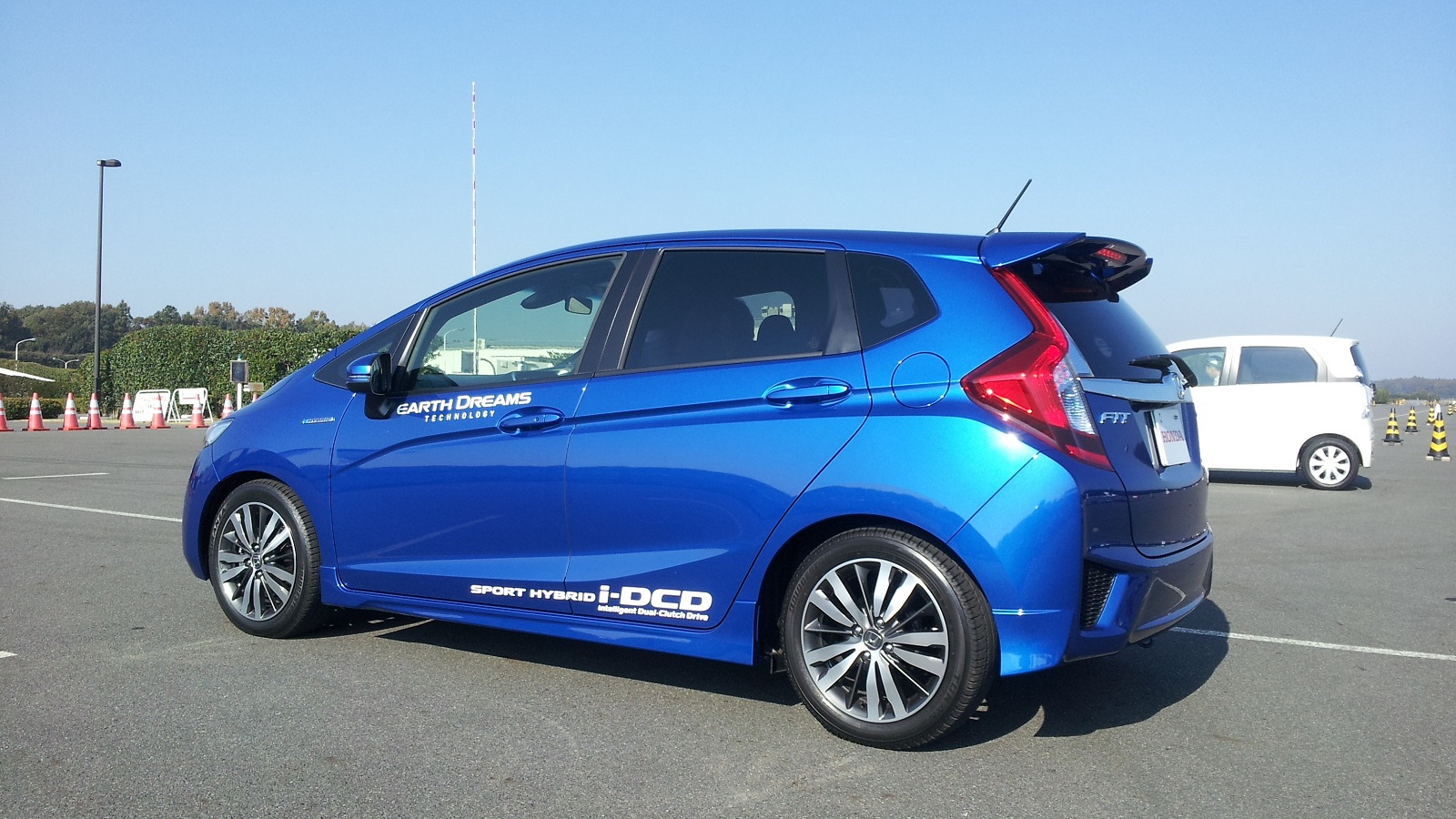 We've always liked the Honda Fit; the current 2013 model remains one of the better, more capacious, and most flexible subcompacts on the market even though it's now the oldest vehicle in its class.

That'll change with next spring's launch of the 2015 Honda Fit, at least one version of which will be rated at 36 mpg combined, the company says.

But 10 days ago, in Japan, we drove a version of the Fit that's already on sale in Japan that will likely be forbidden fruit for North America: the Honda Fit Hybrid.

We only spent a total of about 10 minutes in the Fit Hybrid, which is hardly enough for comprehensive impressions.

But the hybrid Fit has been a huge sales success in Japan, where vehicle-tax rules heavily favor hybrids.

The new Fit Hybrid is the first car to use Honda's new and more powerful i-DCD single-motor hybrid system.

And as we found on our drive of prototype systems last year, the new system is powerful enough to launch the car on electricity and take it to 40 mph or so before the gas engine switches on.

That stands in contrast to the many generations of Honda's previous Integrated Motor Assist (IMA) mild-hybrid system. The IMA system provided additional torque to complement engine output, but it couldn't move the car alone for more than a few seconds at a time--and not at all from a standstill.

The new i-DCD system--it stands for Dual Clutch Drive--uses an electric motor with a peak output of 22 kilowatts (30 horsepower), against the IMA system's 15 kW (20 hp). Honda engineers told us it could provide sustained torque of 96 lb-ft (130 Newton-meters) and roughly 1 second of peak torque at 118 lb-ft (160 Nm).

The motor is, again, sandwiched between the engine and transmission, but now that unit is a  seven-speed dual-clutch transmission (DCT)--hence the "Dual Clutch" in the name i-DCD--rather than the continuously variable transmission (CVT) that Honda previously used in its IMA hybrids.

Recaptured energy is stored in a 0.6-kilowatt-hour lithium-ion battery pack under the load bay just behind the rear seat. Unlike that of the Honda current Insight and CR-Z, however, the new Fit has a full-depth load bay.

The first thing we noticed in the Fit Hybrid was its small shift wand on the console, which is remarkably (and deliberately?) reminiscent of the similar control in a Toyota Prius hybrid. Like the Prius, the "parking" mode is a button marked "P" rather than a position for the lever.

The gasoline Fits, on the other hand, have more conventional chrome shift levers.

On a Honda test course that includes stops and starts, a long, straight acceleration section, some sharp bends, and a coast-down section, the Fit Hybrid spent perhaps 20 percent of its time in electric-only mode.

We drove Japanese-market right-hand-drive production cars, some of which we later saw coming off the production line at Honda's Yorii assembly plant, part of the larger Saitama factory complex.

The new Fit is quieter inside than the old one, and while we heard some whining from the motor on deceleration when it acted as a generator, the engine switched off and on almost imperceptibly. Honda's done a very good job with noise suppression and vibration damping there.

The most noticeable reminder of the car's hybrid nature, in fact, was occasional mild juddering as the motor engaged and disengaged with the DCT just before or after it up- or downshifted.

But it does point out that the DCT has discrete gear steps, rather than the infinite range of the CVT, without a torque converter to buffer the changes as in a conventional automatic.

In fact, for its larger and more luxurious (non-hybrid) cars, Honda will use an eight-speed DCT with a torque converter added on for precisely that reason.

On the smaller, less expensive Fit Hybrid, however, the electric motor is used to buffer the changes--but the drivetrain operation remains perceptible under certain circumstances.

We weren't able to ascertain anything useful about the fuel efficiency of the Honda Fit Hybrid from our short drive.

Honda has said its gas-mileage may be as much as 30 percent higher than that of the previous IMA hybrids, which might bring the Fit Hybrid close to the 50-mpg ratings of three different Toyota Prius models.

But we may never find out what ratings the Fit Hybrid would receive in U.S. test cycles.

Honda executives reiterated that they have no current plans to bring the car to the U.S. market.

Among other reasons, said Yusuke Hasegawa, general manager and senior chief engineer in Honda R&D's technology development group, the cost differential in Japan between the gasoline and hybrid Fits is roughly $3,000.

Japanese incentives on registration and road taxes, along with much more expensive gasoline, make that a reasonable premium for consumers to pay.

But in the U.S., gas prices run only $3 to $4 a gallon, no government incentives remain for consumers to purchase hybrids, and the Fit currently carries a base price of $15,425 before delivery. (With 2015 Fits coming from Mexico, Honda likely hopes to keep this price stable for the new car.)

If a gasoline Fit is rated at 36 mpg, even if the Fit Hybrid could reach 50 mpg, that would be a difference of only 117 gallons of gasoline each year at 15,000 miles a year.

Even at $4 a gallon, the payback would take more than six years--far longer than consumer will pay, Honda feels.

So unless something changes, we're not likely to see the Honda Fit Hybrid we drove in the States any time soon.

Over time, however, you might expect the new i-DCD hybrid system to show up in future Honda Civic Hybrid models--and perhaps the next Insight and CR-Z. IF those models are replaced, that is.

Until then, the neat little Honda Fit Hybrid and its new small hybrid system will remain forbidden fruit.