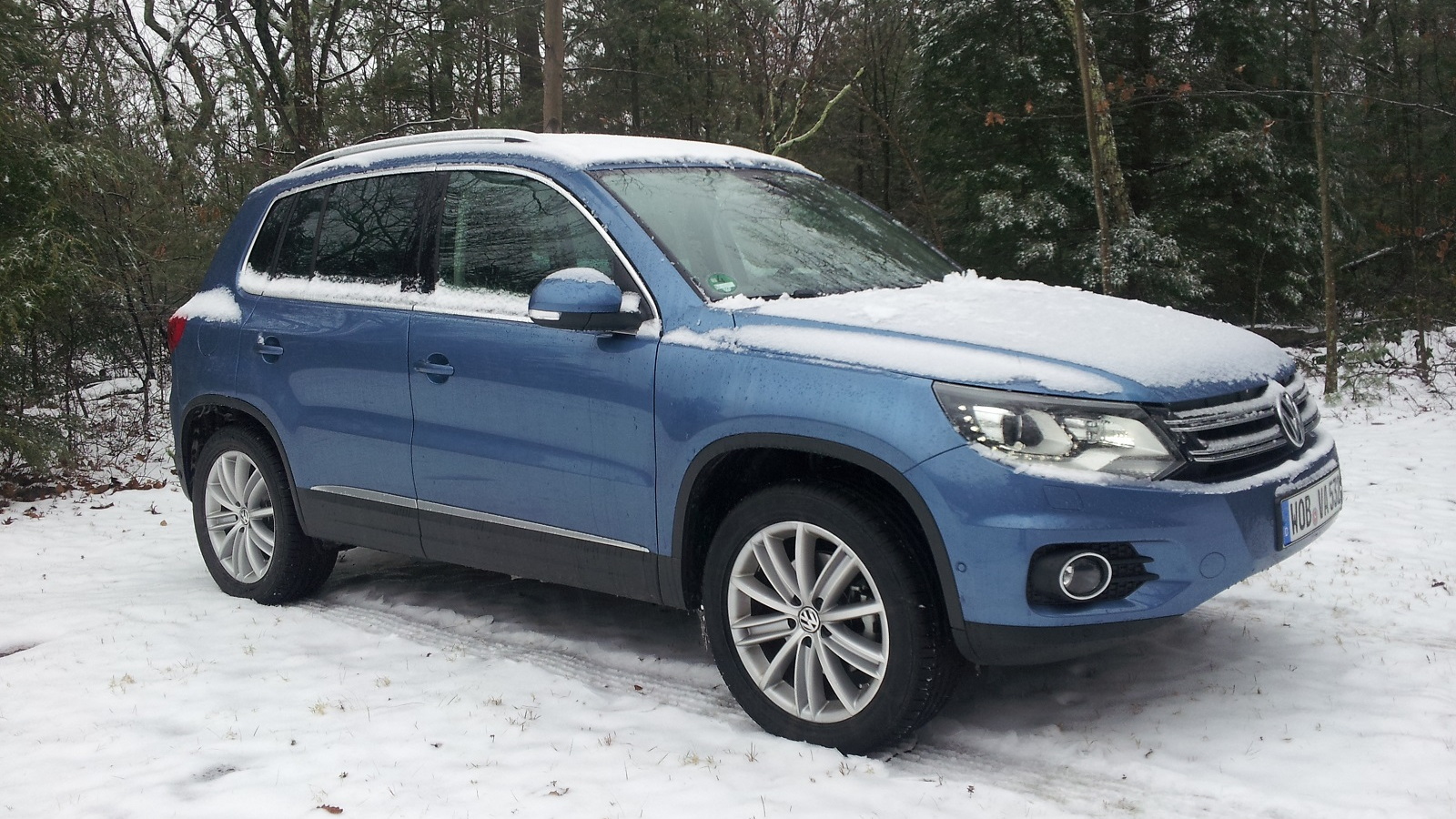 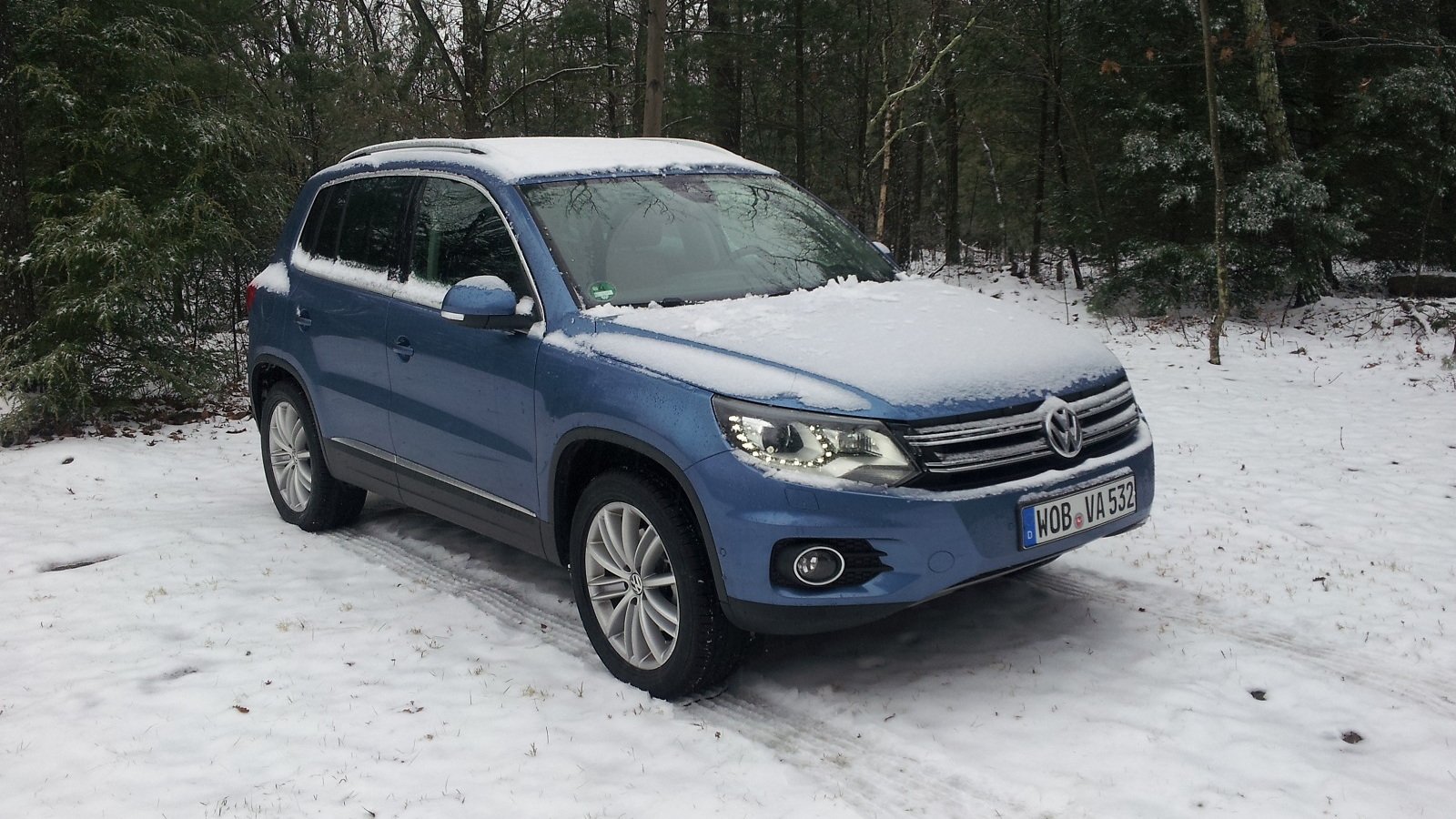 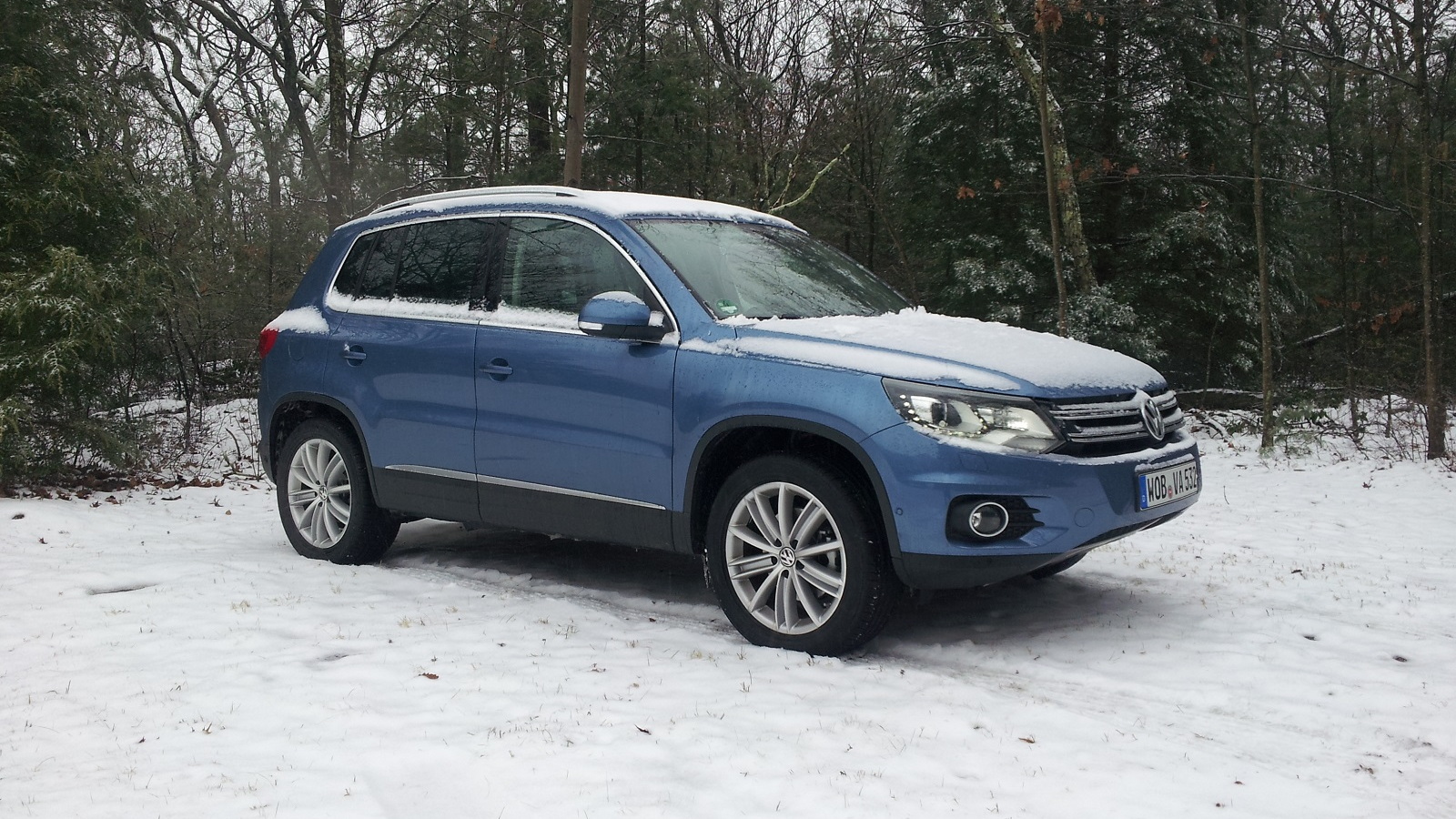 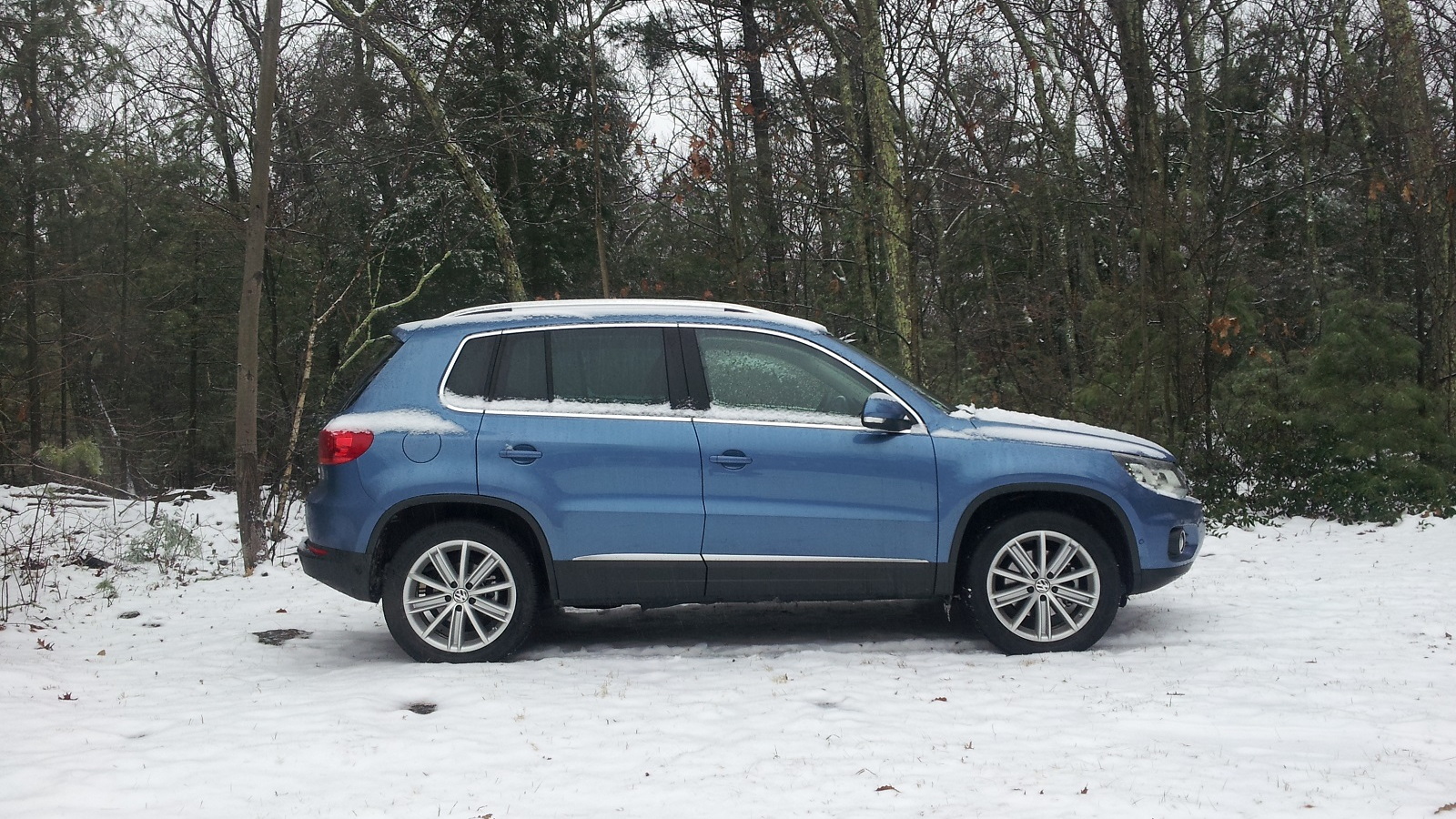 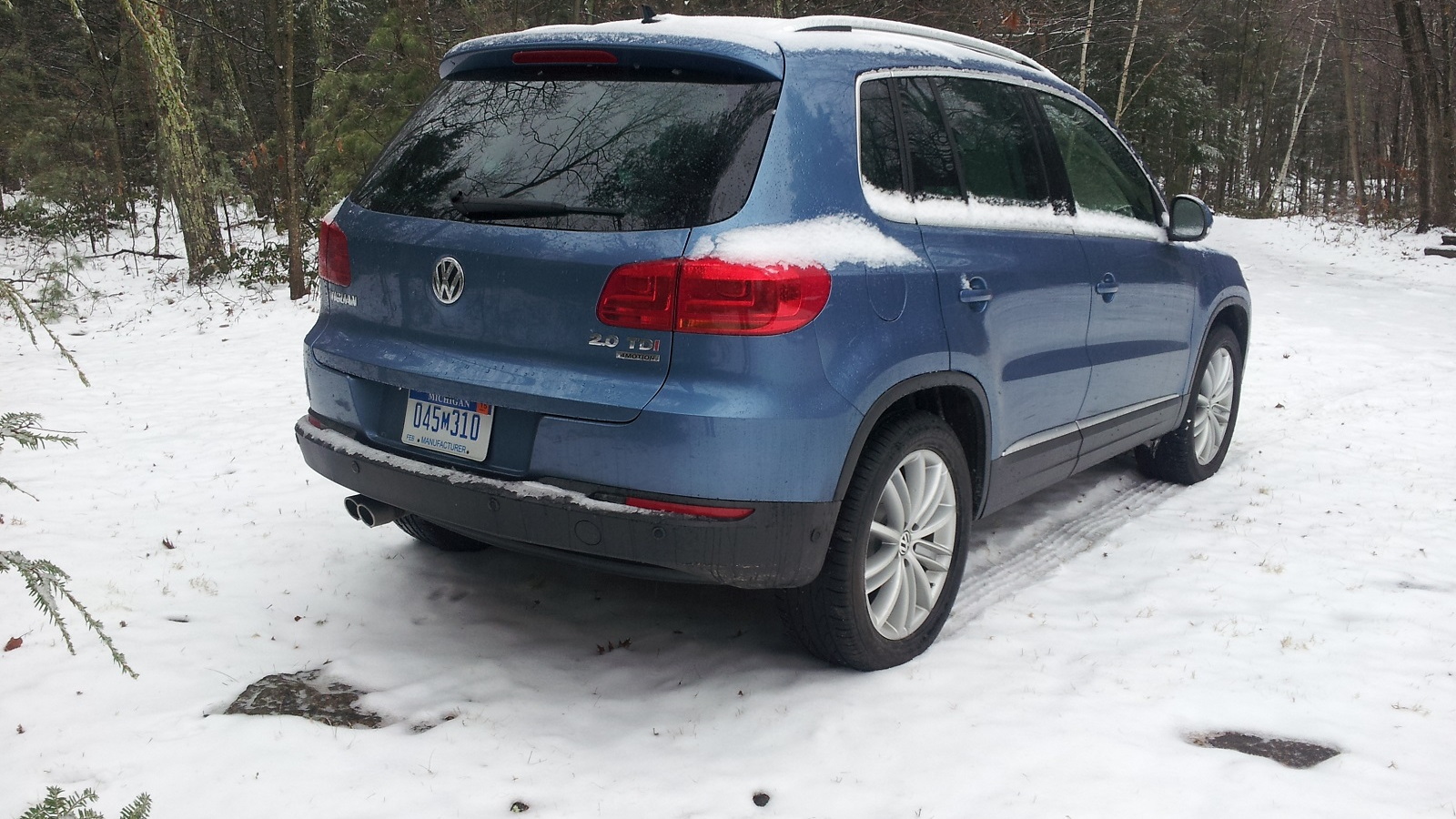 It seems to be the season for diesel compact crossovers.

Now we've added some forbidden fruit to that list: the European-market diesel version of the Volkswagen Tiguan, sold in North America only with a direct-injected and turbocharged 200-horsepower 2.0-liter gasoline engine.

The European Tiguan TDI is powered by a 174-hp 2.0-liter turbodiesel four-cylinder engine that produces 280 lb-ft of torque.

The diesel Tiguan also included a standard start-stop feature, switching itself off at rest--which, we noticed, also turned off the power assist for the steering.

It being winter (see photos), we didn't test whether any air conditioning would stop as well with the engine off, though we would suspect it would, since it's unlikely VW would fit an expensive electric air-conditioning compressor.

Two more winter notes: First, after an overnight cold soak, it took almost a second for the diesel to fire after the ignition was switched on. This is far better than the 10-second glow plugs in diesels of the Eighties, but it was a little reminder of the different powerplant.

Second, our Tiguan TDI was fitted with low-profile European summer tires that proved a bad match for snowy, greasy winter roads--meaning we have no comment on its handling, since we did nothing remotely aggressive.

Slow off the mark, then a surge

Unlike the more powerful Audi Q5 TDI, which used a 240-horsepower, 3.0-liter V-6 turbodiesel putting out a prodigious 428 lb-ft of torque, the Tiguan TDI was slightly slow off the mark in its first second or two.

But using the paddle shifters behind the wheel to keep the revs above, say, 2000 rpm (redline was 5000 rpm), the Tiguan would surge forward, with the DSG snapping off quick shifts and the crossover gathering speed quickly.

Over our usual test route of 250 miles or so, comprising about two-thirds highway travel and one-third city and suburban traffic, we averaged 33.6 miles per gallon.

The European combined cycle fuel-efficiency test rates the model at 37 mpg combined, though those results tend to be 20 percent higher than equivalent EPA ratings.

By way of comparison, the gasoline Tiguan is rated at 21 mpg combined in its front-wheel-drive model with a six-speed manual gearbox, and 23 mpg combined with the DSG automatic (with either front-wheel or all-wheel drive).

So why didn't VW offer a diesel option for the Tiguan when it launched its first compact crossover as a 2006 model?

The issue likely comes down to price. While the Golf and Jetta models were able to meet strict new emission standards several years ago without adding urea injection, larger and heavier vehicles (including the Passat) would require the more sophisticated aftertreatment technology.

That's more easily justified on a luxury brand like Audi or Mercedes-Benz, less so on a mass-market vehicle like a VW.

A diesel Tiguan may have started at $30,000 or more, which VW likely viewed as simply too pricey in a category where young families are often highly sensitive to purchase price.

The gasoline Tiguan offered for sale in the U.S. starts at about $23,000 for the base S model (whose gas mileage is slightly lower than all other Tiguans), but rises above $36,500 for the sporty R-Line model with unique appearance items.

Finally, we have to say that we applaud Volkswagen's U.S. unit not only for bringing in some of its products from outside North America, but letting us drive them--for several miles to several days.

This is actually our fourth such car from VW in less than two years. As well as the Tiguan TDI, we've driven the Volkswagen Up minicar, the Scirocco R sports coupe, and the XL1 diesel plug-in hybrid ultra-economy car.

We appreciate the chance to experience these diverse vehicles, and we think it reflects well on VW's confidence in its products.