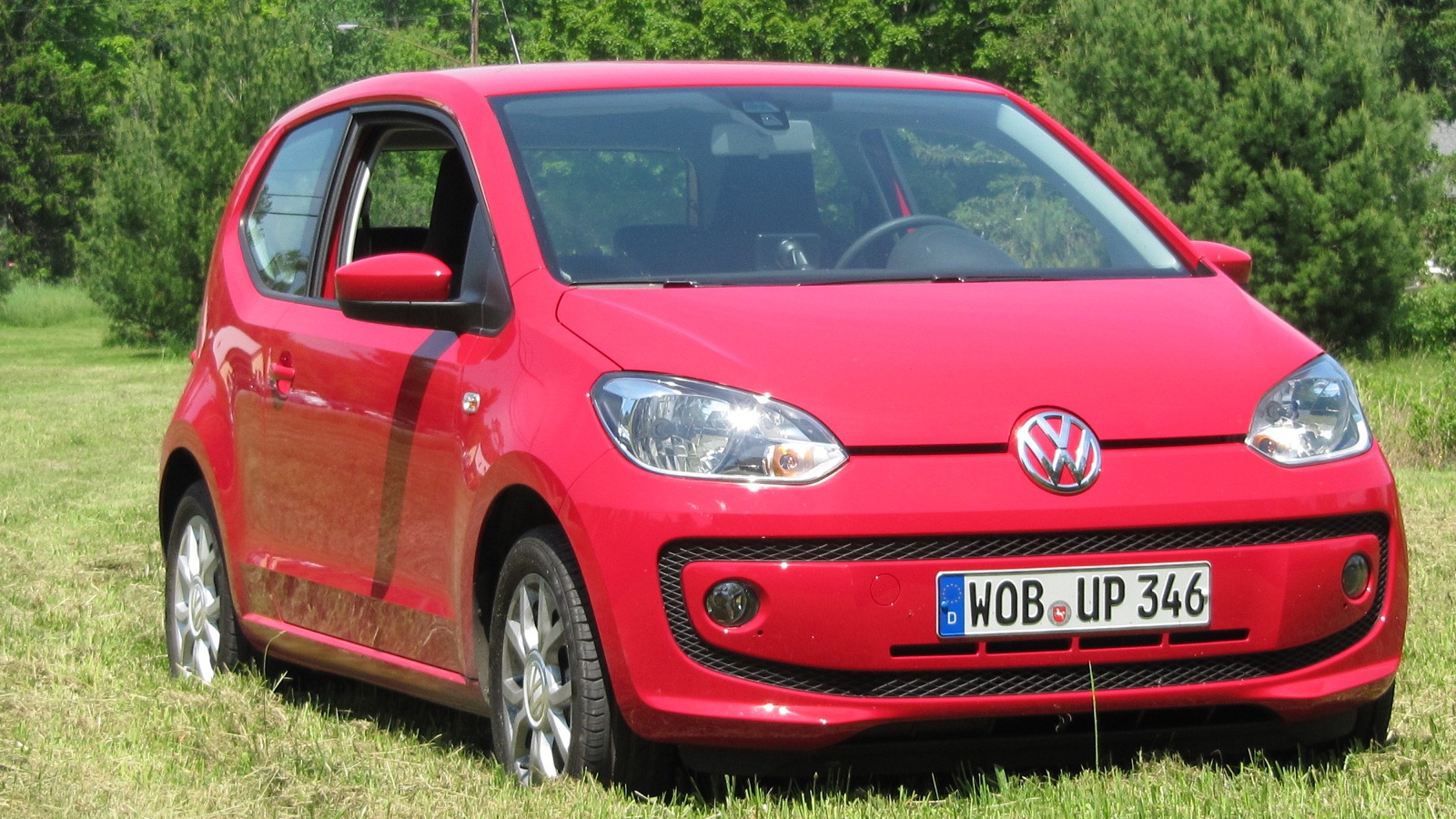 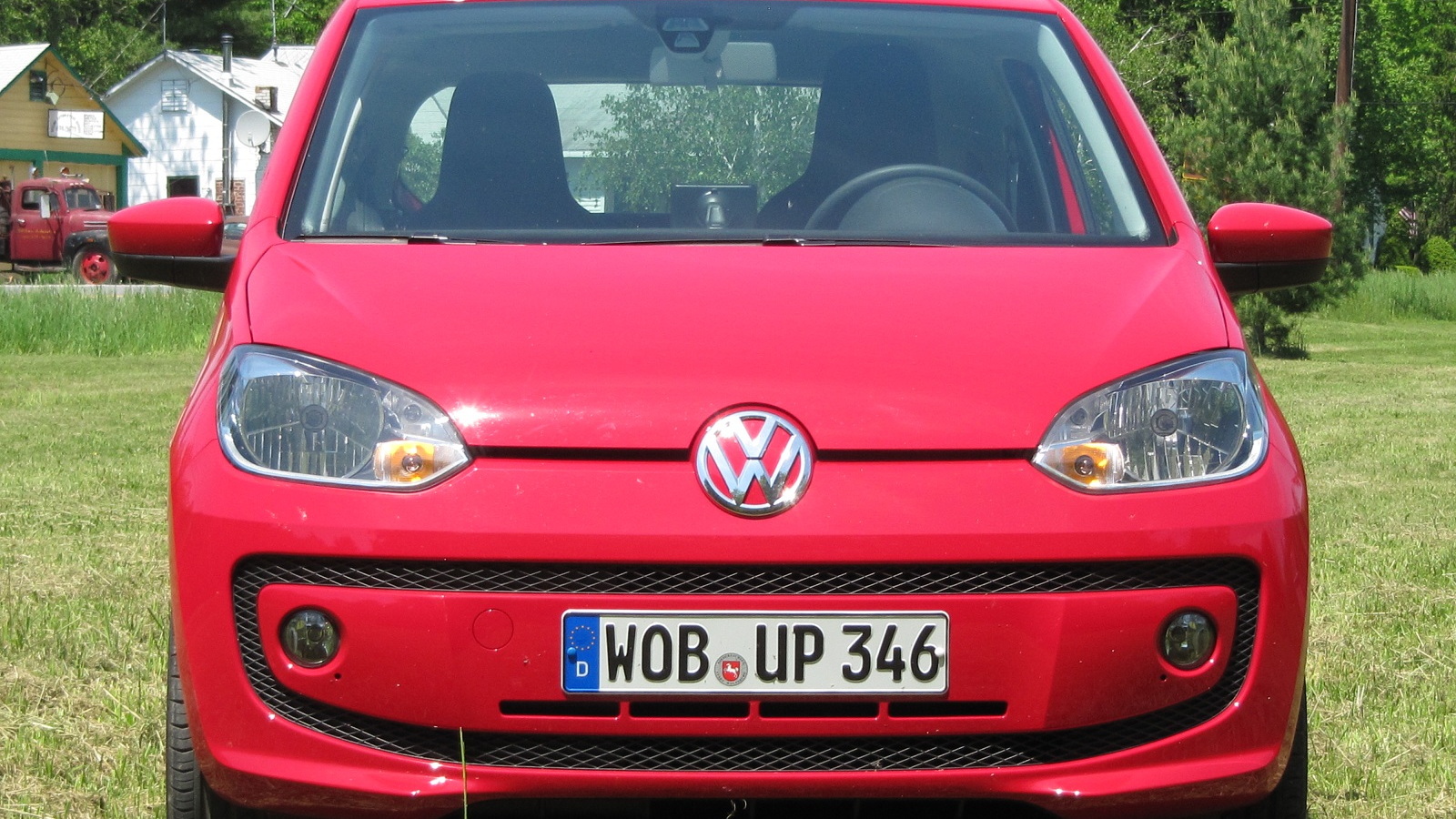 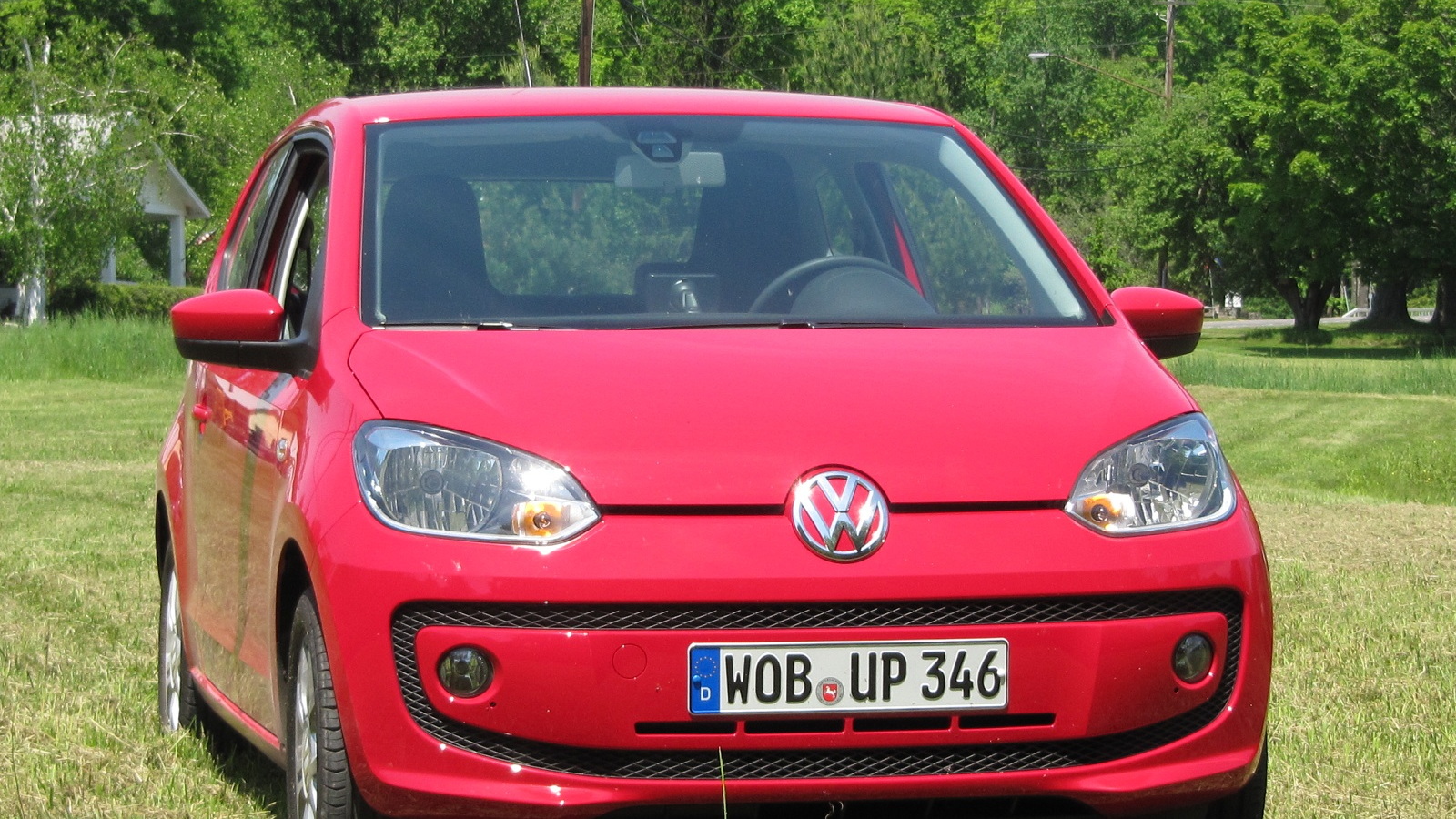 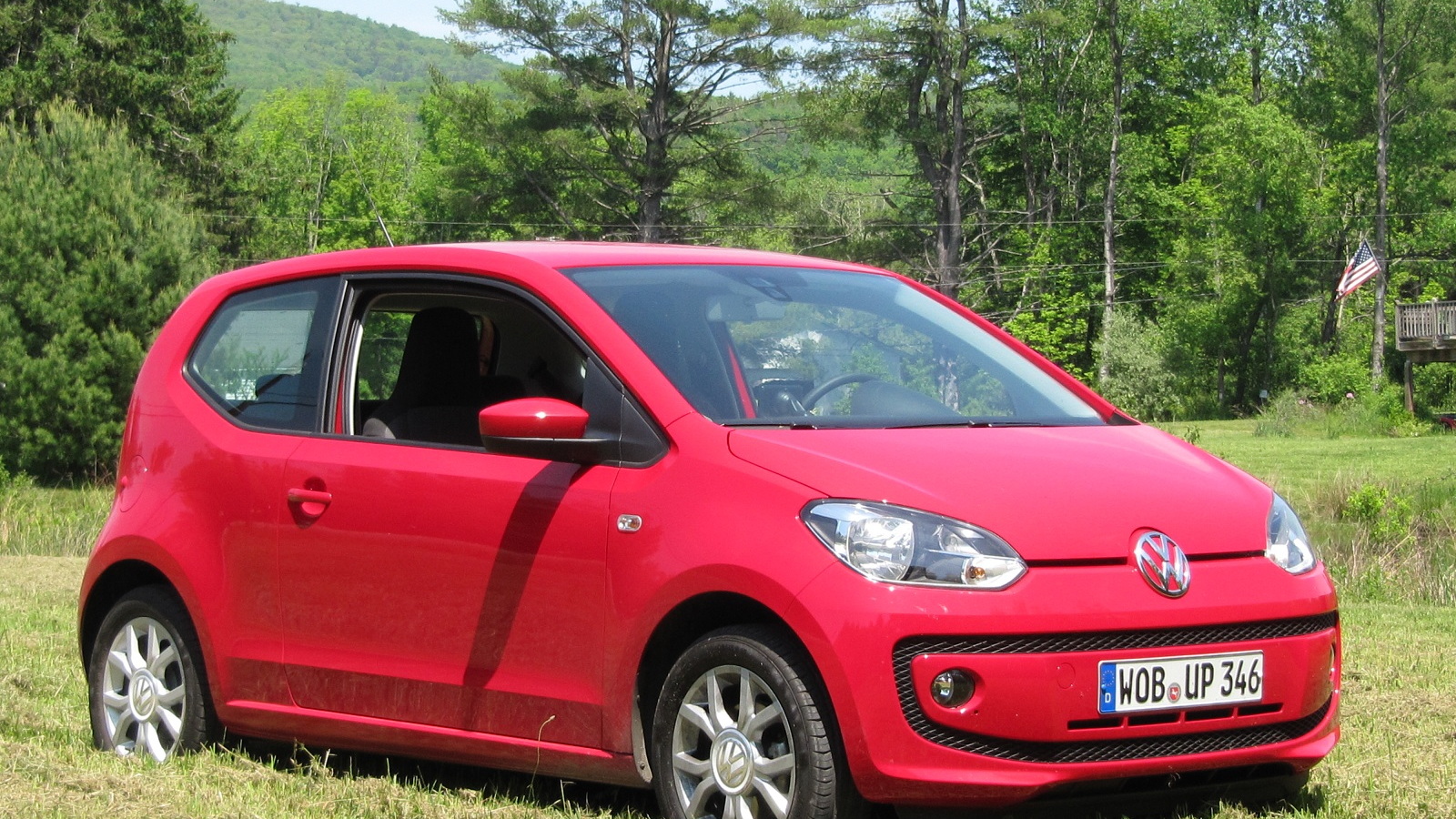 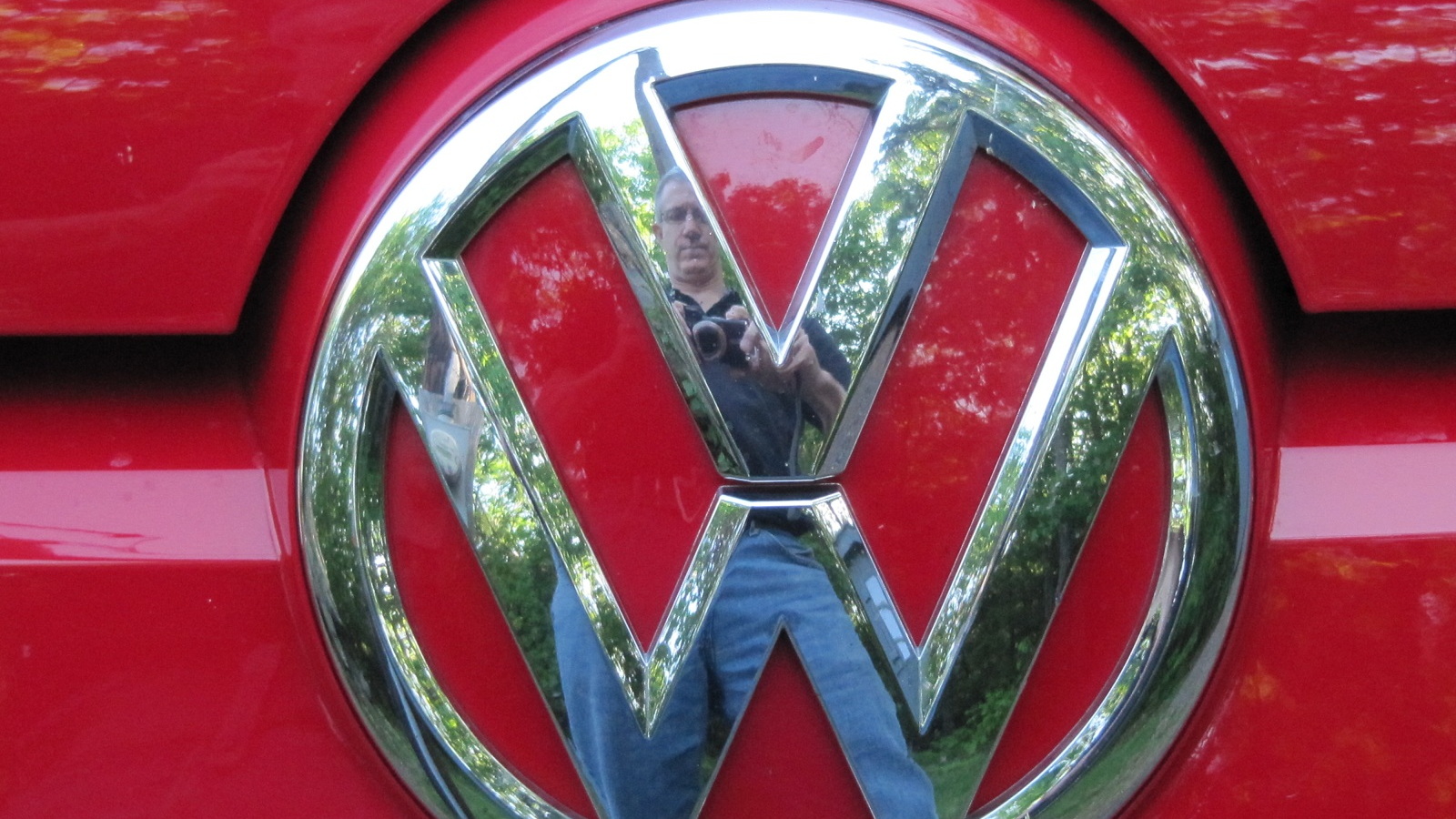 The Volkswagen Up is a small, simple, very modern hatchback minicar that's fun to drive, keeps up with U.S. traffic, and returns 40 to 60 miles per gallon.

But you won't be able to buy one in North America. And that's a shame.

We drive a lot of cars here, most of them perfectly competent subcompact or compact sedans that return 30 mpg or better.

They're rarely all that memorable, but the VW Up has stuck with us after an all-too-short three days.

In part, that's because it reminds us of our much-loved Volkswagen Rabbit (first-generation Golf), which we last drove in the guise of the South African VW CitiGolf.

The Up is 6 inches shorter than the first Golf (in European trim). It weighs about the same, and has roughly the same power--but adds modern safety, refinement, and features to the old Rabbit's go-cart handling, cheerful performance, and unabashed simplicity.

Volkswagen of America brought the Up three-door hatchback over from Europe, where it was introduced last year, to give U.S. journalists a chance to see what else the company offers globally.

Compared to the current VW Jetta compact sedan, the VW Up is tiny, at only 139 inches long. That's 8 inches shorter than a Mini Cooper, though more than 2 feet longer than a Smart ForTwo.

It's two car sizes below the compact Golf hatchback, with the subcompact Polo in between. (That's another car we won't get in the States, at least until it's redesigned in a few years.)

The model we drove was the top-end "High Up," with handsome 15-inch alloy wheels, air conditioning, power windows, locks, and mirrors, heated front seats, and a leather-trimmed steering wheel.

The base model of the Up, which sells for less than €10,000, or about $12,750, has no power windows, locks, or mirrors, no air-conditioning, and no seat-height adjustment, among other base-level features.

Those items added just enough luxe to take our Up model out of grim econobox territory, while the painted metal on the doors harkened right back to that first Golf. (Unlike the body-color plastic dash trim on the new VW Beetle, it's the actual metal door panel.)

Volkswagen also sells a variation of the Up as the Škoda CitiGo, Škoda being the Czech brand it bought into the VW Group in 2000 that serves as its value offering. We've driven the CitiGo too.

The front seats are basic but comfortable, though to fit a pair of adults in the rear, the front occupants will have to move their seats a foot or so forward.

The load bay is surprisingly capacious, accommodating an entire shopping cart full of groceries in a deep and wide space that looks short but holds a remarkable amount.

More importantly, the VW Up is light, with a curb weight of just 2,050 pounds.

It meets all current and anticipated European safety standards, but not the more stringent U.S. standards--one reason it won't be sold here.

The light weight and minimal design is how it achieves its fuel efficiency, with power being provided by a 75-horsepower, 1.0-liter three-cylinder engine mated to a five-speed manual transmission.

While the engine's limited 70 lb-ft of torque makes the Up a little slow off the line, it revs happily up to a 6,250-rpm redline and delivers more than adequate power once underway.

And the Up is fun to fling around in traffic, while staying surprisingly quiet inside at freeway speeds.

So what about the gas mileage?

Regrettably, we can't provide an overall rating because we didn't figure out how to change the display language from German to English until halfway through the test. For the longest leg of our trip (125 miles), we got 47 mpg (5.0 l/100km).

The fuel gauge still read slightly above 1/4 at the end of our test, though, so with a 9.2-gallon tank we figure overall average economy would be at least 45 mpg, perhaps more.

In European tests, it's rated at 40 mpg city, 50 mpg highway. Those ratings tend to be 15 to 20 percent more optimistic than U.S. ratings from the EPA, which uses a different test cycle.

The Up's basic nature revealed itself in a few ways, some unexpected, a few amusing.

With the driver's window open, it's possible to hear the clunks inside the gearbox when you shift or release the clutch at low speed. While the tachometer works fine, it's so tiny that it requires concentrated focus to read.

The Up comes with a wonderful, loud, aggressive German horn--oceans away from the anemic wheezing beeps found on most Japanese cars. We didn't use it much, but when a larger vehicle started to merge into our lane, it made the driver pay attention immediately.

And we noticed that a lot of the expected U.S. safety gear--from height-adjustable shoulder-belt anchors to a steering-wheel lock and even an auto-down driver's window--was missing.

The VW Up, now offered in three-door and five-door hatchback models and with more variations to come, is a major new line for Volkswagen.

The company invested heavily not only in the car, but in the all-new three-cylinder engine and smaller, lighter components for maximum efficiency. The air-conditioning compressor looked little larger than a man's fist, for instance.

VW is offering the Up to stake out its territory in the growing class of ultra-small European and Asian cars that can still be used with confidence on the highway when needed.

We were much more impressed by this admittedly top-end VW Up than we expected.

And we're sad that it won't be "Federalized" to bring it to the States.

But here's why that isn't likely to happen:

While those are all fixable problems--as would be the fitting of the various mandated U.S. buzzers and interlocks--the structural changes would add weight, cutting performance and reducing fuel efficiency.

That might require a larger engine to power the heavier car, further cutting gas mileage.

In effect, VW could find itself in a vicious cycle that would harm the elements of the Up that make it such a delight to drive in its original form.

Most importantly, though, VW won't take a chance on selling the Up here when the U.S. market for cars this small is still ... well, small.

Before it considers entering that segment, Volkswagen first has to extend its range downward from the Golf and Jetta to the next generation of the Polo subcompact.

Meanwhile, we'll simply plan to rent a VW Up next time we travel to Europe. And we might suggest you plan to do the same.

It'll give you a whole new perspective on small cars.