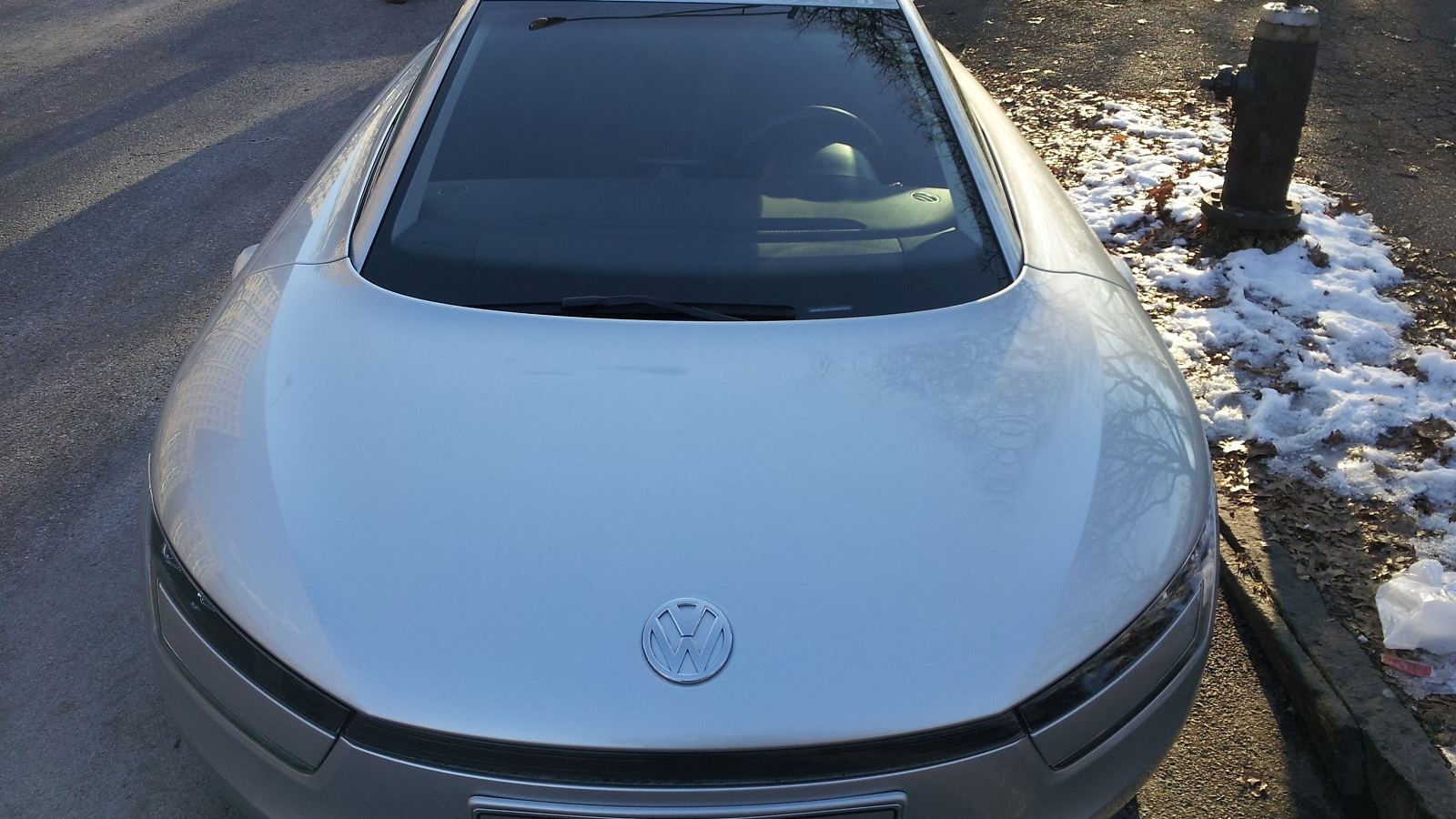 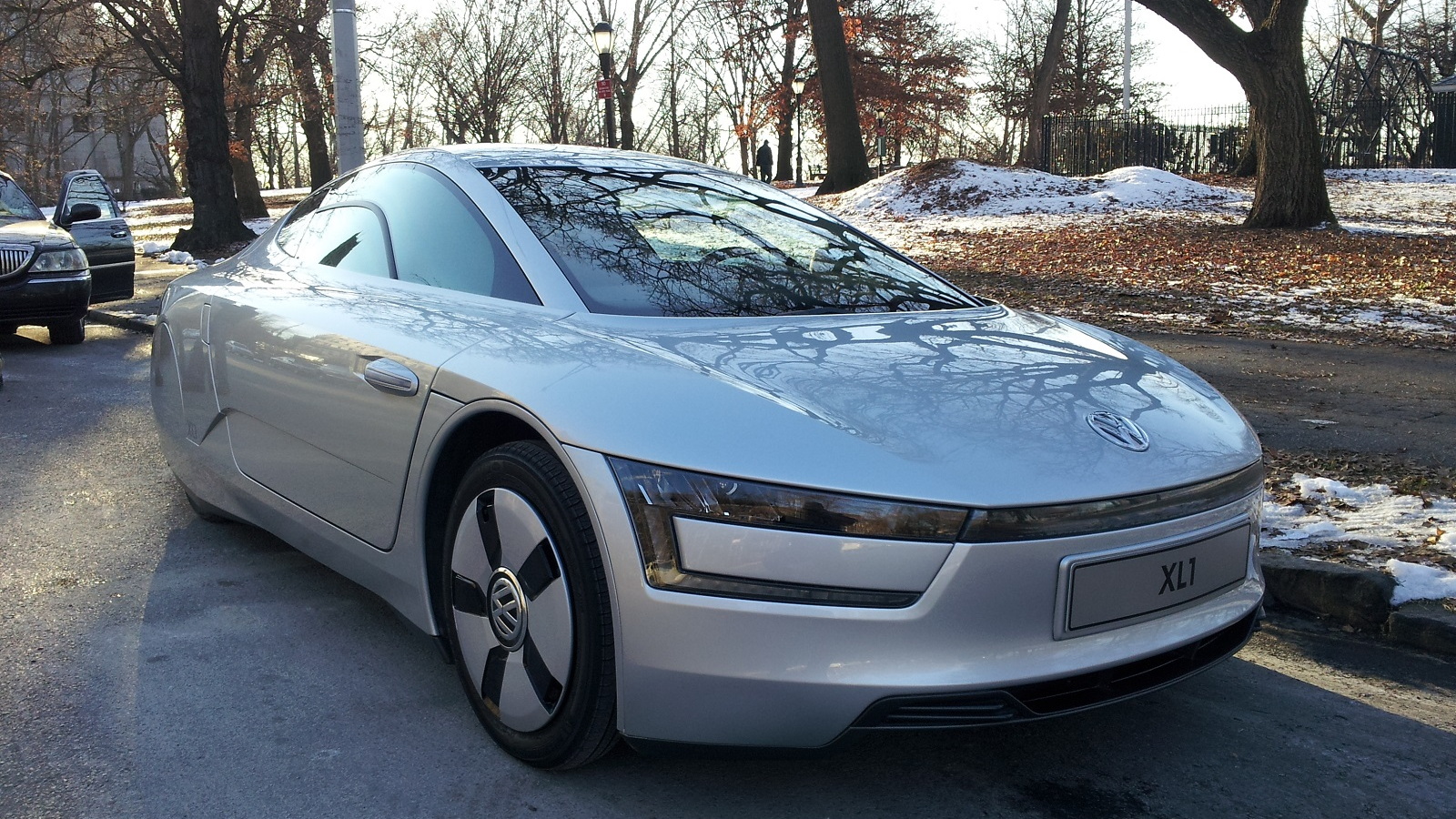 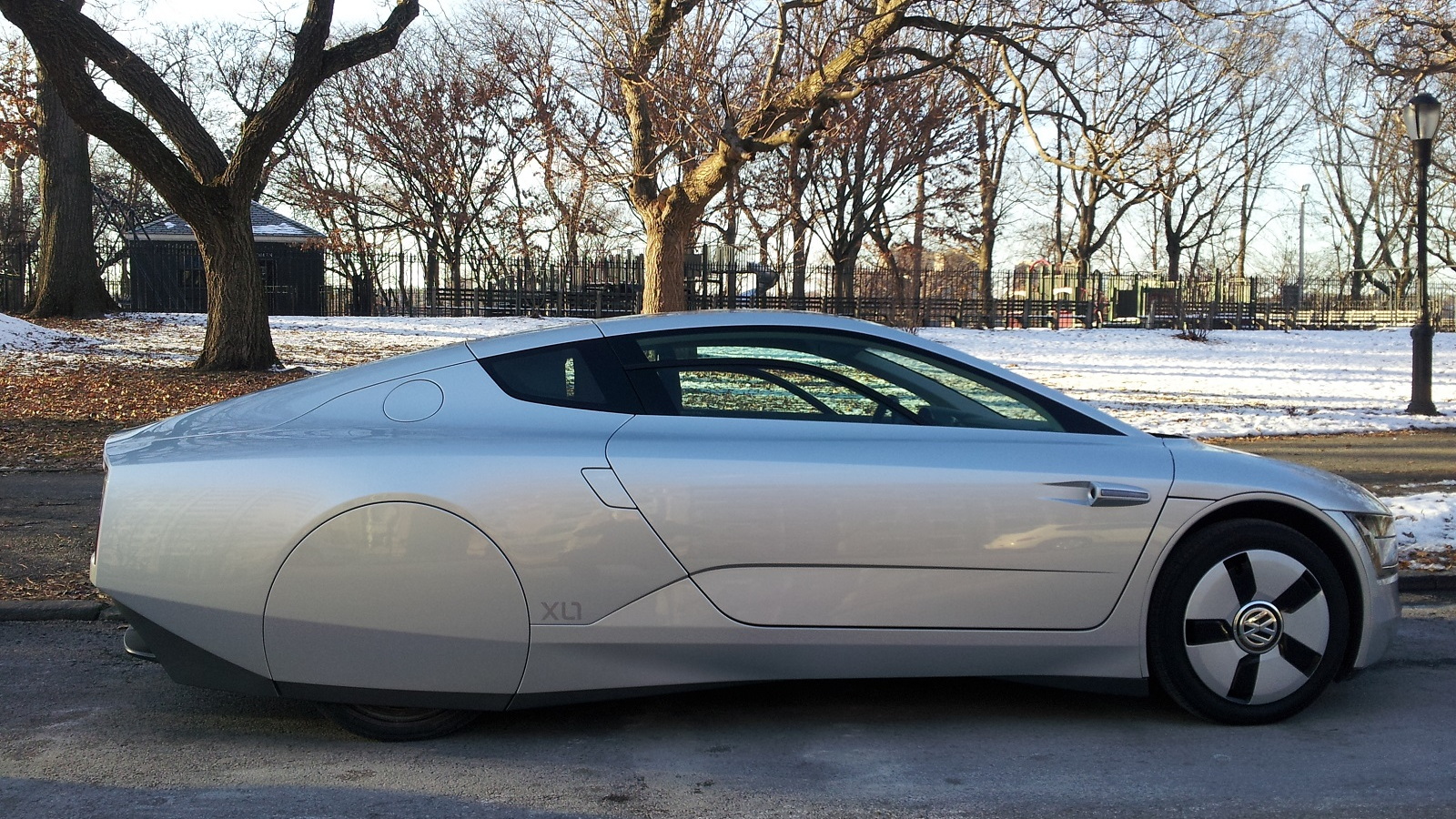 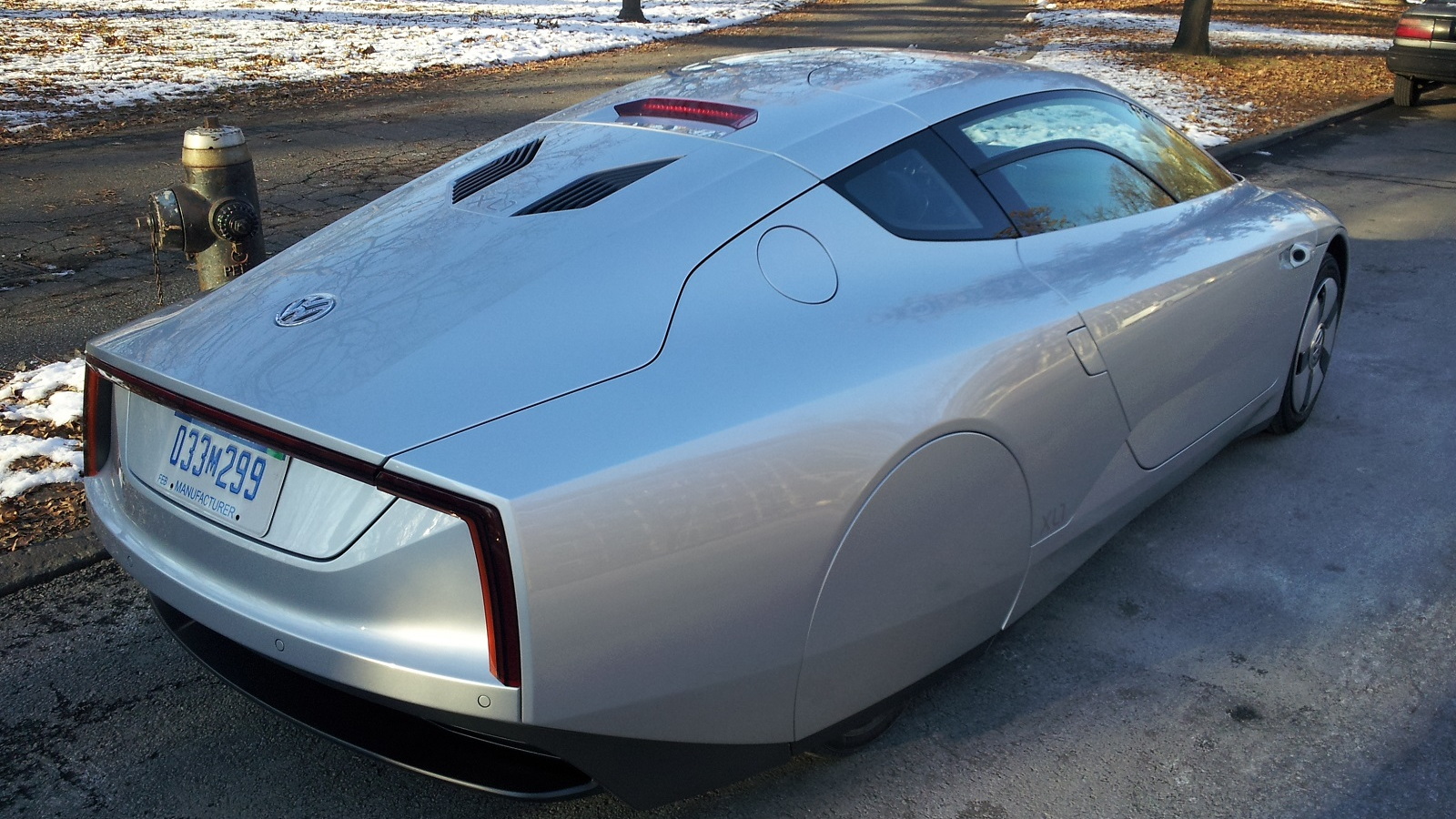 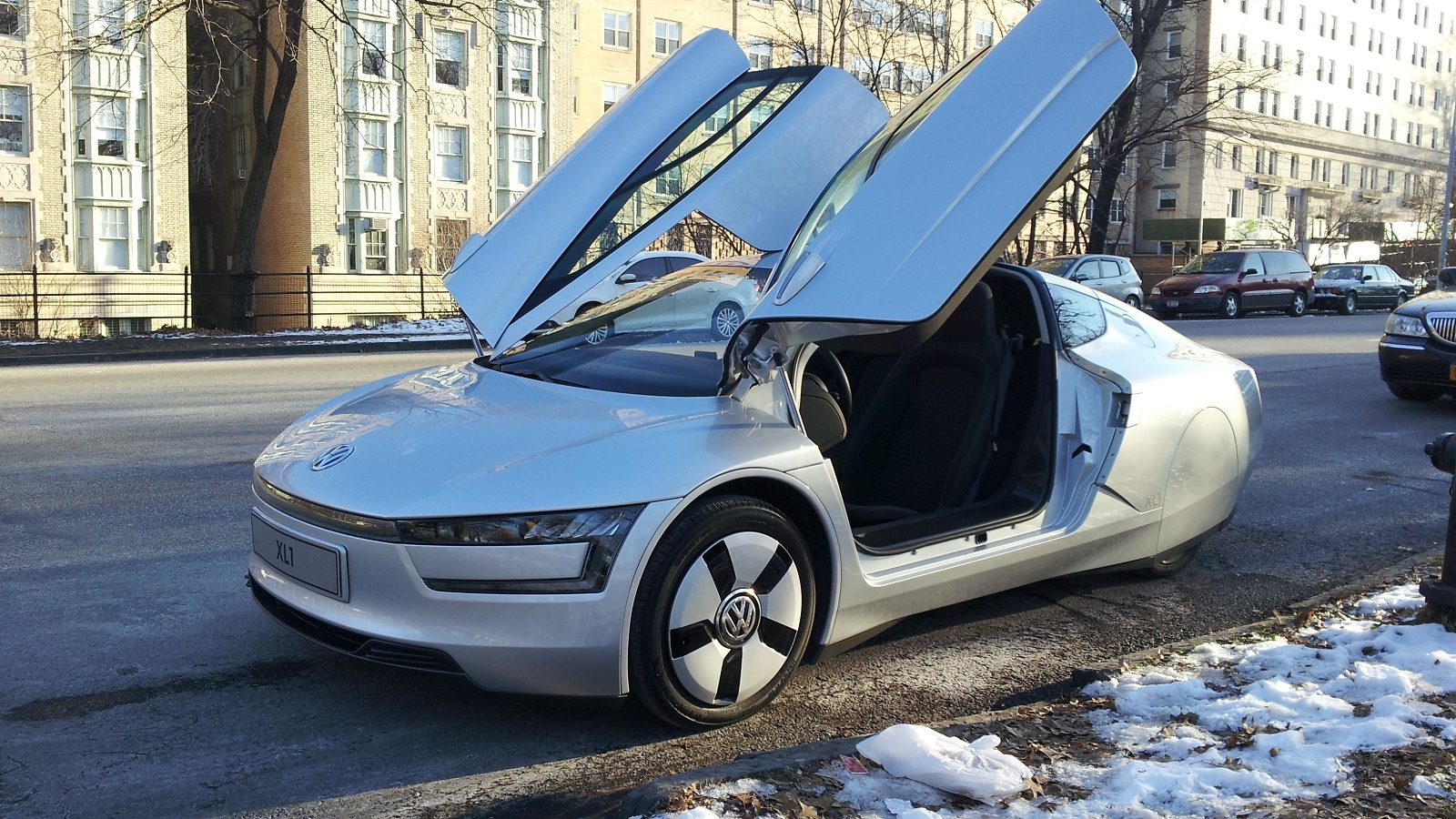 We didn't expect the Volkswagen XL1 to be as much fun to drive as it is.

Which makes it doubly a shame that Volkswagen won't be selling its radically efficient, two-seat, plug-in diesel hybrid XL1 model in North America.

Like that pioneering hybrid, the two-seat XL1 is supremely aerodynamic (its drag coefficient is 0.19), very light (1,750 pounds), and uses a tiny engine paired with an electric motor.

In this case, though, the engine is a 48-horsepower 0.8-liter direct-injected and turbocharged two-cylinder diesel (essentially half of a 1.6-liter VW four-cylinder diesel engine).

Also unlike the old Insight, the VW XL1 has a 5.5-kilowatt-hour lithium-ion battery pack that can be plugged into the electric grid to recharge.

Volkswagen quotes up to 31 miles of all-electric range, though we'd caution that it's likely to be under fairly low-speed circumstances.

It's the efficiency when running as a pure hybrid that's the truly impressive part: On the European cycle, the XL1 is rated at 138 mpg (1.7 liters per 100 km) once its battery is depleted and it's operating as a hybrid.

As always, take that figure with a large grain of salt, since European test cycles are very different to the EPA procedures that provide window-sticker fuel efficiency numbers.

Still, it's safe to say that the VW XL1 is a very, very efficient vehicle.

The passenger toeboard is further back than the driver's pedals as well, to provide space for the battery pack, and the bulkhead behind the seats divides the passenger compartment from the mid-mounted engine, motor, and transmission units.

That means the passenger has to scoot forward considerably and stretch skyward to reach the bottom of the gull-wing door to close it. (Opening it takes another trick: the interior handle is actually in the door sill next to the low seat.)

The XL1 is built of carbon-fiber-reinforced plastic (CFRP), like the BMW i3 electric car, with aluminum and magnesium crash structures and stiffening beams where needed.

That's how VW keeps the weight notably below 2,000 pounds while still meeting all the latest crash-safety requirements.

Behind the small, flat-bottomed steering wheel is a conventional instrument binnacle--supplemented by a freestanding small rectangular display in the center of the dash (again, like the BMW i3).

Like any plug-in hybrid car, pressing the Start button lights up the instruments but doesn't necessarily switch on the engine.

Moving away under electric power, though, the driver can hear the motor whine rise with speed. It's not necessarily obtrusive--we learned to screen it out after a while--but it's louder than any other electrified car we've driven in three years.

But it's when more power is demanded and the diesel engine kicks on that drivers first start to grin. Because VW deemed car-like sound insulation too heavy, the XL1 is one of the louder cars we've driven of late.

It's not so loud you can't talk--and the mid-engine layout helps, since the sound is behind both passengers--but it's definitely noticeable.

And the engine sound is like nothing else we've experienced. The best approximation we could come up with is that it sounds like a very old, rackety motorboat engine that just fired up behind your right ear.

With two separate catalysts, each almost as large as the cylinder block, and modern emissions aftertreatment for the little diesel, the noise is relatively restrained.

And, oddly, once the car is at highway speeds, the engine is almost silent, with the noise apparently emanating only from the rear of the car.

Volkswagen quotes a 0-to-62-mph acceleration time of 12.7 seconds, which felt right to us. The car moves out from a stop smartly enough, but flooring it to accelerate on an uphill on-ramp reveals the limits of its 68 hp--even in such a light car.

The remarkable thing, however, was its momentum once at speed. On an almost imperceptibly downhill stretch of highway, the entire powertrain switched off and the XL1 just glided--not for the few seconds at a time that some hybrids can manage at highway speeds, but for large parts of a minute at a time.

Hit a slight uphill, however, and at speed the motorboat kicked in pretty quickly.

Still, we came to appreciate just how little power was required to keep the XL1 in motion even at highway speeds.

VW says it requires just 8.4 hp 8.3 hp to keep the car moving at a steady 60 mph 62 mph on flat pavement--less than half the power required for the same task in the company's most economical European production model.

The unexpectedly fun part of driving the XL1 was the handling.

The unassisted steering--and when's the last time you drove a car without power steering?--is extremely quick, far closer to that of a track racing car than a street vehicle.

That made it easy to change lanes with lighting speed, once we'd carefully checked the video screens in each door to make sure it was safe.

And the ride, while firm, was better damped than expected from the noise--while passengers heard the car's tires thump through potholes,

The Volkswagen XL1, you see, has no rear window and no conventional door mirrors--which increase a car's aerodynamic drag a great deal.

From the rear, the engine vents in its long tapered tail give it the air of a 1930s German streamliner, with crisper edges.

Instead of mirrors, a pair of video cameras inset into its gull-wing doors transmit images to rectangular screens at the front of the inside door panels, several inches below the car's beltline.

The image quality varied a lot with the light, and the late-afternoon sun low on the horizon seemed to reduce image crispness a lot. We also found the XL1 has no sun visors.

It's all in the interests of reducing weight and cutting drag.

All too soon, our 10-mile drive was over and we pulled back up to the curb at Manhattan's large Volkswagen dealership.

And just as they had before, pedestrians and drivers craned their necks, took photos, and asked questions.

The most common question: Is it electric? ("Not entirely; it's a plug-in hybrid.")

Next most common: What kind of gas mileage does it get? ("Well, probably more than 100 mpg--on diesel fuel.")

That was the point at which you could see the neurons start to misfire.

Lessons for the future

Our best advice was to wait and see how and where Volkswagen uses the lessons it's learned from making the XL1 into a production vehicle.

It may use the car's plug-in diesel hybrid powertrain in its VW Up minicar, in a so-far-unconfirmed version called the TwinUp.

Or it may bring CFRP bodyshells into production.

And you may want to watch for rear-view door cameras to replace mirrors, once the U.S. National Highway Traffic Safety Administration figures out how to make them both legal and safe.

Until then, the Volkswagen XL1 remains a rare, ultra-efficient, and surprisingly fun car to drive.

So, Volkswagen: We'd like one for, oh, a couple of months, please.

You know, to provide some real-world feedback.