It's become increasingly common for carmakers to solicit volunteers to lease new-technology cars for a year or two, to gather real-world data about how the cars are actually driven and used.

But those cars remain development prototypes, not production-quality vehicles.

And as BMW ActiveE drivers have learned of late, sometimes there can be quality issues--and, now, an official recall.

The limited-edition ActiveE is BMW's electric conversion of a BMW 1-Series two-door sedan, of which 700 are now on U.S. roads.

The drivetrain housing assembly in those vehicles may not have been adequately sealed at the factory, meaning that gear shaft was not sufficiently lubricated.

Over time, the connection between the electric drive motor and the gear assembly could become worn--and fail suddenly

In the case of this sudden failure--experienced by more than a dozen BMW ActiveE drivers--the loss of lubrication over time would cause the gear to grind on the electric motor output shaft until one or more splines failed.

That problem, known among owners as "splining," required the fitting of a complete new motor.

At least 16 such failures among lessees have occurred, one as early as last August, but the recall notice came only after multiple failures were reported.

A modified motor design, including the new gasket, was introduced in October, but a backlog of replacement motors from BMW meant that some ActiveEs stayed out of service for up to several weeks.

For cars in which a visual inspection shows the motor splines to be fine, the recall consists of adding a gasket between the motor and gear assembly, and ensuring that the two components are properly sealed together.

Roughly half the cars had the modification made during regular servicing, according to BMW's Dave Buchko. 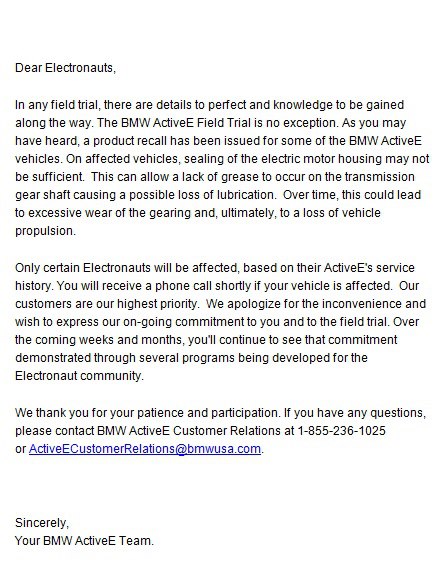 The recall began last month, with BMW sending letters to owners of the affected cars. Just 360 cars are affected by the recall, out of a total of 1,100 ActiveEs built  (700 are on U.S. roads, along with 400 in other markets).

BMW is providing loaner vehicles to ActiveE lessees while their cars are in for service, and reimbursing gasoline costs for up to 100 miles a day (assuming gas mileage of 20 mpg and a gasoline cost of $4 per gallon).

The BMW ActiveE is part of what its maker calls a "field trial leasing program," and they will all be taken back when their leases expire.

It's actually the second trial fleet for BMW; the first was the 2009 Mini E program, and many Mini E drivers were offered--and accepted--leases on an ActiveE once the Mini E lease ended.

Similarly, many ActiveE drivers hope to be able to purchase the first production electric vehicle from the German automaker; the 2014 BMW i3 is expected to be formally released this fall at the Frankfurt Motor Show.

One driver gives up

At least one ActiveE lessee, Bodo Albrecht, decided mid-stream that the ActiveE really didn't suit him. He wrote about surrendering the car to BMW on The Enigma, his blog. 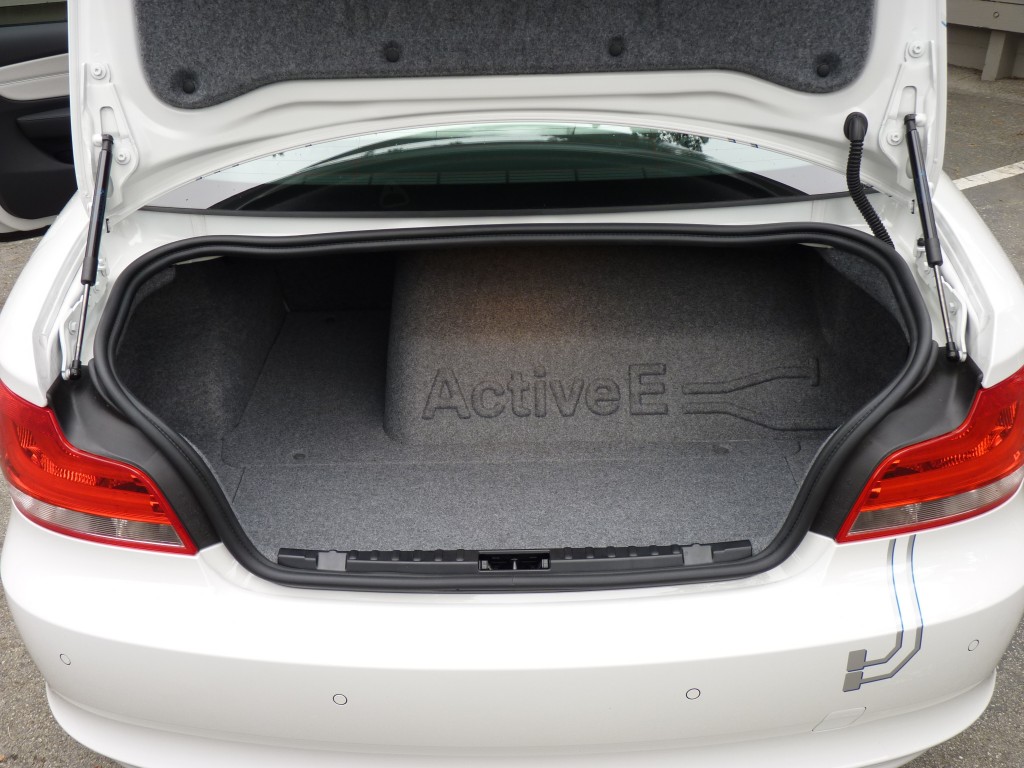 Albrecht counts himself a fervent fan of plug-in cars and electric propulsion, writing, "I am convinced that electric cars are the future."

But his frustration over the car's reduced range in cold winter weather--70 miles, rather than the 100 miles advertised by BMW or the 94-mile rating given by the EPA--finally meant the car had to go.

In his epitaph for his car, Albrecht also expressed frustration over the way BMW administers its "Electronaut" program and the ActiveE's limited trunk space--though he lauded the car's advantages, and linked to a more positive assessment by ActiveE evangelist Tom Moloughney.

Regrettably, Albrecht can't say what happened to the car or under what terms he was able to cancel his lease.

BMW apparently requires any owner wishing to get out of an ActiveE lease to sign a confidentiality agreement first.