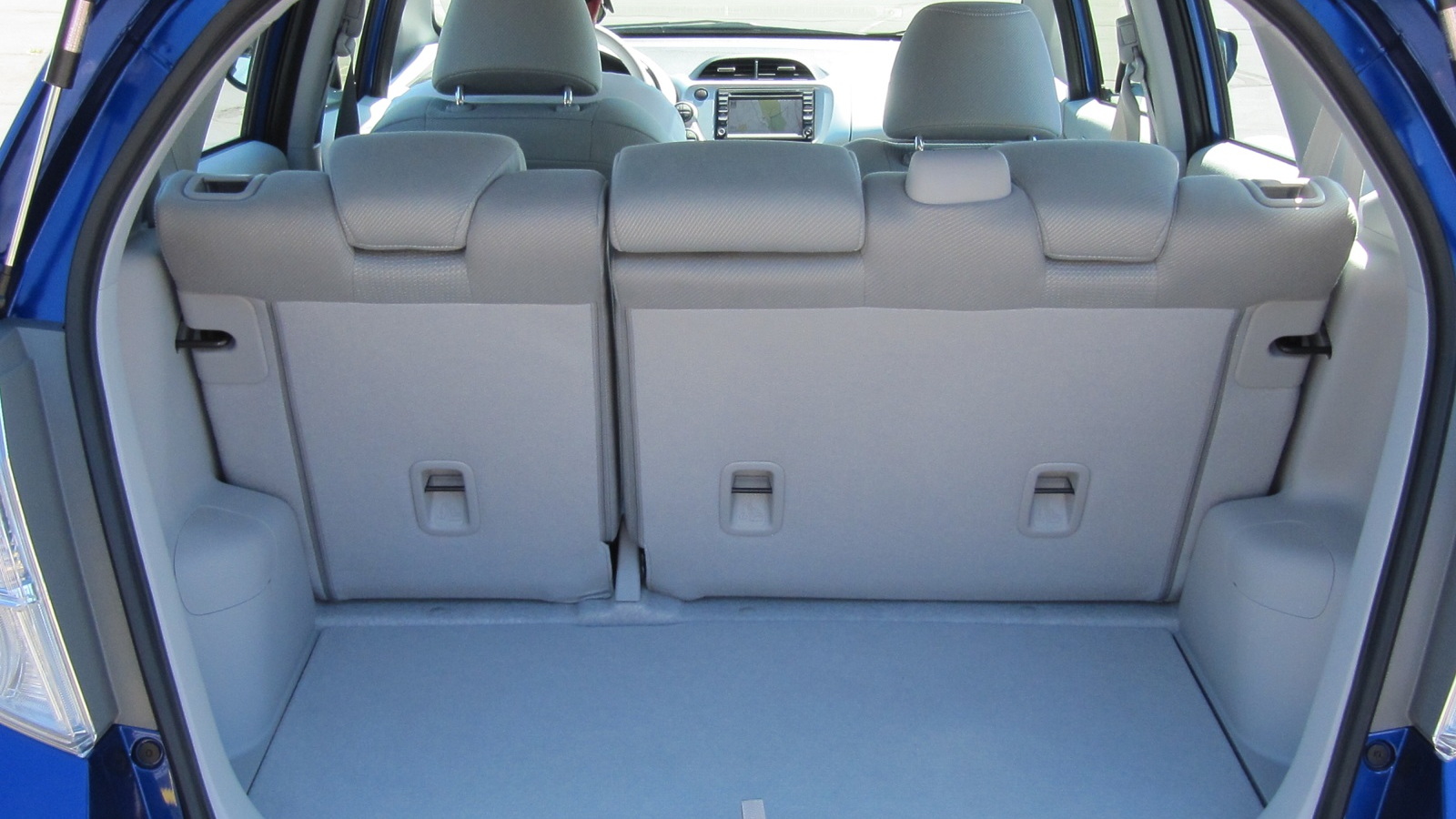 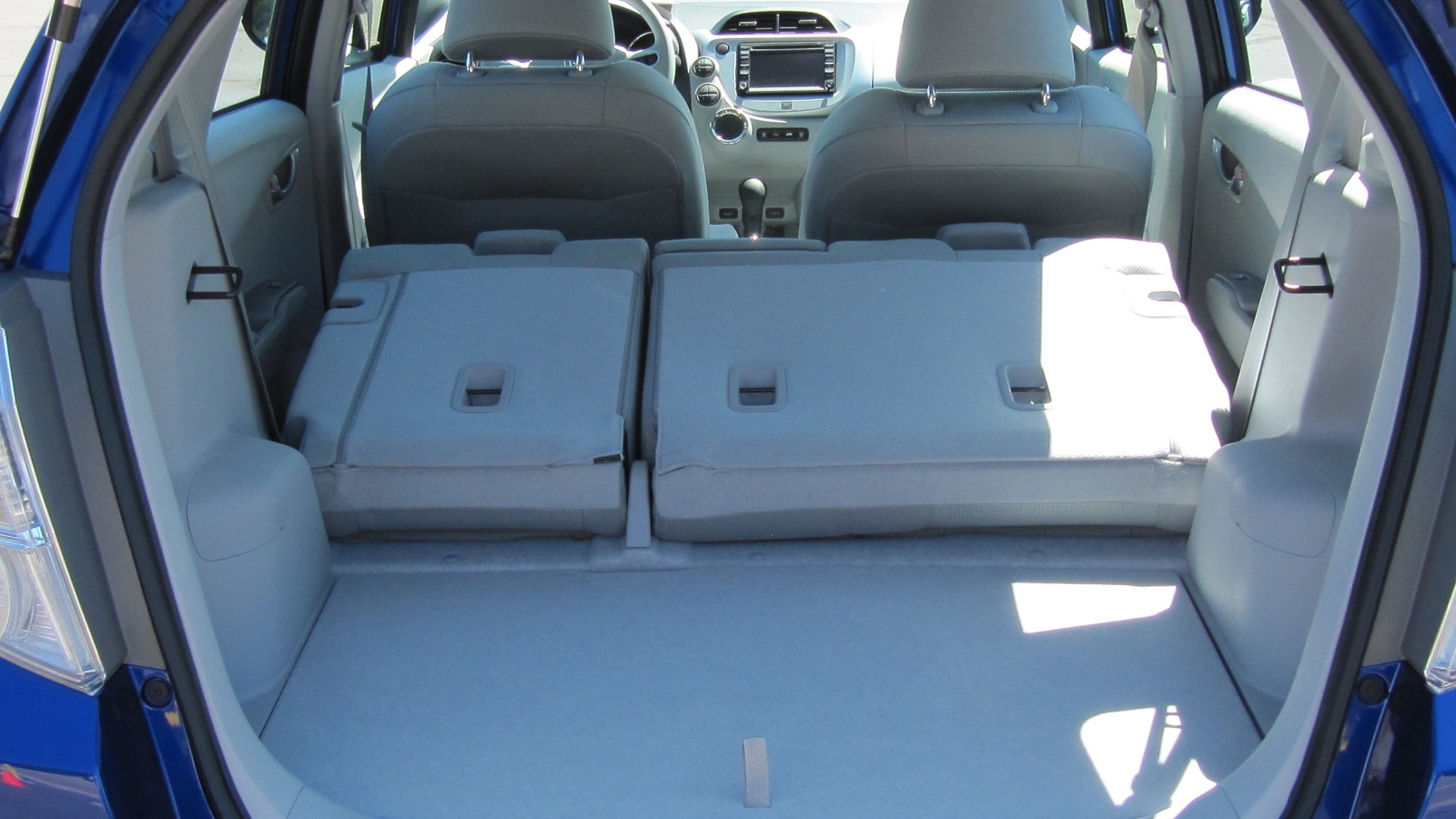 The 2013 Honda Fit EV is a fun and well-executed little all-electric hatchback.

It's quick, handles decently, gets the highest EPA efficiency rating of any vehicle on the market (118 MPGe), and its rated range of 82 miles is longer than that of the somewhat larger Nissan Leaf.

Too bad you have very little chance of buying one.

That's because the Honda Fit EV is a "compliance car," a vehicle built to ensure its maker meets California rules requiring sales of a certain number of zero-emission vehicles.

Quizzed at the introductory drive event this week about prospects for the Fit EV, Honda executives said repeatedly that 1,100 cars would be the number it will build and sell during 2013 and 2014.

It is a test vehicle that will let Honda learn about how real-world drivers use electric cars, Honda says. It will provide data on how dealers need to prepare for and support plug-in car sales, and whether there is actually a sustainable market for all-electric vehicles.

Would Honda make more Fit EVs if demand exceeds its production total of 1,100? The answer appears to be "no."

The 2013 Honda Fit EV goes on sale next month in selected California markets and Portland, Oregon, and will be extended next spring into such East Coast markets as Boston, New York, Hartford, Baltimore, and Washington, D.C. (That's a tentative list, Honda said.)

It cannot be bought outright, however, meaning that Honda can (and likely will) take back the cars at the end of the lease period to avoid the cost of ongoing service and spare parts supplies.

The production 2013 Honda Fit EV uses the electric motor from the Honda FCX Clarity hydrogen fuel-cell vehicle, a much larger car, which develops a peak power of 92 kilowatts (123 horsepower).

The 20-kilowatt-hour lithium-ion battery pack, using lithium-titanate oxide cells provided by Toshiba, is mounted in the floor and under the rear seat, cooled via fans that force air through the pack itself.

A recharging port door on the left front fender is outlined in blue LEDs that light up while charging takes place.

Honda has built in a 6.6-kilowatt charger, meaning that a full pack recharge can take 3 hours or less. Honda offers a Leviton Level 2 home charging station to Fit EV lessees, while its Fit EV-authorized dealers can recommend local inspection and installation partners.

Lower drag of a compact sedan

In adapting the current Fit, launched in 2009, to electric drive, Honda focused both on drivetrain efficiency and improving the aerodynamics of the subcompact five-door hatchback.

The front and rear bumper fascias and side sill extensions have been reshaped to smooth airflow around and past the car, and a very different roof spoiler has been fitted over the rear window.

Together, those changes reduce the drag coefficient by 14 percent, Honda said, making the Fit EV as slippery as a longer (and hence more aerodynamic) sedan.

The floor-mounted battery pack requires the entire car to be raised half an inch, with larger plastic trim surrounding the wheel-well edges to balance the increased height.

A 6-foot-tall man sitting in the back had adequate legroom, but only about 2 inches of headroom--and the rake of the seatback was noticeable and, to some, uncomfortable.

With the rear seat moved back and a flat load floor stretching from the base of the tailgate, cargo volume is somewhat lower than that of the standard Fit.

More importantly, while the 60/40 split rear seatback folds forward, the seat is fixed and no longer folds down on itself and forward to open up the entire rear of the car for cargo.

In that, we'd say Honda was largely successful.

Like an increasing number of cars today, the Honda Fit EV offers a choice of driving modes. The default is "Normal," with a more powerful "Sport" mode and a power-saving "Eco" mode--selected with buttons on the left projection of the instrument cluster behind the steering wheel.

Normal mode, which provides 75 kW (101 hp) of motor output, is sufficient for most everyday uses.

Eco mode, on the other hand, which restricts output to 47 kW (63 hp), is grim and frustrating, and will likely be used only by the most masochistic...errrrr, dedicated...of drivers.

Sport mode: the fun one!

Click the Fit EV into Sport mode, though, and the fun factor increases. It becomes a powerful subcompact, with lots of torque delivered from rest, and offers the ability to spin the inside front wheel when accelerating through turns--even uphill.

Honda said Sport mode gives the Fit EV equivalent performance to that of a gasoline vehicle with engines as big as 3.5 liters, though it didn't provide acceleration times.

It did provide the single data point that the throttle response and passing power in Sport mode was better than that of a BMW Z4 3.0Si in its own Sport mode.

While we didn't do any timed tests, we'd happily take the Fit EV on virtually any type of road knowing that Sport mode was there--not something we can say about every electric car we've driven.

Honda thoughtfully provided a curving uphill on-ramp on the short, 7-mile drive route (we did several loops), which showed off the Fit EV's ability to accelerate past both slow-moving semis and aggressively-driven sport utilities with blacked-out windows and aftermarket wheels.

Honda said using Sport mode will cut range about 10 percent, while driving in Eco mode can add as much as 17 percent to the stated 82-mile range. (We think it's still not worth it, unless you're in extremis.)

With a 55-45 weight distribution (better than the standard, nose-heavy gasoline Fit) and its low-mounted battery pack, the Fit EV handles nicely and corners flat.

In head-to-head handling course comparisons with a Nissan Leaf, the electric Honda clearly came out ahead and drove more responsively.

The ride is firm, with noticeable tire noise on some surfaces,

Honda provides a "B" mode on the drive selector, which increases the brake regeneration. In standard "D" mode, the Fit EV drives like a conventional vehicle fitted with an automatic transmission.

We spent quite a lot of time in "B" mode, and can say that it's not nearly as aggressive as similar modes on other electric cars, particularly the BMW ActiveE and Tesla Roadster. It allows "one-pedal driving" some of the time, but we still found ourselves using the brakes more than we would have in one of those cars.

Using "B" mode also precludes use of the cruise control, which has been set to keep the Fit EV at constant speed even when heading downhill (some conventional cars do this as standard, but others don't).

The electric servo brake system, which uses a "pedal force simulator" to give pedal feedback, transitioned imperceptibly between regenerative and friction braking. When driven smoothly, the Fit EV uses its conventional brakes only in hard braking and below 10 mph to come to a complete stop.

Any color as long as it's blue

The 2013 Honda Fit EV comes in one color--Reflective Blue Pearl--and one trim level, which takes a top-level Fit and adds a navigation system with rear-view camera, real-time FM traffic, and interior fabric made of "bio-PET," or polyethylene terephthalate (PET) thread that's sourced from sugar cane rather than petroleum..

It also adds HondaLink EV telematics, the first limited rollout of a system that will be introduced across more Honda products in the coming years (we suspect the all-new 2013 Accord may be next).

That smartphone app allows owners to see such data as battery state of charge, and to control charging, precondition the cabin temperature while the car is still plugged in, and find local charging stations.

The Fit EV also comes with a small remote control that works at distances up to 1,000 feet. It displays much of the same information, and controls some of the same functions, as the HondaLink EV app.

The 2013 Fit EV comes with full roadside assistance for the 3-year lease period, part of what Honda said was its attempt to provide the best possible ownership experience for drivers of this new and advanced plug-in car.

Too bad about that

Overall, we liked our drive in the Honda Fit EV a lot. Unless we absolutely needed more interior room to carry five passengers, we'd likely choose it over a Nissan Leaf.

And that's the problem: Most buyers interested in electric cars won't have that option. Nissan wants to sell as many Leafs as possible, while Honda wants to sell no more than 1,100 Fit EVs.

If you're in California or Portland, a visit to a Honda dealer certified to offer electric cars may be in order.

Even if you don't lease one, you'll likely enjoy the test drive.