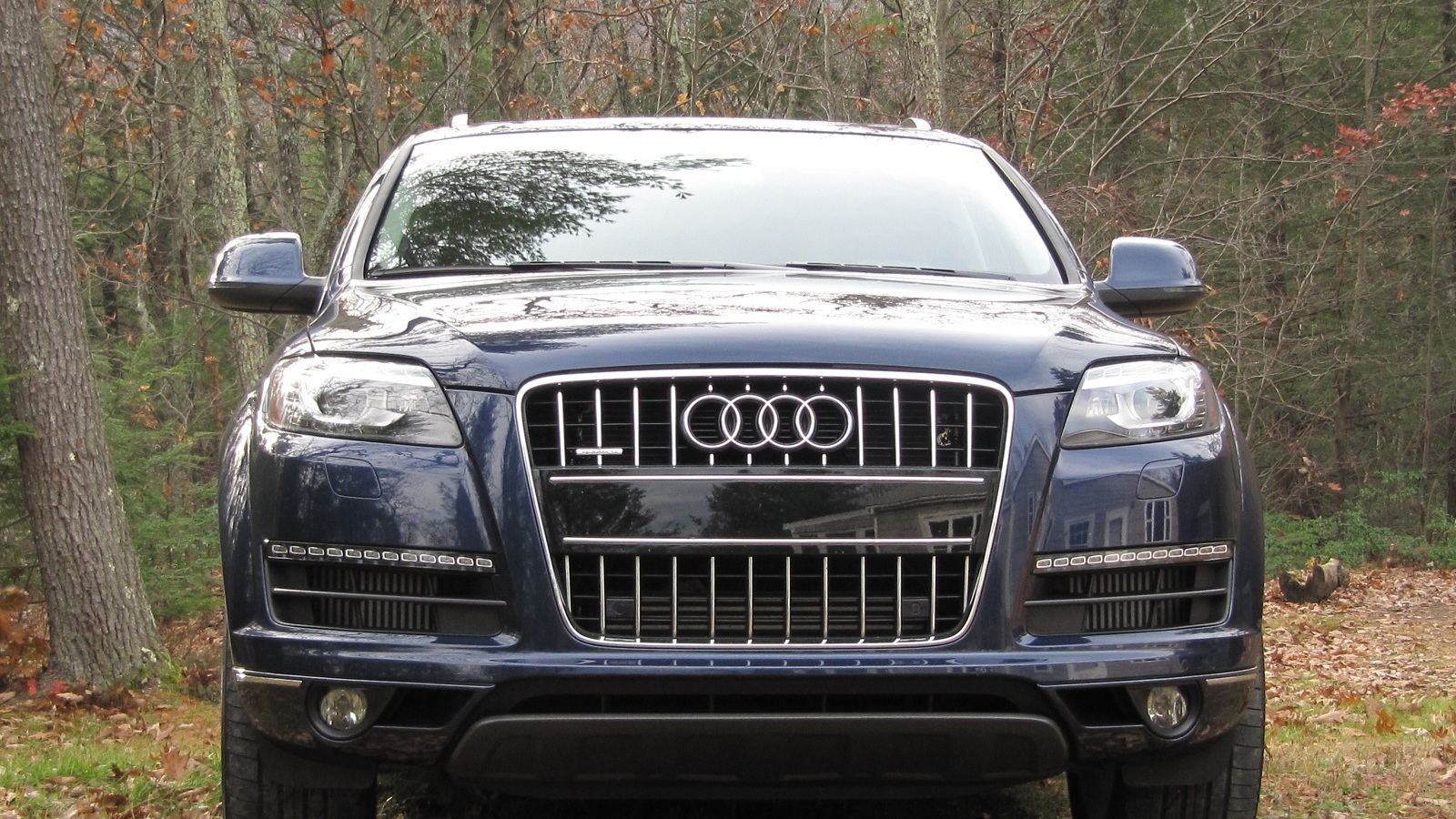 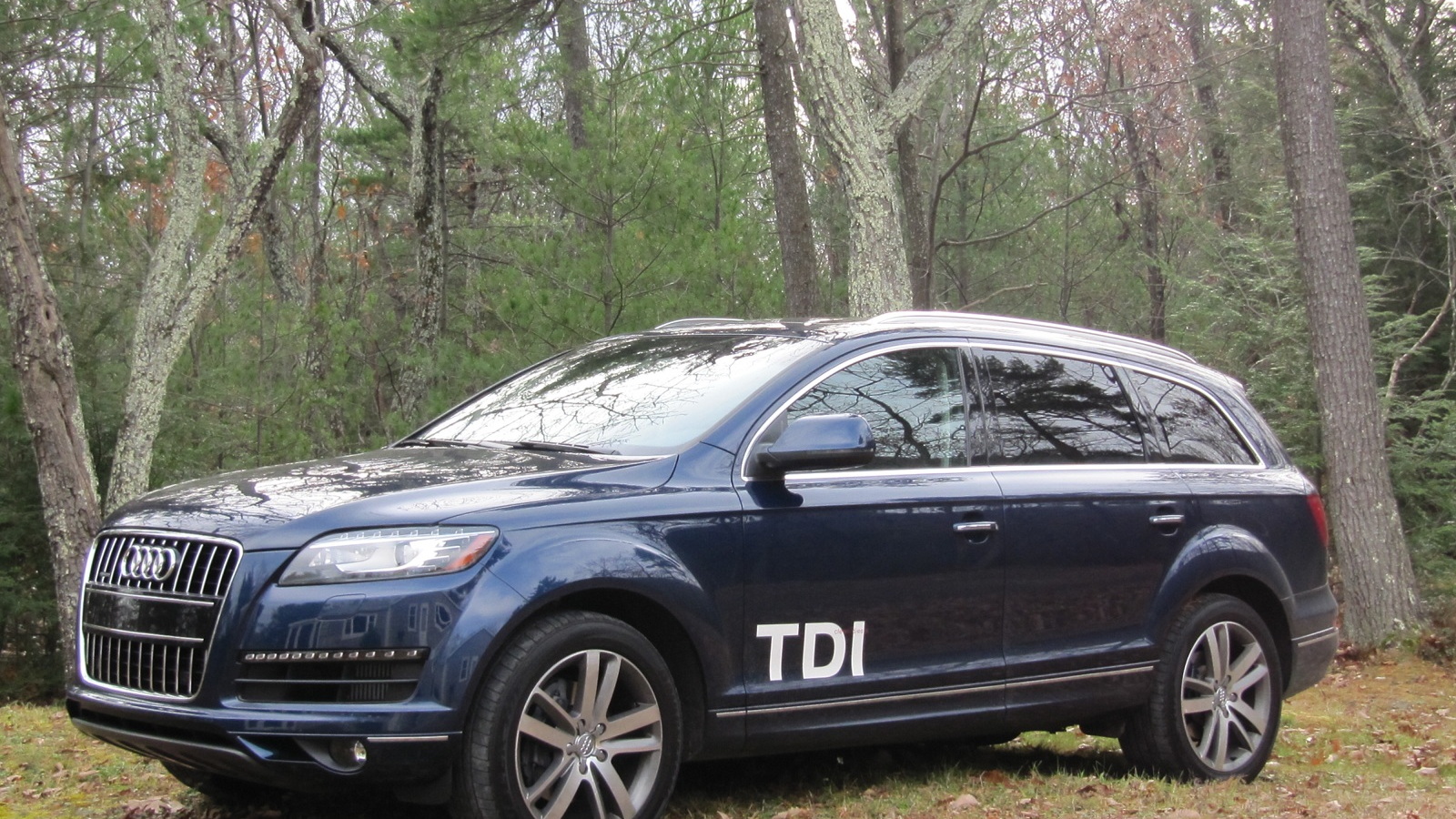 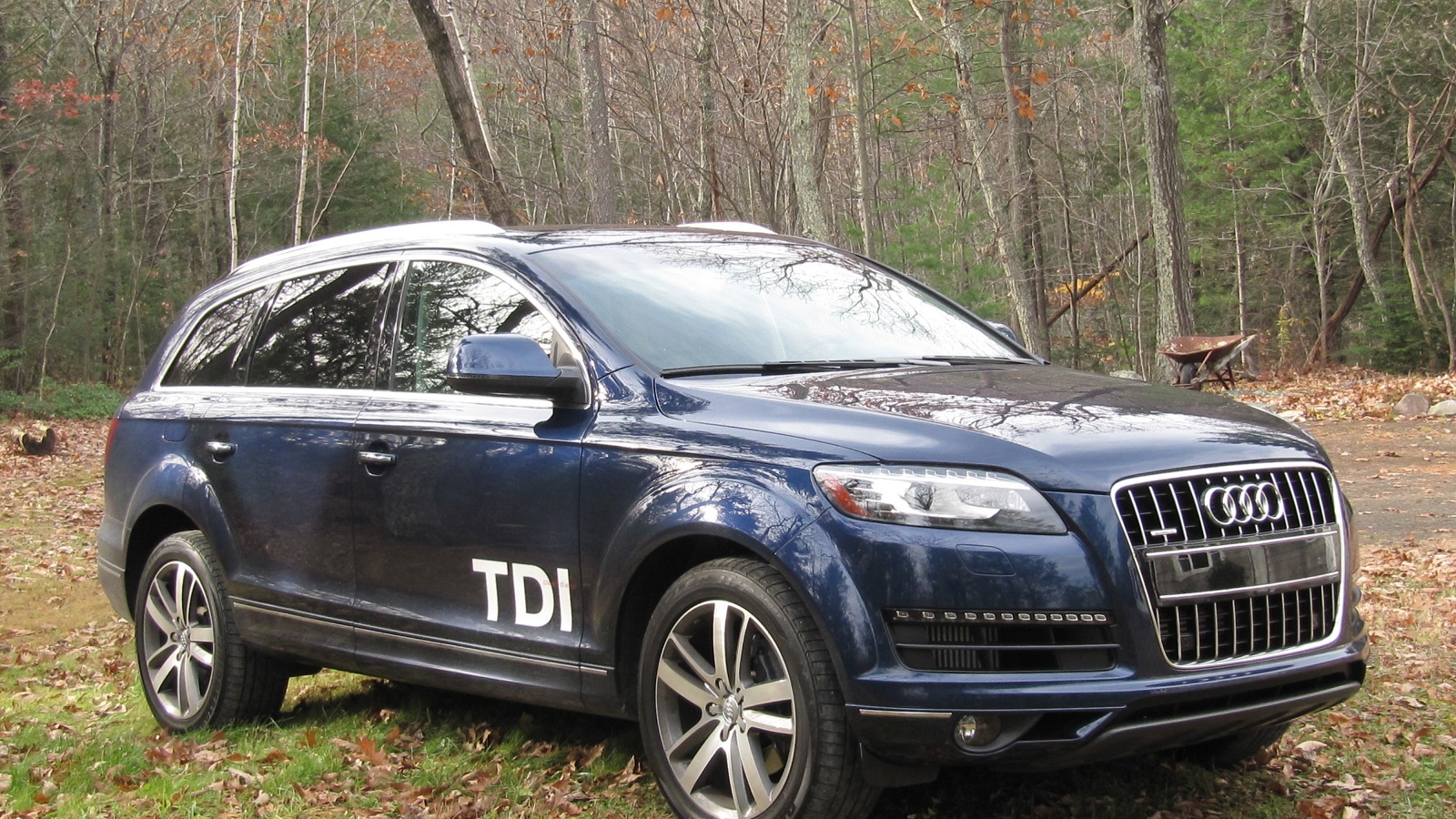 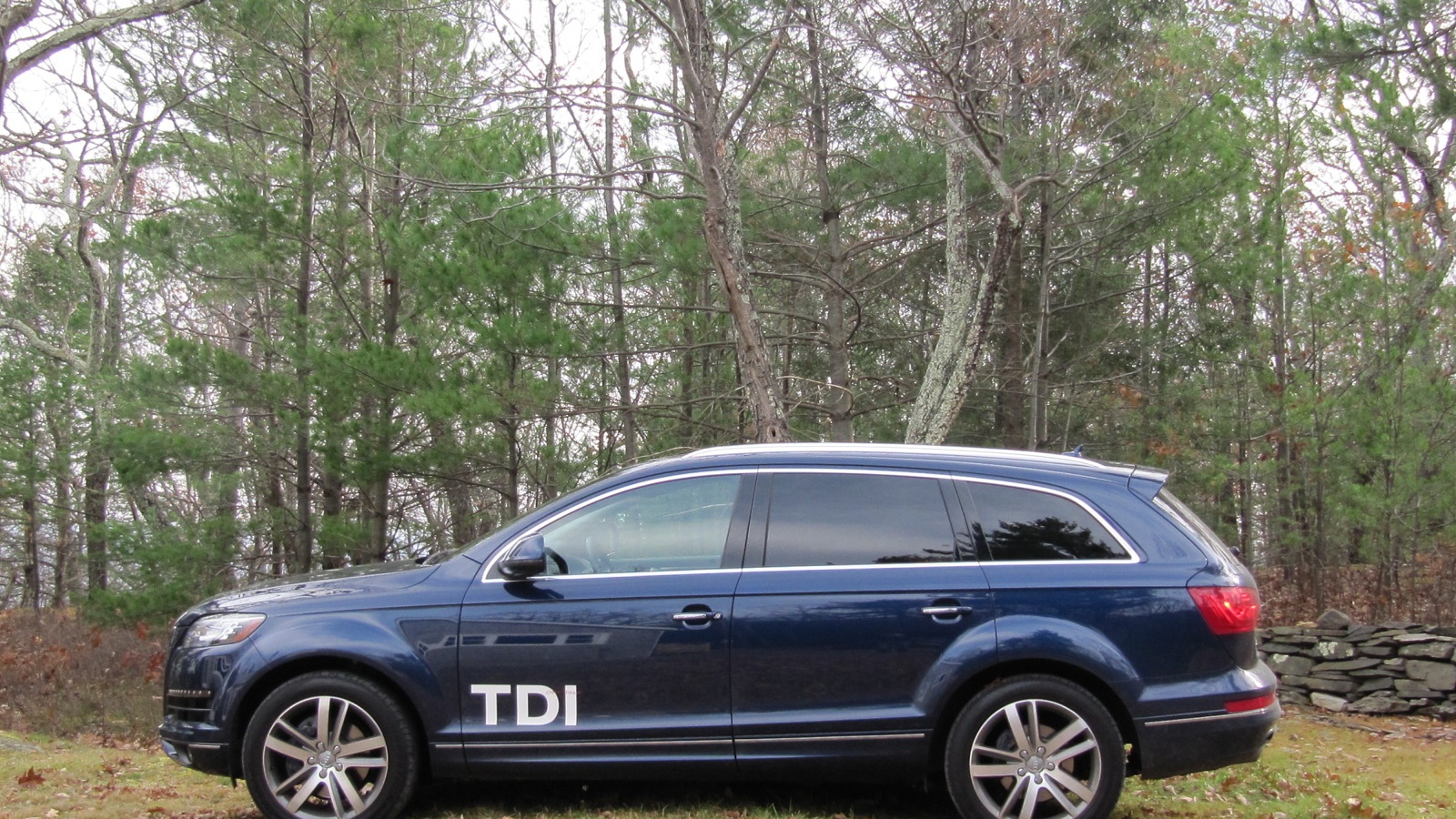 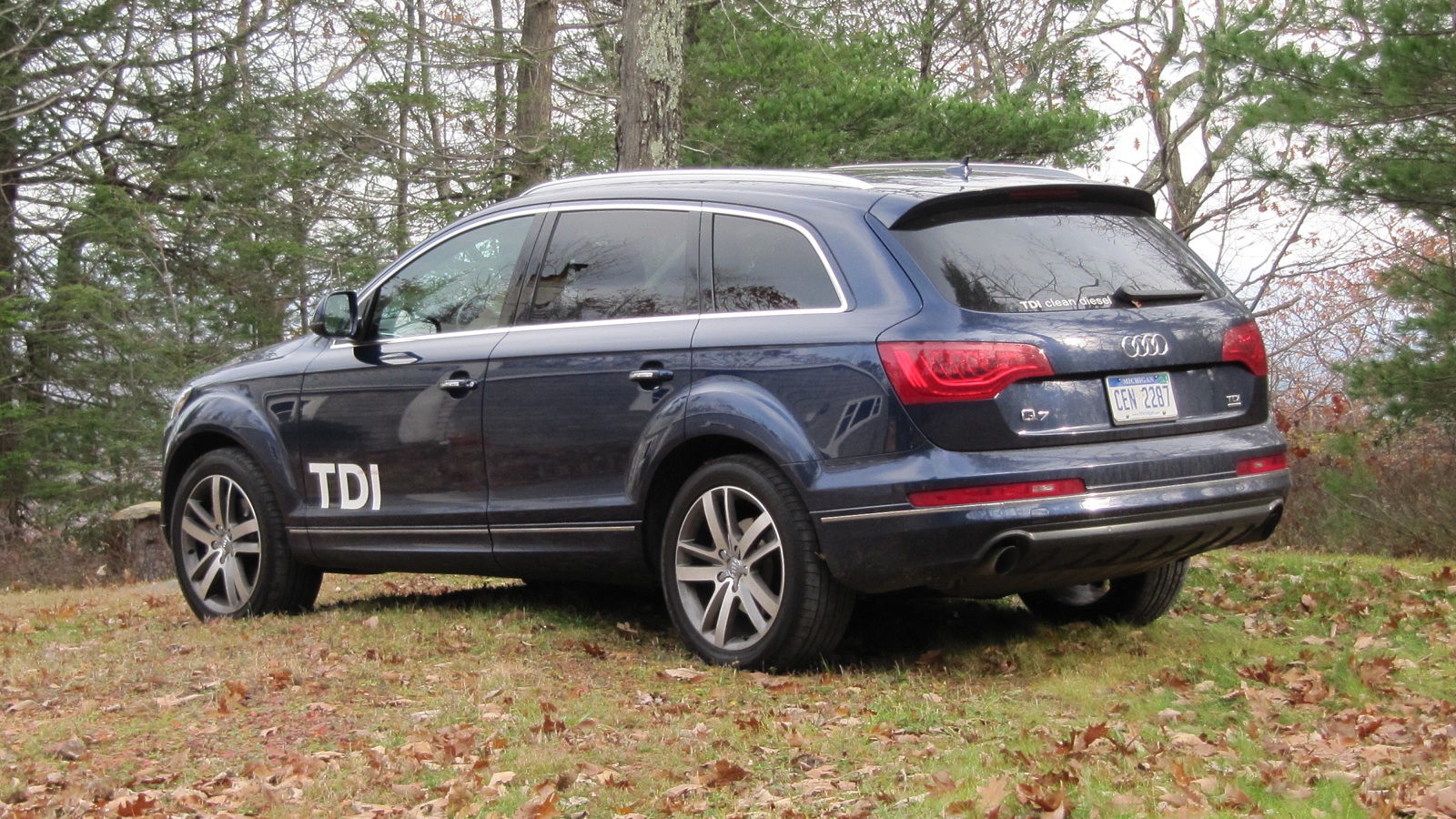 We tend to prefer smaller cars here at Green Car Reports. Since far more than half of U.S. car journeys are made by a single occupant, smaller could often suffice--and cost less, and pollute less.

But some buyers simply need larger vehicles--or at least want them--and seven-seat sport-utility vehicles are probably the top of the "larger vehicle" category.

Further stratify that list by moving from, say, a Toyota Highlander fitted with a third row into the German luxury category, and you end up at our latest quick-test vehicle, the 2011 Audi Q7 TDI clean-diesel sport-utility vehicle.

It's a hulking all-wheel drive vehicle that costs almost $73,000 and seats five adults and two somewhat-less-than-adult-sized people, and it's powered by a 225-horsepower, 3.0-liter turbodiesel V-6 mated to an eight-speed automatic transmission.

The Audi TDI diesel puts out a whopping 406 lb-ft of torque, which makes it rewarding to drive once you understand how the accelerator is mapped.

Which is to say, it does nothing for the top third of its travel, and is linear thereafter--in contrast to some modern small cars, which seem to put about two-thirds of their engine power in the top inch or so of accelerator travel.

On a 340-mile weekend test, we did better than the ratings, achieving 27.3 mpg on a route that was about two-thirds highway travel. Many diesels are believed to deliver better fuel economy than their EPA ratings.

That message may be percolating into the market. Audi says that roughly half its Q7s are sold with the diesel now--though the car is a low-volume one for them, with less than 7,500 sold during the first 10 months of the year. Of the 710 Q7s sold last month, it said, 43 percent were TDI models.

The Q7 styling is large and aggressive in other cars' rear-view mirrors, with its toothy grille causing at least a few to move over smartly as it loomed in the rear window.

Inside, like most Audis, the Q7 TDI is a comfortable place to spend long hours behind the wheel--but the technology is hardly self-explanatory. It took us a good 10 minutes to locate the toggle for the trip computer screens, a tiny unmarked rocker switch on the end of the wiper stalk.

The infotainment electronics betrayed the car's age (it was first launched in 2007, and will be replaced in the next year or two), with an iPhone jack inconveniently located in the glovebox, a pair of SD chip slots (who needs TWO?), and no USB port. (Lots of 12-Volt power outlets, though.)

Oh, and that glovebox? The button to open it sits next to the navigation screen, and we only found it because we'd hunted in vain on other Audi models, so we knew to look in, ummmm, illogical places.

On the other hand, the glovebox was cooled, perhaps to prevent expensive German chocolate from melting (it didn't seem like a very Diet Coke conveyance to us). And we never tired of watching the tiny Bang & Olufsen tweeters rise out of the corners of the dash when the car started.

Green for the category

While the Q7's roadholding was good, it suffered in comparison to the smaller and newer 2011 Porsche Cayenne S Hybrid we tested (oddly, in a very similar deep blue metallic), derived from an updated version of the same family.

The Cayenne was simply the best-handling SUV we've ever driven. It only has five seats, though, and is pricier than the Q7.

Still, the big seven-seat Audi was just too large for us to place confidently 100 percent of the time, though it never let us down or scared us behind the wheel. We were happy to return to our usual fare of mid-size and compact test cars.

Our test car carried a base price of $50,900, plus a whopping $12,000 for the Prestige package--including navigation, Bose surround sound, parking system and rear-view camera, 20-inch wheels with all-season tires, a power tilting and telescoping steering wheel, the huge panoramic sunroof, sunshades on side windows, four-zone climate control, heated and cooled front seats, and a great deal more.

In the end, the Q7 TDI delivered respectable fuel economy for such a large and heavy vehicle. It's not our kind of car, but if you need/want a luxurious seven-seat all-wheel drive conveyance, this is a greenish way to do it.