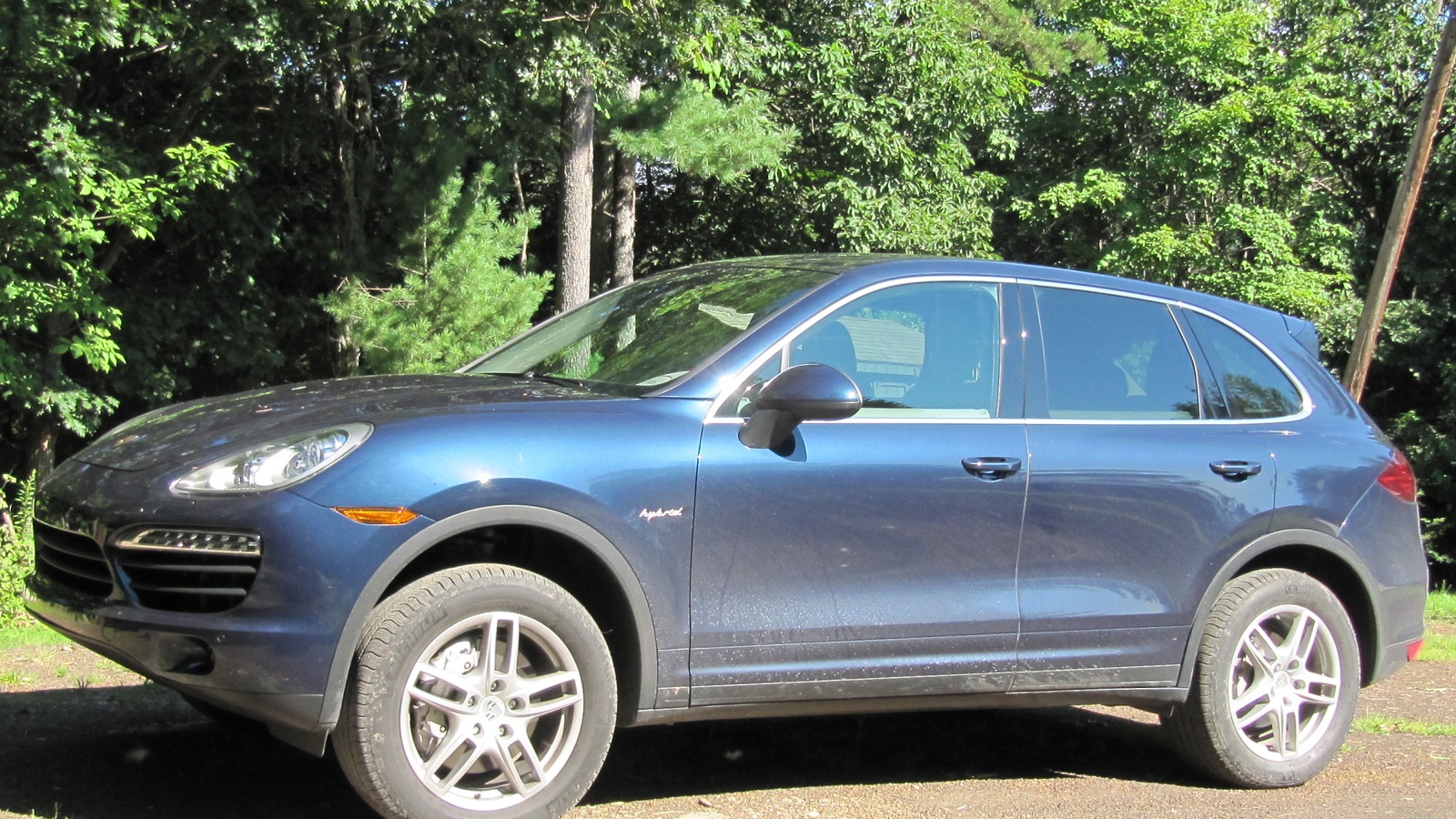 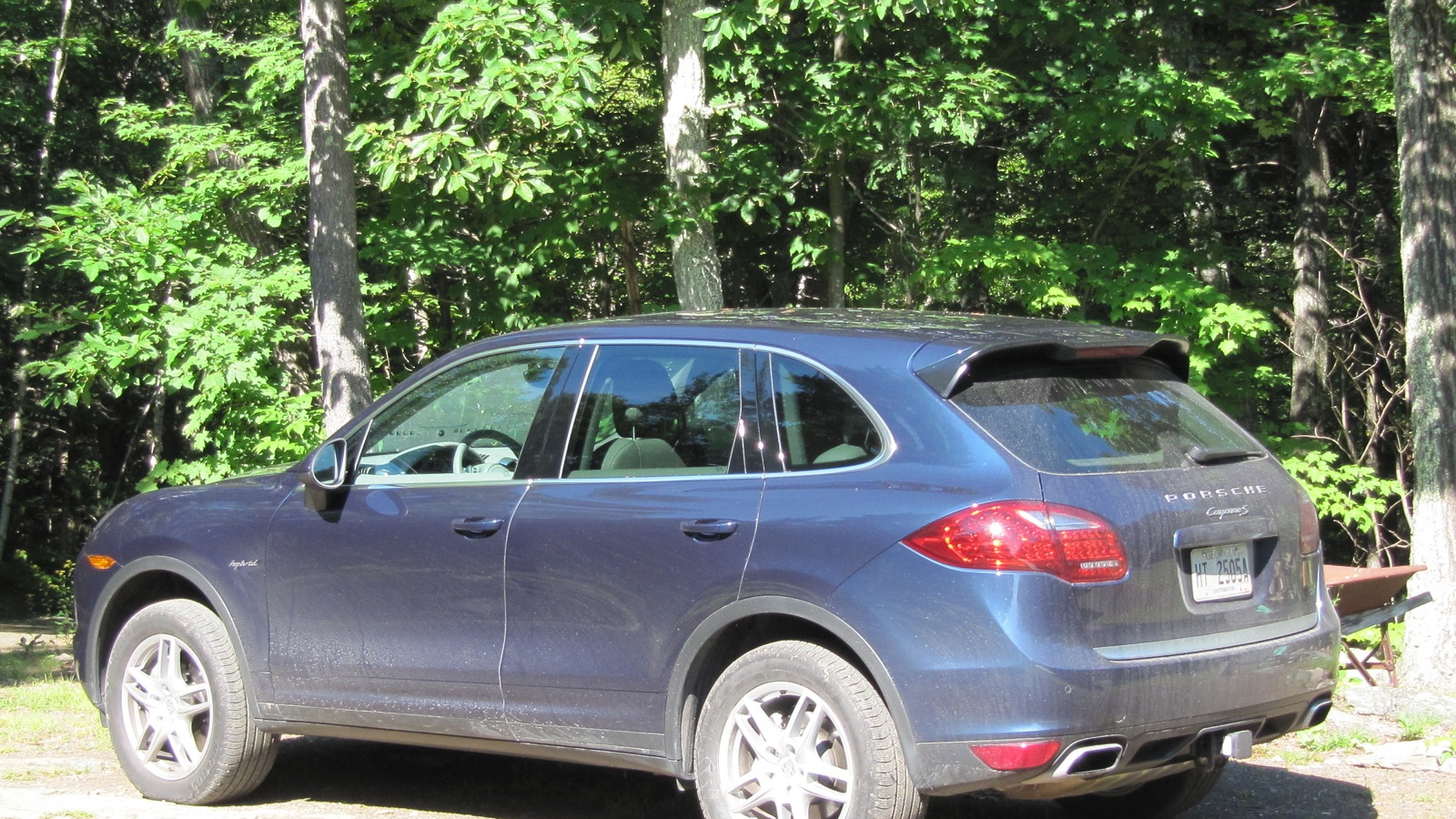 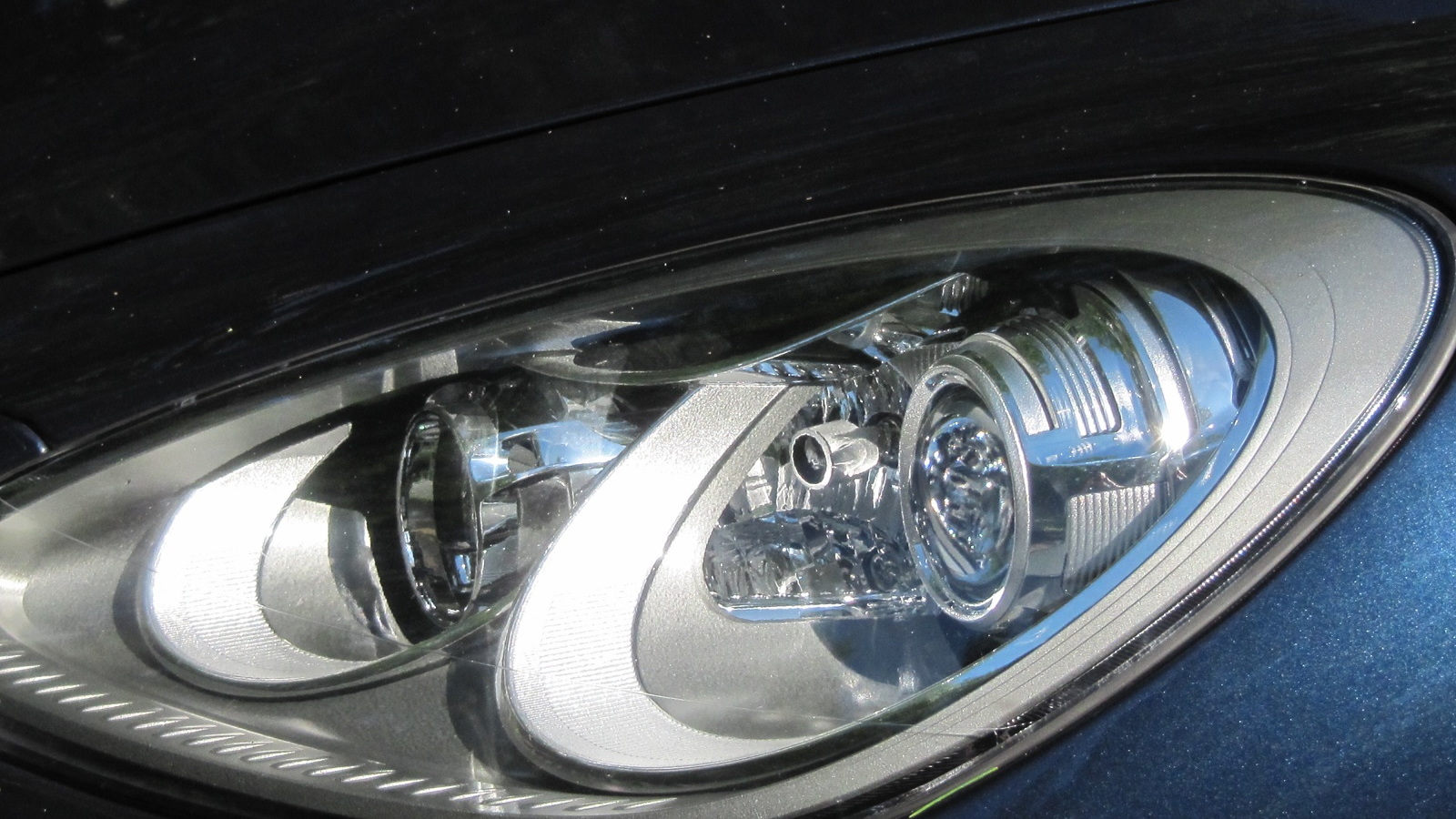 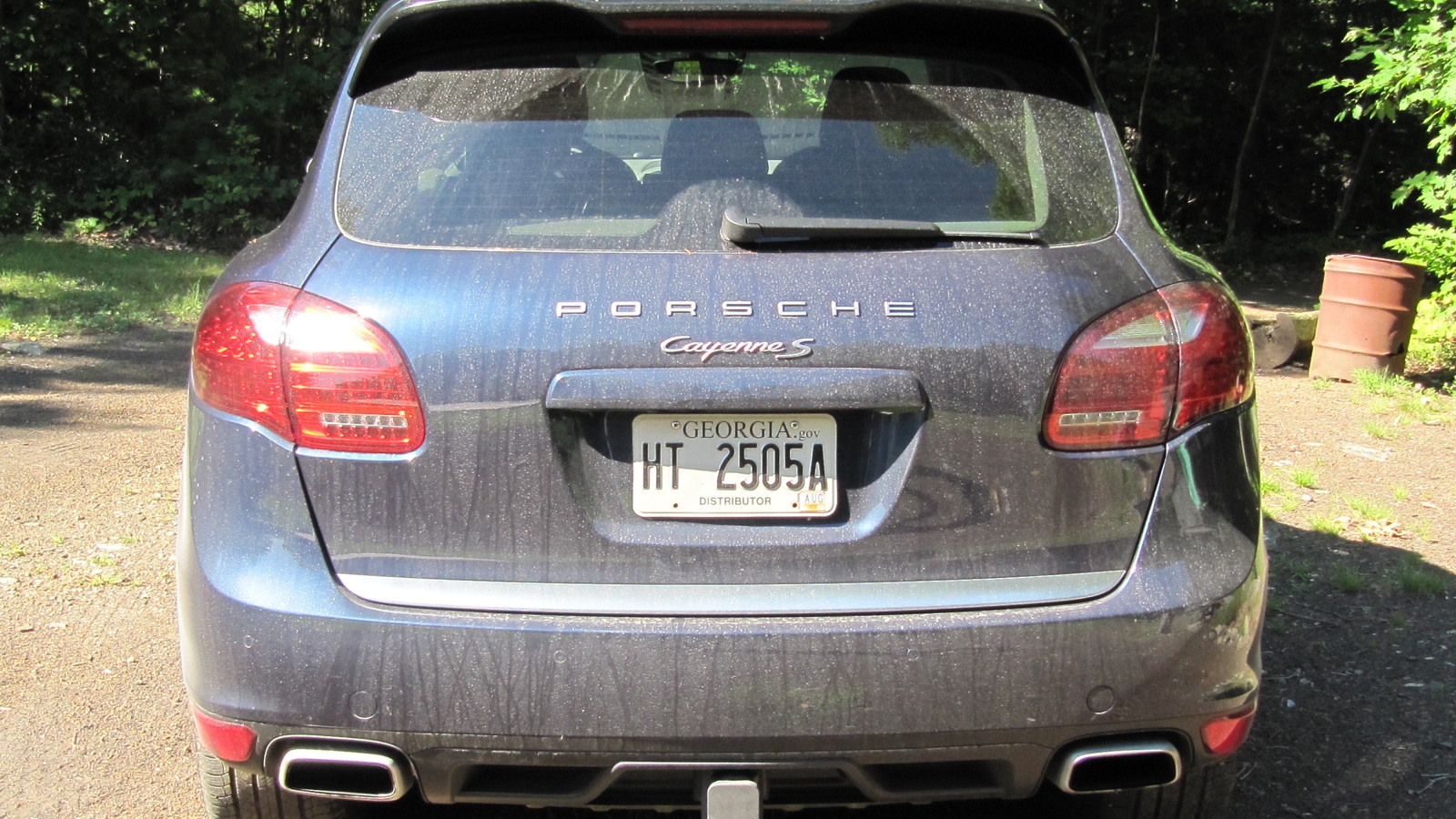 Very few people think of Porsches and trailer hitches in the same sentence. We didn't, until a recent weekend, but our Porsche had one.

It also had all-wheel-drive and ground clearance of more than 10 inches, when the suspension was raised to its maximum height to clear our rock driveway, better known as "the streambed."

We weren't testing a classic rear-engined 911 coupe, nor a canvas-roofed Boxster sports car. Instead, we were driving the highest-volume Porsche, a hulking sport-utility vehicle that pairs performance with SUV virtues like towing and high ground clearance.

In fact, we were driving the first hybrid-electric vehicle Porsche has built and sold. At least, the first one since around 1900, when young engineer Ferdinand Porsche designed the "Semper Vivus" series hybrid (recently recreated by Porsche) that led to a small run of Lohner-Porsche production hybrids a century ago.

That's an improvement on the 16 city, 23 highway, 19 combined that the base Cayenne with a 3.6-ilter V-6 and the eight-speed Tiptronic gets, and considerably better than the 15 city, 22 highway, and 17 combined delivered by the fire-breathing Cayenne Turbo with its 500-hp turbocharged V-8.

So what'd we get in the real world? Over a 619-mile trip that covered both Manhattan streets and the lovely two-lane roads of upstate New York--climbing numerous hills in the center of the state and then coasting right back down again--our Porsche hybrid gave us a startling 27.7 mpg overall.

For amusement, on one 3-mile stretch from our house all the way down the hill, we were able to keep the car entirely in electric mode once the engine switched off after warmup. That briefly boosted our mileage for that segment to 39.2 mpg.

It's not relevant to the broader test, but hey, when's the last time a Porsche has gotten almost 40 mpg under any circumstance?

We didn't drive aggressively (we'll save that for the real Porsche sports cars), but we also didn't particularly maximize mileage. In other words, the hybrid system really does help increase the gas mileage of this heavy SUV.

The 2011 Porsche Cayenne S Hybrid uses the Volkswagen Group hybrid system, as does the 2012 Volkswagen Touareg Hybrid with which the hybrid Cayenne shares much of its running gear and a basic platform.

The engine is a 333-horsepower 3.0-liter supercharged and direct-injected V-6, paired to Porsche's standard eight-speed Tiptronic automatic gearbox. Between the two is a 34-kilowatt (47-hp) electric motor with a clutch on either side.

The electric motor can power the Porsche alone, under certain circumstances; it can add torque to the engine output, improving performance without increasing fuel consumption; or it can recharge the battery pack through regenerative braking.

Unlike twin-motor systems from Toyota and Ford, however, it can't do those things simultaneously. It can only do one of the three at any given time.

Porsche has tuned the Cayenne S Hybrid to allow it to run solely on electricity--which it calls "sailing"--at speeds as high as 97 mph. The engine disengages, the motor clutches into the drivetrain, and it alone turns the rear wheels under light loads for distances of as much as 2 miles.

If there's a slight downhill grade, it can switch between powering the car and recharging the battery, and the engine will stay inoperative even longer.

This helps the hybrid system improve fuel efficiency even at high speeds, and contrasts sharply with many older hybrid designs, which use electric power only at low speeds. Porsche says the Cayenne S Hybrid will accelerate on electric power alone up to 37 mph, though we weren't able to get the car past 20 mph before the engine kicked in.

The leather interior was beautifully appointed, and the cabin and console were well laid out. As our passenger said, "Even the buttons and controls feel like $86,000"--the sticker price on our fuel-efficient Porsche truck. (We thought the piano black surfaces already felt dated, however.)

We liked the chunky aluminum roller switches on the console for the temperature, fan speed, and ride height. We were amused that the Cayenne was fitted with a genuine ashtray and cigarette lighter, something we haven't seen in a test car in several years.

And the angled grab handles were both stylish and very functional. The cabin, in fact, seemed to have grab handles all over the place, subtly underscoring the Cayenne's sport-utility cred.

The large rear seat had plenty of space for two additional passengers, with three possible if needed.

The soundproofing was exceptionally good; without looking at the tachometer, we had no sense of when the engine switched off or restarted--and we've driven a lot of hybrids in our day.

It's unusual to have a hybrid vehicle that shifts gears while it's running in all-electric mode. It worked fine, but as in most first-generation hybrids, Porsche has some more work to do to smooth the transitions between regenerative and friction braking, and the blending of the electric motor when the transmission downshifts.

The brakes in particular proved grabby and non-linear under certain conditions. Porsche and the VW Group could take some lessons from Ford, which after seven years of building hybrids has managed to improve its control software to the point where it's literally impossible to feel the transition. But it takes work. Go to it, Zuffenhausen.

The Cayenne's handling, on the other hand, was pretty much impeccable in general use, as we'd expect from any Porsche. This is not only the best-handling SUV we've had, but the most fun to drive. Its grip on the road was prodigious, far beyond the needs of the affluent suburban families who are its likely purchasers.

But the combination of that handling and the ability to raise the Cayenne to give a ground clearance of 10.6 inches--our driveway, again--really won us over.

We had a handful of minor grumbles: The Power gauge showing when electric power was being used or regenerated was small, almost hidden in the left-most gauge. The cupholders were far too shallow, meaning a 20-ounce water bottle actually fell out during hard cornering.

We did finally figure out how to turn off the front-end proximity alert, so that pedestrians in crosswalks didn't constantly alarm our Cayenne by making it think it was about to run into something that was too close. But it took 10 minutes of reading, guessing, and figuring out what that function would be listed under. (Answer: "parking". Riiiiiiiiiiiiiiight.)

Most annoying, the cruise control lever was on the left of the steering wheel, meaning we constantly mistook it for the turn-signal indicator. Yes, it's something we could train ourselves out of, but it seems odd. Why not put it on the right, since drivers use indicators far more often than the wiper stalk on the right, so there's less chance of confusion?

Our 2011 Porsche Cayenne S Hybrid came with a base price of $67,700. But in typical Porsche fashion, the options racked up quickly, jackrabbiting the total sticker to a breathtaking $86,510 (including a mandatory $975 destination charge).

Those options included $790 for the lovely Dark Blue Metallic paint (which we managed to keep dirty pretty much all weekend), the pleasant Platinum Gray leather interior ($3,665), another $1,560 for 19-inch Cayenne Turbo alloy wheels, and $1,335 for 14-way power seats with memory (we'll take their word on the 14 ways, but we found them very comfortable).

Then there was a $4,520 Convenience Package, the height-adjustable air suspension we relied on for the driveway ($3,980), front and rear parking assist ($1,095), $250 for the heated multifunction leather-clad steering wheel, and finally $650 for that trailer hitch and associated hardware.

In the end, we really liked the Porsche Cayenne S Hybrid, and we hadn't expected to. We're not fans of big SUVs, preferring station wagons that tend to be more economical and often larger inside.

But the hybrid Porsche won us over. We'd gladly take it back, get it dirty all over again, and if we needed a five-seat SUV--and happened to have a spare $90,000 lying around--we'd seriously consider it.

Hey, 28 mpg from a big SUV and all that handling fun? Not bad.

Porsche provided this test vehicle to High Gear Media to enable us to bring you this first-person drive report.