The venerable Toyota Prius has been around for over a decade now, first as an awkward but fuel-efficient sedan, then a geeky hatchback and soon a platform in its own right.

But while Toyota is now putting the Hybrid Synergy Drive technology from the Prius into a whole range of vehicles from tiny city hatchbacks to full-sized luxury SUVs, there are some things that the Toyota Prius is not meant to be.

If you dare, here are five increasingly bizarre things we’ve seen the humble Toyota Prius turned into: The convertible Prius, the Prius limousine, the "Pimus", the Prius Pickup and the Morris Minus.

Read, enjoy and see what terrible travesties can befall someone who can weld. Just don’t copy them, okay?

Have you ever wondered why the Toyota Prius has its distinctive shape?

In a word, aerodynamics. The smooth lines help air flow over the car easily, reducing drag and increasing fuel economy.

But while replacing the roof with a bespoke, electrically folding ragtop might be nice for those days cruising down the PCH, it certainly won’t help your fuel economy. 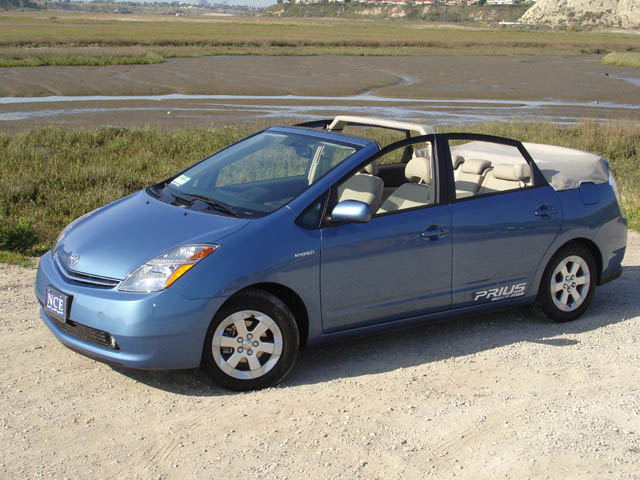 And we can’t imagine it was cheap either.

Which is why we have to say that this rather smartly done Toyota Prius convertible by California-based Newport Convertible Engineering --  which will apparently turn anything from a Cadillac Escalade through to a Range Rover into a drop-top -- earns a place on our list.

Much like the Prius limousine below, the convertible Prius is a concept we’ve seen time and time again, with varying degrees of success.

You’re an eco-minded driver with a soft spot for the 2004-9 Prius, but your family just won’t fit in a five-seat hatchback.  What do you do?

Most folks would accept that the high-mpg Prius might not be the best fit and buy a larger minivan or SUV instead, but one enterprising enthusiast from Quebec, Canada, took two Prii and turned them into a six-door, eight-seat Prius limousine. 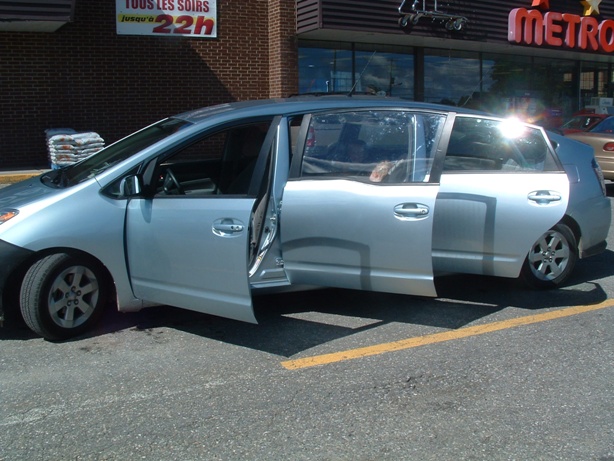 Surprisingly, the Prius limousine cost very little to build as it was built from two wrecked Prii. The total build cost was a mere $10,000 - about the same as a five year old used Prius - and took its creator more than 200 hours of fabrication to finish.

Economy? its owner reported in 2007 that his six-door creation got between 43 and 50 mpg after the massive surgery.

While we’re a site devoted to fuel economy and green transport, we still appreciate a good custom car, be it a vintage hot-rod or a tricked-out SUV.

But some cars just don’t feel right when they’ve been completely rebuilt into a bass-pumping, light-flashing disco-on-wheels.

Which is why we’ve put this particular Prius into our list.

Created by the crazy Classe’s Garage in Sweden, the fully-rebuilt Prius has been transformed from a eco-minded five-door hatchback into a two door coupe, complete with inverted Koenigsegg-style doors, 20 inch rims, and of course, a louder exhaust.

Nearly everything on the car is custom-built, from its dashboard and racing seats through to its 4,400 watt stereo system and took eight weeks to build at a staggering cost of $184,275.

Naturally, we’re sure its fuel economy isn’t quite what it used to be.

Keep reading on for our final two weird Prius creations, including a Prius pickup and a Prius-powered 1960 vintage car. 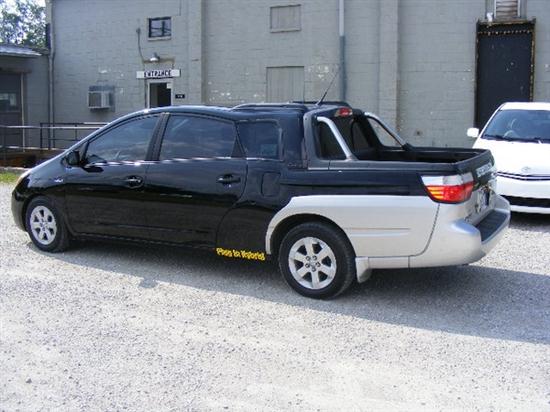 The Toyota Prius is a fuel-efficient family hatchback. It is not a utility truck.

Believe it or not though, there are rather a lot of people who seem to disagree, from commercially-available, professional looking Prius Tote through to backyard butchery and one creation which is more an art form than it is a vehicle.

We'll start off by dealing with the people  who took this sorry looking Prius -- presumably a rollover survivor -- and turned it into this two-seat pickup truck.

What we find particularly shocking about the Prius Tote is that the rear doors appear to still be in place - and at least technically operational, rather than welded up for rigidity.

The rear load-bay? That appears to be mainly constructed from some thick polyurethane pond liner with a wooden frame holding it all together.

As for the tail-lights? We’re stumped which car these once belonged to, but they’ve been tack-welded on in place of the rear tailgate, next to what looks like some aircraft-style riveting.

What influenced this badly-built travesty of Japanese decent? We’re not sure, but perhaps it was the Prius Baja Plug-in Hybrid (in photo above) created by Indiana-based Prius salvage specialists AutobeYours.

With only the kind of looks a mother could love, this freakish creation combines a rear-ended Prius with a Subaru Baja pickup truck to create one of the only cars we’ve wanted to gouge our eyes out after seeing.

The Pruck, as it was affectionately named by its creator, is apparently alive and well somewhere, although we’d advice persons of a nervous disposition to steer clear if they see it on the local freeway.

Meet the Morris Minus, or should that be the Toyota Prior?

Forgive us for not being able to give this Frankensteinian creation a name, but we think when we’ve explained what it is you’ll understand.

Outwardly, the Morris Minus loosely resembles a vintage 1960 Morris Minor Woodie, a car that at least two members of our editorial team have a soft spot for.

But instead of being powered by a small, surprisingly economical 1 liter British engine which was designed shortly after World War II, the Morris Minus is powered by the 1.5 liter hybrid drivetrain found in the 2001-2003 Toyota Prius.

That’s because the Morris Minus is a Prius. Or at least, the chassis of a first generation Prius covered with the body panels of a 51 year-old car.

In theory, it should work, but given that the donor Prius is a good deal wider than the original British car it has some...err..issues.

The car isn’t finished yet, but the video below should give you some idea of how it looked earlier this year, and it wasn’t pretty.

We suspect that Alec Issigonis (or Sir Alexander Arnold Constantine Issigonis, CBE, FRS, to give him his full and proper name and titles)--the Greek-born designer who created both the Morris Minor and the original 1959 Mini--might have something to say about further changes to the dimensions of the car he widened by 4 inches shortly before it was due to enter production.

Have we missed out any other travesties of automotive tinkering? Do know of a Toyota Prius which isn’t quite what it used to be, or doesn’t look anything like it did when it rolled off the production line?