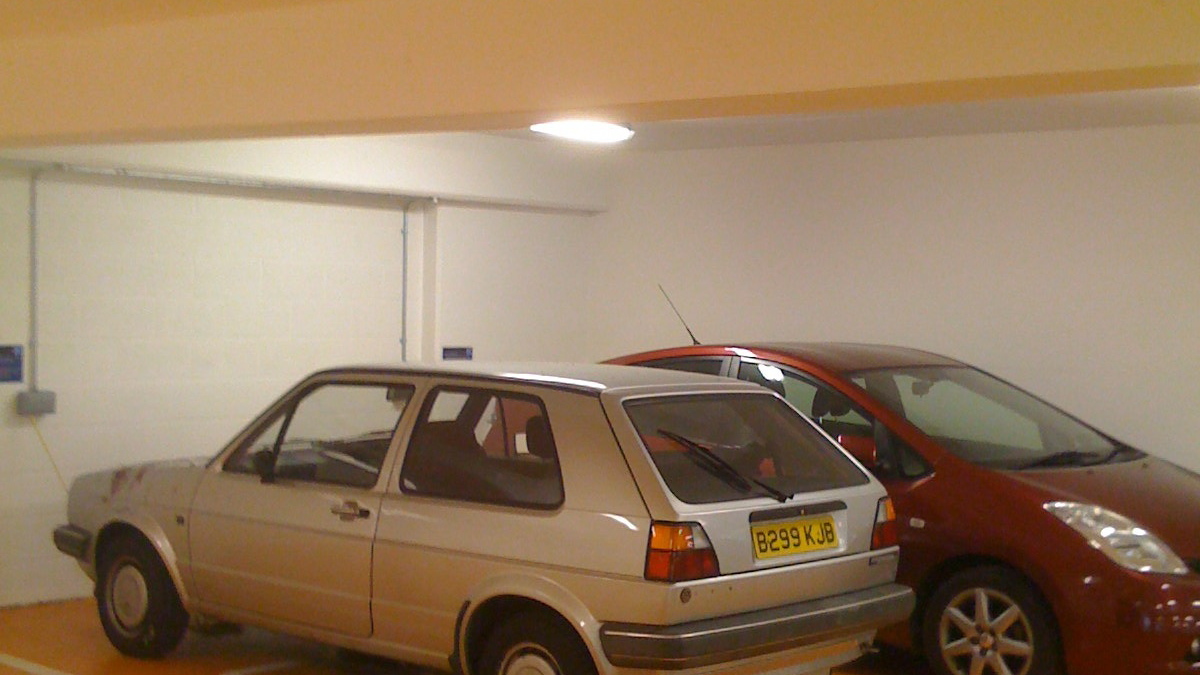 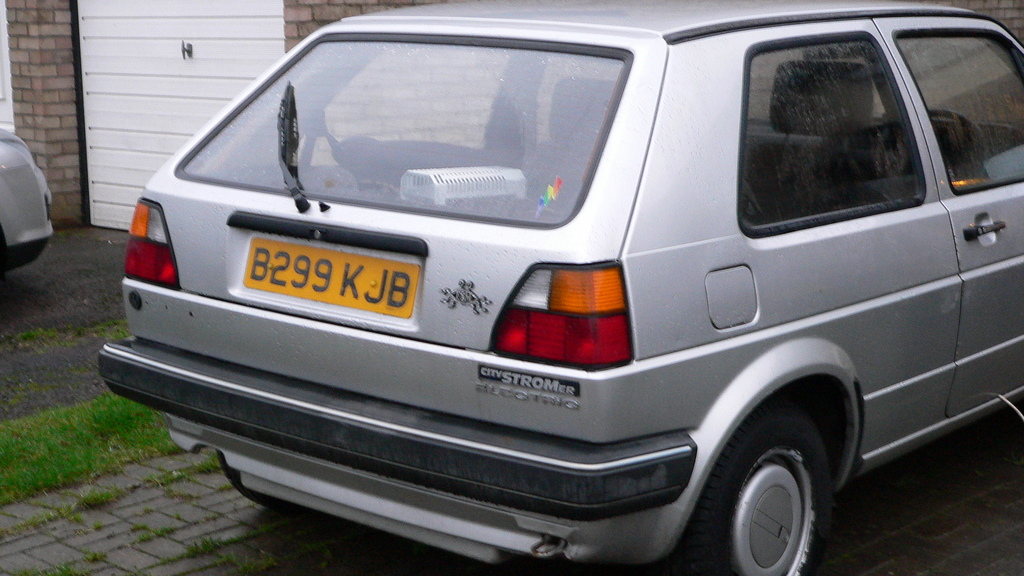 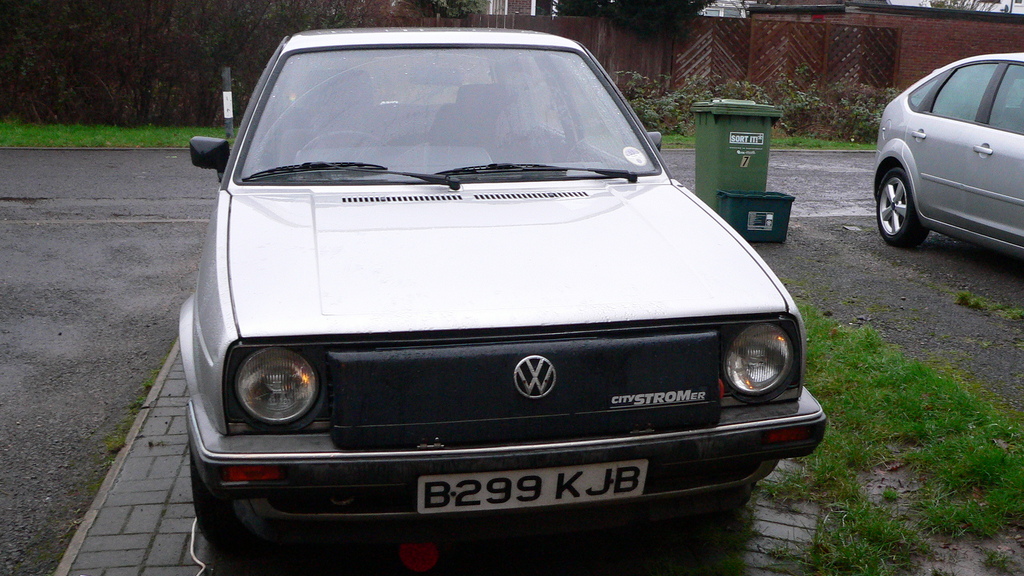 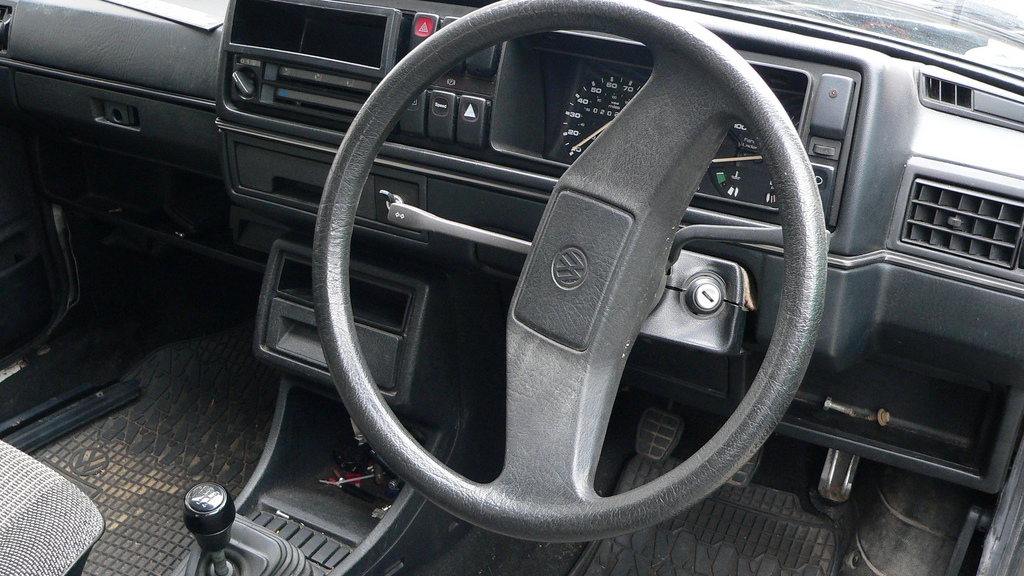 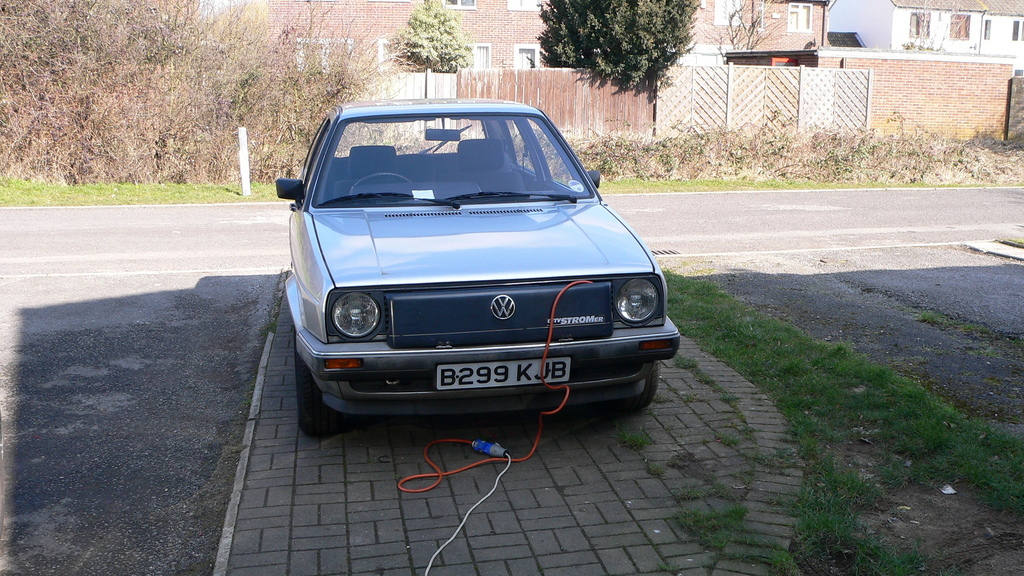 When I met last month with Volkswagen to ride inside a prototype 2012 Golf Blue e-motion, I was eager to experience this all-electric version of its popular 2011 Golf hatchback. It will go into production as a 2013 model.

But I also knew something the VW public relations corps didn't: the location of an electric car that VW had built some 25 years earlier--which they assumed had been lost forever.

A Relic From the Past

In fact, Volkswagen has experimented with electric cars since the 1970s, when the Volkswagen Golf (Rabbit) platform was first produced.

Starting with the Mark I Golf, VW engineers replaced the gasoline engine with an all-electric drivetrain. Built in extremely limited numbers, the car gave rise to the Mark II Golf CityStromer.

No, not a typo: "Stromer" comes from the German word "Strom", or "Current." Although in the tradition of poorly chosen names for EVs, some German speakers have told me that "Stromer" can also mean "Hobo".

Only a hundred or so left-hand-drive and just two-right-hand drive Mark II examples were made. Through nothing more than serendipity and a few contacts, early last year I found myself the owner of one of the two RHD examples.

Painted a bland shade of gray on top of the original white body, these two cars were specially ordered for Southern Electric, a U.K. utility company. They remained in the company’s possession until they were sold to private buyers in the mid 1990s.

The specifications of the Mark II CityStromer are hardly anything to write home about. Instead of the high-voltage systems used in today’s electric cars, VW used 96 Volts of heavy lead-acid gel batteries.

But the CityStromer was never intended to be a fast car. It was designed to be an experimental city car.

By the time I bought it in 2009, the price had dropped a lot--and the car had lost a lot of its original powertrain. While it retained its original 18.5-kilowatt motor, the power electronics had been replaced with more modern equivalents.

Still, it was my daily driver, and friends of the family named the car "Tigger". It became our errand-running car and even functioned as my wedding transport. With modified power electronics, the car was faster, capable of reaching 70 mph with more acceptable acceleration.

The higher power put more strain on the electric motor, though, eventually resulting in a failure. We made one repair of $1000, and then the motor blew again. I parked the car in the driveway, and its future looked bleak.

And there the car stayed, because the expensive repair bill was just beyond my budget. Despite the 20,000 miles since new and the rust-free bodywork, the car would have to wait for a day when I could afford to restore it.

Or so I thought.

A New Lease of Life

Enter Volkswagen. On the cusp of building the 2012 Golf Blue-e-motion electric car, VW executives had talked about finding an original MK II CityStromer to restore.

“A few months ago we had talked of trying to acquire one of the Golf CityStromers that had come to the UK, but did not think we would find a right-hand-drive example. It felt like fate when we met the owner of just such an example...We intend to keep the CityStromer on our cherished vehicle fleet, as an example of a previous Volkswagen electric production car. Few people are aware that this model was once available”

After some discussion, I agreed to sell the car to Volkswagen. It made sense: I could not fix the car, and they wanted just that car for their collection.

From its cold, unprotected driveway, the car is now in a secure, dry place where it will be restored to its former glory with help from the original team that designed and built it 25 years ago.

Of course, I’ll be test-driving my former car when it is restored to factory condition, as well as the 2012 Blue-e-motion. I look forward to seeing just how different the two electric Golfs really are.