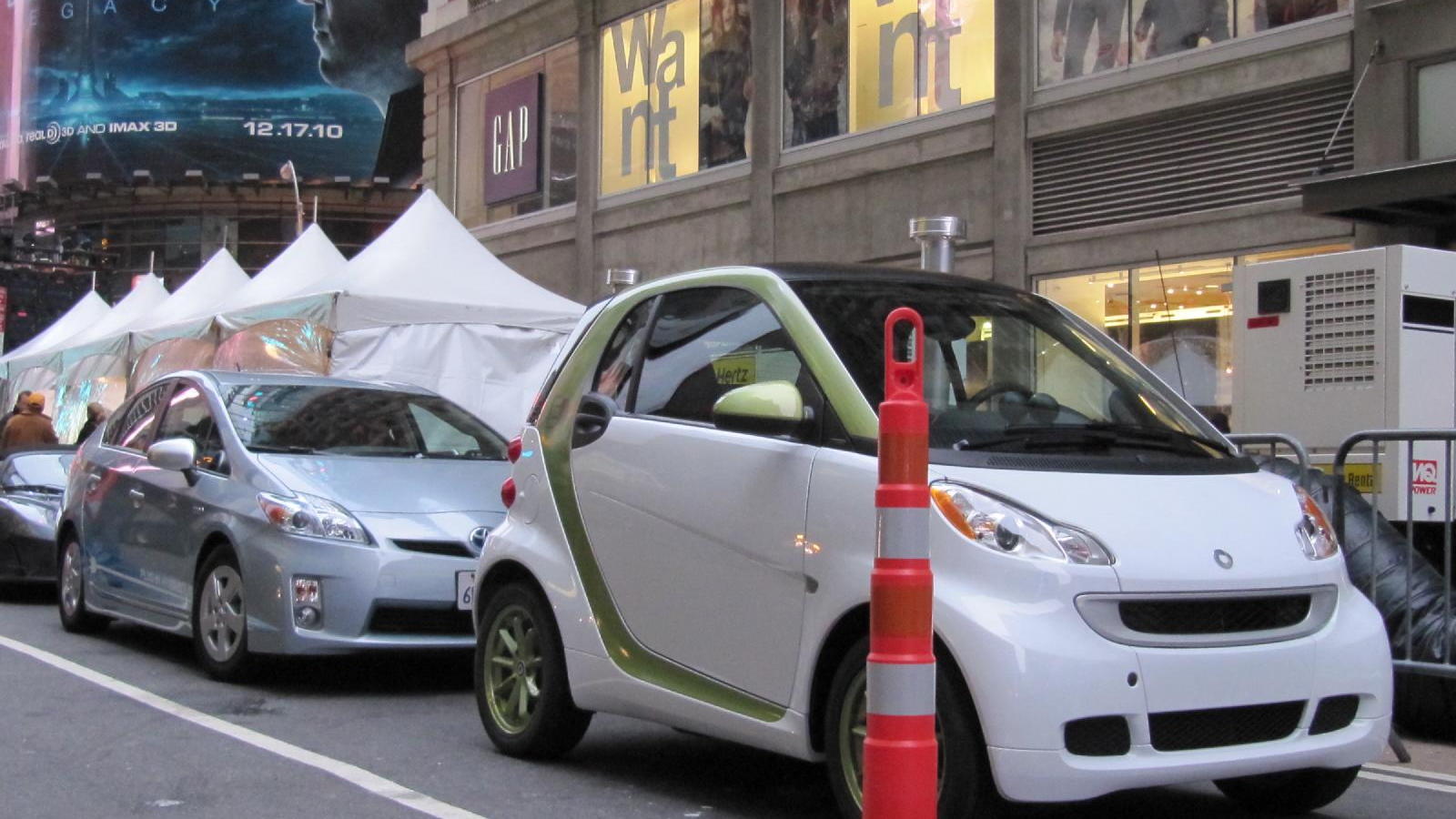 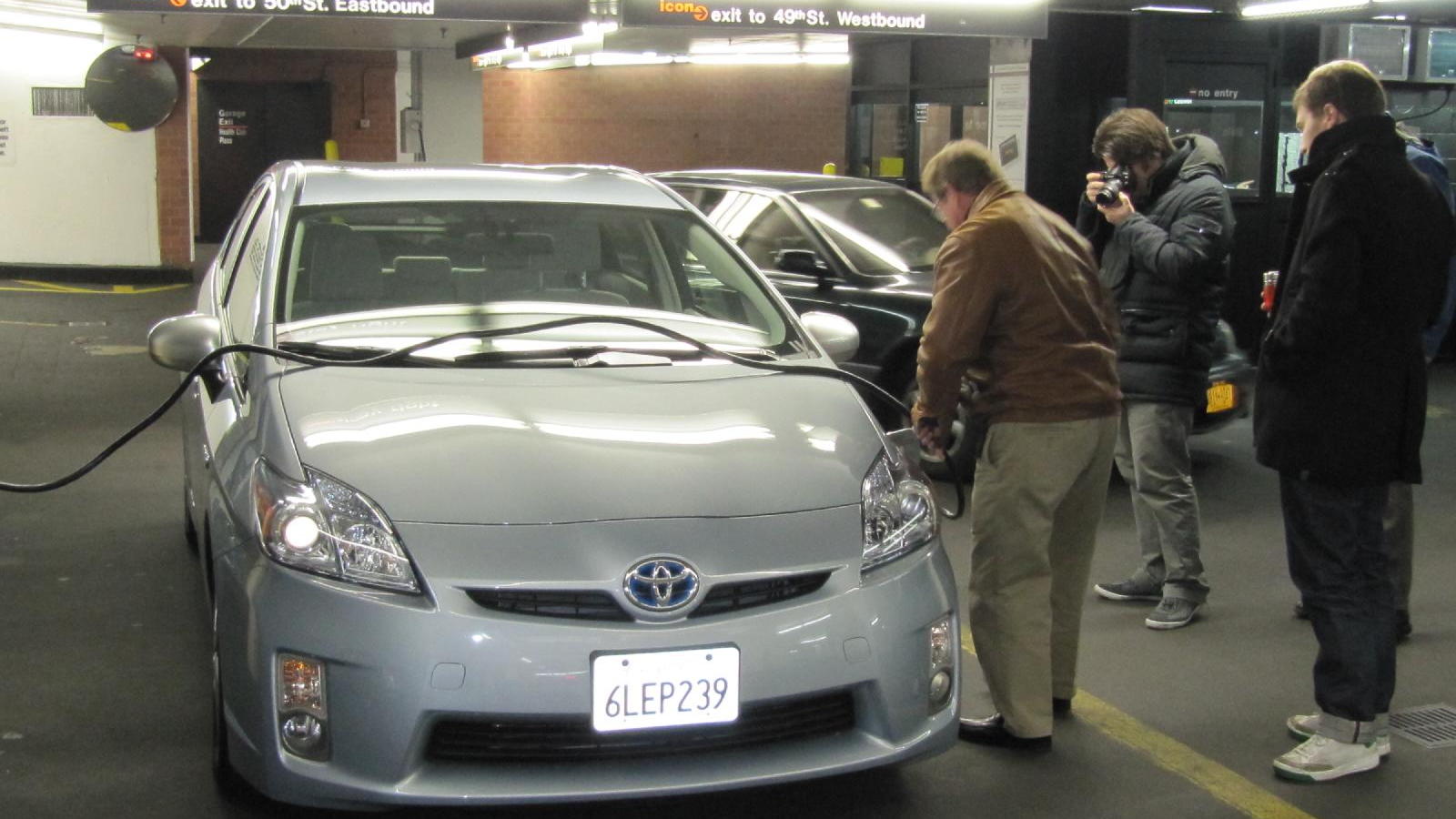 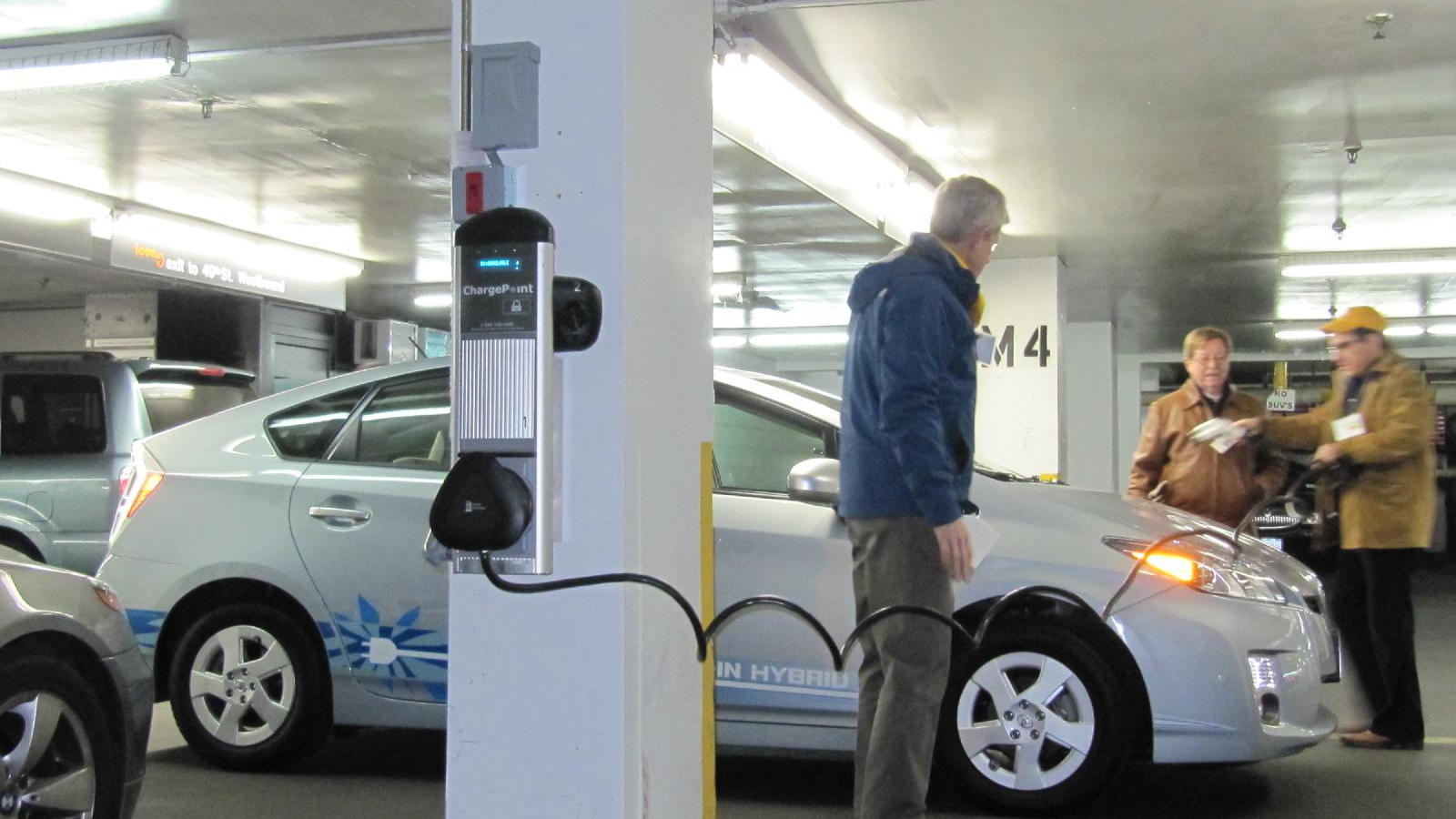 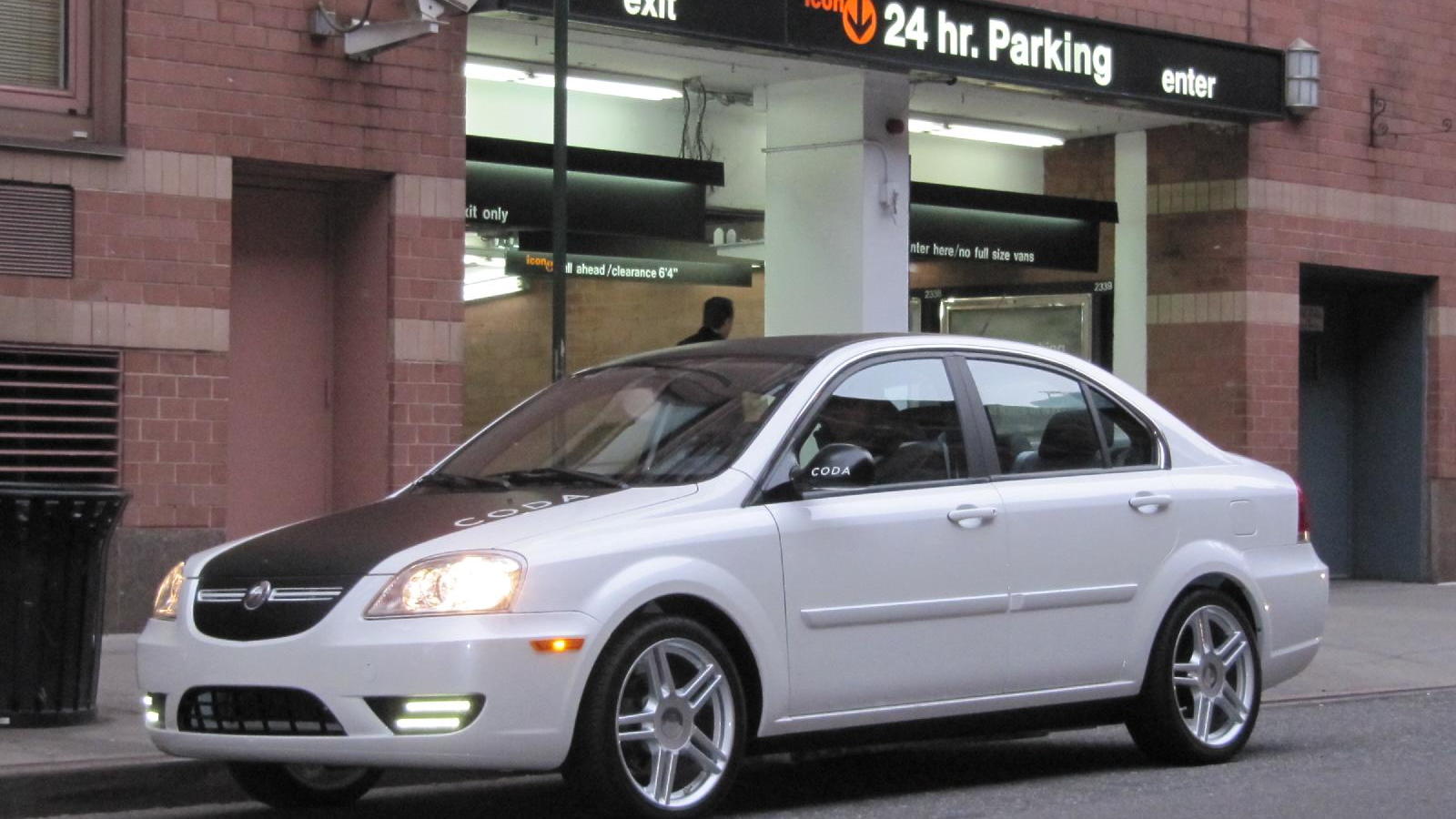 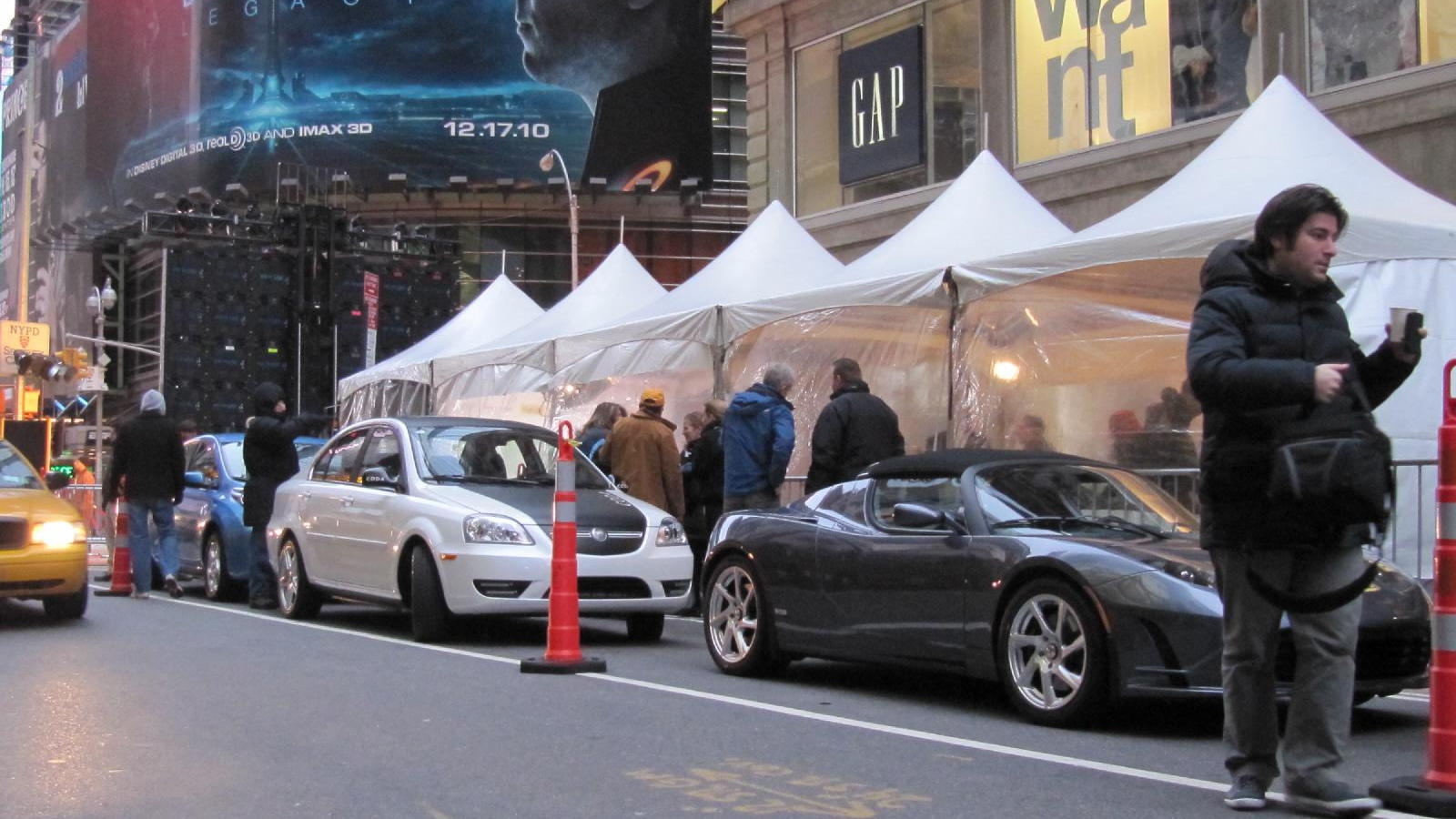 As it gears up to offer electric cars in selected rental fleets across the country, Hertz has dribbled out details of how its Global EV program will actually work.

Today we learn that New York City will be the first region to receive the electric and plug-in hybrid rental cars, with rentals to start in Manhattan next Wednesday, December 15. San Francisco and Washington, DC, will follow shortly, with other regions to be added during 2011.

At a launch event just south of Times Square in Manhattan this morning, Hertz officials and automaker representatives huddled to stay warm in the biting wind (and a few snow flakes) while journalists took brief test drives or rode in a variety of plug-in vehicles.

Hertz also announced a partnership with Penske Automotive, which distributes the Smart ForTwo minicar along with an electric version. Under the partnership, Hertz will add the Smart Electric Drive to a fleet that also includes the 2011 Nissan Leaf, 2010 Toyota Prius Plug-In Hybrid prototypes, and sometime next year, the 2011 Coda Sedan.

The company has also ordered vehicles from General Motors (the 2011 Chevrolet Volt) and Mitsubishi (the 2012 "i" electric minicar), with additional models likely to be added as they roll out over the coming years.

All rentals will be through the company's Connect by Hertz car sharing operation, which competes with Zipcar and other local and national services. Membership in the service is required to rent, but Hertz is offering a year's free membership (normally $50) to drivers who sign up via a new website, HertzEV.com, by December 25.

Who might rent electric and plug-in hybrid cars through the Connect program? Hertz names three groups--"urban drivers, university students, travelers and corporations"--who are now frequent users of car-sharing services, and likely to use them for brief journeys rather than extended road trips.

The company has added functionality specific to the needs of plug-in cars to its NeverLost GPS navigation and tracking system. Makers of electric chargers who partner with Hertz, for example, can have their chargers listed in the system so that electric-car drivers can be directed to them for charging if needed.

To tie into the Hertz system, though, the charger operators must provide real-time usage information to Hertz so that, for example, the system can know what kind of car is plugged in and how long remains before it will be finished charging.

Part of this morning's media launch was to visit an Icon parking garage on West 49th Street, to view its newly installed Coulomb charging station, one of those that will be part of the Hertz network.

The company has high ambitions for its new rental venture. "Hertz Global EV will be the first company," it says, "to provide a range of all-electric and plug-in hybrid vehicles and charging stations on a car sharing and rental basis at global scale."

Once launched in the U.S., the program will also be rolled out in other countries over the next 18 months. Hertz first announced that it would rent the 2011 Nissan Leaf and other electric cars last February, and released the early details of the program in September.