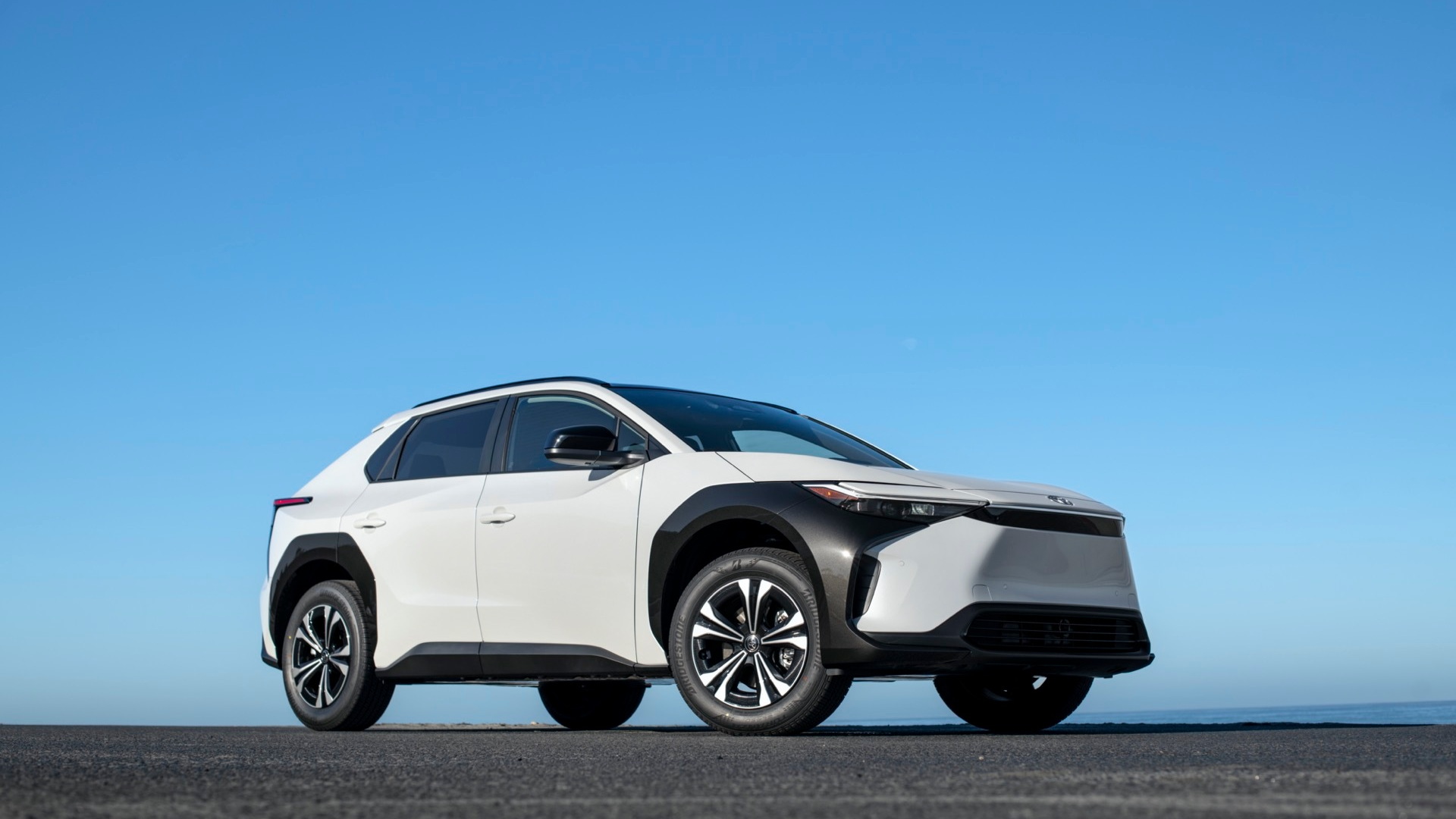 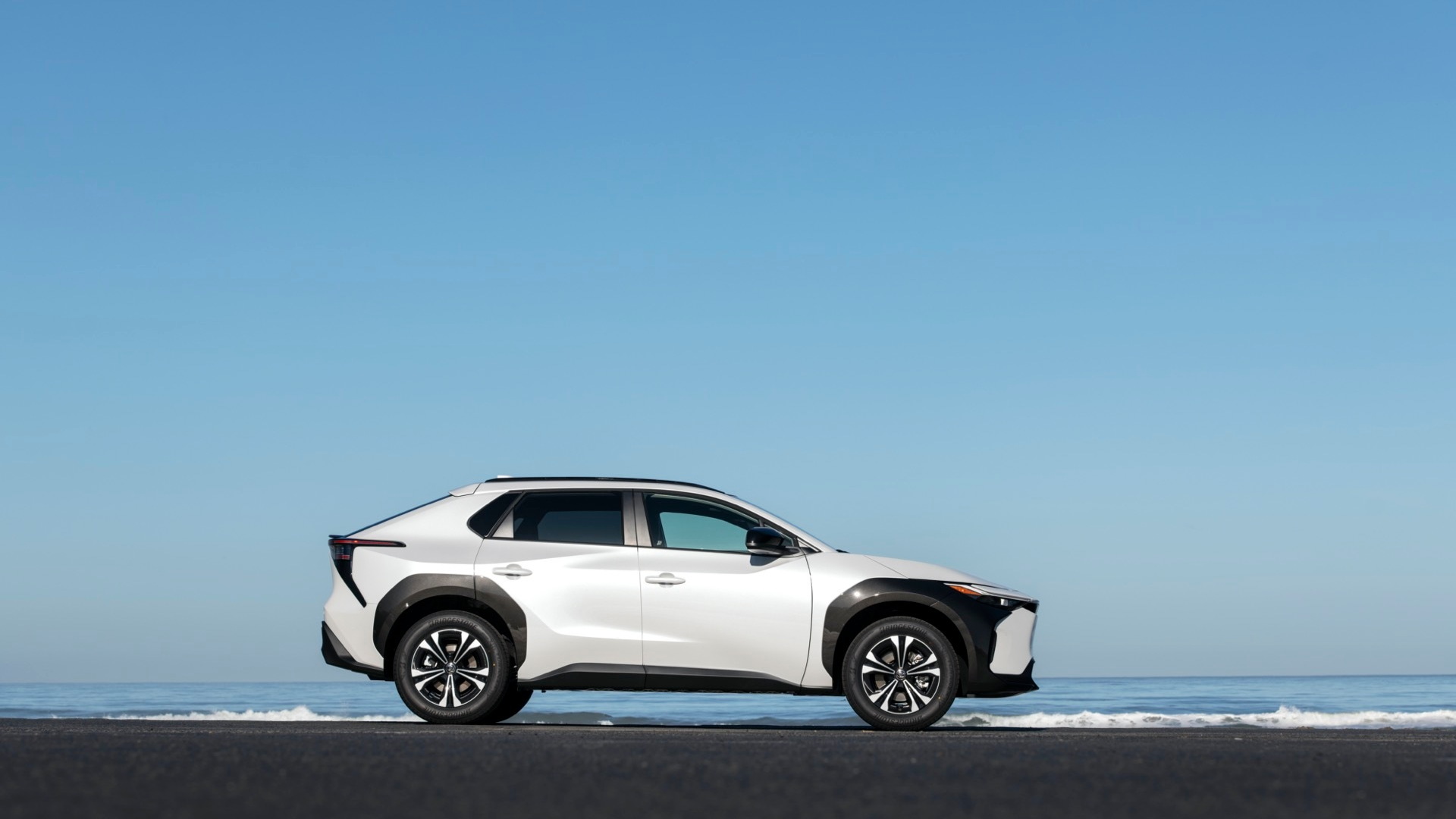 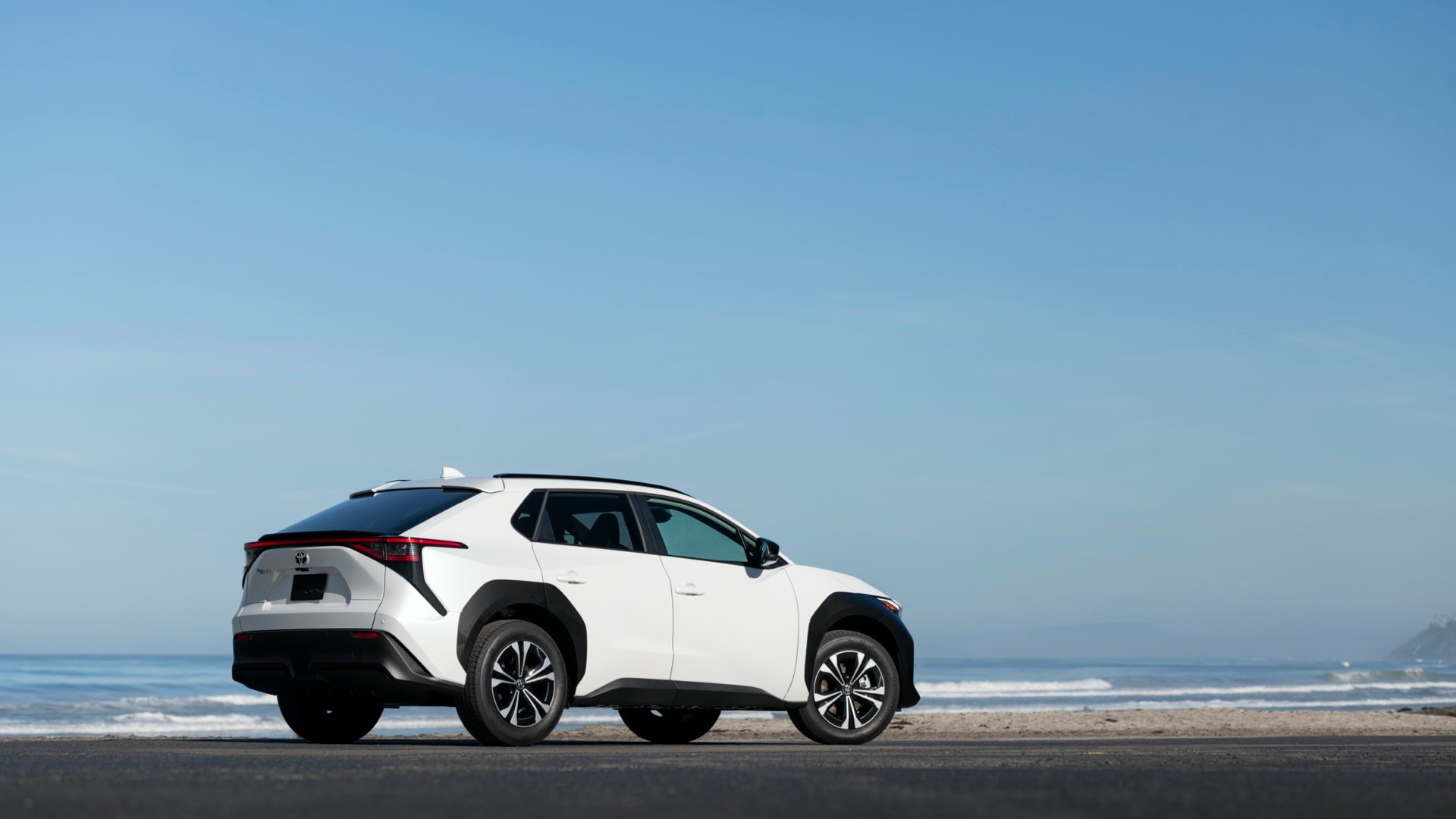 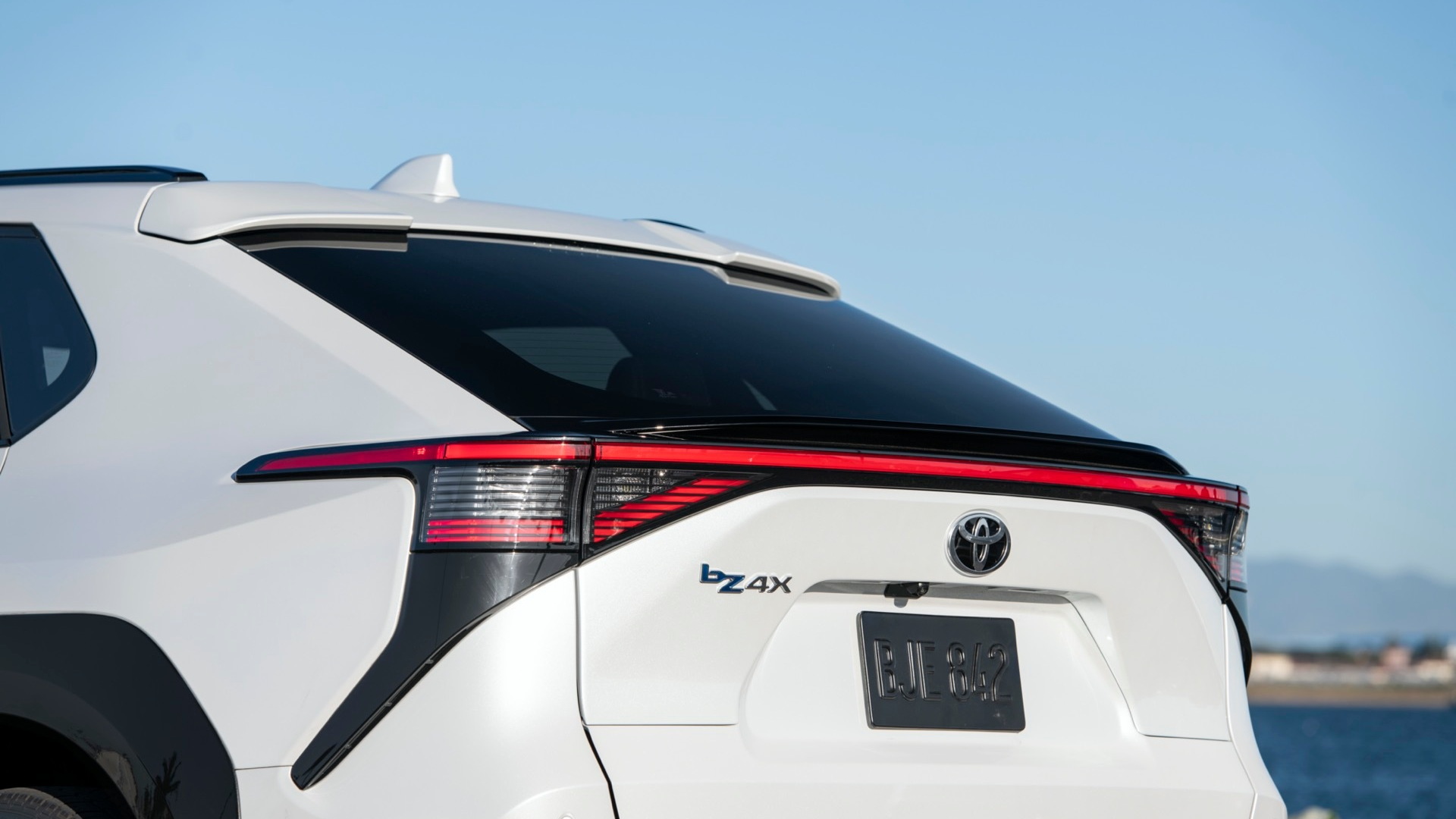 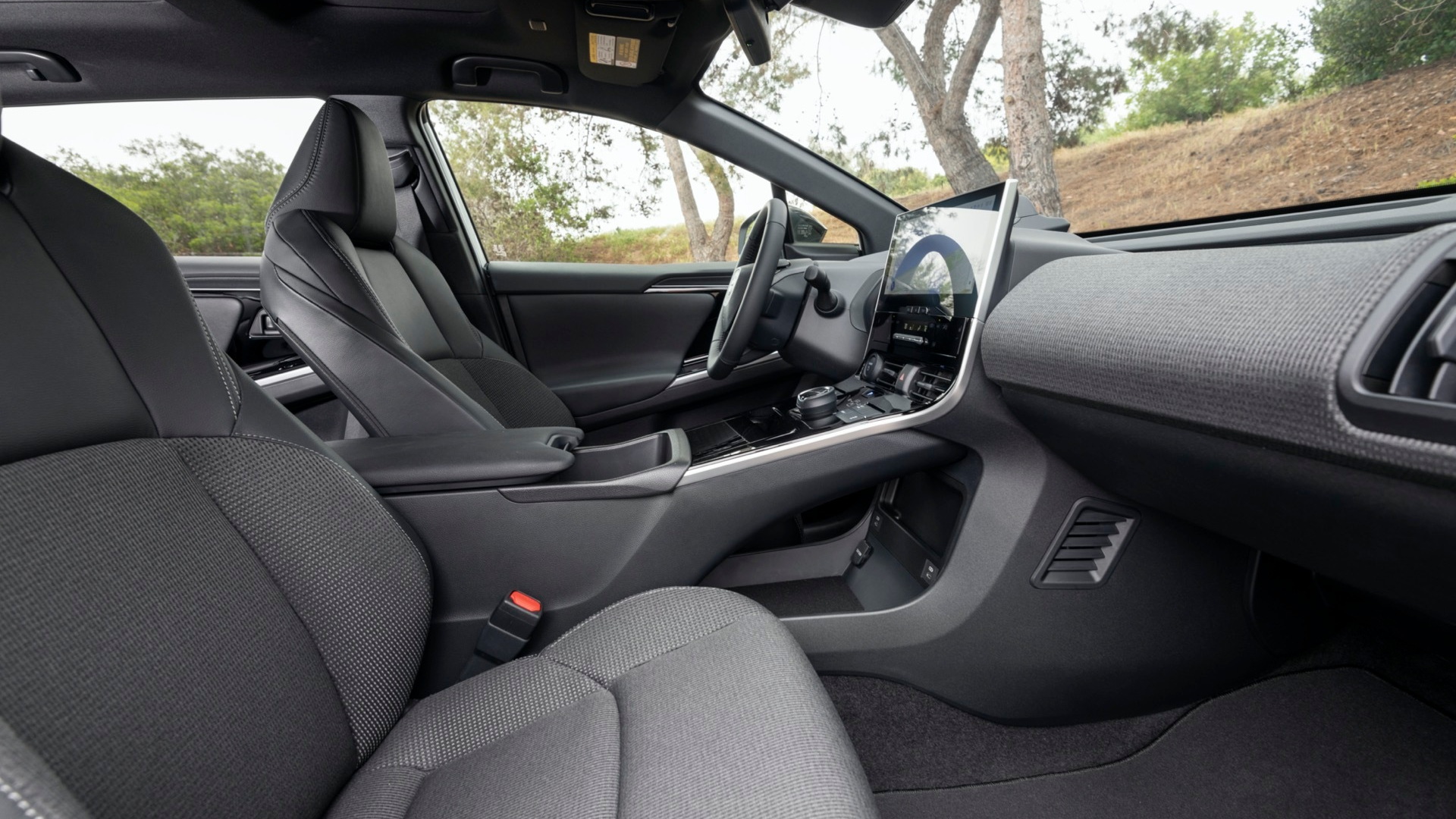 The 2023 Toyota BZ4X electric crossover is charmingly offbeat, and it seems to over deliver in nearly every way that might matter both to Toyota owners and those who want a no-fuss urban EV with trail cues.

The BZ4X, the first from a fully electric sub-brand around “beyond zero,” fits in a market sweet spot alongside the bestselling RAV4, with an off-road mode and available all-wheel drive, and a range of up to 252 miles.

So it surprised us to hear that Toyota only plans to deliver about 7,000 BZ4Xs through the end of 2022 in the U.S., with an emphasis on California ZEV states at first but no guarantee the pace will accelerate. While Ford looks at 200,000 Mach-Es for 2023 split between the U.S. and Europe, and VW eyes 100,000 ID.4s in the U.S. in the next year or two? Record-scratch moment.

Toyota has owned California in hybrid sales, and it’s hard to imagine it’s not looking at the 60,394 Tesla Model Y SUVs registered in the Golden State alone in 2021 and seeing that it could catch up.

To put it in context a bit, that’s a slower U.S. sales pace than the plug-in hybrid RAV4 Prime. And it makes a little more sense when you consider that hybrids are the profitable main-stage show that Toyota doesn’t seem to want to upstage—thus the BZ4X's starting price of $43,215 is above that of the base RAV4 Prime ($41,015)—or a loaded RAV4 hybrid.

Both of the plug-ins are eligible for the full $7,500 EV tax credit amount for just a few more months. And for the time being, they both upstage those models without charge ports. Sorry, Toyota.

As a recent drive of the 2023 BZ4X underscored, Toyota isn’t far behind industry EV leaders like Tesla in the aspects such as drivability, efficiency, and battery longevity that really matter for the popularization of EVs, even if it doesn’t measure up on road-trip charging convenience.

Single-motor model: An efficiency standout next to Tesla?

In my first drive, I noticed significantly better efficiency from the front-wheel-drive version, although I thought the best-driving of the lineup was the all-wheel-drive XLE version, with its 18-inch wheels. In this version, the BZ4X rode soft, but it felt no less coordinated when pushed near its limit than the Limited and its 20-inch multi-spoke alloys. The somewhat heavier Limited had noticeably more impact harshness over Southern California’s few-and-far-between bumpy road surfaces.

Official EPA efficiency and range figures haven’t yet been posted for the BZ4X, but Toyota anticipates an estimated 252 or 242 miles for front-wheel-drive versions (XLE and Limited versions, respectively), or 228 or 222 miles for those respective models in dual-motor all-wheel-drive form.

First off, by quick-take indications on my early drive, across three vehicles, the BZ4X has got it going on with respect to efficiency. Toyota anticipates that the single-motor version earns 119 MPGe combined—better than any version of the Hyundai Ioniq 5 or Kia EV6 (117 MPGe at best) and its efficiency-focused e-GMP platform, and only bested by the Tesla Model Y, at 122 MPGe.

I split the drive into three portions over the course of several hours—first an all-wheel-drive XLE, followed by a front-wheel-drive XLE, and finally an all-wheel-drive Limited. I put roughly 30 miles on each loop, mostly following the same suburban road loop—not representative of highway driving, but a mix of driving styles and modes on each. Essentially corroborating Toyota’s estimated efficiency, I saw trip averages of 3.6, 4.1, and 3.4 miles per kwh across the three respective models—suggesting a range of more than 290 miles for the front-wheel-drive model, at something well less than interstate speeds, or nearly 250 miles for AWD models in that scenario.

It was about the ideal environment for the cells. While I did use the climate control, the temperature was 63-70 degrees Fahrenheit through the course of the drive.

Built on the e-TNGA dedicated electric-vehicle platform co-developed with Subaru—and nearly identical to the Subaru Solterra—the 2023 Toyota BZ4X is about the same overall size (wheelbase and overall proportions included) as the Ford Mustang Mach-E, Tesla Model Y, Hyundai Ioniq 5, or VW ID.4. Like all those models, the BZ4X stretches the wheelbase and goes rakish with the crossover form.

But up close, inside, or behind the wheel, the BZ4X is clearly the product of some very different priorities—especially in terms of its interface, the overall ambiance, and the space inside.

On the outside, the BZ4X has a reasonably handsome profile that pulls you in with its thin lamps and sharp leading edge, but it gets a bit more awkward the longer you linger on some of the details. It impresses not as something clean-slate new, but as a Toyota wearing a little too much Subaru Wilderness cladding that rides higher and wider at the front wheels, which seems a strange choice.

Get into the driver seat of the BZ4X and it makes no attempt at the open, airy layout claimed in the ID.4 or stunning rethink of the Ioniq 5. Instead, its wide, rather high center console leaves a different first take. There’s a lot of space on, within, and below the console , but the initial impression I had sliding into the front seats is that it’s a lot more confining than its EV crossover rivals.

Turning a tech flagship into the “easy” EV

Inside, the design clicks once you contextualize it with a steering yoke—one of many features that turned heads in the global version of the BZ4X. But in the U.S. you won’t find the yoke or most of the features that called it out as more of a technology flagship on a global stage—such as the rooftop solar charging, the bi-directional charging, or the remote-control “Advanced Park.”

Instead of a tech focus, Toyota is emphasizing “easy” for the BZ4X in the U.S.—a word that makes a lot of sense in understanding this model and how Toyota sees it for America.

Go with it. If you’re the type to pile in with the family and not dwell too deeply on aesthetics, the BZ4X shows its strengths as refined, comfortable, and mostly space-efficient.

The BZ4X can look lower than the gasoline RAV4 from some angles, yet there’s lots of head room, and it’s easy to get in and out of the back seat without ducking your head. With the front seat adjusted for my long-legged 6-foot-6 frame, I found just enough knee room to fit fine in back. Toyota claimed that front and rear leg room are on par with the “medium segment SUV” set, and it sure feels that way. Toyota notes 42.1 inches of front leg room and 35.3 inches of rear leg room—as well as 27.7 cubic feet of cargo space behind the second row, which neatly flips forward for a flat cargo floor. There’s also a lower cargo space in back, good for charger-cord storage and then some.

There’s only one exception I found, in the driver’s seat. With a wide range of driver sizes present in our group of testers, nearly everyone seemed to have difficulties adjusting the steering wheel to a comfortable rake while also seeing the entire gauge cluster (which I did like placed far forward for focusing ease). Not having a steering-wheel rim would solve that…No yoke.

A quiet cabin to soften the daily grind

I got up to about 75 mph for a short time and didn’t find any issues with wind noise or road noise. The instrument panel is upholstered, which may play a part in damping cabin noise. The BZ4X tracks easily, with a rather large level of steering input needed to, say, change a lane quickly. That may help explain the three-point turns we had to make for photos as the BZ4X has an unexpectedly large turning circle—40.0 feet, according to Toyota, versus, for instance, the single-motor ID.4’s 31.5 feet.

The BZ4X is classified as a Small SUV by the EPA. Subaru’s X-Mode is included in all-wheel-drive versions, but we didn’t get any chance to experience its additional grip and stability in limited-traction situations—including snow, dirt, and mud.

The BZ4X lineup has Eco and Normal drive modes, with a regenerative boost mode that allows something close to one-pedal driving—albeit with idle creep that leaves it clearly up to you to apply the brakes in the last few feet of a stop. It’s a physical button. So is the Hold button that allows you to, once stopped, stay there until you push the accelerator again.

One thing we didn’t warm up to: Toyota has seized the opportunity to redesign the shifter again—an unnecessary exercise. You won’t find the one that’s used in the Prius here, or the one from the Mirai; this one’s mostly a grab-and-twist affair, plus a button to push for Park.

Some unnecessary complications—but thanks for real buttons

The 12.3-inch touchscreen system looks great, but I still didn’t feel like I had the hang of the menu structure after a few hours in several versions. Luckily it’s compatible with wireless Apple CarPlay, Android Auto, and Amazon Alexa, so you might spend most of your time in your own familiar ecosystem. The BZ4X includes one larger USB-A port in the center console plus four USB-C ports (2 front, 2 rear). The center console also has a space for a smartphone, including a wireless charging pad plus a semi-transparent lid.

The BZ4X is also the first Toyota vehicle to debut the company’s Toyota Safety System (TSS) 3.0, which gets serious hardware upgrades as well as upgraded active safety features. With a wider detection range for the millimeter-wave radar and camera system, it adds low-light cyclist detection, motorcyclist detection, and guardrail detection to its pre-collision functions, as well as improved lane recognition. In addition to automatic emergency braking, active lane control,blind-spot monitors are also standard, as well as a system that warns exiting occupants when a vehicle is approaching from behind the car.

A Weather Package (price not yet announced) is offered on either model. On the XLE it brings a heated, leather-trimmed steering wheel and heated front seats, while on the Limited it adds a front radiant foot-and-leg warmer that might help add to efficiency and range in cold-weather trips. Both versions come with remote-services compatibility for climate preconditioning, charge planning, and a Toyota payment system for public charging networks.

Toyota has partnerships with EVgo and ChargePoint, with the latter its partner for home hardware—and the full cross-compatibility with its own app, even though you can use whichever Level 2 home hardware you want. Buyers will be able to use Qmerit home installation services, harnessing a national network of electricians well-versed on such tasks.

Toyota has said that it’s targeting just 10% range degradation in 10 years—although its warranty for the BZ4X will be 8 years or 100,000 miles for the battery, as well as 3-year/36,000-mile comprehensive and 5-year/60,000-mile powertrain warranties.

Road-trip DC fast-charging isn’t as speedy as most in this class, but if you occasionally need a boost on weekend trips it should be fine. The front-wheel-drive model is capable of charging to 80% in about 30 minutes. Because of the difference in battery packs, the front-wheel-drive versions can fast-charge at a peak 150 kw, while the all-wheel-drive versions charge at a peak 100 kw. Level 2 charging at 6.6 kw will take about 13 hours.

The BZ4X is indeed easy. What’s not easy—at least from my first experience with the BZ4X—is its interface. Or to understand how the brand sees so few of its hybrid customers wanting to shift to an EV like the BZ4X. To steer shoppers back to the hybrid headliners, which it sees as 70% of the market in 2030—is going to take some creativity.

Toyota provided travel and lodging to bring you this firsthand review.