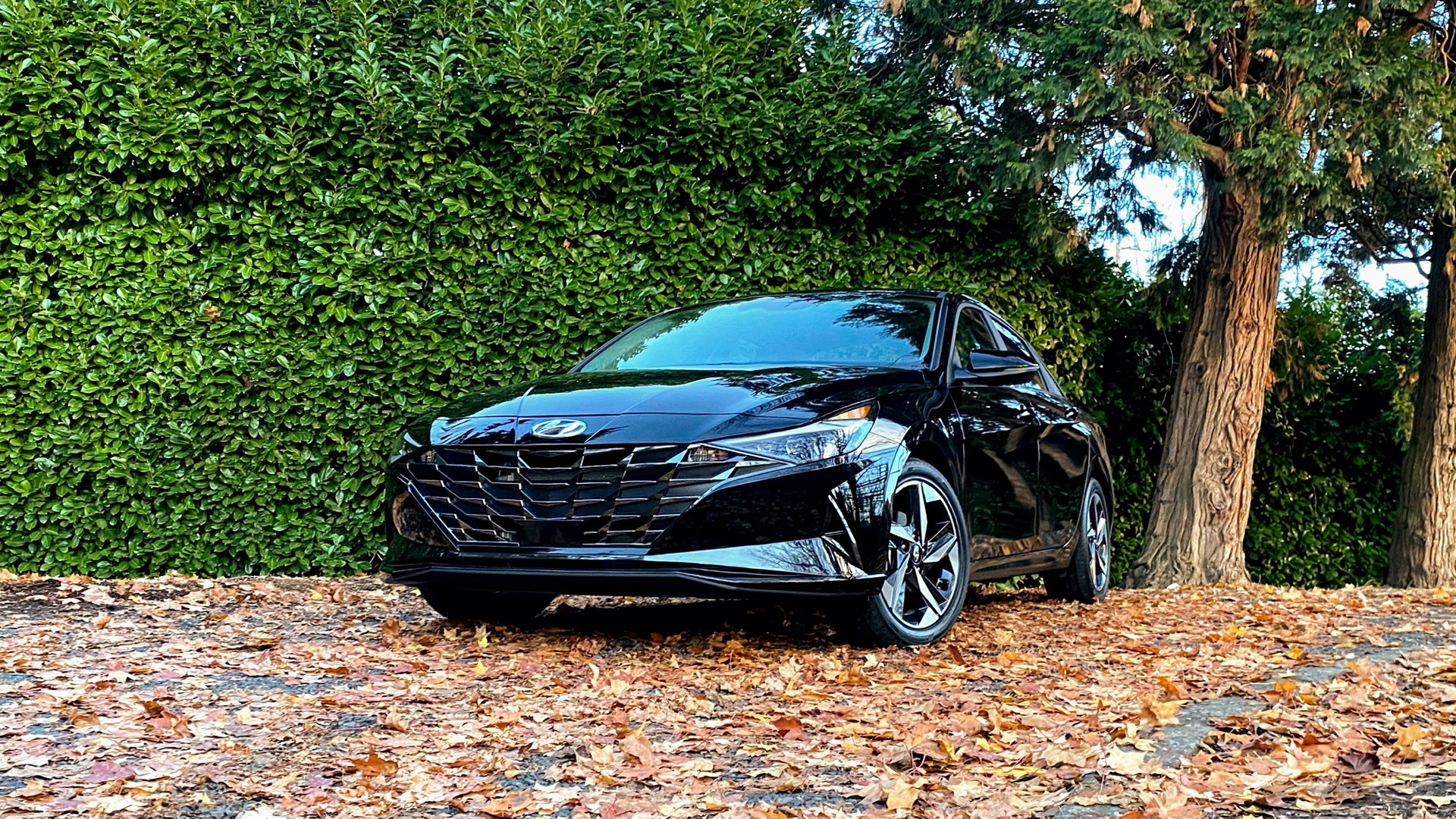 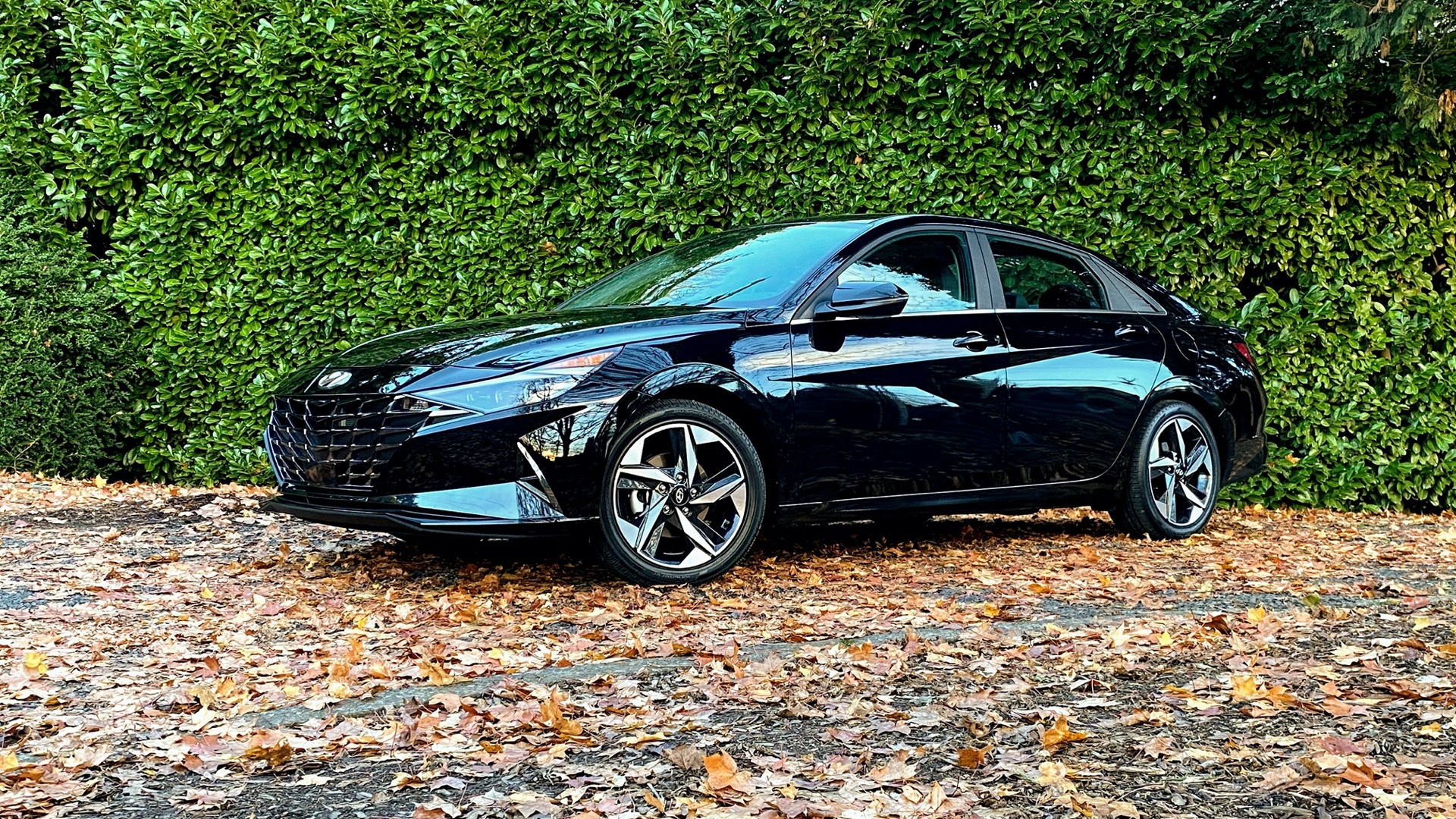 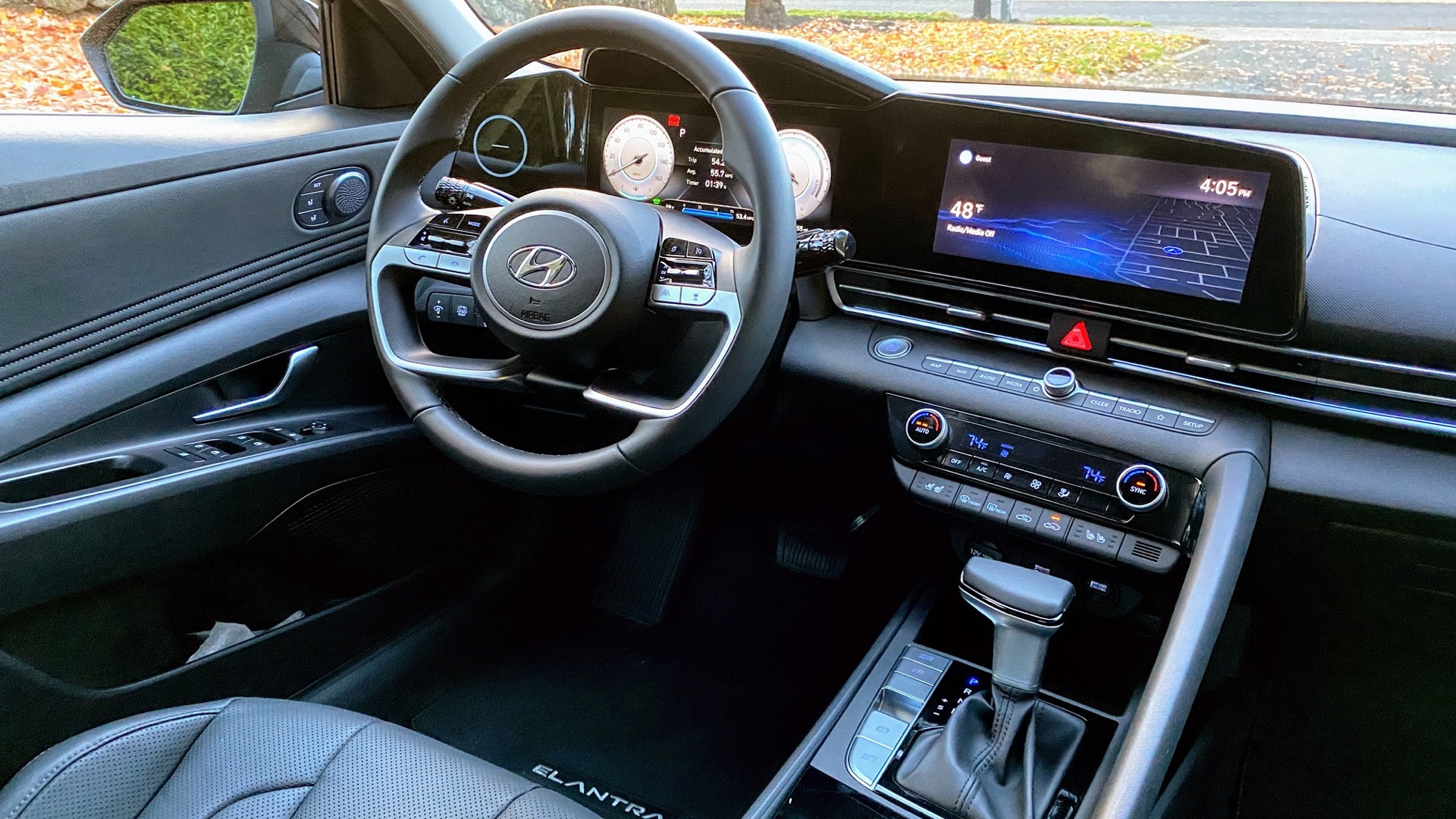 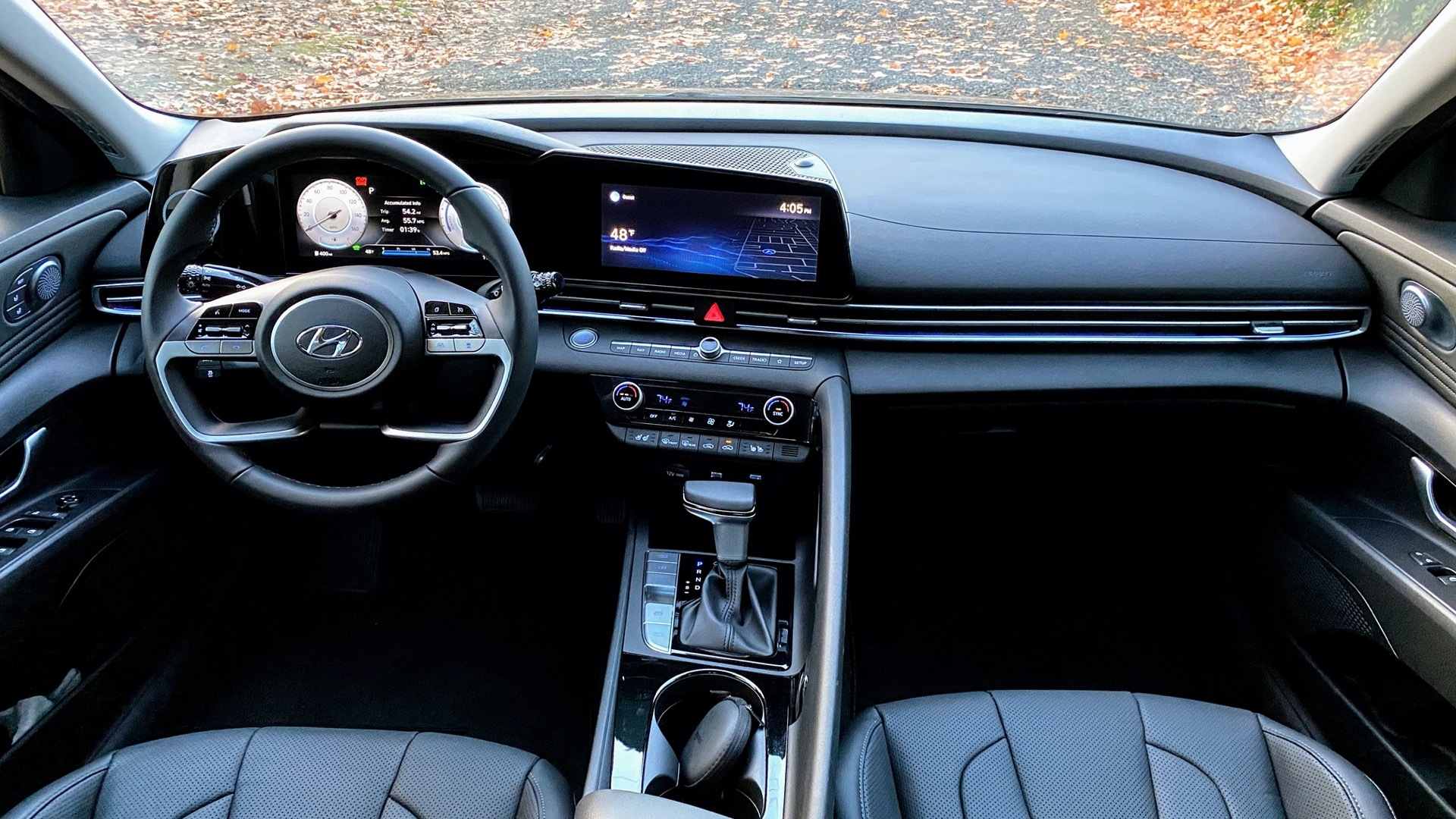 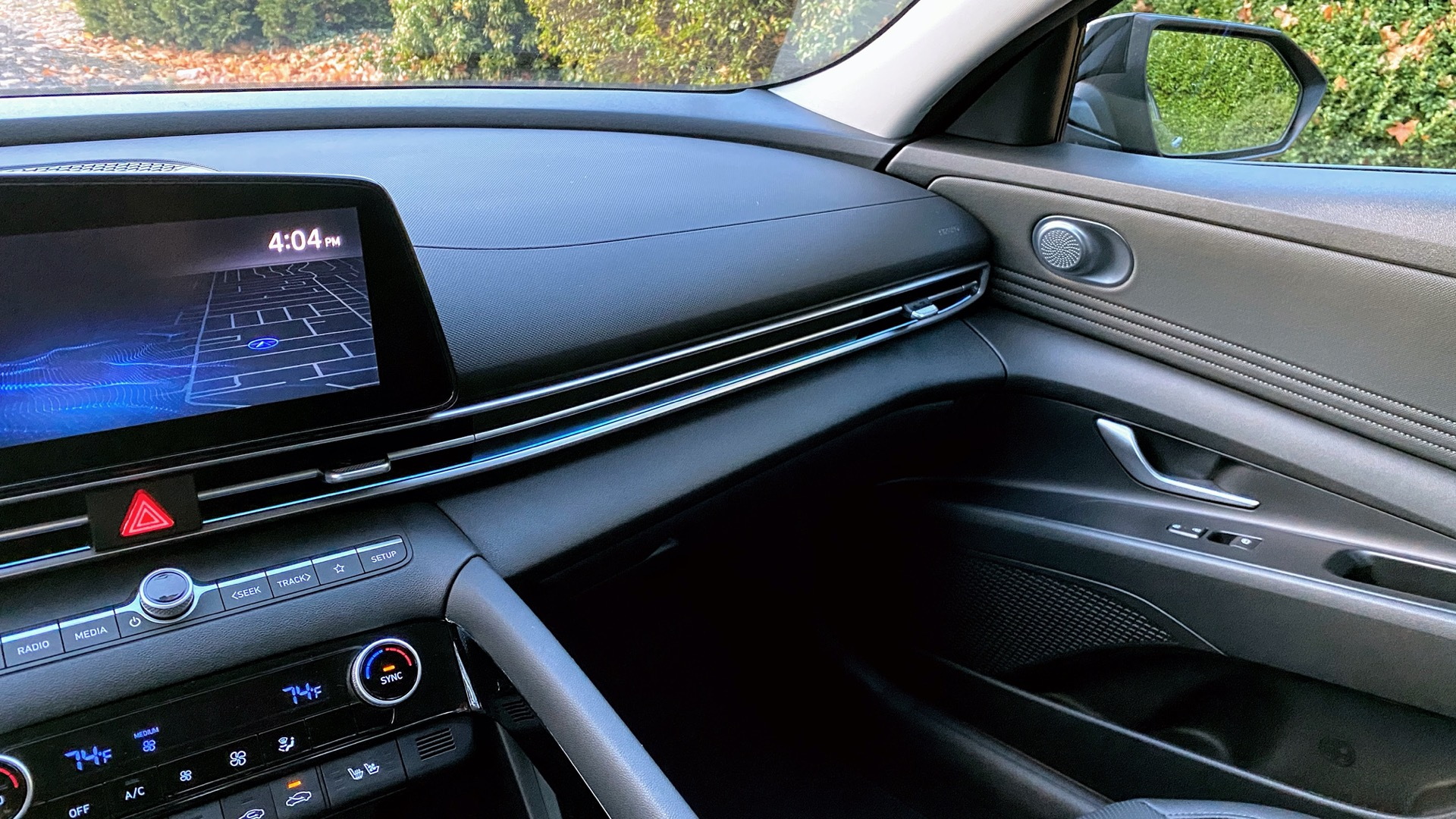 A few hours with the 2021 Hyundai Elantra Hybrid earlier this month left me with some wildly conflicting first impressions.

At first look, the Elantra appeared and felt refreshingly different in many ways—especially when you compare it to other members of the 50-mpg club, like the Toyota Corolla Hybrid, Honda Insight, or even Hyundai’s own Ioniq Hybrid. And as I lingered on all of its interlacing cues, I wondered if I would feel at ease with it day in and day out. Did they over-egg the pudding?

That was before even hitting the start button and driving. But I’m getting ahead of myself here, because the big story is that for the first time the Elantra Hybrid not only exists but is rated at up to 54 mpg combined. Even in the crème de la crème form I had—the Limited—it achieves a combined 50 mpg (49 mpg city, 52 highway).

Reassurance on the mpg ratings

Over the course of a half-day with the Hybrid Limited, I covered 120 miles, with a near-equal mix of city, freeway, and country-road driving, and averaging a commendable 51 mpg, according to the trip computer—right in sync with the EPA ratings.

I also took the Elantra Hybrid on a 53-mile out-and-back loop that I’ve done with a wide range of hybrids, making sure that I start with the battery around the middle of its capacity, and the climate control set to 72 degrees. It includes a near-equal mix of roughly 60-mpg freeway driving, suburban boulevards, and rolling country backroads that tests how well hybrids can bank energy in the battery—with altitude going from 300 feet up to 1,000 feet and back down.

On that, I averaged nearly 56 mpg. While that sounds great, take note that I averaged just over 56 mpg earlier this year in the much bigger and heavier Sonata Hybrid on the same route.

The key difference between the two hybrid sedans as I perceived it? The Sonata Hybrid coasts when you gently lift off the accelerator at highway speeds, whereas no matter the mode, the Elantra Hybrid would decelerate lightly to moderately in that same situation. I also saw more electric-only operation at those country-road and freeway-commute speeds in the Sonata Hybrid than in the Elantra Hybrid.

Other than using a downsized engine and motor versus the Sonata Hybrid, the Elantra Hybrid uses a completely different version of Hyundai’s hybrid system—with a 6-speed dual-clutch gearbox instead of a conventional 6-speed automatic transmission.

An improvement on Ioniq Hybrid

The Elantra Hybrid has the same layout that Hyundai already uses in the Ioniq Hybrid—a 1.6-liter Atkinson-cycle inline-4, plus a 43-hp electric motor—and its 139 horsepower and 195 pound-feet are identical to that used in the Ioniq Hybrid.

Beyond this, it feels as if Hyundai’s done a whole bunch of calibration and control work that makes this system react quicker, shift smoother, and just do as it should—and with the Ioniq’s hatchback body style potentially more appealing to some, we hope Hyundai applies all these changes. With the Elantra Hybrid’s system you hear the revs rise and fall, punctuated by shifts, but you don’t feel them or notice any interruption in power flow, as the electric motor generally erases the vibrations and pauses.

The few uncouth pieces that remained only showed up occasionally—like when the system momentarily didn’t want to deliver the power we needed to accelerate out of an uphill ‘L’ bend in the road, and the same shudder at boulevard speeds when the electric motor comes back into the mix that my colleague Brian Wong noticed in his first drive of the Elantra Hybrid.

Compare this to the rubber-band feel of Insight or the oddly detached driving experience of the Prius, and there’s a lot of upside to this setup. Launches from a standing start feel much more confident than they do in Ioniq, and seeing a next-generation version of this system tuned for performance no longer seems like a silly idea.

Taking in the spectacle

Now that I’ve obsessed over the hybrid system a bit, back to the rest of the car: The 2021 model year marks the most daring, dramatic redesign given to this compact sedan ever. Its swoopy, flowing silhouette makes the Elantra look longer and lower than it is. Aggressive creasing and sculpting from its sides around to the rear give it a look pulled from an art sketchbook—especially so in my test car’s mirrorlike Phantom Black finish, which sent an almost kaleidoscope view back to my camera no matter what. Yes, you might be driving a sub-$30,000 sedan, but the look is loud enough to draw eyes from social-distance-safe distances.

Inside, the Elantra is equally ambitious, but in a very different way. While the design is cohesive and artful, and the materials about par for this set of vehicles, I got the impression that in quite a few instances, function has been sacrificed for form and design. The instrument panel is now all-digital, and it smacks of being a “skin” that a designer chose to match the interior theme, not one chosen for functionality or readability. The right side of the center console is a tall barrier, narrowing the passenger space to some degree, and it’s not clear whether it’s a big grab handle or simply in the interest of the design. And around where the front pillar, the dash, and the front of the door pillar meet, there’s a whole lot going on. In all, it reminded me of the equally radical redesign given to the Sonata exactly a decade ago—a redesign that was flawed in many ways but succeeded in elevating the Sonata to the next level, next to Camry and Accord.

Less delightful in how it cruises and corners

It wasn’t just the design overtures made by this Elantra Hybrid; unfortunately it also reminded me of that previous Sonata in the way it lacked polish in its ride and handling.

Like the Ioniq, the Elantra Hybrid also trades the Elantra’s torsion-beam rear suspension layout in for a multi-link setup, which generally promises better handling on imperfect surfaces.

That’s the idea, but with the Honda Insight in mind as the benchmark in this class, I was disappointed with the way the Elantra Hybrid rode and handled. My Elantra Hybrid Limited test car, with 17-inch wheels on rather low-profile tires, exaggerated every ripple in the road without corresponding advantages to handling. In its default setting, the steering felt vague and wander-prone on center—albeit more satisfying in Sport-mode driving on a curvy road. And out on the highway, there seemed to be more cabin boom inside over coarse surfaces than the previous-generation (non-hybrid) model or other present rivals.

Front seats, for all their heated-and-cooled climate-comfort wizardry in the Limited, are thin on padding. Hyundai boasts best-in-class rear-seat leg room for the Elantra family, and while I couldn’t sit upright comfortably in the back seat. It has a lot to do with the rake of the seatback and the tapering headliner, and even though the Toyota Corolla has less head room by official measurements, I do fit in that model.

The Limited test car, at $29,095, including things like power front heated/cooled seats with memory settings, and a big, high-contrast 10.3-inch touchscreen infotainment system—that perplexingly deletes the wireless Apple CarPlay and Android Auto you get in other models, although you can still get to it with a cable connection. Funny, there you get wireless smartphone charging. The Elantra Hybrid also comes with a Highway Drive assist system that links adaptive cruise control and active lane control systems, automatically adjusting the set speed if the limit changes.

In this maze of conflicting impressions, would I recommend an Elantra Hybrid over an Insight or Corolla Hybrid? To sum, the Hyundai has better hybrid-system drivability in the kinds of use patterns, like freeway commutes, that Americans are likely to have. It also loads on the features and, going by a feature punchlist, value for money. As for its ride and handling, take the Hybrid SEL out for a drive if you can; I haven’t and am guessing that its 16-inch wheels and tires might help make a difference. And finally, do let design be your guide: If you like what you see here, in a 50-mpg car, the answer is yes.