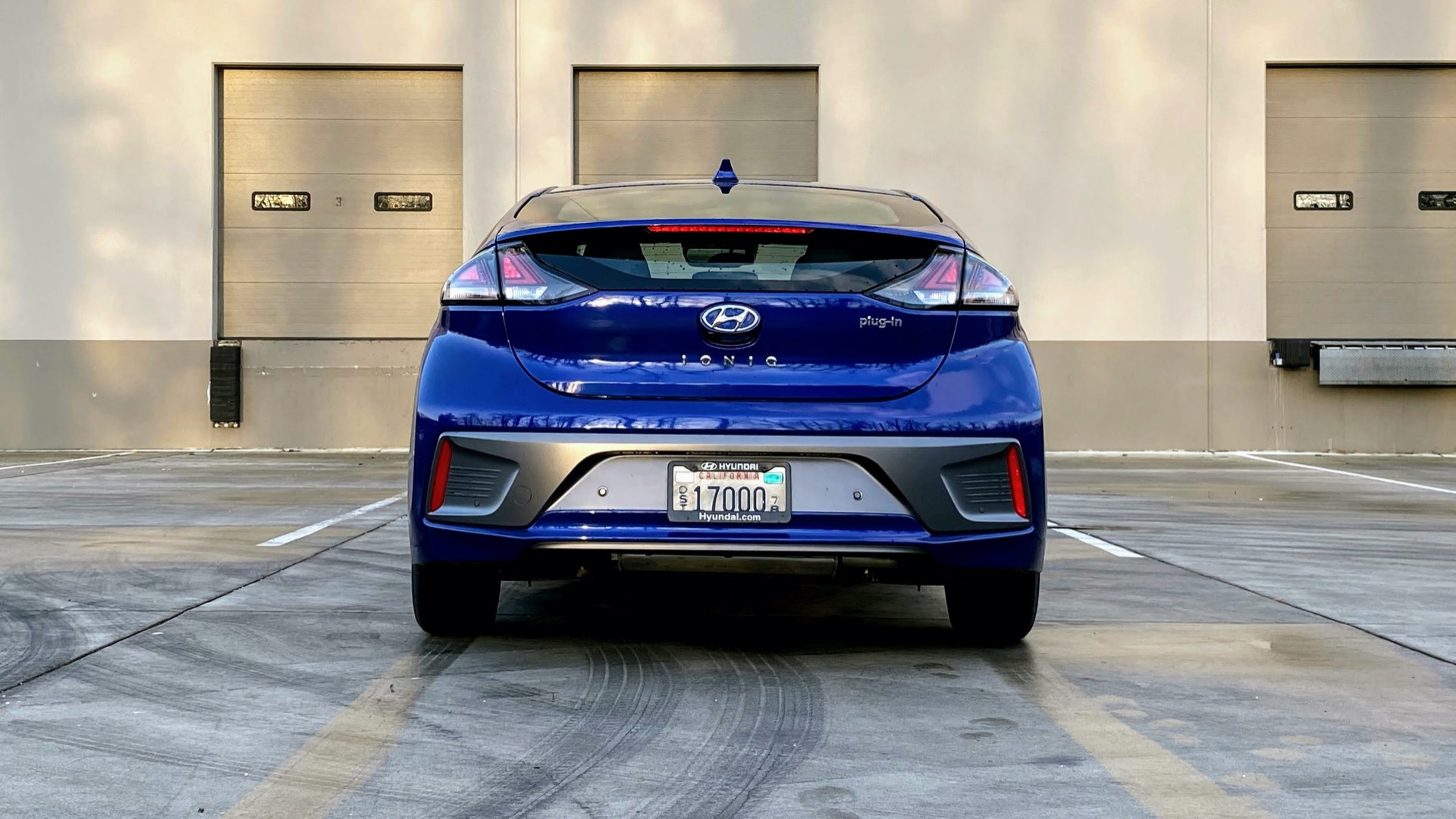 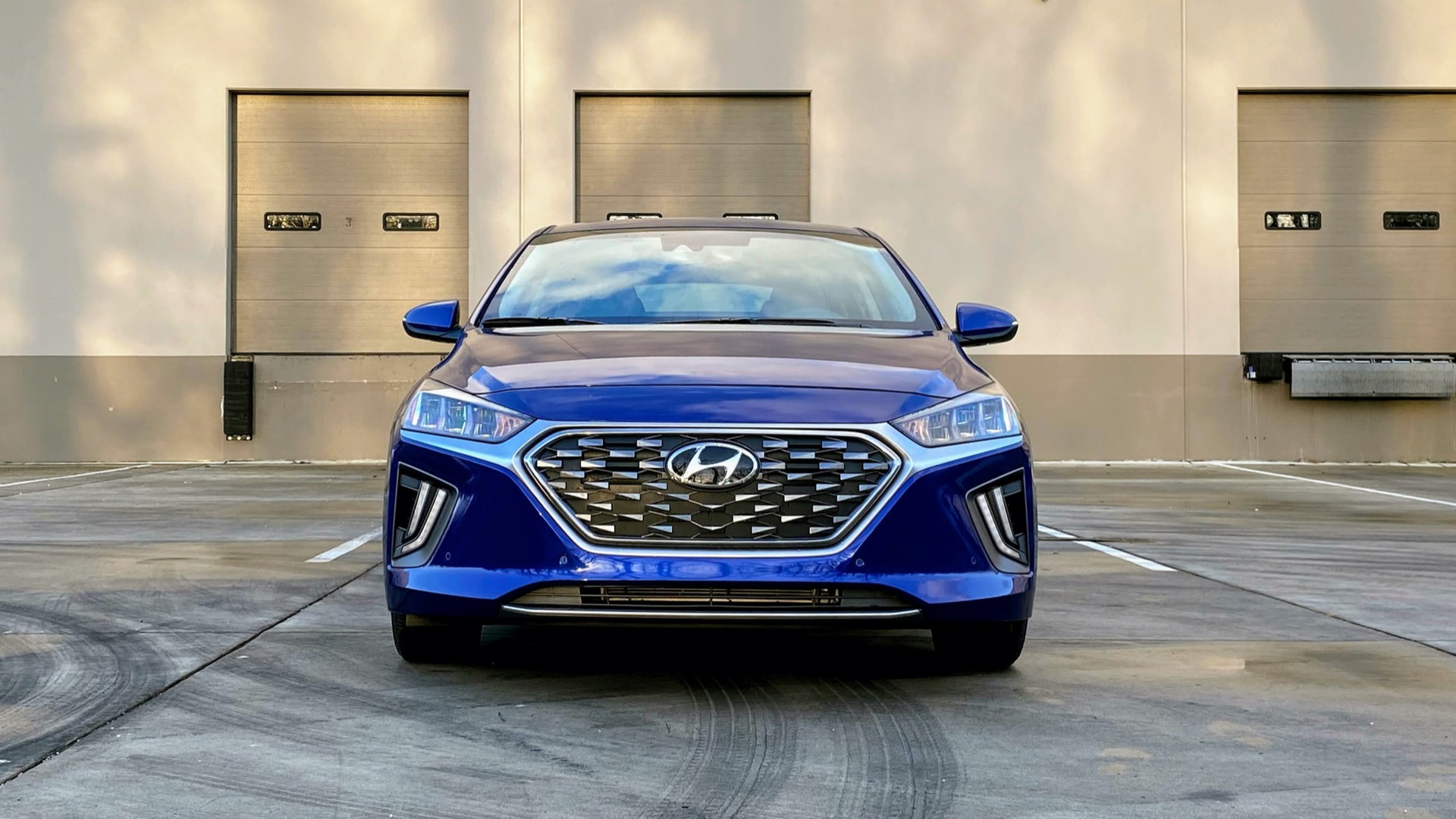 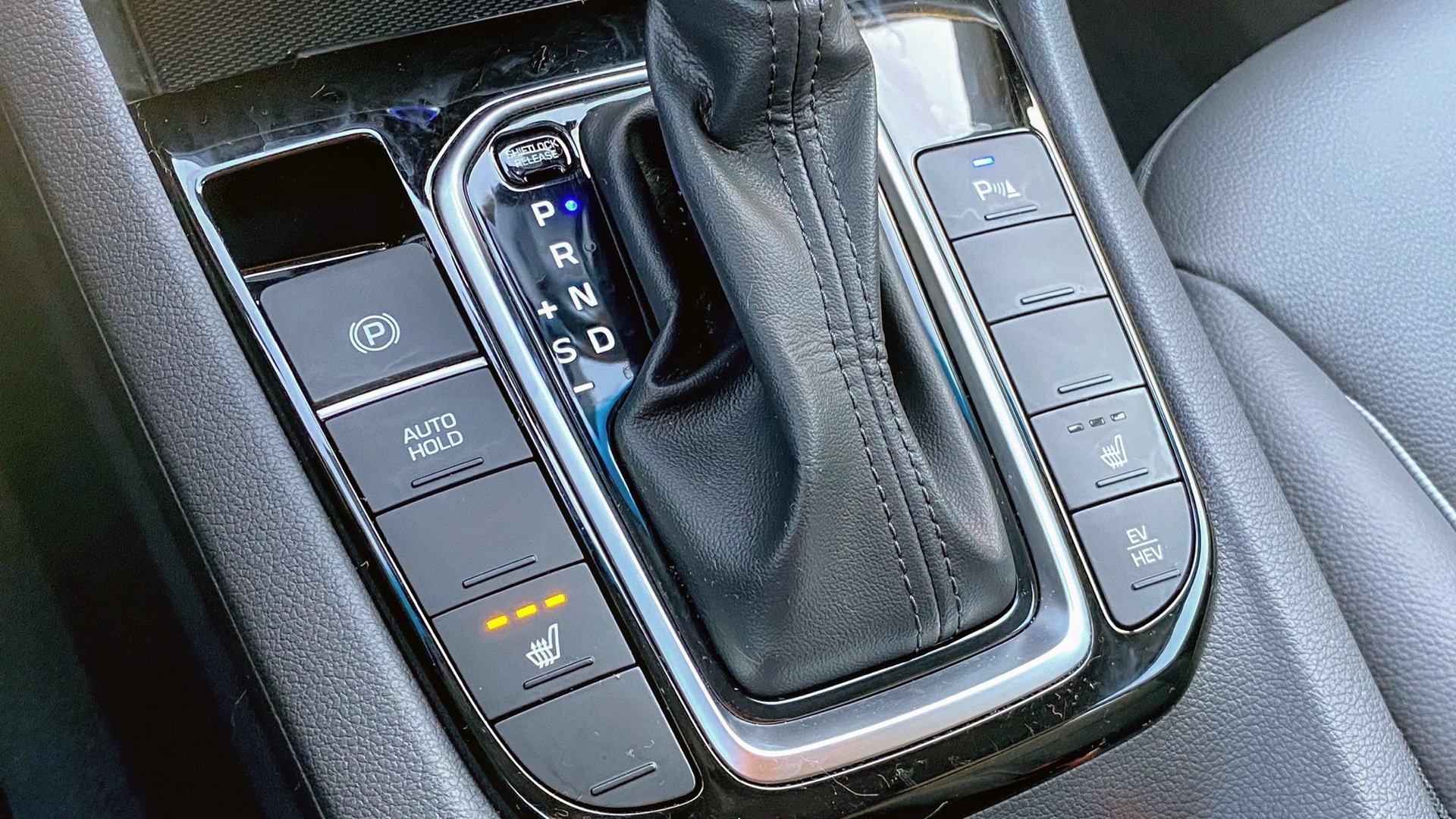 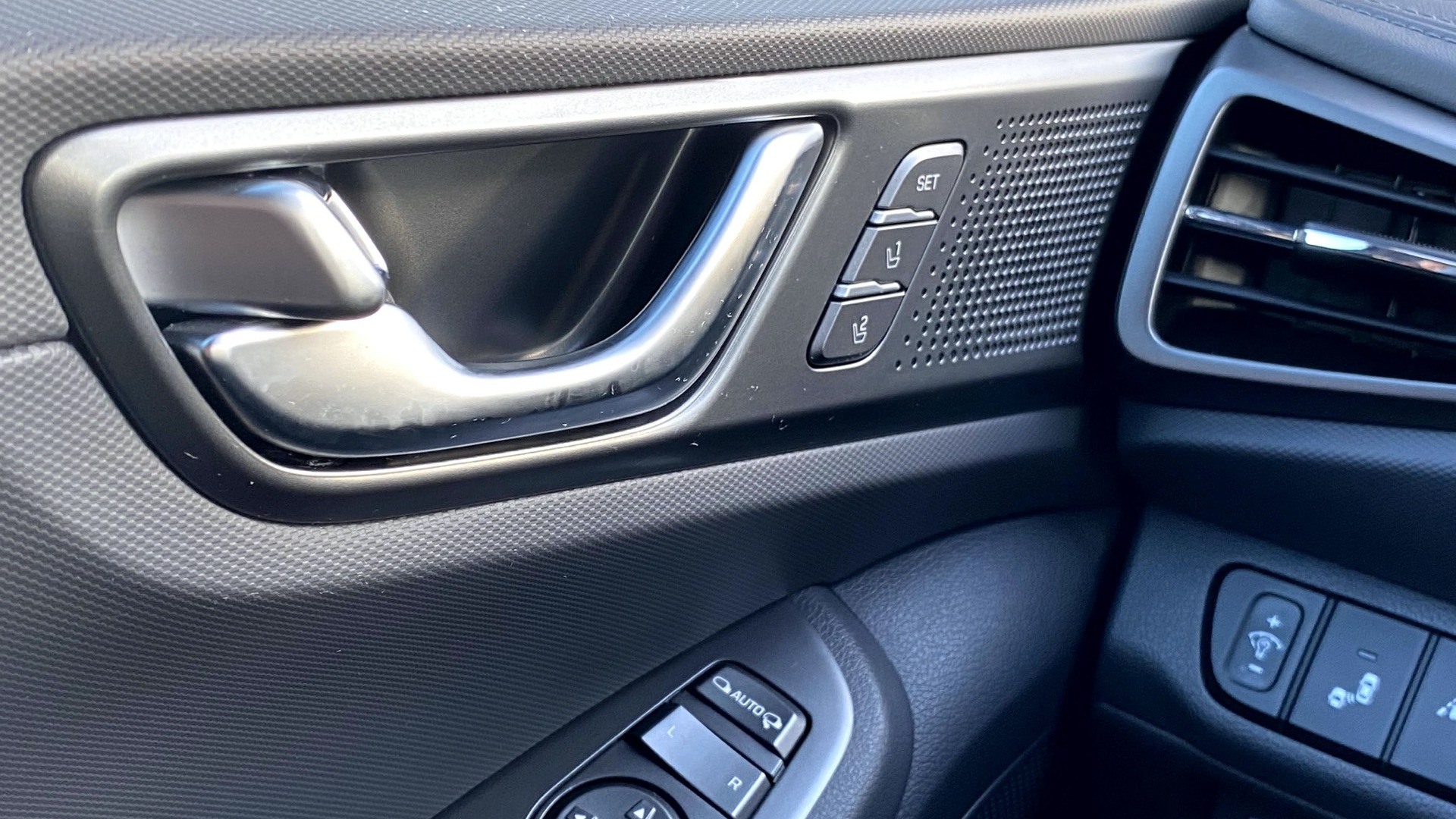 The Hyundai Ioniq Plug-In Hybrid offers a different kind of experience than other PHEVs. Perfectly pragmatic to some, confounding to others, it’s one that might allow drivers to top 40 miles all-electric in mild temps and lower-speed commute conditions, based on what I saw, but one in which four-seasons all-electric commuting is really out of the question.

After fully charging the Hyundai Ioniq Plug-In Hybrid hatchback, I headed out for a cross-town errand well within the 27 miles of electric range displayed on the center screen suggested I could do with energy from the battery.

But the moment I started driving, the engine started, a rather jarring interruption to the quiet of the electric motor.

It was 52 degrees outside and lightly raining, and I had turned on the climate control to keep the windshield clear and warm up the car a bit. With no resistive (electric) heater, the Plug-In Hybrid needs to start the engine for that—and with the battery full, it’s not entirely clear if the engine is used for anything other than its “waste heat.”

After a brief attempt to push on without the climate control (it fogged up quickly), I relented to the car’s logic and let it cycle the engine on a few minutes at a time—powering the car when it was running, and using a small fraction of the charge.

Even when you don’t need to heat the cabin, there are other indications that Hyundai sees the Ioniq PHEV as a hybrid that plugs in, rather than a vehicle that provides plug-in (electric) driving or hybrid driving, independently.

A reality check on wants and needs

Other plug-in hybrids such as the Toyota Prius Prime, the late-and-great Chevy Volt, or most PHEVs sold by luxury brands,  provide a mode to essentially lock the gasoline engine out, given enough charge. Hyundai doesn’t do that with the Ioniq PHEV. It makes those hardware and software decisions without allowing much input from the driver. Simply put, it feels as if it wants to be in charge.

Marketing for the Hyundai Ioniq Plug-In Hybrid boasts, “Electric when you want it. Gas when you need it.”

That tagline now sounds unfortunate. If your idea of a plug-in hybrid is one in which you want a short daily commute free of tailpipe emissions and need the gasoline for longer trips on the weekends—or because you don’t have charging access at home—you might be a little disappointed. But if you charge when you can and just let the car balance those wants and needs, your gasoline consumption will go way down.

The front-wheel-drive Ioniq PHEV is powered by an Atkinson-cycle 1.6-liter inline-4 and a 60-hp permanent-magnet electric motor mounted at the input shaft of the transmission, making 139 hp altogether. With a separate clutch for the engine, both the engine and the motor can be taken in or out of the mix when needed.

Even in its default Eco mode, with plenty of plug-in charge, the Ioniq PHEV starts up the gasoline engine if it thinks you need more torque than the electric motor can deliver through its gearing. The frustrating part is that this point isn’t always in the same place in the accelerator’s travel.

Hyundai has told us that the system will decide to start the engine depending on torque demand, driveline load, or even how quickly the accelerator pedal is being pressed.

Luckily the rain let up later in the week and I’d learned to temper my right foot and keep the engine off. With outside temps clear and 44 degrees, I shut the climate system off, turned up the heated seat, and periodically cracked the passenger-side window to keep the windshield from fogging up. The route was essentially the same one I’ve taken with a number of plug-in hybrids—8 miles on the freeway at roughly 65 mph, another 8 miles on a 50-mph road with occasional stoplights, then the rest of the route on a 30-mph street with more frequent stoplights. As such, the Ioniq PHEV went a stellar 34 miles before starting up the gas engine.

Then to see what the Ioniq PHEV can do in its hybrid mode, I set the heat to 72 and took it on the gently driven 53-mile out-and-back driving loop I’ve done in a number of hybrids, including about an equal mix of freeway, suburban, and rolling country roads, with altitude rising from 300 feet to 1,000 feet then back. According to the trip computer I averaged 56 mpg—the same as a few weeks earlier on the same route in the Elantra Hybrid.

At 3,300 pounds, the Ioniq PHEV weighs about 200 pounds more than the Ioniq Hybrid and 300 pounds more than the Elantra Hybrid. The Plug-In Hybrid’s ride is just right for the mission—and quiet enough at highway speeds—while it handles better than a Prius Prime. Along with it, when you encounter a sportier road and switch over to Sport mode, steering wheel heft firms up a bit and shifts provide sounds and sensations that are reassuring to those coming from gasoline vehicles. Revs ride, shifts happen, and it all feels timed right.

The Ioniq PHEV has enough space in back, but the seats are flat and rather hard—potentially the consequence of sitting partially over some of the battery hardware.

Over about 60 other miles in the Ioniq Plug-In Hybrid, I drove like a commuter would, in a mix of conditions slightly favoring freeways, and averaged 46 mpg.

The interface here is very simple. If you have a charge, you can also press the HEV button, which puts the portion of the battery for plug-in operation aside for later and runs the Ioniq as a hybrid.

More for California than Europe

There’s no charge-restoring mode in the Ioniq Plug-In Hybrid either (in U.S. versions); and that’s fine as such modes, usually configured specifically for Europeans aiming to travel on the high-speed motorways but save the electric driving for urban centers, rarely save any fuel or carbon emissions overall.

In its all-electric mode, the Ioniq Plug-In Hybrid will cruise at the 70 mph that’s all-important for U.S. freeway commuting, and with its climate-control’s cooling system electrified it seems perfect for California use. Just spare the heat if you want to run on electric.

As equipped, the 2020 Ioniq PHEV Limited cost $34,040, including a $955 destination fee. A 2021 model—arriving soon to dealerships—would be identical in equipment, Hyundai has confirmed, although the color palette has changed. It’s eligible for a federal EV tax credit of $4,543, as well as state incentives in some cases.

This follow-up with the PHEV reminded me what an efficiency leader this model line is. Getting 29 official EPA miles—or 34 miles, as we saw, in chillier weather—from such a small 8.9-kwh battery pack, with a chunk of that capacity reserved for hybrid operation, is impressive.

Hyundai isn’t by any means done with plug-in hybrids. It has already revealed two new PHEV SUVs this past year—a Tucson Plug-In Hybrid and a Santa Fe Plug-In Hybrid.

Although the future of the Ioniq PHEV might be limited, with the pending launch of Hyundai’s new Ioniq EV brand, it’s likely that Hyundai’s next-generation plug-in hybrids will stay truer to the company’s own wants-and-needs mantra.